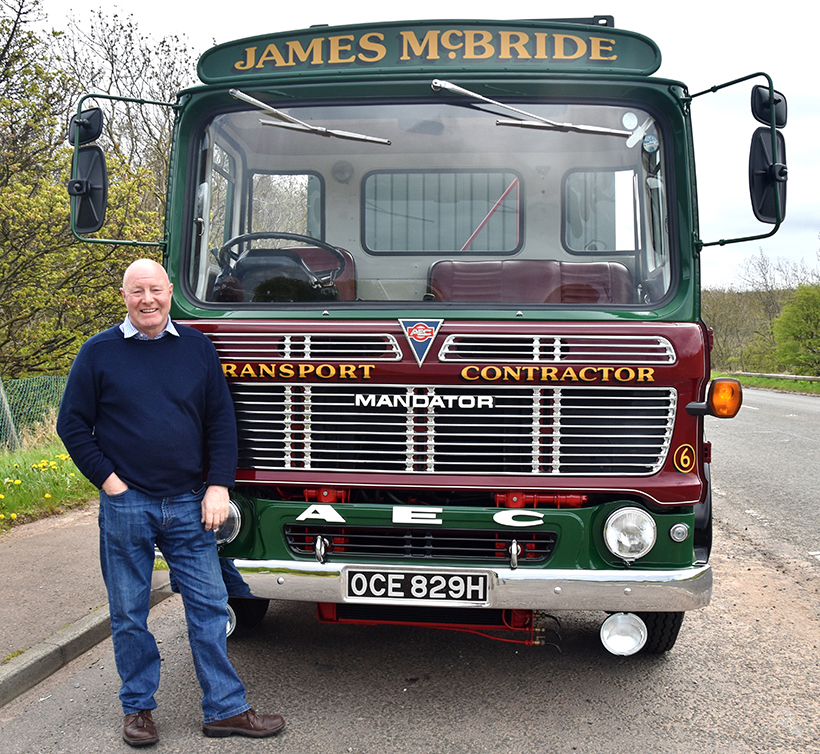 Brian McBride and his V8 Mandator; he’s been driving lorries for most of his life.

The twin-axle, 1960s AEC Mandators were the product of Leyland’s takeover of AEC in 1962. Like other models in the AEC catalogue, the Mandator was equipped with Leyland’s Ergomatic cab. Later models were fitted with either a six-cylinder engine or a powerful V8.

The Mandator name, however, first appeared much earlier, in 1931. The original Mandator was aimed at haulage firms looking for a low-height chassis vehicle to carry machinery. Several removal companies also used them as furniture vans.

By the 1960s, the Mandator MkV (G4) was fitted with a Park Royal cab, and the twin-axle tractor model sold in large numbers. This was replaced in 1966 by the type TG4, featuring an Ergomatic tilt-cab. These powerful lorries were modern in design and equipped with good brakes. 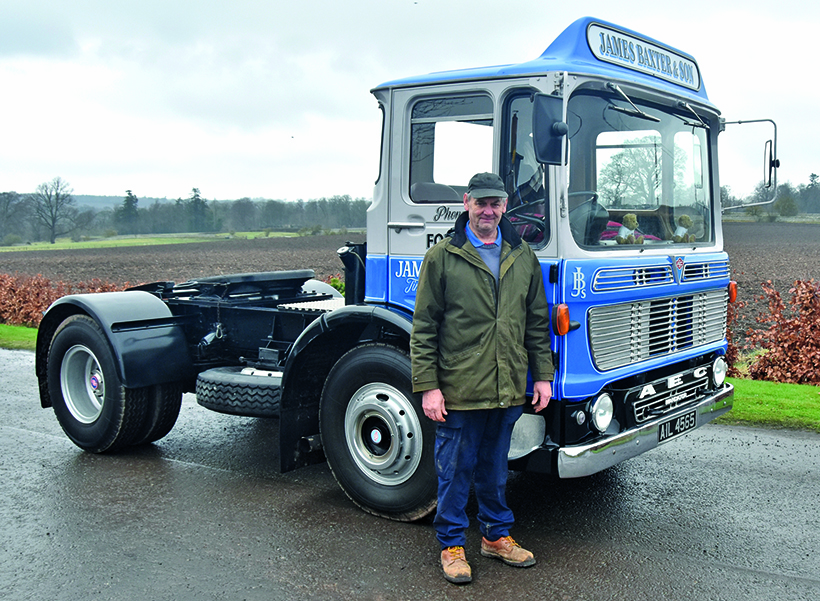 Alistair McBride had to wait many years before he could finally get hold of his Mandator. (Pic: Alistair Baxter)

Work had started at AECs famous Southall plant in 1962, on a compact, 12-litre V8 diesel, but the new engine soon ran into problems. These included a modest low-end torque of 580lb/ft at 1,600rpm, thanks to the large bore and short stroke. AEC was hoping to address this issue using turbocharging, with a view to developing the engine so that it produced over 350hp. Meanwhile, it held off on full-scale production, until the technical issues were fully resolved. 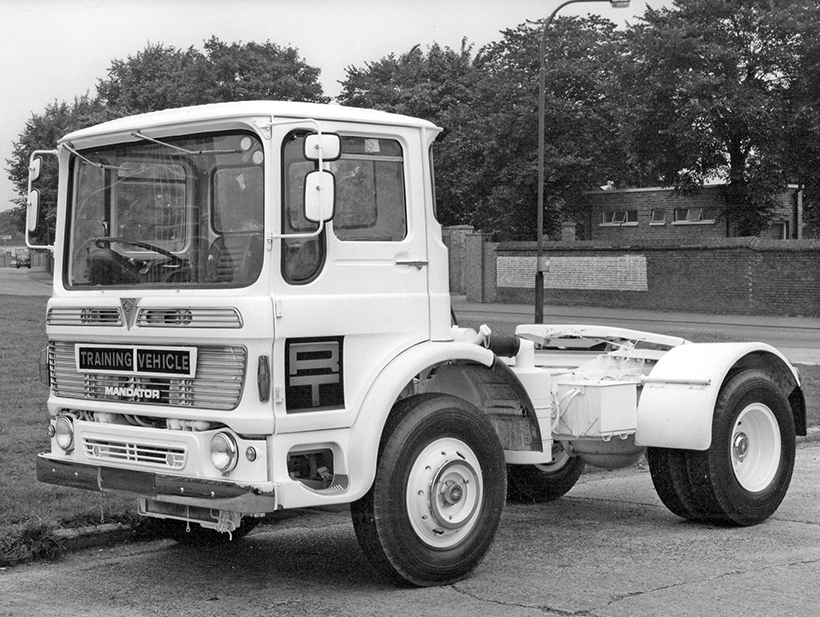 An atmospheric shot of the Mandator in RTITB livery.

However, AEC’s new bosses at British Leyland saw AEC’s V8 as an answer to some of their own problems, and so wanted the engine in production as soon as possible. Despite protests from AEC’s engineers, BL decided to install the V8 in the Mandator.

The first version of the engine developed 247hp at 2,600rpm, and was designed to operate at the UK maximum of 32 tons. The engine was usually driven through a 10-speed, semi-automatic gearbox, although there was no interlock in the splitter system to prevent over-speeding in the ratios. Typical for the time, power steering was an option, rather than a standard feature.

Development issues
Once the V8 Mandator went into service, its lack of development soon became obvious. The lorry had to be driven at high revs to achieve even its modest torque, and this could lead to overheating. AEC engineers tried to fix the problem, but were hindered by BLMC, which preferred to utilise the development budget elsewhere. 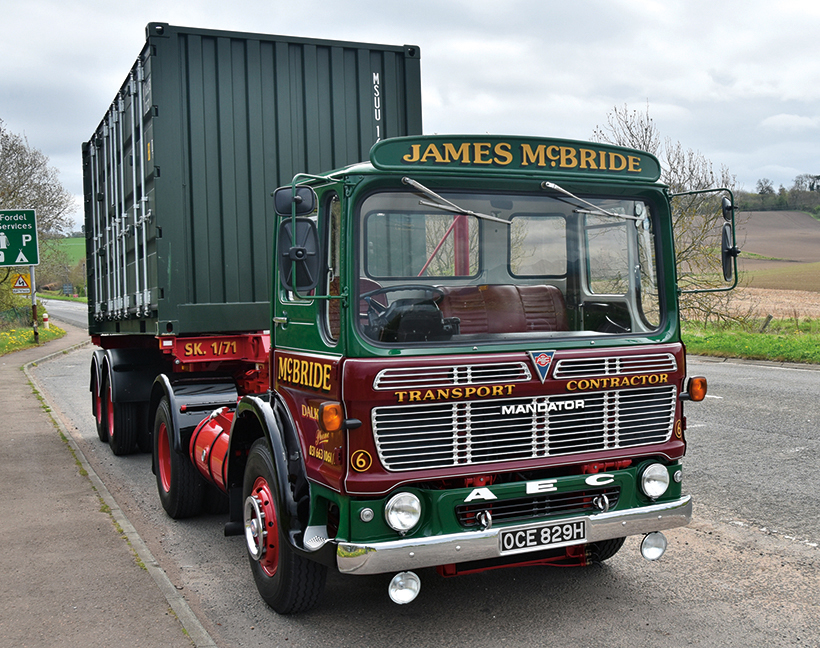 Only a small number of V8s were made, and Brian’s lorry is one of a handful working the rally circuit.

In an attempt to solve the overheating issue, bore size was increased from 5.12in to 5.25in, which increased the engine’s capacity to 13 litres, and boosted power output to 275hp. This went some way to curing the overheating problem but, unfortunately, there were other issues, too. Primary among these was a weak crankshaft – because the engine was relatively short, the crankshaft bearing journals were much narrower than on traditional, in-line engines.

But, when running smoothly, the V8’s performance was more than a match for its contemporaries. It was popular with experienced drivers who understood the risks of over-revving.

By this stage, AEC was a junior partner in BL, and was prevented from using the latest, high-datum Ergomatic cab. This further dented customer confidence and, by the time production ended in 1977, the Mandator had been overtaken by European competition. Three years later, the Southall plant closed. 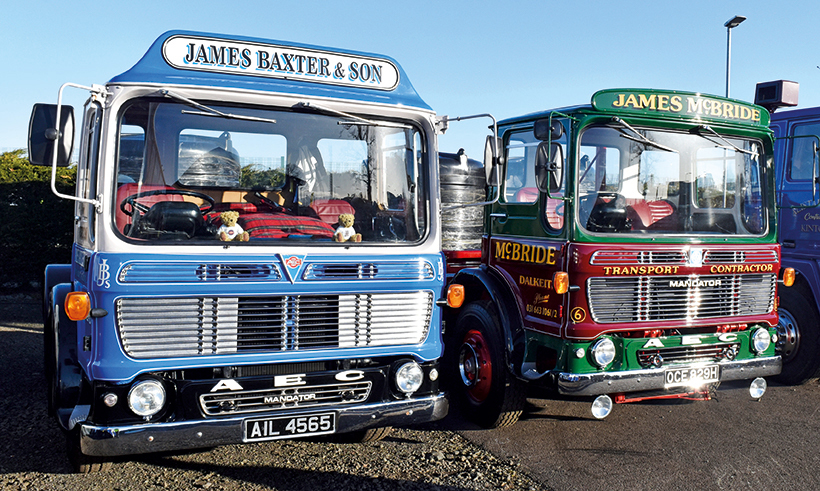 An unusual sight! Brian and Alistair’s lorries at a show held at Ingliston, near Edinburgh. (Pic: Brian McBride)

The six-potter
AIL 4565 and OCE 829H belong to friends, Alistair Baxter and Brian McBride. Both used to run their own haulage companies before retirement. Alistair’s 1971 lorry is equipped with the AEC AV760 six-cylinder engine, while Brian owns the rarer V8.

“I’d been looking out for a Mandator for several years,” Alistair explained. “I’d talk to enthusiasts at the annual AEC Society rally at Newark, and realised there weren’t many survivors in good condition.” But, after several false alarms, he finally heard a whisper about AIL 4565. “I’d heard some rumours about the Mandator on the annual Ayrshire Vintage Commercial Road Run,” he recalls. “Some of the entrants had come across from Northern Ireland, and mentioned the lorry. Apparently, it had been new to the RAF, and based at an airfield there.

“I was told the lorry had been used as a refueling bowser. Then, once it was retired by the RAF, it did a similar job at a civilian airfield in Dublin. I understand that, during this period, the lorry was plated at 56 tons for off-road use. AEC had also fitted a double chassis, to increase the vehicle’s strength. 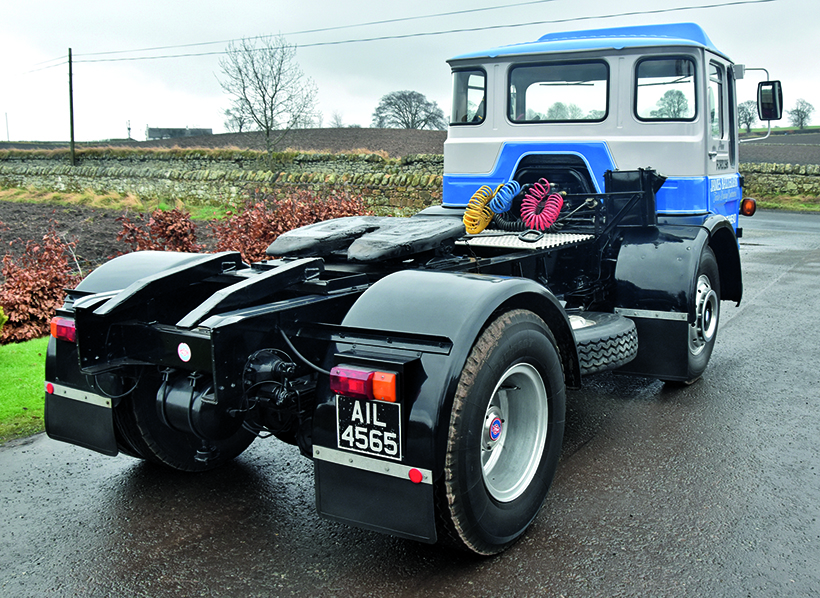 “The Mandator was eventually bought by a haulage company, before passing to a showman. It then did a stint with enthusiast, Robert Elliot in Fermanagh, before being sold to previous owner, Eamonn McKenna, from Maghera in Co Derry. “I rang Mr McKenna in 2016, and we were able to come to an arrangement. I picked the lorry up at the Cairnryan ferry terminal and drove it home.”

Fortunately, the Mandator was in such good condition that all it required was a fresh coat of paint. Alistair had the work done locally in the family’s colours, and has been rallying the lorry ever since.

“The Mandator is the standard article except for the extra hinge bracket on the doors,” he explained. “This was fitted on bowsers because hinges were a weak spot on these lorries, and the operator would have been constantly opening and shutting the door. Mr McKenna also swapped the off-road, heavy-duty reduction hub for AEC’s more user-friendly road version.” 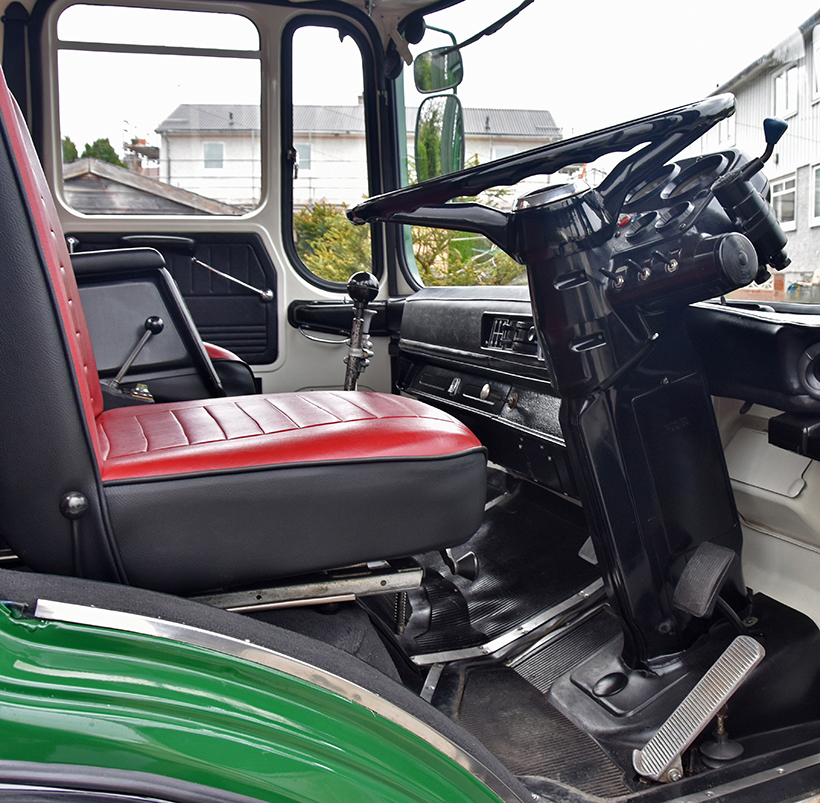 Although the cab was fairly modern in 1968, it was already being overtaken by its European competitors.

The V8
Brian McBride was originally introduced to the Mandator V8 when he started working for the family business. “My father established his own haulage business in 1948,” he explained. “When I left school, I joined the firm and served my time as a mechanic. From 1948 to 2002, our premises in Dalkeith served as the company depot and, during the firm’s heyday, we ran up to 15 lorries.

“I came home from school one day to find a brand new Mandator V8 sitting in the yard; a demonstrator from the local dealer. I was very impressed and, once I started my own collection, was determined to track one down.

“Most of the survivors are kept under wraps, but a small number have been restored,” he explained. “I believe only four or five are active on the show circuit, including mine. There are thought to have been between 300 and 350 V8 lorries built before the model was finally withdrawn. The reason for the uncertainty is a few discrepancies over the chassis numbers.” 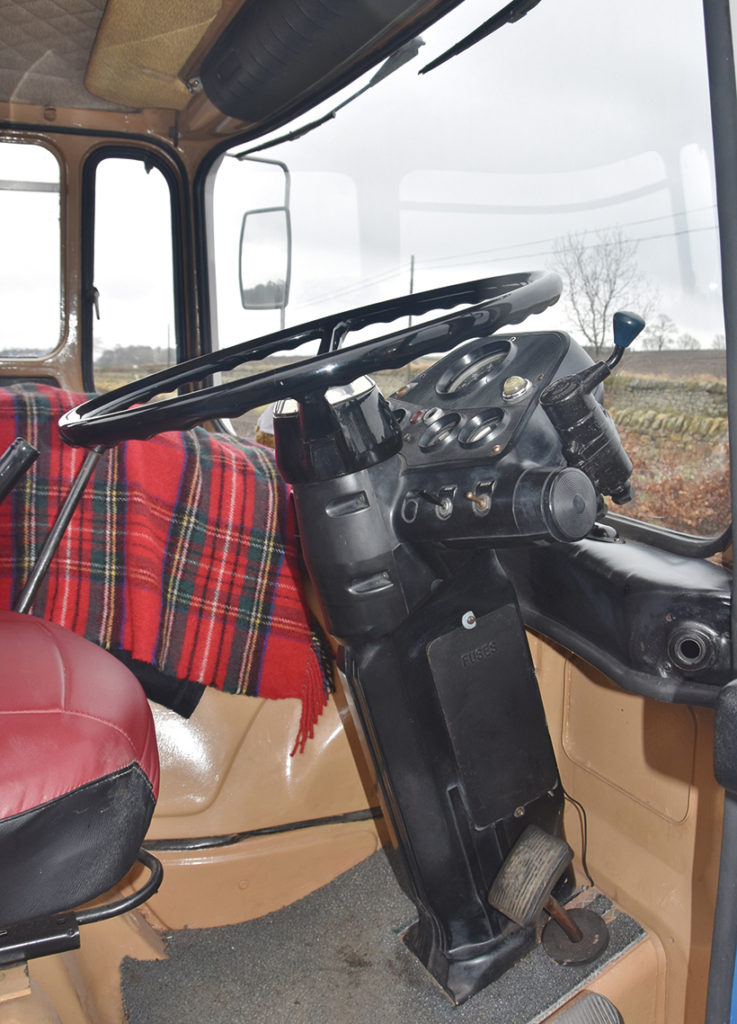 Mandator cab was well equipped for its era.

OCE 829H was supplied new in 1970 to the Road Transport Industry Training Board (RTITB), and it’s believed to be the last of an order for 16 Mandator V8s. The AEC was subsequently acquired in 1975 by a showman, who used it with a semi-trailer loaded with fairground rides.

Seven years later, the lorry was sold into preservation, and passed through the hands of several owners. Then, in 2000, it was bought by well-known Ergo enthusiast, Neil James from Stourbridge, who fully restored the vehicle.

Spotted at Gaydon
“I first came across the lorry at Gaydon when it still belonged to Neil James,” Brian recalls. “He’d restored the AEC in the colours of RTITB, and was thinking of selling the vehicle. Unfortunately, I missed out on that occasion, and the lorry ended up with Ian Craig Haulage at Denny. They kept the lorry for a couple of years, before selling it on to me in 2016.

The Mandator in the livery of previous owner Eamonn McKenna.

“The lorry was in immaculate condition, and the only things I’ve added are a proper headboard and the stack that was used on export orders for the Australian market.”

Part of the arrangement with Ian Craig Haulage was that the lorry would be repainted in Brian’s colours. The signwriting was done by a local professional Brian has used for several years.

“I handle the older commercials with respect,” he explained. “You need to spend time getting used to the driving characteristics, especially a temperamental beast like the Mandator V8. When I’m out driving, I also hitch a trailer because the V8 prefers working with a load.

“The lorry probably seems a bit old-fashioned compared to modern trucks with full-synchro gearboxes, but the Mandator was a market-leader back in the late 1960s. With the introduction of the V8 and sleeper cabs, the model should have given AEC a fighting chance against the European competition, but it wasn’t to be. 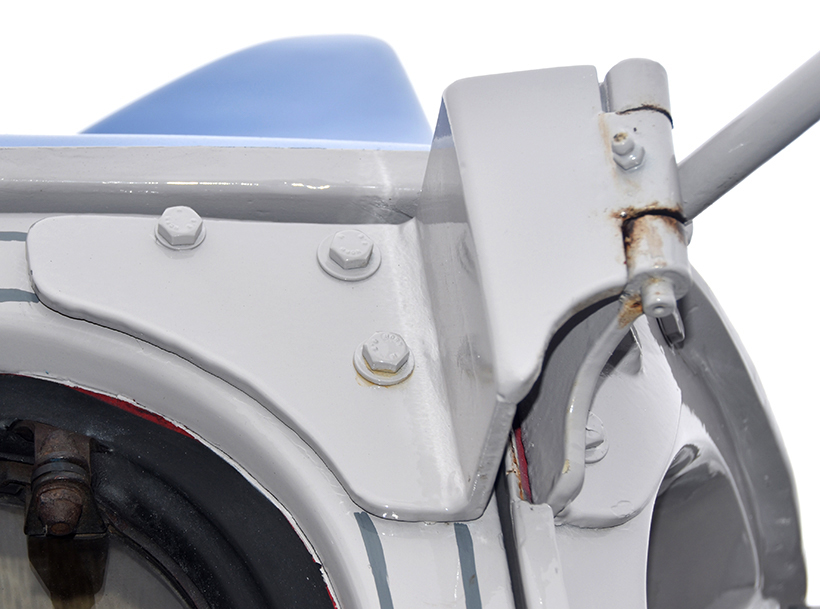 “The optional Fuller gearbox is easy to use because it’s fitted with an inhibitor. The lorry isn’t equipped with the optional power steering, but that was typical of the time. Haulage contractors were reluctant to spend hard-earned money on optional extras, even if it meant their drivers ended up with sore shoulders! The lorry has already been to several rallies, including the Ayrshire Road Run, and there have been no issues to date.” 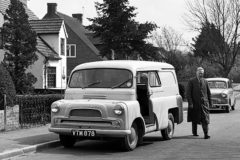 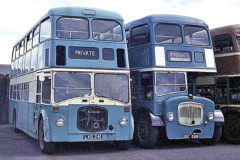