The 2CV Fourgonette van was a hard act to follow but, as Russ Harvey explains, the Citroën Acadiane rose to the challenge! 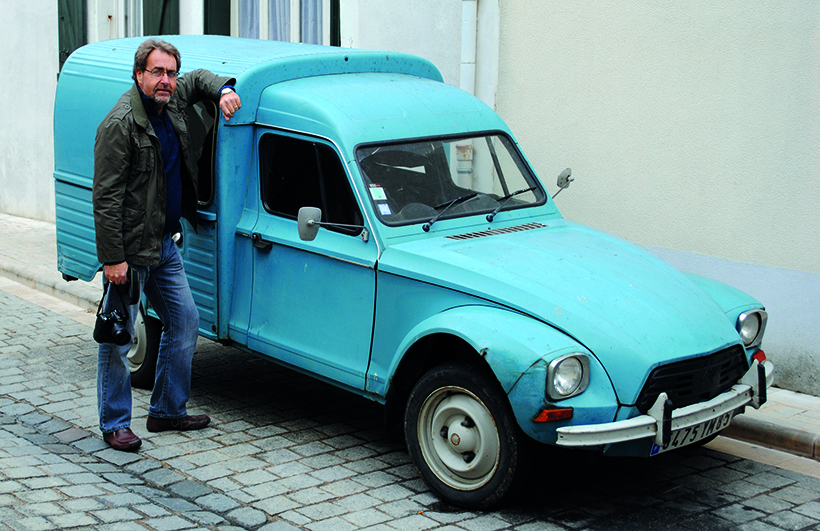 Author with a Citroën Acadiane seen in daily use back in 2010 in Lucon, France.

The Citroën 2CV fourgonette was an extremely hard act to follow, but follow it Citroën certainly did. The Citroën Acadiane was a small commercial vehicle derived from the Dyane. It was only available in left-hand-drive during the relatively short production run of some 250,000 plus units. They rolled off the production lines in Spain, (it was only assembled in Spain) and was never sold in the UK. Eventually, the van was succeeded by the Visa-based C15 van, during 1987. 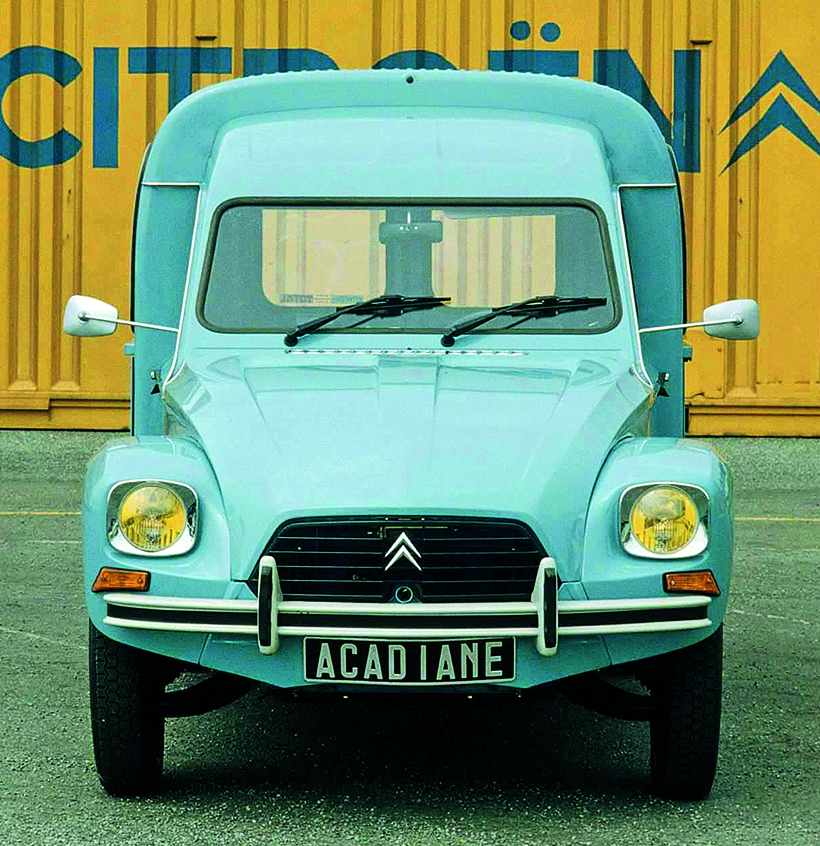 The Acadiane was launched in March 1978, replacing the Citroën (2CV) AZU and AKS. The rear from the AK400 van was simply grafted onto the front cab from a Dyane, with a raised roofline, which resulted in a smoothed-off join at the front of the van, at the ‘B’ post. The result was said to be improved aerodynamics, performance and fuel economy, compared to the AK400. 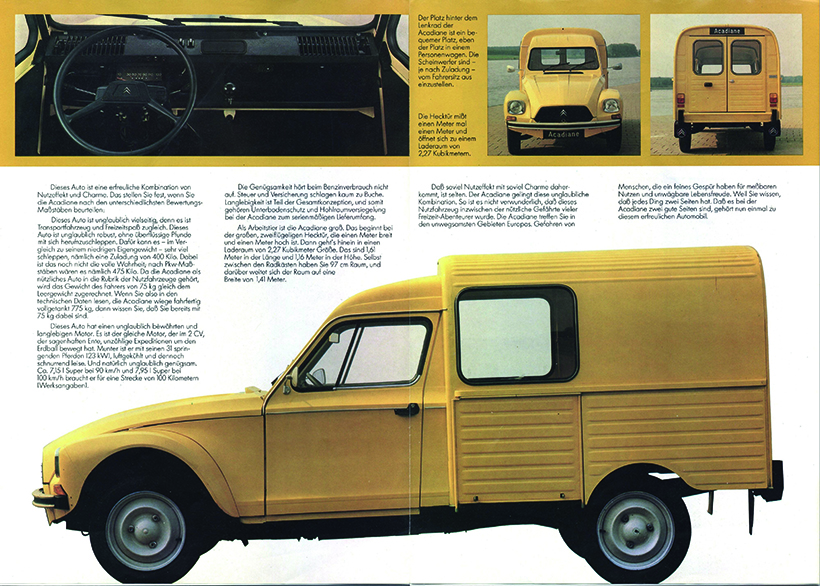 However, when you view an Acadiane from the side profile, the swage line on the cab and the rear cargo body don’t match up, and it’s clear that two vehicles have been amalgamated. The Acadiane was powered by the ever reliable 602cc engine that pushed out 35hp, and remained in production until July 1987, seeing 253,393 units assembled. The Acadiane differed from the Dyane by having an uprated, heavy-duty suspension, plus it came with wind-down windows in the driver’s and passenger doors. Although many owners have replaced doors for a variety of reasons from Dyane – mainly due to corrosion – the saloon versions were fitted with horizontally-sliding windows, the winders never made it to the saloon version. 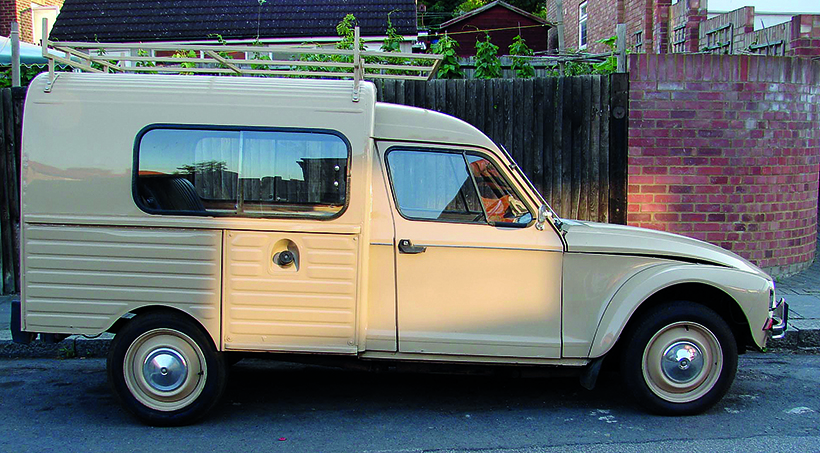 So, where did the name Acadiane come from? Well, Citroën had already used the prefix AK for its light commercial ranges, so it was an obvious pun to name the AK Dyane ‘Acadiane’, pronounced the same way in French. The Acadiane differed from the Dyane; it had a slightly altered chassis and a rear-brake limiter whose action was dependent on the load. The Acadiane’s designated payload was approximately 500kg, an increase over the AKS400, but it was said that handling was impaired when fully laden. 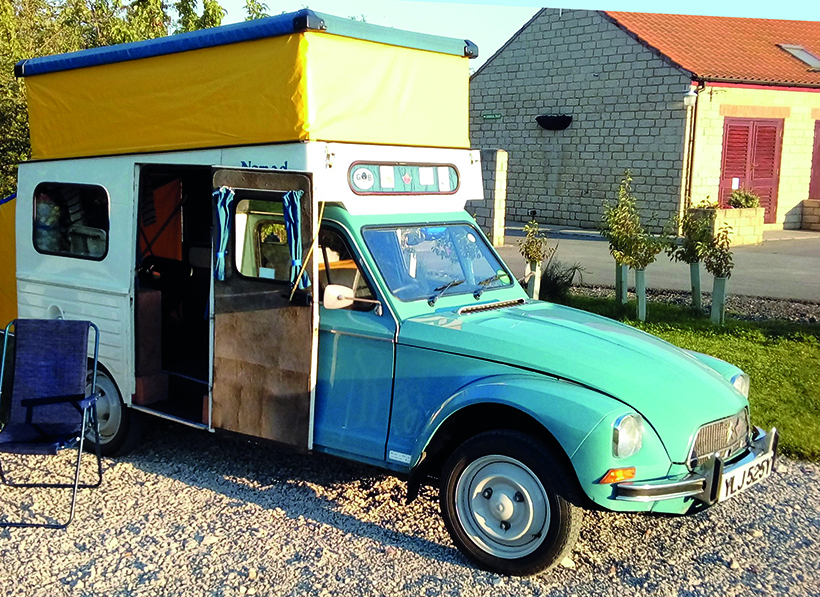 Camper version based on the Acadiane, named the Nomad. (Photo David Chapman)

The Acadiane was available in commercial (two-seater) form or as a ‘Mixte’, with sliding rear side windows and a removable rear bench seat. The Mixte version was better equipped and came with a fitted sun visor to the passenger side, an item missing in the more basic commercial version. In line with many Citroën light commercials, the roof of the rear bodywork was corrugated to add extra rigidity to the structure at very little cost. However, unlike its predecessor, the 2CV van, the side panels were indentations for support rather than corrugations. Allegedly, the Acadiane could cruise on the flat comfortably and economically at 55mph! 1979 was the best year for production, with a tad under 50,000 vans leaving the factory. Although the Acadiane was seen as a direct replacement for the 2CV van from 1978, Citroën was still supplying and honouring orders outstanding for the ever-popular 2CV van to its larger customers for the French Post and EDF versions of the 2CV vans, well into 1981! 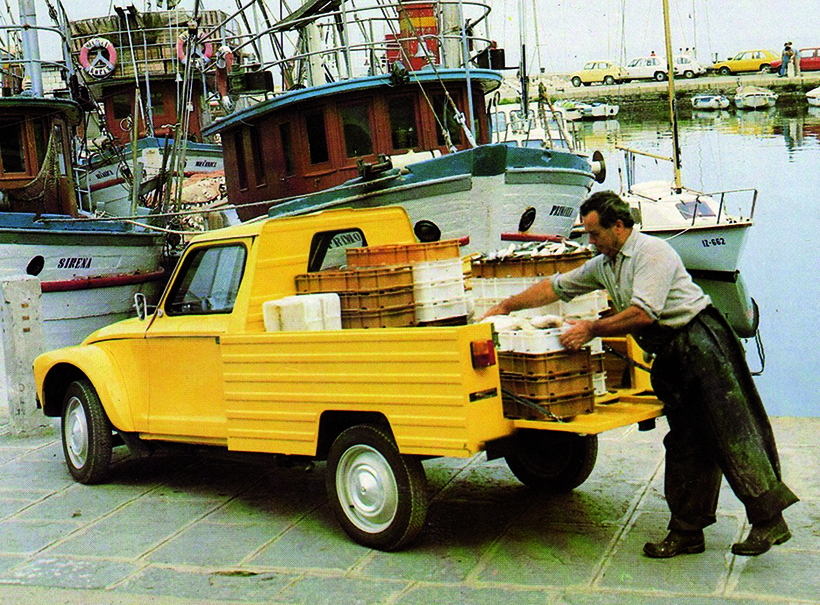 There have been a few camper van conversions based on the Acadiane, one based in the UK and owned by David Chapman, known as a ‘Nomad’, is a nice compact design. There’s also a conversion known as the Laverda with a much higher body that extends, ‘Luton’-style, over the cab. It’s almost as if a caravan body had been placed on the rear; it looks the part, but must be a handful to drive in most conditions, I would have thought. 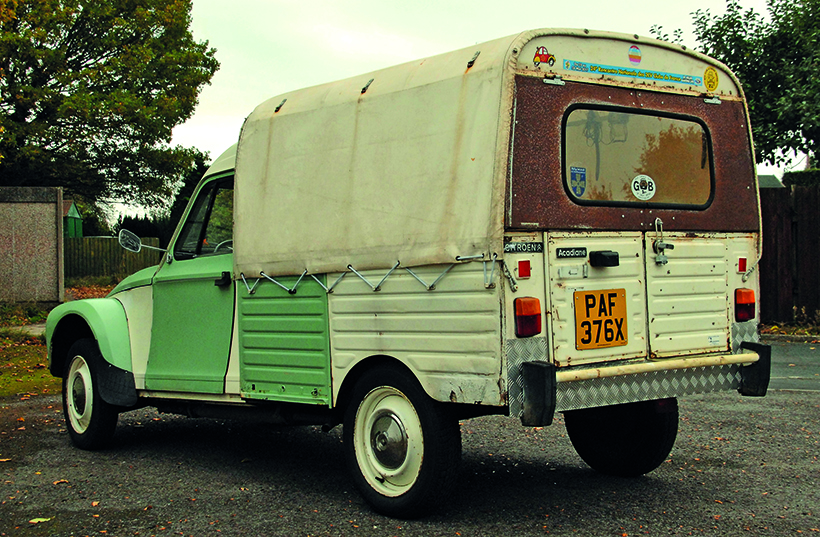 The Citroën Acadiane wasn’t listed as a pick-up, only a van. However, a number of one-off conversions have been done to good standards, but a survivor exists in the UK – owned by Gus Wookey – of what is believed to be a factory conversion. He was told that originally the pick-up was ordered as a council vehicle for a village near Rouen, and converted by the Citroën factory! The jury is still out on this one, that said, Gus has advised me that club members believe this to be true! Sadly, its duties on what it was deployed for are unknown. Gus has the original Carte Gris, which confirms the original colour as being white. 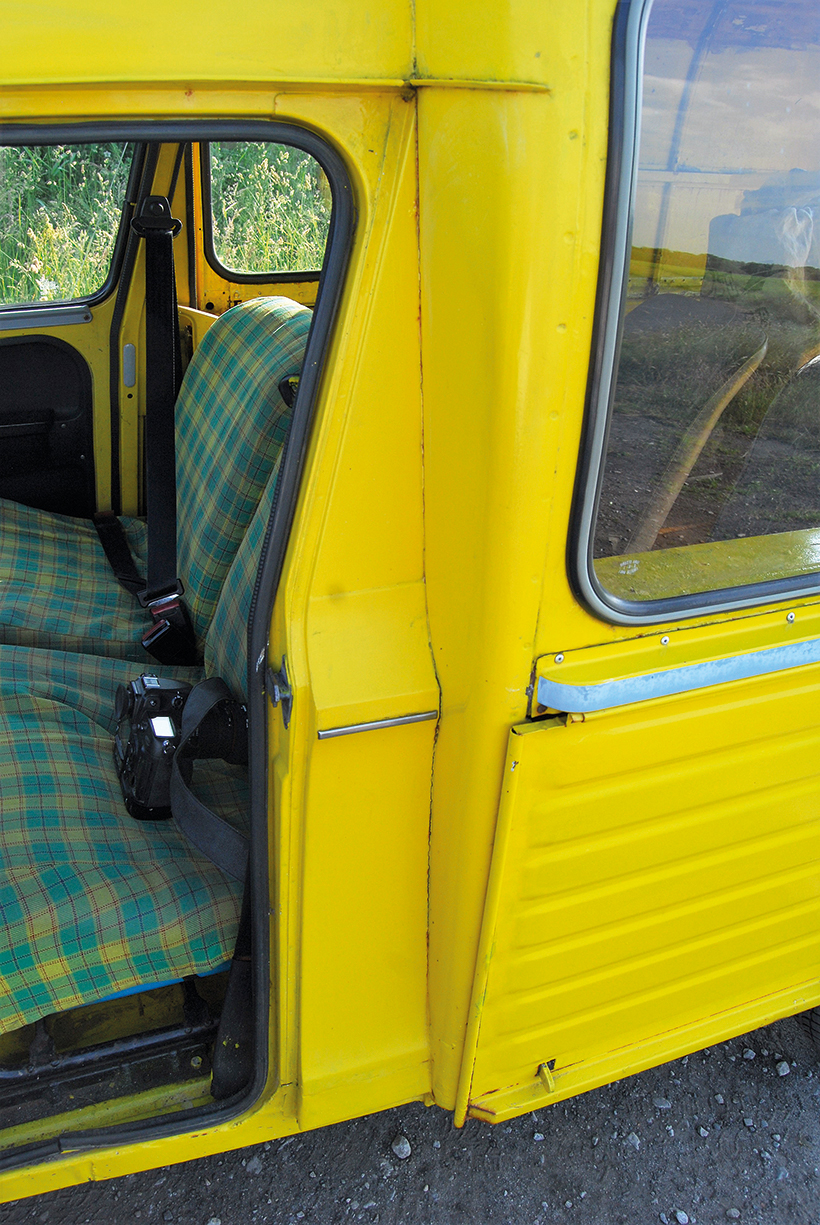 Body join on the B post where the Dyane meets the AK body.

However, a Citroën factory-based pick-up based on the Acadiane was produced during 1981. Named the Citroën Geri, it was potentially the most confidential production from Citroën. During the 1970s, Citroën, Iskra and Tomos (two companies owned by the Yugoslavian government), created a joint venture called Cimos (Citroën and Tomos). Cimos was owned at 50% by Citroën and 50% by the Yugoslavian government, and this joint venture allowed Citroën to officially produce and sell cars in Yugoslavia. 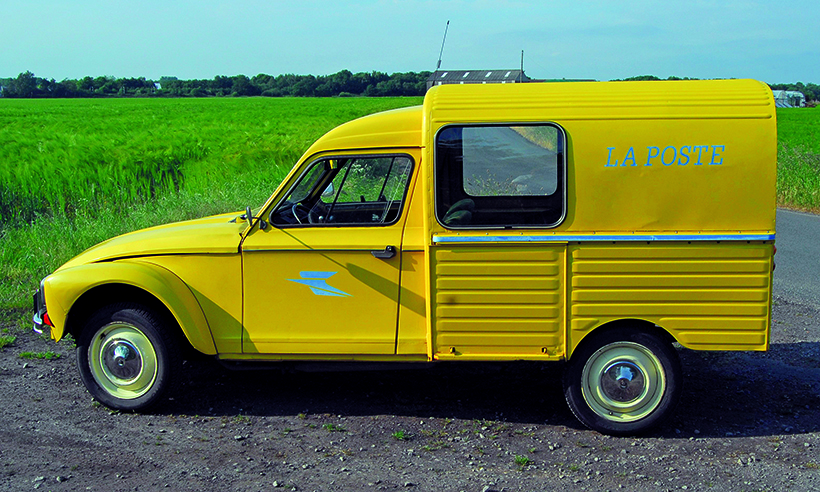 Cimos Citroën produced commercials based on the Dyane, one of which was a factory pick-up option. These were locally produced, but were never exported. The Dak was a shorter version of the Acadiane, with a square box on the rear that was higher than the Acadiane. It also featured a single-piece, top-hinged rear door with options for side windows, if required. The pick-up version was the Geri based on the Dak, supplied as an open back, or with the option of a tilt, the pick-up came equipped with a drop-down tailgate. 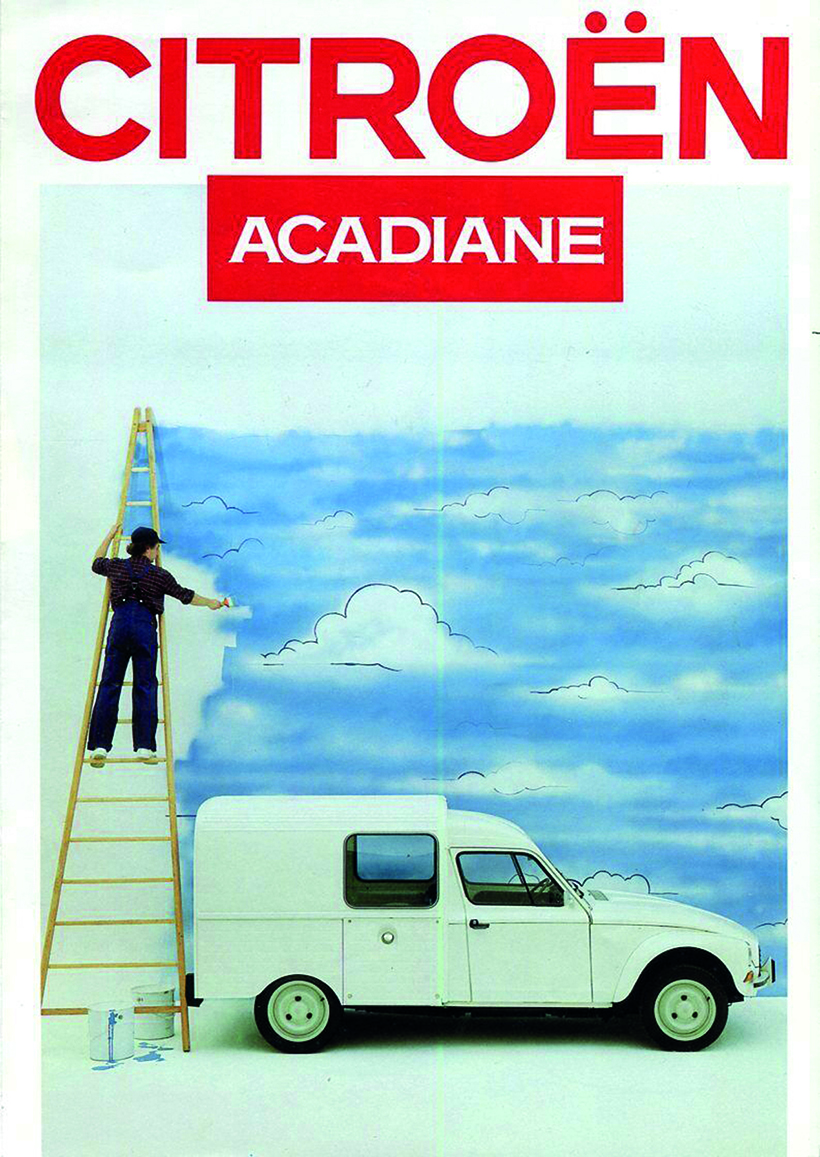 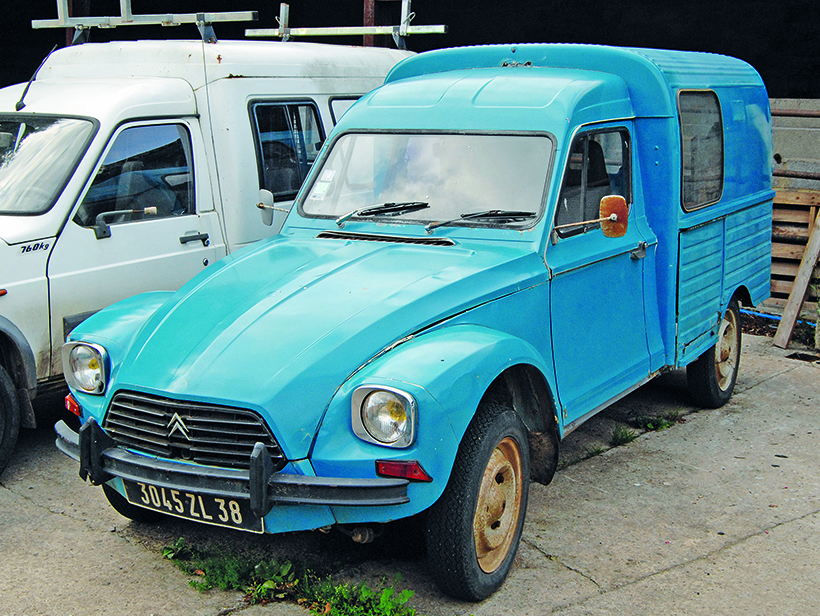 Snapped in the UK after being imported from France, still on French plates.

I’m extremely grateful to the following who have assisted me with my quest for knowledge and information on these splendid vehicles: Paul Brice, Gus Wookey, Andi Donaldson and David Barry, who runs an active Facebook page based in the UK for the Acadiane. Also, David Chapman who owns a Nomad, a camper based on the Acadiane. 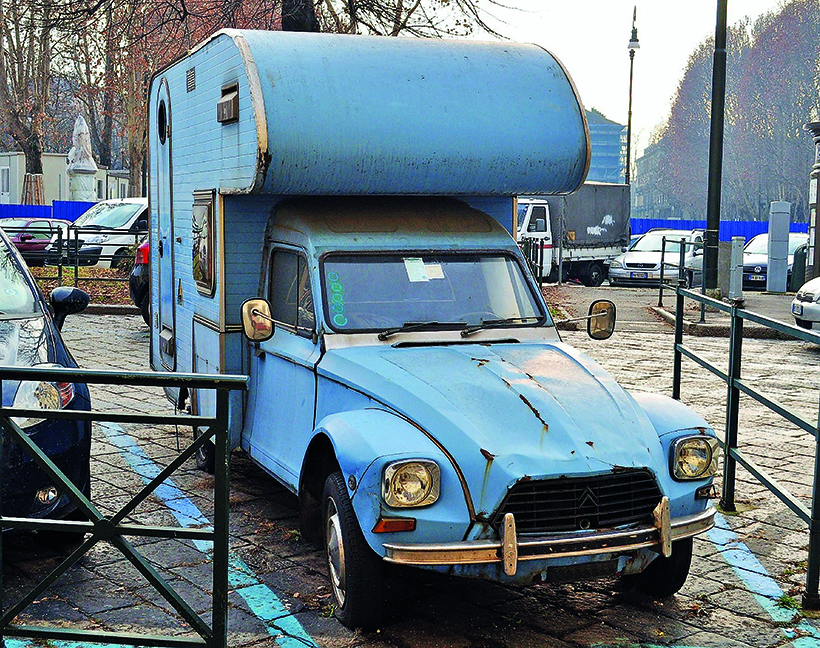 Laverna Camper conversion based on the Acadiane. 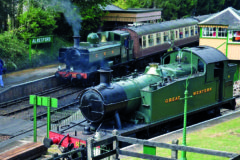 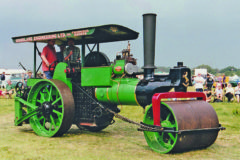