Dick Furniss looks back to the spectacular rally held at Oulton Park in 1993, to celebrate ERF’s 60th anniversary 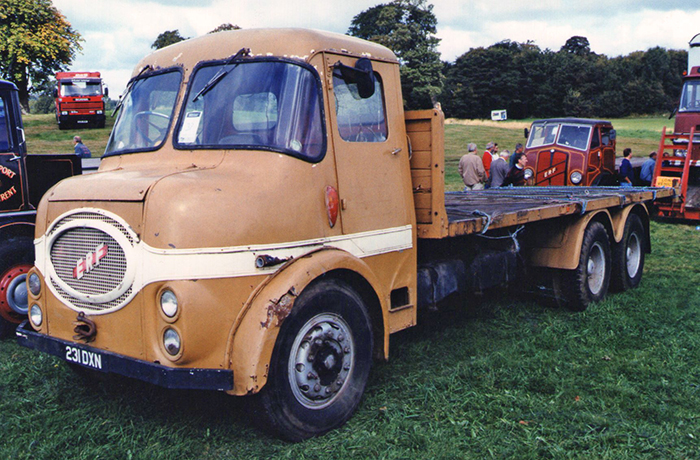 This rare Model 66GSF ‘Sabrina’, 231 DXN (London, 1962), was new to Woodside Brickworks of South Norwood, London, as a dropside. It was later purchased by Aldershot showman Jack Trickett, fitted with a frame body and used to transport an Octopus ride. The lorry was acquired by Andy Ping of Godshill, Hampshire, in 1989 and is seen here at ERF’s 60th anniversary. I last saw it still in a similar, unrestored condition on a low-loader at the 1998 Banbury Steam Rally. Is it still in existence, I wonder?

On Saturday, 11th September 1993, the Register of ERF Vehicles Society (or REVS, as it’s probably better known), organised a display of ERF lorries at Oulton Park – the racing circuit in Cheshire – to celebrate ERF’s 60th anniversary. It’s 60 years since Edward Richard Foden and his son, Dennis, started the business.

There were over 200 of the company’s products on show during the day, including the first ERF to be built (chassis number 63), and the latest rigid model EC (chassis number 74563). As well as a general display area for ERF trucks, there was also a concours competition, a contest to find the Best Working Truck, plus a number of trade stands and other attractions.

Unusually for such an event, both entry and parking were free, with the comprehensive souvenir programme and detailed vehicle entry list costing a modest £1; excellent value for money! As it’s now more than 25 years since that event, and with the ERF company sadly no longer in existence, I thought it would be interesting and timely to recount some of the lorries that were seen at the 60thcelebration event.

Sadly, due to space limitations, it’s impossible to illustrate all of the vehicles here so, instead, I’ve included a selection of the more interesting and unusual ERFs which aren’t seen at similar events today, some of which may no longer be in existence. 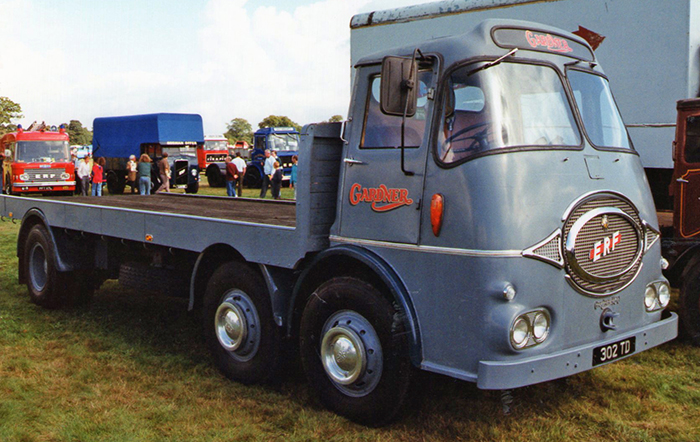 This twin-steer Model 66TSGX3, 302 TD (Lancaster, 1962), was new to L Gardner & Sons Ltd, and spent its working life with the Patricroft engine manufacturer. Later fitted with a 180 engine, the lorry was transferred to Peterborough after the Gardner takeover by Perkins Engines, where it was refurbished. When at Oulton Park, the lorry was still owned by the Gardner/Perkins Engine Group. I believe it’s currently in the Bury Transport Museum 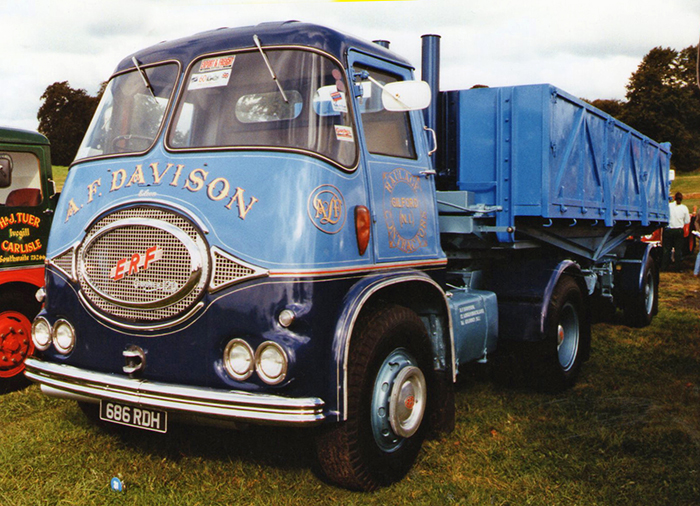 I think this Gardner 120-engined ERF Model 64G, 686 RDH (Walsall, 1961), complete with short four-in-line tipping trailer, had travelled from Northem Ireland to the event. No further details are known about the vehicle 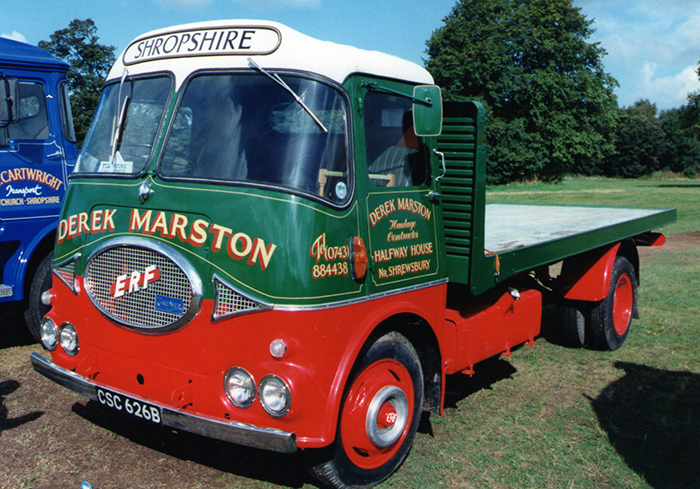 This Gardner 4LK-engined Model LKG44 CSC 626B (Edinburgh, 1964), was new to Scottish Brewers Ltd, before passing through various hands in preservation, including Derek Marston from Stretton Heath, in Shropshire, as seen here 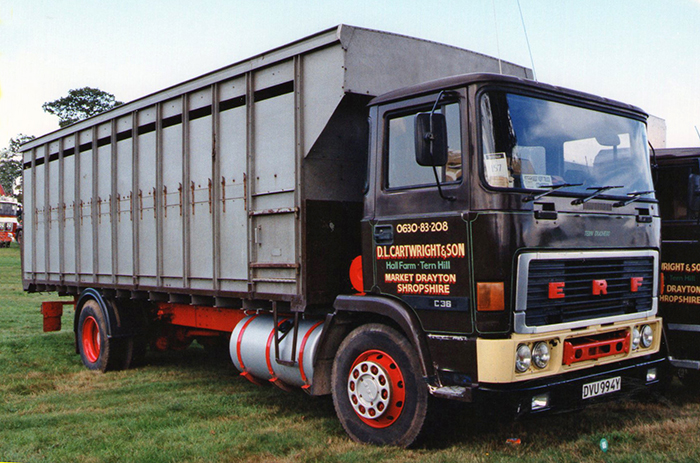 This Gardner 6LXCT-engined C Series was new to Littlewoods as a tractor unit. Purchased by Mr D Cartwright from Market Drayton in 1988, it was used as a tractor unit for two years, after which the chassis was stretched, with the lorry being turned into a drawbar unit, carrying a cattle box, as seen here 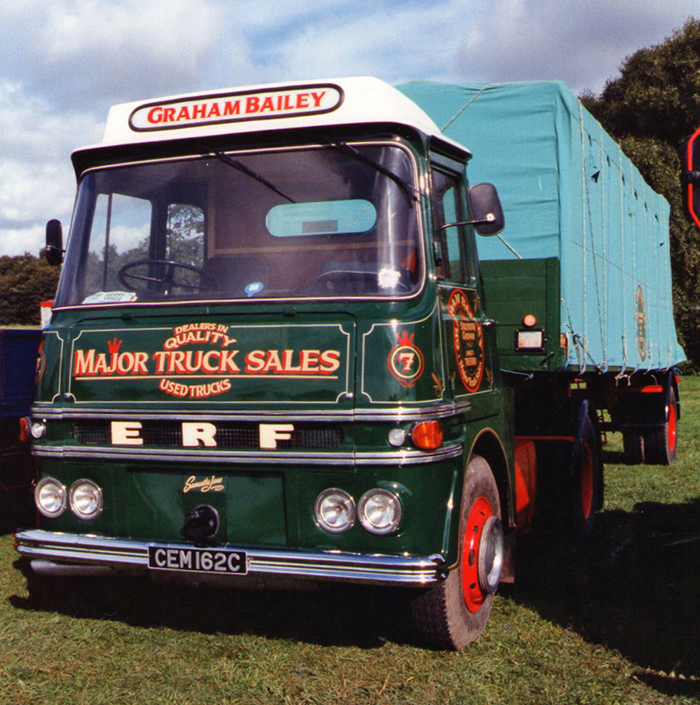 This Gardner 6LW-engined 64G, CEM 162C (Bootle, 1965), was new to Fine Fare Holdings Ltd, but is seen here in preservation, in the ownership of Graham Bailey from Stalybridge, Cheshire, coupled to a period single-axle trailer 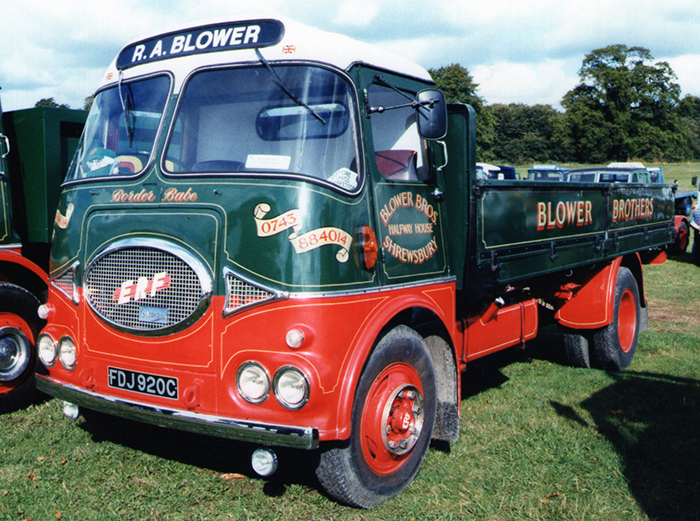 Fitted with a Gardner 4LK engine, this KV-cabbed lorry, FDJ 920C (St Helens, 1965), was new to British Sidac, and was later used by Newcastle-based company Paynter and Stadium, to transport ERF parts from Middlewich, before being purchased by Blower Bros of Shrewsbury 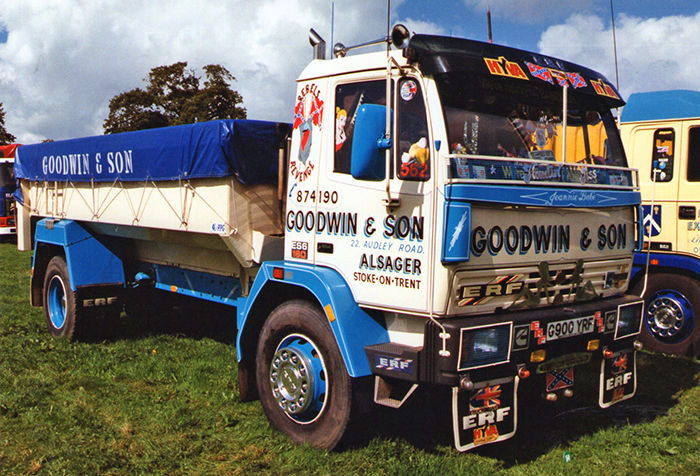 In the late 1980s, ERF signed an agreement with Austrian truck-maker Steyr, to use Steyr’s all-steel cab on its ES6 and ES8 lorry models, as seen here on this Goodwin & Sons four-wheeled ES tipper, G900 YRF (Stoke-on-Trent, 1989) 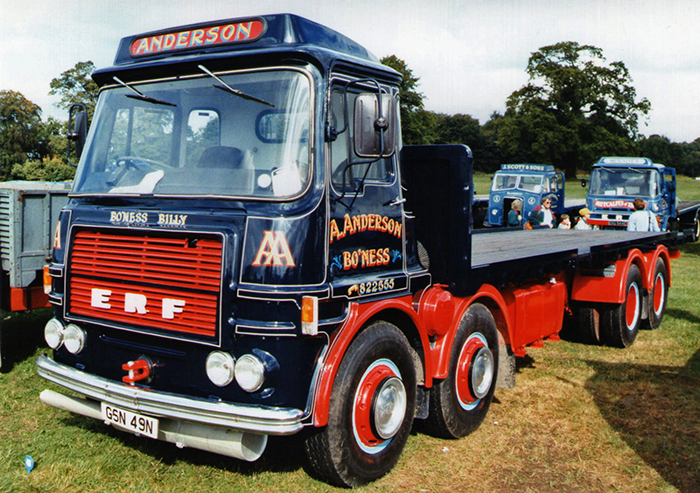 Fitted with a Gardner 6LXB engine, this LV-cabbed eight-wheeler, GSN 49N (Dundee, 1974), was new to DC Thompson of Dundee and, upon retirement in 1992, was acquired by Alex Anderson of Bo’ness, and refurbished in his company’s colours, as seen here 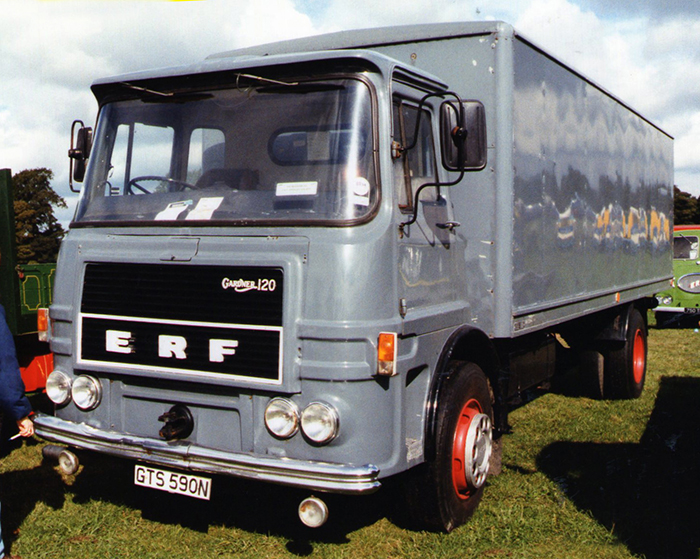 Another ex-DC Thompson vehicle, this Gardner 120-engined box lorry, GTS 590N (Dundee, 1974), is seen in the ownership of John Skeldon of East Lothian, who purchased it earlier in 1993 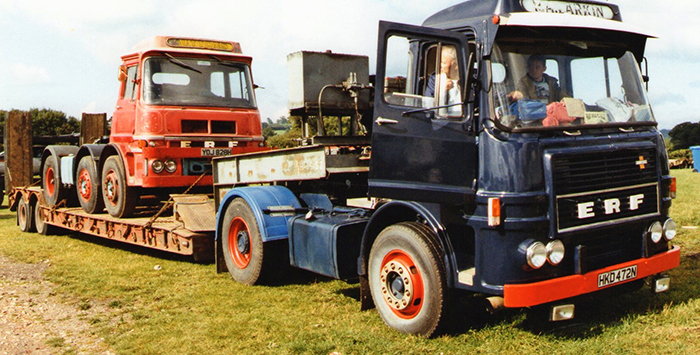 Believed to have been owned by Kevin Dennis at the time, this Cummins-engined A Series tractor unit, HKD 472N (Liverpool, 1974), transported Kevin’s ex-Suttons of St Helens twin-steer tractor to the show on the low-loader trailer, as seen here 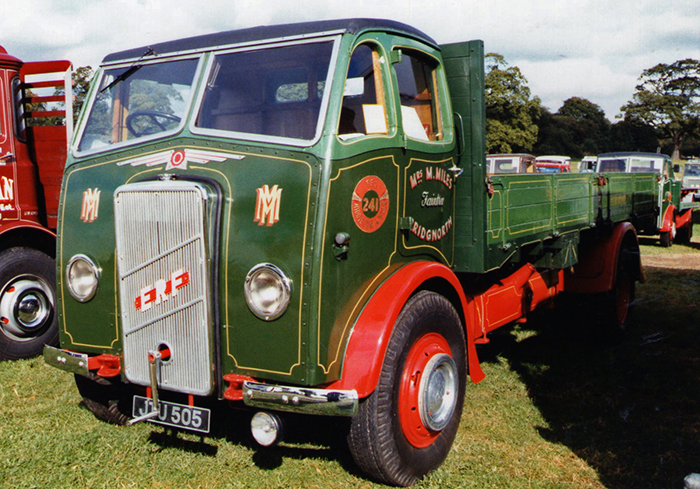 This Model C14, fitted with a Gardner 4LW engine, JTU 505 (Chester, 1947), was new to Mrs M Miles of Bridgnorth, and was later re-purchased by ERF Ltd and restored by apprentices, before being sold to JB McBean for preservation, as seen here 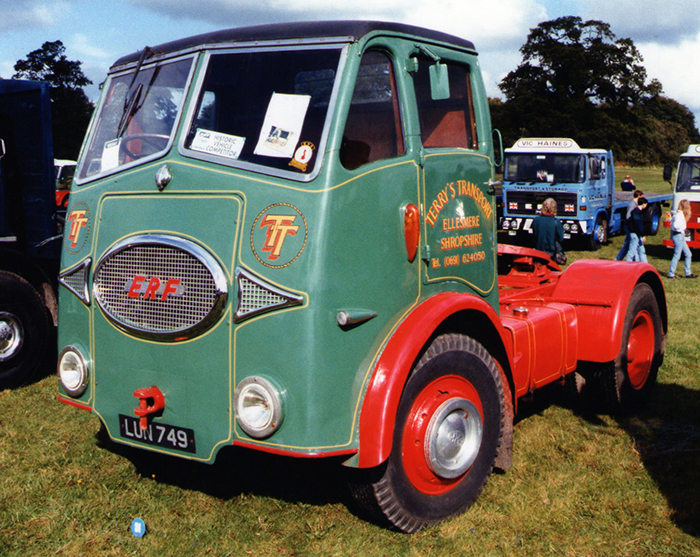 Fitted with a Gardner 5LW engine, this Model 54G artic unit, LUN 749 (Denbigh, 1955), was new to William Gittins of Wrexham, and used to haul bricks, before being sold to Henry Williams of Chirk, who used it to pull a tar plant. In the early 1980s, the tractor was purchased for preservation by Mr JT Evans, of Ellesmere Port 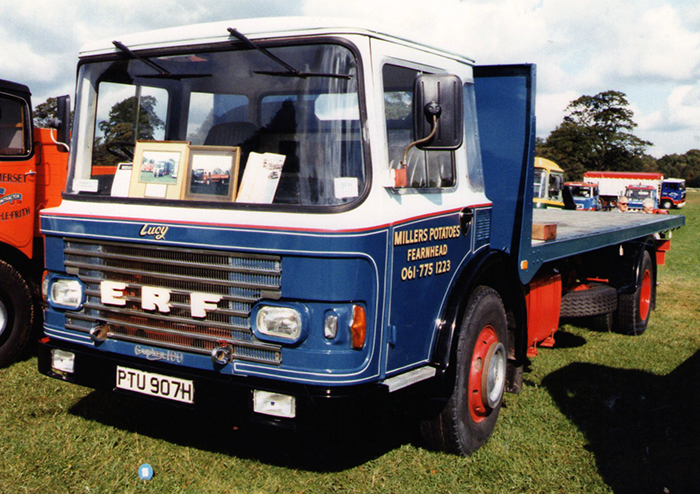 Fitted with the ‘Lowline’ cab similar to those fitted to some ERF fire appliances, this ex-works show model, PTU 907H (Cheshire, 1968), was originally used by the ERF Parts Dept at Middlewich, before being sold to Keith Higham of Millers Potatoes in 1987, who used it to deliver vegetable, firstly with a curtain-sided body fitted, then as a flatbed, as seen here 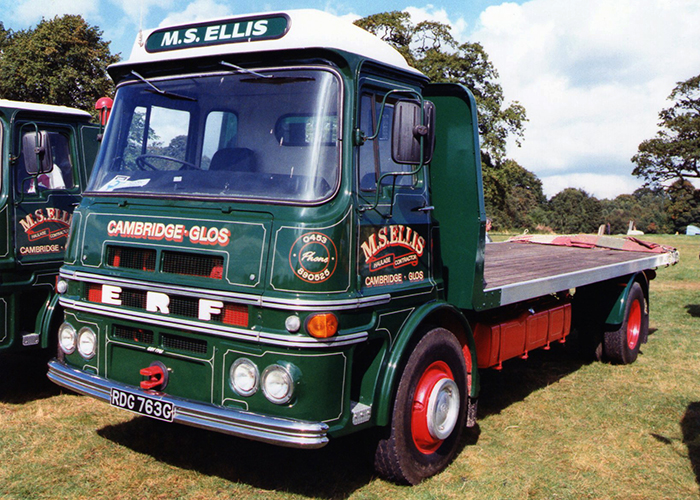 This Gardner-engined 54G flatbed, RDG 763G (Gloucester, 1969), was new to Sutton & Weaver Ltd, followed by a couple of other hauliers, before being purchased and restored by Mike Ellis of Cambridge, Gloucs., in 1980 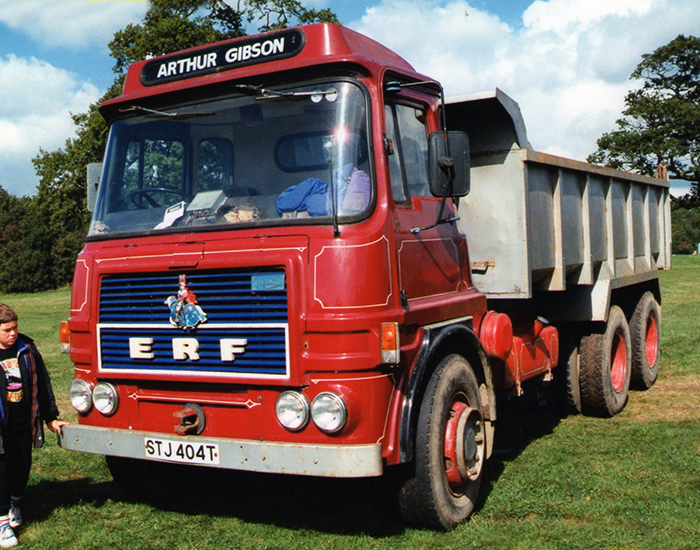 Looking very much a working lorry, this Gardner-engined six-wheeled tipper, belonging to Arthur Gibson of Macclesfield, was a 64GXB tractor unit before being converted to the form seen here in 1979 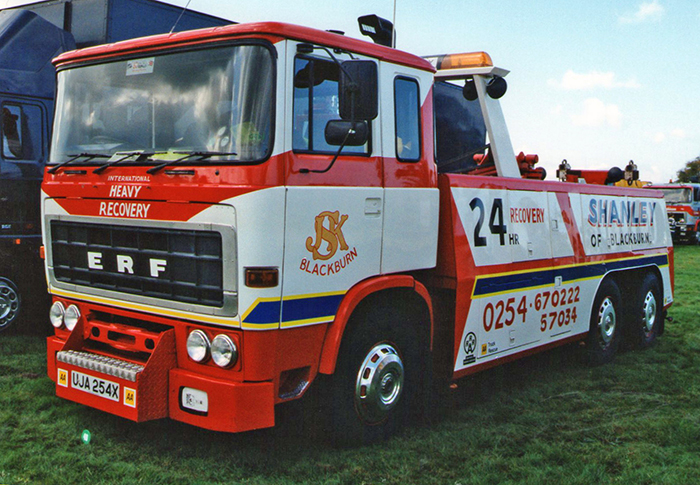 I know little of the history of this double-drive B-Series, UJA 254X (Manchester, 1981), seen here as a heavy recovery vehicle, in the ownership of JK Shanley of Blackburn 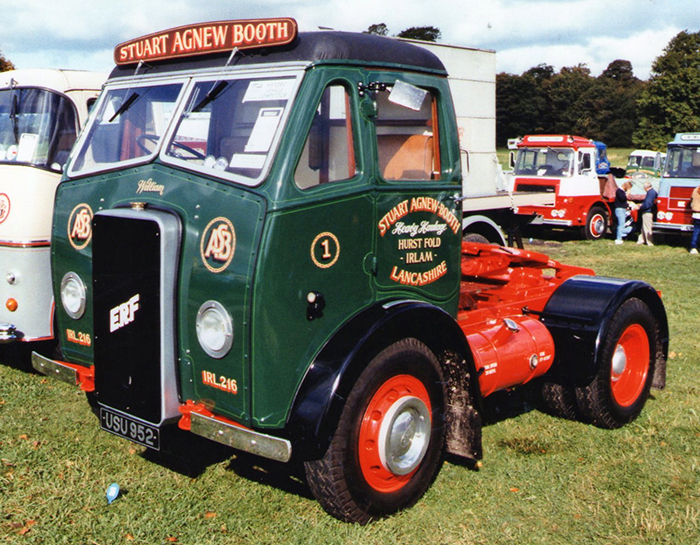 This extremely rare D16 Model, new in 1942, but re-registered USU 952, was fitted with a 7.7-litre AEC oil engine because, at the time it was built, the usual Gardner engines were being commissioned for fitting in mini-submarines. The lorry was saved for preservation in 1980, with the distinctive, Jennings-built cab being renovated by David Mitchell of Bradford 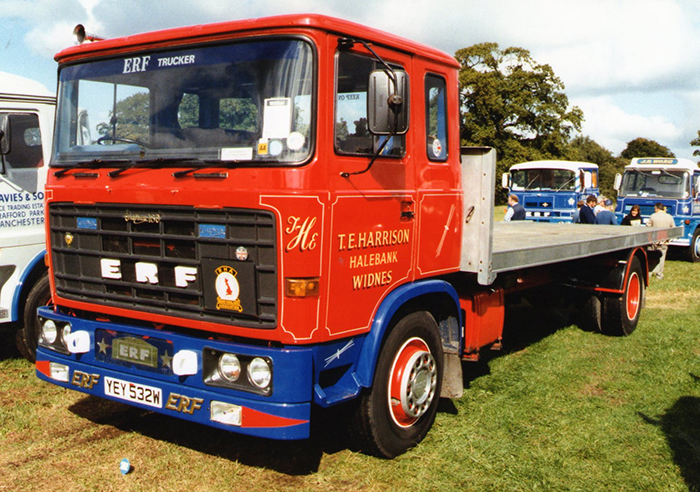 When photographed at Oulton Park in 1993, YEY 532W (Bangor, 1981), was very much a working lorry. This sleeper-cabbed B Series flatbed was bought by owner EJ Harrison, of Widnes, from Commercial Repairs (Alsager), where it had been extensively overhauled 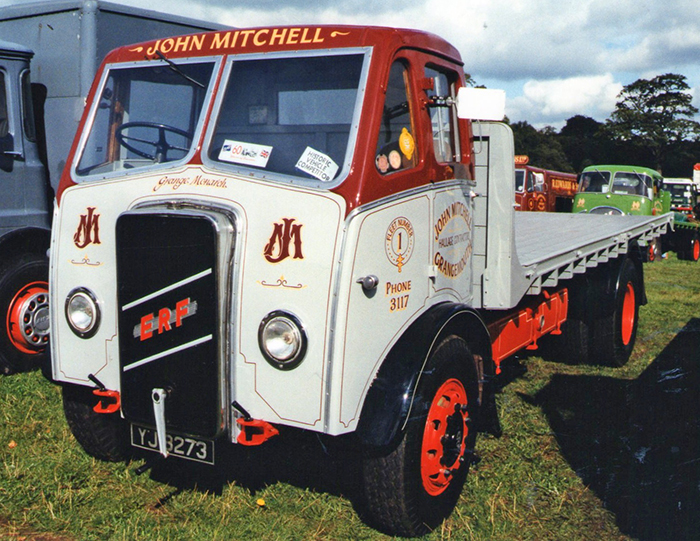 Usually only seen north of the border, I believe this 1946-built C1 Model, YJ 8273 (Dundee, 1946), was new to Joseph Grant of Broughty Ferry, but was seen here in the livery of John Mitchell of Grangemouth, carrying the name Grange Monarch 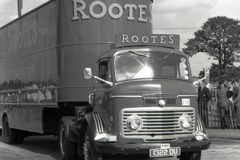 Lorry Driver of the Year 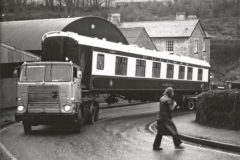