Jim Shaw explains the propulsion revolution that’s going to be required to reduce greenhouse gas emissions from the world’s ships, and how designs will need to be changed in light of new, IMO 2020 regulations.

The International Maritime Organisation (IMO) regulations limiting the sulphur content of bunker fuel to 0.5%, a reduction of over 80% from previous levels, took effect on January 1st, 2020, triggering the start of a propulsion revolution. The new regulation is part of the organisation’s commitment to reduce greenhouse gas emissions, particularly CO2, from the world’s merchant fleet by at least 50% over the next three decades.

This will require nothing short of a propulsion revolution; tremendous changes within the maritime sector, with the development of a commercially-viable, net-zero CO2 emission vessel needed by 2030, to cut average carbon intensity, or CO2 per tonne-mile, by at least 40%. 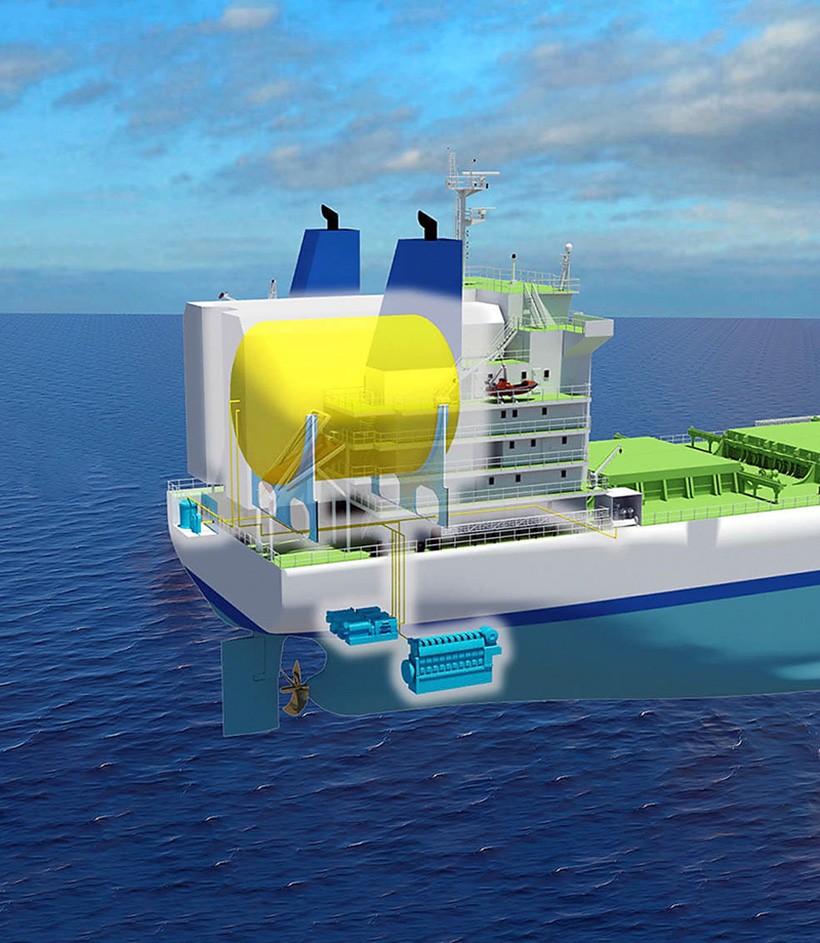 A cut-away rendering of an LNG storage tank installation on the stern of an Ultramax bulk carrier illustrates the amount of space required, with the weight of the fuel being carried that high having to be compensated for by the ship’s ballasting system.               (Pic: Oshima Shipbuilding)

Emissions baseline
At a recent forum on shipping held in Greece, an executive with a major banking group cautioned shipping companies: ‘This is the end of the shipping industry as you know it’; 11 banks with over $100 billion in shipping loans have now agreed on an emission baseline to assess climate risk and shipping companies’ ability to meet international reduction targets if their businesses are to continue to receive financing.

To date, ship operators have been following three basic paths to comply with the new IMO mandate: switching to low-sulphur fuel but at a higher cost; continuing to use high-sulphur fuel but installing ‘scrubbers’ to clean the exhaust; or using a cleaner, alternative fuel, such as liquefied natural gas (LNG), which requires engine modifications and the installation of large cryogenic fuel tanks.

In addition, a number of auxiliary propulsion and fuel-saving devices, such as Flettner rotors, fuel cells, solar cells, batteries, kites and sails, are being experimented with, to improve vessel efficiency and reduce pollution. Some are limited to wind-prevalent routes or short runs, where electrical charging can be accomplished from land. Nevertheless, the shift to new technologies, including the use of fuels such as alcohol, biomethane and ammonia, is being accelerated, and it’s changing how ships are being propelled as well as how they are designed.

Exhaust scrubbers
According to ship insurer Gard, nearly 3,000 vessels will have exhaust gas scrubbing units installed by the IMO 2020 deadline, with the first having gone aboard a ship over a decade ago. The retrofit installation of these units, which takes up a considerable amount of space, usually sees them fit in a ship’s funnel by enlarging it, or by the construction of a new housing.

In addition, as seawater is used in the cleaning process, a large amount of new piping is required, along with electrical control cables. Two types of scrubber systems have been developed; closed-loop and open-loop, with the latter returning the seawater with its contaminants to the ocean, while the former treats the water and retains contaminants for disposal ashore.

Although the use of scrubbers cleans exhaust gases, the contaminants remain and some ports have already forbidden entry of ships using open-loop systems. Right now, the purchase and installation of scrubbers can cost shipowners between $2 million and $10 million, depending upon the type of installation, with the work usually accomplished during a regular shipyard visit. Their pay-off is the ability to continue using heavy fuel oil.

Membrane tanks
Although most cargo ship owners have opted for deck-mounted LNG storage tanks, there’s a growing movement to have the tanks installed internally, especially on container vessels where the weather decks and hatch covers are used for container stowage. This is especially true now that French engineering company GTT has developed membrane tanks that can be better shaped to fit a ship’s internal hull configuration.

Such tanks have been chosen for a series of 23,000TEU-capacity container carriers being built in China for French operator CMA CGM. The tanks on these vessels, which will provide fuel for 12-cylinder X92DF main engines of 63,840kW (85,610hp) output, have a total capacity of 18,000m3. This will allow a complete round-trip between Asia and Europe before refuelling is required. Bunkering will be accomplished in Europe by a 18,600m3 capacity tanker being completed in China, which will see over 300,000 tons of LNG delivered to CMA CGM annually. 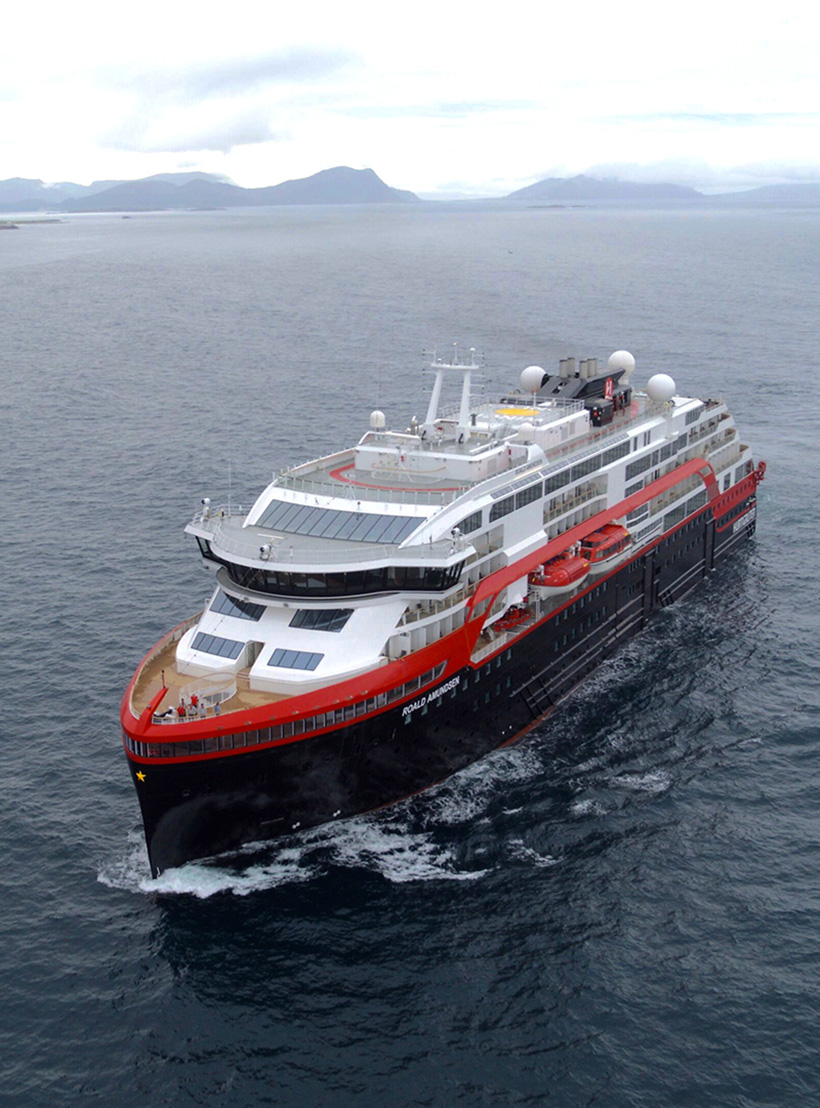 LNG Conversion
Internally-fitted membrane-type tanks have also been chosen for installation in the first large container ship to be retro-fitted to burn LNG, Hapag-Loyd’s 2014-built Sajir, which will undergo the $27 million process at China’s Shanghai Huaran Dadong Dockyard.

The tanks will have a capacity of 6,700m3, which will require the vessel to bunker twice on a round-trip between Asia and Europe. In addition, the ship’s MAN B&W 9S90MEC10 main engine is to be converted to a high-pressure, dual-fuel unit, and will be fitted with MAN’s Pump Vaporiser Unit (PVU), which pressurises and vaporises fuel to the specific pressure and temperature required. As with the AIDA cruise ship, low-sulphur fuel oil will be carried as a back-up and safety precaution.

LNG ore carriers
Internal LNG tanks are also being considered for a large ore carrier being developed by Japan’s Kawasaki Kisen Kaisha (K-Line), in partnership with compatriot shipbuilder Namura Shipbuilding, for the carriage of ore between Australia and China. Because of the high density of the cargo being carried, ore ships traditionally have a large amount of void space in their hulls, portions of which can be used for tank placement. The 250,000dwt ships envisioned will have their cylindrical, LNG tanks arranged in the centre section of the hull.

Although not previously considered for LNG conversion, the demand for dual-fuel ore carriers has increased since mining giant BHP announced it will be tendering for enough LNG-fuelled vessels to transport over 27 million tonnes of ore per year from its mines to consumers. This is about 10% of its annual ore output. 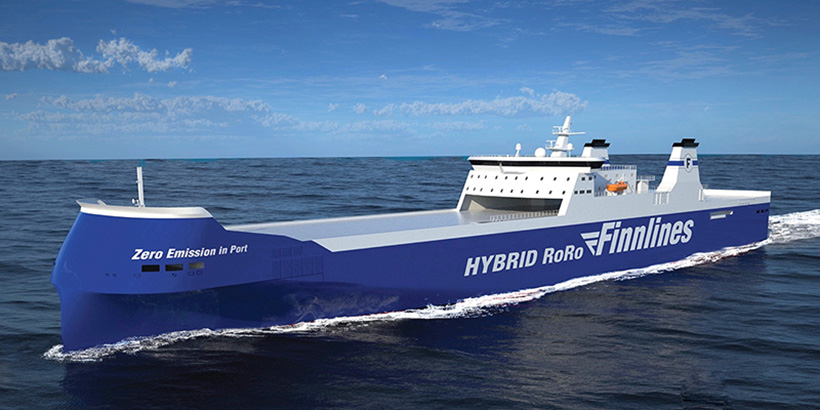 Banking on batteries
LNG is also being used in conjunction with batteries in several applications, including Hurtigruten’s new cruise ship, Roald Amundsen, while battery power alone is propelling a growing number of smaller vessels. In the latter sector, the Norwegian fjords are now being crossed daily by all-electric ferries, while Japan is developing an all-electric bunkering tanker for employment on Tokyo Bay.

The use of all-battery propulsion is also moving into the tugboat sector, following a decision by New Zealand’s Port of Auckland to order an all-electric ship-handling tug from Holland’s Damen Group. Although, to be equipped with two, 1,000kW generator sets for emergency purposes, the tug will not be considered a hybrid because its battery system has been designed to meet all normal operational requirements without working in conjunction with diesels. This will allow it to handle three to four large ship moves before its 2,800kWh battery bank will need to be recharged, which will be accomplished in two hours. 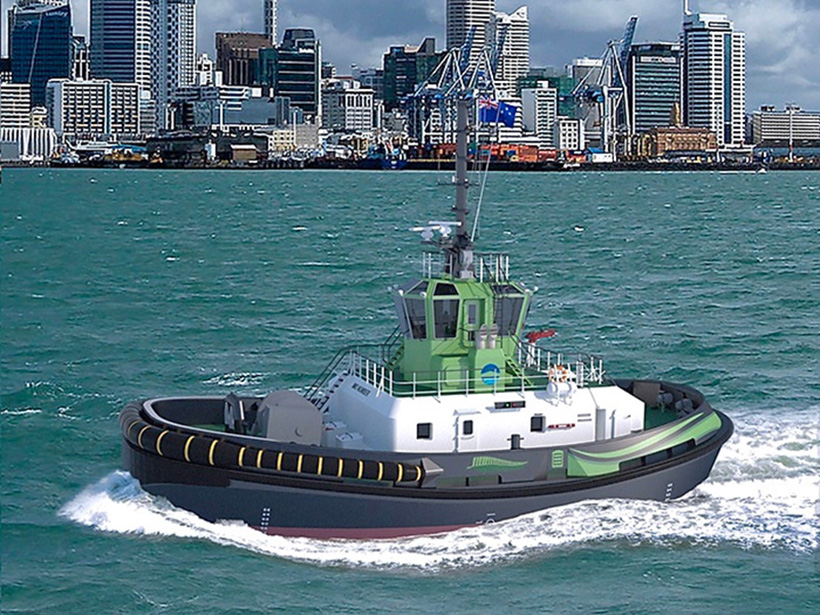 The Port of Auckland has signed a contract with Holland’s Damen Group for construction of a fully-electric ship-handling tug which will make use of two azimuth thrusters powered by a 2,800kWh battery bank capable of being fully charged in two hours.              (Pic: Damen Group)

AIDAperla
In one of the largest hybrid battery applications to date, AIDA Cruises’ 2017-built AIDAperla will be refitted with a battery bank from British Columbia’s Corvus Energy this year, which will produce 10MWh; the largest battery storage system ever installed on a passenger ship.

Corvus, now a leading supplier of lithium-ion battery storage systems, has reduced the volume of its batteries per kWh supplied by 50% over previous batteries, and their weight per kWh by 30%. This is important as the battery pack installed in Denmark’s all-electric ferry Ellen, and supplied by Switzerland’s Leclanché, has a weight of over 55 tons.

As the size and weight of batteries is reduced, their use is expected to increase, but lithium-ion systems can also be hazardous. This was demonstrated in October 2019, when the Norwegian hybrid ferry, Ytterøyningen, suffered a fire and gas explosion in its battery room, an incident that has required more vigilance of the storage systems by their operators. 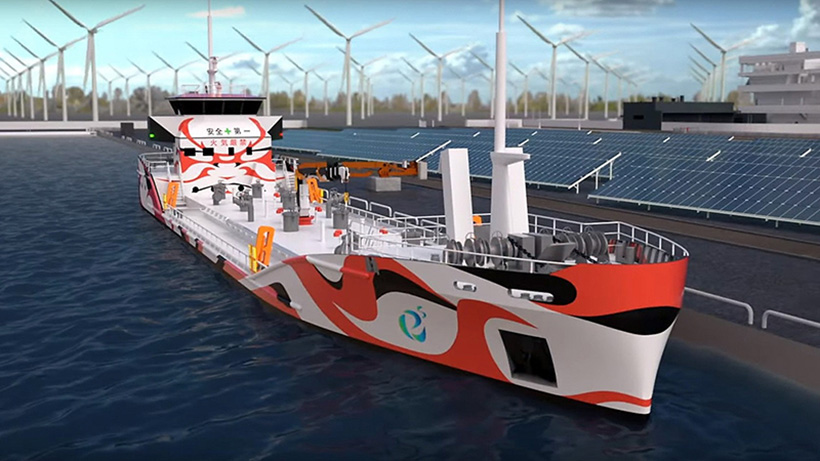 Four Japanese companies, headed by Asahi Tanker, have joined forces to develop a 499gt bunkering tanker for operation on Tokyo Bay which will make use of all electric propulsion based on lithium-ion battery
banks driving a pair of 350kW azimuth propellers. (Pic: Groot Ship Design)

Ventifoils
Beyond rotor sails, a non-rotating wind assist product, Conowind’s Ventifoil system is to be installed on the 3,600dwt general cargo ship, Ankie, operated by Holland’s van Dam Shipping. The 10m-tall Ventifoil units, which have taken three years to develop using financial assistance from the European Union, are modular and shaped as a non-rotating wing element with vents and an internal fan.

They are similar to the TurboSail developed by Jacques Cousteau in the 1980s, but with several refinements to take advantage of boundary layer suction created by their egg-shaped cross-section. Two will be installed on the forecastle of Ankie, and fuel savings are expected to give a payback period for both the product and installation of about three years. 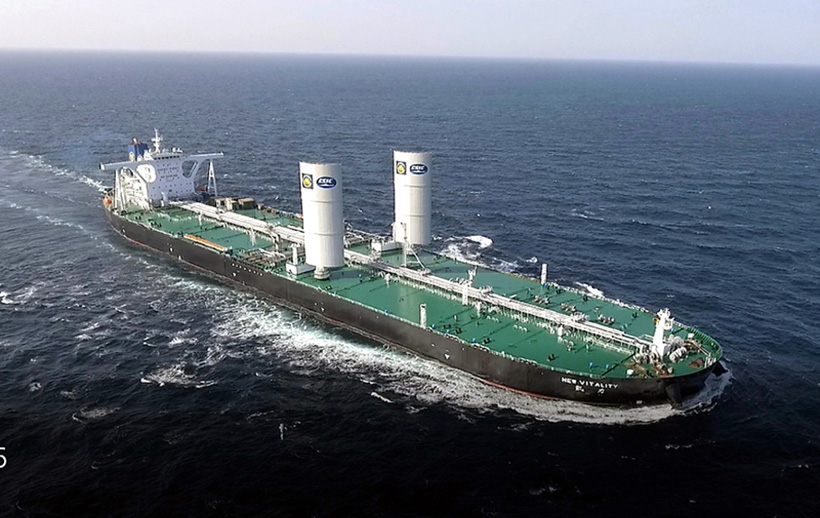 Hydrogen power
The use of hydrogen, both in fuel cells and as a vessel’s fuel, is in its infancy, but there are expectations that it will play a much greater role in the future. Governments view the cells, which combine hydrogen and oxygen in a chemical reaction to produce electricity, while leaving only water as an exhaust, as a way to eliminate pollution, and are financially supporting their development. Several very small excursion craft are already employing hydrogen fuel cells for power, and larger vessels using the gas are now being built.

These include the 20m by 8.2m tug, Elektra, being constructed by the Hermann Barthel shipyard in Derben, Germany, for logistics specialist Behala. Also there’s the 84-passenger ferry Water-Go-Round, that’s nearing completion in California. A larger and faster ferry using fuel cells is being developed in Norway by Hyon AS, in a government-sponsored project that’s also developing a fuel-cell-powered coastal container ship.

As the technology is refined, there are estimates that, within five years, vessels using hydrogen fuel cells combined with battery storage systems will make up a significant segment of northern Europe’s coastal fleet.

Hydrogen is also being considered as a fuel in itself, and the Port of Antwerp has ordered the world’s first hydrogen dual-fuel tug from Compagnie Maritime Belge, which will be powered by combustion engines burning hydrogen in combination with diesel fuel. The ultra-low-emission ‘Hydrotug’ will be equipped with a particulate filter and catalyser to complement its dual-fuel system, allowing it to fully comply with the EU’s Stage V emission standards when it enters operation in 2021. 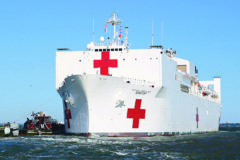 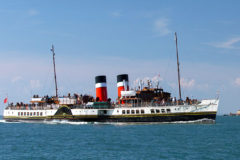 Save the paddle steamer!