While a Muir-Hill tractor may not have the following enjoyed by similar County and Roadless models, it still offers an attractive alternative. 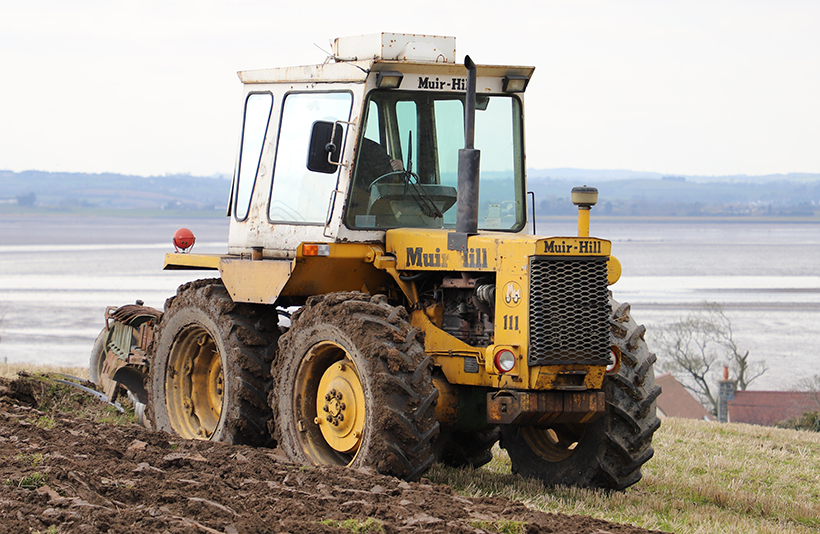 Today, the Muir-Hill name is synonymous with powerful, four-wheel-drive tractors, but this wasn’t always the case. In days gone by, the company was a successful producer of dumpers, loaders and railway shunters, but entered the agricultural arena in the mid-1960s with the 101 – based on a Ford 5000. To the untrained eye, a Muir-Hill tractor is simply a yellow County, but a closer look will reveal that the basic design makes one of these tractors an altogether different proposition. Due to the fact that, in crude terms, all Muir-Hill tractors are the same – a Ford rear end mated to a drop or transfer box and powerful engine, and fitted with equal-sized wheels – this is a basic guide and anyone intent on buying one should consider the intricacies of each model carefully.

Engine issues
If you’re thinking of buying a Muir-Hill tractor, you’ll find either a Ford or Perkins engine under the bonnet. Due to space limitations, we’ll refrain from going into great detail here but, as with any engine, there’s a basic checklist of common faults that can be easily identified. Many of these can be straightforward and relatively inexpensive to remedy.

An initial glance will give you a feel for whether the tractor, and engine ­– in particular – has been looked after. Is it caked in oil, diesel and grime? Do the filters appear to have been changed? Some of these tractors are more than 50 years old and that means leaks and wear is inevitable, but neglect is a different ball game.

Check the oil on the dipstick and make sure that it’s not creamy – an indicator of water contamination. Black oil is part and parcel of diesel engines, but look out for anything more sinister while doing your initial appraisal. 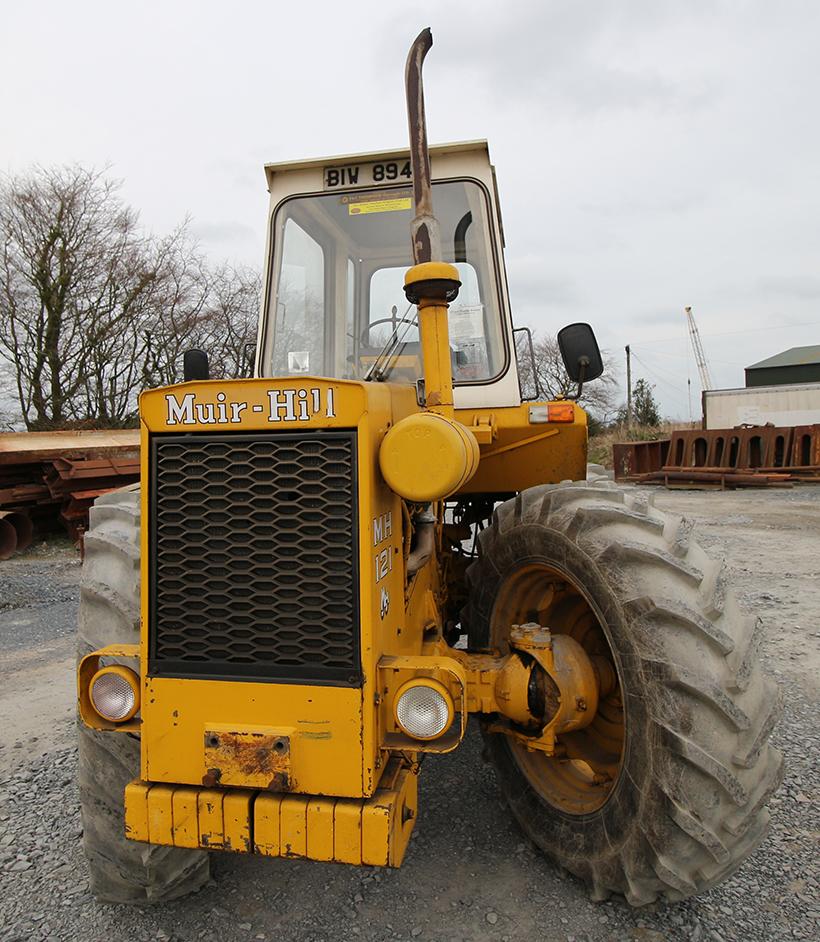 For a tractor with equal-sized wheels, the steering lock is impressive. The turning circle of this 121 Series II is 31ft 1in (9,474mm).

It’s also a good idea to check the cooling system before starting, too. Check for water pump leaks from perished seals, hoses and the like and, although these are relatively cheap and inexpensive fixes, they’re something to bear in mind when negotiating a price.

Check the radiator for anti-freeze – a bright-coloured tinge to the water usually indicates that it’s been regularly topped up with anti-freeze/coolant. Whereas, brown/muddy-looking water is a sure sign that there’s some rust in the water and it hasn’t seen an additive for a while. Oil on the surface of the water can be an indicator of head gasket problems.

Irrespective of the condition of the water in the radiator, give the engine block a thorough inspection. Cracks can be hard to spot, so be sure to look behind filters and other ancillaries before assuming that the block is in good order.

Fuel leaks will often be found, but these are often due to age-hardened seals and the like, so don’t be too disheartened to find these. The fuel-injection system will usually reveal its problems when the engine is running, so take particular note when you get the tractor up and running.

When you start your potential purchase, it’s always a good idea to start it from cold, wherever possible. Failure to start satisfactorily can be down to electrical problems, as well as fuel-related issues, so have your eyes and ears open when you strike the engine up for the first time.

Copious amounts of smoke are never good, irrespective of colour, so give the engine a chance to warm up before drawing your conclusions. As these tractor were designed to be serious workhorses, some will have had the injector pump ‘opened-up’ to provide more power, and this is where plumes of black smoke will appear – due to a pump issue and/or injector(s) problem. 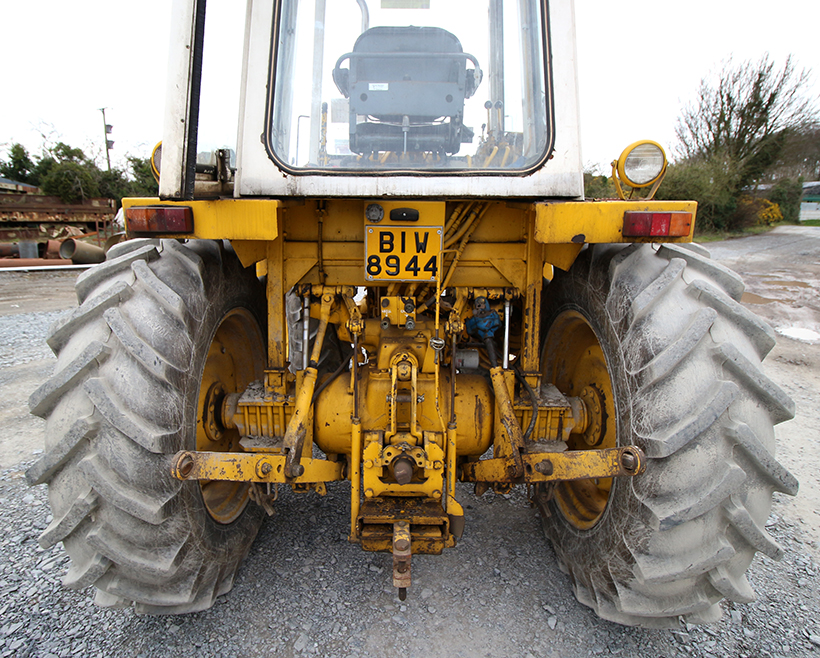 The rear end will be familiar to Ford fanatics.

Look out for lots of white smoke (an indication of head gasket failure) and blue smoke, too. This is a tell-tale sign that the engine is burning oil, and suggests that the pistons/rings are worn, allowing oil to pass where it shouldn’t, or that the turbocharger has a problem – if fitted.

With used Ford and Perkins engines and new parts plentiful, don’t be overly concerned about engine problems but, as already stated, it is advisable to factor in the cost of repair when negotiating the price of your potential new steed.

Transmission
Standard spec on a Muir-Hill is a dry, single-plate clutch and problems in this department are much the same as any other tractor – a worn or warped friction plate, or one that has seized on the splined shaft. 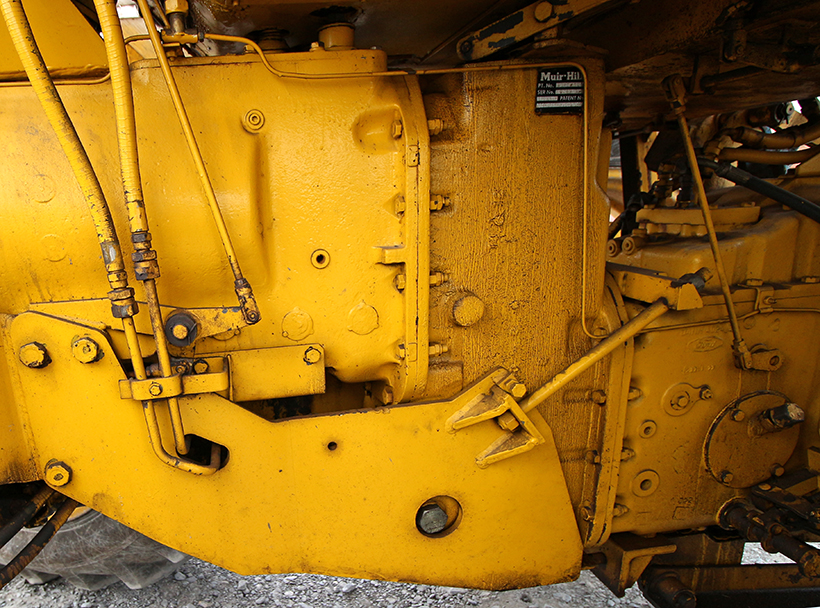 The transfer box enables the engine to be mounted higher than the Ford rear end, dispensing with the need for a side-mounted propshaft(s) to drive the front axle.

Such issues can make it difficult to get the tractor into gear, or make it creep, but gear selection problems can also be down to worn selectors or incorrect oil. Where possible, try all gears and ranges to ensure that there are no nasty surprises should you go ahead with the purchase. Listen out for suspicious noises, particularly if they only occur in a certain gear, or gears, but don’t confuse this with the distinct sound of the transfer box – or ‘drop box’ as it’s otherwise known.

A high-pitched whining noise from the transfer box, when the tractor is under load, is commonplace, so don’t be put off by that – but take note of anything more sinister. This sub-assembly is pure Muir-Hill, and can be a problem with these tractors. The majority of Muir-Hills will have been worked hard and, if the servicing schedule hasn’t been observed, there could be issues in this department.

The transfer box shares oil with the rear axle and, on early tractors, a pump in the transfer box draws oil up to a spray bar. Later models will have forced lubrication from the main hydraulic pump and, if the pipe spraying oil onto the gears becomes blocked, this can lead to complications. Plus, don’t forget to pay attention to the Dual Power system, where fitted. This doubled the number of speeds available.

Early tractors will have the Ford 5000 rear end, but this was replaced by the 7600 rear end after around 10 years of tractor production. Oil leaks are a common problem, due to age-hardening of seals, but you shouldn’t expect any major problems in this area.

Part of the Ford design was integral, wet disc brakes and these are usually very good. However, a lack of oil will cause the friction material to disintegrate and this will lead to excessive ‘squawking’ and inefficient stopping power.

Steering and front axle
The front axle is another element of the design that’s unique to Muir-Hill tractors. Like any front axle, driven or otherwise, if the tractor has been worked hard you can expect to find a lot of wear – usually in the pivot pin and/or bushes.

Comprising dozens of individual components, the front axle design allows for a decent steering angle, compared to the likes of County and Roadless machines, but a good maintenance regime is essential if it’s to stay in acceptable order. The CV joint boots have a tendency to split, which allows dirt to penetrate and cause component wear. 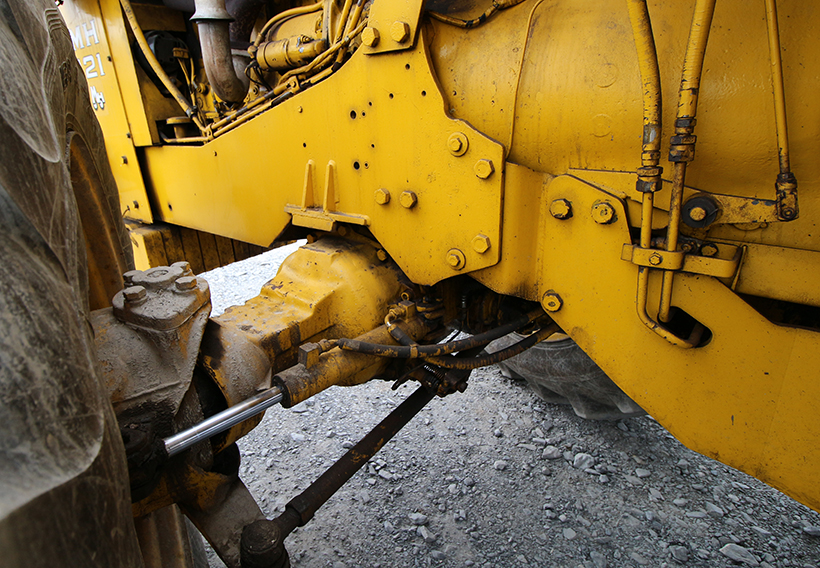 Bushes, seals and O-rings are available to overhaul the axle, but significant wear to castings may mean that specialist machining is the only viable option. Be sure to check the wheel centres, rims and lugs for cracking, too – as this was commonplace, particularly where 12x38s were fitted.

Hydraulics and PTO
By their very nature, Muir-Hills have been worked hard and some will have been abused. So, look for wear in the linkage, including bent components, and make sure that it lifts properly. Try picking up an implement wherever possible. The hydraulic pump will often need attention and, if in need of replacement, be prepared to part with several hundred pounds. 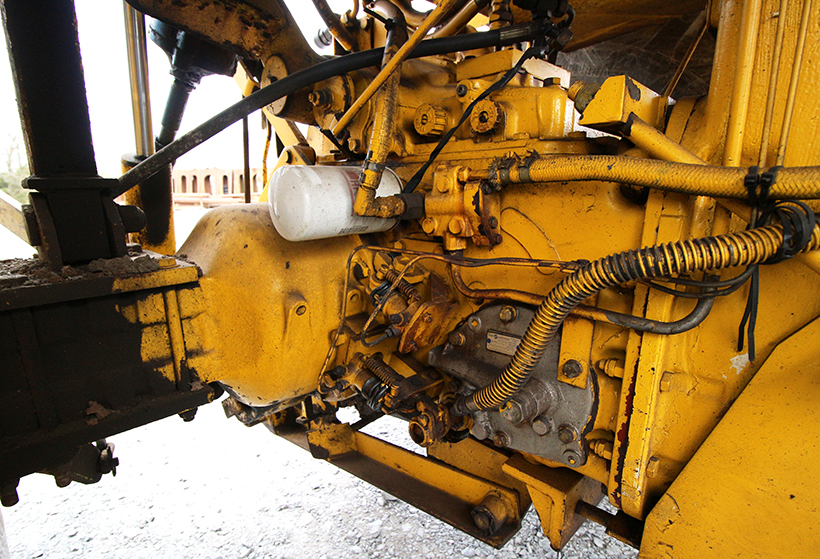 it’s fairly easy to gain access to the hydraulic system from under the cab.

Pick-up hitches were also known to receive extreme punishment, so check that it’s sufficiently bolted to the casting, and not sporting any broken components. Due to the design of the casting, pick-up hitches from later Ford tractors can be fitted with relative ease, and any other areas of concern can be addressed with parts from any Ford tractor specialist.

A single- or dual-speed power take-off will be fitted, dependent on model and options selected, and this isn’t an area of concern. A hand-operated lever provides independent control of the PTO.

Operator’s area
It’s quite a climb up to the platform or into the cab of any Muir-Hill tractor. Most will be fitted with a cab, complete with sliding door and, as the nylon rollers wear, this has a tendency to start sticking – but a ball-race door track can be purchased to alleviate the problem.

With a flat floor and good all-round visibility, it’s a nice environment – but later models have better vibration-dampening properties, so bear this in mind when considering a purchase. Check that any rubber mounts supporting the cab aren’t worn away or perished. 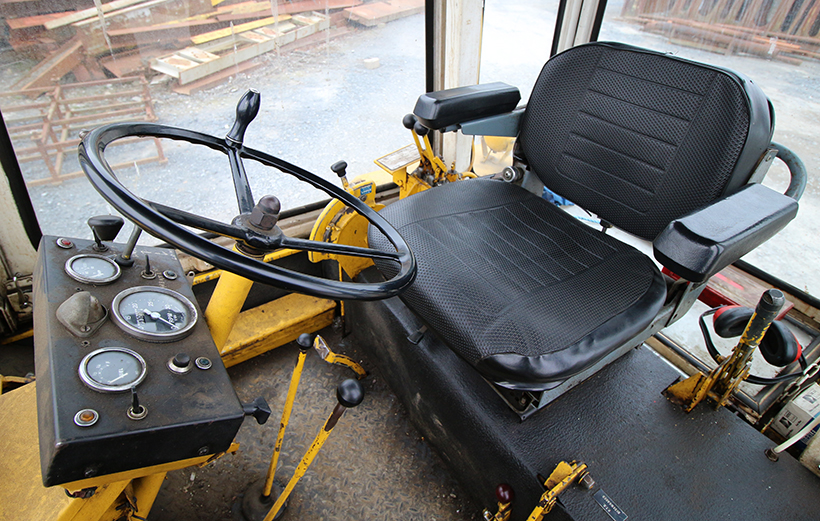 There are no side-mounted gear levers, but there is a flat floor!

While looking at the cab, be sure you check for rust. The steps are prone to rot and the mudguards are also an area of concern. Check around the base of the windows too, as these can trap water and suffer from excessive rust.

One area that Muir-hill buyers often overlook is the top of the cab. Before entering the cab, take note of the roof area and any damage sustained due to the tractor’s height. Take care when undertaking such an inspection.

In summary
As always, good original examples will command a premium, but you can pick up a Muir-Hill for as little as £6,000. This is likely to be a non-running, off-farm example requiring extensive work, but could be an attractive option if you intend to undertake a full restoration.

The 121 is a popular model and can be found for £7,000, but £10,000-15,000 is more likely for a decent tractor – particularly if it’s a Series III model. Depending on your circumstances, a Muir-Hill can represent good value for money, and it’s the type of machine you can fix yourself if your mechanical know-how is reasonable. 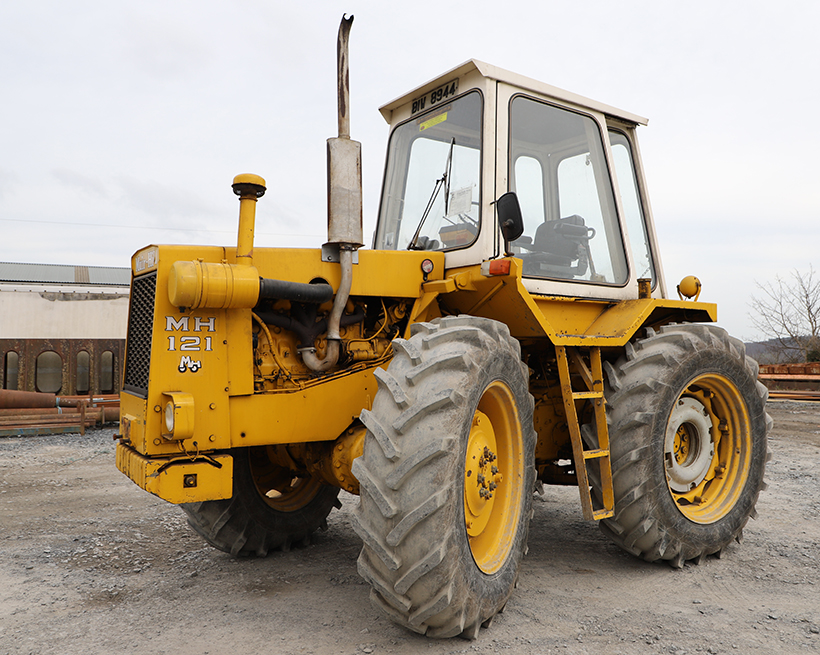 Powered by a Ford 2715E six-cylinder engine, with a Simms Minimec injection pump, the Muir-Hill 121 produced 120hp and 280lb/ft of torque.

As a prime mover on a farm, a Muir-Hill is obviously dated and uncomfortable in comparison to anything built from 1990 onwards, but it’ll still do the job it was built for. If you’re an enthusiast, a Muir-Hill can represent a good alternative to the equivalent County or Roadless machine. Countys, in particular, tend to command a premium and, although a Ford ‘Q’ cab will have the edge on the Muir-Hill’s lofty, sliding-door unit, the tractors’ performance won’t be noticeably different.

Ford-related parts can be purchased from New Holland dealers or the plethora of specialists, but West Yorkshire-based Lloyd Loaders (MH) Ltd. is the proprietor of the Muir-Hill name and business, and can supply genuine Muir-Hill parts. Richard Lloyd has more than 30 years’ experience, and is always happy to answer queries.

Do your homework and, as is so often the case, buy the best example you can afford, as it will probably mean less expense further down the line.

Thanks to Jim Ormerod of Smallholder Services for his help in producing this feature. 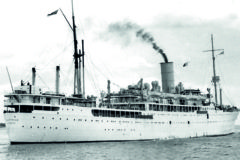 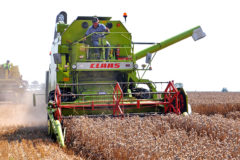