The Gibson family were famous photographers of shipwrecks around the Cornish coast. Here’s a fascinating sample of their outstanding images. 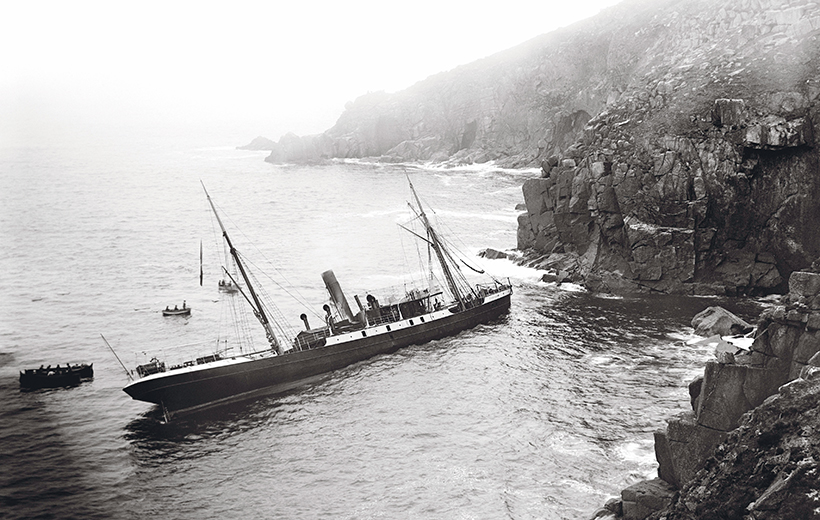 Shipwrecks around the Cornish coast: The steamship Paknam was on her maiden voyage from Glasgow to Le Havre with a cargo of pig iron and coal when she ran aground on on the north-western Cornish coast in thick fog on the morning of 13th May, 1895. The Gibsons managed to capture the precarious situation of the ship aground below the rugged cliffs. Paknam carried a few passengers in addition to cargo. Like many steamships of the era, the 210ft-long ship was also rigged for sailing with two masts. When the ship hit the rocks, water rushed into the bow, but the stern remained afloat. After an hour, a ship’s boat was sent ashore to summon help and a coastguard raised the alarm. People brought lifebelts, ropes and rockets in readiness for a rescue operation, and the captain chose to send some of the crew to shore while he and the remaining men attempted to free the ship, but their efforts were in vain and they went ashore.

For over a century, five generations of the Gibson family photographed shipwrecks around the coast of Cornwall and the Isles of Scilly. They worked with determination and perseverance to document vessels that had run aground or been stranded, dashed against rocks or sunk in the waters around the Isles of Scilly and Cornwall, widely regarded as some of the most treacherous for seafarers. 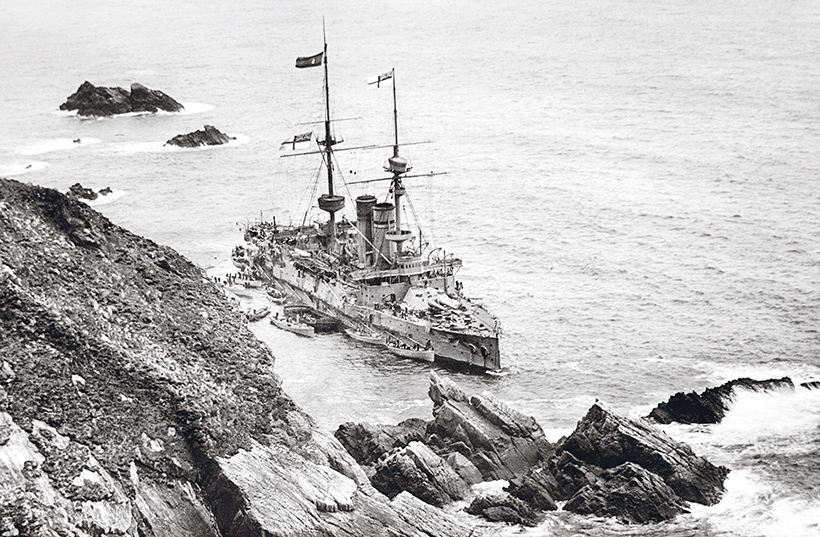 HMS Montagu 1906: On 30th May, 1906, the British battleship HMS Montagu was on her way back from manoeuvres when, in dense fog, she ran aground at Shutter Point, on Lundy’s south-western coast. The Royal Navy sent help, including a battleship, a cruiser and two tugs. Fortunately, none of the 760 men on board lost their lives, but several were injured, and the ship took on a great deal of water through a huge gash in its hull…

With so much maritime traffic using the shipping lanes which passed the Isles of Scilly and Cornwall, wrecks were commonplace in an era when manual navigation techniques were the norm, and weather forecasting was somewhat limited. 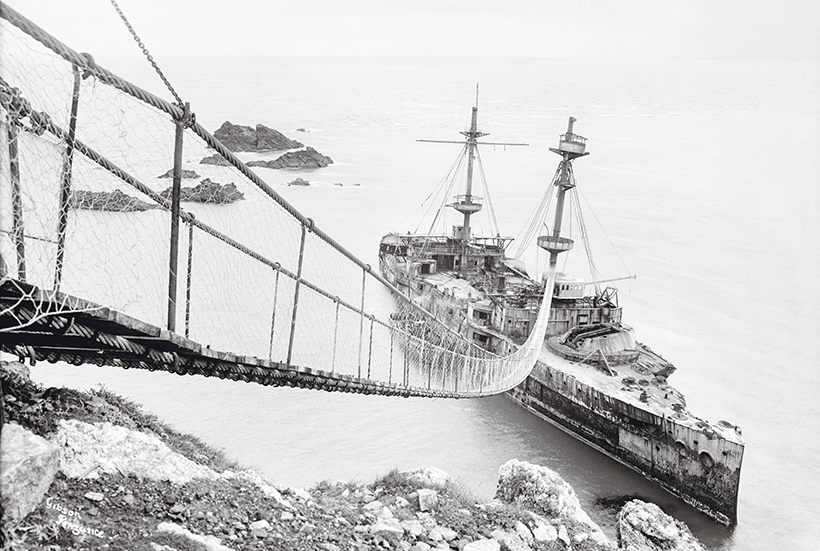 … Many of the crew were safely landed, and the officers found refuge on the island. Initially the plan was to free the ship by removing most of its medium- and small-calibre guns, ammunition and other equipment, then pumping out the water. This plan had to be abandoned, however, as the damage was too extensive, and the salvage operation was halted that autumn. The ship’s senior officers were later severely reprimanded and dismissed from the service, and the wreck was sold for scrap the following year.

The Gibson family regarded the images as artfully produced records of dramatic events. The photographs generated income when shipping companies bought prints to use in support of their insurance claims. The Gibsons also produced photographs to sell to the public as souvenirs. 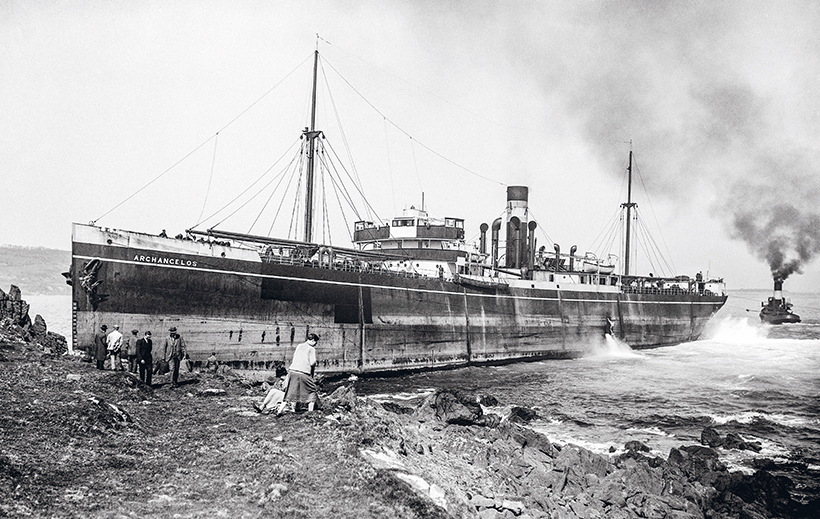 Archangelos 1929: The Greek steamer Archangelos was travelling in ballast from Dunkirk to Newport in south Wales when she ran ashore in foggy conditions near Coverack, on Cornwall’s south coast, on 17th April, 1929. The fog was so thick that Archangelos only saw the Admiralty survey ship Beaufort when the vessels passed within 100ft of each other. The lifeboat crew were summoned and had to search in the fog for some time, but eventually found Archangelos stuck on the rocks. As the sea was calm and there was no danger to life, the captain opted to stay on board, and the lifeboat and its crew were able to return home. Eventually some of the crew and the captain climbed down a rope ladder and came ashore. The following day the crew brought some powerful pumps to, unusually, pump water into Archangelos in order to tip the ship onto its side. On 20th April the Falmouth tug Triton and the steamer Northingate managed to refloat Archangelos, which was then taken to Falmouth for repairs.

In 1946, the fourth generation of Gibsons took up the photographic mantle, when James’ son Frank began working for his father, aged 17. After Frank bought out his father, he opened a small shop that did a brisk trade in books, souvenirs and ornaments. Today the shop is run by Frank’s daughter, Sandra, who, when her father died, felt that the unique photographic collection should be preserved, and the National Maritime Museum in Greenwich, London, acquired the collection at auction in 2013. 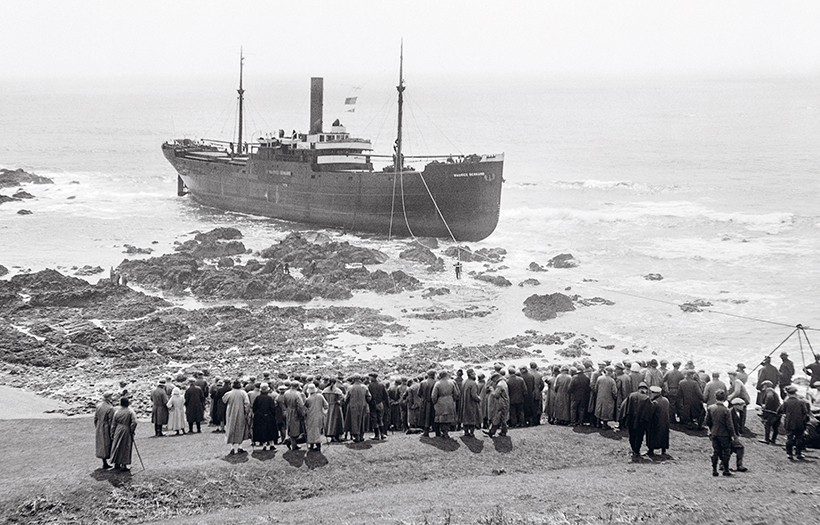 Maurice Bernard 1925: The French cargo vessel Maurice Bernard was caught in a storm in the English Channel while she was travelling between Rouen and Port Talbot. Having ventured too close to the shore near the Lizard peninsula, the ship ran aground at Kennack Sands on 25th May, 1925. The Lizard lifeboat was launched to help, but conditions were so severe that the lifeboat couldn’t get near the stricken vessel. Instead, rescuers used a rocket apparatus to fire a line out to the ship. The photograph shows one crewman coming ashore in the breeches buoy, and also reinforces the idea that such rescue operations were viewed as spectacles rather than terrifying ordeals for those involved. Maurice Bernard came to rest with her bow and amidships on the beach. Part of her bilge keel was torn away. Temporary patches were applied before an attempt was made to refloat the ship and, in early June, the tug Victor helped get the ship off the rocks and tow it away for repairs. 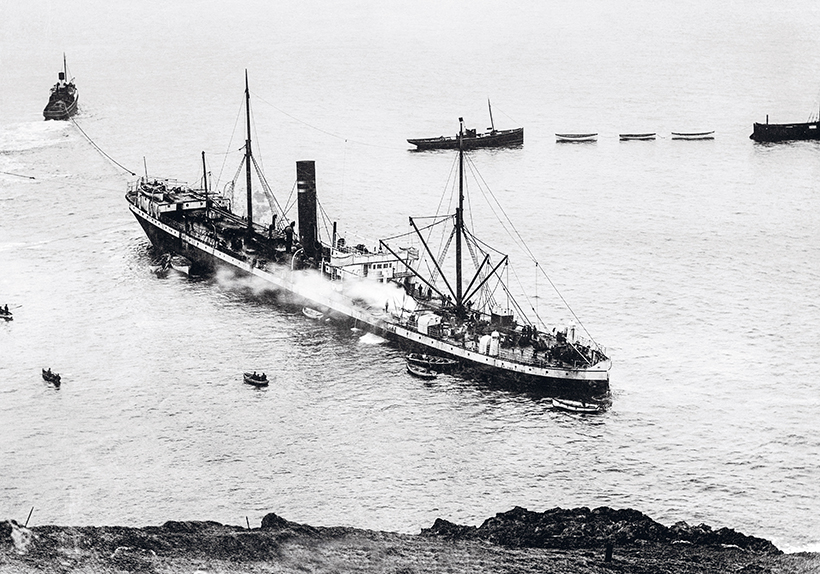 Highland Fling 1907: The steamship Highland Fling was en route from London to Buenos Aires with a cargo of 3,000 tons of cement in barrels when she developed a small leak. She put in to Falmouth for repairs and, after being temporarily patched-up, headed for Cardiff. Soon after leaving Falmouth, Highland Fling encountered fog, went off course and ran aground near Cadgwith, a few miles northeast of the Lizard, on 7th January, 1907. Repeated attempts to get the ship off using tugs failed. Captain Anderson, from the Western Marine Salvage Company of Penzance, was tasked with salvaging Highland Fling, and decided to blow the ship’s bow section off with dynamite. This highly unusual action proved successful, and the bow was left in place while the stern was towed to a dry dock in Falmouth, where the various valuable items on board were removed. As the stern was not worth reusing, it was scrapped, while the bow section, still on the rocks, broke up and sank in a gale a few weeks later. An investigation into the wreck determined that the cause of the accident was navigation error. 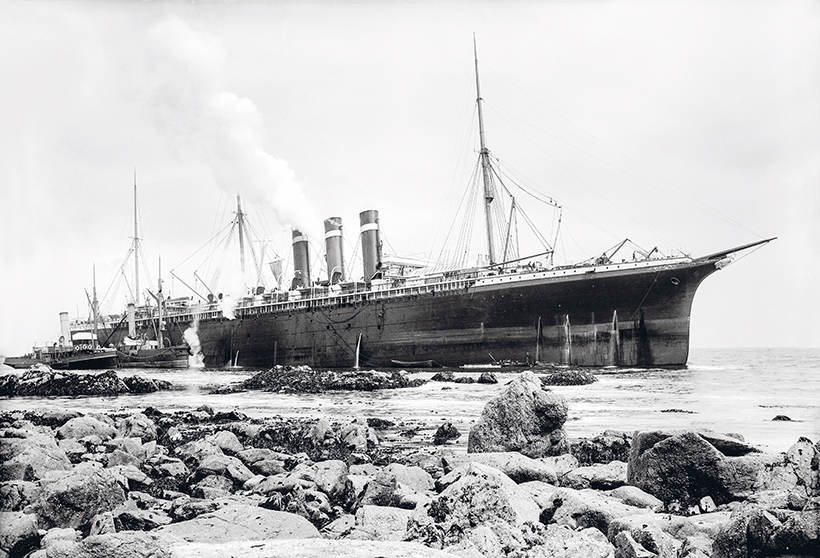 Paris 1899: The competition to achieve the fastest transatlantic crossing, and gain the prestigious ‘Blue Riband’ award, involved shipping companies from Britain, Europe and America. The British-based Inman Line had two ships built in 1888, City of Paris and City of New York, to challenge the record, and the former set four Atlantic crossing records, including an impressive 20.7-knot average speed in 1892. Following the merger of the Inman Line with its American creditors, International Navigation Co, in 1893, the ship was rechristened Paris and, on 21st May, 1899, the 527ft-long liner, en route from Southampton to New York, with 380 passengers and more than 300 crew on board, ran aground just after 01:00 on Lowland Point, near the Manacles. The passengers, initially reassured by the crew and provided with tea and coffee, later boarded lifeboats and transferred to a local tug, which took them to Falmouth. Paris was later pulled loose from the rocks and taken to Belfast for repair. Renamed Philadelphia, she returned to passenger service between America and Europe in 1901. 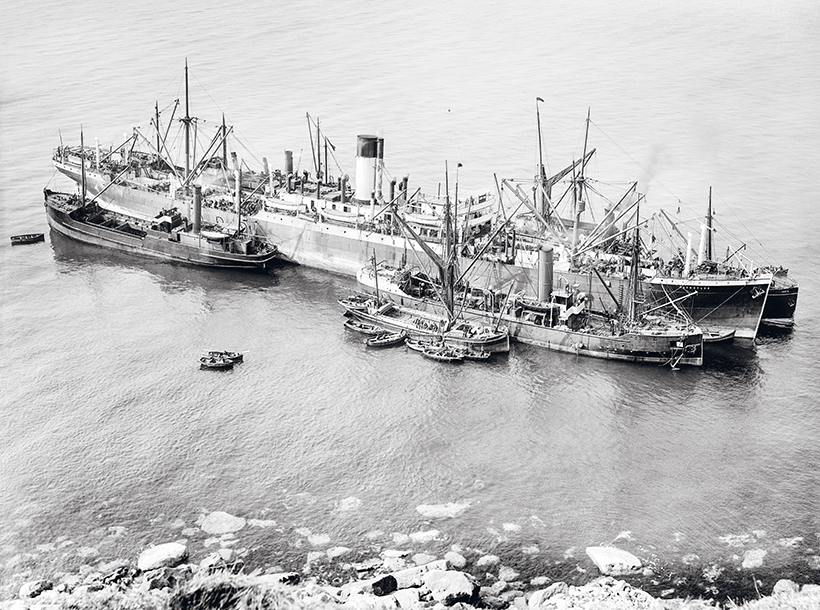 Patroclus 1907: Patroclus, with a cargo of wheat and wine destined for Liverpool, was on the final stage of a long journey from Adelaide in south Australia, when miscalculations in the crew’s navigation resulted in the ship running aground off Blacknor Point, Portland, on 13th September, 1907. The accident caused several holes in the hull and the ship started to take on water. Fortunately, there was no loss of life. The extensive salvage operations that followed involved lightening the ship of her cargo and repairing the damage to the steamer’s forehold before an attempt was made to tow her off the rocks. The photograph records the extent of the salvage operations, with the salvage vessel Linnet off the starboard bow and the spritsail barge Thistle alongside it. The coaster Annie is moored to Patroclus’ starboard quarter. An unidentified coaster and barge are off the port side.