James Hendrie tells the fascinating story of the Royal Navy’s first submarine, Holland 1, which is now on display in Gosport. 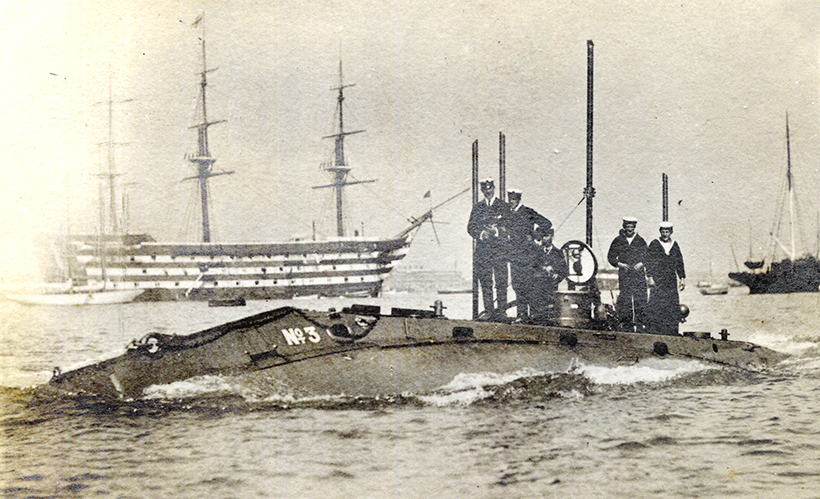 The Royal Navy’s first submarine: Holland No.3 passing HMS Victory in Portsmouth harbour. The Holland class comprised five submarines in total, each with a crew of eight. (Pic: Campbell McCutcheon)

Holland 1 was the Royal Navy’s first submarine. It was a significant craft in the development of the submarine as a weapon of war. Designed by American John Phillip Holland – after whom it was named – it was launched in 1901. Originally, the Admiralty didn’t want to be involved but, with other countries developing submarines, they soon ordered five such craft. 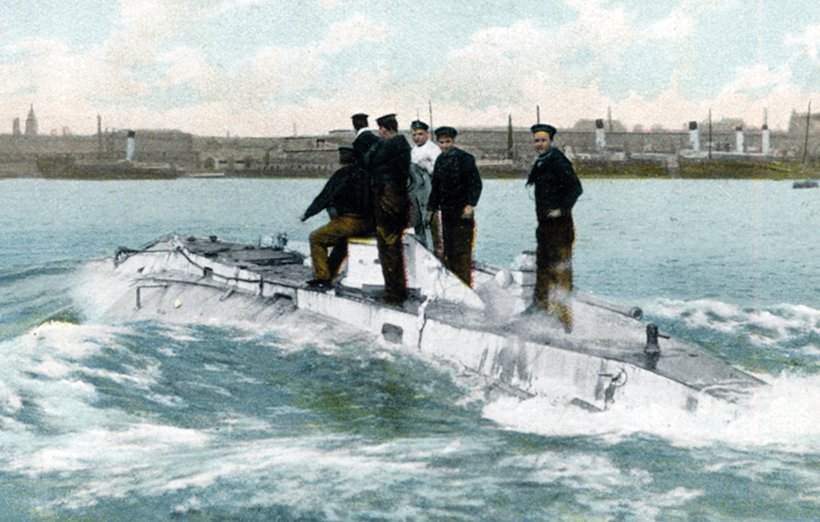 The biggest issue with the Holland class submarines was their low freeboard. This view shows one entering Portsmouth after a storm in the Solent. Riding on the surface in anything but calm weather must have been a terrifying experience for the early submariners!

Vickers Sons & Maxim Ltd, at Barrow, built the five, originally numbered Holland 1 to Holland 5, under licence. There were some initial problems in the translation of the plans from America, and some modifications were made, including the addition of a periscope. Holland 1 was the first of the class, and introduced three new technologies; the electric motor, the battery and the internal combustion engine. 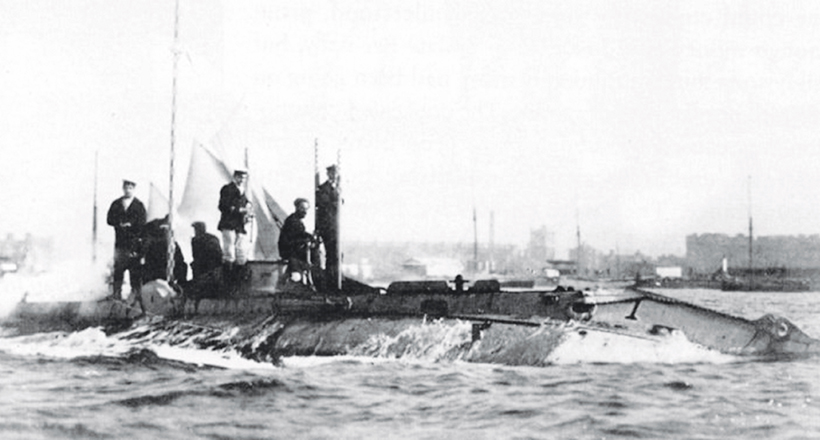 Holland 1 was launched on 2nd October, 1901, and dived for the first time (in an enclosed basin) on 20th March, 1902. Sea trials began in April 1902, by which time another two Holland class submarines had been launched. However, such was the speed with which submarines were being developed, that the Holland class was soon superseded by the much larger D class boats; the Royal Navy’s first class of submarine capable of operating significantly beyond coastal waters. 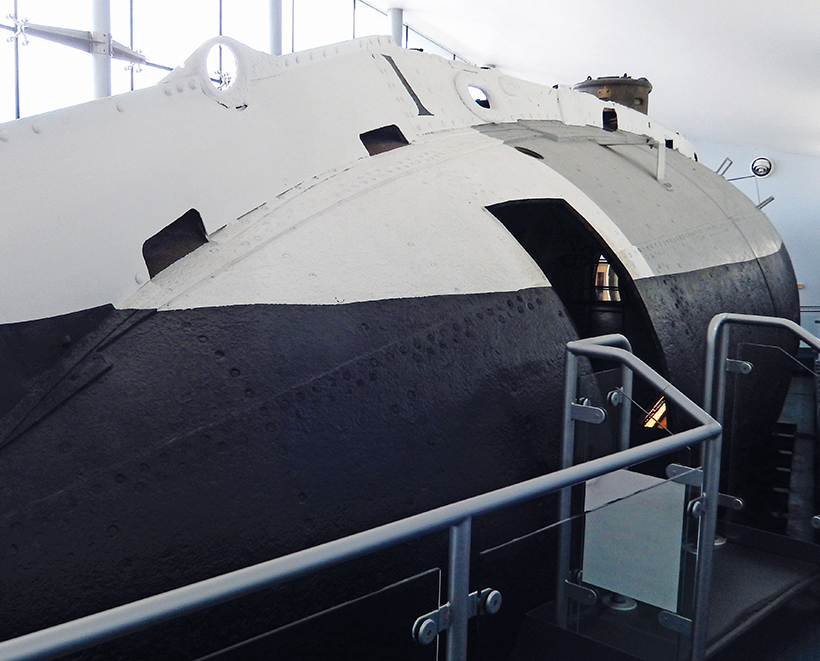 Holland 1 on display: the outer hull is well preserved. The Holland Gallery at Gosport is maintained at less that 40% relative humidity. Visitors are able to look inside the submarine and see its internal mechanisms. (Pic: Robert Edmonds)

In 1903 there was an explosion on board Holland 1, which result in four crew being injured. The only operational deployment undertaken by the submarine came in October 1904 when, with the rest of the Holland fleet and three A class boats, she sailed from Portsmouth to attack a Russian fleet that had mistakenly sunk a number of British fishing vessels in the North Sea, in the Dogger Bank incident.

Holland class submarine no.2 at Barrow in Furness. Vickers-Armstrong had the facilities to build the submarines licensed from America. The initial design was very close to the Holland designs in the USA, but there were small differences.

However, the boats were recalled before any attack could take place, and Holland 1 saw out her Royal Navy service as a training craft until 1913. The Holland class boats were found to be difficult to handle both above and below the surface, and this was one of the reasons that the boats never saw operational service. 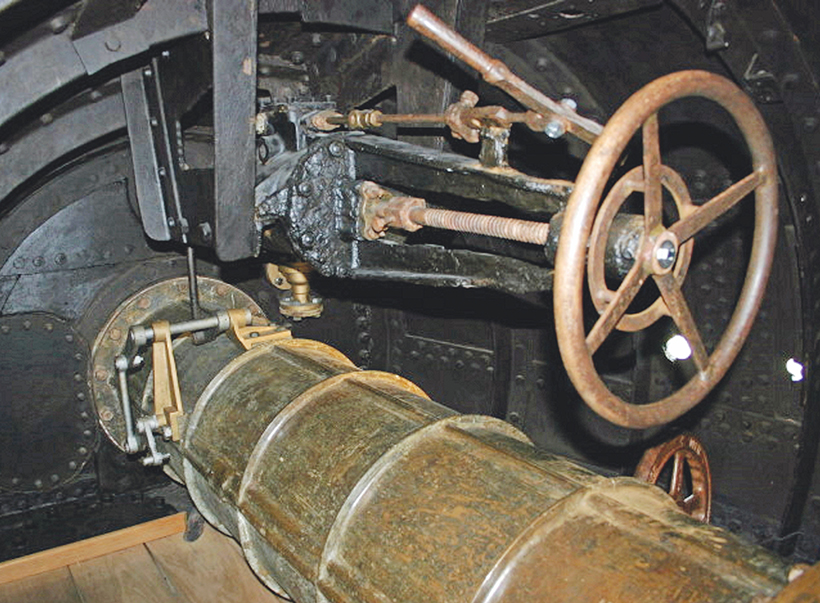 In November 1913, Holland 1 was decommissioned and sold to TW Ward. However, while under tow for scrapping, she foundered and sank off the Eddystone Lighthouse. There she lay until 1981, when Royal Navy divers discovered her wreck, at a depth of 63m, and she was raised. She was moved to the Devonport naval dockyard and then to dry dock, being lifted onto a purpose-designed cradle. Water was pumped out of the dry dock and Holland 1 could once more be seen. An initial inspection showed that she was in remarkably good condition, with only the odd hole in her hull. 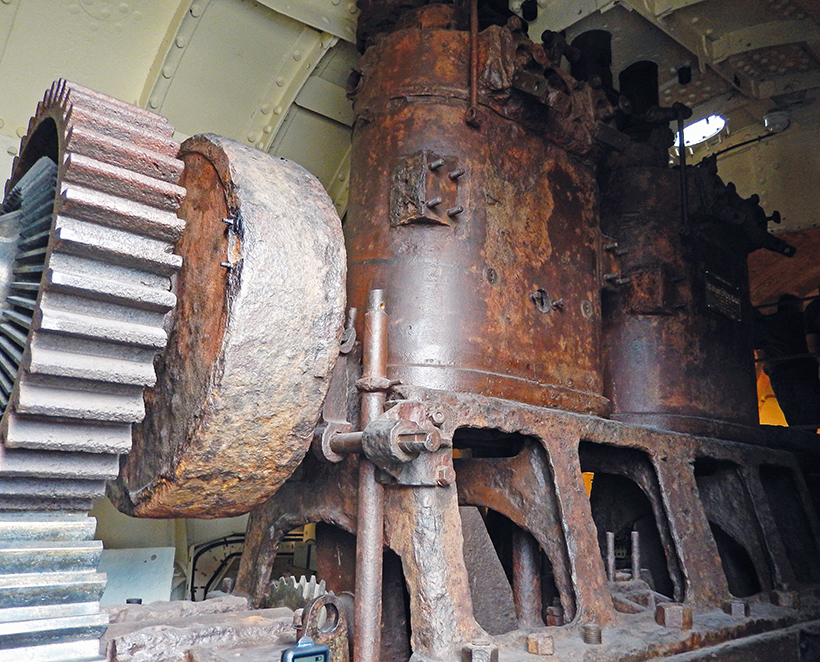 There followed a period of works to remove the rust from her hull, then to spray her with preserving chemicals to ensure her long-term preservation. As the rust was removed, the condition of Holland 1’s hull offered a glimpse of what she would have looked like at her launch. 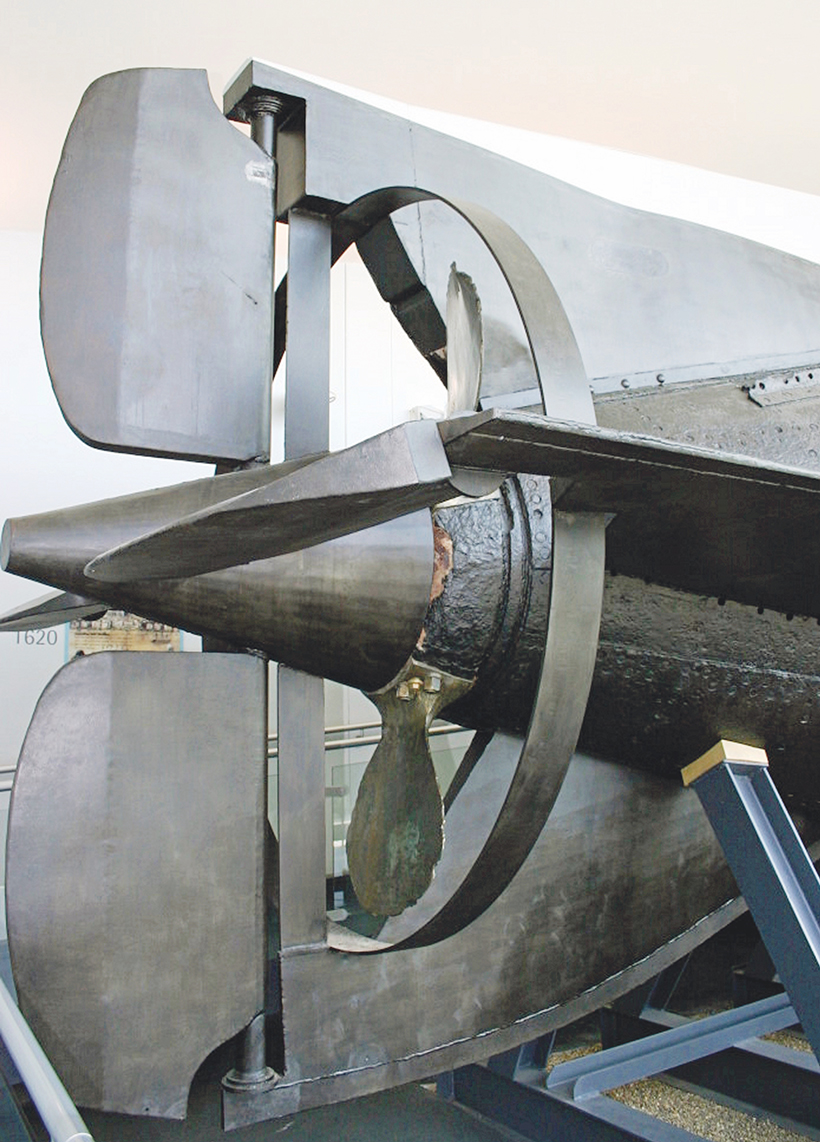 The rudder and propeller.

Moving the boat to The Royal Navy Submarine Museum in Gosport for display necessitated cutting her hull into three parts but, once at Gosport, she was reassembled and opened to the public, enabling this historic and trail-blazing craft to be seen at first hand. For over a decade, visitors came to see Holland 1, but her hull was still ‘drenched’ in chlorine, and she started to deteriorate and corrode. Drastic and innovate action was required, and a complex conservation process was initiated to ensure that Holland 1 had the best chance of survival. 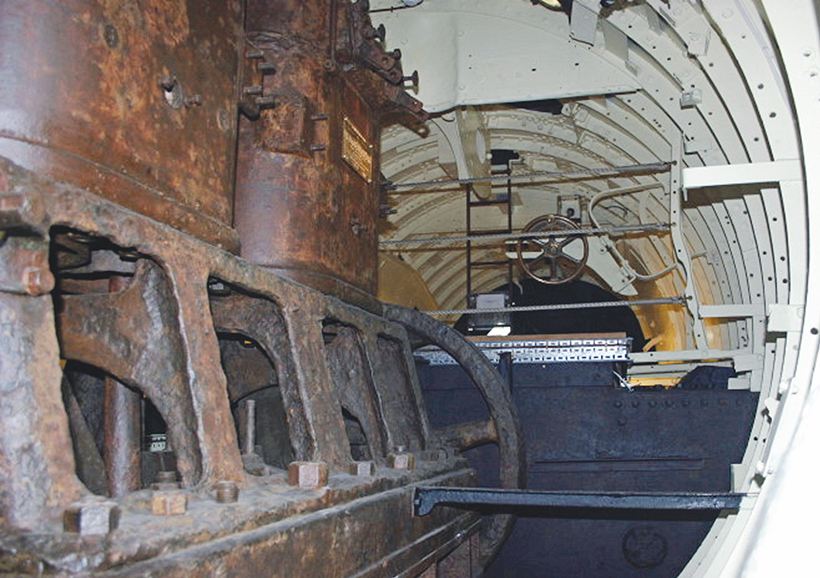 Inside the hull of Holland 1.

By 1998, the balance of chloride within the hull was at an acceptable level, so the preservation process moved to preventing the issues reoccurring. A new, specially-designed, dehumidified gallery was built at the museum to house and display Holland 1, and she remains in this specially controlled environment. This gallery was opened on 17th May, 2001, 100 years after she was launched.

Various items from Holland 1 are on display with the boat. On the wall in the gallery hangs a framed display, which contains her bulkhead clock, nameplate and maker’s plate. All these items were removed from her prior to scrapping and are, therefore, in excellent order. Her maker’s number – 280 – can be found stamped on some of the components with which she was fitted. 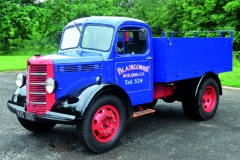 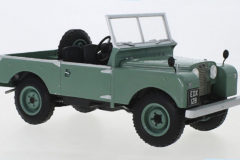