Patrick Knight offers an insight into the rare Ingeco stationary engines that were built in the Untied States before the First World War. 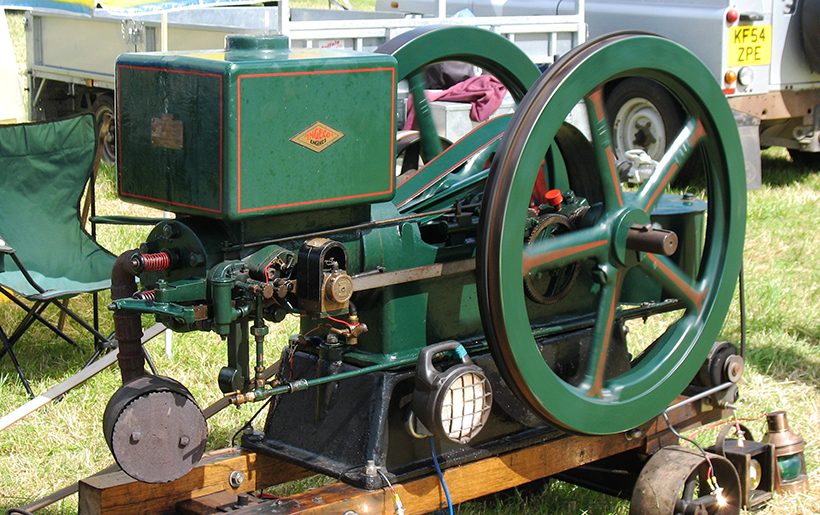 This is the 6hp Ingeco engine, s/n 15630, owned and exhibited by Bernie Moore from Milbourne St Andrew, in Dorset.

Small examples of the American-built Ingeco engine are something we occasionally see on our rally fields, but the same cannot be said for the larger model, such as this 6hp engine exhibited at one of the Kingsley Rallies by owner Bernie Moore from Milborn St Andrew, in Dorset. The information card accompanying that engine provided the serial number 15630, and explained that the unit had been shipped to the UK during the First World War.

I have a small amount of paperwork relating to Ingeco engines which includes a short list of serial numbers/dates and, while I cannot be 100% sure of its accuracy, it dates engine s/n 15630 as being sold in the UK in 1915.

A brief history
Ingeco engines were built by the International Gas Engine Company of Cudahy, Wisconsin, in a variety of styles, from the farm types we occasionally see on the rally field, through to a range of large, industrial engines. The Ingeco ‘Farm’ type engine was introduced in around 1913 and, over the years, was produced in a range of sizes from 1½hp to 15hp. 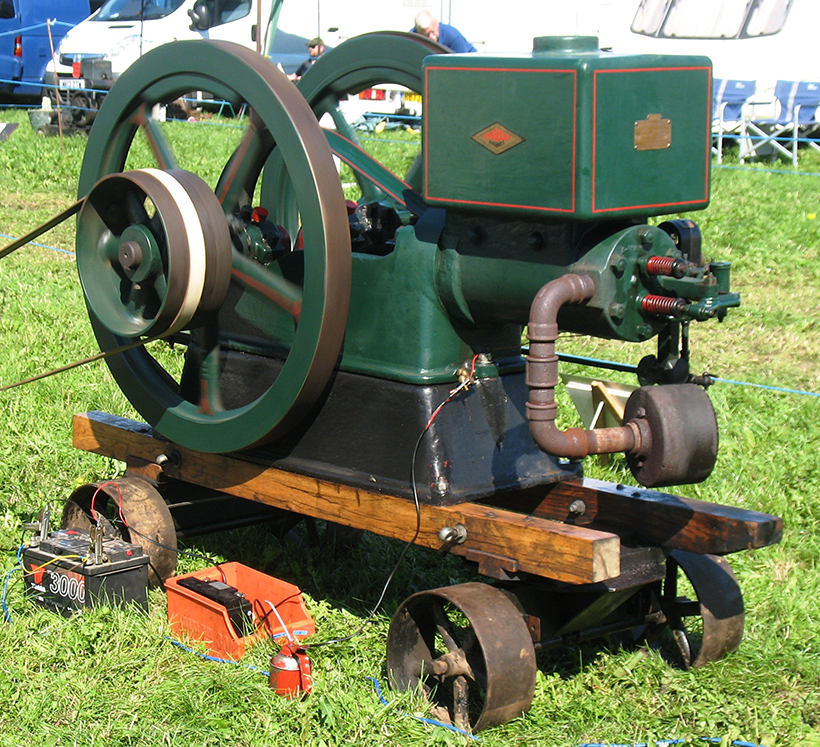 The Ingeco engine seen from the exhaust side.

Early farm engines – the type AL – employed a hit and miss-type governor, and were equipped with low-tension ignition using battery and induction coil as standard. Later, a throttle control governor was adopted as standard and low-tension magneto ignition was offered as an optional extra. The AL engine was heavily constructed, especially when compared to many of the other farm-type engines available at the time.

The International Gas Engine Company was acquired by Worthington Machine Company, also of Cudahy, Wisconsin; one source suggests that this happened in 1914, while another puts it at 1917. For a short period after the take-over, production of farm-type engines continued as before; even the ‘INGECO’ logo was retained.

Later, the W-type engine was introduced; while it retained the old engine appearance for a short period, it was of a much lighter construction. Low-tension Sumpter magneto ignition was fitted as standard equipment. By 1921, the Sumpter Wizard magneto had been replaced by a Webster Tri-Polar magneto. 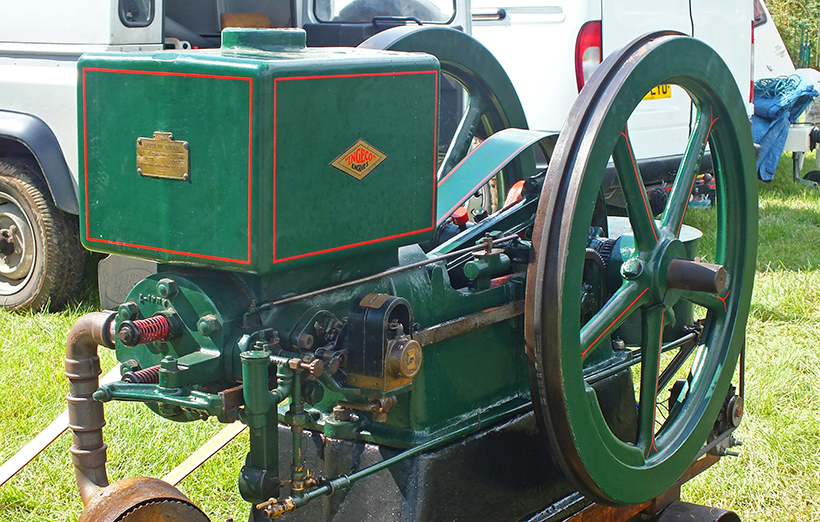 Another view of Bernie Moore’s engine.

Ingeco engines were marketed in the UK by Worthington-Simpson Ltd of Queen’s House, Kingsway, London WC2. It is possible that some W-type engines could be badged as both ‘Ingeco’ or ‘Worthington’.

I’m not aware of any Ingeco industrial-type engines – which were produced in horizontal and vertical forms – that have been imported into the UK. A letter from Worthington-Simpson Ltd dated February 1975 states that the last engine was sold in 1934. It doesn’t, however, indicate if that engine was a farm-type engine or an industrial engine.

One ‘larger than average’ Ingeco engine is the 8hp model that resides at the Anson Engine Museum at Poynton, in Cheshire. It was purchased secondhand by the late Les Cawley, back in 1942, and was used by him commercially for many years to drive a saw-bench and generator. Even now, after some 20 years, if I close my eyes I can see Les leaning against the Ingeco, a broad smile on his face, as he related fond memories of the old engine to those willing to listen.

One of his favourite stories was how the engine not only helped him earn his wages by driving a saw-bench but how, on a cold winter’s day, it would provide him with a hot lunch; he would place a couple of eggs in a cloth and suspend them in the water for a few minutes! 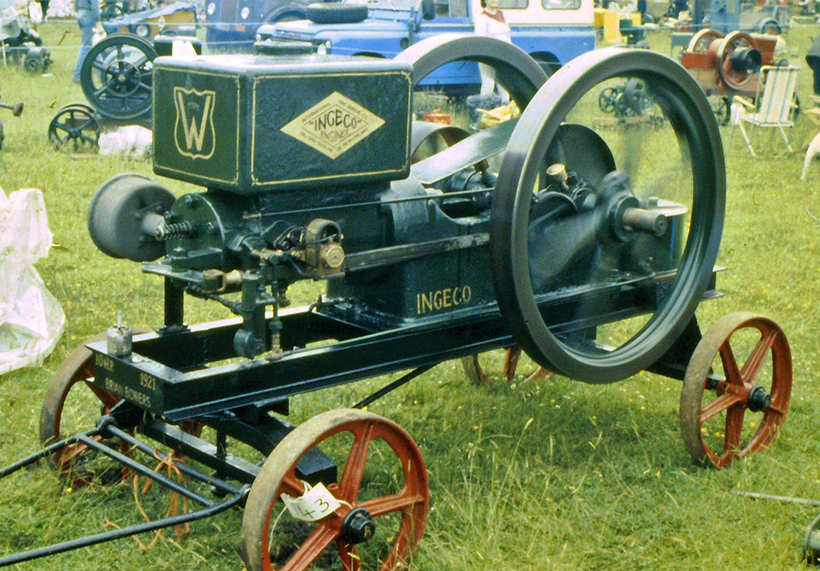 The largest Ingeco engine I’ve seen was a 10hp model exhibited by Brian Bowers, at one of the early 1000 Engine Rallies, when they were held at Tatton Park.

This feature comes from a recent issue of Stationary Engine, and you can get a money-saving subscription to the magazine simply by clicking HERE 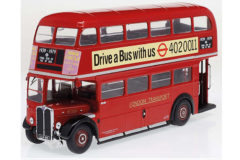 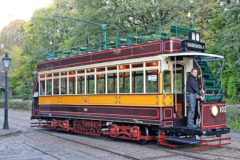