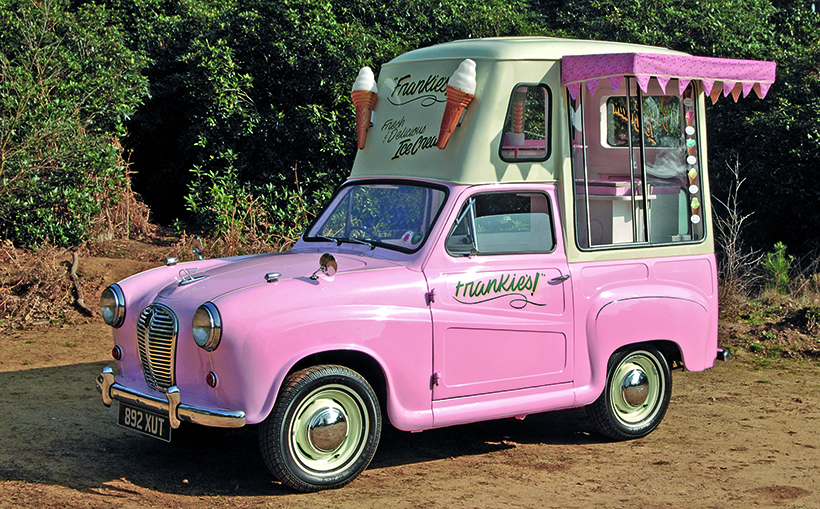 Richard Dracup’s superb creation; an ice cream van based on an Austin A30 Countryman.

This story starts back in 2019 at the Austin A30/A35 Owners Club National Rally held at Winchester, when the proposal to build an Austin A35 ice cream van was put to Andy Pitcher and his brother Martin by Richard Dracup, in the presence of wife Tracy, who indicated that Richard was not to purchase another vehicle! It seemed to be a non-starter until Andy offered up ‘Kenny’ as the project vehicle, thus paving the way for Richard as he was not actually buying another vehicle. ‘Kenny’ was in fact a 1956 Austin A30 Countryman (AP4).

This was a three-way venture with Andy, Martin and Richard and it was agreed that the ice cream van would be built as a fully functional working van! Prior to suggesting the idea, Richard had established that one such vehicle had been converted, based on an Austin A35 van and built by Whitby Morrison. 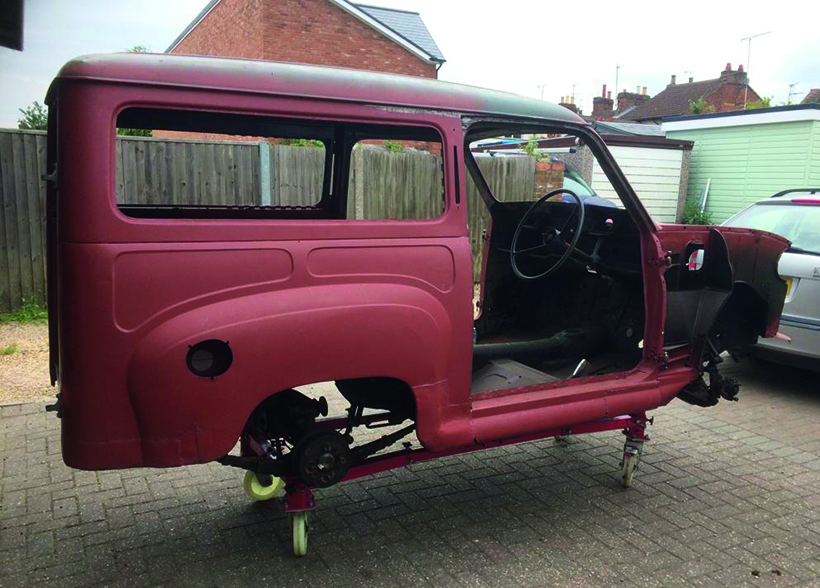 Base A30 Countryman after blasting and priming. A lot of restoration was needed. (Pic: Richard Dracup)

Andy contacted the company to seek permission for the conversion. This was necessary as for entirely understandable reasons Whitby Morrison are keen to protect their intellectual property rights and take a very dim view of anyone who copies their designs! In this case, however, permission was granted, with the proviso that the ‘new’ ice cream van was not a direct copy of their original.

The project was soon in motion, with Richard and son Justin collecting ‘Kenny’ as a rolling shell. Richard had devised a plan of action for the transformation which began with fabrication of the roof supports and framework, which were welded in. The next stage was to cut out the roof panel and determine the height, this had to be slightly lower than his workshop door for obvious reasons! The next couple of months were spent cutting steel, welding and making panels after the roof and sides were finished. 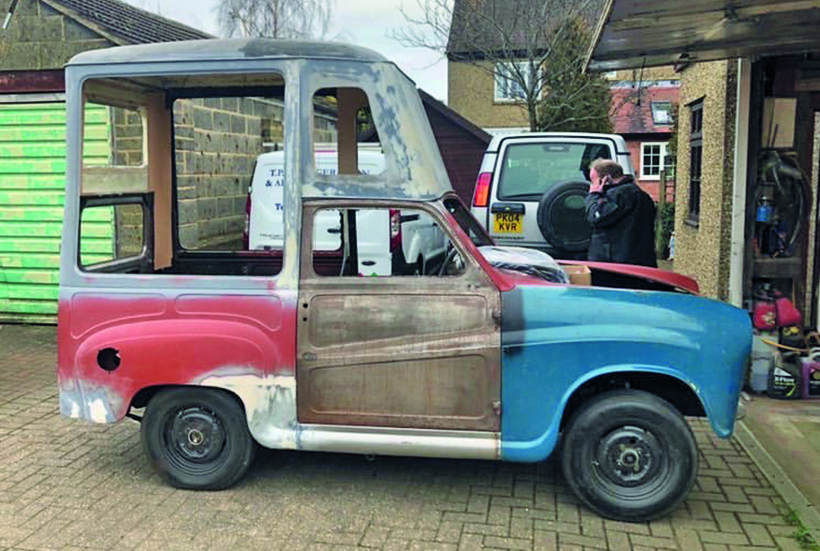 Richard then worked out what size freezer was needed and how to install it. This involved fabricating steelwork around the rear floor and spare wheel. The freezer lid and top frame were hand-made, the glassfibre lid having been bought a few years previously. Next the inner skin was fabricated with insulation and a new door seal made. I should perhaps mention at this point that Richard is a refrigeration engineer by trade…

The base vehicle was also in need of very extensive restoration to the usual A35 weak spots, with new floor panels as well as inner and outer sills. As part of all this, the wings and doors were fitted to check body alignment along with the door gaps. 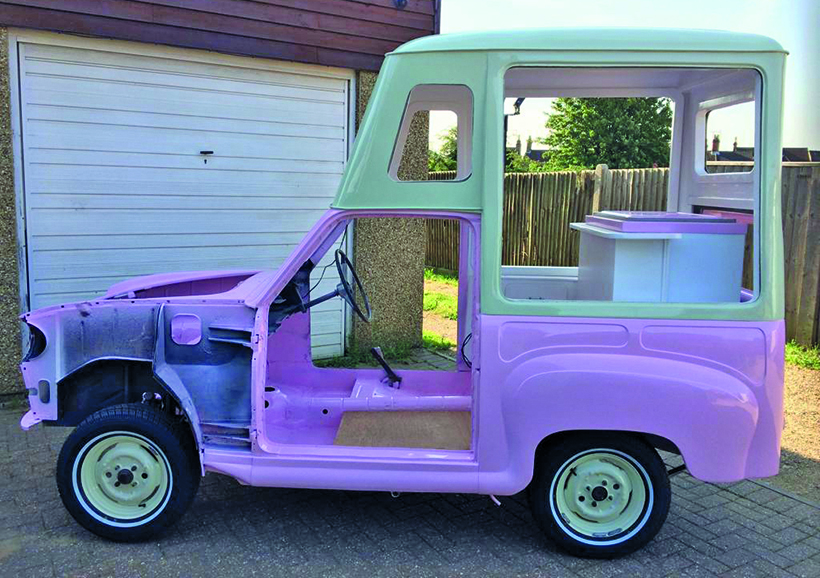 Back from the paintshop, and very pink! (Pic: Justin Dracup)

The vehicle was finally starting to come together and was taking shape nicely. Besides working on the van, Richard spent many nights online searching and sourcing ice cream van parts from the 1950s and 1960s. eBay produced many such items, but he was also lucky enough to have friends in the ice cream trade who were willing to part with some items.

The interior was planned utilising maximum-efficiency to satisfy current food hygiene and safety standards. A wooden frame was needed for the ceiling, sides and window frames, plus a panel around the freezer box and sink unit. For this part of the build Andy Finney who was highly skilled in carpentry was drafted in to assist, as well as an A35 club owner he is also a narrowboat builder. 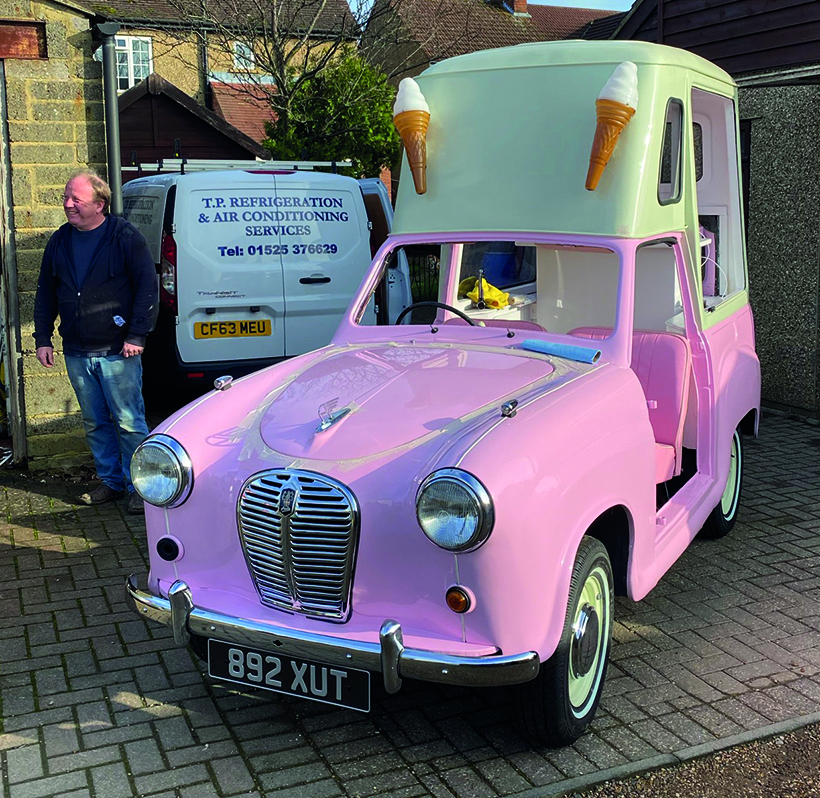 Richard decided to trailer the van to Andy’s unit to carry out the work. Andy was cutting and making the window frames and steam forming plywood lining all-round the inside. Once Andy had finished it was trailered back to Richard’s, where he installed the wiring for the lights etc. plus main power fuse board with red trips.

Next the A30 was trailered again; this time to the Howard Brothers paint shop. Strict instructions were issued on the colour scheme; it had to be candy pink and cream. While the van was away at the paintshop Richard had time to work out how to make the window glass. It had to be 6mm thick, but being just under a metre high, conventional glass would be too heavy. Accordingly, PVC sheets were ordered and Richard tells me he has now perfected the art of cutting PVC sheets! The rubber trim/seals for around the windows came from Woollies of Market Deeping who were very helpful and even managed to obtain all the different ones required. Martin, meanwhile, stripped and rebuilt the engine and checked, cleaned and painted all the running gear which was boxed up with new nuts bolts and fittings to make the final build easier. 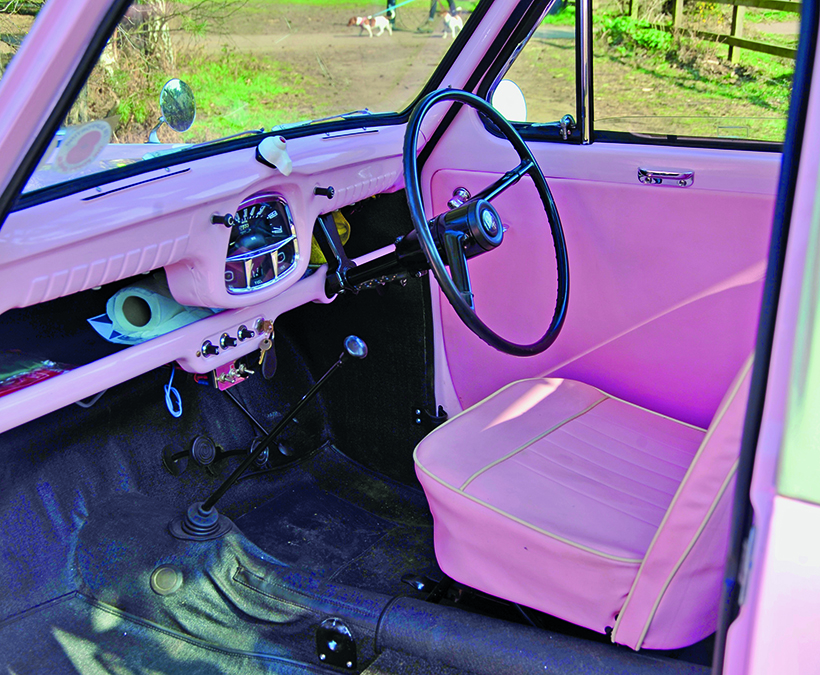 The pinkness extends to the cab interior trim…

It was time to collect the van from the painters, Richard tells me it looked amazing but it sure was very pink. Dark grey was the chosen colour for the underneath and that was the next job to tackle

Seeing COVID-19 lockdown restrictions being lifted thus enabling Andy and Martin to get to work fitting all the running gear and the newly chromed bright work. Richard sought the services of upholsterer Pete Norbury to re-cover the seats in pink, Richard explained what shade of pink was required and he come up trumps. Non-slip flooring for the rear was supplied by a friend. Richard informs me of a conversation with Nikki Field during lock-down. She kindly sourced the ice cream patterned material for the aprons and hats. She also made the cover for the sunshade and bunting.  He says ‘We are so lucky to have a friend with these skills within our club’. 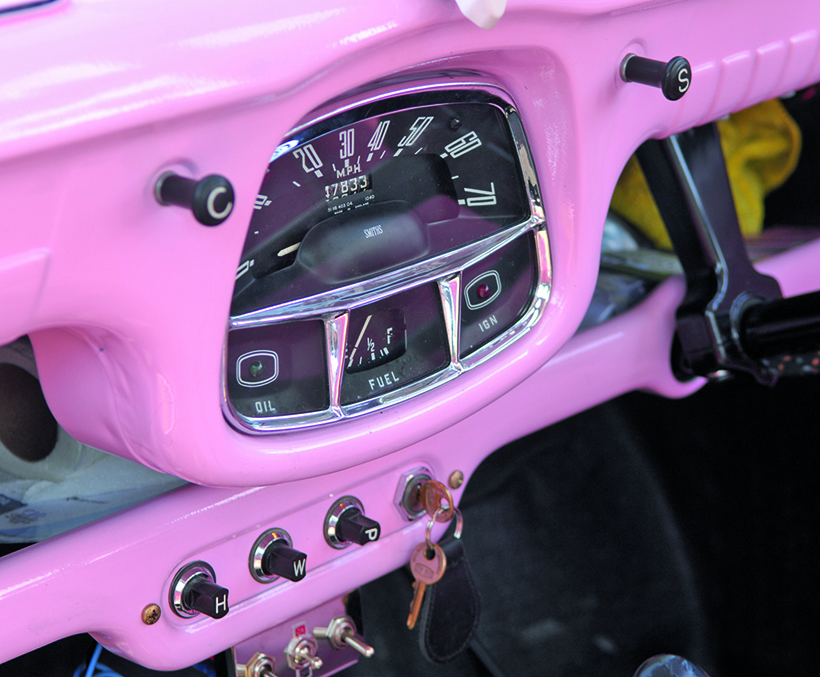 …and even the dash. S (for starter) pull-knob operates directly on a full-power starter switch; there’s no remote solenoid on A30s and A35s.

With the van painted and finished it just needed some lettering and it was by pure chance whilst at a local vehicle show it was mentioned that Richard was on the look-out for a sign=writer, they were given a number. Upon contact Jorge Jacobs of ‘Signs by Jorge’ explained that her one dream was to sign-write an ice cream van and include it in her portfolio. So in came Jorge and she set to work for three days, brushes in hand and what a job, both Richard and Tracy were happy with the finish.

So why Frankie, I hear you ask, something I asked them too. The answer was simple, after much consideration they could not think of what to call the van, when Tracy suggested Frankie’s after their latest grandchild. So Frankie is now up and running, ready to attend events and start on a new commercial venture. 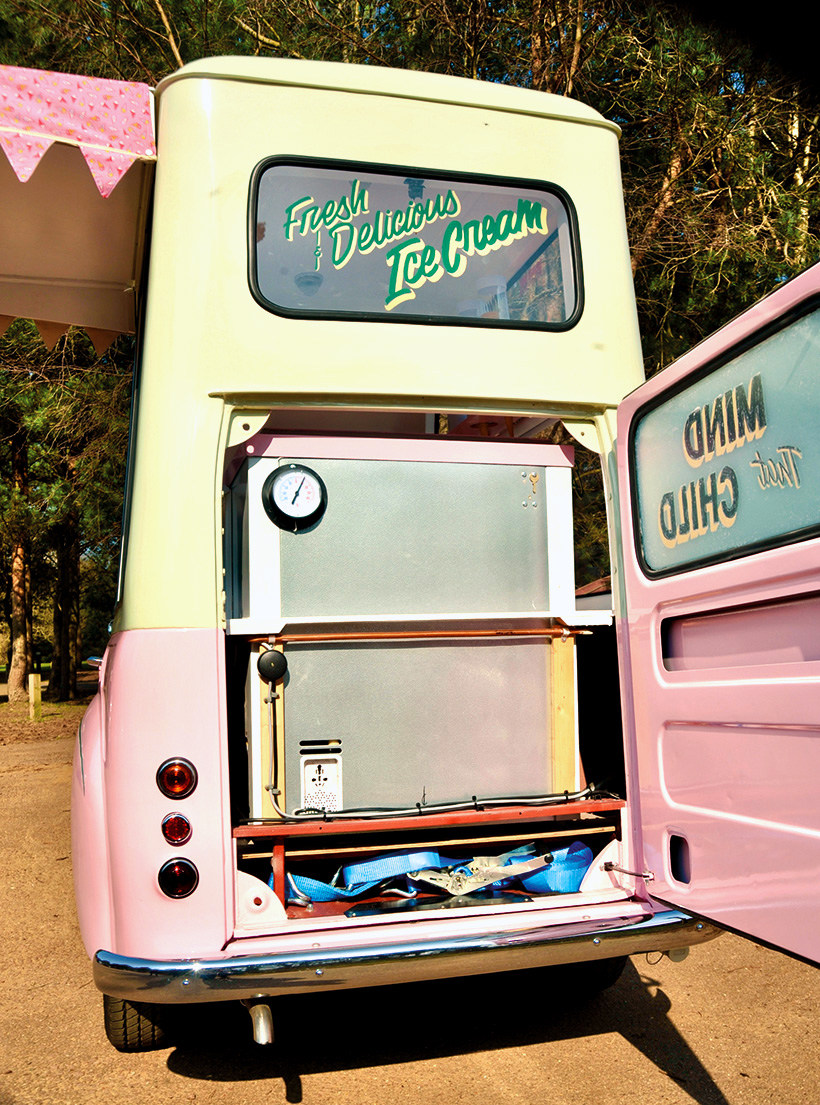 Access to the freezer unit is via the standard single opening rear door.

Sincere thanks requested to recorded by Richard to both Andy and Martin Pitcher for completing this project, oh I nearly forgot to mention a very understanding wife Tracy for putting up with him. I need to record my thanks to Austin A30/35 Owners club www.austina30a35ownersclub.co.uk plus both Tracy & Richard Dracup for all their assistance with the compilation of this article and allowing me access to this unique vehicle. 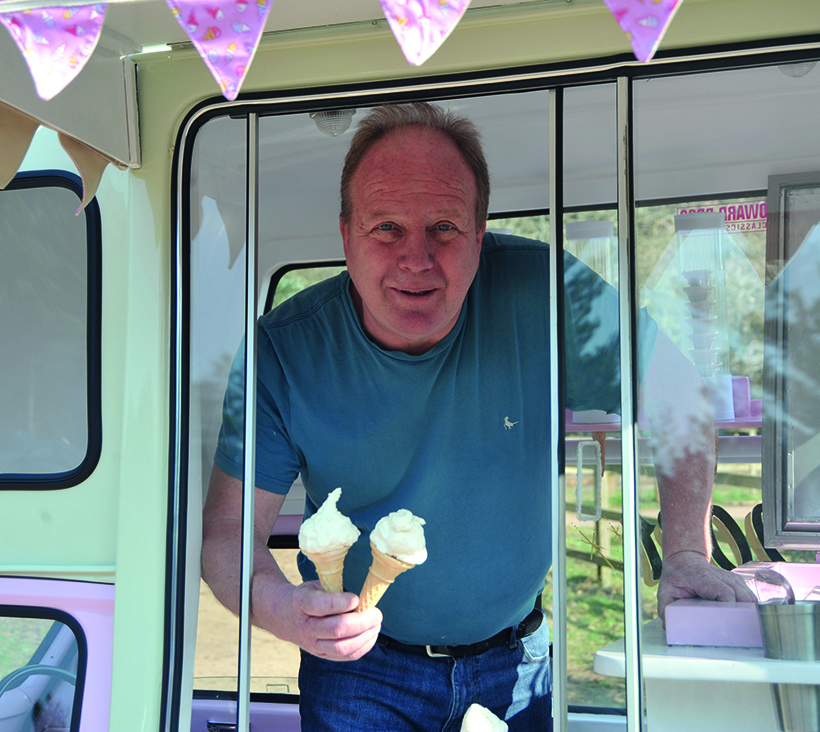 A cool-looking van in every sense!

This feature comes from the latest issue of Classic & Vintage Commercials, and you can get a money-saving subscription simply by clicking HERE 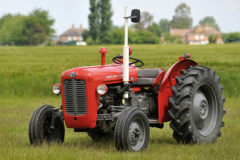 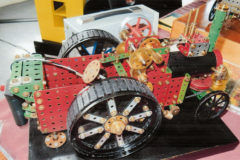