Mike Neale tells the story of an incredibly original, 1957 Morris J2 Minibus which is certainly a rare survivor today. 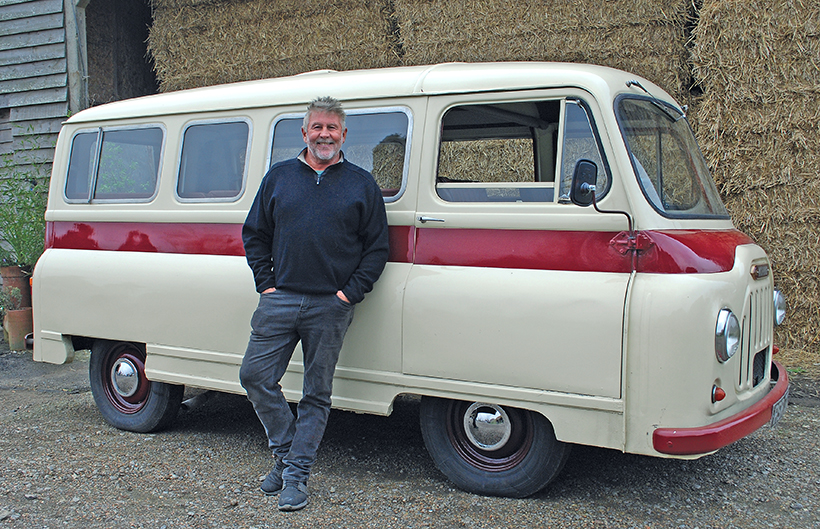 1957 Morris J2 Minibus owner Tony Partridge with his vehicle, which now lives on the south coast and at the opposite end of the British Isles to the Scottish Highlands where it spent its first 60 years.

In June 1956, the British Motor Corporation introduced a new 15cwt forward control van range, initially sold as the Morris J2 or Austin 152 Omnivan, with a different front panel fitted to each. The Morris versions had a taller, pear-shaped grille with vertical bars, while the Austins had a lower, wider grille with horizontal bars. From 1965, however, the latter style was standardised across both Austin and Morris versions.

BMC was apparently inspired by the design of the German Ford FK1000 van that had been introduced in 1953, buying one for evaluation and testing during the development of the J2. There is a slight passing resemblance between the two vans, particularly the single, side-hinged rear door, the same 7ft 6in (2.28m) wheelbase, ribbed floor panels and general construction principles. 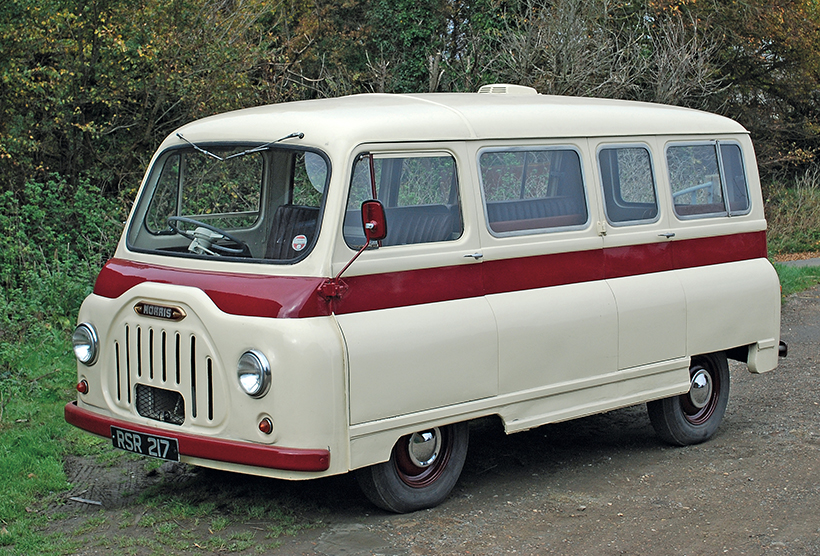 The all-steel, chassis-less monocoque body of the J2, with a single-piece curved windscreen, was something of an innovation compared to the previous Morris J Type van. Body panels were pressed and partially assembled at the Nuffield Metal Products factory at the Common Lane side of the Ward End Works in Birmingham, then sent down the road to Adderley Park for final assembly.

All vehicles were spray-painted in grey primer (not dipped), with any finished colour (primer was the factory-standard finish) being sprayed after leaving the main assembly area. Rust-proofing was something of an issue, however, with the inside of any closed box sections being unprotected and, sadly, the J2 had a tendency to rust from the spot-welded seams, resulting in a very low survival rate today. Innovative, the design may have been.  Durable it was not. 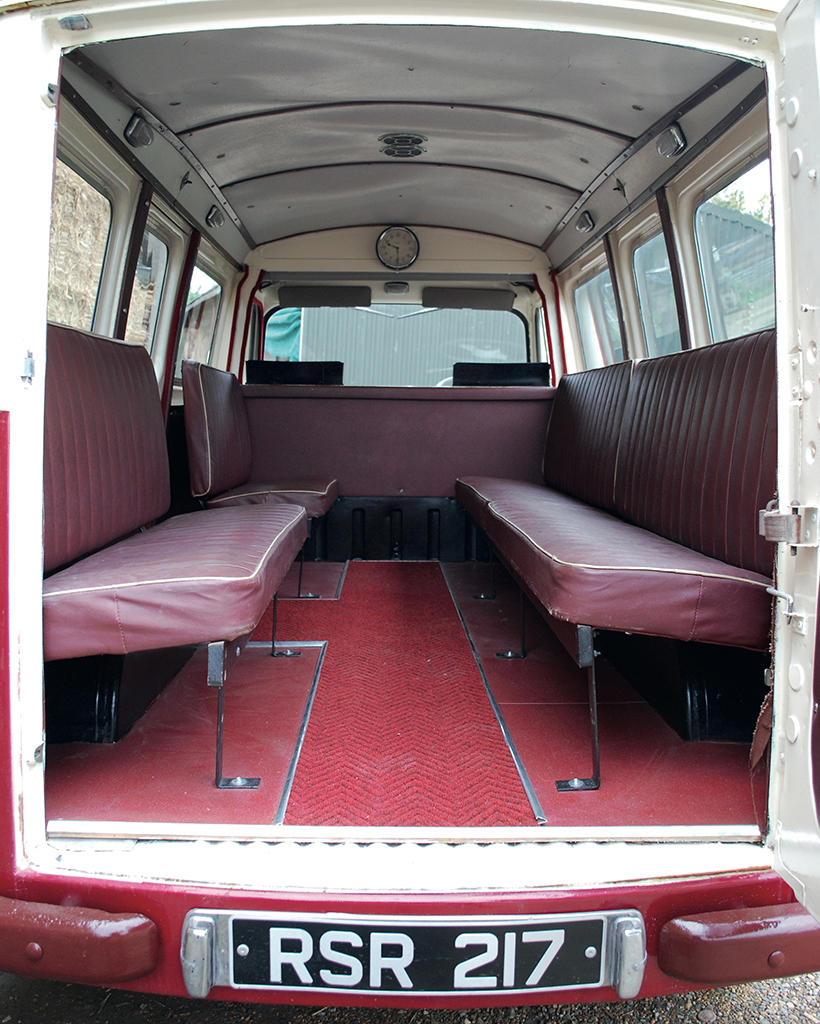 Vans, pick-ups and minibuses were available from the factory, while various coachbuilders produced motorhome variants, high-roof conversions and ambulances. Vans could have either hinged or sliding cab doors, while minibuses generally had hinged cab doors plus an additional side entrance door on the nearside (the left side on RHD vehicles, and the right side on LHD versions).

Minibuses had either 10 forward facing seats, including the driver, or 13 seats if longitudinal, rear benches were fitted. A central roof ventilator provided fresh air into the minibus, even with the windows closed. In 1959, a 12-seater (inc. driver) PSV version was introduced, with a few modifications required by legislation, such as a relocated fuel tank and filler, petrol shut-off device, grab handles and fold-down step on the side passenger door, among other things. 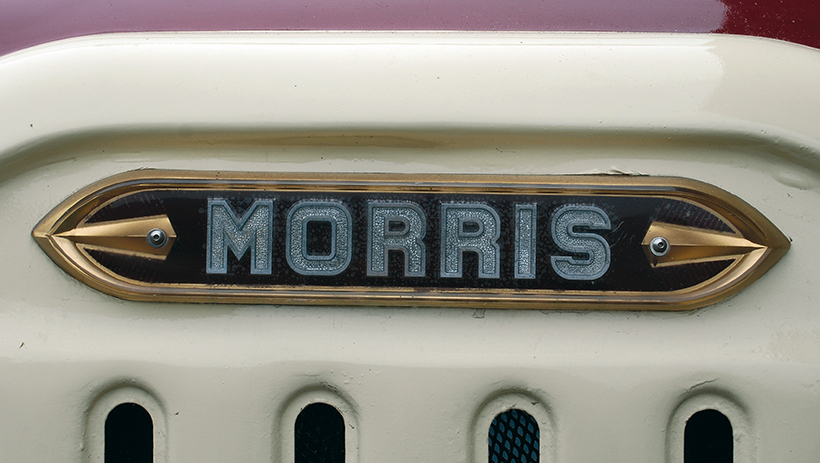 Fifteen-inch wheels were fitted to the J2. The front track was 4ft 2 9/16 in while, at the rear, it was 4ft 5in. The overall body width was 6ft 1¾ in, so the wheels did look quite recessed under the body, accentuated by the low wheelarch cut-outs. The turning circle was 37ft. Semi-elliptical leaf spring suspension was fitted to both front and rear, with telescopic hydraulic shock absorbers at the front and lever-type hydraulic shock absorbers at the rear.

The engine was the 1,489cc, four-cylinder B Series petrol unit, mounted behind the front axle and between the front seats. The 0-60mph time was, err, not available as the top speed was around 50mph… An (even slower) 1,489cc diesel was offered as an option, from June 1960. 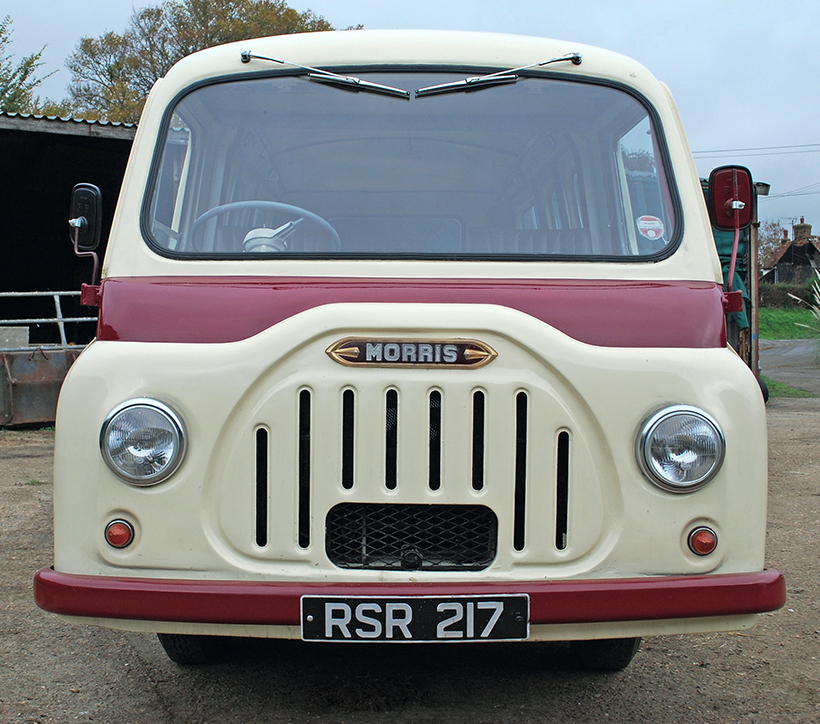 The narrow track is especially noticeable from the front. Unusually, this rural Scottish registration is original and not an age-related replacement for one that’s been sold.

The gearbox was initially a four-speed synchromesh column change unique to the J2, though the floor change ‘box from the J4 van was introduced in 1961 (the gear pattern the ‘wrong way round’ to start with, with higher gears to the left of lower gears though, from 1965, it changed to a conventional configuration. A Borg-Warner automatic option was offered from 1963.

Later in 1963, the petrol engine was upgraded to the 1,622cc version of the B series, providing slightly peppier performance (it’s all relative, though). 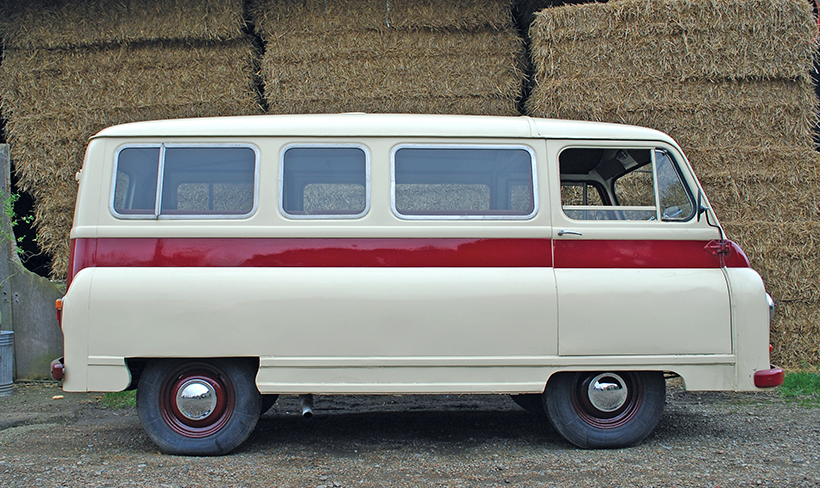 Cream and maroon weren’t the original colours, but were applied when the J2 was set to be used for sightseeing tours in Wales. The new livery looks right for the era though.

Production ended in 1967, the replacement being the underfloor-engined 250JU, which from the rear looked like a J2 with wider track and an extended front. 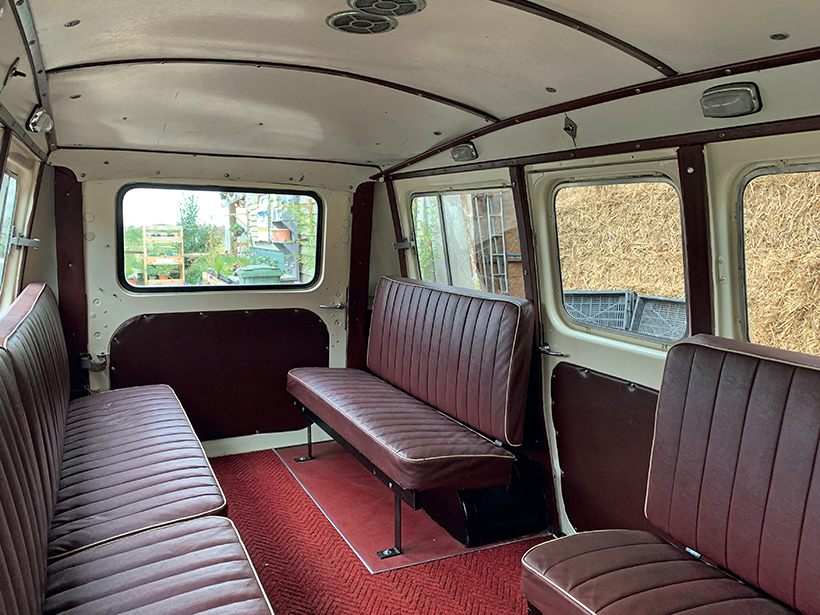 Interior. This Minibus certainly appears to have been used carefully – and sparingly.

Scotland to Sussex
This 1957 13-seater Morris J2 Minibus is owned by Tony Partridge from East Sussex, and he’s only the vehicle’s fourth owner. It was supplied new to a Mr Jas G Lamb of Montrose, in Scotland, (hence the Angus ‘RSR’ registration) by Duthie & Son Ltd of Montrose. Their dealer plaque is still fixed to the dashboard. While I was talking to Tony about this, we began to wonder what might have happened to the company. There was only one way to find out and a quick internet search yielded a phone number, so Tony rang it. The call went like this:

“Hello, Duthies of Montrose.”  A promising start – they still exist!

Tony: “Hello, I wonder if you can help. I bought a new Morris J2 from you in 1957 and the battery has worn out. I wondered if it was still covered under warranty?”

Tony: “Seriously though, I have recently bought a Morris J2 which you originally supplied and I’m trying to find out a bit more of the history of the vehicle and of Duthies.”

Duthies: “I think that would have been the previous owners, but I’ll pass you on to my colleague Lorna who might know more.” 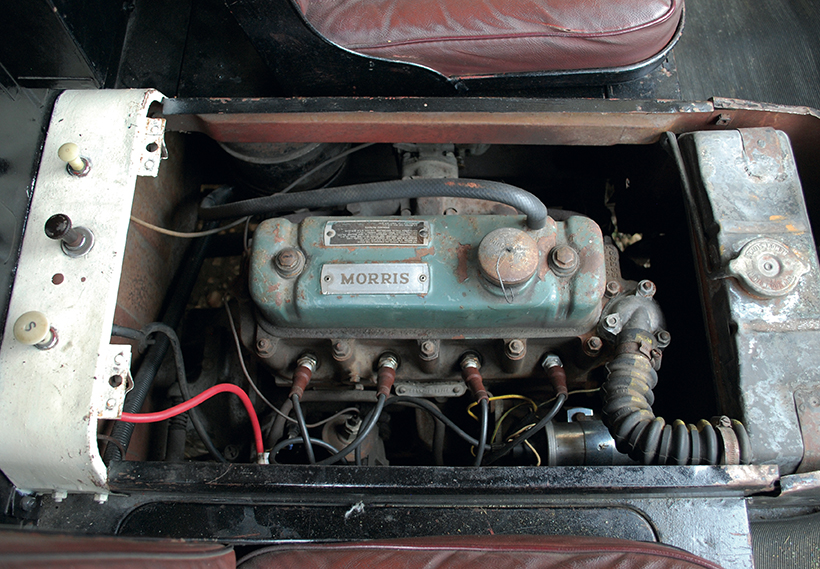 The 1,489cc B-Series petrol engine is the Morris’ original. Capacity was increased to 1,622 in 1963, and there was also a diesel-engined version.

Lorna: “Hello.  We do have a book that records all the vehicles that we have supplied.  I’ll just go and look for it.”

Literally 20 seconds later, Lorna returned to the phone with the book.

Lorna: “What is the registration number?”

Lorna: “Yes, that’s a Morris Commercial J2 13-seater, sold to a James Lamb of Montrose on July 23rd, 1957, in green and cream. I have the chassis and engine numbers here.” 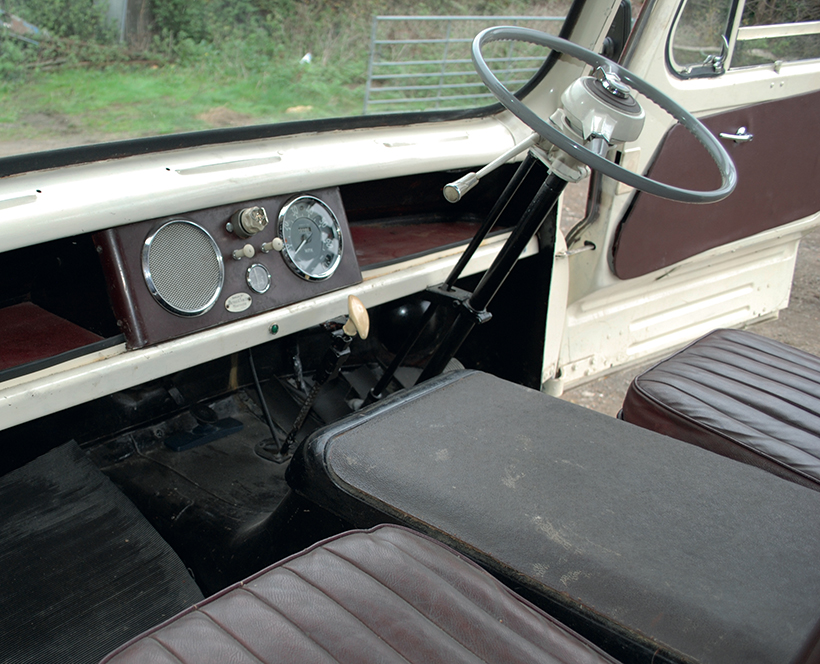 The cab area features a simple dashboard, typical for the time. It’s centrally-mounted to make RHD and LHD versions easy to build alongside each other.

I was amazed. Not only do the original dealers still exist, albeit now selling SsangYong, Citroen and secondhand cars, but they still have the original records of a sale made some 65 years ago right in front of them, in a book. You don’t get that on Google!

Straight away we went and lifted the engine cover and, sure enough, the number of the 1,489cc petrol engine matched the one fitted when the J2 was originally supplied, confirming this as a proper ‘matching numbers’ vehicle. 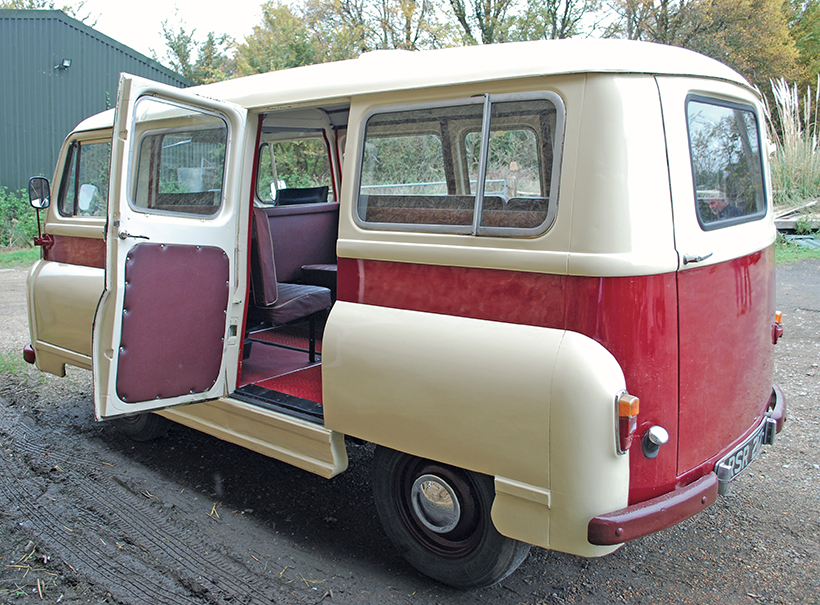 From the details that Tony got when he bought the Morris, it seems that the first owner kept it until as recently as 2018. The original service manual confirms that Duthies carried out its first free service on July 26th, 1957, at 506 miles.

In 2018 it was bought by someone in Wales who restored it and repainted it in the current cream and maroon colour scheme, intending to use it for sightseeing tours. Sadly, he became ill, so this never went ahead and the Morris was sold again. 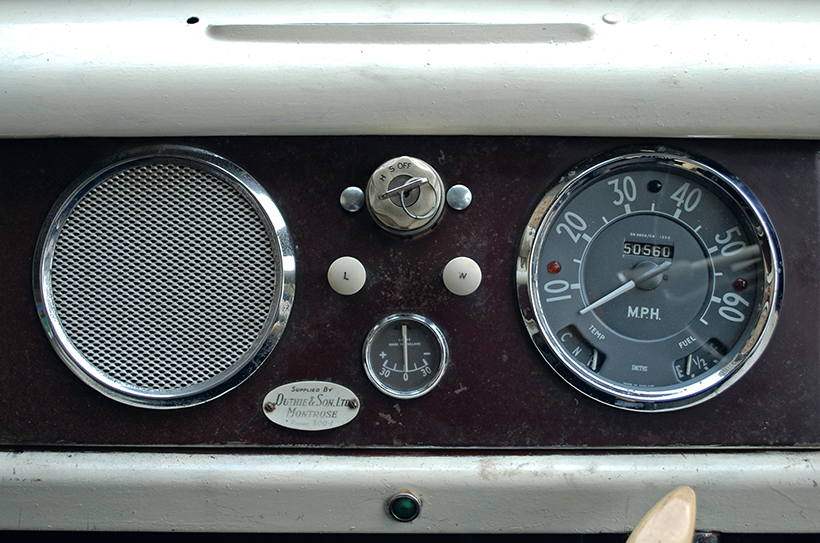 The recorded mileage total of 50,560 is believed to be genuine.

It was bought by a friend of Tony’s who supplies cars for films. It’s likely to appear in a period drama TV series due out later this year. After filming had finished, Tony heard about the minibus and went to have a look at it. “I wasn’t particularly looking for a vehicle like this, but I loved its originality, so I bought it,” explains Tony. “Someone actually approached me wanting to buy it, but they wanted to turn it into a camper, and it’s just too original to do that. I’m going to keep it and may put it into a few films myself.” 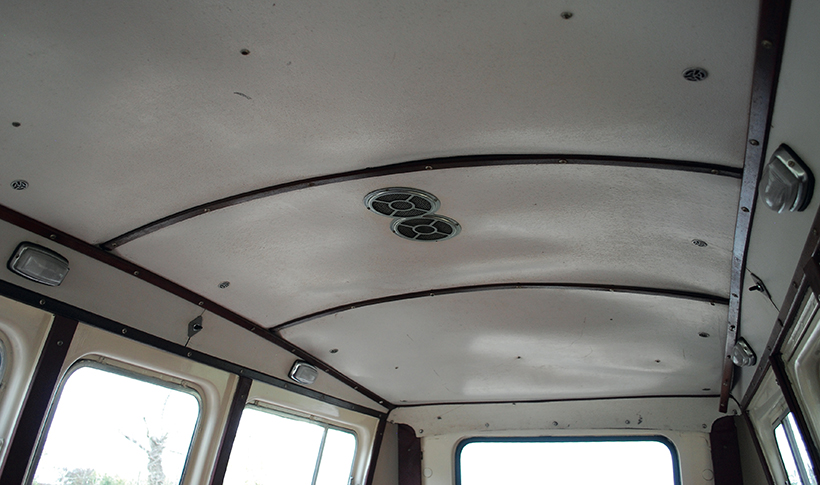 Roof vents bring in fresh air, even with the windows closed.

The odometer reads 50,560 miles, which Tony thinks is correct. The seats, doorcards and roll-down blind between the cab and passenger compartment are hardly worn. “It doesn’t clunk or bang, but just keeps chugging along. It doesn’t leak any oil,” notes Tony. Is this a record for a 65-year-old British vehicle? It seems that the original owner was very careful and used it quite sparingly. Was it for his business, for local community use, or as a family car for a large family? If anyone knows any more of the history, Tony would be keen to hear about it. 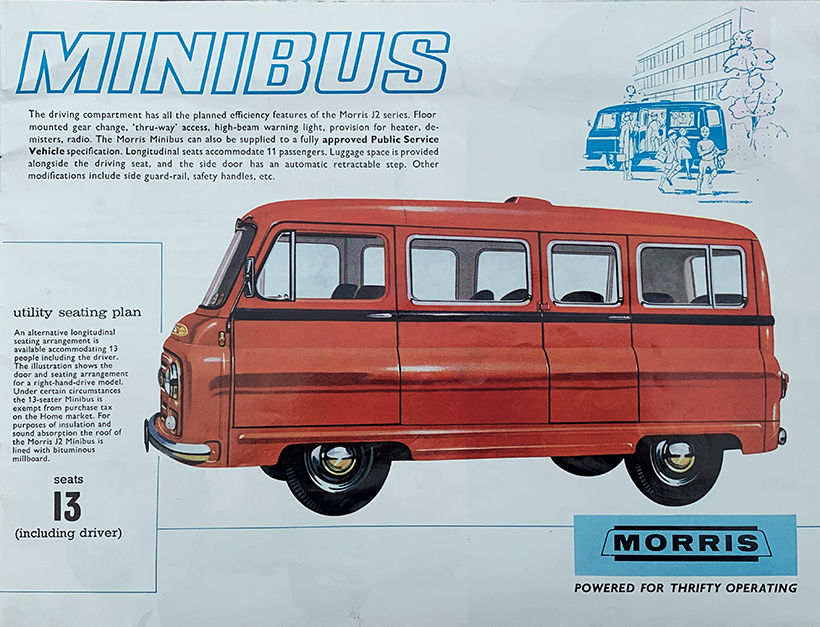 The Morris J2 Minibus brochure; this was a fully factory-built model.

“The brakes were renewed by the chap in Wales, and work well. They are drums all round but it stops on a ninepence,” Tony tells me. “It has a three-on-the-tree gearbox, rather than the usual four-speed, for some reason.  First is a bit of a pain to engage, but you don’t often need that and second and third are fine. I’ve not had to do any work to it since I bought it. It starts first time, every time, even after a few weeks. I do about 40mph in it.”

Tony has owned dozens of classic cars over the years, and his collection currently includes a Triumph Spitfire and a Standard Nine, as well as Citroen 2CV Charleston and Morris 1300GT restoration projects. This is, however, his first classic van. 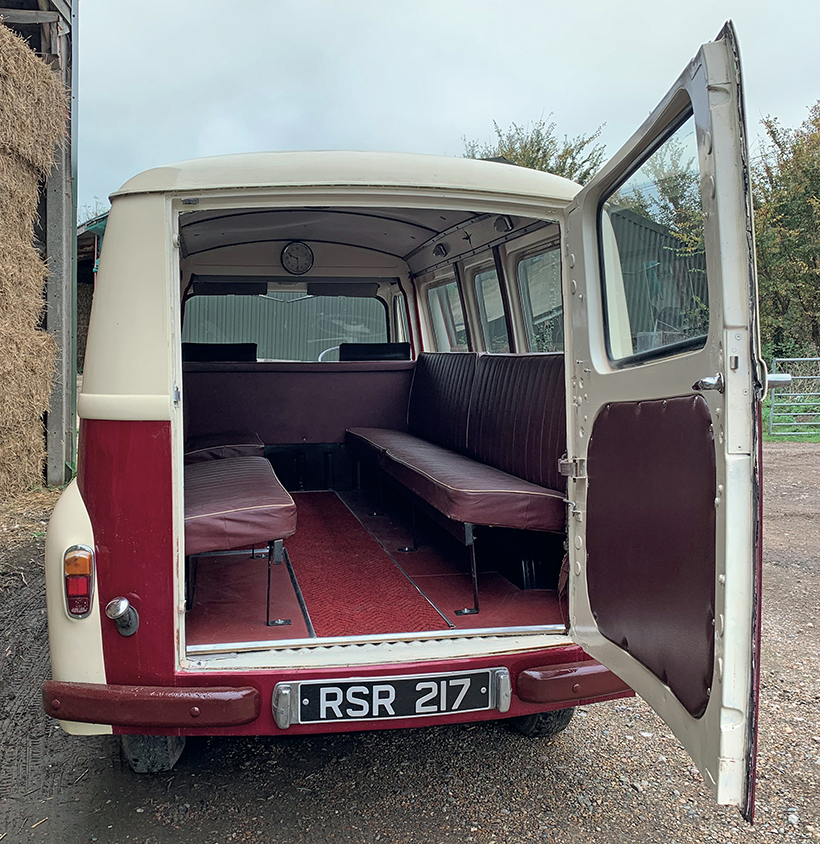 There can’t be many surviving Morris J2 minibuses, so if you see one in a new film or TV series, it’ll probably be this one.

Thanks to Tony Partridge and to Lorna at Duthies of Montrose for their input on this article.

This feature is taken from the latest issue of Classic & Vintage Commercials magazine. For a money-saving subscription simply click HERE 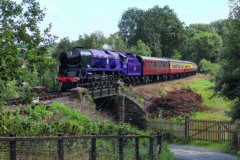 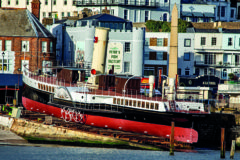