The 1970s Leyland Clydesdale tipper was one of the last, British-built workhorses of that era. Bob Weir enjoys Allan Steel’s superb example. 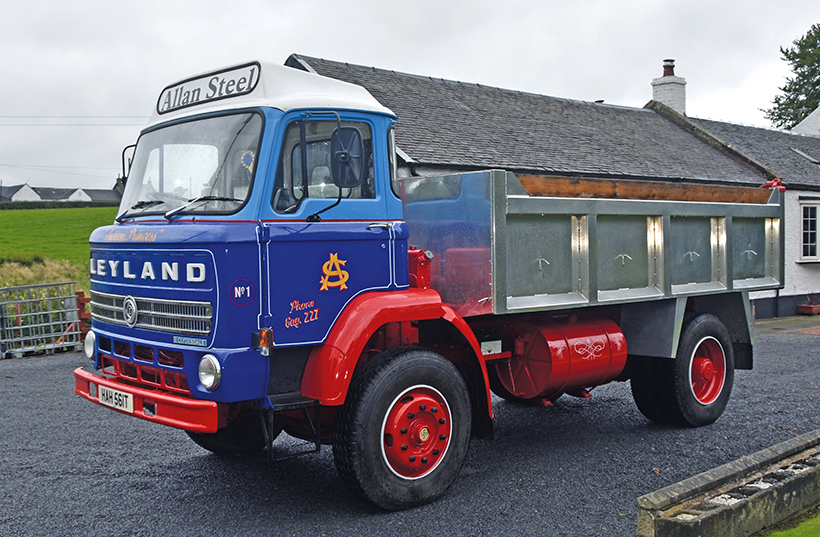 East Kilbride was a rural backwater back in the 1930s, with a population of less than 1,000. The Clyde Valley Regional Plan then selected the village as the first of five Scottish ‘new towns’, created to take the overspill from over-crowded cities like Glasgow. In 1946, building contractors poured into the farming community, and the village was transformed beyond all recognition. The population rapidly expanded, and currently stands at around 70,000 people.

Lorry driver Allan Steel has lived in the area all his life. “My wife Isobel’s father was the boss of the local development corporation, so we saw a lot of the changes at first hand,” he explained. “Most of the land was bought from local farms. The town has grown steadily over the years, and is now a big employer in the area. Historically, transport has played an important role.” 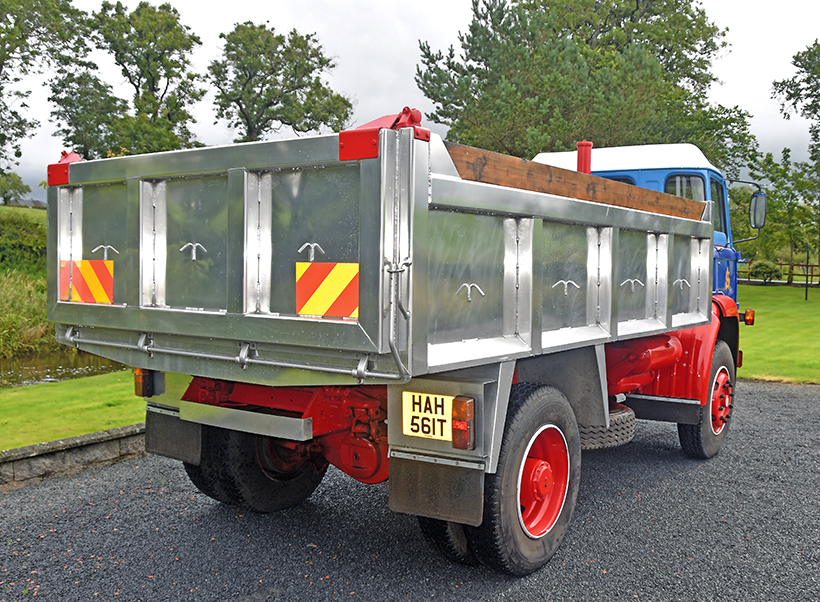 The lorry has been refurbished several times, and is in excellent condition.

Allan’s family was involved with haulage for three generations.“We have always been involved with lorries, and my grandfather owned some cattle floats,” he explained. “These were used to transport livestock to local markets. He also kept tractors and threshing mills before WW2, and one of his Albion lorries was commandeered by the government.”

“Building cattle floats was a specialist skill requiring experience. We were quite a tight community and my grandfather used a firm of coachbuilders in nearby Jackton. The Struthers family were well-known in the area, and I still see Bill Struthers from time to time.” 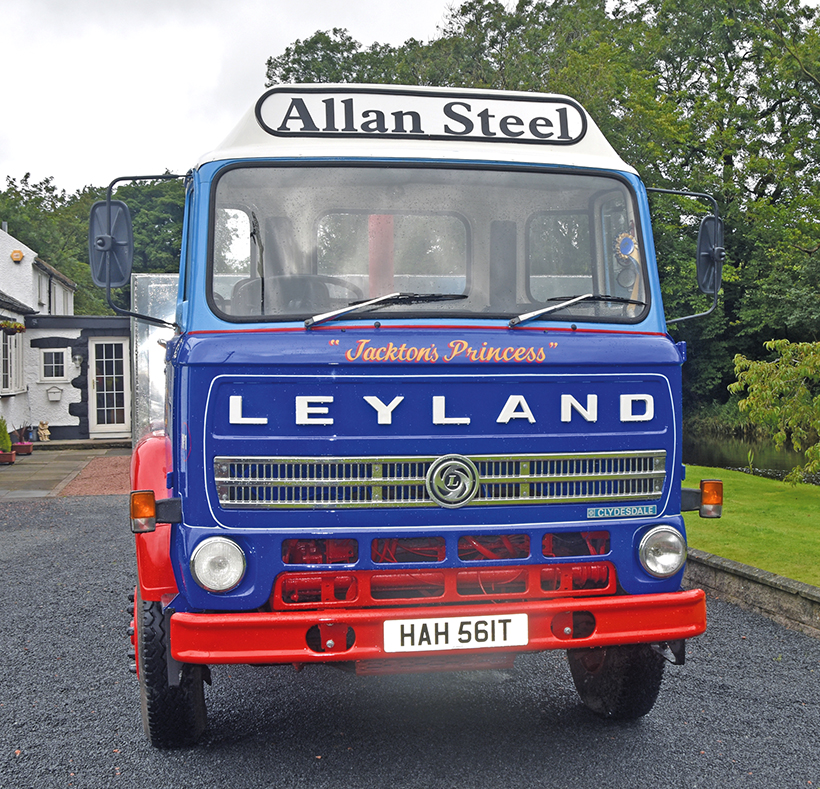 Allan’s lorry started life in England, but has spent most of its life north of the border.

Like many of his generation, Allan started hauling for the family at a young age. “It all started with small lorries like the Leyland FG and low-tonnage versions of the Bedford TK, which meant I didn’t need an HGV licence. My grandfather then sold the rest of his lorries as circumstances changed, and I started working with diggers.”

“When I turned 21, I passed my test and drove long-distance for local haulage contractors like FE Hoad & Sons based just up the road in Blantyre. The M25 was under construction at the time, and most of my work was taking loads of steel down there. I was doing three trips a week behind a 180 Gardner diesel engine. Fortunately, the lorry was fitted with a high differential, which significantly increased cruising speed. On a Sunday I could make Potters Bar in just over six hours. After dropping, I would stay overnight and drive back the next day.” 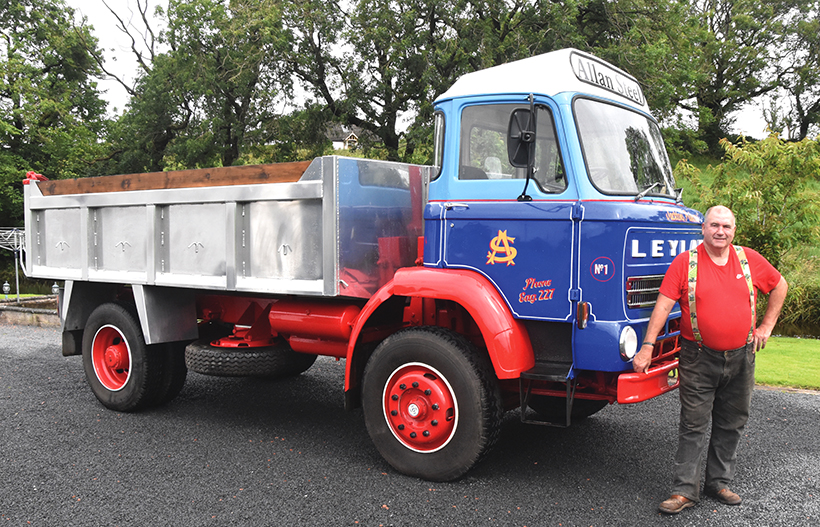 Allan Steel has been driving lorries all his working life.

Jimmy then worked for several local companies, although he noticed the types of loads were starting to change. “Demand for cattle floats was in decline. By the 1980s most farmers had 4×4 vehicles and were using them to tow small trailers. A lot of the dairy farms were also being sold off or being combined into bigger units. The cattle floats that remained were big double-deck lorries, capable of driving long distances. Although I am now semi-retired, I still do occasional work for local companies. I think it’s good to keep your hand in, and it keeps me out of mischief.”

The Clydesdale is Allan’s second classic lorry, and he has owned it for about a year. “I acquired it from collector and local contractor Gavin Bell. Gavin’s family have run a haulage business from their depot in Newhouse for many years. He told me he was attracted to the lorry because it was similar to the vehicles that were once used by his father.”Allan’s first classic lorry, a 1976 AEC Mercury, also came from the Bell family.

“I had the AEC about a year. I then decided to paint the Mercury in the traditional Steel family livery but was quoted nearly £9,000. I did not want to pay that kind of money, so Gavin suggested I swap the lorry for his Leyland Clydesdale as I would only need to paint the cab. We met at the Dingbro branch at Bellshill to get a quote for the paintwork and went from there. He took back the AEC, and I ended up with the Leyland. 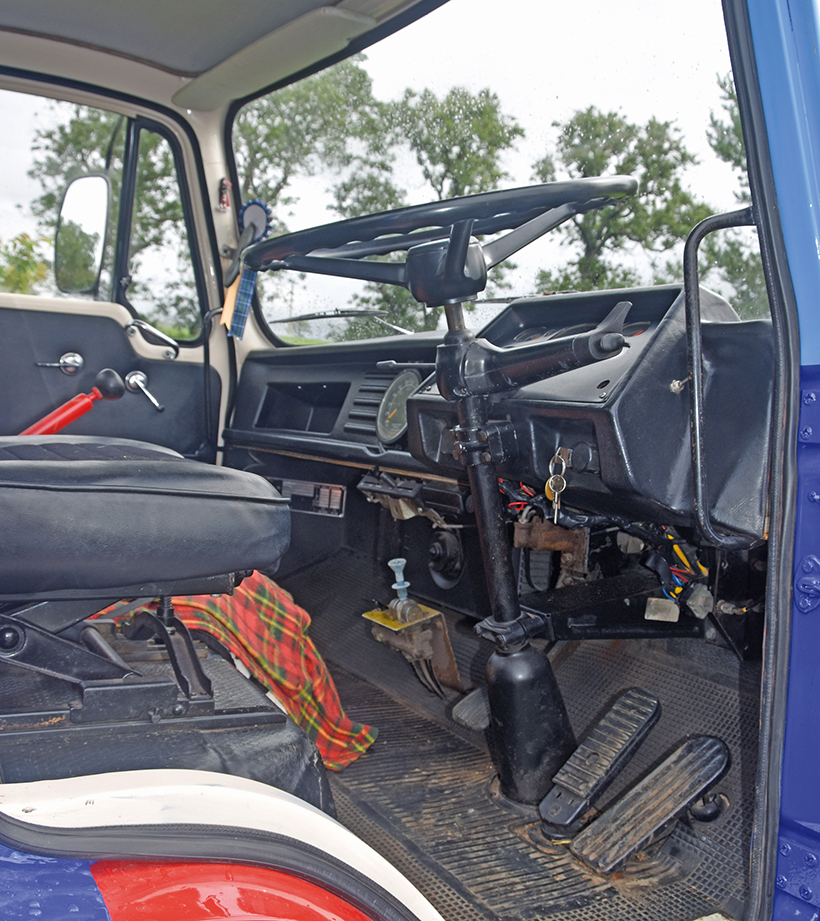 The cab is workmanlike and tidy.

“I was happy to take the Clydesdale because of the Bathgate connection, although I believe my particular lorry was one of the last to be built at Scotstoun in Glasgow. The factory at Bathgate brought a lot of well-paid employment to Scotland’s Central Belt, and most people were sorry to see it close. The lorry is the standard Clydesdale model and was previously owned by William Johnstone, a haulage firm based in Ayrshire. I believe the lorry was originally new to farming contractors Antell Brothers Ltd, from Wimborne in Dorset. Gavin was told that they used the lorry for transporting animal feed.”

Clydesdale was originally an Albion brand – even after Leyland took over in 1951. From then, the parent company had supplied a growing number of components to the Albion factory at Scotstoun. This included larger items like the engines. The Albion name, however survived until 1972, and when it happened, the demise of the Albion badge was greeted with sadness north of the border.

The Albion range of lorries was, however, kept in production and the Clydesdale, Chieftain and Reiver all survived to wear Leyland livery. Vehicle production continued at Scotstoun until 1980, before finally being transferred to BLMC’s second Scottish factory at Bathgate until it, too, closed in 1986. 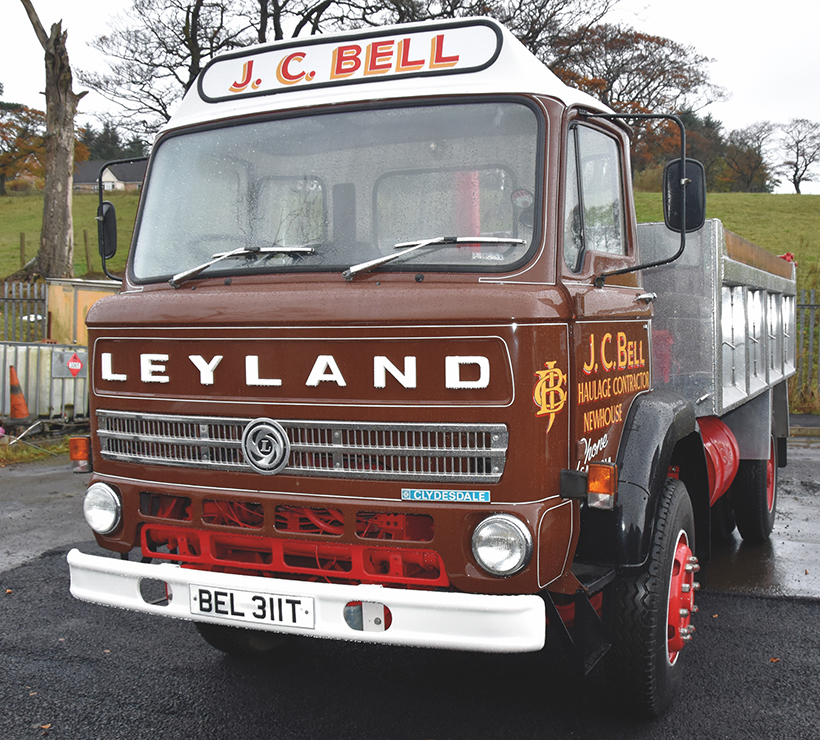 The lorry used to belong to local contractor, Gavin Bell. Allan has known the family for years.

As part of the changes the newly christened Leyland Clydesdale was equipped with the Bathgate-built G-range cab. The G-range nomenclature was relatively straightforward. For example, take Clydesdale E2CD4016N. ‘E’ stood for export models with left hand drive, ‘2’ meant a radical change in the basic design, ‘CD’ denoted model name, ’40’ for naturally-aspirated engine, ’16’ referred to GVW, and ‘N’ for normal wheelbase.

Later examples featured the Blue Line range of Family One engines, which was a joint venture between Leyland and Cummins. This engine was used to power the Clydesdale 13.5 tonnes gvw (gross vehicle weight) in rigid form and the 20.3 tonnes articulated vehicle. 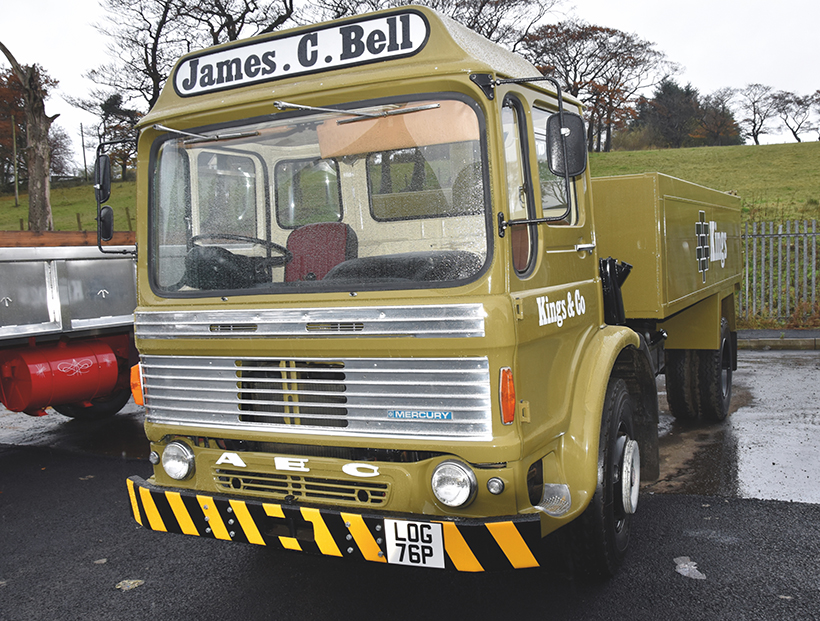 Allan never worked with the Clydesdale during the lorry’s heyday, but says they are straightforward to drive. “I can still remember using constant-mesh gearboxes, in the old days driving the Mercury and Leyland Bison,” he explained. “My grandfather used to disguise me with a hat and pipe and let me drive to Ayr and back on a Sunday when I was still only 13 years old! He always used to caution me against my father finding out. Ironically, my father used to let me do similar things around the local roads, with the warning ‘don’t let your grandfather see you!’ There was a lot less traffic back then, of course, especially at weekends. You’d never dream of trying it on now.”

“The Leyland drives like a new motor and brings back some happy memories,”  I’ve never had to do a thing to the lorry since I got it from Gavin. The Clydesdale handles well, and the gearbox is slick and straightforward. I normally take my dog ‘Blue’ with me everywhere I go, but I left her at home on this occasion because of the social distancing restrictions.”

Allan intends hanging on to the Clydesdale for the foreseeable future, but like many enthusiasts this could be subject to revision. “I suppose it’s the same with a lot of collectors,” he said. “Ideally in a perfect world, I would have preferred a rigid with a cattle float to remind me of the family’s haulage business, but the Clydesdale came along instead. That’s often the way with things.

“Of course, once you’ve gone and spent your money you then come across a lorry that really ticks all the right boxes. This happened to me quite recently when I spotted an advert for an AEC Mercury cattle float for sale. Nothing came of it, but it certainly got me thinking. Unfortunately, old cattle floats don’t come on the market that often, so the Clydesdale could be here for keeps.” 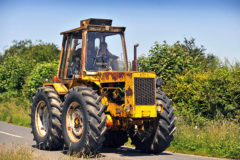 A quartet of giant, Muir-Hill tractors 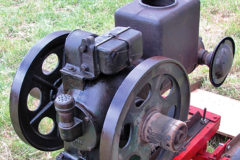