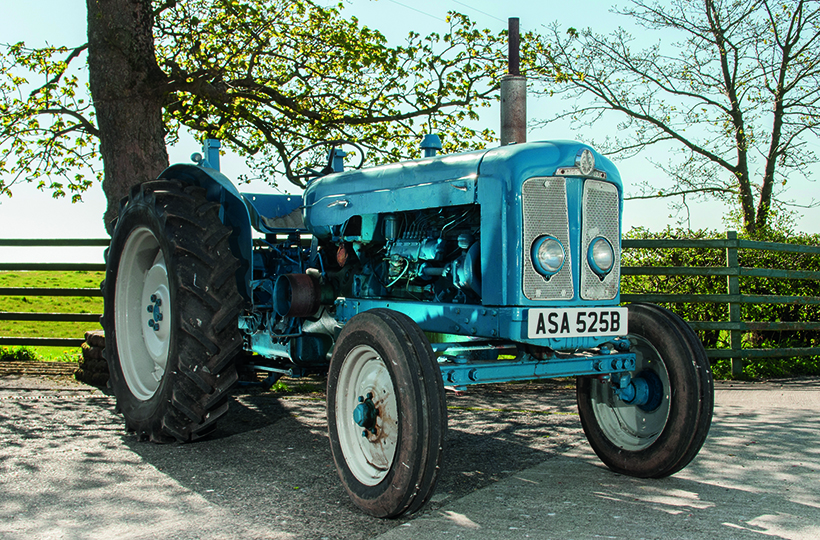 The McCaughans of Ballyversal, near Coleraine in Northern Ireland, could see the benefits of tractor power and, in 1938, they made the decision to purchase a Fordson N. It replaced Clydesdale horse power on their 62-acre farm with dairy, cereal and potato enterprises, spending the next few years on tillage and harvest operations, towing the binder and powering the belt-driven barn thresher.

This was to be the first of many purchases from the Fordson family. In 1958, a visit to TD McFarland, of Church Street in Coleraine, resulted in the purchase of a new Fordson Dexta which, with a hydraulic linkage incorporating draft control, 32hp from the new F3 144cu in engine and a ‘Live Drive’ PTO, was at the forefront of farming technology.

Soon the Dexta was sharing its duties with a 1962 New Performance Super Dexta in the updated livery, once again purchased from TD McFarland, where John McCaughan’s youngest brother, James, was by then serving his time as an apprentice fitter.

As larger implements and modern farming methods developed, there was a demand for tractors with increased horsepower, so John invested in a secondhand, late ’50s Super Major. This Dagenham icon took on the more demanding field operations, and spent some time during the winter months belted to the seed dresser in the barn, adding to the legend of the Major’s versatility. 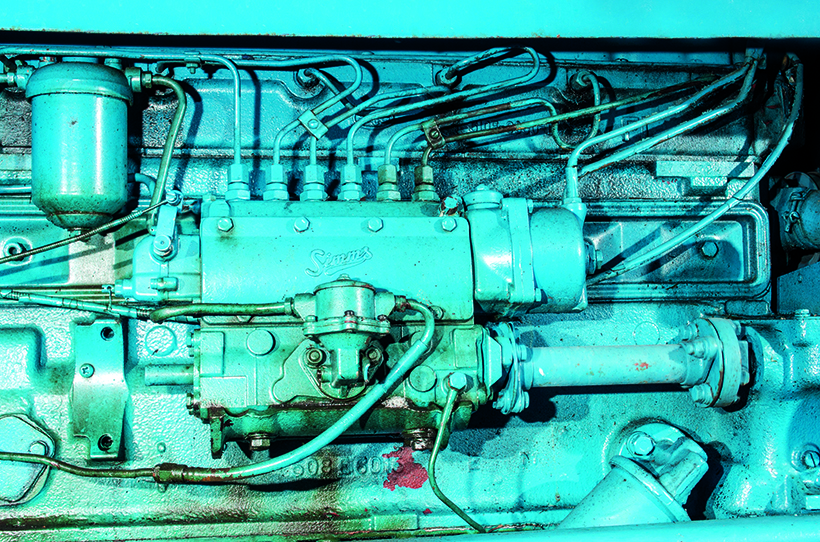 The engine, with a Simms injection pump, develops around 72hp.

For the duration of tillage operations, the Super Major ploughed and pulled a set of FR discs, after which the seedbed was made ready with a set of trailed harrows, before the barley crop was sown using a Sunshine seed drill running on steel wheels.

Throughout its working life, the Super Major performed faultlessly and is still powered by its original engine, although John has replaced the old, cast front wheels with a pair of pressed-steel items to make steering easier in the absence of any power assistance.

During this period, James was developing his knowledge and experience of Ford products across its motoring, agricultural and truck divisions. “In those days, you had to be able to turn your hand to any sort of vehicle in the Ford range,” James says. It’s not surprising that the family car has borne the Ford name on the bonnet since the arrival of their Ford Prefect, which was followed by a MkI Consul, a Zephyr 4, a MkIII Cortina, a Sierra and a Mondeo. Of course, the fact that the salesman was John’s cousin may also have had something to do with the brand loyalty!

Extensive knowledge
While today’s specialist mechanics may be expert in the maintenance of specific machines, James’ extensive knowledge was to have a lasting influence on the tractor fleet at Ballyversal.

“TD McFarland looked after the Ford vehicles at the Monsanto plant on the outskirts of Coleraine,” remembers James. “Among them was a Thames Trader lorry with a skip body, which was used around the factory site and for short journeys in the locality. During the late ’60s it came into McFarland’s to have a replacement short engine, fitted and I remember being given the job. 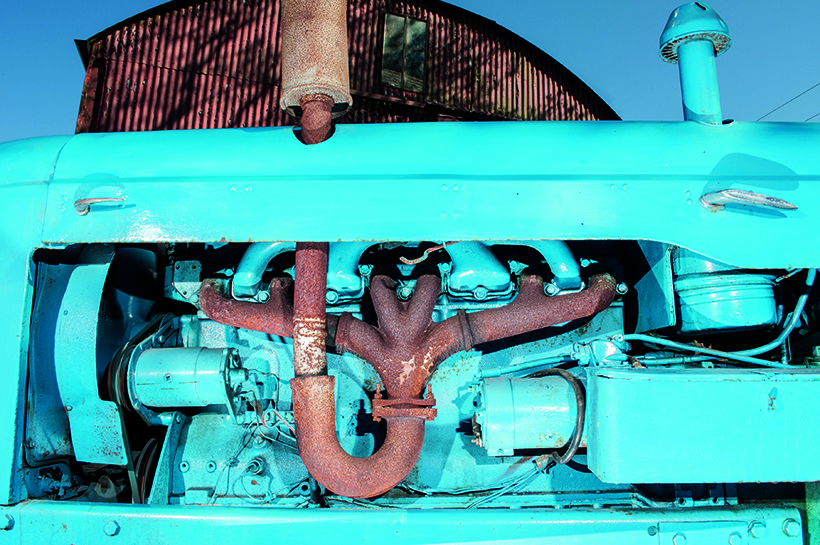 The Major retains its original radiator.

“About four years later, in the early ’70s, the lorry had reached the end of its roadworthy life but, since I had serviced it over the years, I knew that there was still a lot of life left in the engine. I also knew the driver quite well and, when he told me that the firm had decided to dispose of it, I went into the office and did a private deal to buy it.”

James had a plan. “I treated it as a wee personal project. I knew that if John and I could find a good New Performance Super Major and fit the six-cylinder Thames lorry engine, then we would have a powerful, reliable tractor without having to spend a lot of money.

“One of the drawbacks of the earlier Majors was the gearing of the PTO, which gave 540rpm at about 1,300 engine rpm – far too low on the engine’s power curve. As well as that, the PTO drivetrain was a bit under-engineered. The New Performance Super Majors had a stronger back end, and a better power take-off ratio.

“The six-cylinder engine was putting out about 72hp, compared to the 54hp of the Super Major, so the extra strength was going to be needed.” 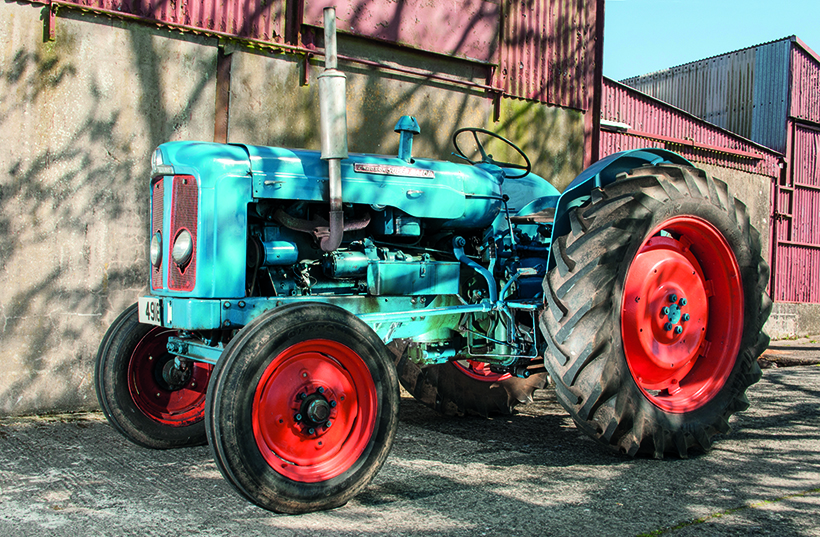 The original Super Major is still on the farm, too.

This sounds like a very interesting challenge for an ‘auld hand’ mechanic, but it was more than just a test of James’ engineering skills. According to the Ford tractor price list of June 1971, the Basildon-built Ford 5000, which was rated as a 75hp tractor, would have cost £2,012 – which included the factory-fitted safety cab, deluxe seat and 12×38 six-ply rear tyres. Power-assisted steering was £115 extra, a belt pulley was an additional £36.32 and the buyer was expected to fork out an additional £4.29 for a tool box.

Cheaper alternative
By James’ reckoning, his plan would win the battle of the balance sheets easily. “I paid £500 for the lorry and I think we paid the same for a secondhand New Performance Super Major from a dealer in Co. Armagh.

“We lifted the engine out of the lorry and I broke the chassis and sold as many of the parts as I could. I can remember that the gearbox went to a buyer in South Africa. In the end, I sold the parts for enough money to cover the purchase price of the lorry.”

In theory, this was starting to look like a very attractive alternative to a brand-new tractor, but how did it work out in practice? “Bolting the six-cylinder engine up to the tractor bell-housing was straightforward, and both starter motors were the same, so that wasn’t a problem. The biggest issue was with the sump. On a Major it’s cast iron, so it’s ideal for
taking the forces from the front axle through the ‘A’ frame stabiliser. On the lorry engine, there’s an alloy sump, so we had to have a think about that! 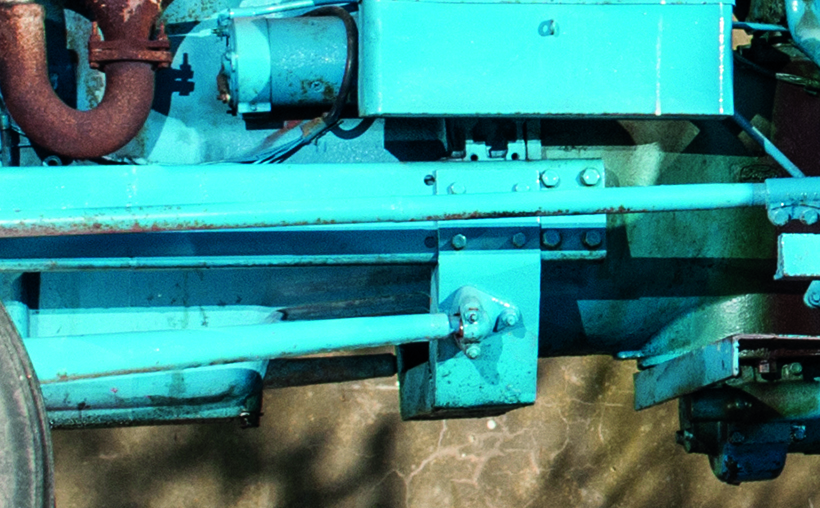 “We’d extended the chassis rails to cover the extra length of the longer engine, and then we fabricated a bridge piece and bolted it under the sump. I went to a breaker and bought the radius rods and their socket mountings off a Massey Ferguson and fitted them to the sides of the bridge piece.

“I had to extend the clevis ends of the radius rods to fit the Major’s front axle, and then weld a section into the steering track rod. It was just a matter of solving one problem at a time.

“We bought an extra bonnet and cut out what we needed to extend the original. We fitted stronger springs in the clutch to transmit the extra power, but that meant that there was more leg muscle needed on the pedal, so that ‘work-around’ was a compromise.”

John put his new tractor to work making silage, ploughing, spreading slurry and doing all the work that the neighbours were doing with their modern MF 185s and IH 574s. These tractors have long since disappeared from the local landscape, but the old Major kept going. 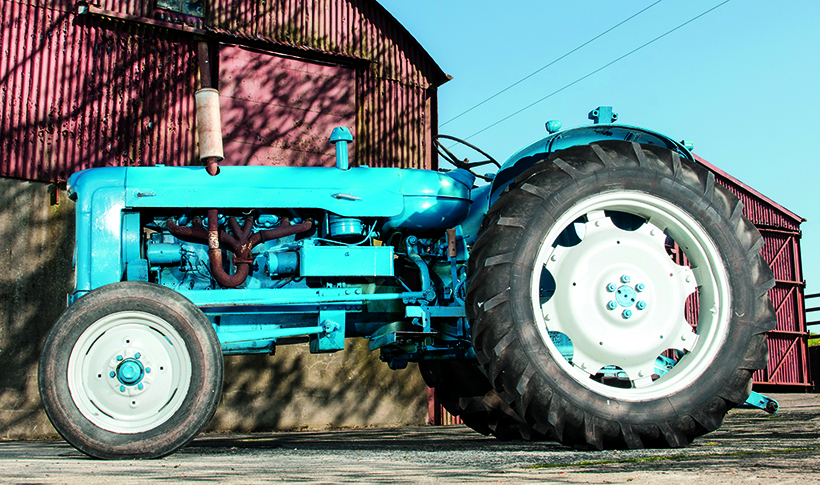 With two additional cylinders, the tractor’s extra length is apparent in this shot.

By the 1990s, John’s tractor line-up had changed. At silage time there was a 3600 on the buckrake, a 4610 with an AP cab and ‘Rubik’s Cube’ gear change on carting duties, but the big Major was still leading the operation, mowing with a PZ mower and lifting the grass with a JF FC80 side-mounted, precision-chop harvester.

There’s no doubt that James and John achieved their goal. They converted a 1960’s icon into a 1970’s frontline tractor for less than a quarter of the price of a new model, and had a lot of satisfaction from putting the plan into action. 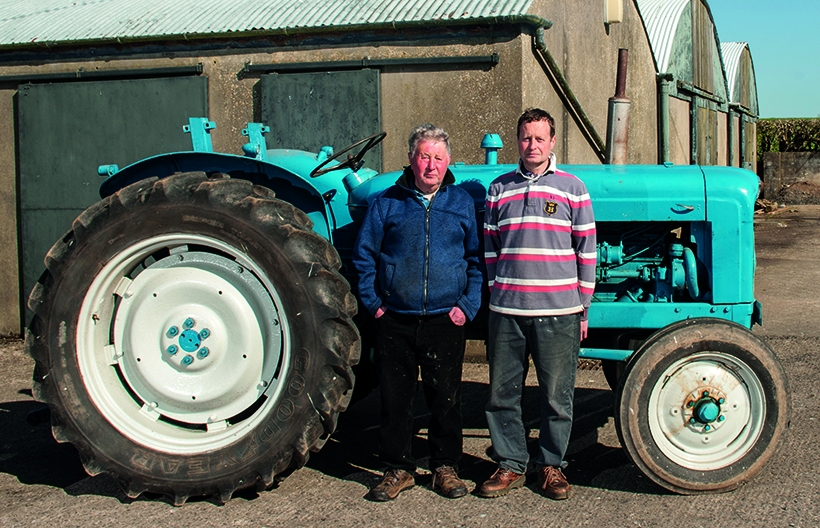 They built a very attractive-looking Major but, best of all, they have created one of the sweetest, best-sounding tractors that Fordson never built! 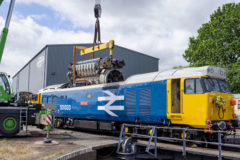 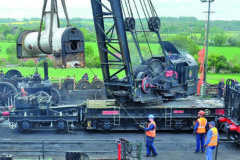