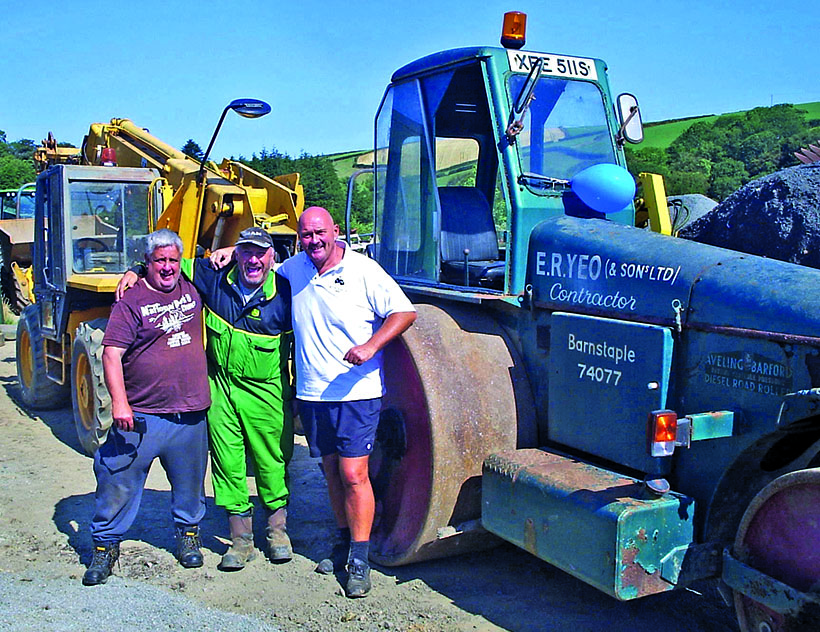 Most people have cars in their garage so, when I told a neighbour that I had a ‘roller’ in mine, he thought I meant a Rolls-Royce. You can imagine his surprise when I revealed my Aveling Barford diesel roller! In fact, I have three of them; a GA, a GFX and a GB that’s been covered in various Classic Plant & Machinery magazine articles.

I run a number of machinery pages on Facebook, one of which covers Aveling Barford rollers. One day someone posted a roller for sale on my page and, although I wasn’t even looking for another at that time, after seeing the photos and the posted video of the machine, I was hooked. 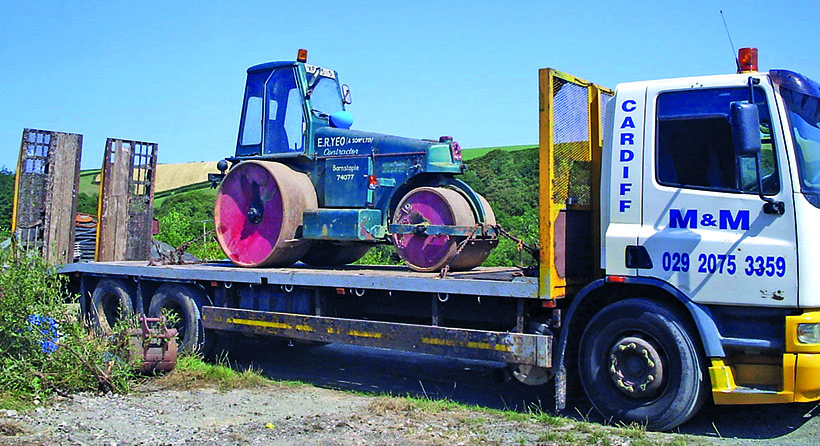 Loaded up and ready to go!

I did a bit of research on the roller and found that this machine would sit fourth in the range sequence among the ones I already owned. So, this instantly became a ‘no-brainer’, and the roller looked destined to join my fleet. Then I contacted the seller to register my interest, but discovered that the machine was in North Devon; certainly a long way from home. 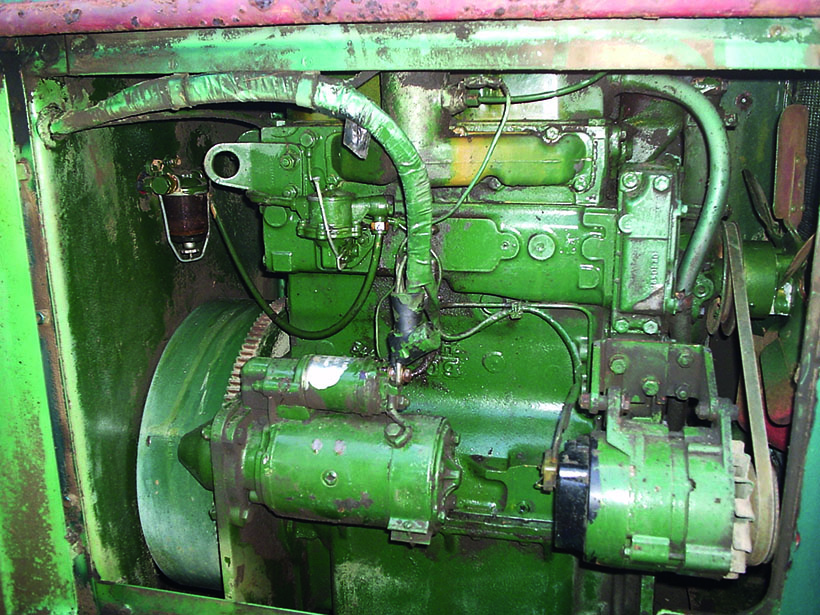 So I got in touch with my usual transport provider, M&M Low Loaders Ltd of Taff’s Well, Cardiff. That company has done many moves for me over the years, including a BTD6 Drott move from South Devon, and I always find the staff helpful. So the roller deal was done and dusted, and the transport booked.

I find collecting a machine just as enjoyable as the restoration. I had planned our route on what turned out to be a very hot and sunny day. So, we headed for Bideford, a three-hour drive away. We made very good time and were there by 10.30 after getting our transport down some of those famous, tight Devon lanes! 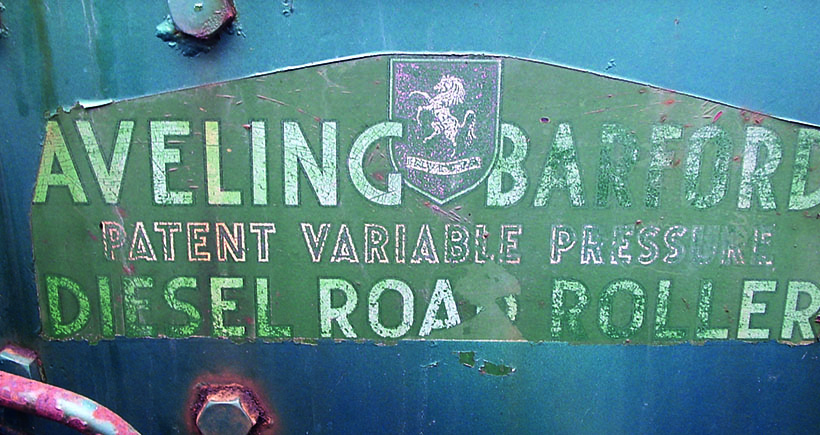 This decal highlights the weight transfer system on the GRT roller.

We were met by the sellers of the machine, but I’d also contacted the original owner of the machine to see if he could make it to Bideford to say farewell to his old roller, and have a photo-shoot with it. So, Mark Yeo was there with Fred and Sue of F&S Tractors from Parkham, in Devon, the owners of the machine. Yeo & Sons are well-known contractors in the North Devon area. When I worked on plant in Devon in the early 1980s, I was aware of the company, as the firm I worked for had dealings with Yeos – it’s a small world! 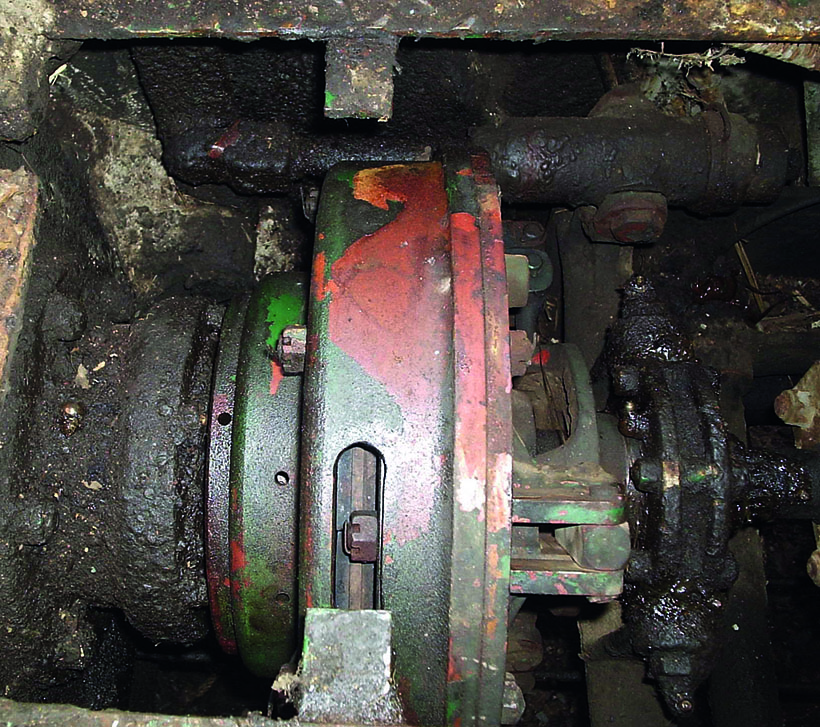 The roller’s clutch has two clutch plates with a drive plate in between – this gives instant forward/reverse manoeuvring.

After some refreshment, we loaded up and headed back to Wales. We were soon unloaded and the roller was at its new home. The road roller is a Aveling Barford GRT, around 650 of this type were build between 1968 and late 1978. Their working weight with water ballast was just under nine tons. I had obtained the build details from Andrew Watson of the Motor Roller Register. My machine was delivered to Yeo Contractors in February 1978. It’s registration number has a Lincoln prefix, rather than a Devon one. 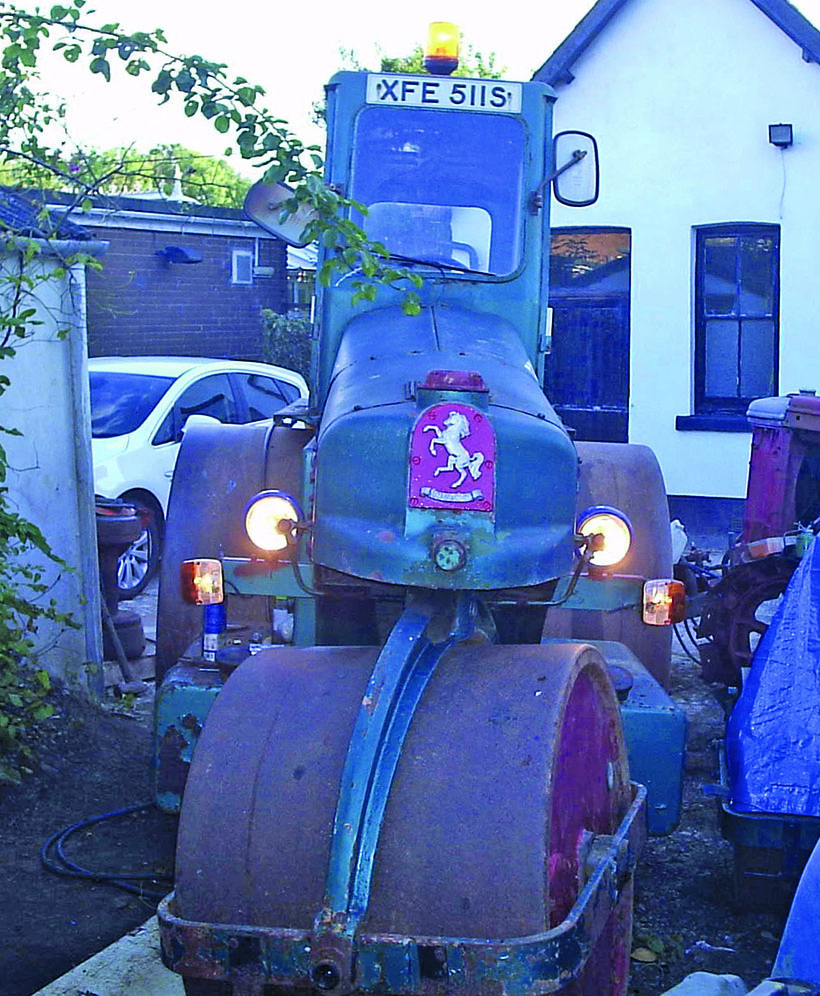 The machine is fitted with a Perkins 152 three-cylinder diesel engine. Its recorded hours are very low, just 2,050. It has an instant forward/reverse twin-plate clutch operated by a lever on the left side; the same position as the Aveling & Porter steam rollers these machines replaced in the 1960s. It also has a high/low gear and is fitted with the variable weight transfer system. This is a large weight on a bogie which runs under the lower part of the machine on rails, to transfer weight from the rear to the front, and is on a pulley system operated by a crank handle fitted onto a shaft on the rear left side of the roller. This machine isn’t fitted with a scarifier. Most councils had the Aveling Barford GC/GD range of rollers, which weigh 10 tons plus, so mine is just below that range. 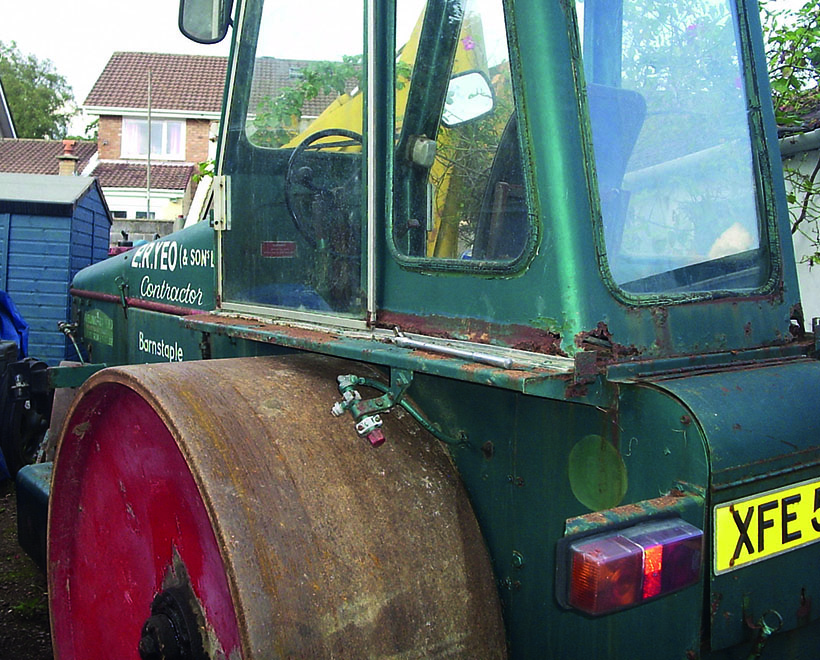 I removed the rear roll plugs, they were full of water to ballast the machine, increasing its weight by over a ton. Its water sprinkler tanks hold 40 gallons! So a lot of extra weight can be gained using water. The roller is also fitted with a diff lock as these machines can be unstable on steep roads and can slip. So the diff lock is only used if the roller starts to loose traction.

I gave the machine a full appraisal and listed the jobs that needed to be done. All the lights needed renewing, and the brake cross shaft was very stiff through lack of use. But the biggest job centred on the cab repairs, which are progressing well. 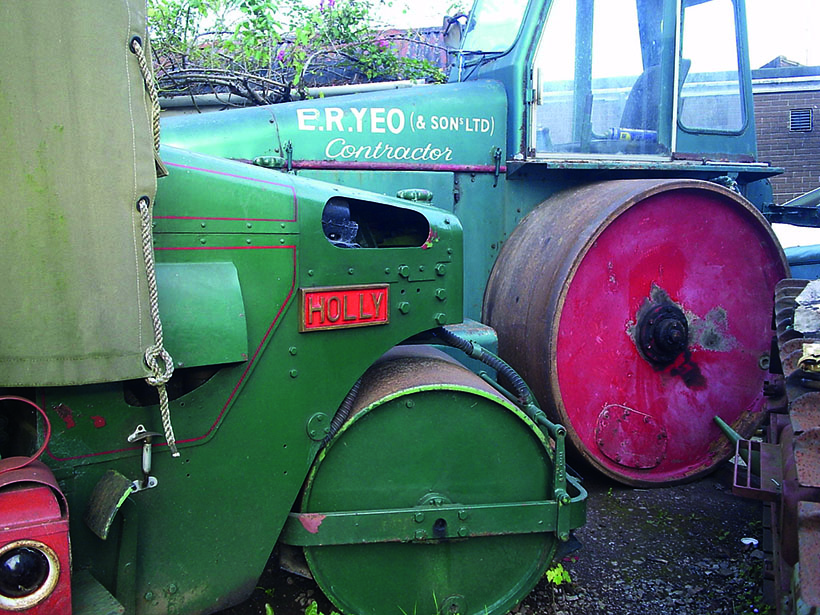 Martyn’s GA roller in front of the GRT, showing the size difference.

The main mechanical issues with this machine were with its brakes. Standing around had caused the brake cross shaft to seize up in its bushings. Lots of heat and release oil had to be used. The brake linings are almost new. That task took about five hours to free off to my satisfaction. The parking brake wheel was also stiff. Now it all works as it should do, and holds well on a slope. 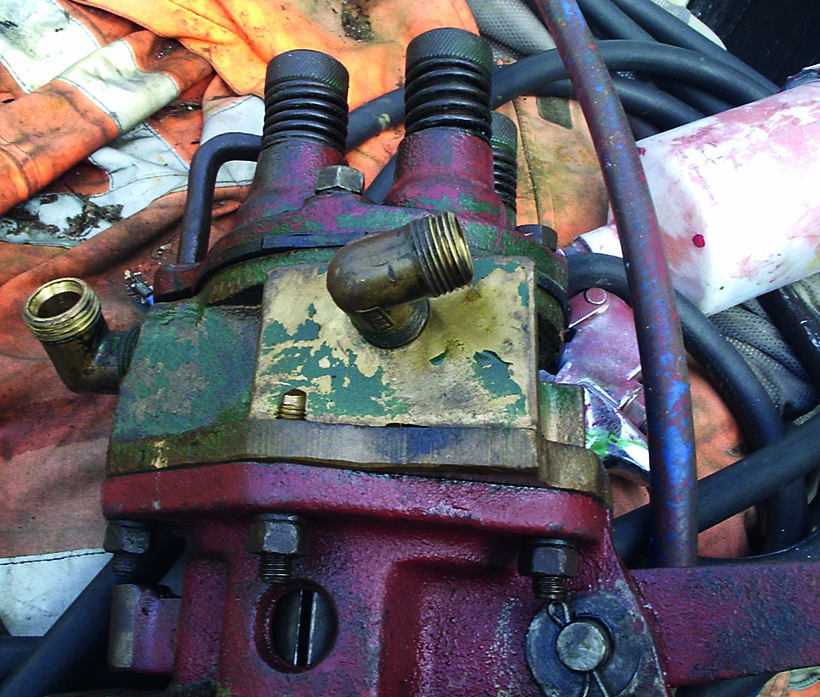 The water sprinkler system pump is removed for a check-over.

The electrics needed attention as they didn’t work. A small amount of rewiring was required and I managed to obtain replacement lamps via eBay. The rear lamp is a Buttler Drott unit. I stripped the horn button and got that to work. The same treatment was needed with the wiper motor. A new fan belt was fitted, and the alternator was checked and serviced. 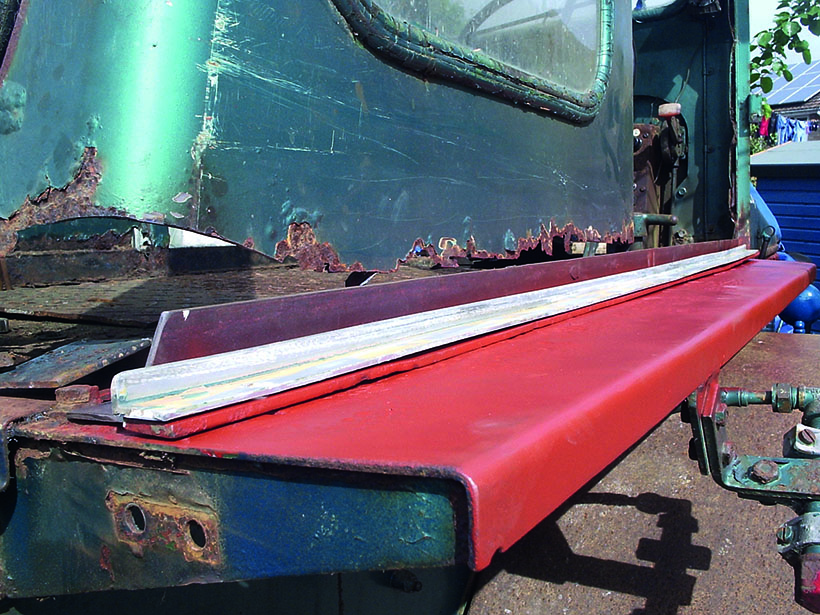 The water sprinkler pump is driven off a push rod set-up off the gear box, so I stripped this item down. The diaphragm was found to be in good condition, but the top rubber seal was perished. I intend to make up a new seal from neoprene rubber. The engine has been fully serviced and all the grease points greased up.

So the roller is progressing at a good pace. The cab is being refurbished, a few grease points need sorting out and the final preparation work for painting is on-going. All the window rubbers will be renewed.

All the windows were removed as welding in three places around the cab was required. Once this was done, minor filling was required and high-phosphate primer was applied. Next stage was to refit all the windows, with new Clatonrite rubbers and beading. 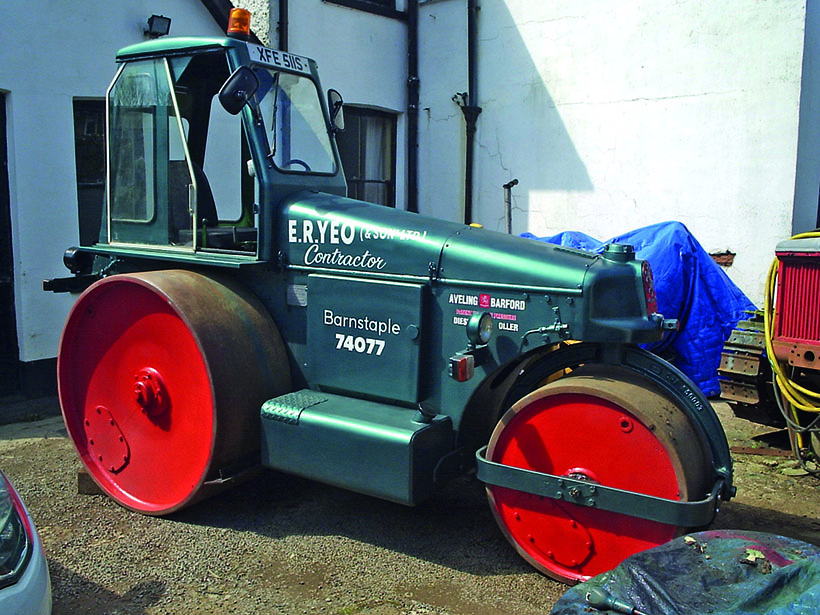 The finished article! Martyn’s GRT roller is ready for a trial run.

Attention then turned to paint preparation; lots of rubbing down! This task was made harder due to restoring the machine outdoors, as it’s too big to go in the garage. The livery choice was mine; I decided to repaint the machine into its original Yeo & Sons livery – a metallic Chrysler blue/green. Aveling Barfords are usually mid-Brunswick green. My paint supplier matched up the paint for me.

The Aveling Barford decals were made to my measurements by Dab Hand Signs Ltd of Tonyrefail. I’ve used this company for many years and it does a first-class job. The signwriting was done by Nick, the signwriter from Pencoed, to the original measurements.

The final paint touching-up was then done to complete the job. The rolls were given a final coat of traffic red paint, and the scraper bars were painted black.

All the paint masking was removed and a full functional test carried out, including the roller water spray system and lighting check. The flashing beacon was serviced and works fine. This 43-year-old roller its now in fine fettle and could do a day’s work with no problem!

I would recommend doing a roller restoration to any enthusiast. They are great to work on and have been abused less that the tracked loaders. I’ve sent the photos to Mark Yeo and he informs me that the prints will be framed and hung in his office. He’s delighted that I kept the roller in Yeo’s livery. He has many memories of this old roller as an owner and its regular driver. That makes the restoration so worthwhile. I hope things change this year, so that I can start exhibiting it at vintage events. 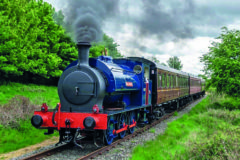 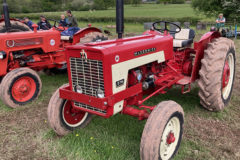