Bob Moorman charts the life of one of the most recognisable, 100-year-old showman’s engines around, Burrell Special Scenic No.1. 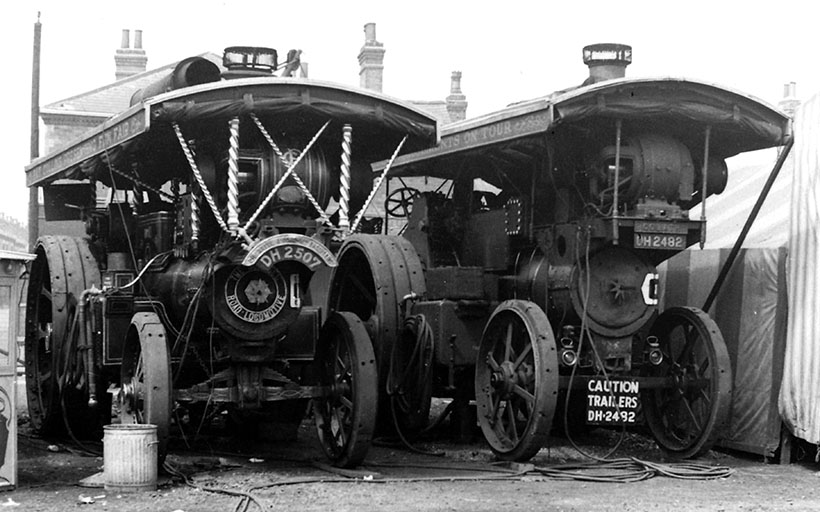 Burrell No. 3865 Special Scenic No.1 (No. 3865), left Burrell’s Thetford works on Thursday, November 18th, 1920, and was delivered – by train – to showman Pat Collins of Bloxwich, near Birmingham, who named it No.1. The 8hp engine was put to work driving the new Orton & Spooner Scenic Railway, also called No.1! Pat Collins was part of a large showman family that owned some 20 Burrell showman’s engines of one type or another over the years; only seven were bought new, the remainder being secondhand. 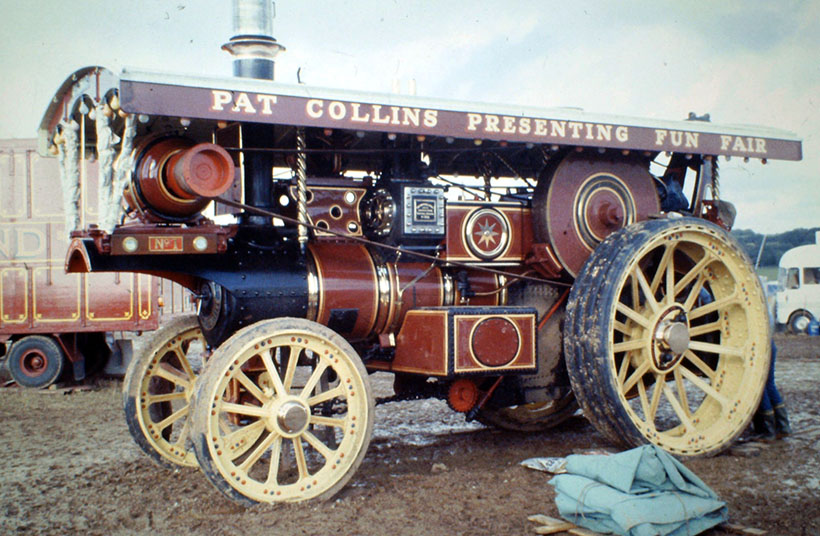 One fair that No.1 attended many times was Aston Onion Fair, held in Birmingham, which is why the canopy is decorated with strings of Spanish onions. The engine worked up until WW2, when it was laid-up. By then, it was in need of a new firebox and had, apparently, been involved in a fire. After the war, a new firebox was fitted and No.1 was thoroughly rebuilt, then continued working until 1955. It was used in 1951 to tow Pat Collins’ big dipper from Sutton Coldfield to Battersea, for the Festival of Britain, mainly as a publicity stunt. During the post-war period, many photographs were taken of the engine at work, and plenty survive today. Unfortunately, though, none have been found of its pre-war activities. 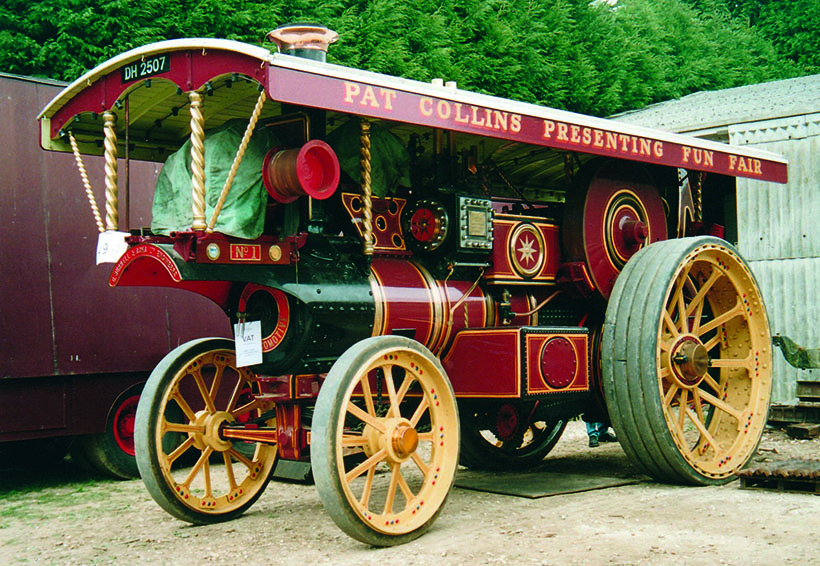 No.1 seen on October 11th, 2002, ready to be sold by Paul Gooderham of Cheffins the following day. (Pic: Peter Love)

In 1961, John Crawley managed to buy No.1 which, by then, was in need of a considerable amount of repair work – a new firebox, front tubeplate, smokebox, tubes and tender were all required. The boiler work was carried out by Midland Rolling & Haulage Co Ltd, in Yardley, Birmingham; the same company carried out most of the repairs for Pat Collins. 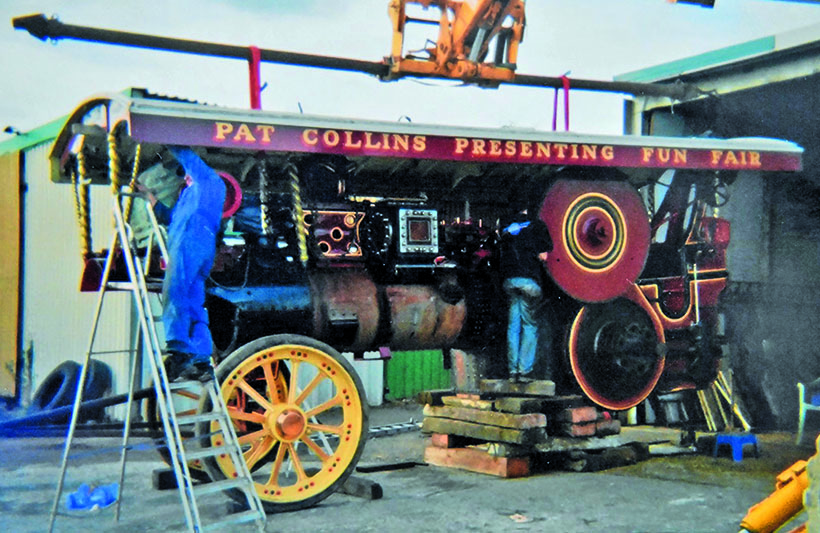 In October, 2002, stripping the engine has begun, which took just three days. Here the canopy is about to be lifted off, with an interesting lifting beam utilising the crane jib from No.1’s crane. (Pic: Terry Maynard)

Unfortunately, John became very disillusioned with the cost and the way the work was being done, so took the engine to James Gilbert & Sons, in Leighton Buzzard, for completion plus the fitting of a new canopy. But John was never happy with the work done to the engine by either company so, when approached by Arthur Beale from Wisbech, Cambridgeshire, in the mid-1970s, he sold it to him without hesitation. 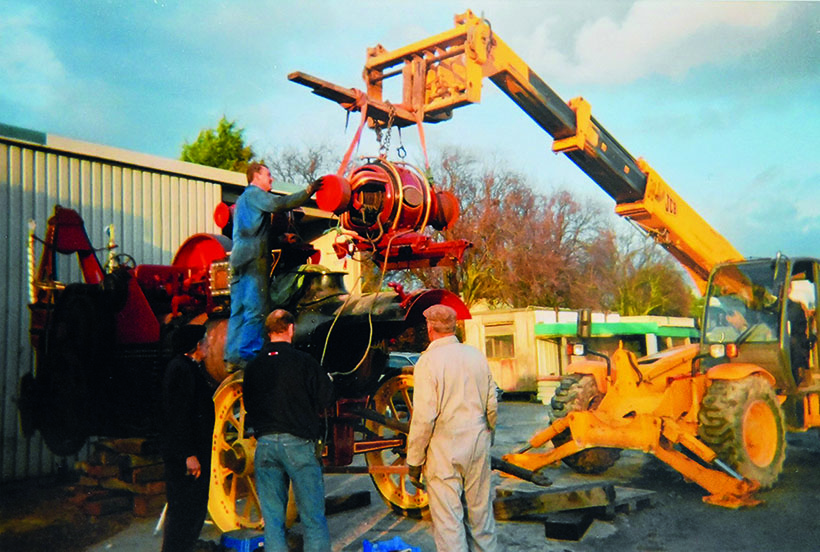 The dynamo comes off, with Phil Retman guiding it down as the late ‘Uncle’ Les Warren has some chatter in the left of the front wheel. (Pic: Terry Maynard)

Arthur Beale engaged Stan Burgess from Haddenham, Cambridgeshire, to renew the tubes, rubber the wheels again and work on the motion, finally repainting the engine with the coat of paint that’s still in place today, and remains in excellent order! 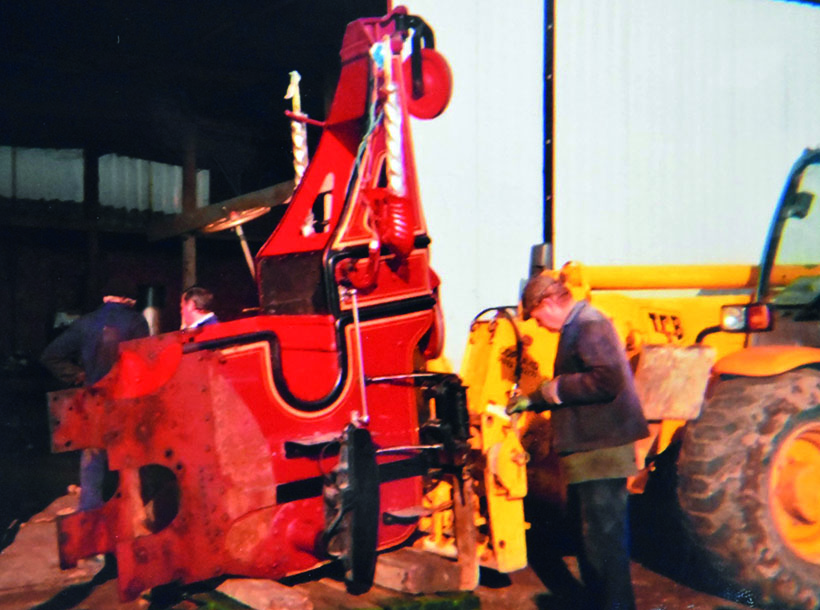 The engine had its rally debut at the Peterborough Expo in 1982, an event organised by John Crawley at the Peterborough Showground. For some reason, though, after a few rallies, No.1 was put on display in Thursford Museum, where it then remained for the following 11 years. 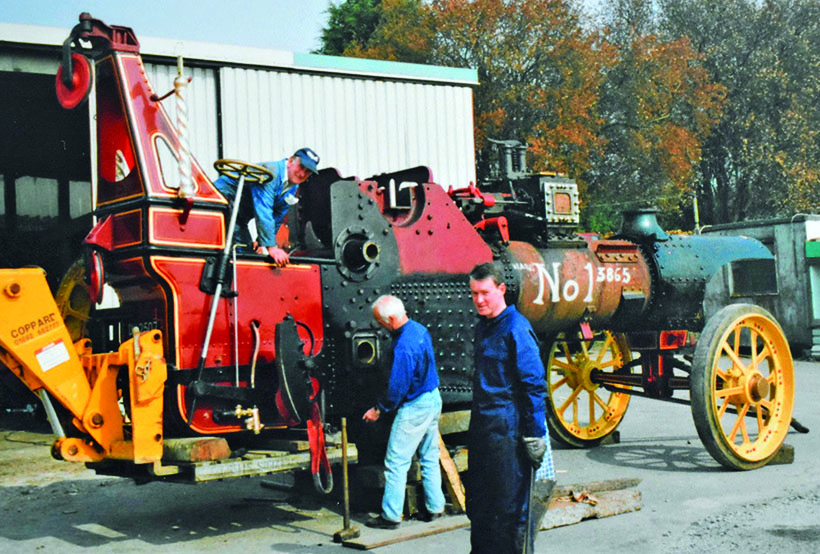 No.1’s return from Bicknells, with repaired boiler, in March 2003. Terry’s in the tender and Phil Retman is looking on. (Pic: Terry Maynard)

The engine was then bought by Fred Coupland from Carrington, in Lincolnshire, and extensively rallied, often powering one of Fred’s fairground rides. Upon Fred’s death in 2002, an auction was held by Cheffins to dispose of his extensive collection of engines and rides, and No.1 was bought by Terry and Val Maynard from Hadlow, in Kent. 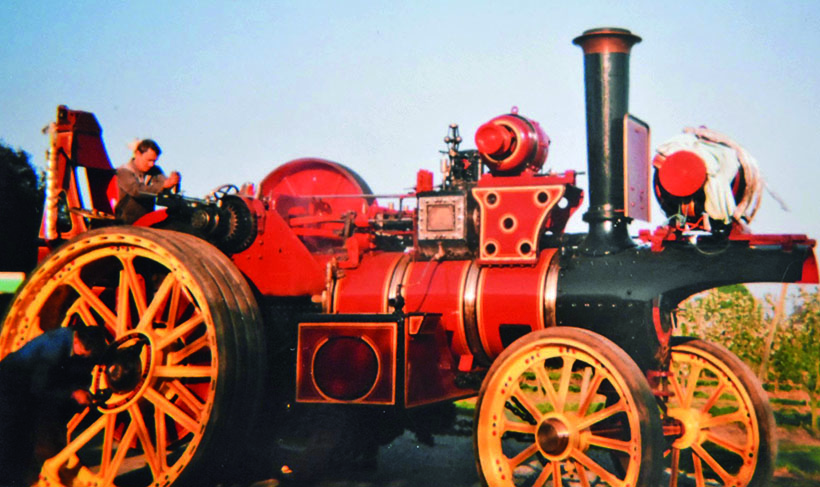 At the beginning of May, in 2003, we see the first steaming after the rebuild, with Phil Retman at the controls. (Pic: Terry Maynard)

The late Bernard Smith, who prepared the engines for the auction, later remarked that he suspected the Maynards would be the successful bidders, as Terry was the only person to ask about the condition of the boiler, rather than just speculating about what price it was going to make. 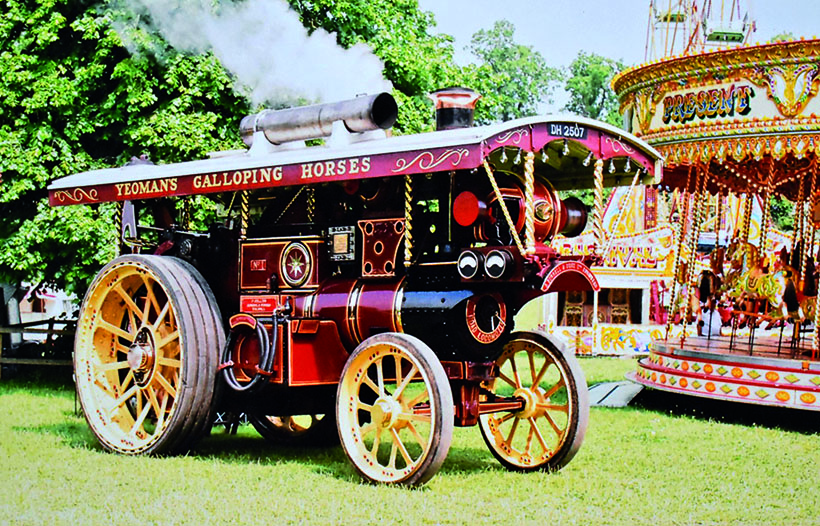 Terry keeps his promise; No.1 makes it to Strumpshaw in May, 2003, and becomes the star of the show. (Pic: Terry Maynard)

By this time, of course, No.1 was again in need of major boiler work before it could be steamed. Jimmy Key, of Strumpshaw, told Terry at the auction that he wanted No.1 on display at his rally the following year, irrespective of the condition, as he knew restoration work would be extensive and quick. Terry was no stranger to restoring and rallying steam engines, having owned and restored many others, but he’d always wanted a Burrell Scenic, and had finally achieved his goal! 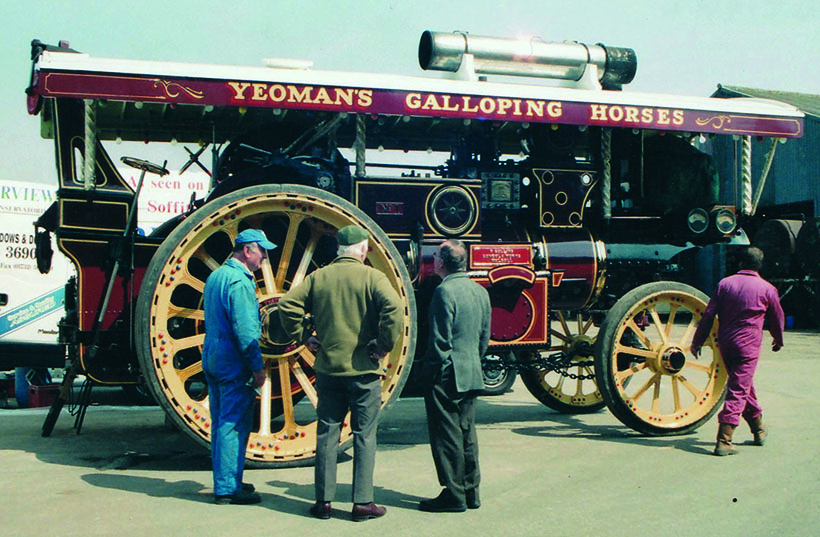 It’s April 21st, 2007, at Goblands Farm, at the Weald of Kent Steam Plough Club’s anniversary event, as Terry talks with the late Robert Oliver looking at No.1, with Damon Holah on the move at the front. (Pic: WS Love)

Having got No.1 back to Kent, no time was wasted in stripping the engine, while taking care not to damage the paintwork. The small team stripped it in three days, after which the boiler was sent to Bicknell’s boiler works where extensive repairs were carried out, including the fitting of a new flanged and riveted firebox, throatplate, front tubeplate, plus backhead repairs. One of the hardest jobs was fitting the throatplate on to the barrel. 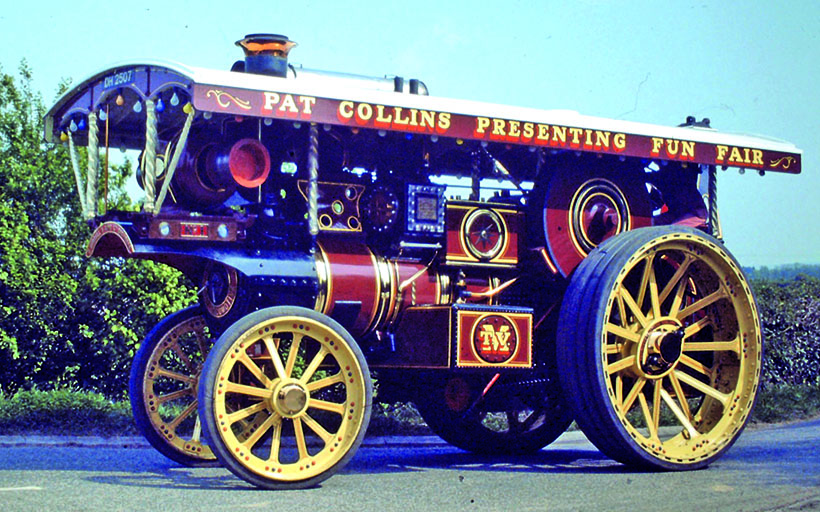 No.1 on the way home from the Weald of Kent Traction Engine Society’s 50th anniversary road run, on April 22nd, 2007. (Pic: Bob Moorman)

The boiler was finished in record time, and delivered back to Terry on March 20th, 2003. This was followed by a rapid reassembly and, on its first steam test at the beginning of May, Terry ‘phoned Jimmy Key and blew the whistle to confirm that No.1 was finally back in steam! Then, as promised, the engine attended the Strumpshaw Rally at the end of the month. 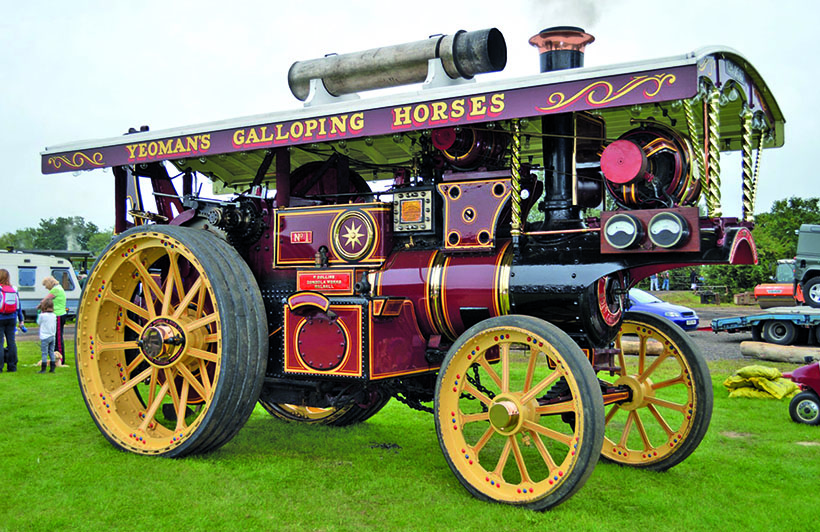 Since then, maintenance and improvements have continued, with new gears, pistons and rings being fitted. Also, plenty of work was carried out on the motion, and the valve gear was overhauled to an excellent standard by Jimmer Marsh.

No.1 must now be one of the most extensively rallied Burrell Scenics around. Over the past 17 years, it’s appeared at events all over Great Britain, but there have been trips to the Continent, too, including regular visits to France, Belgium, Holland and Denmark. 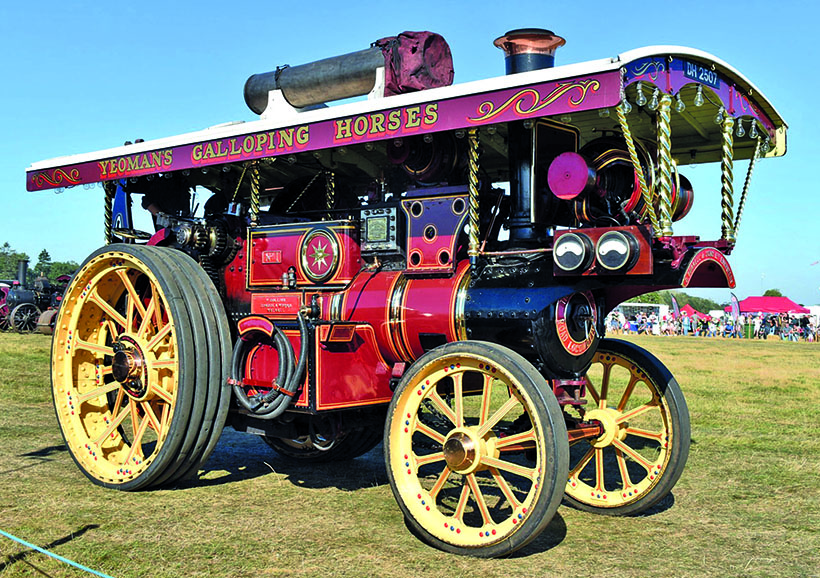 The now defunct Henham Rally was one of the last that No.1 attended – September 21st, 2019 – before the pandemic struck. (Pic: Bob Moorman)

After many happy years of ownership and, having recently restored Burrell 5hp road locomotive Queen Mary, Terry and Val decided that it was time for No.1 to find a new home, so the engine’s been put up for sale in its centenary year. If you are seriously interested then call 07769 717854, but no time-wasters, please! 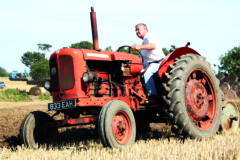 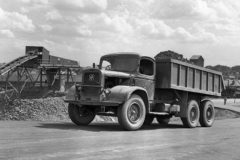