David Taylor lives in the county where Harry Ferguson was born and, as Willie Carson reports, is a lifelong fan of classic Ferguson and Massey Ferguson tractors. 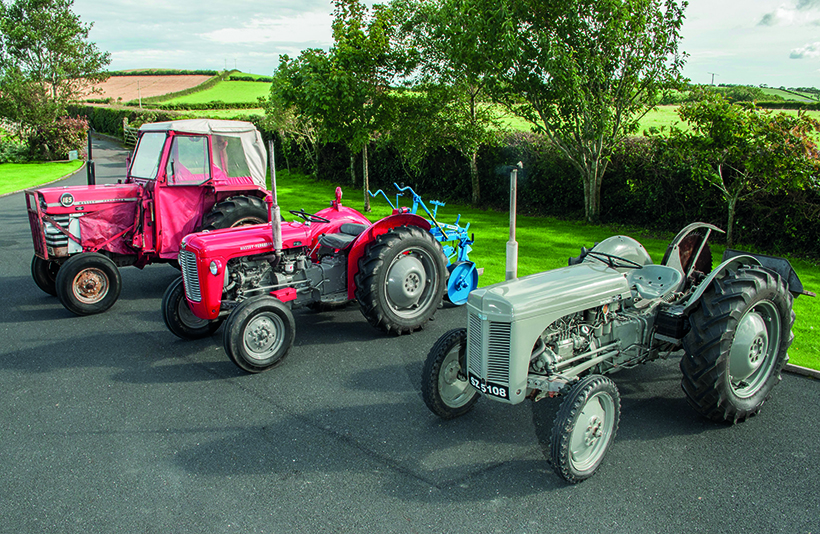 David Taylor spends time working with and on his Ferguson and Massey Ferguson tractor collection, and finds it all very relaxing.

“I spent a lot of my childhood on a farm belonging to a friend of my father’s. Bobby Moffett worked with cattle, pigs, cereals and spuds,” says David, as he explained how his interest in tractors began. “I learned to drive on Bobby’s 135. His other tractor at the time was a 165, which was traded in for a 185. That was followed by a 690 2WD, a 698T 4WD and then a 399.”

David remembers all of those tractors really well, they were a major part of growing up, but he was to start his working life away from farming. “In my first job, I was the office boy for a refrigerated transport firm, which had lorries going all over Europe. At that time, computers were just coming into the job and, being the youngster in the office, I picked the system up fairly quickly. 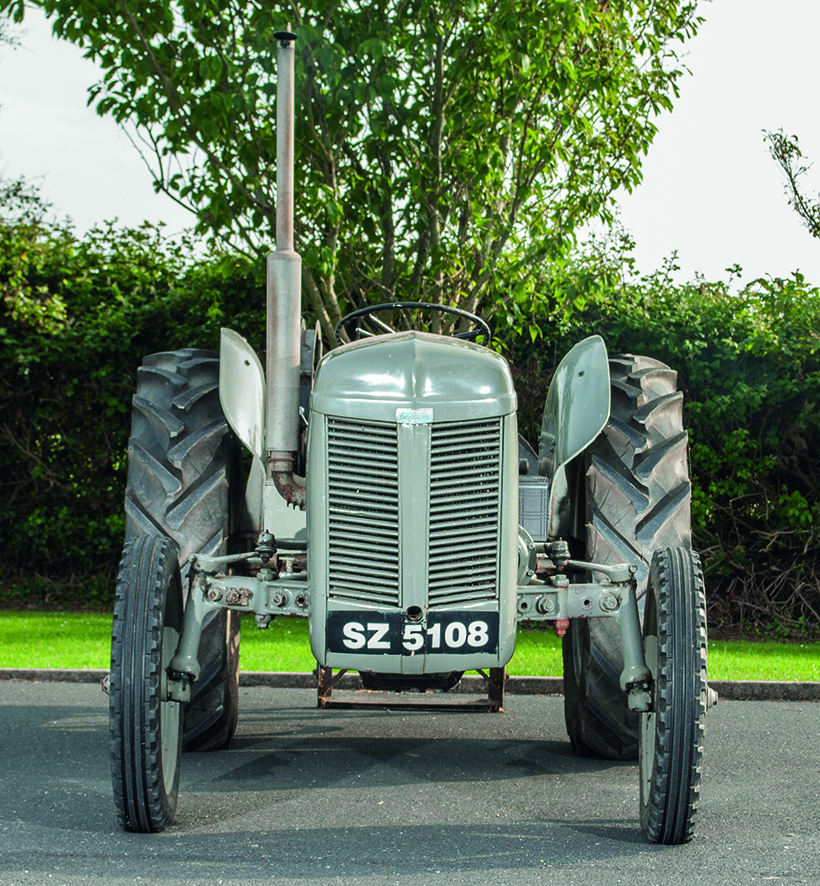 “Because I understood the software better than the other staff, my workload shot up, and I was never really able to relax from it. I was told that I needed a hobby, a form of stress-relief and, while I was thinking about it, Albert Reid, who was the workshop manager, suggested that I buy an old tractor to play with. I took his advice and bought a TEF 20. It was first registered in 1955, and had spent its life on one Co. Down farm, which was owned by two brothers.

“I’m told that one brother went out to check on livestock on a frosty winter night, slipped on ice and fell. After a while the other brother began to worry about him and went out to see if he was alright, but he must have slipped as well, because they both died during the cold night. 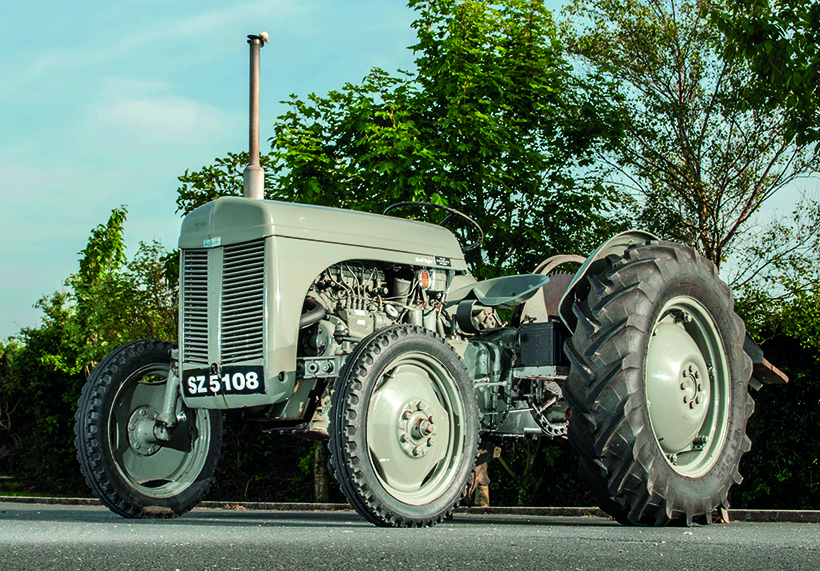 David won’t forget the many evenings spent with friends, working on this, his first tractor.

“When I brought it home, I remember my father scolding me about oil dripping everywhere, so I took it up to Bobby Moffett’s and started to work on it in his barn. In the evenings after work, I’d be up at Moffett’s with two other neighbours, Tommy Steele and Jack Dickson. Some nights there wasn’t too much work done, but there was always plenty of craic.”

Biggest challenge
The biggest challenge with David’s first foray into the world of tractor restoration, was to return the gearbox to normal function. “There were two ratios that didn’t work, and the cause was two gears with missing teeth. So I bought a scrap TED 20, and replaced the broken gears with parts from the ‘breaker’. There was a layer of sludge on the bottom of the back-end housing, so I had to spend a lot of time with a paint brush and methylated spirits cleaning that up. The hydraulic system itself was fine. 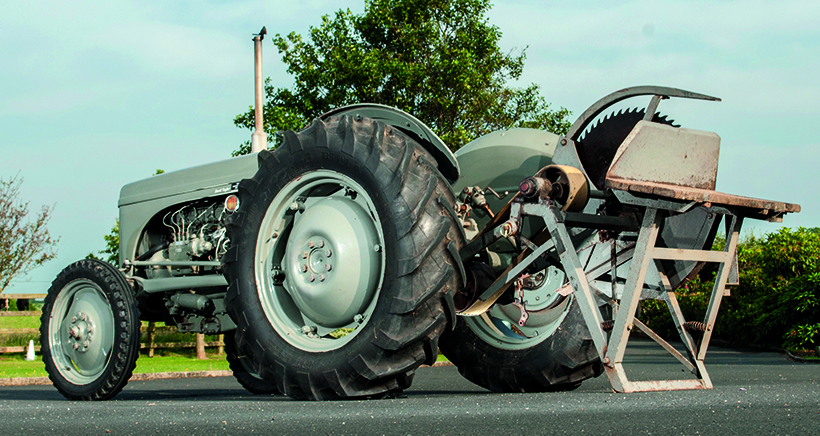 Harry Ferguson’s strategy was based on the versatility of his designs.

We fixed the oil leak at the end of the left-hand half shaft with a new oil seal, re-shimmed the axle and replaced the brake shaft bushing at the same time. The engine and steering didn’t need anything other than normal servicing and, in September 1993, the tractor was ready for a trip to the paintshop. It still has the front tyres that were on it when I bought it, but I have replaced the rears for a pair of 12x28s.”

David has used his TEF 20 to power his saw bench, but he also uses it to take part in the local match-ploughing scene. “I grew up with Bobby Moffett’s identical twin nephews, David and Samuel Gill. They eat, sleep and breathe ploughing, and went on to win the World Ploughing Championship in consecutive years – David in 2007, Samuel in 2008. I ploughed a bit locally with the TEF 20, and won a five-gallon jar of oil at one match, but I was only in it for fun. David Gill has set up The Ploughing Academy Northern Ireland, to help encourage and inspire new entrants into competition ploughing, so I’m happy to help with that.” 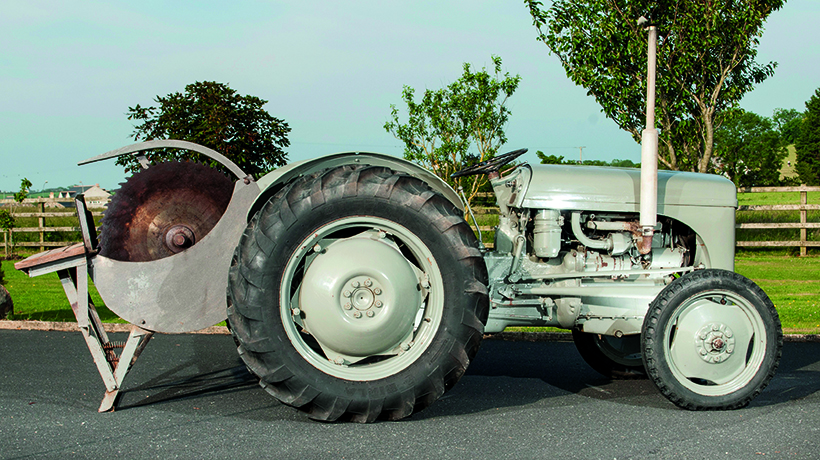 As well as cutting firewood and ploughing, David uses the TEF to cut hay with the finger-bar mower.

The Massey Ferguson 35X
“In 2010, I bought a 1964 Massey Ferguson 35X,” says David, moving on to the next tractor in his collection, “It was originally an East Anglian tractor, and I don’t know much about its early life, but it found its way to a dealership in Banbridge, Co. Down. In the early 1990s, my wife’s uncle John retired from his position as an agronomist at The World Bank in London, and bought a smallholding in Mayfield, East Sussex. Despite the distances involved, he asked my father-in-law to find a suitable tractor. He bought the 35X, drove it to the ferry at Larne harbour, crossed over to Scotland with it, where he met John who’d driven up from the southern England, towing a trailer.” 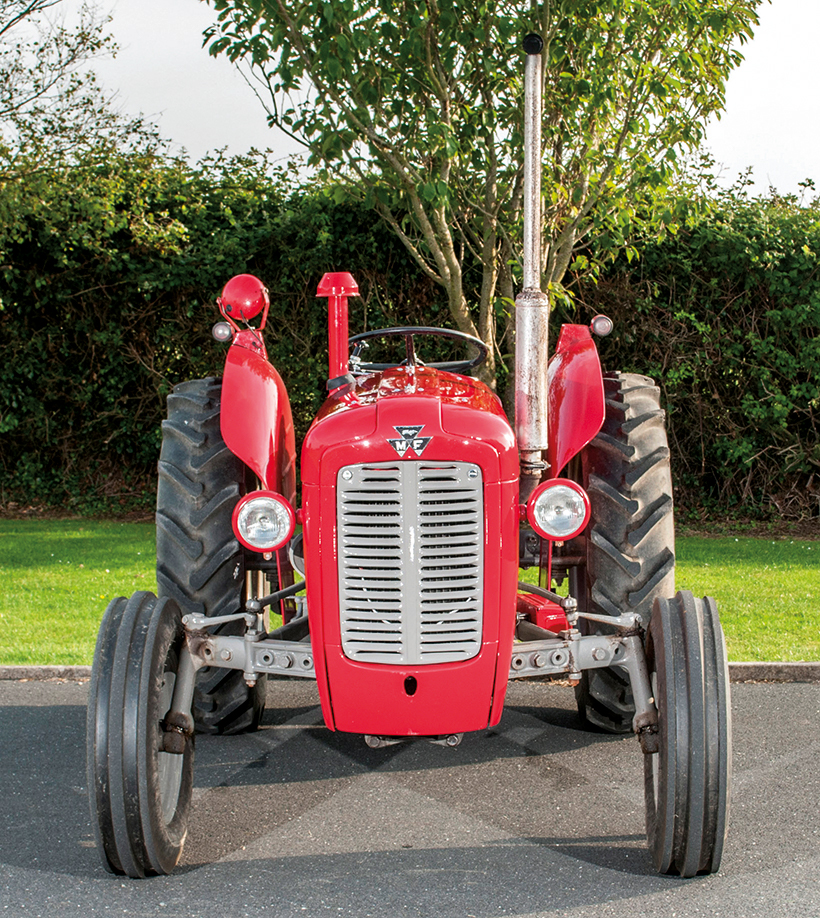 After John’s 950-mile round trip, the 35X was back in England for another chapter in its well-travelled life. For more than a decade it performed light duties but, probably because of hard work during its early years, an extensive, short engine rebuild had become necessary in 2005. Accompanying receipts detail the work, but show no evidence of any work having been done on the cylinder head. In his later years and, with no further need of a tractor, John asked David’s advice about how he should sell his Massey Ferguson without having to deal with tyre-kickers. David offered to simplify the process by buying it himself, and so began another journey across the Irish Sea, this time by commercial haulier. 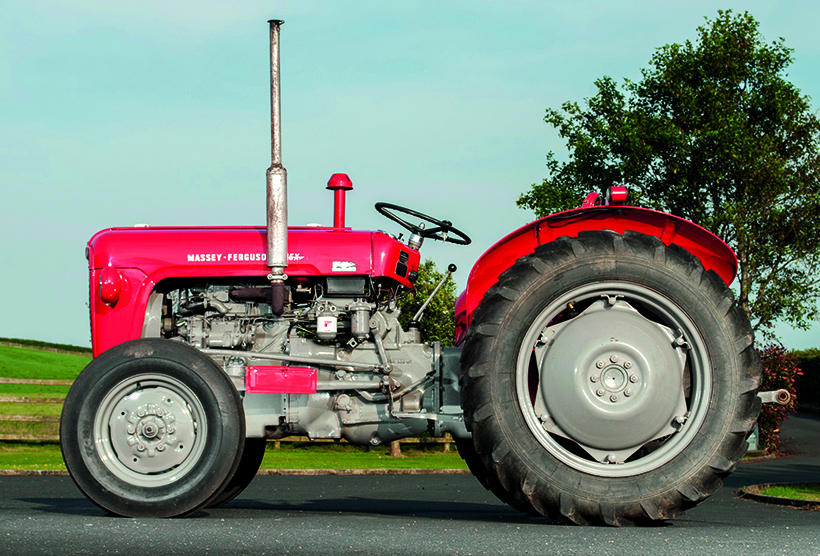 The 35X was brought to Northern Ireland by tractor dealer, GA Allen of Banbridge, Co. Down.

“Since I bought it, I haven’t had to do much work on it,” says David. “John had replaced the mudguards, but the rest of the tinwork was original and starting to look tatty. I’ve replaced the bonnet side panels, the grille and the chin piece, and I’ve fitted a ploughing lamp. It’s a proper Stadium light, but I had to settle for a toggle switch rather than the correct push-button type. When I had everything fitting properly, I had it sprayed and new badges fitted. I’ve ploughed with this tractor as well as using it to cart logs, and do other jobs about the yard. 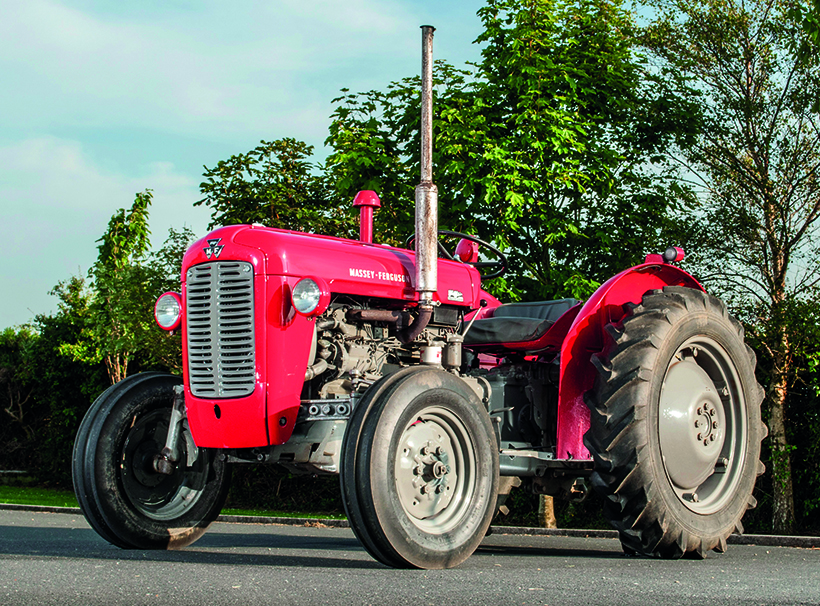 When David bought the 35X, it had only done 174 hours of light work since its engine refurb.

The MF 165
With examples of Banner Lane’s finest from the 1950s and 1960s in his tractor shed, David moved into the next decade for his most recent purchase, a 1971 MF 165, fitted with a Sirocco cab and an MF 40 loader. “In 2016 my friend, James McCormick, rang me. His father had recently died and James had inherited the tractor together with some machinery. He wanted to sell the tractor and asked me to help him value it. 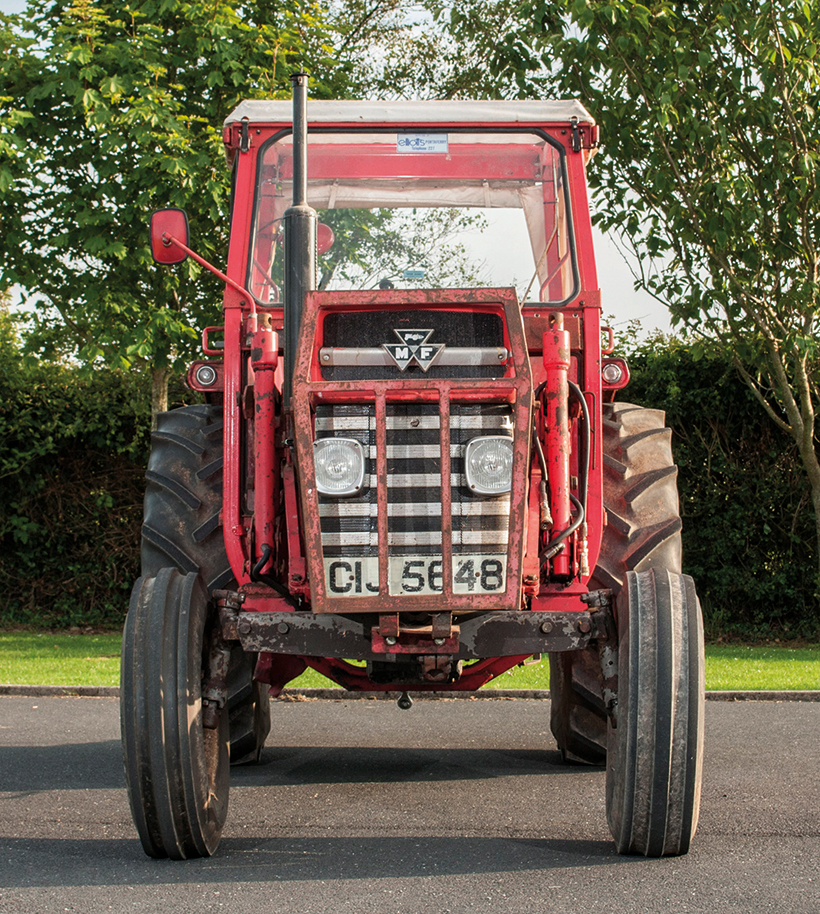 David fitted a grille guard from the correct era to enhance the look of his 165.

“We looked through some price guides and settled on a valuation. I always considered the MF 165 to be an icon of British farming, and I was in a position to buy it, so we did a deal and I’m the third owner. The first was a local farmer called John McCracken, who kept it for about three years before it was sold to James’s father, who then fitted the loader. The date ‘1974’ was scratched on the concrete counterweight when it was cast, which ties-in with what I know of the tractor’s history. 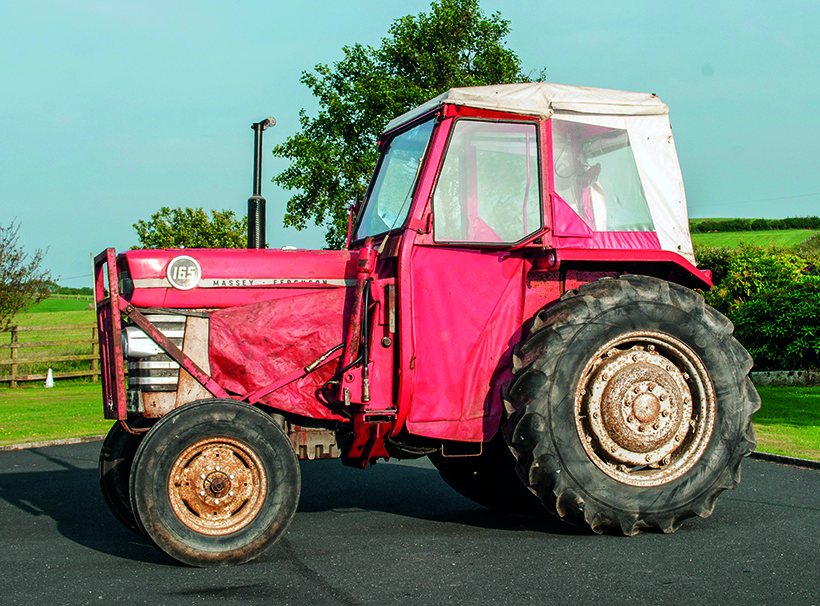 David has bought a JF 80 silage harvester to put on to the 165, for a bit of fun at silage working days.

“I decided to tidy this tractor up mechanically, but keep it in its ‘off farm’ condition, cosmetically. The cab was a bit tired, so I sourced a suitable replacement, which was in keeping with the general condition of the tractor. It needed a new radiator and core plugs and, when I had that work sorted, I used it for a while on the log-splitter and for some trailer work. The pivot pin in the front axle was seized, so I pushed it out with a 40-ton press. I replaced the pin and the bushings, and fitted new king pin bushes and track rod ends. 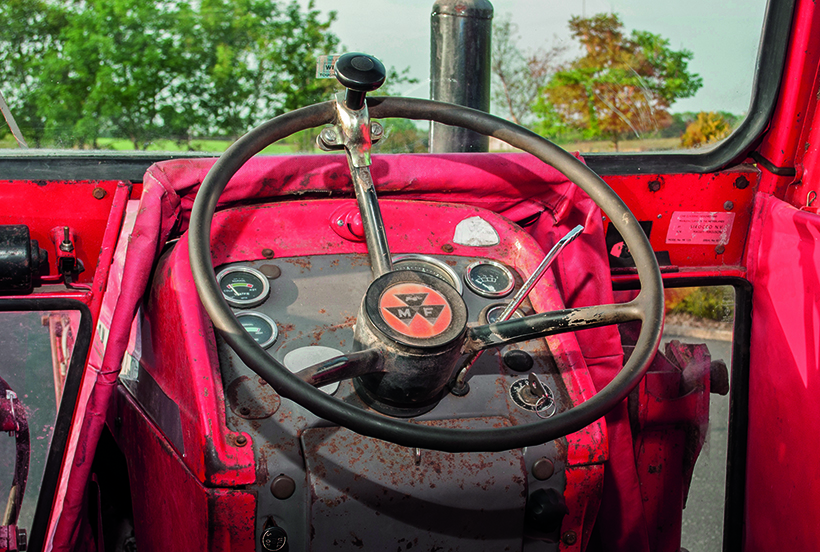 “There was an oil leak at the front of the engine, so I fitted a new seal in the timing case, along with a new gasket. I fitted another grille and replaced the lights but, other than that, it’s pretty much how I wa nt it. It still has the original Wingard mirror, and I’ve sorted out some wiring problems so the wiper works. I’m really pleased to have the roll-up rear cab screen, and I even managed to source the correct dealer sticker for the window. 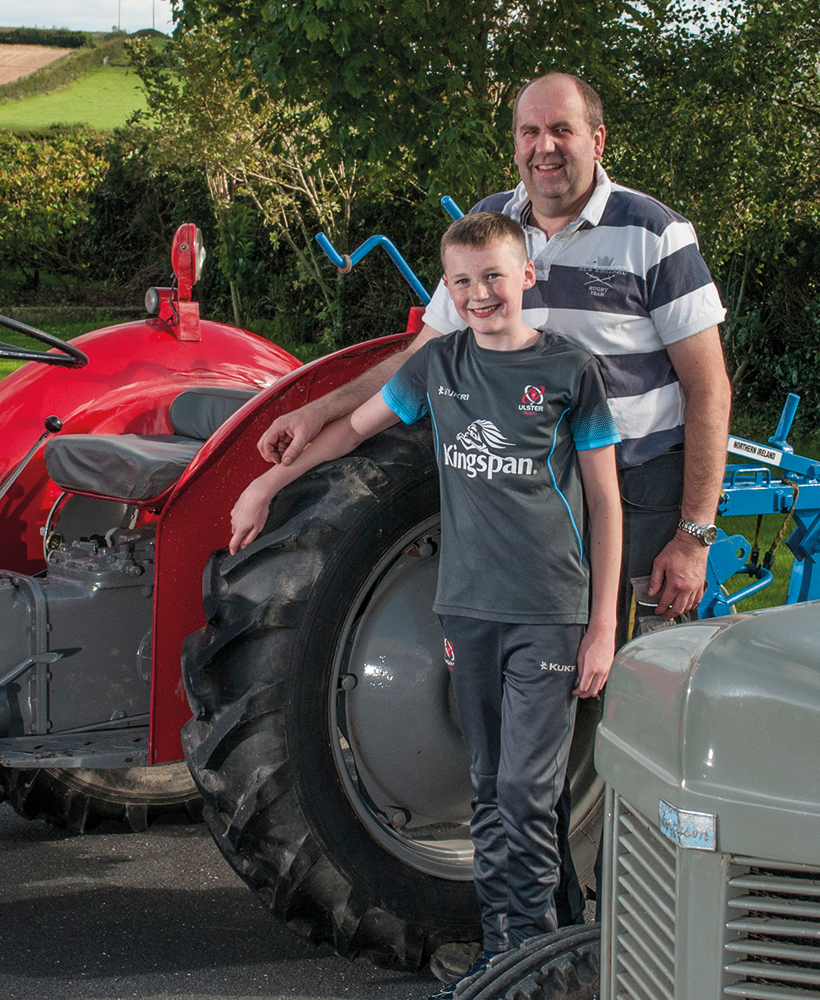 Young Andrew is already developing his skills at the Ploughing Academy, and uses the 35X and Ransomes plough.

David is proud of this collection, which charts the progression from Ferguson to Massey Ferguson. Each tractor has its own, unique history, and the fact that all his tractors have a strong, local Co. Down connection, makes them that bit more special. As a young man, he was encouraged to look for a relaxing hobby. Sound advice indeed. 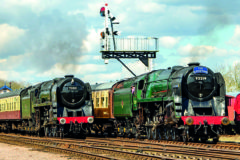 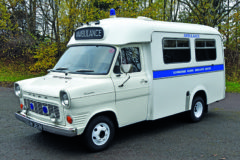