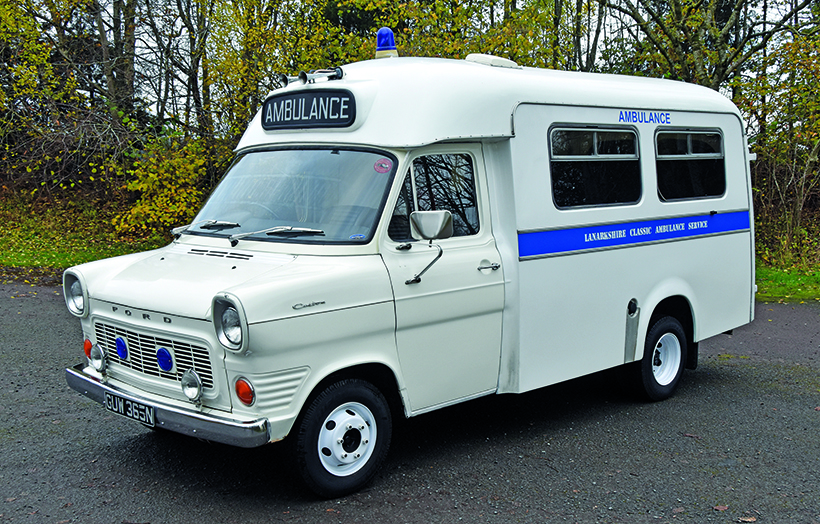 Kenny Moffat’s rare, 1974 Transit ambulance is fitted with a specialist Wadham Stringer body made from glassfibre.

Kenny Moffat is an ambulance paramedic/technician with the Scottish Ambulance Service, and who also owns this fine, 1974 Ford Transit ambulance. He grew up in the area, and spent some of his childhood years involved with the Summerlee Heritage Centre, in Coatbridge.

“The Centre is one of the most important industrial heritage sites in Scotland,” he explained. “I used to live close to the museum, and was a member of the ‘Friends of Summerlee’. The ‘Friends’ is a voluntary organisation that supports the activities of the museum. I spent some of my teenage years restoring and driving its collection of steam engines, and even passed my class G license. We used to show the engines at events like local gala days. They were very popular with members of the public, and it was great fun taking part.”

Evidently, Kenny enjoyed his time with ‘The Friends of Summerlee’, and it also whetted his appetite for classic vehicles.

Ambulance service
“When I left school, I joined the army and spent several years with the Scot’s Guards. I spent most of my service career with the first battalion on ceremonial duties in London. I then joined the ambulance service, and have been with it ever since. I’ve always been interested in old ambulances.”

Kenny has been interested in light commercials for many years and has owned several classic vehicles. “My first commercial was a 1955 Austin A30 pick-up,” he recalls. “I eventually moved the vehicle on, and acquired a 1935 Austin 12/4 Ascot. I then bought a pre-WW2 1933 Morris Minor, followed by a 1959 four-door A35. I acquired the Ford Transit ambulance in 2019.” 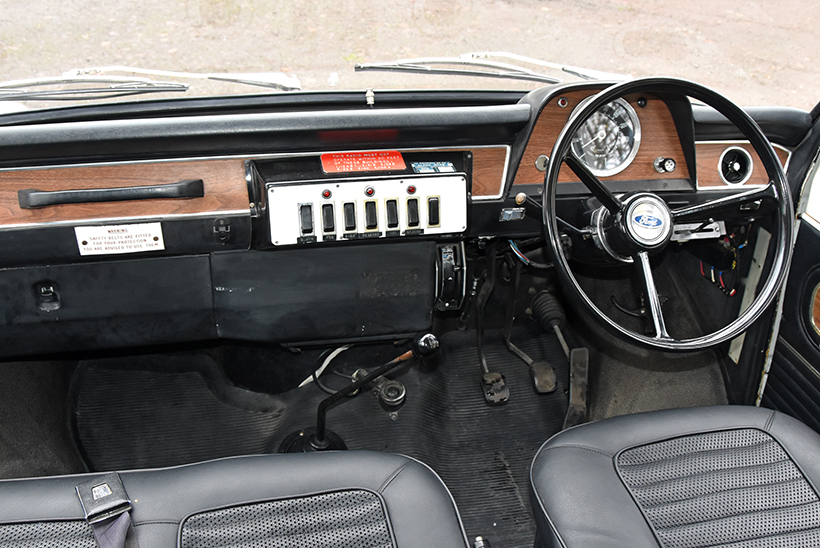 Modern and user-friendly cab layout was a key Transit selling-point.

This vehicle – GUW 365N – was new to the Ministry of Defence, and was based at Puriton, in Somerset. The chassis was built in 1974, and the body the following year, when the vehicle was registered.

“The ambulance served its time at the Royal Ordnance Factory,” Kenny explained. “Although it didn’t see a lot of work there, it was always on standby. The Transit was driven regularly by the site’s fire officer, and there was a doctor and nurse on hand in case of an emergency.”

Emergency appliances that were based on one particular site, generally have low mileages, and GUW 365N is no exception.

Very low mileage
“Most of the vehicle’s mileage would have been run up on training exercises,” Kenny explained. “When the Transit was finally stood-down and sent for auction in 2002, the Ford was only showing 10,200 on the clock. The ambulance was then acquired by a company specialising in providing classic vehicles for television programmes.

“Consequently, its TV CV includes appearances in The Bank Job, with Jason Statham, the 1960s period drama Heartbeat, Inspector George Gently, and The Royal, a British period medical drama. The film company kept the Transit for a few years, before moving it on in 2007.”

Fitting-out emergency appliances was also a specialist task, and GUW 365N was supplied by Wadham Stringer, a company based at Waterlooville, in Hampshire. It was formed in 1968, following the merger of Wadham and Stringer Motors. 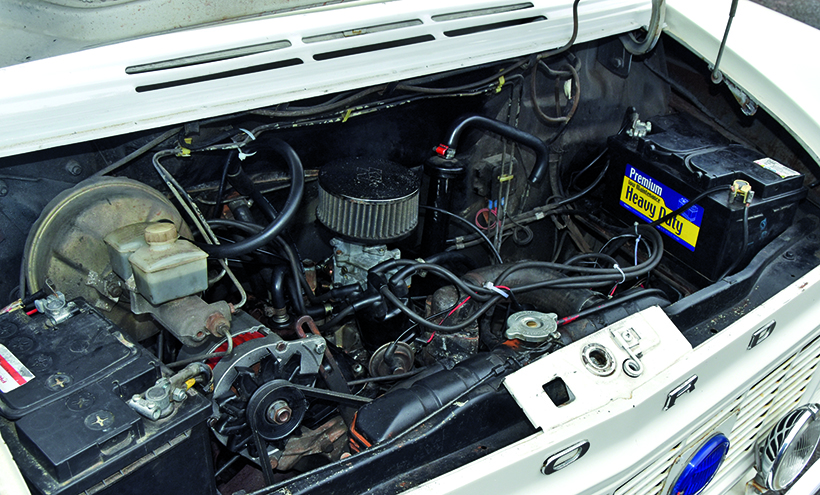 The vehicle is powered by the two-litre V4 engine, which was the standard petrol offering from Ford. Some emergency vehicles actually came with a V6 three-litre unit.

Wadham was an old, established company that was founded at Waterlooville in 1905. By the 1960s, it had expanded into vehicle distribution, engineering and coach building, and employed a workforce of 1,000 people. The company also turned its hand to chassis conversions, and these included ambulances based on the Morris FG and LD chassis.

Stringer Motors had been started in the Wiltshire town of Melksham, in 1942, as a distributor of Austin cars and commercial vehicles. It was a family-run business and, by the mid-1960s, was looking to increase its number of distribution outlets. The merger with Wadham was a logical step, and created one of the top specialist chassis companies in the field.

Wadham Stringer changes
The 1970s was a period of change and rationalisation in the motor industry and, in December 1979, Wadham Stringer was taken over by Tozer, Kemsley & Milbourn (Holdings) Ltd, or TKM. However, the decision was taken to retain the ‘Wadham Stringer’ name, due to its good industry reputation. By this stage, Wadham Stringer was also handling agricultural equipment and machinery, although it was still fitting-out ambulances to order as late as the mid-1980s.

By 1987, part of TKM’s core business was car retail, and it combined Wadham Stringer with some Kenning franchises, to form Wadham Kenning. The company was eventually acquired by the Inchcape Group, and the Wadham Kenning name was phased out in 2001.

“I spotted the Transit on an internet site,” Kenny recalls. “The then owner was Ian Davison from Sunderland, although I believe the Ford had also spent time with enthusiast Ronne Black, at Alnwick. By that stage, the ambulance had run up 13,000 miles.”

“I drove down to England and met up with Ian a couple of times at a café on the A66. I had a good look at the ambulance, and discovered that it was in reasonable condition, given its age. But I noticed that the body needed a spot of welding, particularly to the upper panel in the windscreen; it had rotted through, and you could actually see daylight! So I decided to go ahead and buy the ambulance, and we were able to come to an arrangement.” 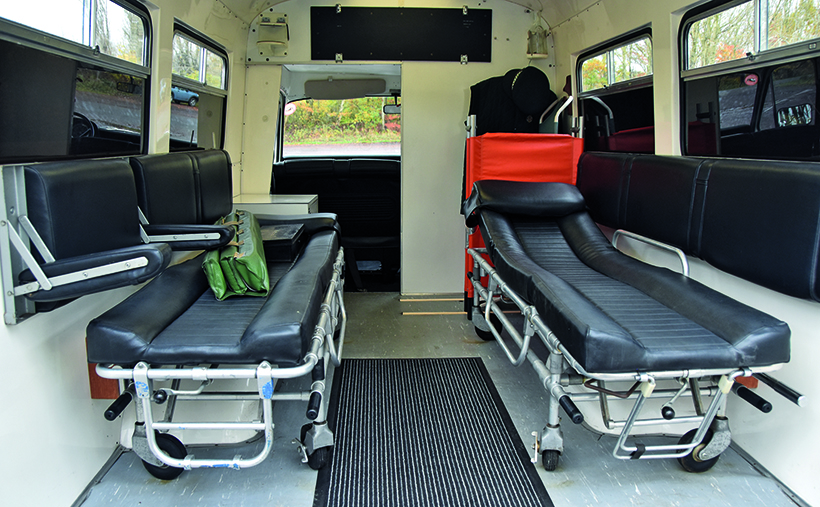 There’s lots of period equipment inside, collected by previous owners and Kenny.

Ford Transit history
The history of the Transit Mk1 is well known to most enthusiasts; the model was the top light commercial of its generation. The first vehicles were built in the summer of 1965, at the company’s factory in Langley, near Slough. The first model was a short-wheelbase, petrol van with a 610kg payload.

The keys to the Transit’s success were its broad track and large number of different body styles. These included long and short wheelbase panel vans, a pick-up truck, minibuses and crew-cabs. The most expensive model was a 15-seat custom bus.

The new model was an instant success, and had the longest production run of any subsequent Transit. The Mk1 was available in the UK with the Ford Essex 1.7-litre or two-litre V4 engines. The Perkins 4-108 diesel unit was also an economical if sluggish alternative. Later types featured Ford’s in-house 2.5-litre York diesel instead.

“The Transit was highly adaptable, so could be used for a wide variety of tasks,” said Kenny. “That’s what made it so popular. The surviving Mk1s are sought-after by enthusiasts, although the vehicles often have condition issues, particularly concerning the bodywork.

The Wadham Stringer ambulance body was made from glassfibre in three sections. The bodies were still prone to wear and tear but, according to Kenny, the light at the front of GUW 3565N had been leaking water for some time. This had inevitably caused some damage, and was at the top of Kenny’s ‘things to do’ list. 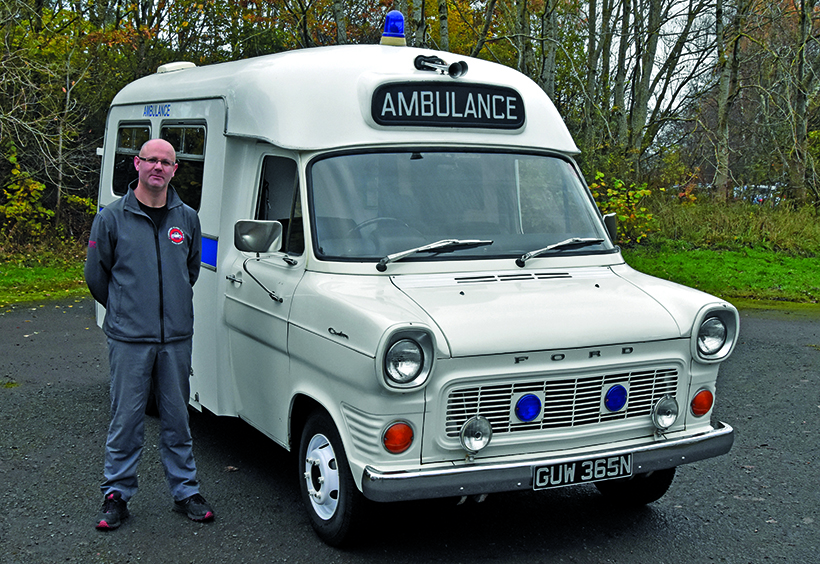 Welded repairs
“In the end, I had to arrange to have the windscreen taken out so that we could do the welding,” he said. “Although I’m fairly handy with tools, I paid to have this work done by a local enthusiast. Fortunately, the vehicle was always kept under cover all of its life, so there’s never been a serious rust issue. I’ve had the Transit up on jacks and can vouch for the fact that it’s solid underneath.”

Kenny recalls there were several other items that needed some attention. “I had to renew the front springs, and fit a stainless-steel exhaust,” he explained. “The wheels have all been powder-coated, and I’ve fitted a new set of tyres. The engine has been overhauled, and the seats have been upholstered. I’m always conscious of the need to maintain a vehicle’s authenticity, so was careful to make sure that the covers were contemporary to the period. The work took several weeks and cost me about £3,000.

“The vehicle’s specification includes an Essex V4, two-litre engine linked to a four-speed gearbox. I’ve driven it a few times, and the Ford is currently showing 21,000 miles on the clock. The ambulance is straightforward to drive, and the two-litre engine means it can keep up with the traffic. That said, I tend to avoid motorways!”

Emergency vehicles are usually relieved of all their accessories and equipment before being sent to auction. This used to result in endless trips to autojumbles to source the missing parts. Fortunately, the arrival of the internet has improved the availability, although it can still involve a lot of hours spent trawling through the specialist websites.

Period accessories
“Fortunately, the television prop company had restored some of the accessories,” said Kenny. “When I acquired the Ford it even had the Heartbeat (North Riding Ambulance Service) writing still on the side.

“I’ve also added a few bits and pieces, including a new ‘period’ first aid kit, a box splint, spinal board and chair. Of course, a 1970’s ambulance would only have had a fraction of the equipment that’s regularly used on the modern equivalent, as paramedics were only introduced in the late 1980s. Ambulances from the Transit’s era were only designed to take the patient, or casualty, to hospital. That was the stretcher bearer’s job, and they were only given a minimum of training. The Transit ambulance was capable of carrying up to 10 people, and the other passengers would have probably been family members.”

Although Kenny’s wife is a bit lukewarm about his classics hobby, his teenage son is a big fan. “Ross will be 16 next year, and he’s very keen for me to hang on to the ambulance,” said Kenny, who is also the driving-force behind Lanarkshire Classic Car Club. Kenny started the club two years ago, and it’s already attracted a healthy number of members.”

“We don’t charge a membership fee, and try and raise as much money as possible for the Children’s Hospices Across Scotland (CHAS),” he explained. “Things have obviously been a bit difficult with the current situation but, hopefully, things will return close to normal in 2021.

“Ross also lends a hand with the vehicle’s servicing and maintenance, which is a big help. As for the future, I fancy taking the Transit on the North Coast 500 route sometime in 2021. For the uninitiated, this is a 516-mile tour around the north-west of Scotland, starting and ending at Inverness Castle. The route has become very popular in recent years and, apart from seeing some stunning scenery, it would be nice to put the Transit through its paces.” 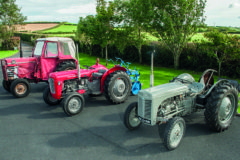