Jeremy Rowland enjoys a trip to see the superb results of an exacting and expert, ‘nut and bolt’ Hy-Mac 480 excavator restoration. 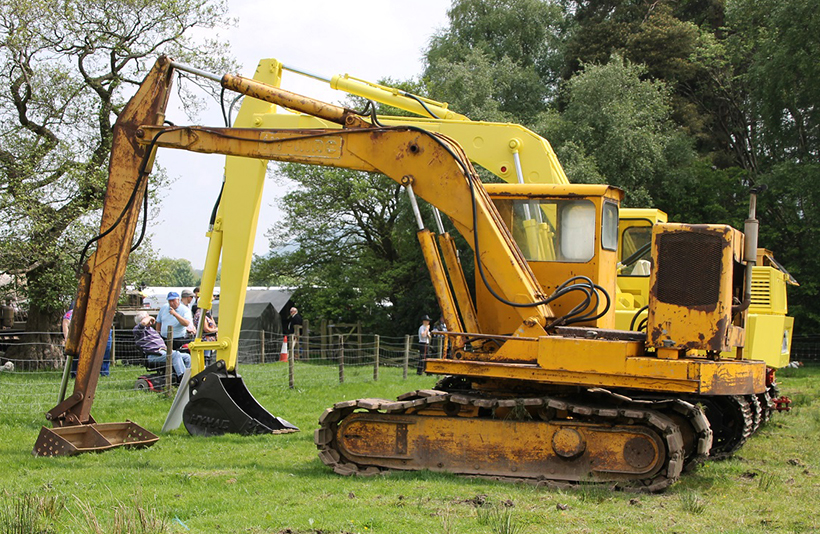 The Hy-Mac 480 was the first excavator model that was manufactured by the Rhymney Engineering Company in South Wales, and sold and distributed by Peter Hamilton Equipment Ltd. The machine was based on an American Hy-Hoe design, and was the first all-hydraulic excavator to be manufactured in Great Britain.

Tony Flint has just completed a full ‘nut and bolt’ restoration of one of these pioneer Hy-Mac models, and I went along to see it; the machine in question carries the serial number H4810159, which links it to a purchase date of March 9th, 1963. It was delivered to Scottish Land’s depot in Newcastle.

Unrestored debut
It was advertised for sale in Classic Plant & Machinery magazine some years ago, but was finally purchased at a Cheffins auction in April 2016, by Clive Hurt. It then made its unrestored debut at the Chipping Steam Fair later that year, after which it was taken to Tony Flint for full restoration. 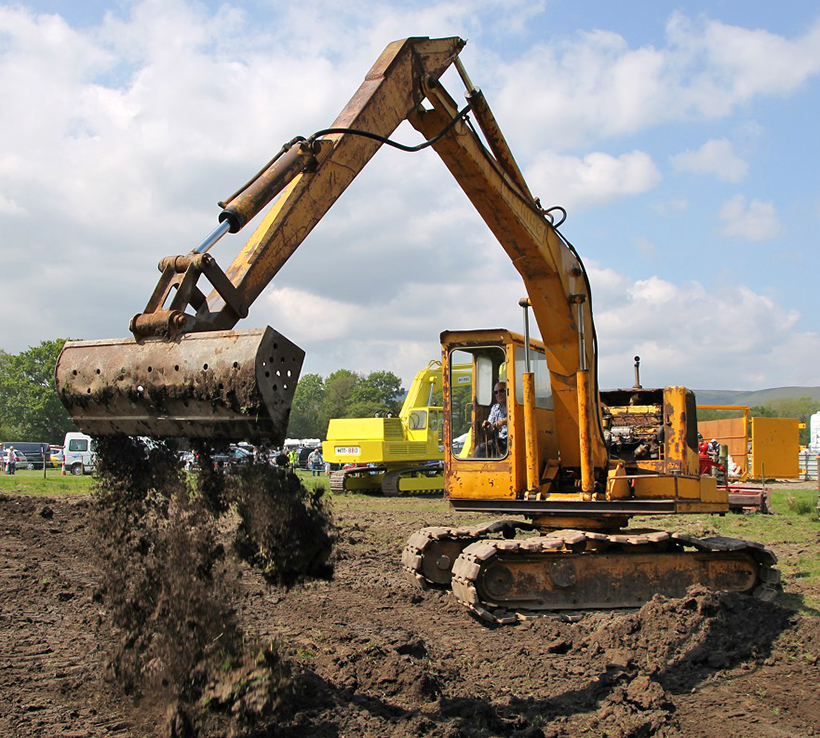 Clive at the controls; if you look beneath the cab and boom hoist rams, you can see the welded channel that was added by a previous owner to strengthen the machine after it ‘broke its back’. (Photo: Jeremy Rowland)

Machinery restorations of any kind aren’t simple jobs, and this one presented more than its fair share of problems. However, before the restoration even started, one of the track drives failed, which turned out to be due to a broken drive chain. But, already spotted by Tony at the 2016 Chipping event, was a far more serious issue with the excavator.

Steel channel had been welded around the front and both sides of the machine, indicating that at some time in the past the upper frame had ‘broken its back’ – something that would cause far more issues during the restoration. Another visible defect was the cracked dipper arm but, with those two exceptions, the machine was a viable candidate for restoration. 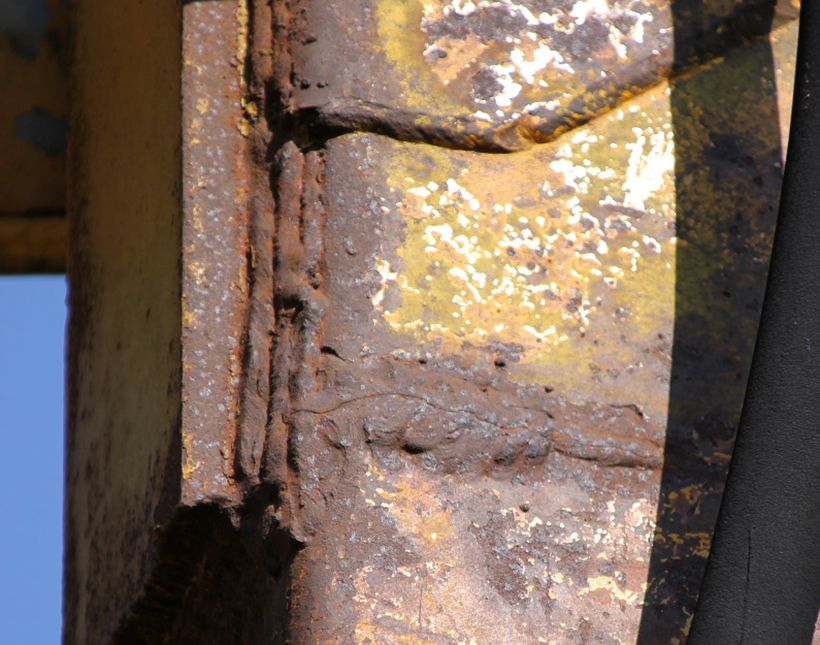 You can clearly see the crack in the dipper arm in this photo; the plate to the left is non-standard, and was fitted by a previous owner. (Photo: Jeremy Rowland)

As with previous, full restoration jobs, the excavator was totally stripped down so that the really hard work could begin. All the hydraulic components were fully refurbished, including the triple, in-line gear pump, spool valves, rams and track drive motors. The brakes used on the Hy-Mac 480 aren’t automatic brakes like the ones fitted to the later machines.

In this case, after a full investigation, it was discovered from a Girling brake specialist, that the brake cylinders (including the master cylinder), were the same as those fitted to Jaguar cars of the period. The brakes are operated by pumping the brake pedal then, once applied, turning a gate valve to keep the pressure in the system and hold the brakes on; the brakes are simply released by unscrewing the gate valve. 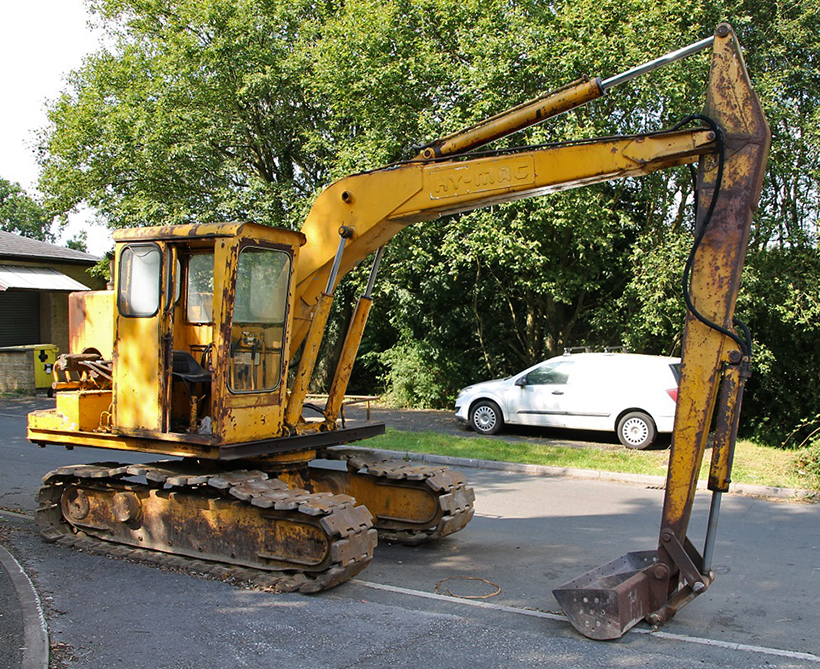 ‘Broken back’ fracture
The excavator’s upper frame was stripped, which revealed the true extent of the ‘broken back’ fracture. She was in a very bad condition. All the previous attempted repairs had to be removed first, after which the frame was sent away for specialist welding. While this was happening, attention turned to the undercarriage. The drive systems and rollers – along with the idler wheel – were all refurbished, with new bearings and bushes being fitted.

The Hy-Mac 480, like all early Hy-Mac tracked machines, was fitted with a cast navvy pad-type undercarriage, similar to those fitted to track-driven cranes of the same era. However, the problem is that, on this type of undercarriage, the pads tend to wear where they are linked together, which was the case in this instance. All the pads were bushed and had new pins fitted, then the first real problem arose, because a previous owner had removed two old track links from each track to compensate for the wear (which had now been rectified), so the tracks were two pads short on each side. 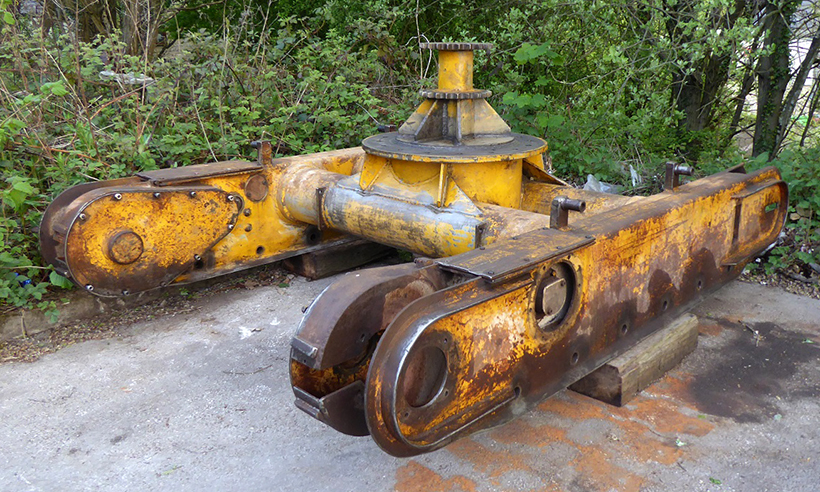 The stripped undercarriage outside the unit awaits further attention, before being sent for blasting and painting. The two, large sprockets at the centre of the unit are connected to the slew rams. (Photo: Jeremy Rowland)

Naturally, you can’t purchase new track pads off-the-shelf nowadays, and finding good, used ones is nigh-on impossible. So, the only answer was to have four new pads manufactured. These were made from solid steel and machined out; I must say that they are first class, and you’d struggle to spot the new replacements from the originals. 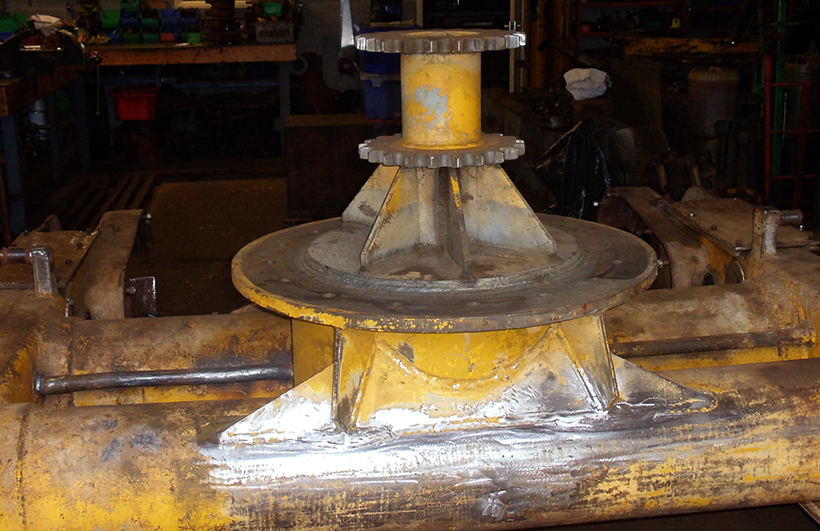 It’s critical to check the undercarriage for cracks before blasting and painting begins. (Photo: Tony Flint)

The dipper arm, which had cracked quite badly, was also sent out for repair; once again, a bodged repair by a former owner had to be removed, at which point the true extent of the damage became evident, then the repair could be made. Once the repaired upper frame returned, the restoration took a turn for the worse, as it was discovered that the frame damage had caused diesel to leak into the main, hydraulic oil reservoir. This proved to be a trying time for Tony and Strutt Engineering, who carried out the welding work on the excavator; the issue with the leaking tank cost much time and effort to finally sort out. 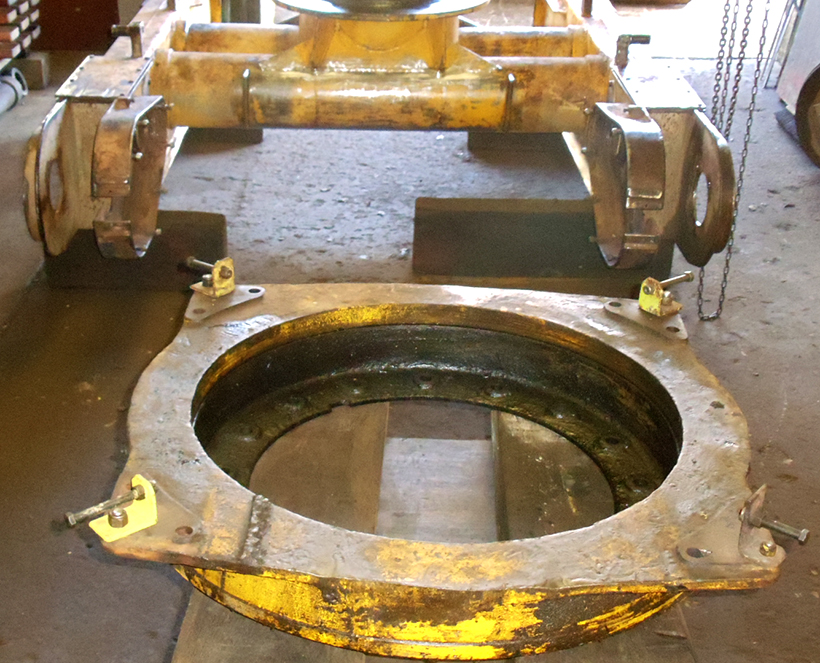 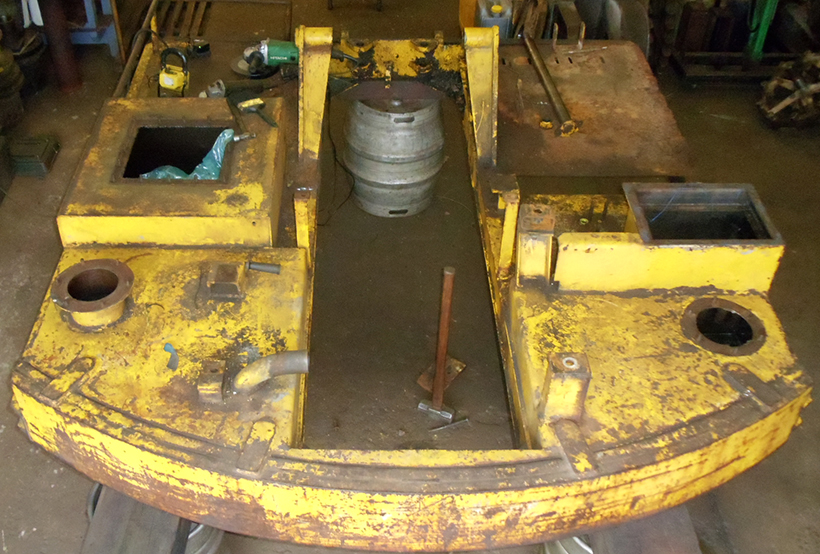 Looking down on the top of the upper works; note the simple counterweight consists of two steel ring sections welded on to the machine’s superstructure. (Photo: Tony Flint) 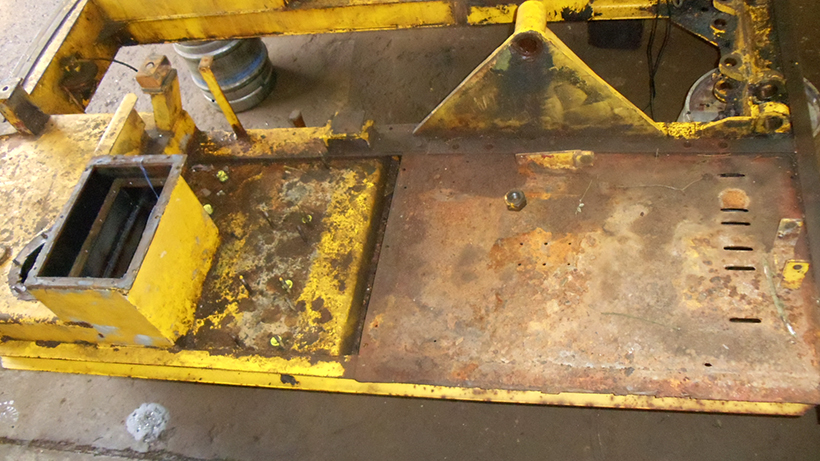 This time looking at the right-hand side of the upper frame. Note the rusty cab floor plate, which was replaced. The slots are for the control levers – they are simple ‘push/pull’ types. (Photo: Tony Flint) 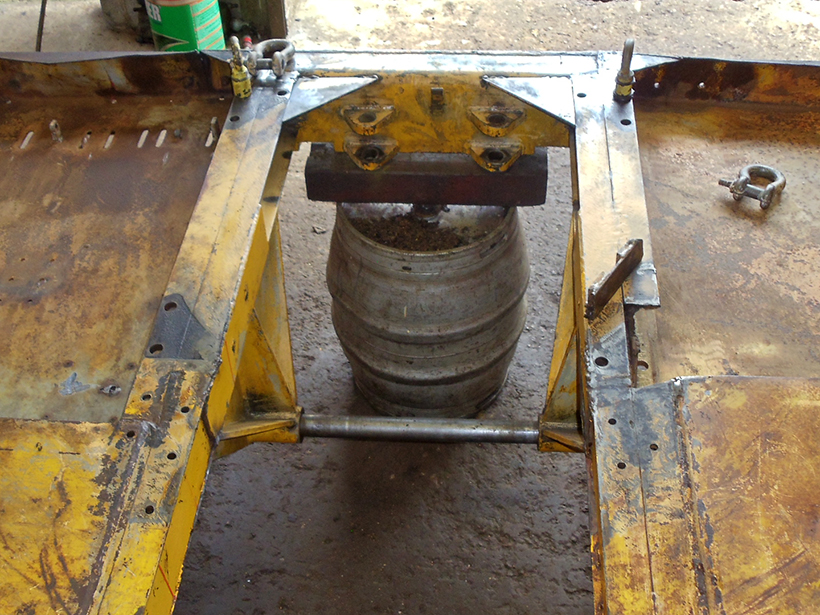 With the frame turned upside-down, the severity of the broken frame became much more apparent. (Photo: Tony Flint) 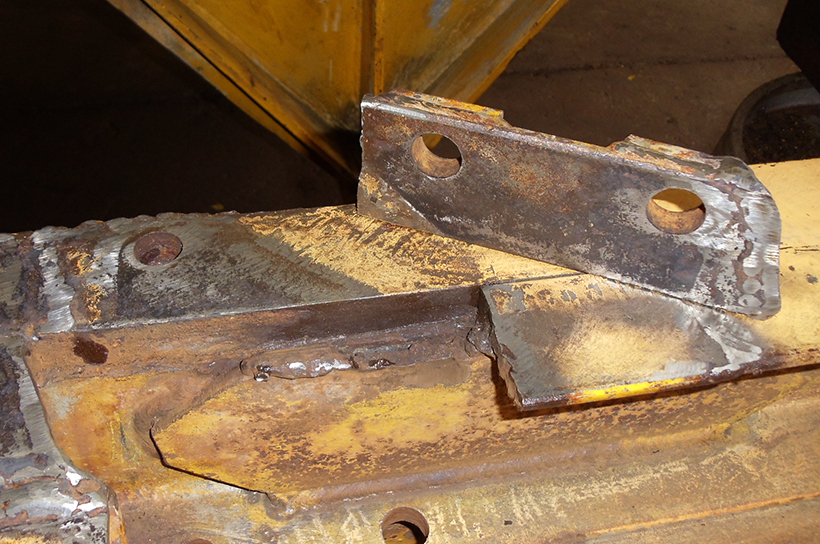 A close-up of part of the cracking damage to the frame. (Photo: Tony Flint) 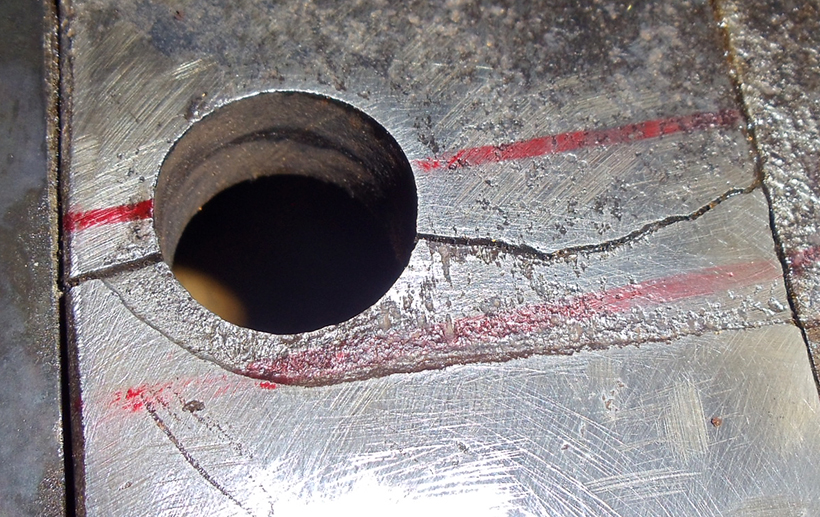 Another close-up photo showing cracking damage to the frame. This digger had suffered a very serious failure at some point in its life. (Photo: Tony Flint) 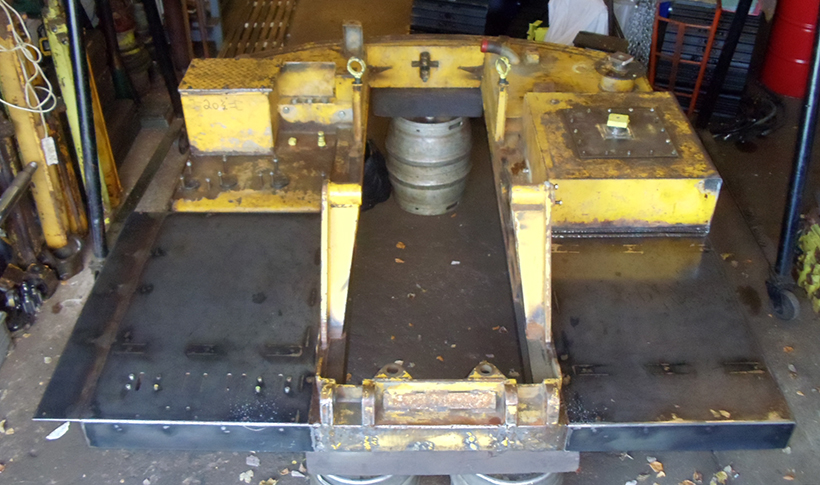 The repaired, upper frame back ready for rebuilding. But work ground to a halt soon after this due to the problems caused by diesel leaking into the hydraulic oil tank. (Photo: Tony Flint) 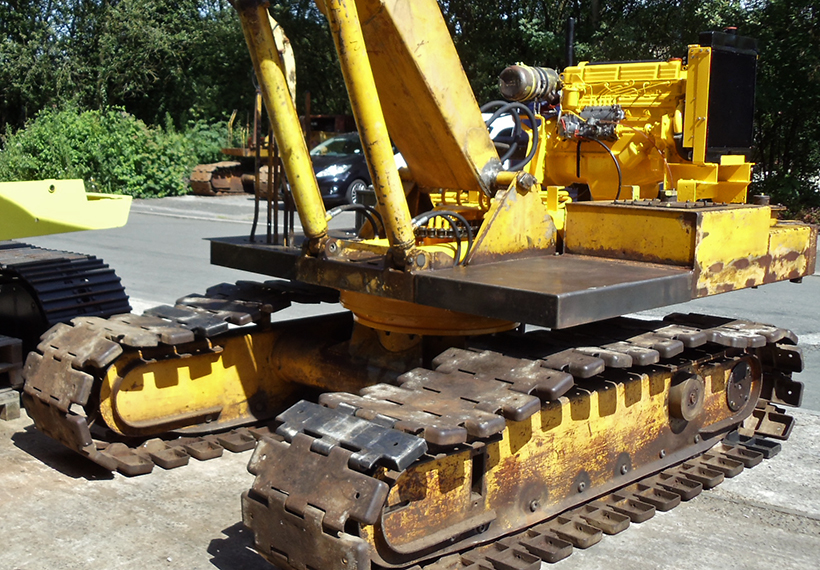 Getting there, at last! The partially-assembled 480 is slowly coming together. If you look carefully, you can spot three of the newly-made track links – they are a deeper grey colour. (Photo: Tony Flint) 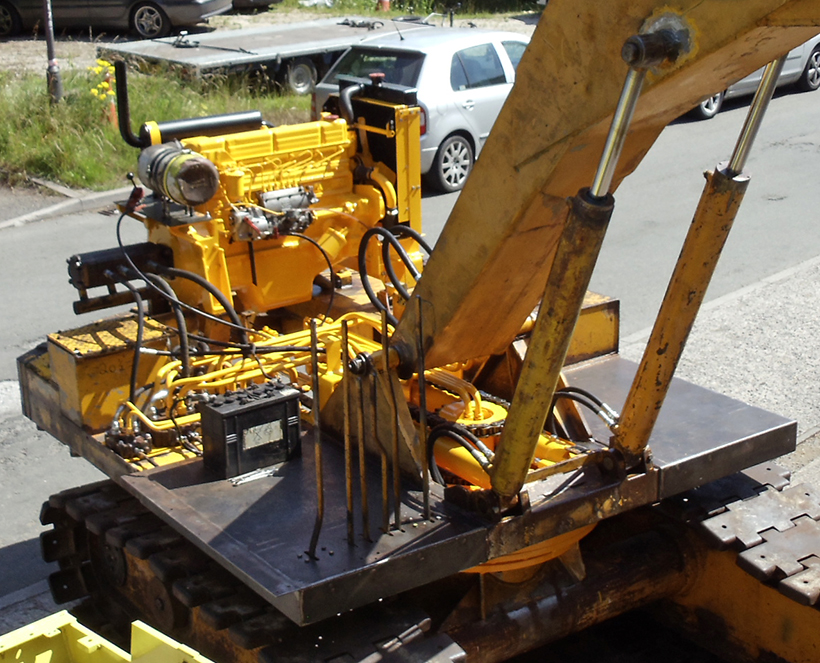 This offside view of the machine shows the progress. Note the temporary, 580C air-filter (this was changed to the correct oil bath-type), and the temporary throttle lever behind it. (Photo: Tony Flint) 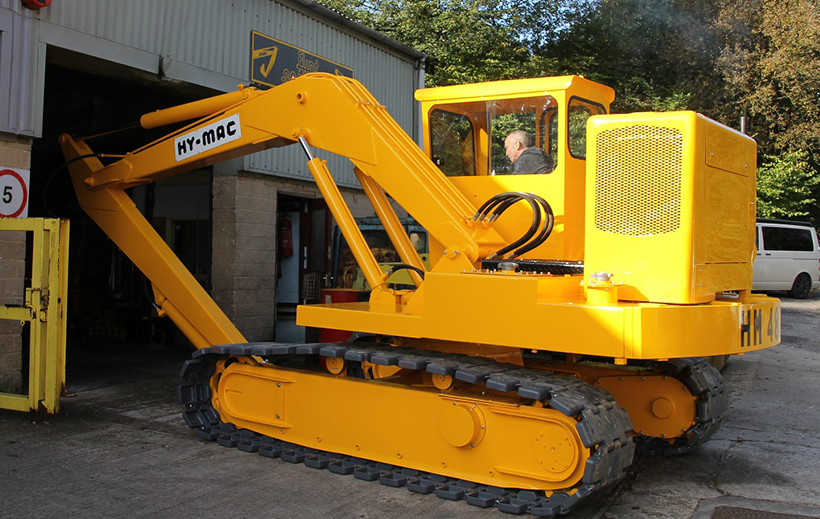 What an amazing transformation! Tony reverses the machine out of his unit, and it looks fantastic. (Photo: Jeremy Rowland)

Finishing touches
The engine bonnet covers received lots of attention, with new panels being fabricated and nicely finished with the chrome ‘tee’ key covers. The excavator benefited from all new hydraulic hoses, including some of the steel pipes, and the electrical system received a new wiring loom.

The Hy-Mac 480 isn’t a full 360° slew machine, but slew is accomplished via two hydraulic rams that pull the upper works around via two chains and sprockets – the chains were renewed and the two rams rebuilt. The cab had to have a new floor welded in – fully expected on a machine of this age – although the original cab glass was retained. The excavator was finished with a high-quality paint job in the early yellow livery that was seen on the first Hy-Mac excavators. I’m sure you’ll agree that this is a first-class restoration. 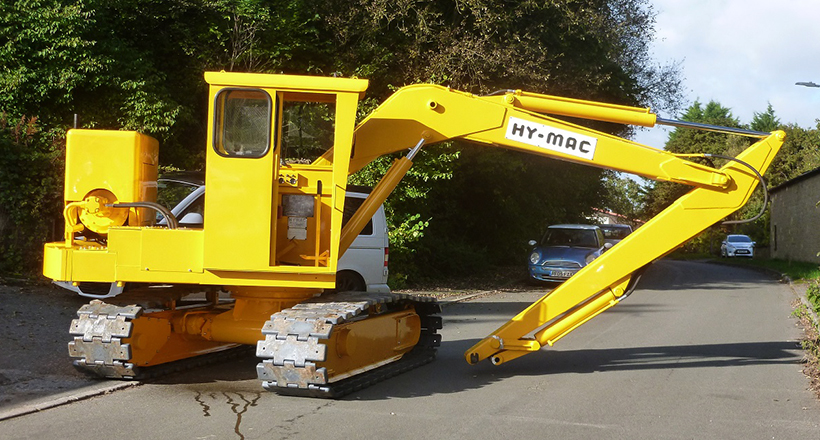 The Hy-Mac gleams in the autumn sunshine looking like she’s just rolled off the Rhymney production line. You can see the effort that was put into the restoration from this angle; new spool valve covers were also fabricated. (Photo: Jeremy Rowland) 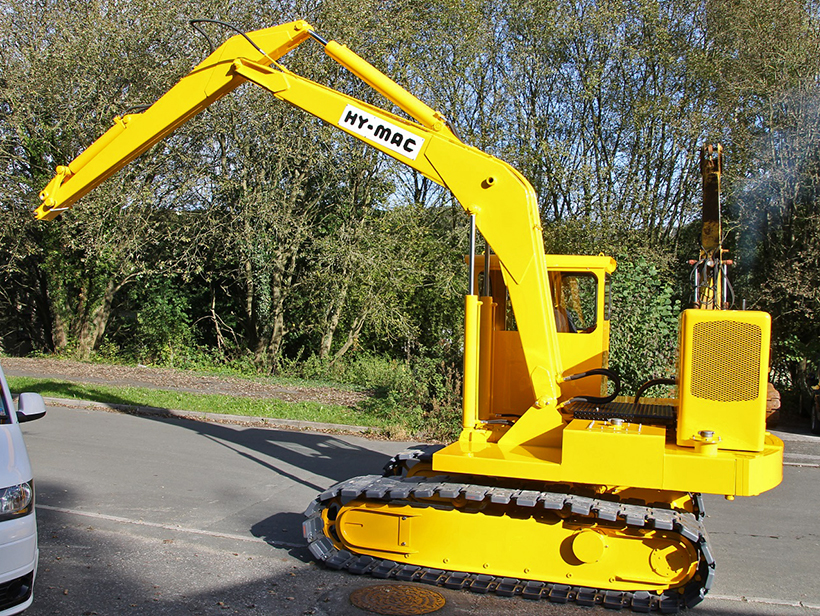 While the Hy-Mac 480 may look dated when compared to new machines it was, in its day, cutting-edge technology that would oust many cable-operated machines. (Photo: Jeremy Rowland) 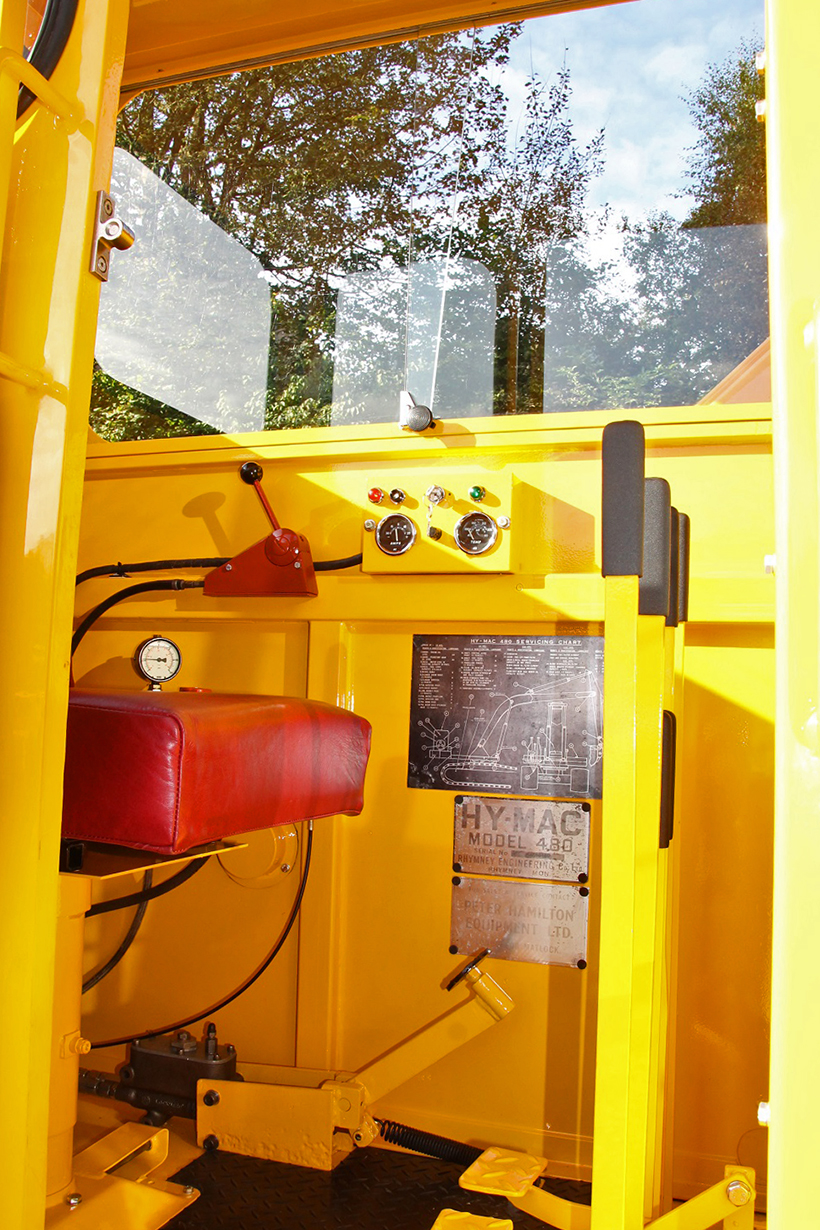 Inside the cab. The pedal on the far side is for the brake – you pump up the pressure by foot (registered on the gauge) then close the gate valve next to it to hold the brakes on. (Photo: Jeremy Rowland) 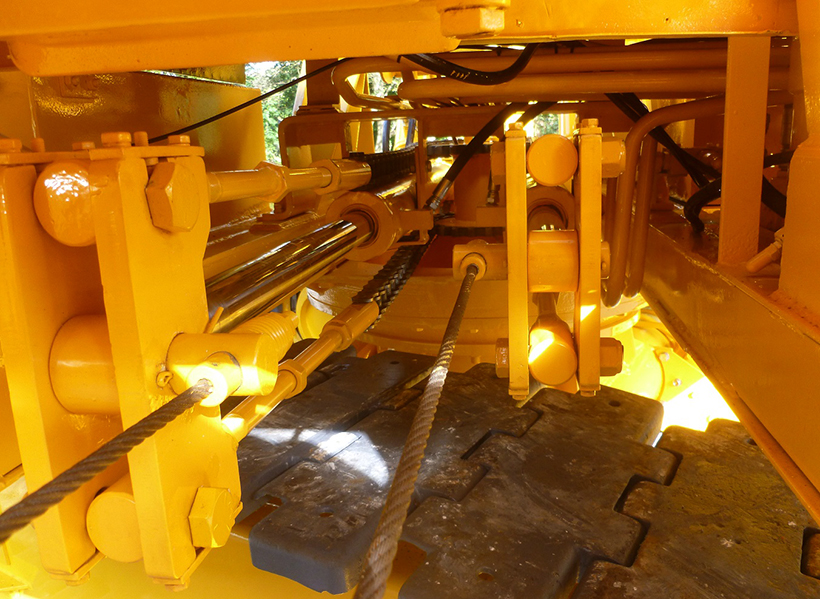 This is the machine’s slew mechanism. Two hydraulic rams pull chains to rotate the unit. The steel wire is an additional support for the rear of the rams; it runs through a pulley bolted to the back of the superstructure. (Photo: Jeremy Rowland) 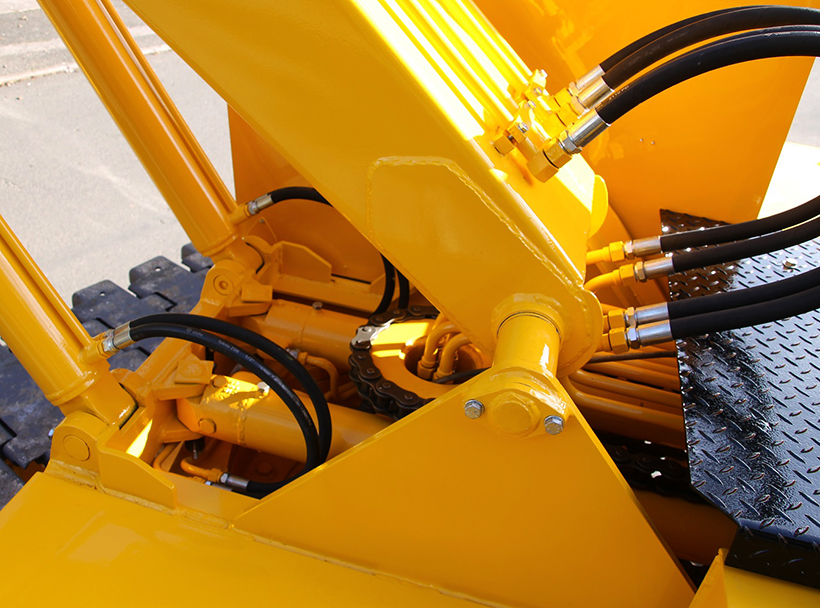 The quality of workmanship speaks for itself in this photo of the boom mounting; you can see the top slew chain and the slew cylinders mounted beneath it. (Photo: Jeremy Rowland) 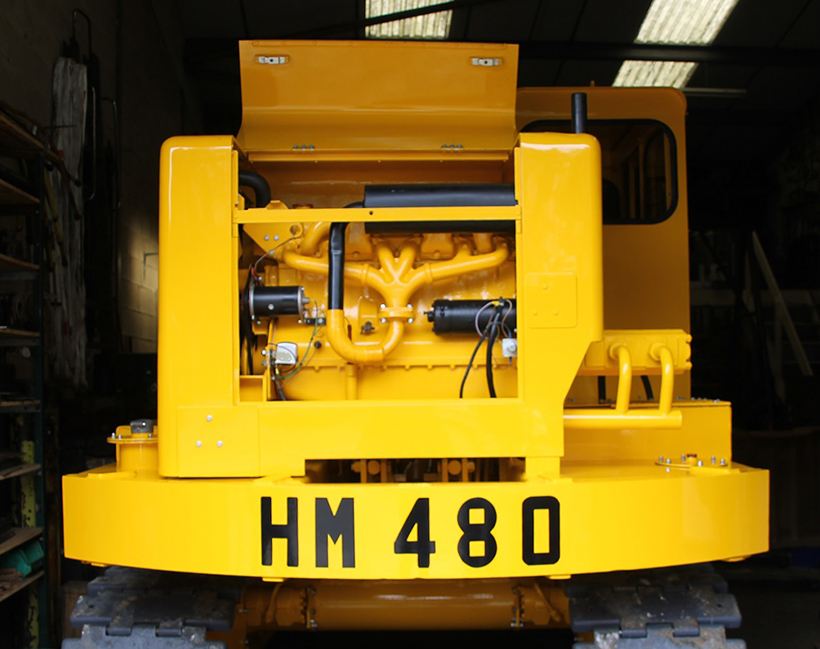 The rear engine cover open to reveal access to the Ford power unit. Once again, all is like new as you would expect. (Photo: Jeremy Rowland) 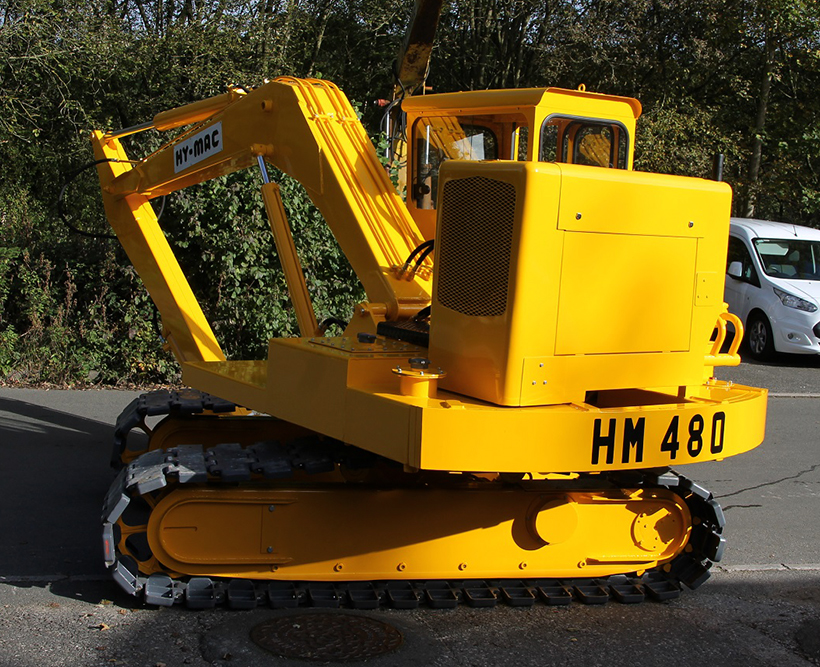 A nice, three-quarter rear view of the digger; the track adjusters on the 480 are behind the small plate above the first bottom roller. These are not grease pistons but a simple, threaded bar. (Photo: Jeremy Rowland) 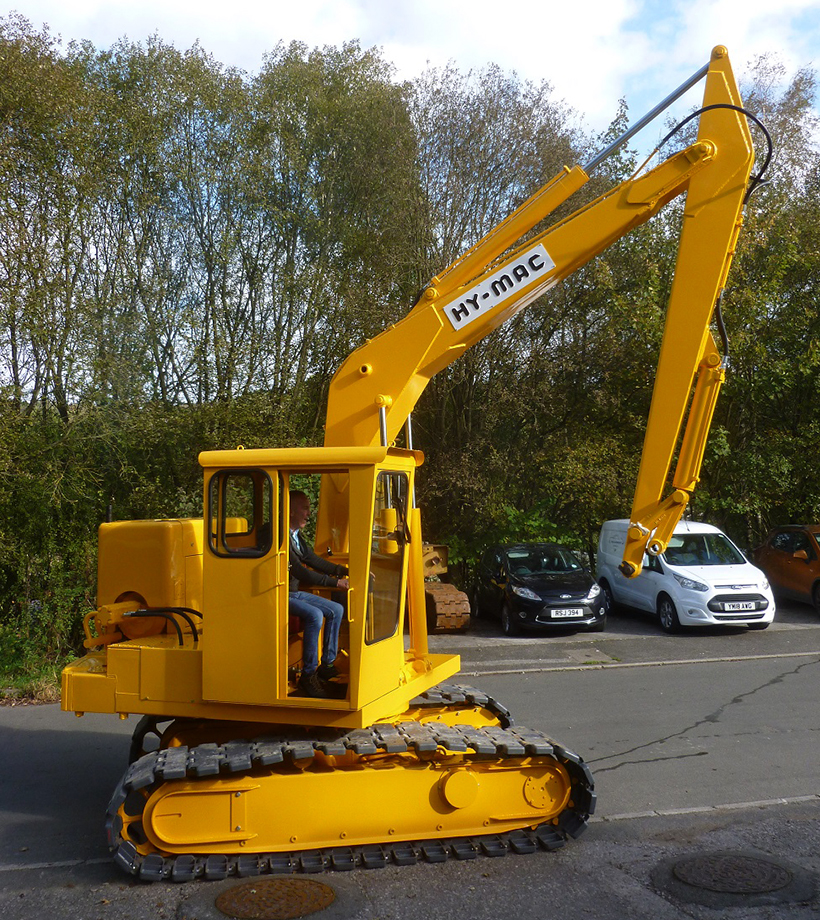 Tony Flint at the controls of the beautifully-restored Hy-Mac 480. (Photo: Jeremy Rowland)

For a money-saving subscription to any of Kelsey Publishing’s transport-related magazines, simply click here 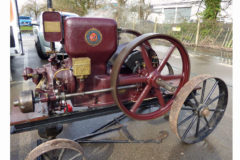 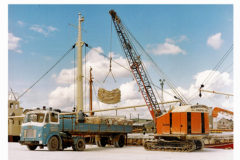