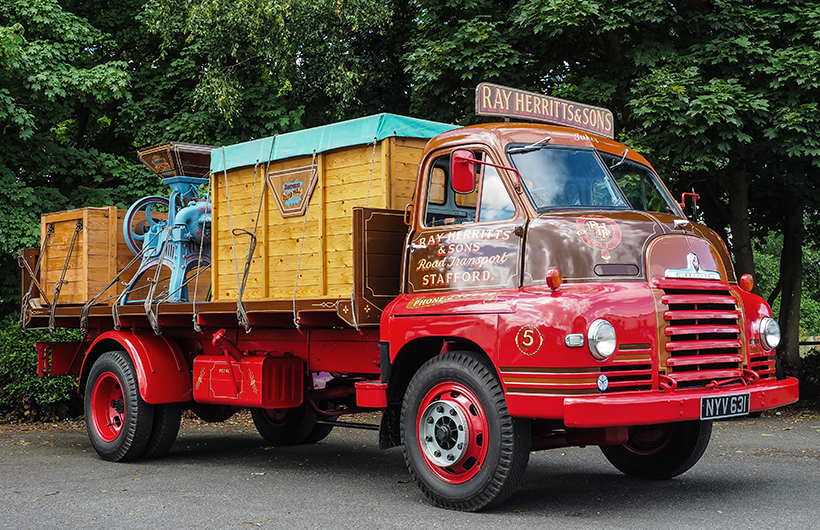 An example of traditional coach-painting at its very best. All preserved vehicles in the Herritts’ collection have names; this 1955 Bedford S Type is called Juker as this was Ray’s uncle Basil’s nickname.

Back in May 2014, Classic & Vintage Commercials was invited to pop over to Staffordshire, where the Herritts family had assembled an interesting collection of older commercial vehicles. At that time, the family’s active restored collection comprised three Bedfords, a Morris J-Type van and a couple of cars. Others, however, were on the way, and given the enthusiasm of this family, it was no great surprise to get a call earlier this year, inviting us back to see what has been going on in the intervening years…

First, though, a little family background. Father of the family is Ray Herritts. Now aged 66, Ray’s love of lorries stems from time spent as a child around Jukes Transport, the haulage business run by his uncle Basil along with his brother Jim. Uncle Basil became Ray’s uncle when he married Ray’s dad’s sister Valerie and, in his words, Ray was often “sent there when I was a kid, to get me out of the way.” This meant many weekends and school holidays were spent riding in, and generally getting involved with, the firm’s lorries, which at that time were mainly Bedfords. He also, of course, got involved with maintaining and fixing them, and as with so many of us, those experiences from his younger days left a major impression. 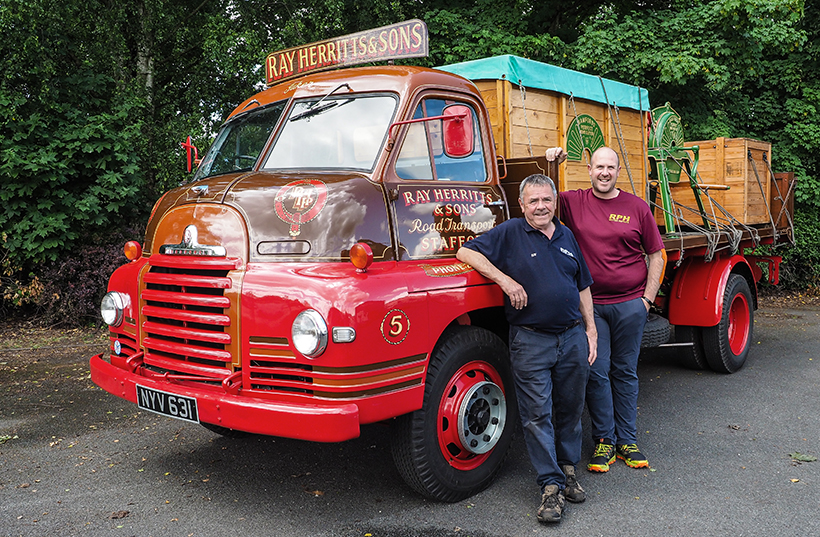 When he left school Ray did not, however, go into road haulage, choosing instead cars, and he took a mechanics apprenticeship at a local main dealership. Once qualified, a period of working in main dealerships ensued until 1981 when he set up his own business, RPH Motor Repairs. Initially RPH was based in a coal yard (a location arranged by Ray’s father) but after a few years the business outgrew the facilities available here and moved to the present premises at Aston Fields, Stafford. Today, RPH is a traditional ‘turn our hand to anything’ type of garage, working on cars and light commercials up to 3.5tonnes. At present four staff are employed though the nationwide staff recruitment problems within the retail motor industry apply here as much as anywhere else, and “we used to have six or seven working here.” Older vehicles are, of course, something of a speciality, and all the team enjoy working on them.

That ‘team’ includes Ray’s son Mike, who now owns the garage jointly with Dad. Born in 1985, Mike has grown up with the lorry fleet and is every bit as passionate about them as his Dad. In fact, as the separate feature on pages 16-18 bears testimony, he is in many ways taking the family collection to the next stage. He is, though, every bit as enthusiastic about the collection as a whole as his Dad. 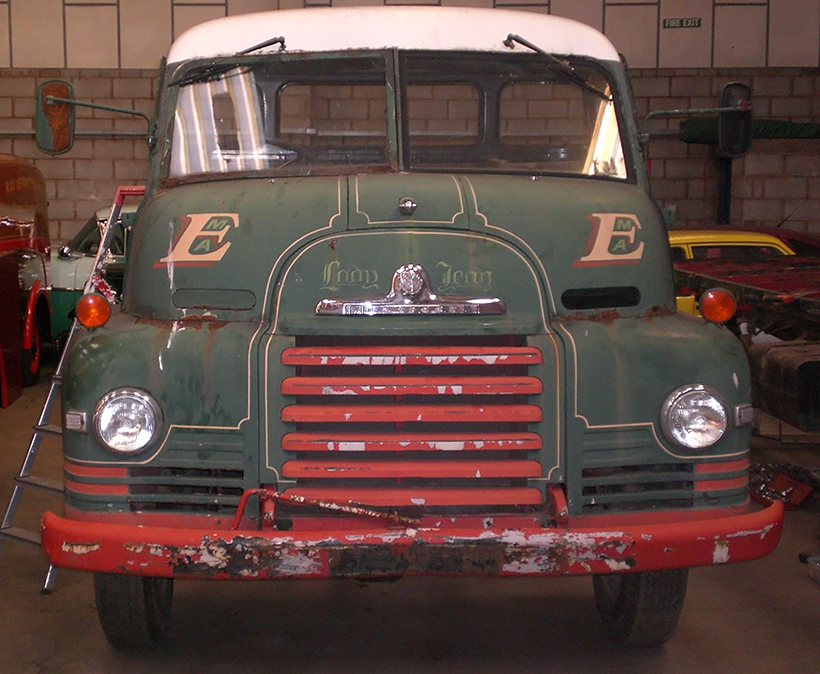 As acquired; clearly neglected but looks like it may have been preserved at some time. How and why it ended up in a scrapyard is a total mystery.

That collection started in 1981 when Uncle Basil asked Ray (who, remember, had at that point just branched out on his own) to restore a 1950 Bedford M-Type. Ray completed this, including painting it in Jukes’ traditional red and brown livery. Then, when uvncle Basil saw the job that had been done, he told Ray to “put your name on it, and keep it.” Ray was of course happy to oblige, though he did ‘name’ the M-Type Basil, as well as numbering it 1. A foresight of what was to come perhaps?

Since then, the collection has grown somewhat – to put it mildly! Including everything, Mike “thinks” they have “about sixteen” old vehicles, of which “four or five” are under, or awaiting, restoration. And over the next few month, we’ll be featuring a fair few of these, starting here, with this rather fine Bedford S Type of 1955 vintage which arrived in 2014, shortly after our last visit. 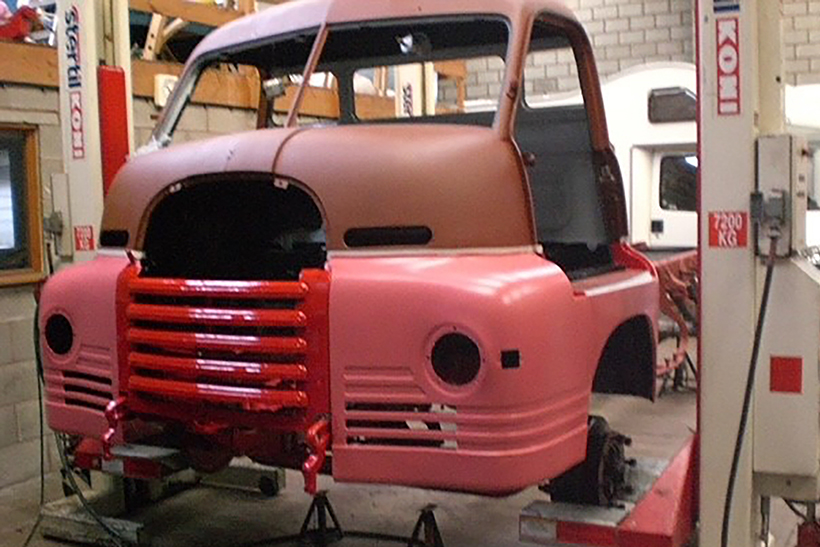 Cab restoration underway; as usual with S Types a fair amount of metalwork was required, though we’ve known them much, much worse than this…

As some of you will no doubt have deduced already from the NYV registration, this lorry is one of the batch of Auxiliary Fire Service (AFS) Bedfords that had been kept in store for use in the event of a nuclear emergency. Though the ‘Green Goddess’ fire appliances were the best-known, the AFS also had other vehicles for use in support roles such as carrying pipes, breakdown/recovery and as mobile command centres; the AFS was intended to be totally self-contained and not have to call on other agencies who, one imagines, would already have more than enough to do.

Anyway, NYV 631 was an AFS General Purpose lorry; a flat with tall sides and side bars. Its service and post-service history is, however, something of a mystery at present, though when acquired it carried branding and livery for M A Evans of Knighton, Powys. What it did there isn’t 100% certain, though some sort of semi-preserved role has been suggested; Ray says people have reported seeing it at a show or two, while others think it worked. What is certain, though, is that by the time that the Herritts acquired the S Type it was in far from show condition. In fact, they found it in a Nottinghamshire scrapyard where it had clearly been ‘resting’ for some time! 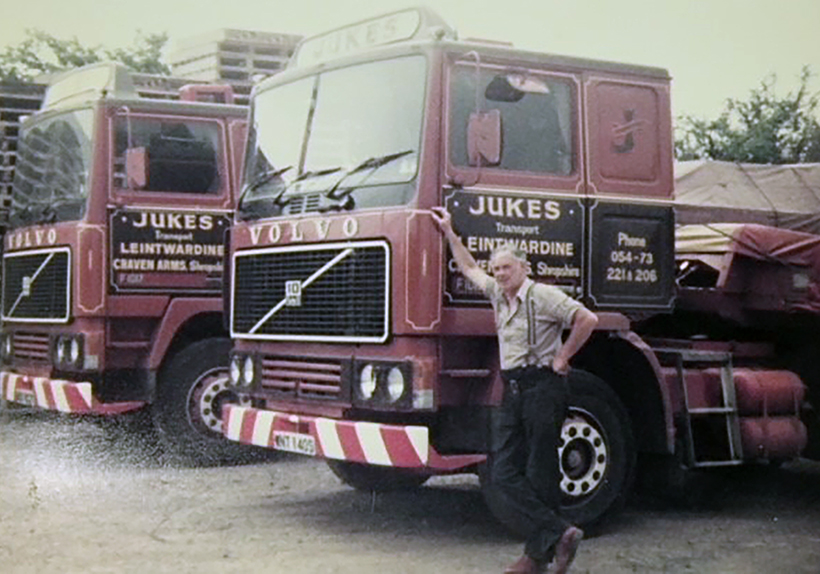 The inspiration; Ray’s uncle Basil in front of one of the Volvos used by his business in its later years.

The restoration
In Ray’s words “we didn’t pay a lot for it.” Then, after recovery back to the garage, work could begin. The original body was dumped as it needed extensive work and wasn’t, in any case, the type that was now wanted. A replacement flat body was made up in house on a designed as we went along technique. The chassis was generally in good order but did require a fair amount of blasting to remove rust, after which it was painted.  As usual with a job like this, the brakes were fully and comprehensively overhauled with new shoes and so on, along with new shock absorbers all round. The kingpins were seized and needed freeing-off, dismantling, and rebuilding with new bearings reamed in, but the springs were in good order and needed nothing beyond taking apart, cleaning up and putting back together. New tyres were, of course, fitted all round.

Parts for the restoration came from several specialists including Bygone Bedford Spares in Poole and Chris Morter in Norfolk. A second, and very rough, S Type was also bought from Sea Bee Transport of Banbury which donated a number of parts including a windscreen and wheels – it was a case of taking the best parts from both. 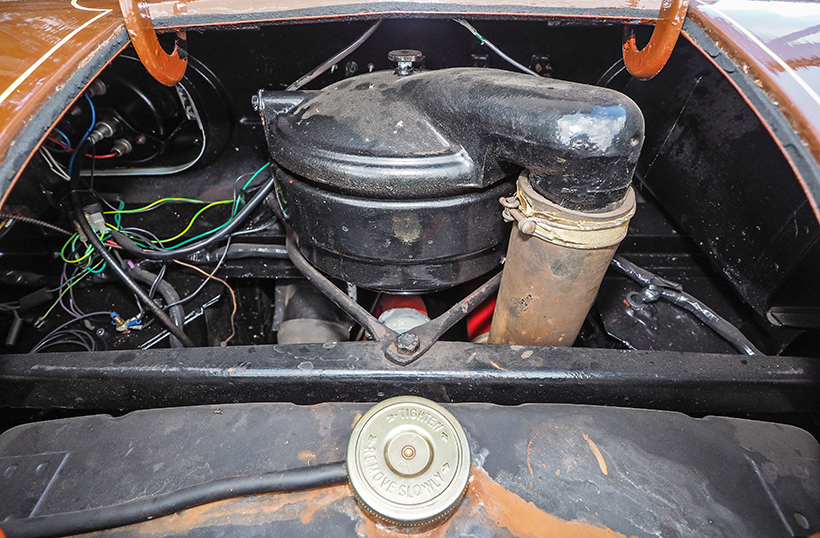 Engine access through the front is a little, shall we say, limited…

As usual with S-Types, the cab needed welded repairs in several of the usual places including around the bottom sections and the top of the wings, along with new rear quarter panels on one side. New cab steps were also made for both sides. Inside, the seats were re-upholstered and new covers fitted, and the inside repainted along with the cab outside.

While we’re on the subject of paintwork… In the 2014 feature, we mentioned old-school painter and signwriter Jim Spink, who Ray has known since 1981 when he, too, was based in the former coal yard where Ray started out in business. Back then, he was 85 and still working. He is now 93, and though no longer painting professionally, he is still around and active, and was prevailed upon to do the business on this lorry. As we saw in 2014, he uses traditional coach paint and traditional coach-painting techniques, and applied the colour coats and the fantastic original-style signwriting. 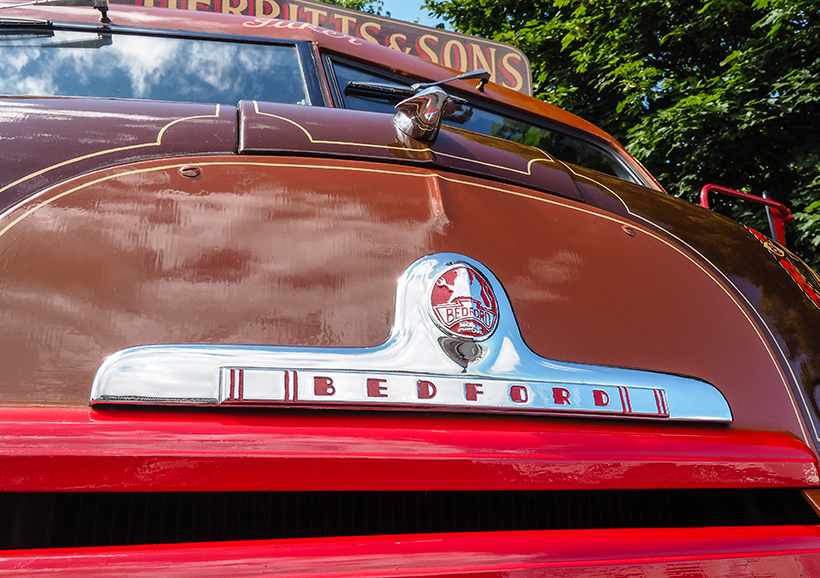 Distinctive nose. Under here a rexine ‘funnel’ directs air from grille to radiator.

On the mechanical side, the gearbox and back axle were in good order and needed nothing beyond new lubricants. The Bedford petrol engine, however, was a different story as one of the valves on number three cylinder had dropped its end through the piston. This is a not-uncommon occurrence as, unusually, the Bedford valves were made from two parts welded together, and the bottom section does sometimes become detached, as happened here. Fortunately, the rest of the engine was in good order – the AFS vehicles were hardly used while in government ownership – so a new valve, a new standard size piston, honing-out the affected bore and the usual decoke/clean up soon had the engine back in fine running order. While everything was apart, however, it was also treated to a new set of bottom-end bearings.

Elsewhere on the mechanical side, the radiator was re-cored locally. At the back, the rather flimsy rear mudguards that the lorry came with were replaced by a purpose-made pair from a Bedford specialist in Yorkshire. 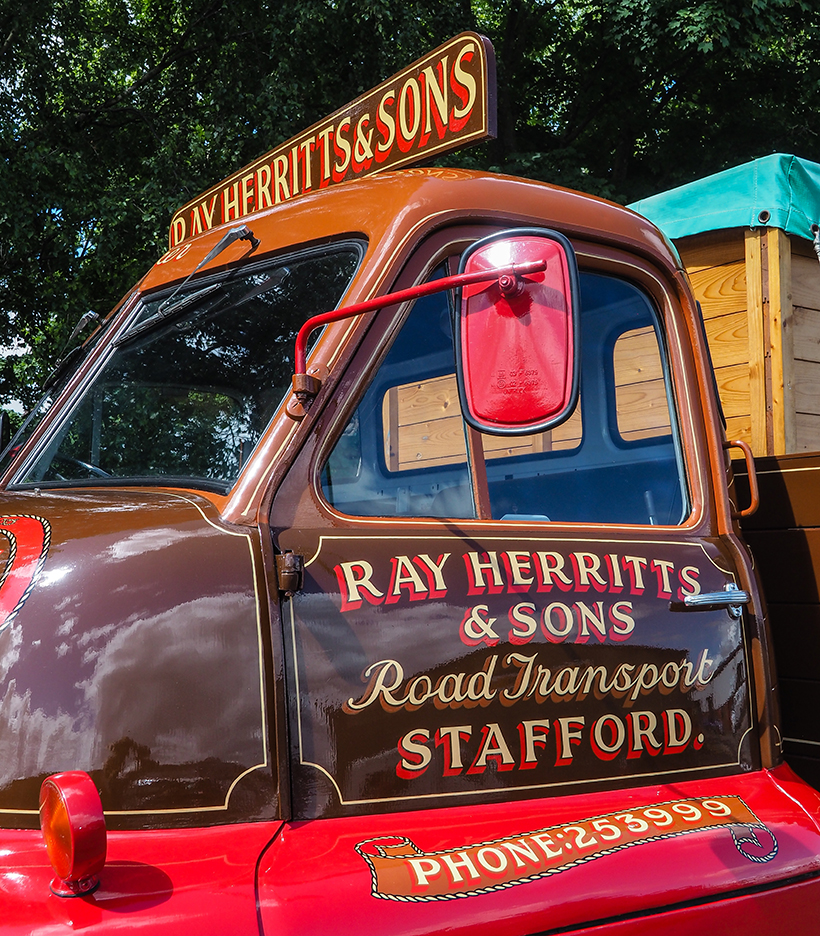 There is one other feature of these lorries which is often missing; a rexine cover between the cab body and the radiator which is intended to guide air that enters the grille on to the radiator, maximining cooling. The Herritts were keen to reinstate this, partly for originality but also to make the cooling system as effective as possible given the greater volatility of modern fuels. This was completed and installed and though almost invisible, it does seem to be doing what it was meant to.

Load with a purpose
As presented now, the S Type has a period load fitted permanently, comprising two boxes and some period farm equipment. The first box was designed to hold a quad-bike which was intended to provide transport around larger shows for the younger family members, and the box at the back carries the deckchairs plus tools and an emergency supply of fuel. Between them there are two pieces of vintage farm equipment; a root cutter and chafe shaker; both of which would once have been everyday sights on rural farms back in the day bit are now rarely used. Both machines are manufactured by Henry Bamford & Sons, a well-known Uttoxeter firm a son of which, Joseph Cyril Bamford, left to start a fairly successful manufacturer of excavators and digging machines called JCB… 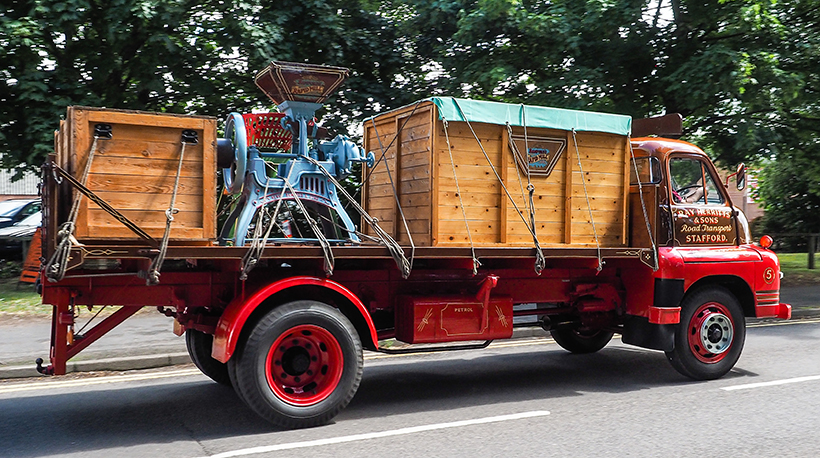 Dummy load has a practical as well as visual purpose; it weighs the back down, making the lorry ride as the designers intended.

Besides looking the part, the ‘load’ serves a practical purpose as it dampens the rear end and stops it from bouncing about. Non-driving enthusiasts don’t always appreciate that commercial vehicle suspension set ups are generally designed to work best when a vehicle is carrying its full payload, as driving an unladen lorry is dead mileage and should be a relatively rare occurrence.

And really, that’s about it. According to Ray, the Bedford is extremely pleasant to drive, though it does sometimes “get a bit warm” in the cab. It’s happy on the road at 45-50mph. Being petrol engine it’s a bit thirsty of course; Ray reckons 10-12mpg is as good as it gets, and to add insult to injury it needs E5 Super Unleaded and a lead-free additive. But hey, it’s a hobby lorry, not a working one, and since completion it’s done a fair few shows and road runs, including Gaydon and Llandudno. A fine addition to a fine collection which, we suspect, has still not stopped growing… 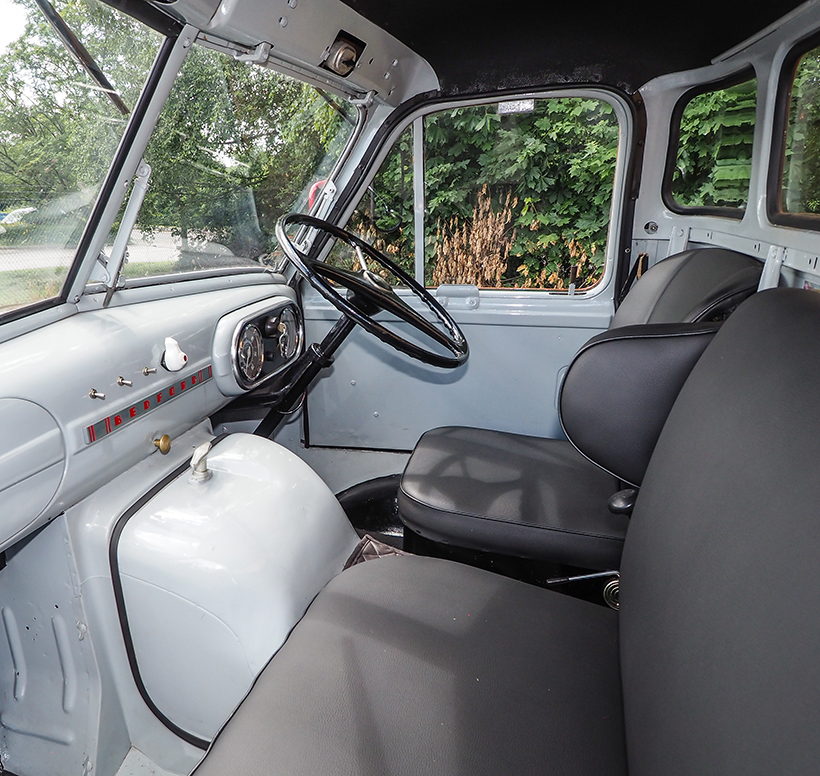 Cab interior is basic but well-restored. It can get a bit hot and noisy in there, though, with the engine under that detachable cover. A lot of routine servicing is done through there. 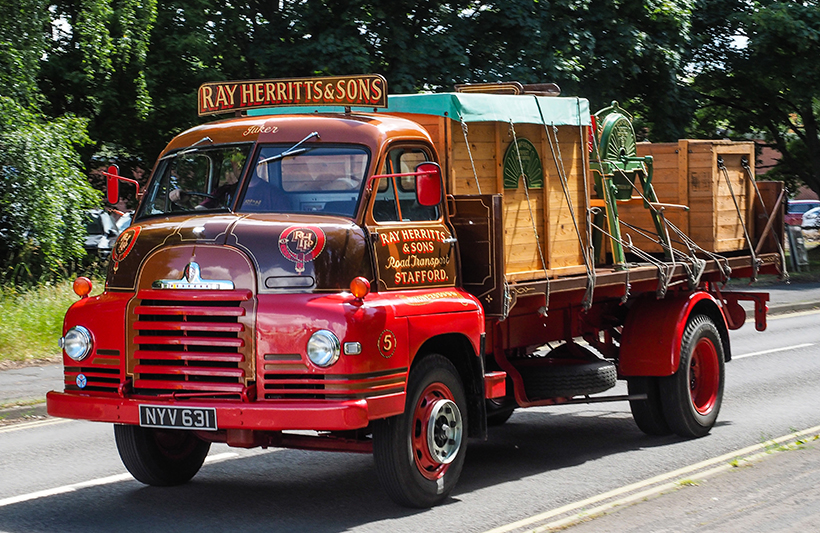 On the road it’ll do 45-50mph quite happily, though the petrol engine is a bit on the thirsty side.

This feature comes from the latest issue of Classic & Vintage Commercials, and you can get a money-saving subscription to the magazine simply by clicking HERE 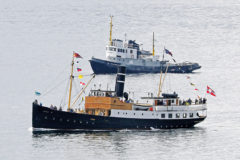 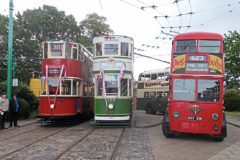