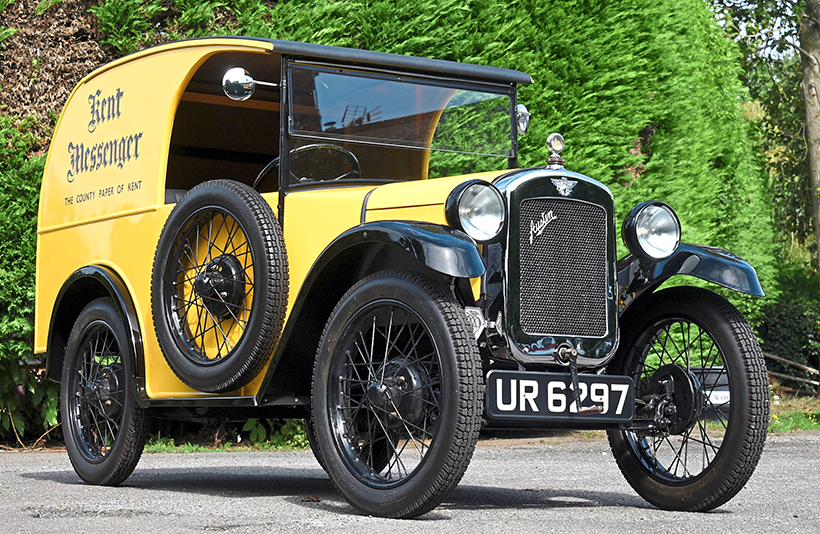 Over the next 20 years, pre-war vehicle enthusiasts will be celebrating various centenaries, but none more important than that of the Austin Seven. As we all know, as the first affordable ‘proper’ car – that is, conventional in all respects, able to seat four people and powered by a four-cylinder, four-stroke, water-cooled engine with shaft-drive to the rear wheels – it made the benefits and pleasures of motoring available to the middle-classes and, in so doing, determined the course of 20th century Britain. The local newspaper had offices in Ashford, Canterbury, Dover, Gravesend, Maidstone and Sevenoaks.

From the first, crude cars of 1922, it evolved over 17 years into something much more modern and substantial before production ended in 1939. In that time, 290,000 Sevens were built in total, and it even went some way to colonising Europe and America, being built under license by Rosengart, BMW and American Austin. Thousands were still giving faithful everyday service into the 1960s, especially with students, to whose sense of humour and depleted finances they especially appealed. 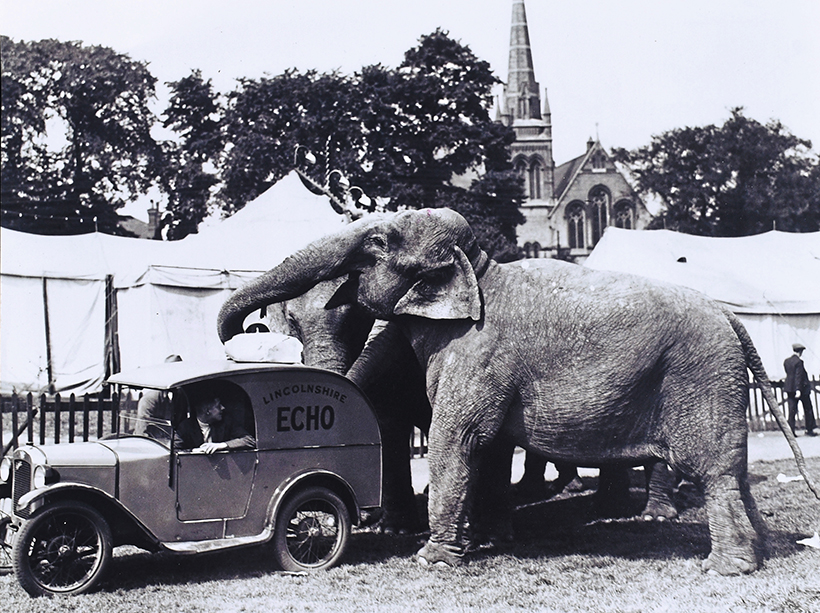 All Ken had for reference was two photographs; this one taken at the Bertram Mills Circus…

The Seven revolutionised not just middle-class family motoring, but also changed the face of industry and commerce in Britain. For anyone whose livelihood depended on efficient deliveries, from small independent tradesmen to large fleet operators, the new ‘baby’ Austin made life easier than it had ever been before. 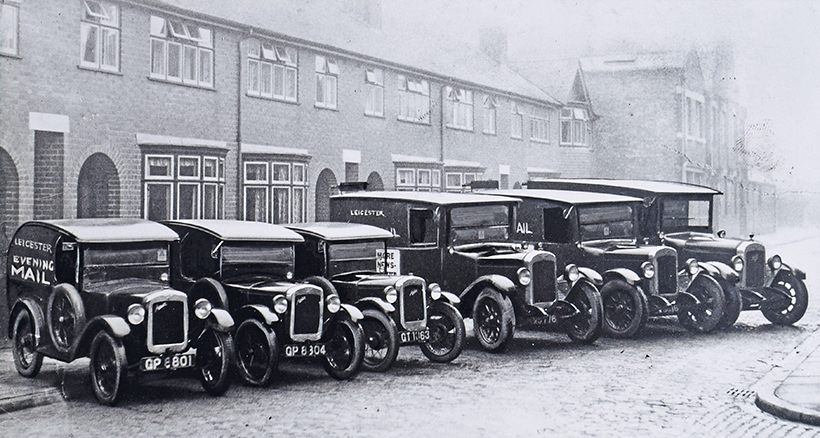 … and this one showing the Leicester Evening Mail fleet which included three, slightly different roll-top vans.

While the first Seven saloons didn’t appear until 1925, the factory offered van bodies early on, along with other, shorter-lived forays into commercial vehicle production. The first van, an attractive but diminutive offering with a payload of just 2½cwt, was introduced in 1923. At the time, the only other bodies which Longbridge would provide were the basic Chummy, the rakish Sports and Super Sports models derived from Eric Gordon England’s enthusiasm for racing, and a commercial traveller’s car. 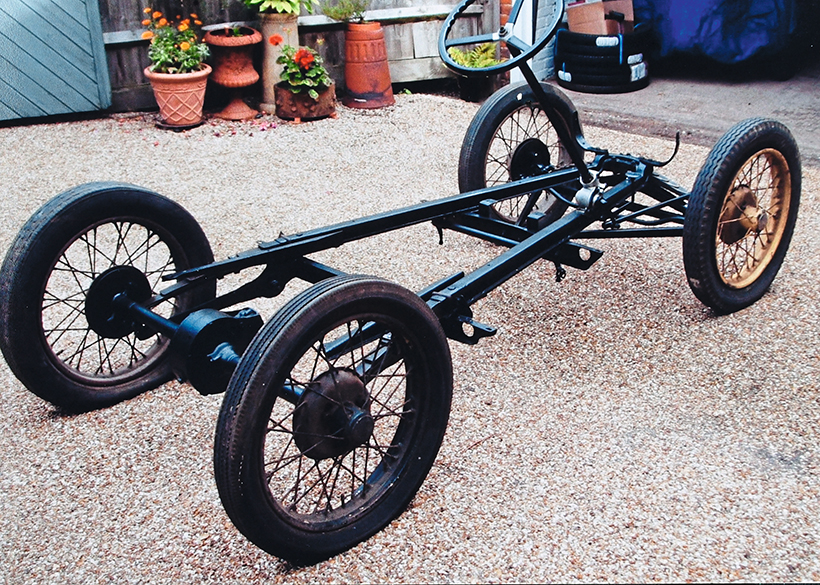 The bare 1930 chassis Ken started with.

An experimental single-seater taxi-cab was shown at the 1923 Commercial Vehicle Exhibition. One has to wonder whether this was intended purely for publicity purposes, as its practical limitations and lack of commercial appeal must surely have been obvious to such a perspicacious mind as Herbert Austin’s. 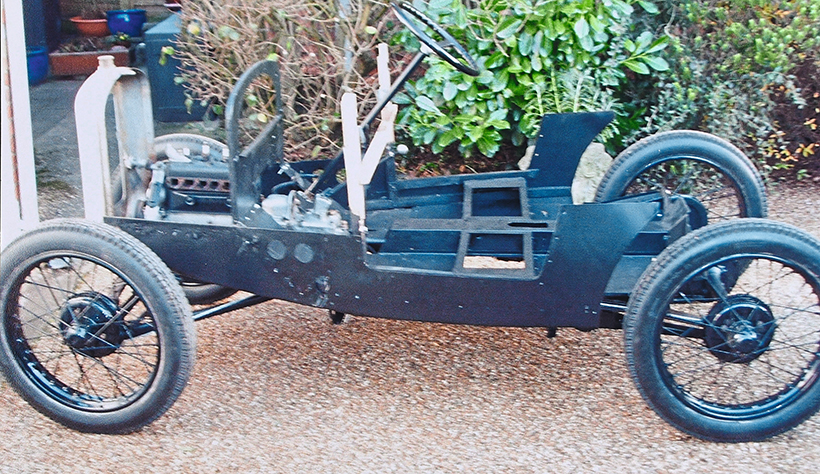 Taking shape after Ken had constructed the floorpan and bulkhead.

The vans, though, were a runaway success, and would survive until the very end in 1939. Costing £180 at launch, the early vans, with their distinctive and familiar C-cab shape, had bodies by Thomas Startin Coachbuilders Ltd of 71 Aston Road North, Birmingham. Startin remained Austin’s van builder until mid-1930, when the much more modern RL-type van took over. The shape of the C-cab body was relatively easy to form.

All that was just what the factory had to offer. Among private owners, the number of possible uses for the 7hp chassis was seemingly endless. The mid-1930s Austin promotional film The Mighty Atom showed a Seven engine being used to power a mobile spray-painting unit, a one-ton railway crane and the trains of the Yarmouth Miniature Railway. The late Austin Seven collector and Rolls-Royce restorer Paul Wood owned a beautiful lawnmower converted by Ransomes, Sims & Jefferies using a shortened 1925 chassis. 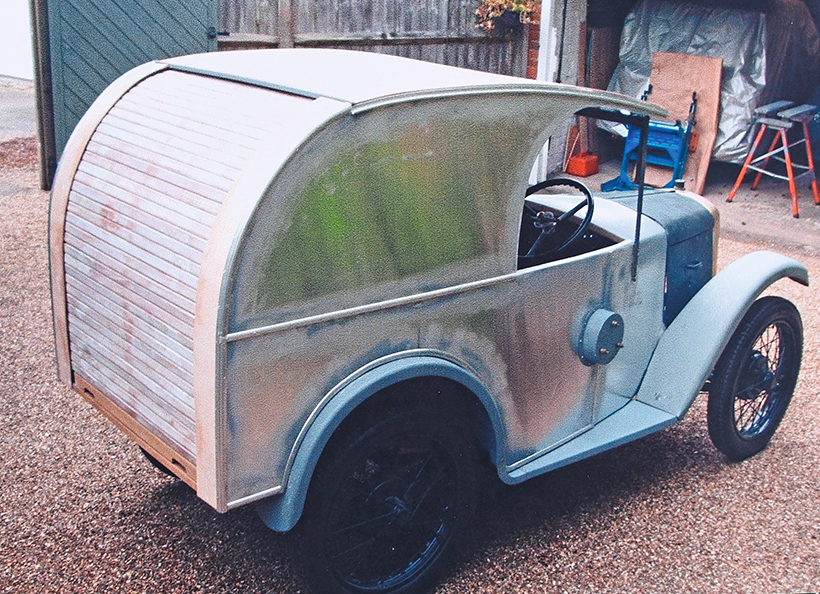 The door took some thought to get right, as the body gets narrower nearer the front.

One of the most common conversions was to make Austin Seven tractors, a number of which survive, although some Seven-engined tractors were reputedly made by Longbridge in the 1920s. The conversions might have been performed at any time from the 1920s through to the 1950s and ’60s, but most were probably made from worn-out passenger car chassis which had reached the end of their usual working lives. While they were most typically used in market gardens rather than for heavy-duty agriculture, a feature of many conversions was the incorporation of two three-speed gearboxes mated together, which gave them a total of nine forward gears and six in reverse. This versatility, combined with their unusually small size, meant they really would go anywhere. 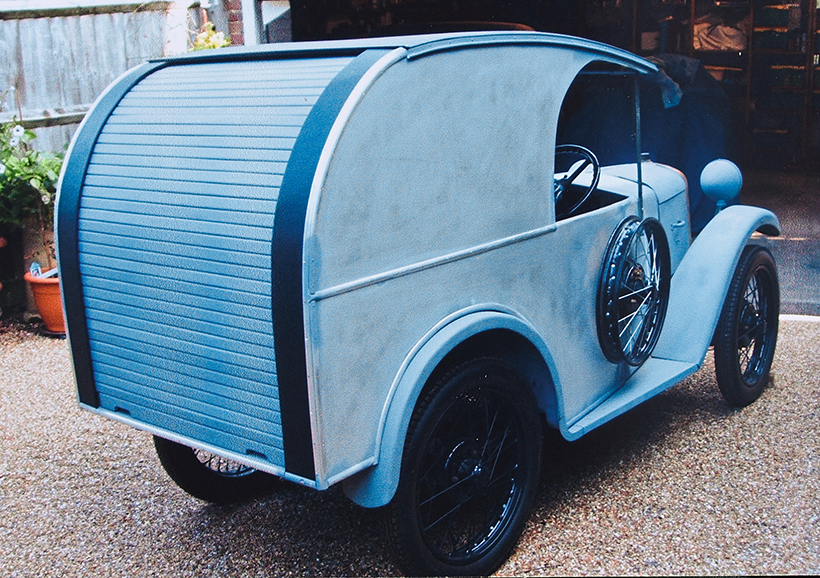 Ken finished by putting the van in primer.

All that has been written so far may not be unfamiliar to dedicated students of the Austin Seven, but we will now turn our attention to something not in the history books: the roll-top newspaper van. The sole example which exists today is a replica, built between 2015 and 2019 by Ken Kimber. As an enthusiast for over 60 years, it would be remiss not to recall some of his early adventures. 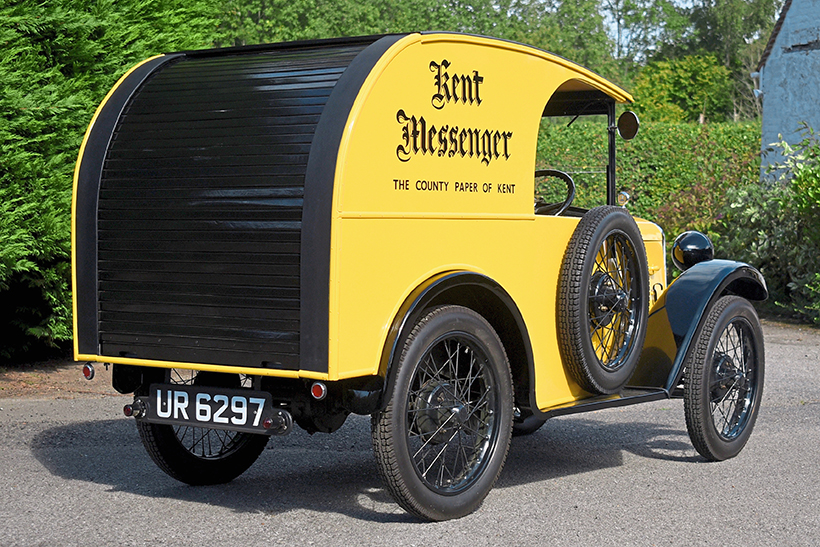 “My first Austin Seven was a Ruby,” he begins, “which I bought in 1960. I was going to go to Scotland with a friend but, just before we set off, it broke a half-shaft; perhaps due to slightly over-enthusiastic driving. Someone I worked with, when I turned up on a bicycle, said, ‘I’ve got a Seven, the engine’s no good and it needs kingpins, but you can have it for a fiver.’ 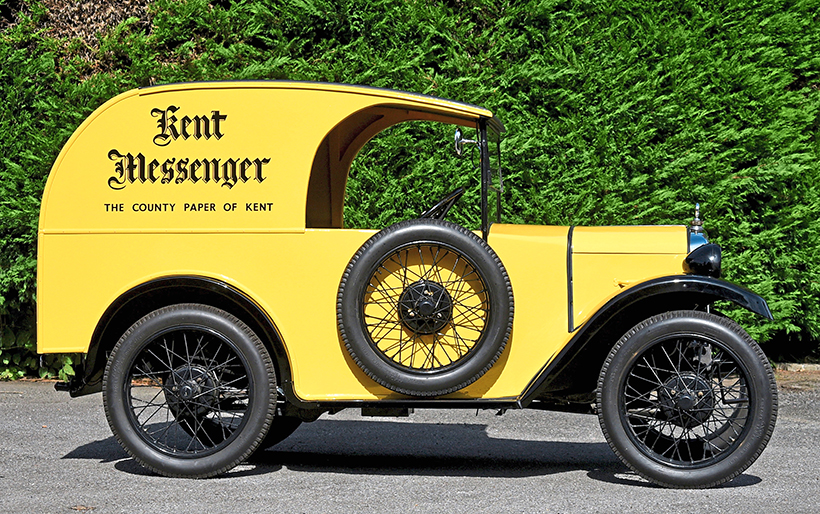 The curved rear gives the van a most attractive profile.

“At the time I thought it was an Opal but, in retrospect, I think it might have been a military tourer, as it was khaki and had extra switches and wide tyres. I thought that would be a better prospect than the Ruby, so I took it to the MoT station with the Ruby’s engine and front axle fitted, then left for Scotland. No breakdown cover, no mobile ’phones, just young lads on an adventure… 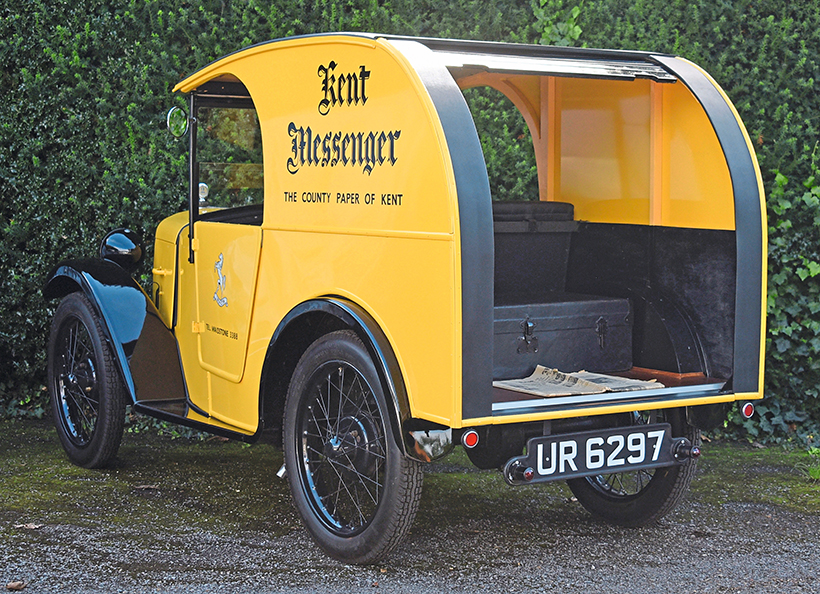 Access to the rear is superb, with the door virtually disappearing.

“It went well until a dynamo brush disintegrated in Yorkshire on the way home. When it got dark and we were overtaken, we desperately clung to vehicles for as long as possible for their lights…” The polished nickel radiator is instantly recognisable to any vintage-car enthusiast.

Ultimately, it gave up just 300 yards from Ken’s home. He part-exchanged it for an MG PA, but upgraded to an Austin A30 when he started college in Bath and wanted something more modern. In the 1970s, he returned to Sevens when he got involved with 750 Motor Club trials. He drifted in and out as personal and family commitments allowed but, when he was forced to abandon motorsport for health reasons, he decided to enjoy motoring at a slower pace. 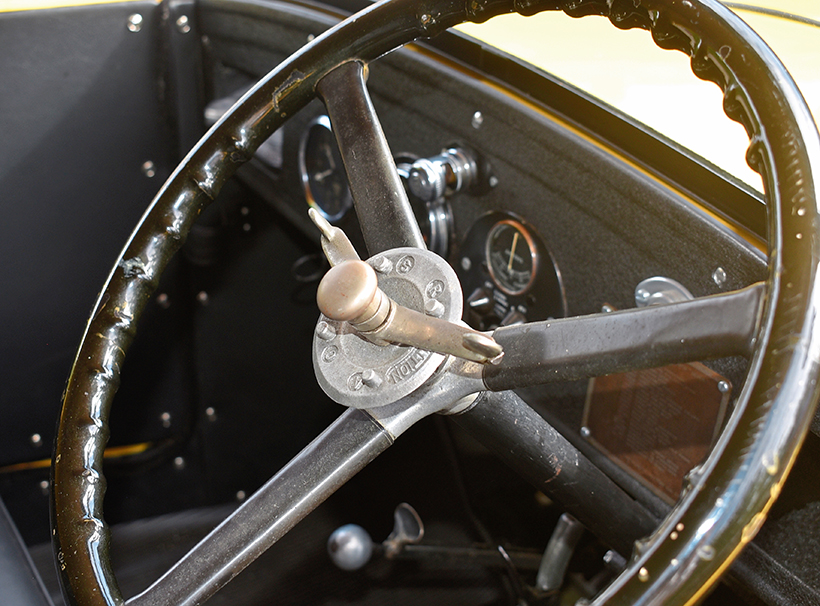 With only ignition and throttle controls plus a horn button, the steering wheel is simple and uncluttered.

Having recently transformed a bare chassis into a replica of an Austin Seven Speedy, the roll-top van came about when an old friend offered Ken a shedfull of Seven parts, including a 1930 chassis with logbook, engines, and enough assorted spares to fill the boot of his estate car seven times over. 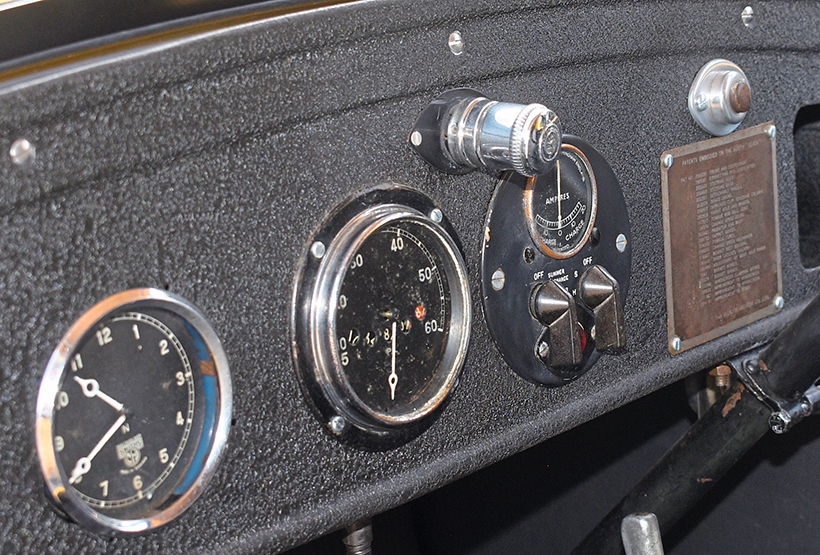 In addition to the speedometer and ammeter, the clock is an unexpected luxury.

Ken was fascinated by the roll-top van after seeing a letter and some photographs in a 1980s club magazine, and he at once determined to replicate the long-lost body style. To start with, he only had half a floorpan and, he says, “Some enterprising bees had used the radiator for making a nest. I was able to assemble a decent-looking chassis, but I had to start by fabricating the missing parts of the floorpan.” 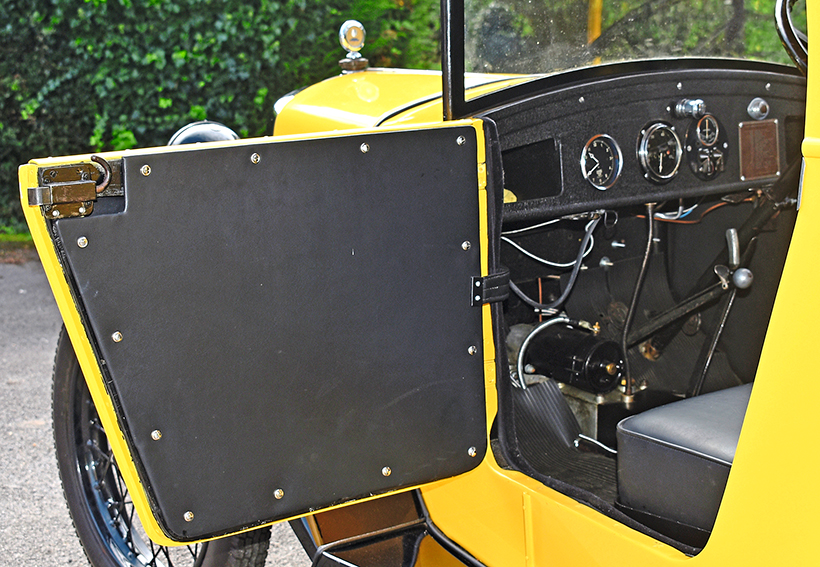 Ken devised his own door locks, since the roll-top vans had no external handles.

He built the scuttle, but then had to work out how to do the body. “I was brought up on a farm where you had to make do and mend, so I developed pragmatic bodging skills. I can recognise when I need to farm-out work, but I did the body myself as the curvatures were all fairly straightforward. I then had the question of how to make the roll-top shutter work.” 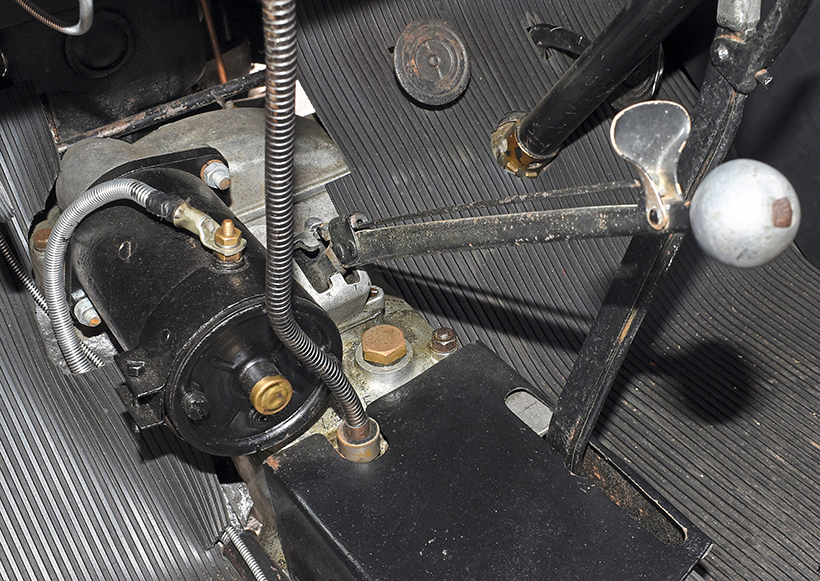 The agricultural gearstick and footwell-mounted starter motor are familiar sights.

As the door slides to the windscreen, where the body is narrower, the tracking had to be over 8ft long and not of a constant radius. He continues, “I bought rectangular-section aluminium tubing that bent easily and, after pulling it round a jig, I was able to cut one face off to form the U-shape I needed. Then I glued the wooden slats to a sheet of vinyl.” With that, an Austin lost to history had been brought back to life, and then painting and sign-writing got it to its present handsome appearance. 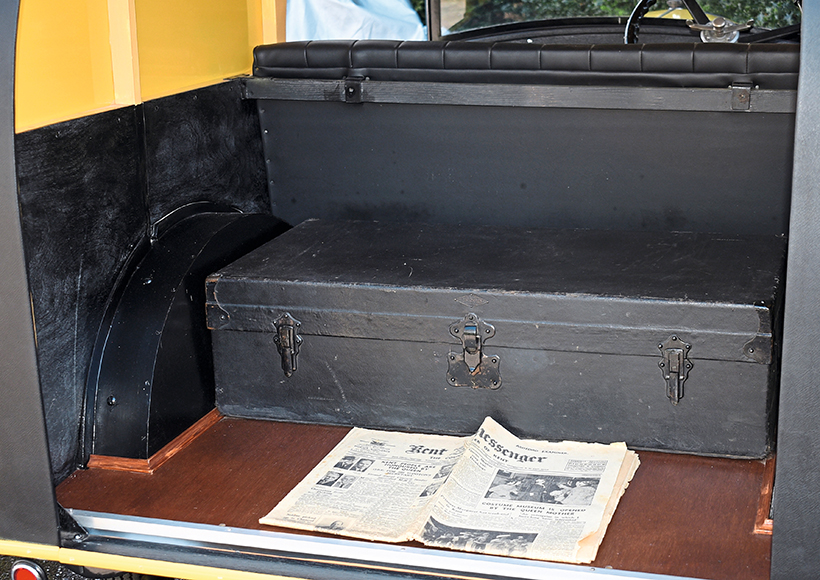 A period trunk houses the tools, but load space is on the small side.

All that’s known today of the roll-top vans, which were originally used by the Northcliffe Newspapers chain, comes courtesy of the late 750MC stalwart ‘Titch’ Allen, who worked as a junior reporter in the 1930s for the Leicester Evening Mail. Allen wrote, “We had a fleet of vans which had a rounded, streamlined back of wooden slats exactly like the roll-top desk which was then an almost essential part of office furniture. They were used to rush newspapers to corner-site paper sellers and newsagents and, as in the open position it was like a hatchback without the hatch, it was very easy to load and unload bundles of newspapers. Very often a young assistant would sit in the back with his legs hanging out to facilitate the off-loading. 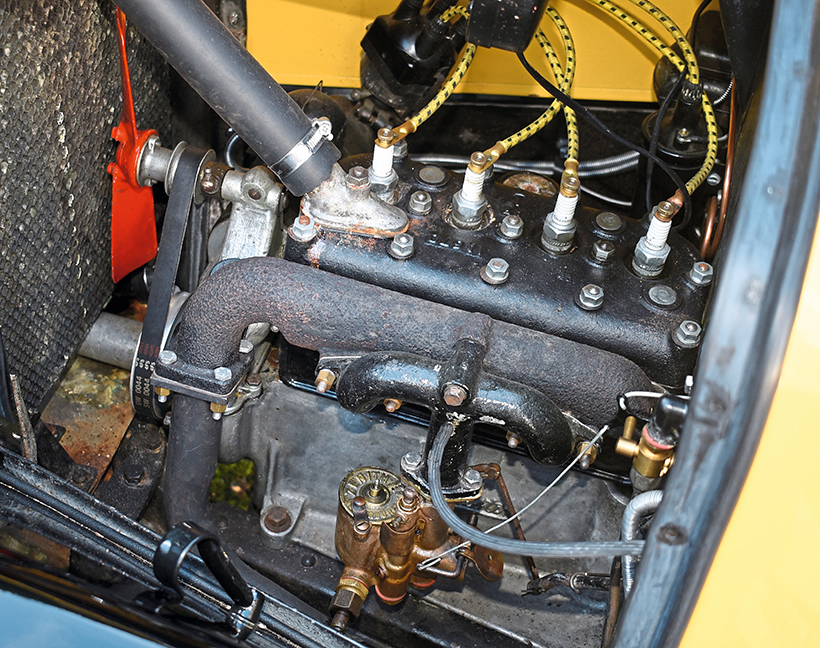 Austin’s famous 747cc four; one of the most versatile engines ever.

“They were built on a 1930 chassis and were painted pillar-box red, our group colour. Being an enthusiast with an £8 1927 Chummy, I often volunteered to do one of the runs round country villages to get my hands on one as, being well-maintained, they were much more fun than my banger. They had reasonable brakes, too. Though thrashed unmercifully by all and sundry including me, they were dead reliable. I am sure these vans were used throughout the group and I think ours had been used in south Wales before we got them. Our sister paper in the Midlands, the Derby Evening Telegraph, had some for sure. Our rival paper was the Leicester Mercury, and it used Bullnose and Flatnose Morrises which could be seen off by our Sevens in the street races which took place to be the first out with the news. When the Mercury acquired a fleet of 70mph, six-cylinder Bedford vans, we finally had to admit defeat.” 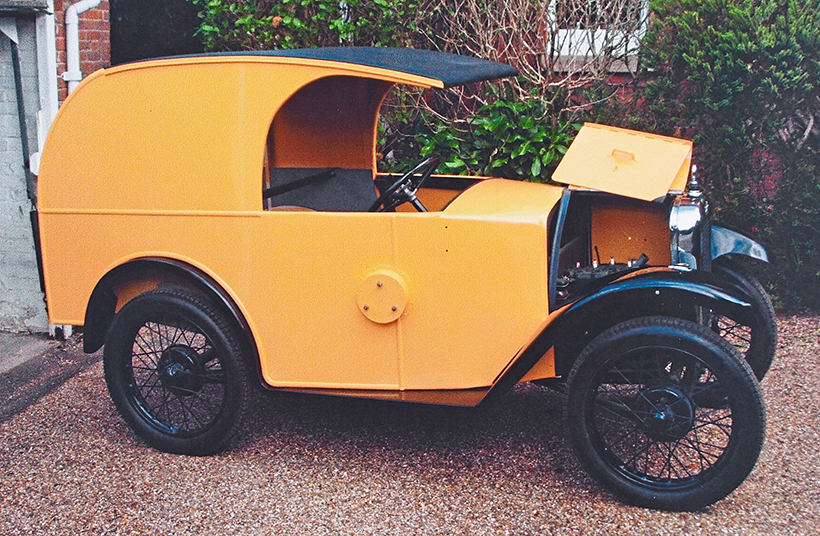 Anything else must be gleaned from the two surviving photographs, which show a Lincolnshire Echo van being investigated by elephants from the Bertram Mills Circus, and the fleet of the Leicester Evening Mail. Close observation shows that the C-cabs follow a different line from the Startin bodies, but look closer still and it can be seen that they all differ subtly, so it may be they were all built by separate small coachbuilders to a general specification. Then again, the fact that the Leicester vans carry south-west London registrations suggests some sort of shared origin. 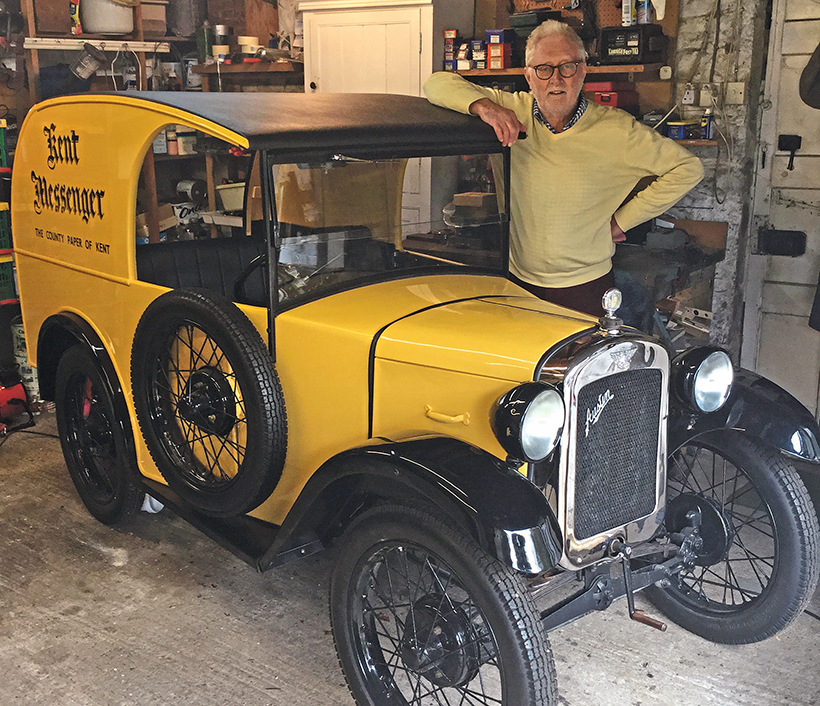 After spending four years on the build, Ken Kimber looks forward to using his van.

An inconvenient detail was the absence of a driver’s door. While common enough among early cars with right-hand gear-change, the Seven’s central gear-change makes getting in from the passenger side a good deal harder. For this reason, Ken fitted a bench seat rather than separate seats, and he has also done without a full partition to facilitate communication between the driver and the assistant described by Allen. The Kent Messenger livery required artistic licence, as it was never a Northcliffe paper, but Ken is a Kentish man and it looks most attractive regardless. 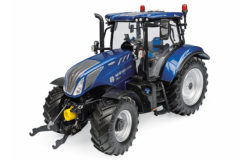 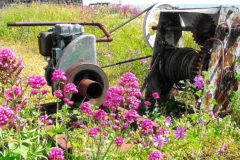