Despite the lack of rallies this summer, Merv Pollington has been out and about on his fantastic, 4in Dodman traction engine. This is his story. 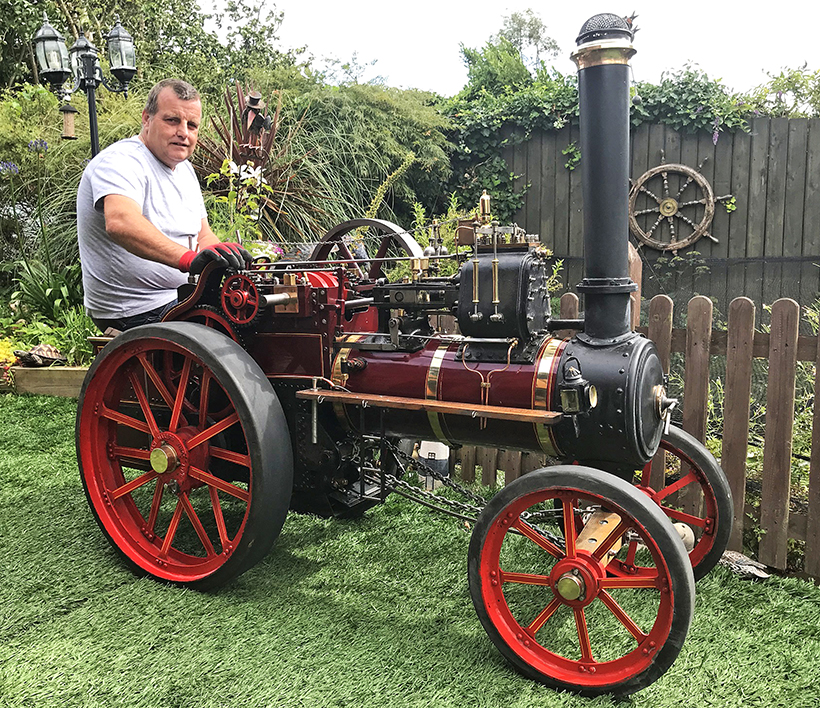 Merv Pollington would love to be out on the rally field with his superb, Dodman 4in traction engine.

The story of my Dodman traction engine really stretches right back to the time when I first became interested in steam. I can vividly remember watching the 4472 Flying Scotsman go past the end of our garden in the early 1970s, and that’s when it all started. My father was a very keen steam enthusiast, and would take us to all the shows along the south coast.

My first ride on a traction engine was during the Queen’s Jubilee celebrations in 1977, in my village of Barnham, West Sussex. I remember just hanging about all day near the engine and, to this day, I’m not sure what engine it was. Eventually, I think they took pity on this 11-year-old boy and, at the end of the day, asked if I wanted a ride back to the yard at which it was stored. Although that was only a half-mile run, I remembered that journey for such a long time afterwards, and I think it’s really what made me fall in love with steam.

Old-time steam fair
We were lucky that Major Baldock’s Hollycombe establishment, with its old-time steam fair, was only an hour’s drive away, so we used to go there quite a lot. In the early days, you had to buy tickets and I can still remember that we used to save the last ticket for the last ride on the steam yachts, as this was always the longest ride of the day.

My wife Linda and I decided that we’d like to own our own steam engine. Luckily, Linda was also brought up to visit steam rallies, and we started to look around and wanted to get involved. After doing our research into owning a miniature, I booked a two-day driving course on a full-size Fowler No. 12899 5hp road loco, Western Star, in the Lake District. We gained a lot of knowledge from owner Chris on that course, which we’ve put into practice with our own engine. 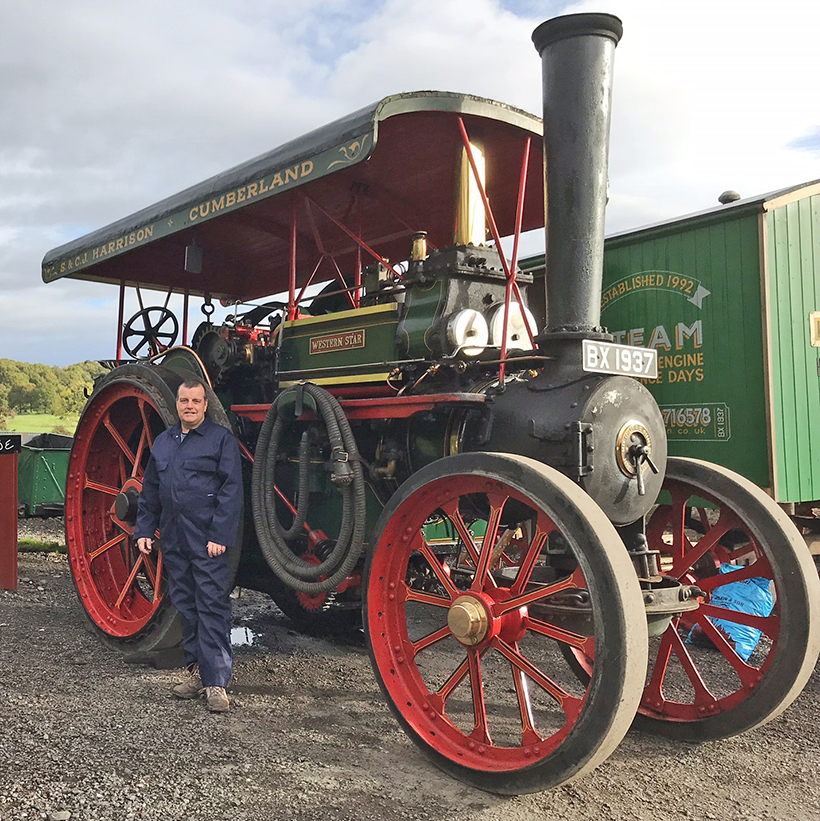 Merv and his wife, Linda, were looking forward to the day ahead with Western Star; they learnt so much.

My mate, Dave Edwards, had built a 4in Burrell single-crank compound a few years back, so I had a chat with him, and even managed to get a drive of it at a show. If I wasn’t sure beforehand, that definitely sealed the deal about purchasing our own engine!

I was at Weald & Downland Living Museum Vintage & Steam Show in August 2018, where I headed straight to the miniature section to talk to the owners about their engines, the differences between them and also the pros and cons of the different scales. We decided we wanted something a little bit different, and went for the larger, 4-inch scale size that would easily pull us and our grandchildren around the rally field.

Valuable lesson
The one thing I learned while looking at purchasing an engine, is that the paperwork is the most important part of the deal; it should come with the complete history of the engine, and the more of it there is, the better. The records that came with our engine included the boiler pressure test when built in 2007, with test certificates for the steel used and also the welder’s approval certificates, plus all the old hydraulic and steam test tickets. 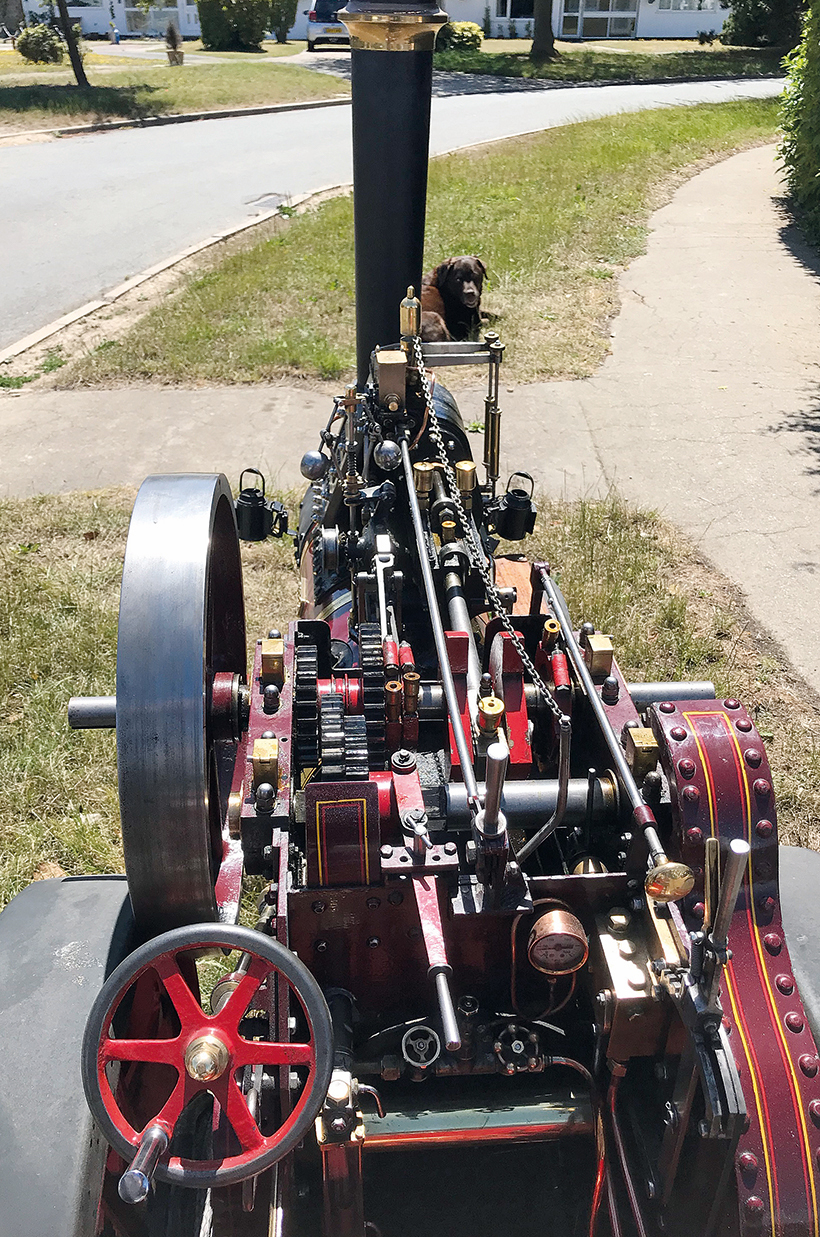 As can be seen, the view from the footplate is rather different to a Burrell single-crank compound, and features four shafts rather than three.

After looking around as to what was available, I came across a 2009-built Dodman single-crank compound. The engine has a steel CE-marked boiler by AJB engineering, with expandable steel tubes, with a working pressure of 160psi. It has a steam water injector and a mechanical pump fitted, and the tender is filled up by a removal plate in the top, which makes filling up very easy. Another nice feature is the steam blower, as the valve is fitted on the footplate, so you don’t have to get off the engine to turn the blower on.

The engine was offered by Graham Johnson, along with a ride-on trailer and all the firing irons. The engine was, at the time, in his conservatory and covered in a canvas as it awaited its yearly steam test. Graham agreed to put a new 10-year hydraulic and a year’s steam test with the engine.

The test was carried out by Peter Hawkins, who’d done the previous test on it while in Graham’s ownership. I’d spoken to Peter a few times while looking at purchasing an engine as he lives just around the corner from us in West Sussex, and he confirmed that the engine was a good one.

After a deposit was paid, it was agreed that, once the test had been carried out, I would come back and witness it in steam. A few months later, the phone call came and off I went to get my first look at it in steam. 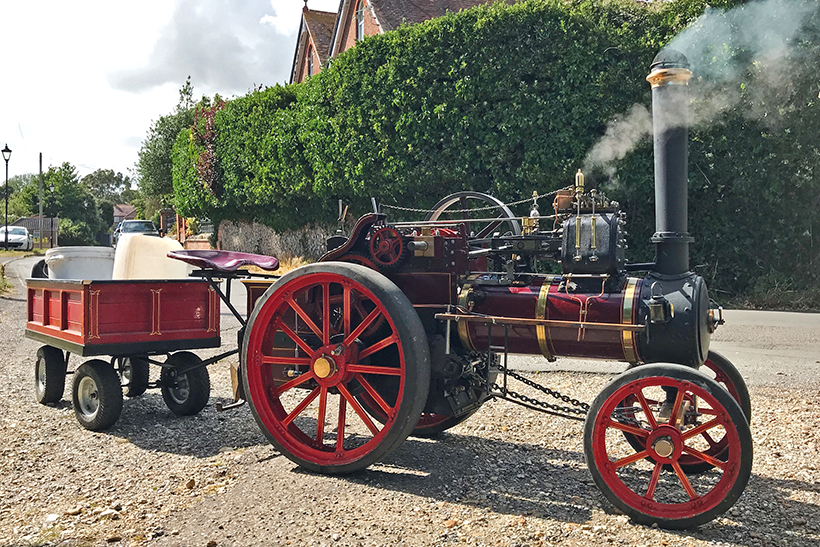 This design features Salter safety valves, and is never shy of steam!

Upon arrival, we went through lighting the engine and getting steam up, and then just listening to it tick over to make sure there were no strange noises or knocking anywhere. Then it was time for a trip around his garden. With the engine running smoothly backwards and forwards and turning over in all notches of the reversing lever, the deal was done, and Linda and I were the proud owners of our own traction engine.

Impressing the family
Once loaded on to the trailer we set off on the short journey home. The boiler was still warm, so it didn’t take too long to raise steam again so that I could show it off to the family. We decided to call the engine Reg, after my late father-in-law, and it’s really a family engine now. My stepdaughter, Tracey, and our 14-year-old granddaughter, Bryony, are both learning to operate and look after it.

Since having the engine, we try and run it as much as we can, and have only had to do minor bits and pieces; strip-down the mechanical pump, solder a new nipple on the steam injector and adjust the timing. 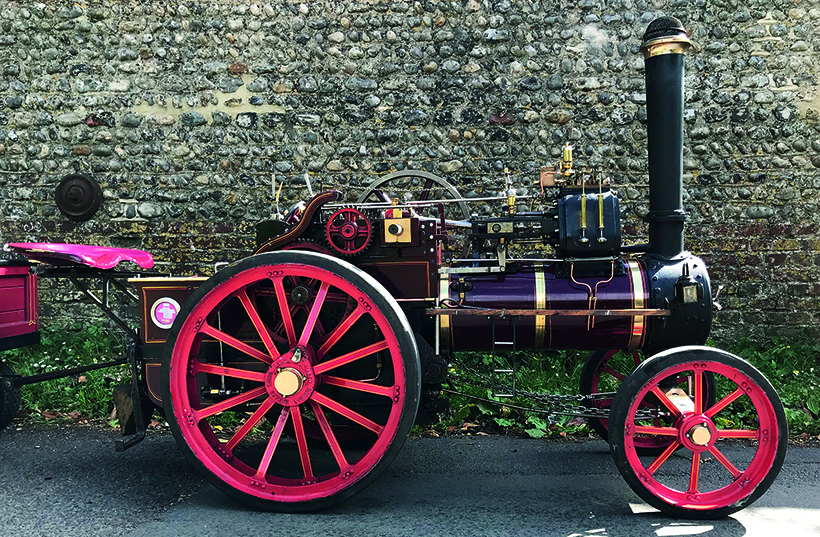 No, this isn’t Norfolk where the full-size engine was made and where you can find traditional-style walling like this, it’s West Sussex.

Taking it to the shows, you get a lot of interest from young and old visitors alike; I think one of the reasons is that they can all look down on to the motion and see it working, which isn’t so easy on a full-size engine. People often ask what it was made for and you have to explain that’s it’s a model based on a full-size engine.

The first, 4-inch Dodman SCC model was designed in 1996 by Peter Filby and, in a strange coincidence, the boiler design was approved by SPF Inspection & Consultancy, of Yapton, W Sussex; since then, I believe that only around 40 or so have ever been built. The back wheels are 28in high, it’s 54in to the top of the chimney and 74in long. The engine is fitted with a reinforced wooden front axle which was normal for engines built at Dodman’s Highgate works in King’s Lynn, Norfolk.

After some research, we realised that the Dodman story was quite an interesting one. The engine is based on an engine built in 1893/4 to Dodman’s design of a double-cylindered compound engine with a single connecting rod. It’s different from the Burrell design as the high-pressure cylinder sits directly above the low-pressure cylinder, which was said to be more aesthetically pleasing. It was a big engine with cylinders of 6.25 and 11in bores, with each piston working on a 12-inch stroke.

Legal threat
However, after building the single-crank engine, he was threatened with litigation by Burrell’s, as the company believed its copyright had been infringed. Unfortunately, Alfred Dodman took the engine back to factory and dismantled it. The company never made another SCC engine.

In fact, there are no survivors of Dodman’s two, different single-cylinder traction engine designs, even though at least three examples were still around and working well into the 1940s. Nevertheless, there is a Dodman cylinder slide-valve cover in existence, that was sold at the Tom Paisley sale on October 1st, 1980. 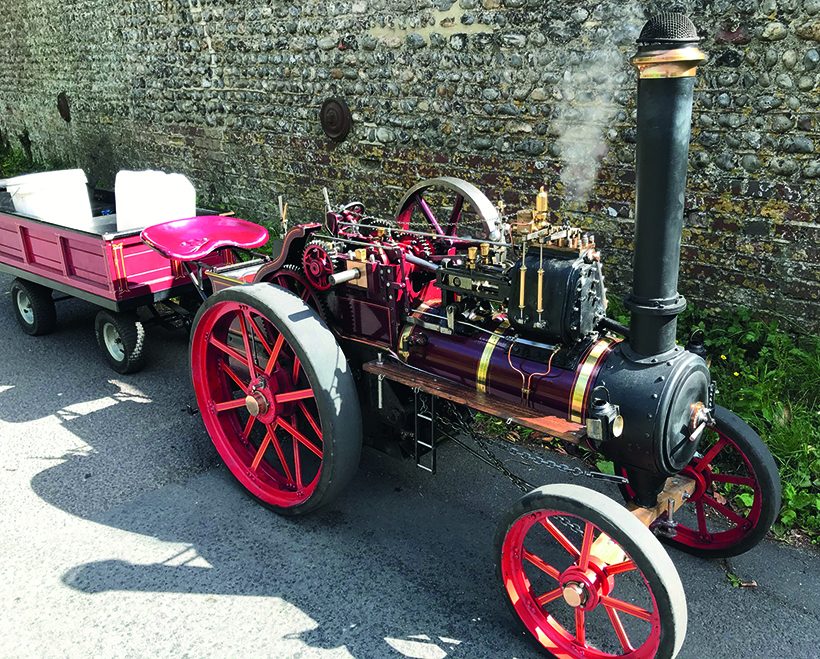 Merv says the engine has plenty of power. The wooden-covered front axle is shown here.

I recently took the engine on a four-mile road run around Yapton, accompanied by my good friend Dave Edwards and his Live Steam Models 4in Burrell single-crank compound, which he built from their castings. It took him around four-and-a-half years to build, and he finished it in 2018; it’s certainly just the ticket, inside and out. Dave’s family had full-size steam engines years ago, and his uncle – Charlie Russell – owned one of John Sparks’ engines; the 1886 6nhp Marshall No. 14421, a genuine convertible. 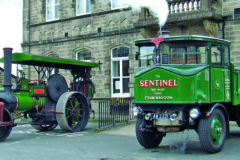 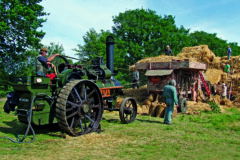