Peter Love jumps at the chance to test drive an original, 1973 Massey Ferguson 168 on the Long Mountain Road Run in Shropshire. 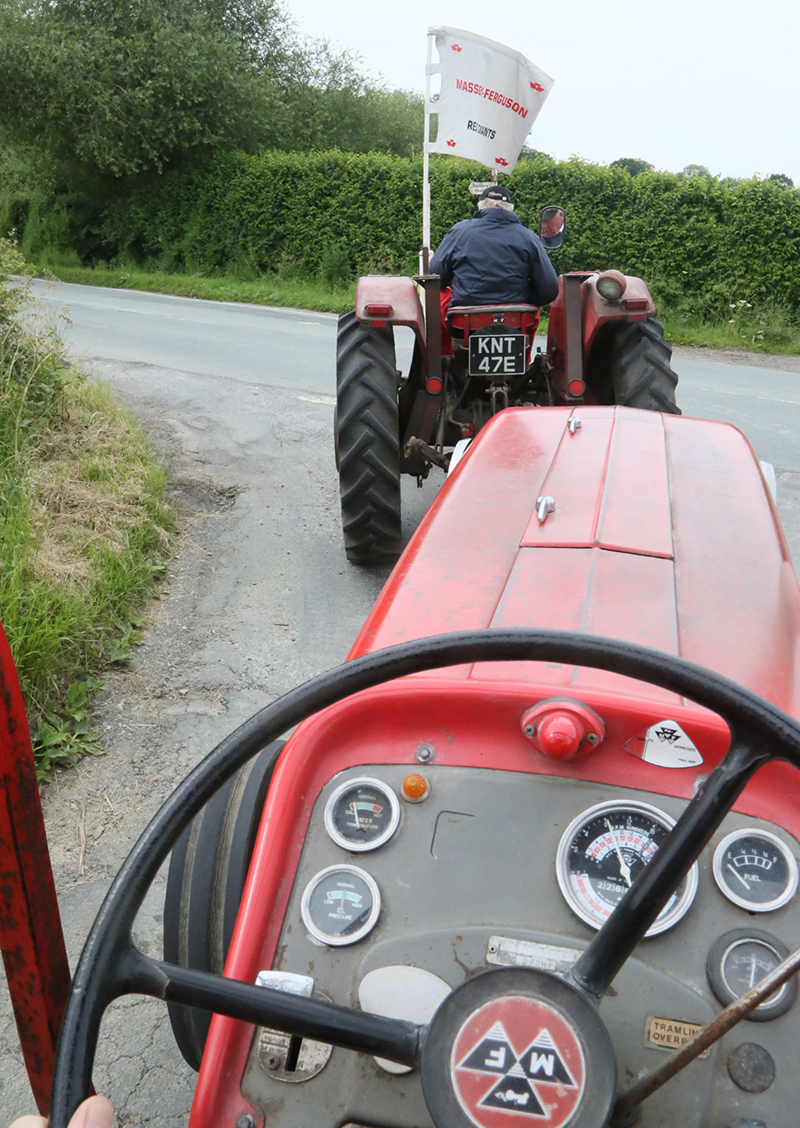 It all started when Richard Sherratt left a message on my phone, inviting me to take part in, possibly, Roy Edwards last Long Mountain Road Run last June. He offered me the chance to drive his original 1973, Massey Ferguson 168 for this borders event, and I gladly accepted.

Wow! What an enjoyable day I had on the MF 168; I learnt so much about its heavy-duty front axle

This example came to Richard’s collection via a friend who put him on to it while it lay in an open-ended barn in the Cotswolds. It had been stored there 20 years and, unfortunately, the Flexi cab fabric had been all but destroyed, unlike the rest of the tractor. When it arrived with Richard, he got rid of what was left of the fabric, as the Flexi frame was excellent. He power-washed the whole machine, carefully changed the oil and various filters and inflated the tyres; the rears were sadly cracked in places, but weren’t dangerous and didn’t need changing at that stage. 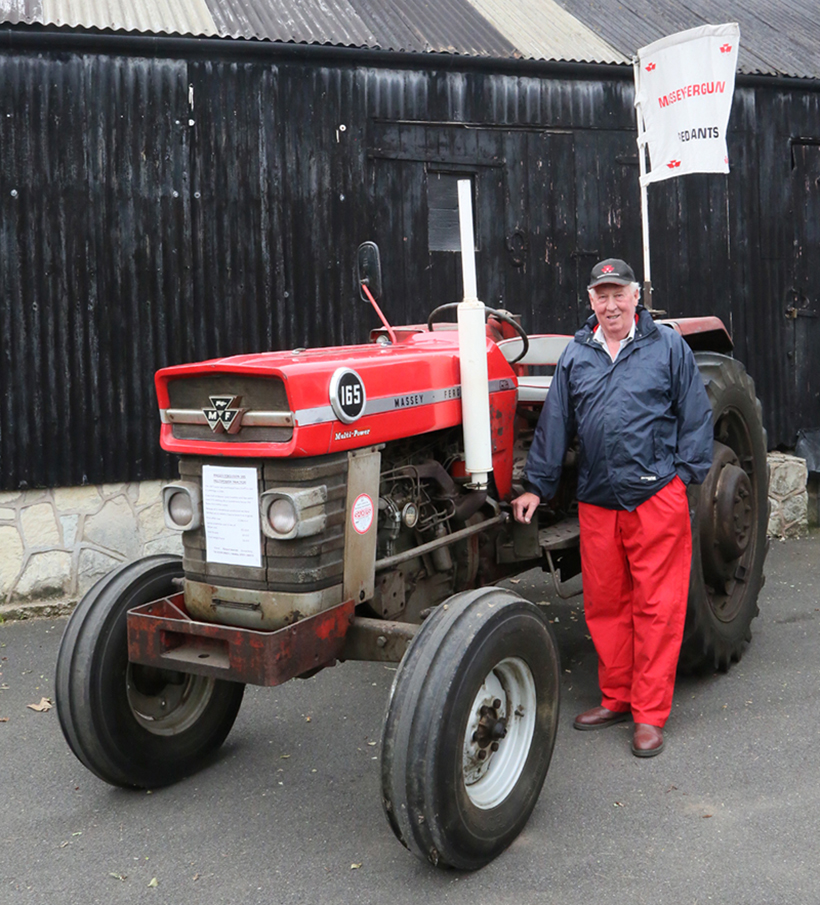 Having driven a MF 165 Mk1 before, similar to Richard Sherratt’s personal steed for this run, I was reasonably familiar with the ‘Super-Spec’ 168. However, like the 165 Mk2, it carries the Perkins A4-236, 3.9-litre 69hp engine, not the earlier AD4-203, 3.3-litre 58hp unit. This was used in the 165 Mk1, and that extra 10hp was very valuable at times. Climbing on to the tractor was easy, thanks to the 6in spacer fitted in the transmission area, giving it more length and helping with overall stability.

The ignition key is on the right of the lower consol, and was to become the bane of my life; it just wouldn’t stay in the keyhole, and even became lost for a while! However, it finally came good on this, one-working-owner-from-new tractor, which had all the original documents. 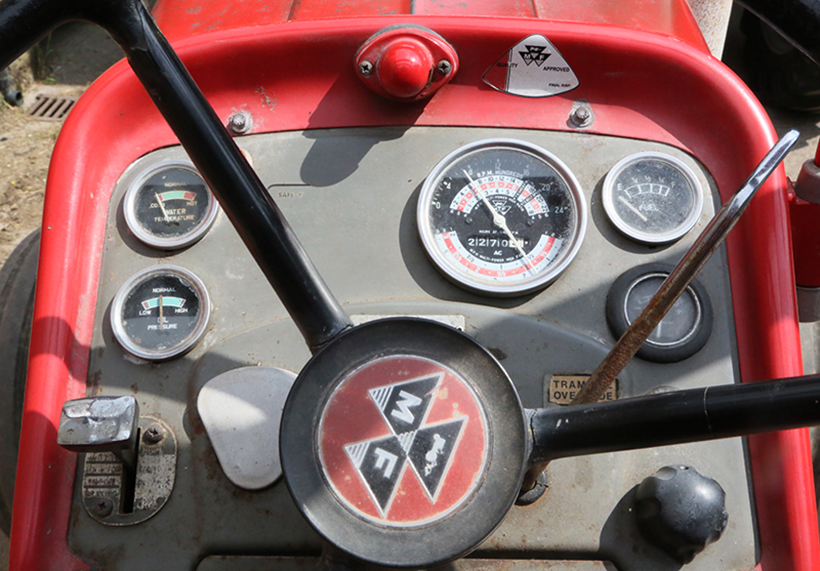 The Girling, five-plate disc brakes felt good as I pressed the pedal and the handbrake lever, all part of the original standard package that worked well and didn’t pull my arm off – in other words, it didn’t need adjusting. It was 8am and we were ready to leave as we took to the Shropshire roads for our own personal road run to the start, some 15 miles away at Grange Farm, in Westbury.

Power steering
This 168 model featured power steering which, in 1973, was a £121 extra, according to the leaflet I have here. It’s much friendlier to use than John Deere’s contemporary offering, which is a touch too sensitive for my liking, and demands lots of concentration if hedges are to be avoided! Not so with the 168, which was lovely by comparison. Off we went with Richard leading with his 1966 165 Mk1, which spent its working life in Sweden, and was a good purchase from Cheffins about 10 years ago. 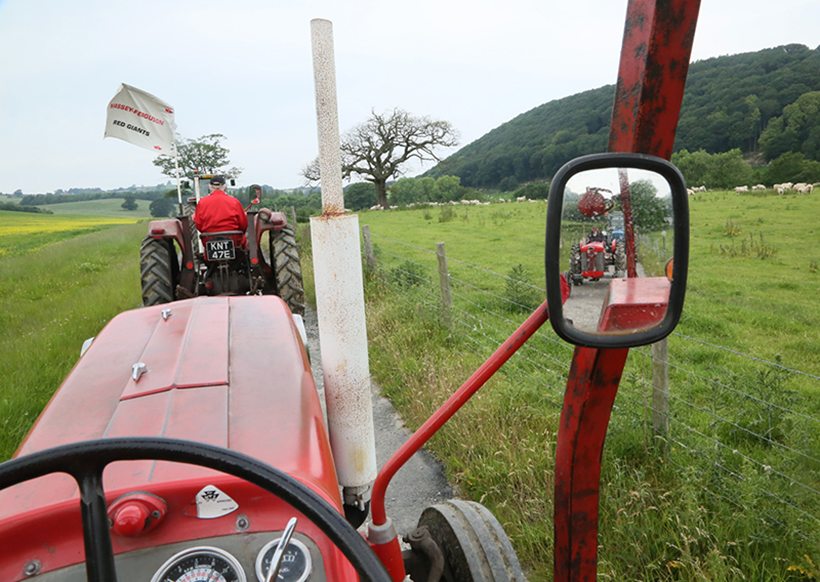 With Massey Fergusons front and back, there’s no escape from the red ‘things’!

The transmission on this 168 is the standard, six-speed with two reverse and Multi-Power, giving you 12 speeds and four reverse. There was also an eight-speed option as well. However, I soon realised that those 16.9×14-30 tyres didn’t do much for the tractor’s road ride, but I was helped by the sprung seat that was all part of the 8 ‘Super-Spec’ set-up.

The tractor was used with a sprayer on the Cotswold farm; tyre spread is helpful for traction, and that’s what you get with the 14-30 tyres fitted here. We made good progress around the wide back roads, enjoying travelling mostly through farmland. The 168 was in its element, even if the weather didn’t look very good at this stage although, for a while, the sun did come out as we neared our destination.

Road speeds
I don’t have the specification for the road speeds with 14-30 tyres, only for 12-36s but, in top (12) and with Multi-Power, you are supposed to achieve 18.8mph, which I would say isn’t what I could achieve safely with the smaller diameter tyres fitted to this machine. 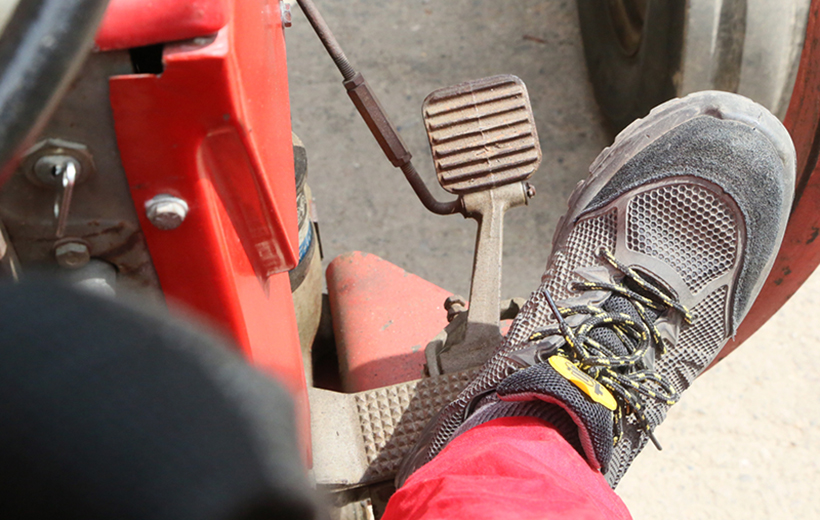 That foot throttle is a good thing, and something I like on all the 100 series range

My own Wax travel app, running from my phone and which I trust, showed 17.2mph, and looked to be the speed the tractor cruised well at in Multi-Power, which I found no difficulty to engage. However, it’s no good when the speed drops off, when following other tractors, but the standard transmission has bags of torque. The Multi-Power runs off its own, powerful ‘Super-Spec’ auxiliary pump, that worked away very quietly.

Once we arrived at Westbury we joined in with all the fun going on at Grange Farm, owned by Tim and Caroline Jones. There was a good range of original MFs in attendance, as well as other makes.

A relaxed pace
After the safety instructions had been given for the day ahead by organiser Roy, we headed off on the run at a slower pace than Richard and I had been achieving on our way to the start. However, it gave us more time to enjoy the countryside and the area we were travelling through, thanks to various farmers and owners.

The 12in, single-plate clutch of the split-torque type was a joy to use along the way. The tractor carried on smoothly and I engaged the differential lock ­– standard on this model – and it certainly locked things in well as we climbed the many hills on the way to Long Mountain and Lords Buildings. Here we were able to enjoy a superb lunch, and reflect on the merits of the 168, which I grew to like the further I travelled with it. 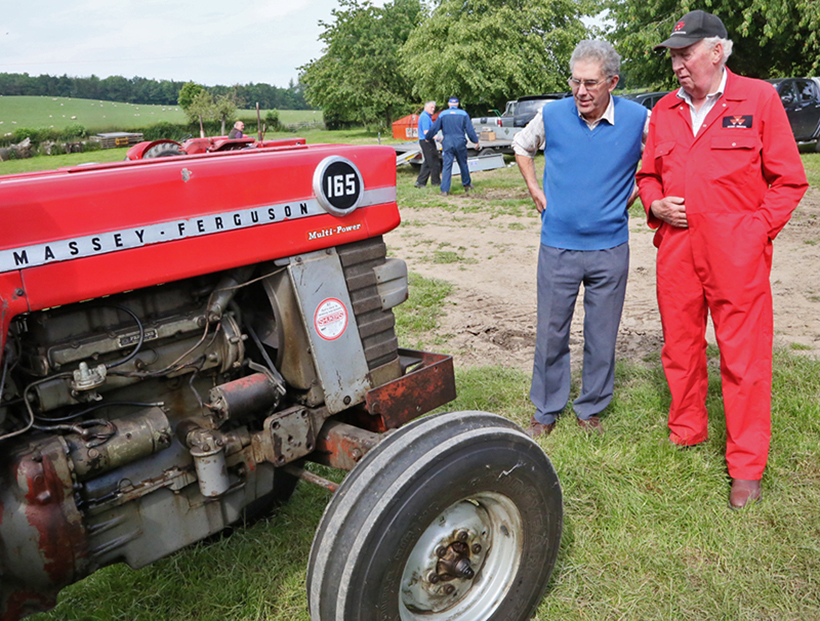 Richard Sherratt admires his original 165 Multi-Power with a friend

The powerful PTO
Looking around the tractor, I remembered that the powerful PTO is a proper, fully-independent unit with its own clutch and safety brake – a major feature on the 168. The hydraulics are boosted by a high-capacity pump that increases oil flow to 9.4 gallons per minute, at 2,000rpm. There are plenty of spool valves on the tractor plus, on the n/s wing, a trembler box with power for the sprayer arms to work from, although they won’t be needed again one feels!

Then the heavens opened so it time for the plastic rain coat and trousers as we got ready to head down the mountain. It was going to be interesting with all the rain, that’s for sure.

We thanked Roy and his family for all their hard work and he gave each participant a lovely, David Brown ‘Primrose Red’ 990 decorated sponsored mug as they headed off. After 10 miles, the rain eased thank goodness, and we headed back on our own again, as the others returned to Westbury and their trailers and lorries. 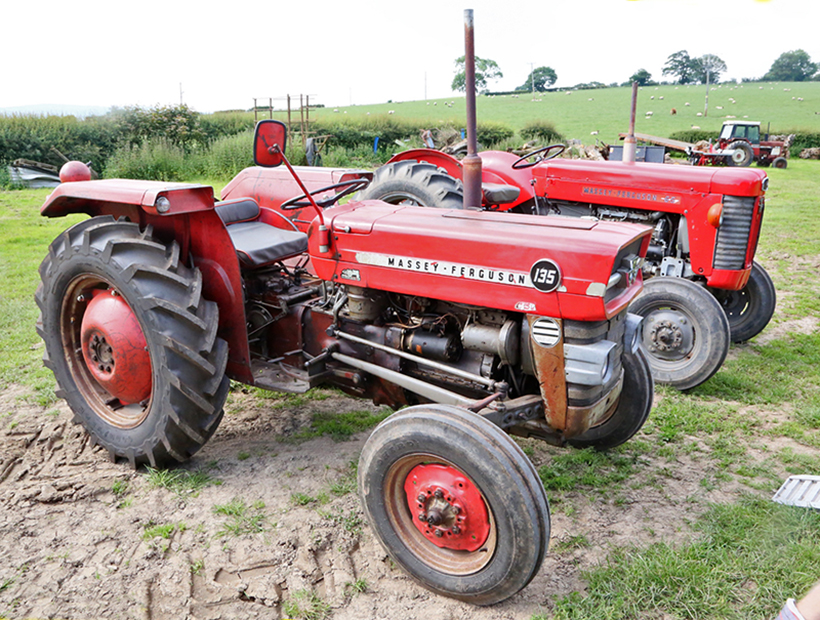 There were some lovely, original early MFs on the run, including this 65 Mk2 and an early 135 Mk1

I discovered a veteran Aveling Barford i/c 8-ton road roller in a yard by a crossroads. I stopped to take a photograph without creating a traffic jam, then headed off to try and catch Richard up again, which I managed successfully.

We travelled some distance on a busy road, so kept tight into the kerb, allowing people to overtake more easily, then turned back on to a quiet, country lane and, before I knew it, we were back on home territory at Richard’s house. What a day it had been!

The tractor has been treated with Otwald fluid, which will keep the paintwork (and rust) protected. I lined it up in the yard as we headed for a cup of tea and a chat about the day, before heading out on the road again for a final photo shoot with this original, award-winning 168. 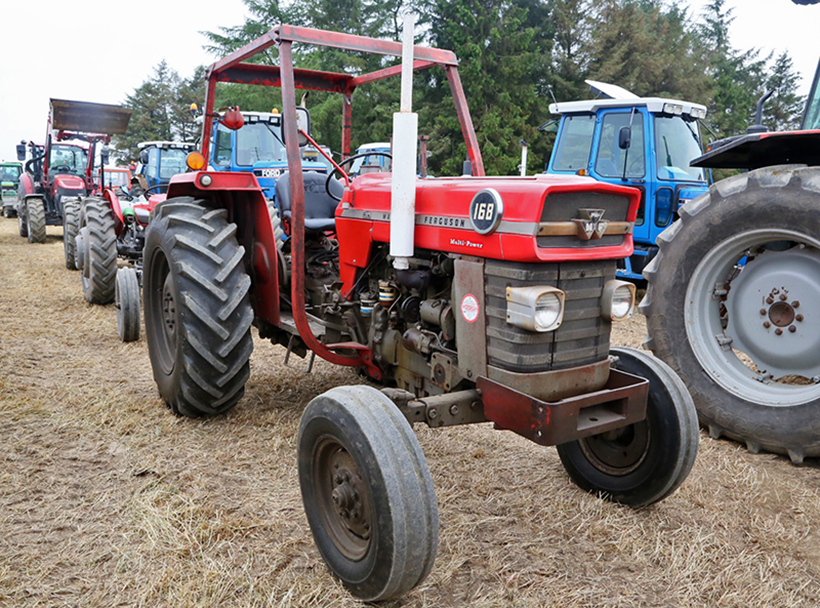 It had been a privilege to be allowed to drive the tractor on the road run, which is also very economical on its white diesel. It didn’t get hot (overheat) and was as good as gold all day – I was nothing but impressed so many thanks, Richard! 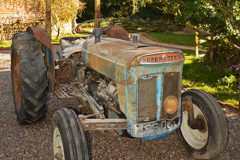 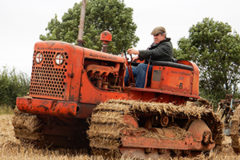