William Houston owns a 1958 Thames 300E van which, amazingly, has just 310 miles on the clock. Bob Weir tells the story. 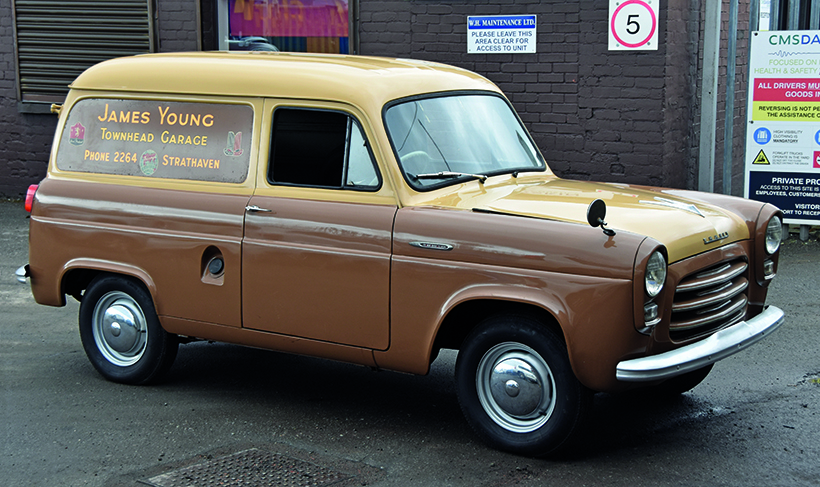 1958 Thames 300E van: The paintwork has stood the test of time well, even though the vehicle has spent most of its life languishing in various garages.

Motherwell is located in the heart of Scotland’s Central Belt. The town used to be known as Scotland’s steel capital, until its decline in the 1980s. Nicknamed ‘Steelopolis’, the giant steelworks at Ravenscraig dominated the local landscape, before its closure in 1992. This rich, industrial heritage is probably the reason why a large number of old commercials keep popping up out of the woodwork, and the area has become something of a treasure trove for Scottish classic vehicle enthusiasts. William has lived in the area all his life and is an engineer by profession. He’s been interested in light commercials for many years, and in addition to his amazing 1958 Thames 300E van, he owns several other interesting vehicles. 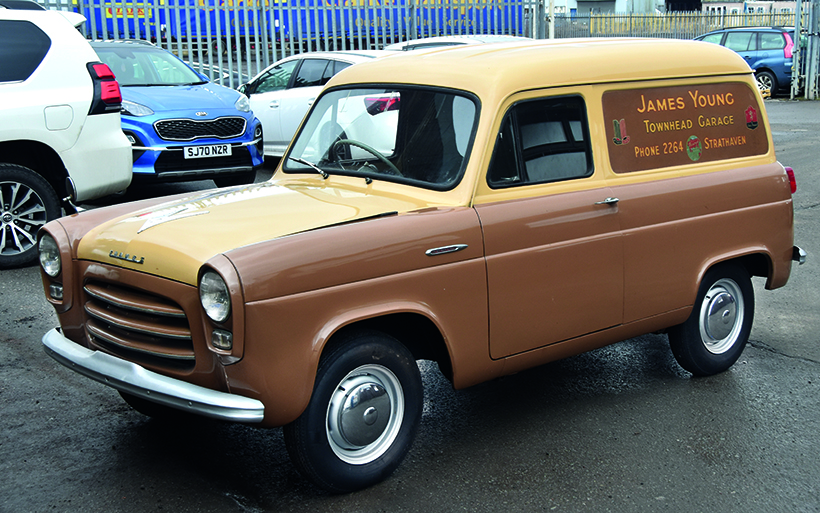 If you wanted a Ford dealership back in 1958, a service van was part of the package.

“I served my apprenticeship as a turner fitter, so am used to working with tools,” he explained. “I’ve always been keen on classic commercials, and the first vehicle I acquired was a Fordson E83W. When I first got the van it wasn’t roadworthy and needed a lot of refurbishment. Fortunately, my son and I managed to fix the mechanics and repair the bodywork. Bearing in mind its age, the van is in good condition and is now a runner. The vehicle has also starred in some period television dramas.” 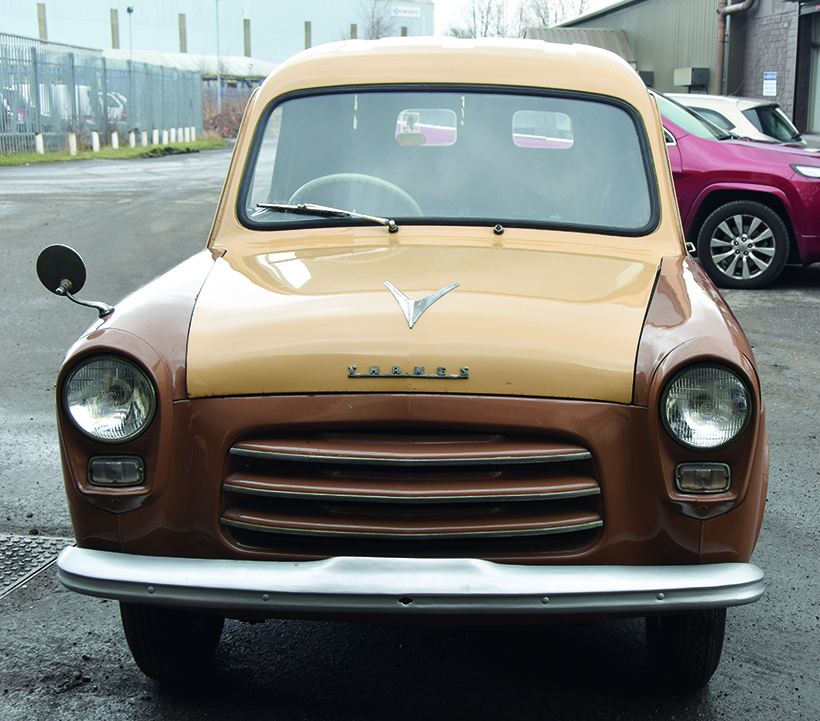 The 300E at William’s former business premises. He now uses the space for storage.

Apart from the E83W, William also owns an Austin A55 half-tonner van and Ford Pilot pick-up. “The Pilot pick-up is interesting as the vehicle was only ever marketed as a saloon in the UK,” he told me. “Apart from some vehicles assembled by Ford Australia, the few surviving pick-ups were all private conversions.”

The Thames is a recent acquisition, and William heard about the vehicle through his local network of contacts. “The van was originally new to Townhead garage, in the nearby town of Strathaven,” he explained. “The garage was located on the main street and the story goes that the owner, James Young, was keen to acquire the local Ford dealership. Part of the deal, was that the garage had to buy one of Ford’s service vans.” 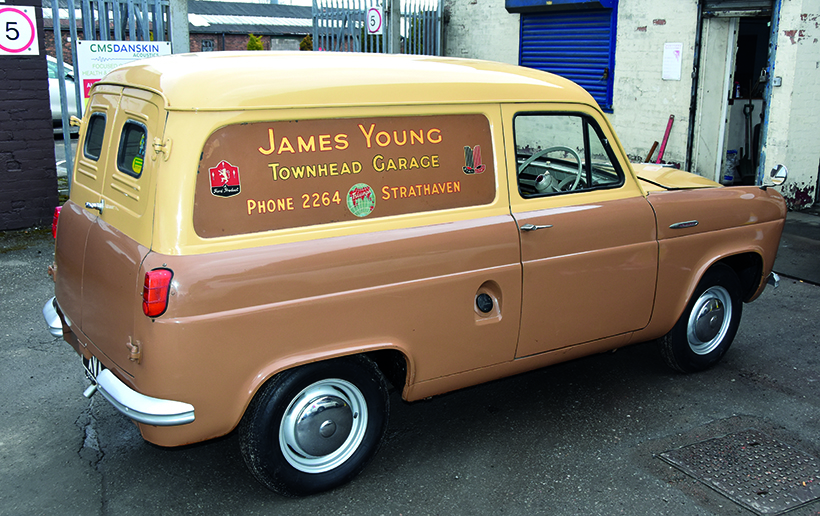 The 300E was a best seller in what was a very competitive market.

Service vans had a dual purpose in the 1950s. They were used as a runaround, and to advertise the garage’s name and contact details. They were often worked hard, and so survivors are rare. This particularly applies to vehicles with low mileages. “Townhead garage was also the local dealer for Standard Triumph vehicles, and Mr Young already had one of its vans in service,” said William. “Unfortunately, Ford insisted that the 300E was part of the dealership package, and one can only assume that the contract was worth the trouble and expense. Having got the van, Young dutifully painted it in the garage colours and stored it away for the next 30 years. I’ve been told the vehicle wasn’t even registered for road use.” 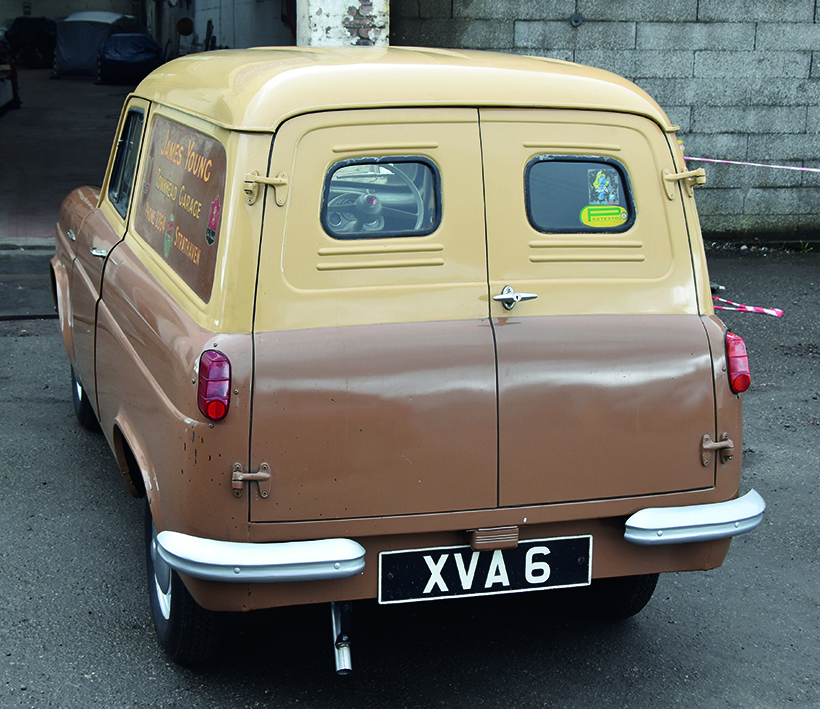 The registration number is local but is believed to be age-related. It could probably fetch a pretty penny in its own right!

Luckily, the history of the van is well documented, which adds to the vehicle’s provenance. “The Thames was eventually given to James Louden, a friend of the family, in 1980, and he decided to apply to the DVLA for registration,” William explained. “By this stage, the van was still only showing 300-odd miles on the clock. ‘VA’ is an old, Lanarkshire number, although it’s safe to say that this is an age-related plate.” 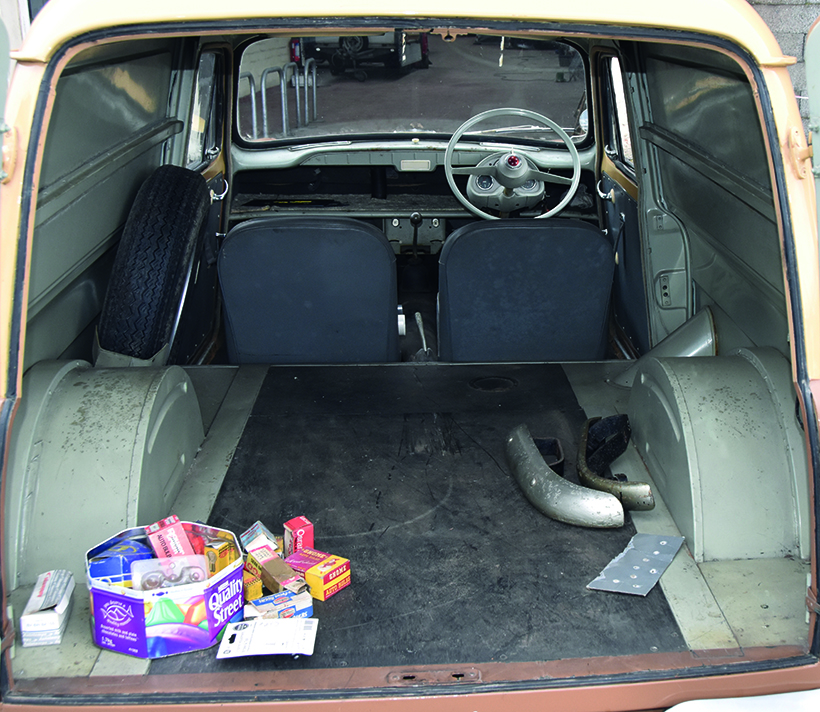 The amount of load space was a crucial factor in a late 1950s van, and the Thames was on a par with most of its competitors.

Although Mr Louden went to the effort of registering the Thames, he never got around to driving the van and it was stored away again for several years. He eventually sold the vehicle to a local enthusiast, the late David Bowman. “I’d known David for years, and had bought several vehicles from him, including the Pilot and half-tonner,” said William. “Although I only acquired the Thames from his estate in 2020 after David had died, I knew that he was determined not to add to the vehicle’s mileage. By this stage, a van showing only 309 miles on the clock was something of a rarity.” 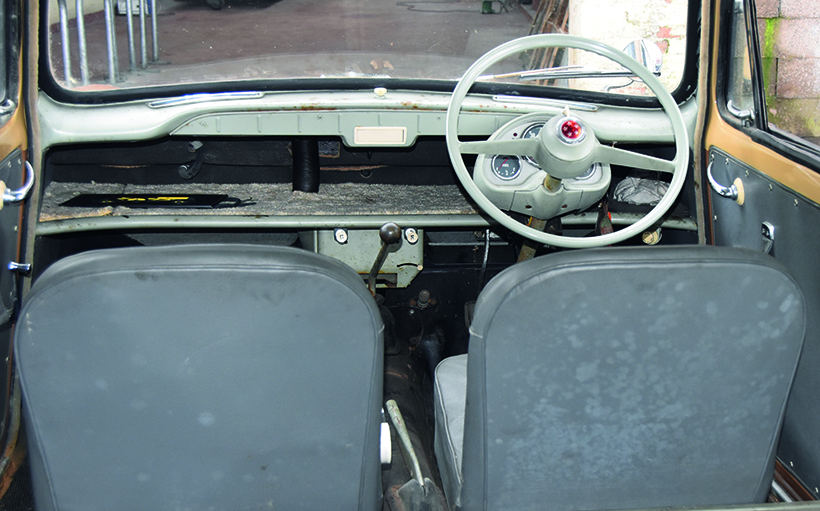 There were few creature comforts in a 1950s van, but at least the 300E had modern styling.

When William acquired the van, it was in very good condition, apart from some lighting issues. “When I finally bought the Thames last autumn, it was missing some of its light bulbs,” he explained. “I’ve been told these were likely borrowed sometime in the past to use as spares. Fortunately, replacements are still readily available. 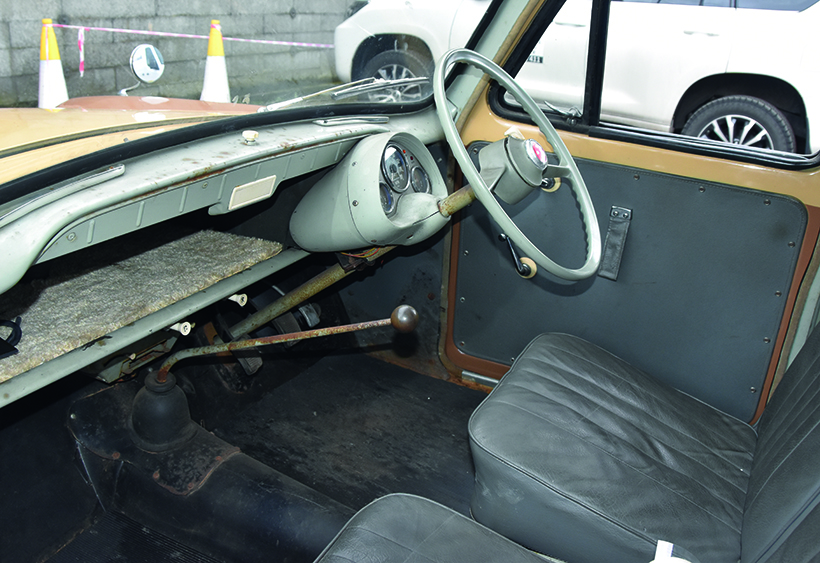 Although the cabin could do with a good spruce-up, it has stood the test of time.

“Although the van had spent virtually all its life in storage, I was expecting some level of deterioration. Much to my surprise, though, the engine bay was immaculate; you can still see some grease and wax on the inside of the bonnet. The interior of the vehicle – including the cab – was obviously a bit dirty, but there was no sign of rust. Rust was the nemesis of light commercials of this generation, and the main reason why the majority ended up on the scrapheap. There are a few bits of trim that are starting to show their age, but the work needed is mainly cosmetic.” 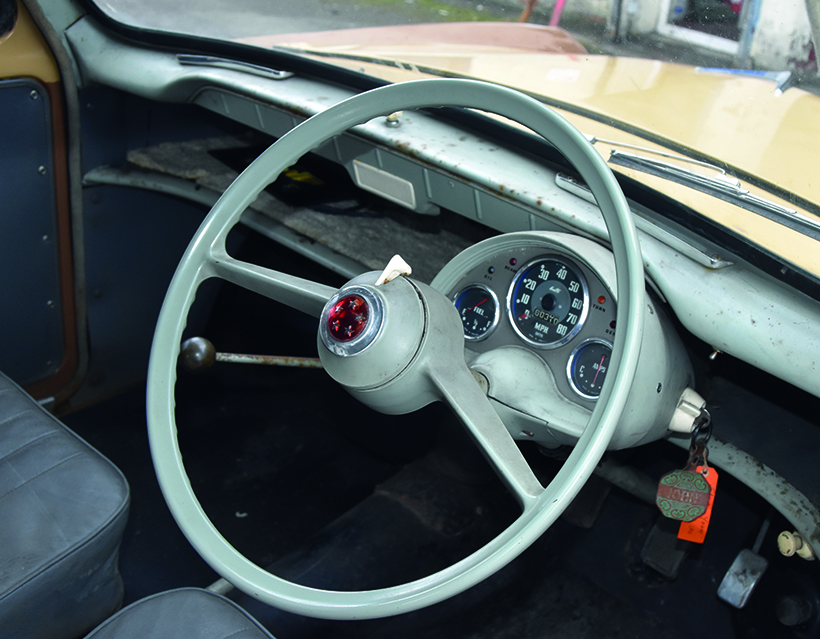 Driver’s instruments were also at a premium, but the van’s dashboard is in remarkably good condition.

The Ford Thames 300E was built by Ford UK between 1954 and 1961. Launched under the ‘Thames’ banner, the Thames name was used for all commercial vehicles made by Ford until the arrival of the Ford Transit, in 1965. The brand had originally been dubbed Fordson Thames until 1957, when the description reverted to just ‘Thames’. The new commercial was a major improvement over Ford’s existing Anglia and Prefect models, which had been around since before the Second World War. 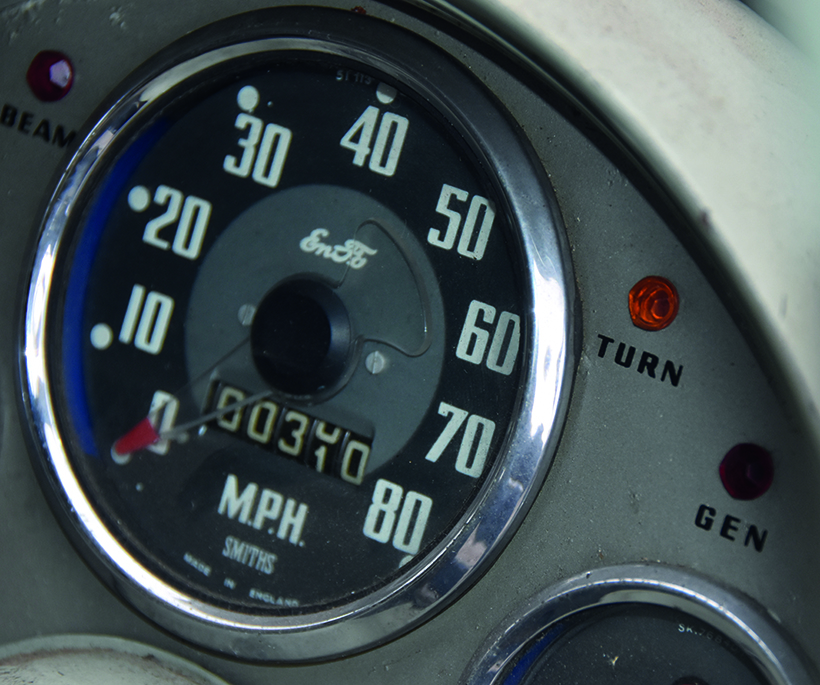 The odometer still reads a genuine (and incredible!) 310 miles. According to William, the extra mile clicked over when he was loading the van onto his trailer!

Ironically, the upmarket Squire’s bodyshell had been configured as a panel van, and this included the two passenger doors. The van also shared the car’s front body panels, although both estate and van versions were slightly shorter than the saloons. 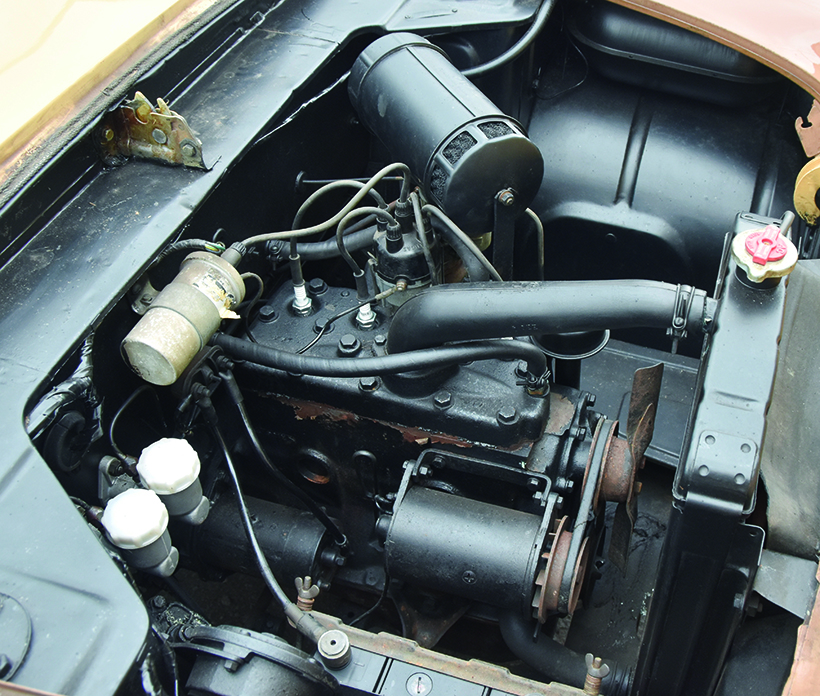 The engine bay also looks in A1 condition.

The early and best-selling 5 cwt version of the van had a load capacity of 560lb (254kg), although the range was subsequently expanded to include Standard and Deluxe 7 cwt (784lb; 356kg) versions. The Deluxe version was upgraded with the trim from the higher specification Ford Prefect car.

All three models offered the same 66 cu ft (1.9m³) load volume. The van was modern in appearance and featured a one-piece windshield. Production eventually totalled 196,585. The breakdown was 138,467 units for the standard 5 cwt version. In addition, the company sold 10,056 Standard 7 cwt and 47,562 Deluxe 7 cwt vehicles. 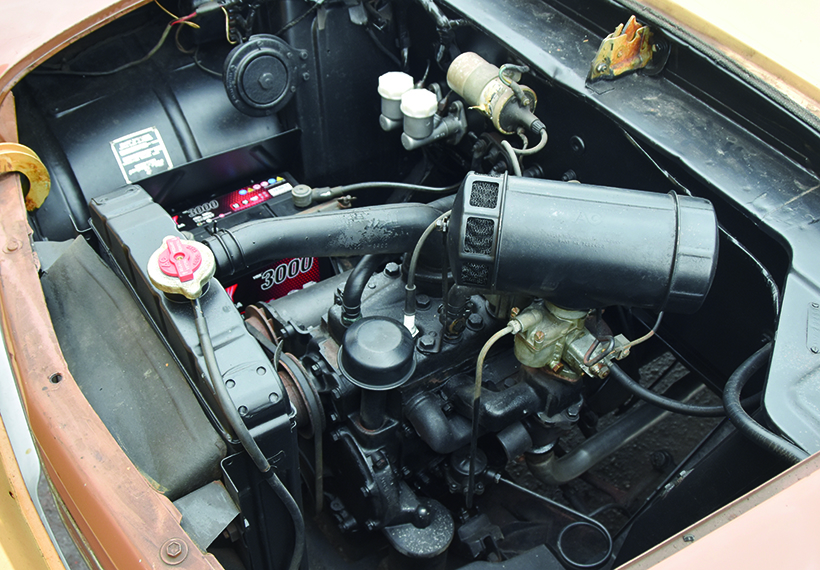 According to William, the engine ticks over OK, but he has no intention of taking the van out on the open road.

Both van and cars were very popular and strong sellers during the late 1950s. Production ended in April 1961, and the cars were replaced by the latest Anglia 105E saloon. The van version was called the Thames 307E, and was introduced in June.

William is a keen restorer and used to handling tools. “I like to do a lot of the work myself; I find it a relaxing way of passing the time,” he explained. “I think it’s important to do some thorough preparation before you start a new project, though, because you’ll ultimately save money that way. This often means buying spare parts well in advance. Fortunately, I have my own tools and workshop, and can carry on the work out of the weather. This is particularly important during the long winter months.” 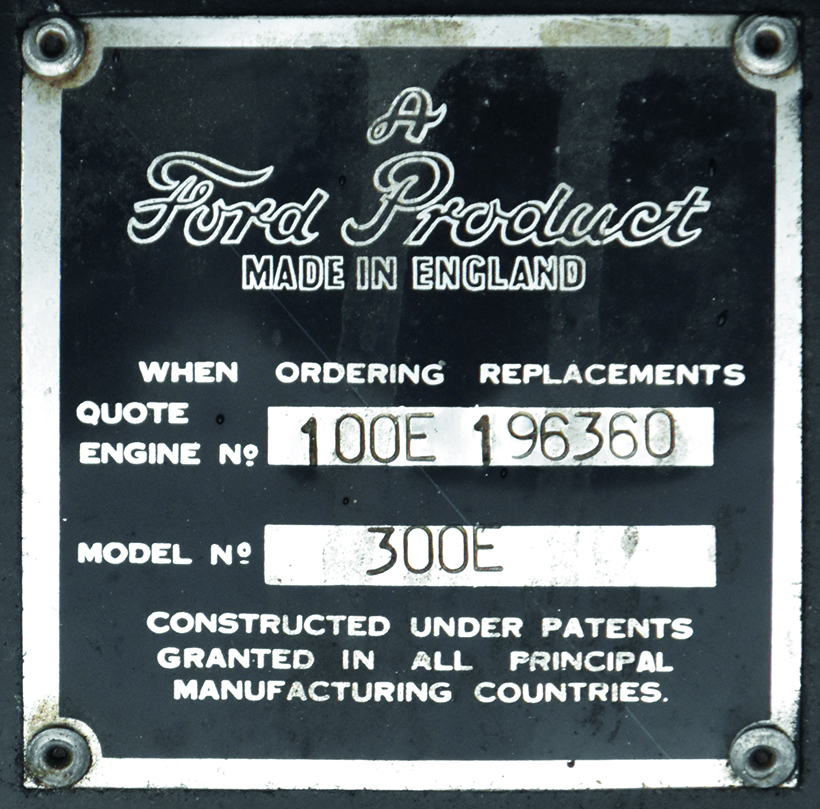 The Ford badge is still in good order.

William believes that the van’s miserly mileage was probably clocked up during its 1958 delivery from the Ford factory, although this is just speculation. What is certain is that he has no intention of seriously adding to the total.

“You feel a certain obligation to avoid racking up the miles after all this time, as vehicles of this age and low mileage are obviously uncommon,” he said. “I certainly plan to take the Thames to rallies in the future, although it will be ferried on the back of my flatbed! 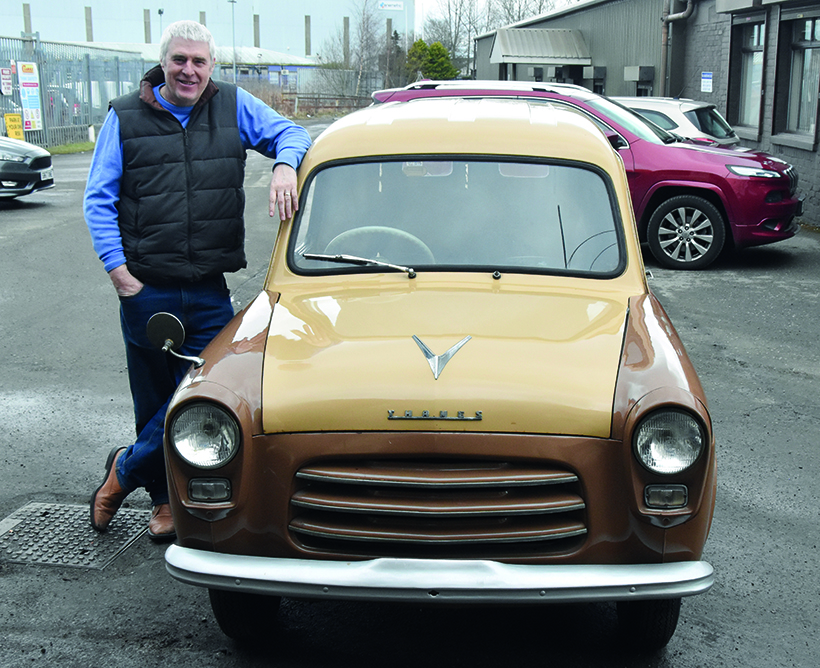 William Houston is a keen collector of old light commercials, and the Thames is in good hands.

“The vehicle might have to be moved on site to comply with Health & Safety, but this should be minimal. I’ve only added one mile on the clock to date, and am determined to keep the total as low as practicable. The 300E is a piece of living history, and I want it to stay that way.” 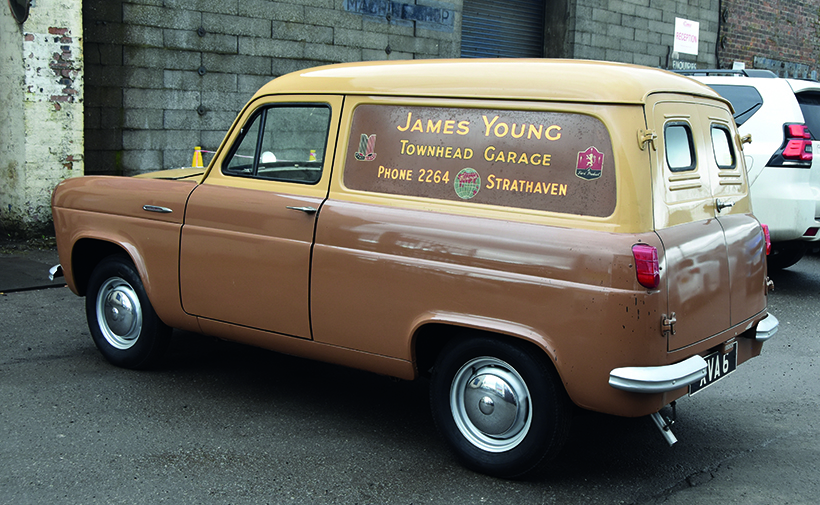 The van is still wearing its original cross-ply tyres, which adds to the vehicle’s provenance. 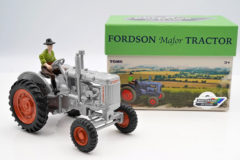 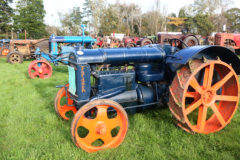 Best vintage sale of the year!