Tony Petch dips into the archives for a peek at the Australian domestic power supply industry’s interesting trucks. 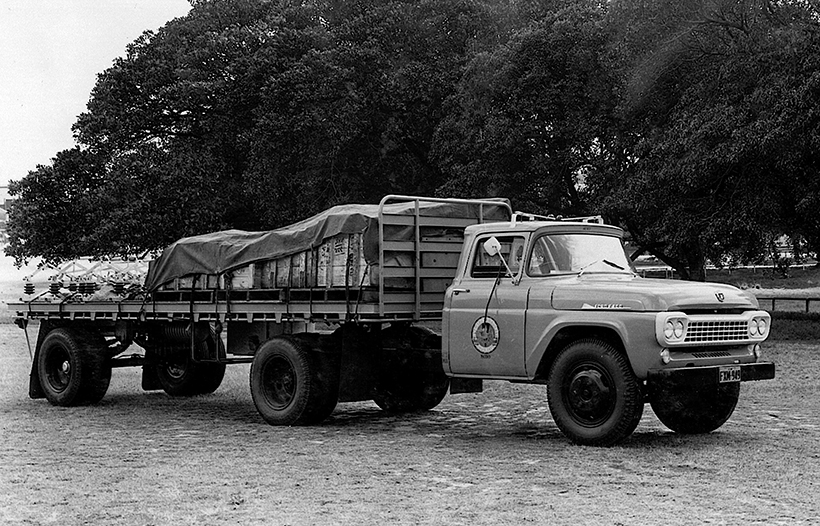 The Australian domestic power supply industry’s interesting trucks: Our intrepid photographer went to some trouble in October 1959 to find a picturesque background for this F series Ford, (registration number FXM 949) which, judging by the tank under the trailer, had vacuum-assisted brakes. The tarp job looks ‘a bit ordinary’, and one wonders why they bothered.

Electric power distribution is one industry that’s long relied on trucks of all sizes and configurations, to transport everything from large transformers and sub-station equipment, to the distribution of stores and many single-purpose tasks. 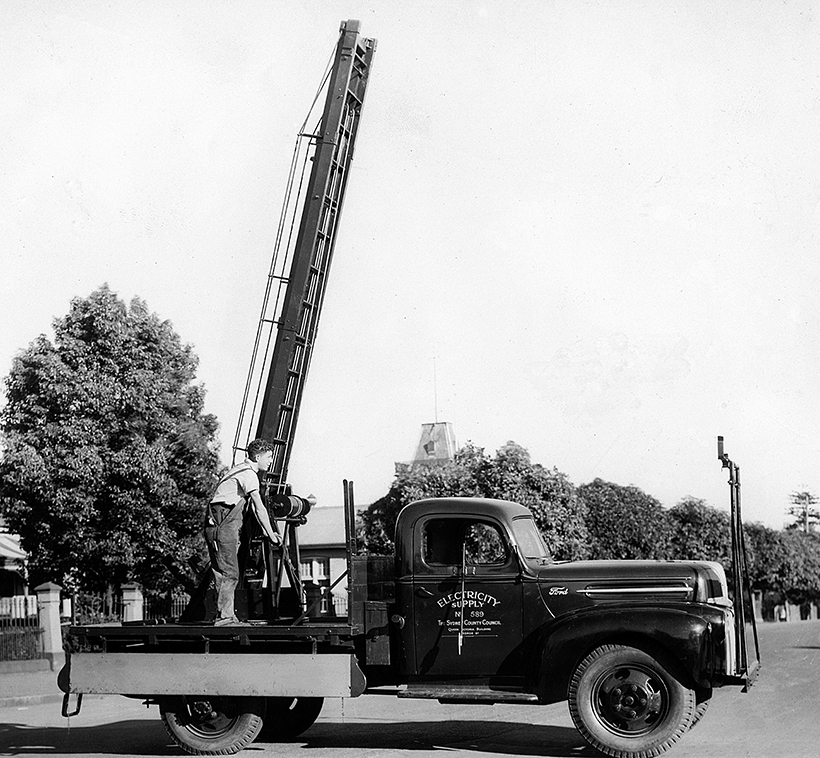 Now that’s what you call a real ladder! Judging by the vintage of the Ford that it is mounted on, (Plant No. 589), it’s the precursor to the hydraulic aerial platforms that are the standard of today. Interestingly, the administration address on the door is Queen Victoria Building, George St, which is one of the main streets in Sydney. (Pic: WA Webber Photography/Tony Petch collection)

In the state of New South Wales, the earliest supplies of power to the capital, Sydney, and its inner metropolitan area, were handled on a local council basis. But this ultimately became too unwieldy, and was replaced in 1936 by the Sydney County Council (SCC). As the SCC spread its services north and south of Sydney, trucks played an ever-increasing role. 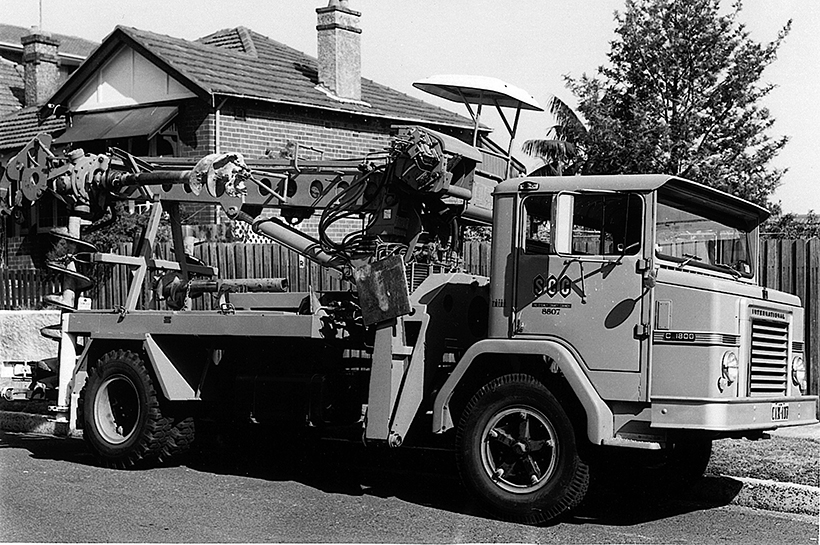 Many makes and models of trucks made it into the SCC fleet over the years, even the ubiquitous, Australian-designed and built International ACCO, originally introduced in 1961. By the time the axle-back version in this photo had been introduced in 1968, some 8,500 of the ‘butter boxes’ as they were generally known, had been made. This model 1820 having been issued with Plant No. 8807, and registration number CIX 107, posed for its official photograph in 1972. One would assume that it took over post-hole digging duties from the Bedford seen in another photograph.

Over the years, many different makes were purchased on a tender basis and, while there were some US-sourced vehicles, British breeds dominated the SCC fleet. However, our ‘home grown’ RFW did manage to supply five Caterpillar-powered 4×4 trucks with aerial ladders during 1984/85, for power line-associated maintenance duties, plus one Cummins-powered 6×4 chassis for the fitment of a small crane, in 1991.

This FWD, (Plant No. 2221), was probably ex-US Air Force surplus stock, and would have been an unstoppable machine with its all-wheel-drive and thirsty Waukesha petrol engine when photographed in 1948. Note that the winch cable is left connected to the loading ramp on the trailer, even though the truck is ready to move onto the next job.

By 1990, the SCC had become known as Sydney Electricity, and had a greater focus on business, marketing and identification with its products and services. The logo with the letters ‘SCC’ in the filament area of a stylised light globe introduced at that time, was a clever and endearing piece of marketing imagery. 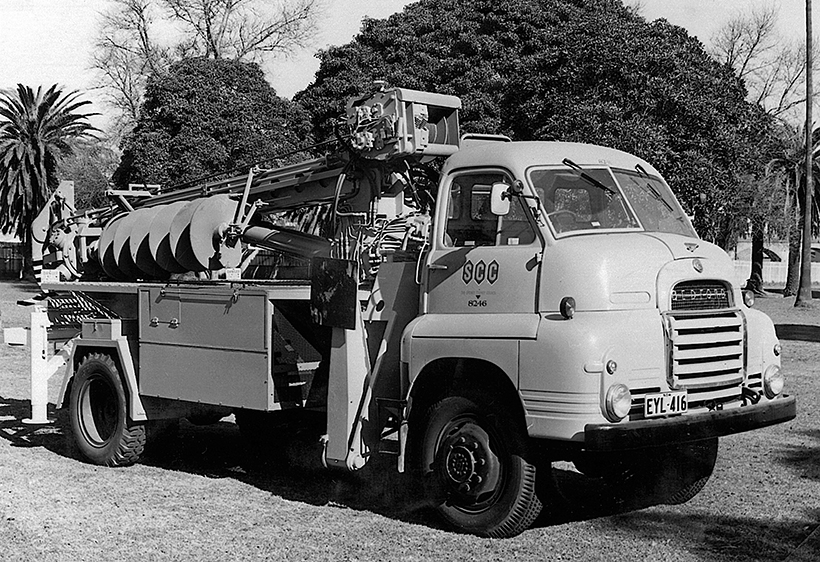 The specification sheet on the Australian Bedford model RLHC assured buyers that the truck is, ‘Your best investment for ‘go anywhere’ operations.’ Quite a claim, and they backed it up with an impressive 12-month or 12,000-mile warranty! Plant No. 8246 was captured for posterity in 1968, equipped with its hole-borer and erector for electricity poles.

For many years, the organisation’s central maintenance depot was located at Pyrmont on the city outskirts but, in 1994, the workshop and fleet management operations were transferred to the western Sydney suburb of Homebush. In 1995, group corporatisation brought another name change – to Energy Australia – which now uses a combined fleet of approximately 1,900 vehicles and 500 plant units. 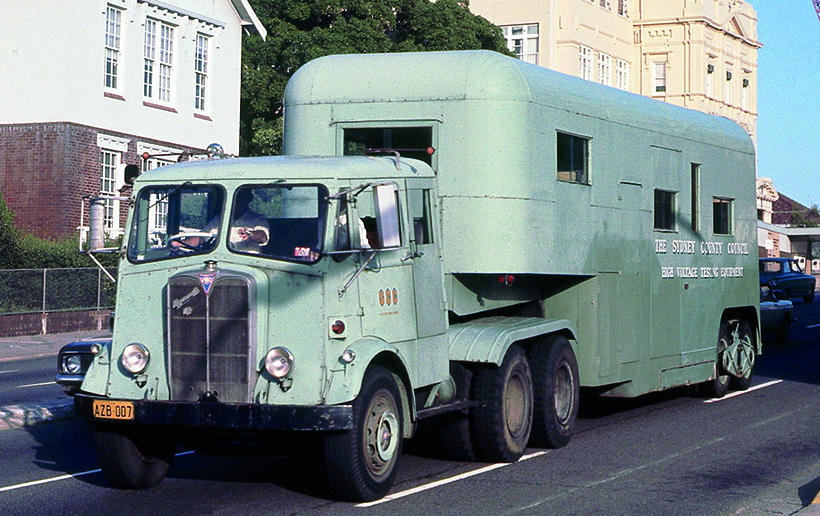 Another photo of the Mammoth Major captured on the move travelling along the Pacific Highway at Crows Nest, on Sydney’s north shore. Thursday, January 20th, 1972, was the day when our photographer was walking on the footpath and took this impromptu shot, and what a gem it is. Note the white steering wheel, the cigarette in the driver’s left hand and the letters missing off the Major badge. (Pic: Alan Travers/Tony Petch collection)

Special thanks to Gary Walsh, manager, Fleet Management, Fleet Services, who generously and trustingly allowed me to copy photographs from the Energy Australia archives, off site, and for his help with the information contained in this article, and not the least for permission to use those images for publication. 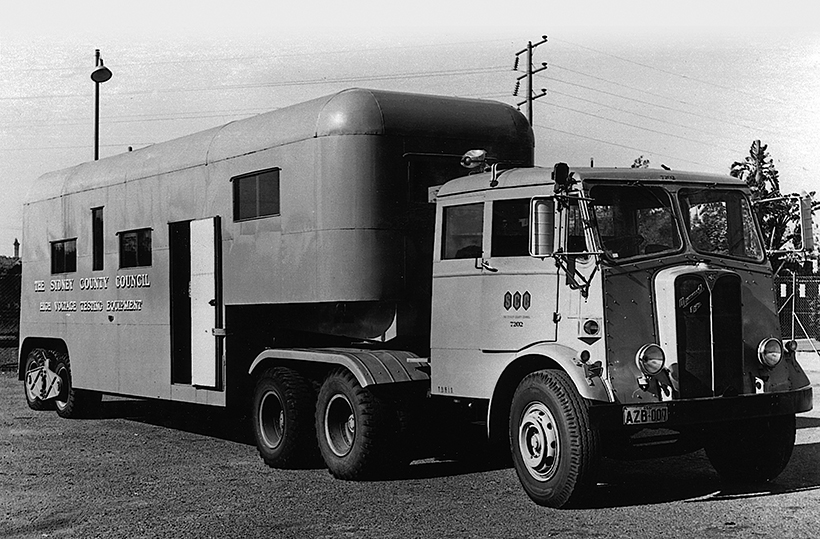 With its Hastings Deering crew cab, this AEC Mk. III Mammoth Major, (Plant No. 7202), and trailer make an impressive site. The trailing equipment was used as a mobile test unit for power failures in high-voltage underground cable systems. Note the bus-style mechanical hand indicator above the quarter window, and the large, west coast-style rear view mirrors; the latter being very unusual for a truck of that vintage, and would have been very much appreciated by the driver.

The SCC certainly went up-market when it purchased this Kenworth K-124, (chassis no. 108925), for the transport of its heavy transformers. Having received its registration number FVT.940, it’s seen here posing for an official photograph before the logo and plant number were put on the driver’s door. It entered service on October 24th, 1967, and was quite an unusual truck, even by Kenworth’s standards. The tractor unit was imported fully built up with its 86in crew cab featuring ‘suicide’ doors for the crew. It was one of only two Kenworths known to have been imported with Cummins NTC-280 engines, and the six-speed overdrive Allison HT-70 automatic gearbox would certainly have made life easier for the driver. Interestingly though, the auto was replaced with a 20-speed Spicer manual gearbox in 1979. Understandably, it was always considered the pride of the fleet. (Pic: Milton Kent) 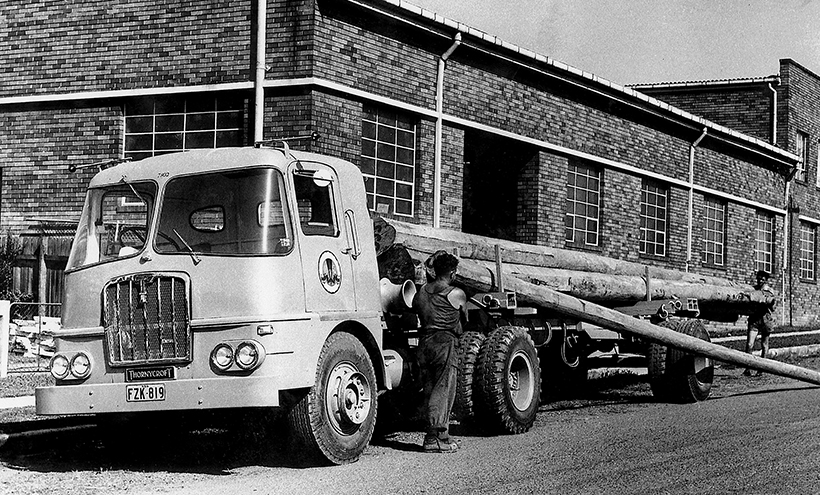 At the start of the sixties, Thornycroft managed to get their very latest version of their ‘cruiser weight’ truck, the Mastiff ML/QR6, into the SCC fleet. Using archival photos, it is possible to confirm that they bought three prime movers, and it is known that at least one long wheelbase rigid was also purchased. With their 9.83 litre QR6 diesels, developing 139bhp @ 2000rpm, five-speed gearboxes, (both of Thornycroft manufacture), and Moss rear axles, they were considered a ‘good performer’ in their day. Note the rearward extension of the fibreglass cab, seen here on Plant No. 7302, which was done to all the Mastiffs supplied to the SCC. This modification was made in Australia to the requirements of the County Council for the purposes of tool storage, rather than a crew cab. Their duties varied between delivering new poles to out lying yards, and towing single wheeled low loader trailers carrying anything from cable drums to small plant. 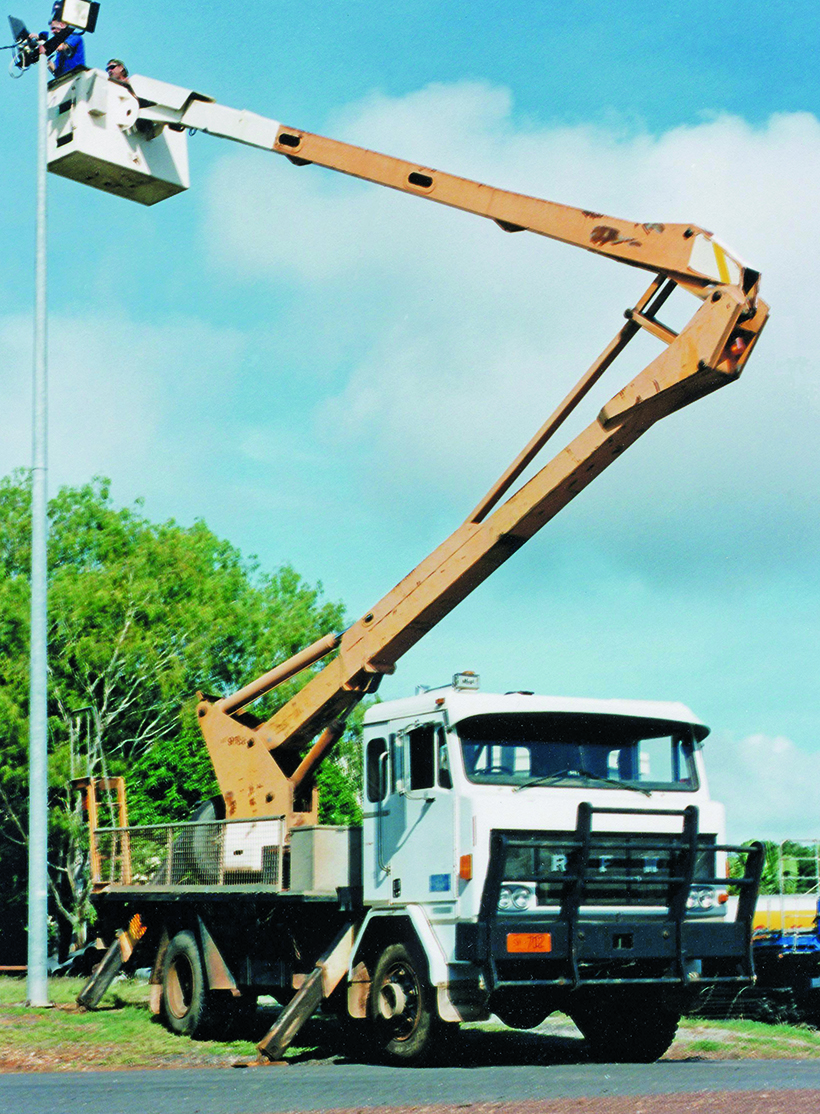 In 1984, RFW won a tender to supply five trucks to the SCC. September 3rd was the commencement date for construction, with the first unit being delivered on October 31st and the last unit delivered on March 8th 1985. They received consecutive chassis numbers, and the same drive-lines, with Cat 3208 V8 engines coupled to five-speed Allison MT653 fully automatic transmissions. In 1991, the SCC also purchased another RFW, (no. 2/337), which served its time as a small crane carrier. After eventual disposal, truck number one, (chassis no. 2/273), was photographed here in Darwin in November 1999, on its second life in the northern capital.
(Pic: Phillip Geer) 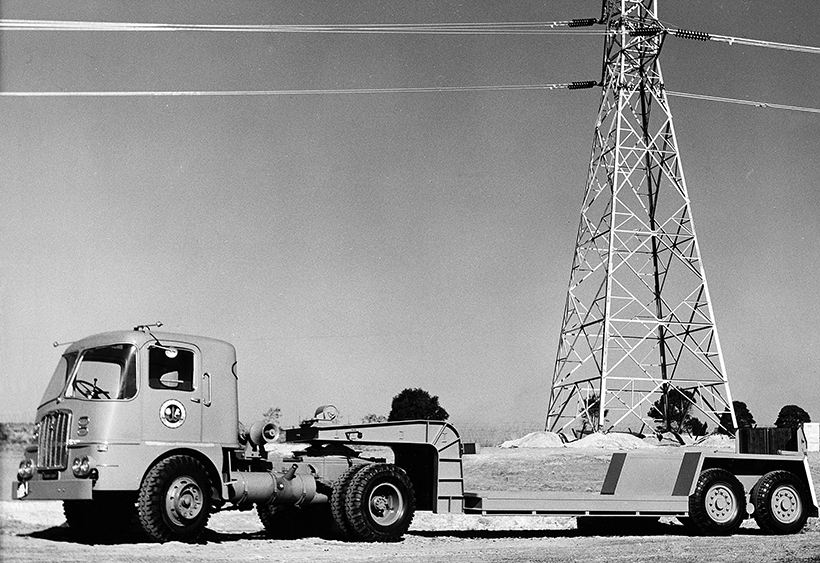 A brand new Mastiff strategically placed to emphasise the electricity connection with the mains grid tower in the background. The trailer looks brand new and would have been used for the delivery of cable reel drums. (Pic: Tony Petch collection) 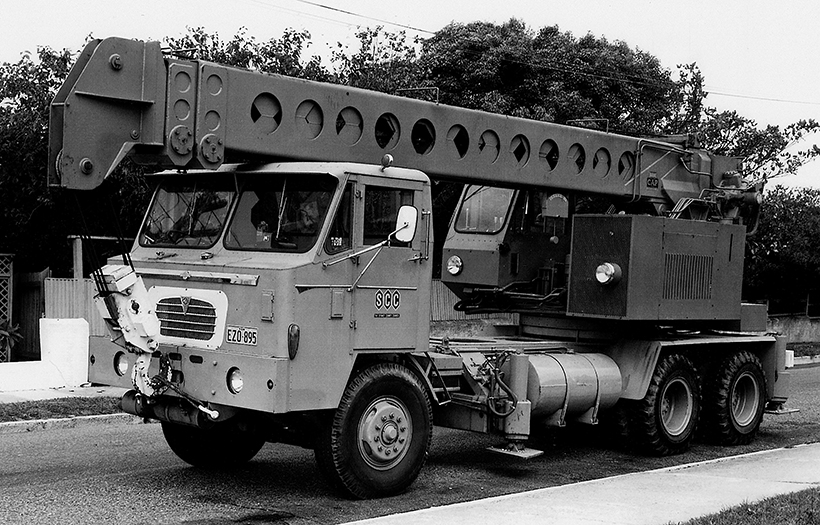 This AEC crane carrier featured a welded frame, with all assembly done at the Australian headquarters of AEC at Lidcombe, in western Sydney, from a kit and drawings sent out by the factory at Southall which was the basis of the type for mounting Coles cranes in England. The rear suspension was a solid beam type with M type double reduction axles. An 11.3 litre A223 engine coupled to a five-speed main and two-speed auxiliary completed the drive, with the cab being a Hastings Deering special. 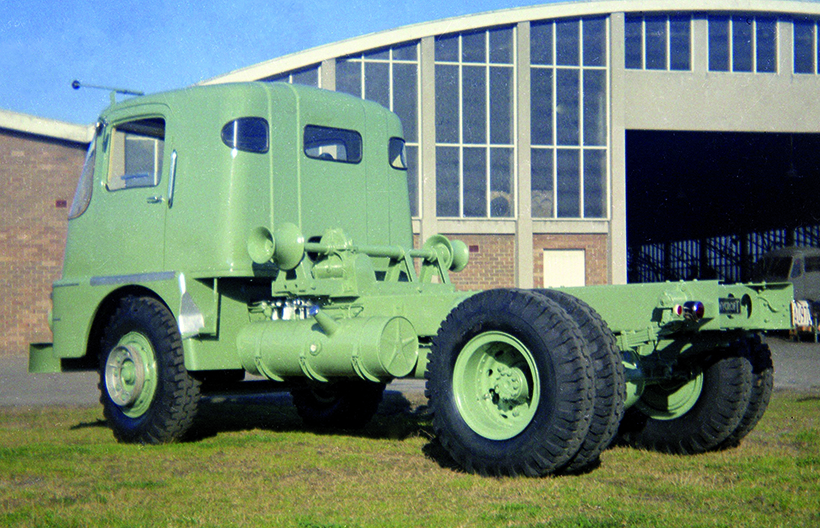 This image clearly shows the cab extension and the winch arrangement and was taken at the premises of Thornycroft Australia in Zetland showing the curved arch roof that did not have internal stanchions. A similar building was constructed in Melbourne in anticipation of more sales of the oversized Antars needing lots of room for servicing and the like. 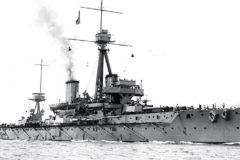 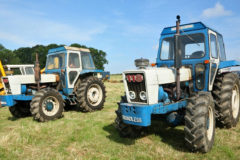