When the Scania R cab was launched in 1980, it was a game-changer. Today it’s one of the most sought-after show trucks, as Pip Dunn explains. 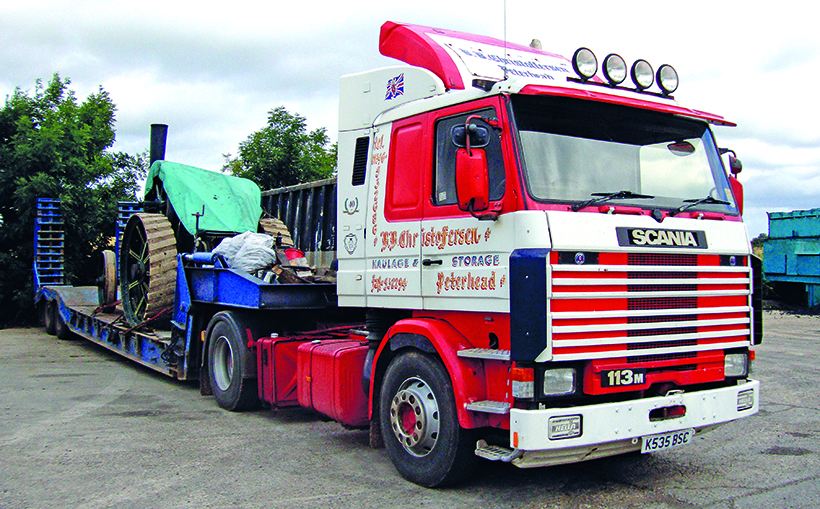 Scania R cab: This Scania R113 was near Leyburn in August 2009, but is now relegated to hauling traction engines rather than working every day. It has a standard height sleeper. The side dirt deflectors were the biggest clue to differentiating a 113 from a 112.

At the tail end of 1980, Scania’s new GPR range was unveiled, with the most obvious upgrade being the new cab that used a modular approach to construction. For long-distance operation, the R cab could have three engine choices under it. The iconic V8 as the R142 was the flagship, but the R112 was the model that appealed to most. 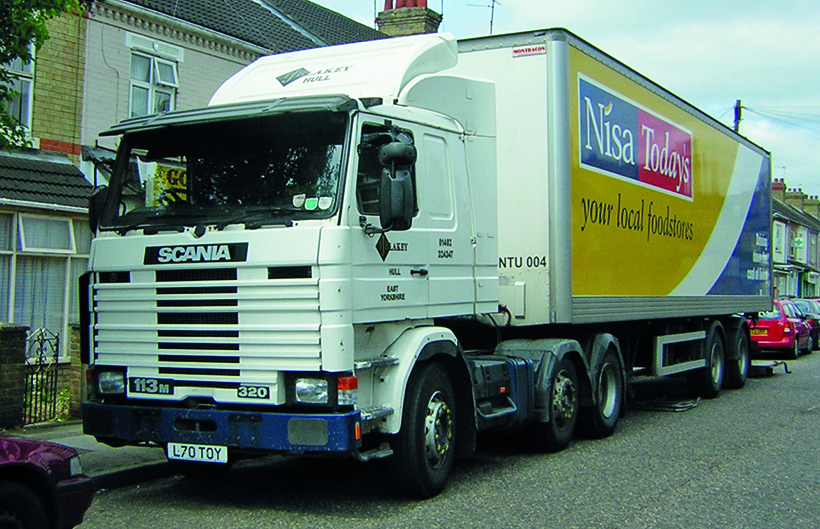 This R113.320 was delivering to a convenience store in Peterborough on June 6th, 2005. The 320hp engine option wasn’t initially offered, and most R113s had the 360hp engine. At 38 tonnes, the legal maximum in the 1990s, this engine would labour somewhat.

Eight years later, the model had a revamp with the R113/143 models replacing the established and popular R112/142. The changes were mostly to the drivelines, but there were a few tweaks to the cab as well, with side dirt deflectors the most notable difference. There was also a new Topline high-roof cab option although, in fairness, this was fairly small, and nothing compared to the Volvo Globetrotter, DAF Space Cab or MAN Roadhaus. 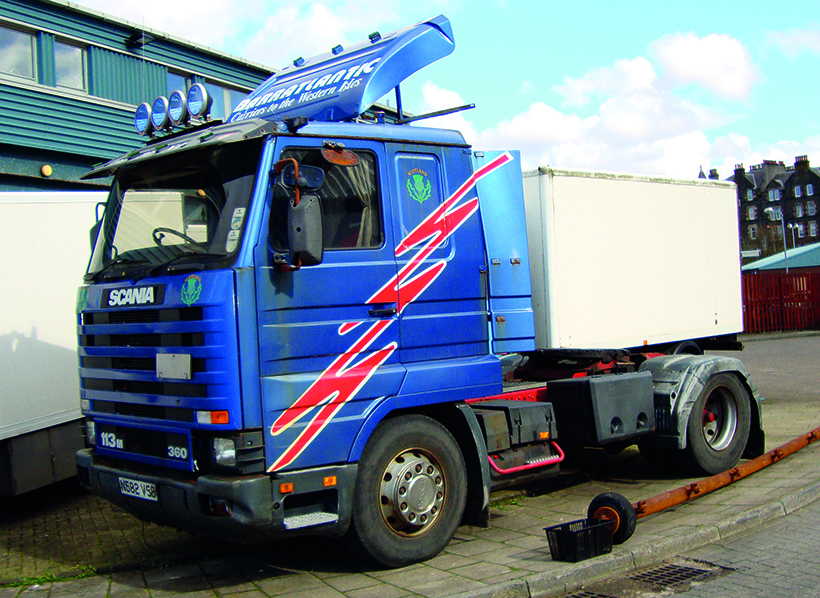 This R113.360 was in Oban in April 2009, and has the streamline cab which had a different front grille aimed at improving fuel economy. 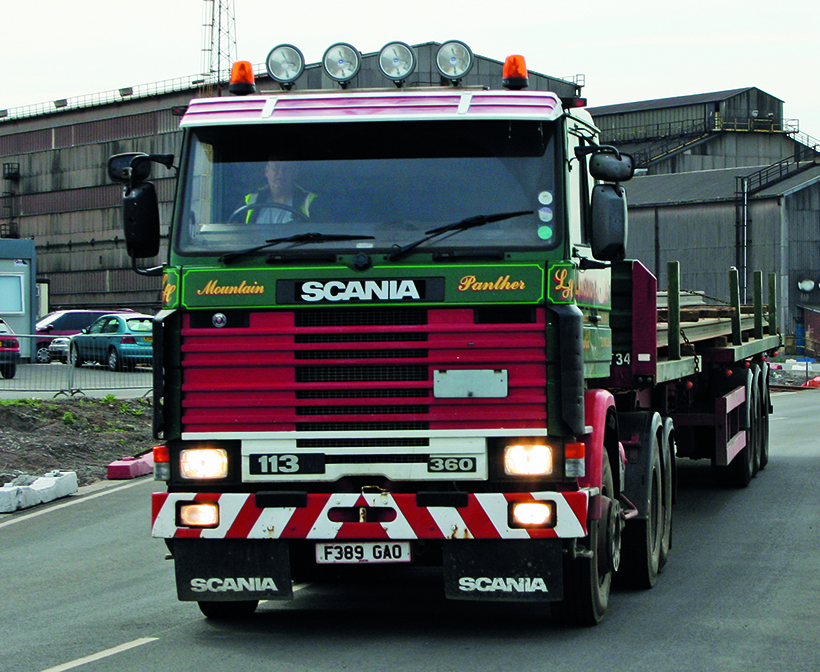 Running on an F-plate, this R113.360 tag axle unit was one of the earliest off the production line, but was still working in April 2007, some 18 years later.

The 380 and 500hp versions of the engine featured EDC – Electronic Diesel Control ­– which monitored the engine speed and other factors that affected combustion, and automatically adjusted the fuel injection timing to make a near perfect combustion on every stroke. 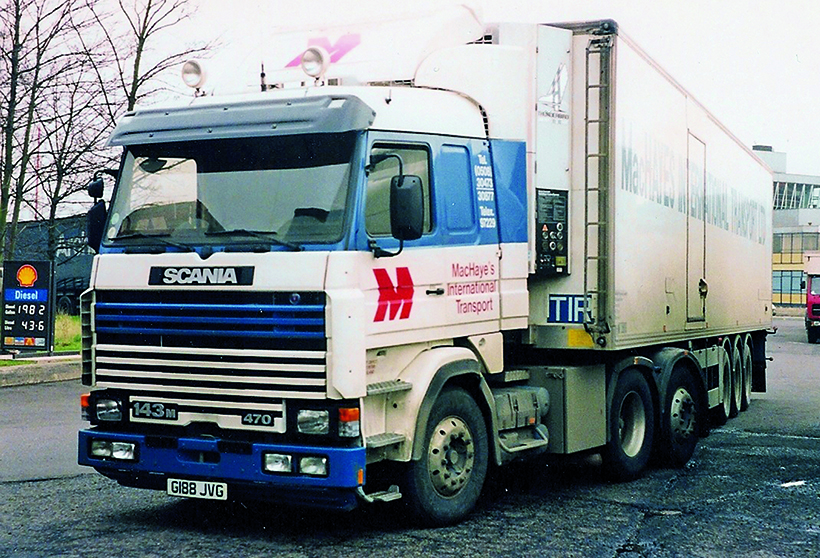 This R143 had the 470hp V8 engine and the Topline high roof sleeper. It is also a left-hand-drive example. It was photographed at Charnock Richard services on the M6, in July 1992.

Cab options were day – rarely specified in the UK – sleeper and Topline. The main user of day cabs – with V8s – was McGovern’s for its bulk waste operations in and around the capital. 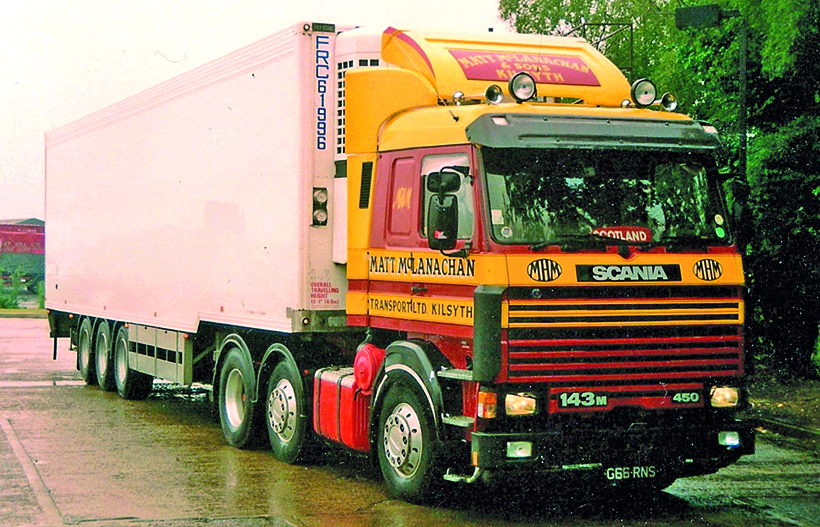 This R143.450 was also at Charnock Richard services in July 1992, and was returning from Spain. I managed to hitch a lift in it to its home in Kilsyth, Scotland!

Streamline
A major change came in the spring of 1991, when the Streamline option was made available for the cabs. This featured an external casing around the front grille to offer a smoother cab, and so better fuel consumption. This was available on all three cab types, and became a standard feature on R113.380s and R143s from 1993, although the original cab could be specified as an alternative. 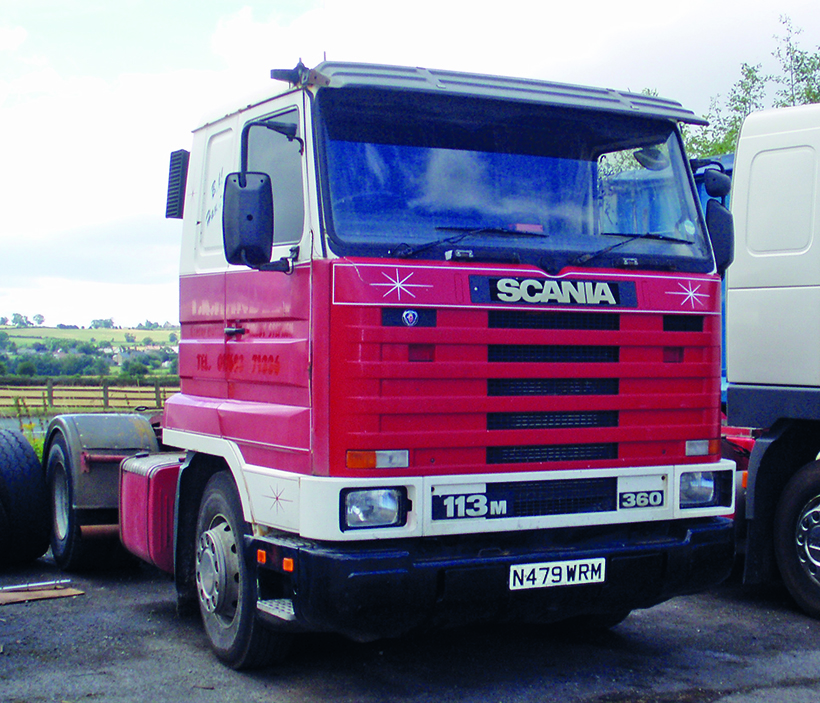 Another Streamline R113, this time on an N-plate, was one of the last to be built. It was parked near Finghall, which is near Leyburn in Wensleydale, in July 2006.

The Topline cab soon gained a lot of criticism for a hefty price tag and not much additional internal headroom, which led to Dutch firm Beers soon offering its Starline high roof cab option, which was marketed by Scania in the final years of the truck’s life, from 1994. 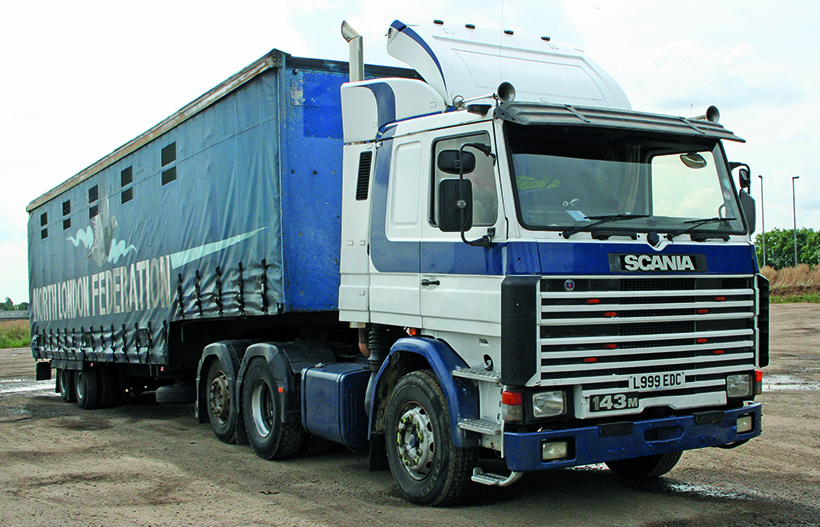 This R143 with a tag-axle looks well-worked when photographed at Stibbington truckstop, near Peterborough, in August 2005.

All good things come to an end
After a life of 16 years, the GPR cab range used in the 2- and then 3-series was replaced in 1996 by the new 4-series, which initially wasn’t especially liked for its strange upper bunk set-up in the – admittedly much-increased in size – Topline cab option. 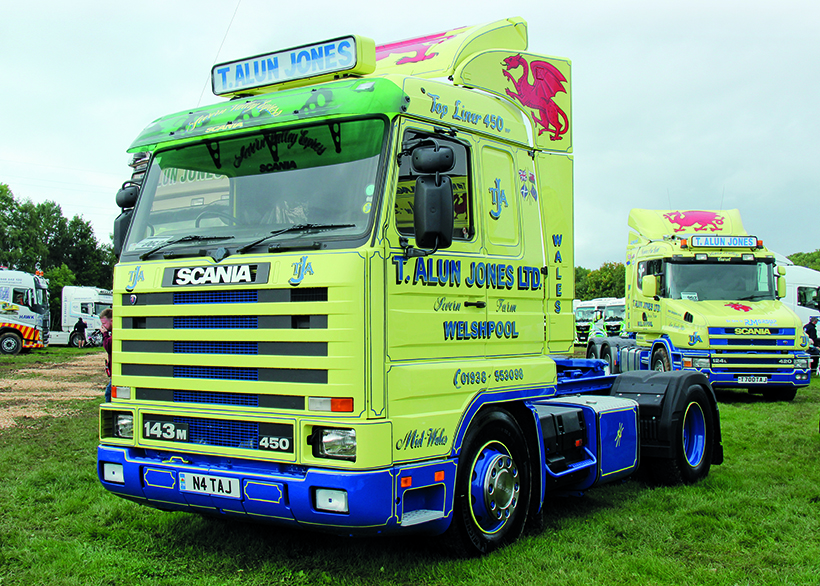 Scania R143s are very popular and so are ten-a-penny on the show scene! This one was in Oswestry in September 2017, owned by Welsh Haulier, T Alun Jones.

But the 3-series was still popular, and one Scania salesman once told me: “I could sell then all day long if they were still offered!”

And their popularity is proven on the show scene. Good condition R113s and – especially R143s with the V8 engine – command seriously good money and, if a runner or restored, then you’re looking in the £30,000-£50,000 bracket should you want to buy one! You’ll still see the odd one on the road working, again, especially the R143 models. 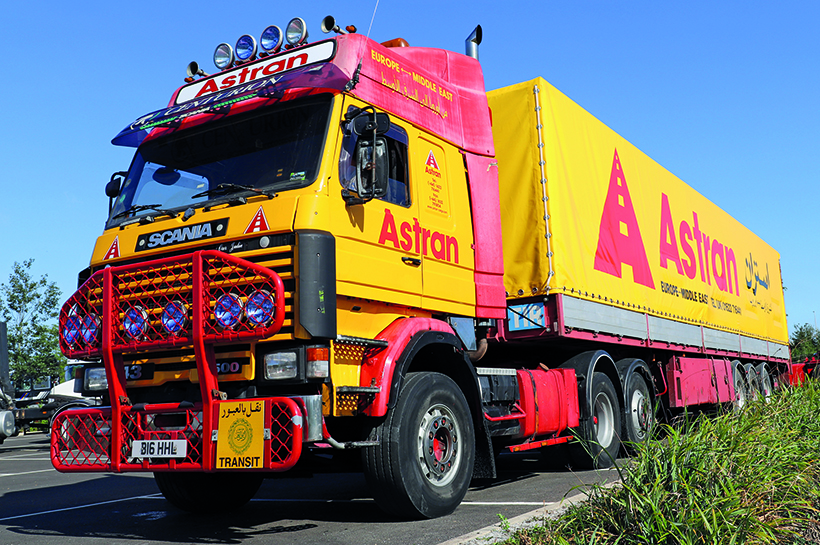 This R143, in the iconic Astran livery, is technically still a working truck, but owner Karl Skilton tends to prefer using his more modern trucks. Nevertheless, it remains popular on the show scene, and was at the 2019 Retro Truck Show.

Scania has always had a history of development and rewriting the rulebook, especially when it comes to driver comfort. Its 140 cab was ahead of its time when it appeared in the late 1960s, and when it started to show its age in the late 1970s, Scania acted accordingly with the iconic R cab. 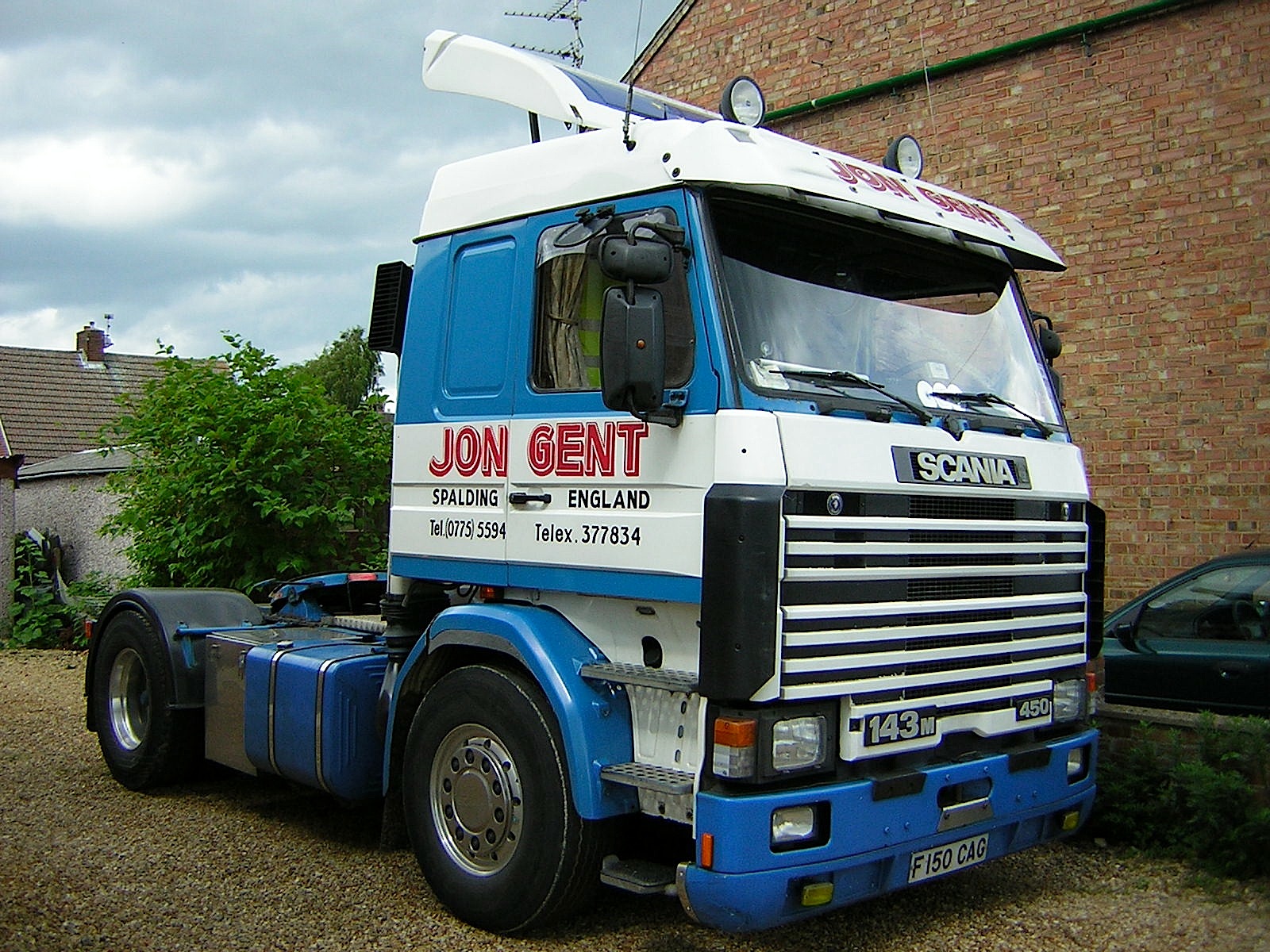 The fact remains today if you are lucky enough to see a truck of mid-1990s vintage still working at top weight, it will most likely be a Scania 143. And if you own one, then again, the chances are it’s an investment that will only go up in value! 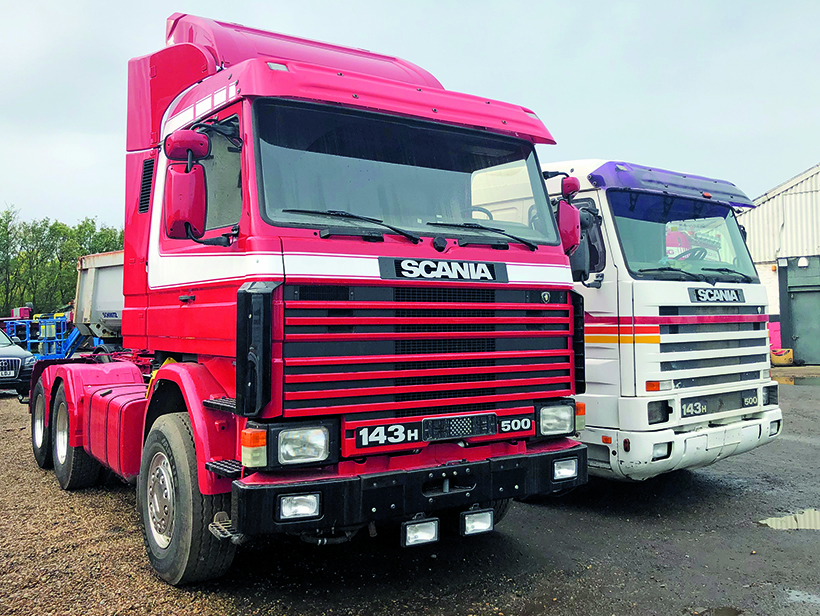 These two R143.500 both have the heavy-duty chassis – hence the 143H badges. Both were at a Truckstop in North London in October 2019. They provide a good comparison between the standard and streamline cab choices. 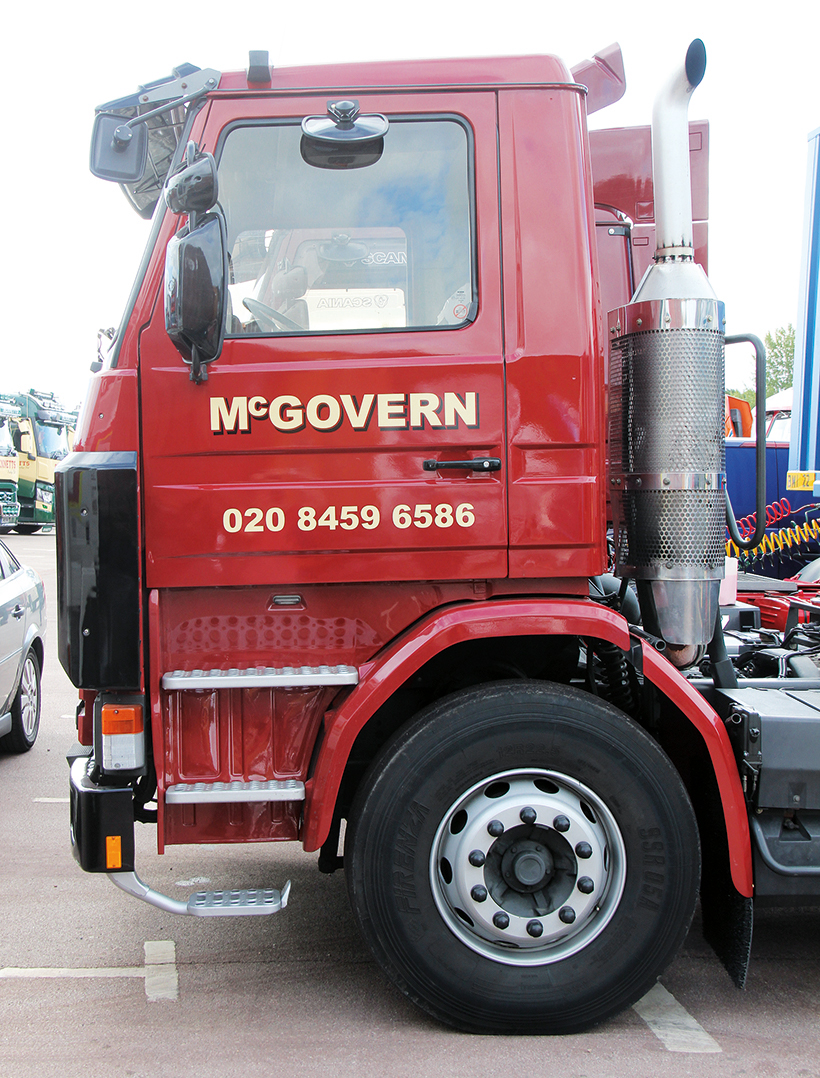 Day cab R-series Scanias were rare, but this R143.420 was one of several operated by McGovern’s. It’s been restored and is a regular on the show scene. 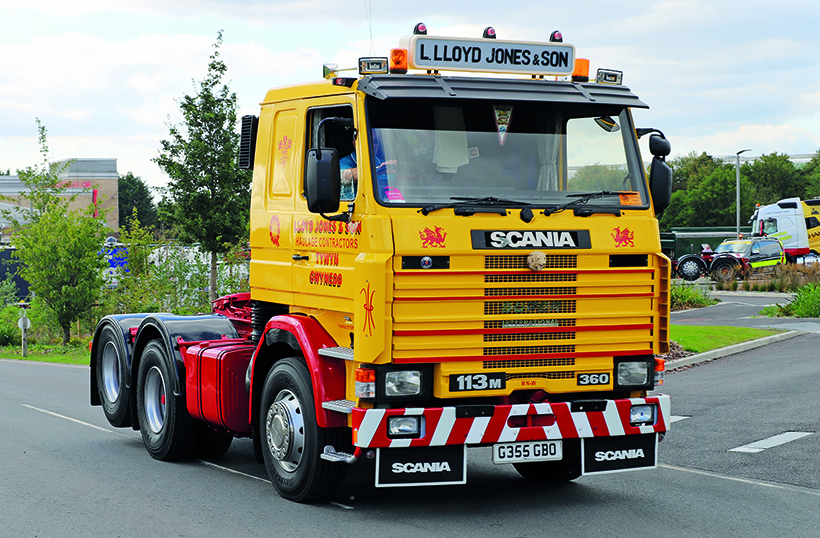 This 113.360 tag-axle tractor was a popular truck in the late 1980s and early 1990s for general and long-distance haulages, and would be taken the length and breadth of Europe by UK hauliers. This example now has a relaxing life as a show truck, seen at the 2019 RTS. 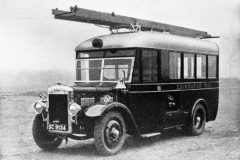 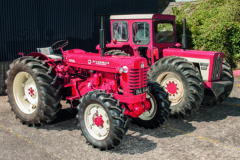