Mike Forbes offers a fascinating selection of photographs from the Chris Hodge ’Stilltime’ Collection, this time spotlighting the historic eight-wheelers. 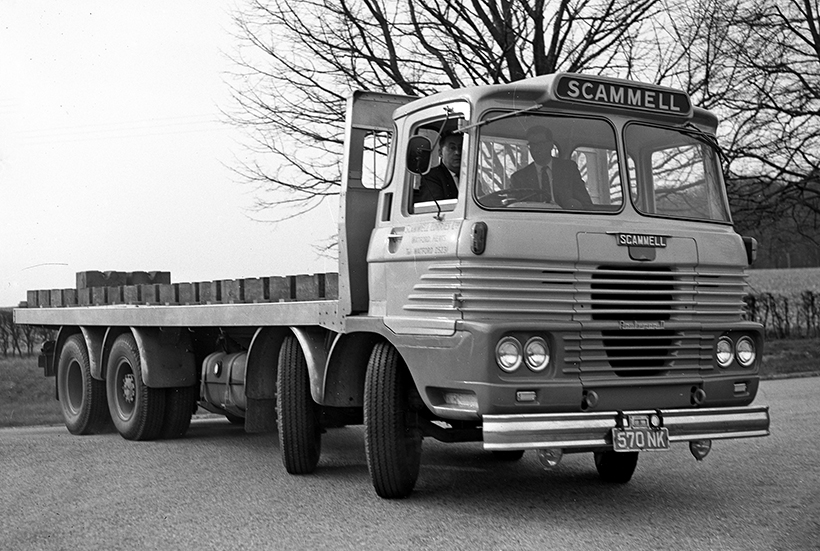 The historic eight-wheelers: The Scammell Routeman, with its glass-fibre, Michelotti-designed ‘cheese-grater’ cab, would go on to be the chassis of choice for many tipper operators into the 1980s. However, here we have an early example of the Routeman II, fitted with a platform body, loaded with test weights, being road-tested in the early 1960s.

Eight-wheelers seem to be among the most popular lorries for enthusiasts, although younger fans enjoy the maximum-weight artics. While the latter now rule the commercial vehicle world, I’m happy to say that the ‘eights’ still hold sway for many tipping and other specialist jobs. And now we have ‘tri-dems’, with three of the four axles at the rear, as well.

It’s a while since we focused specifically on eight-wheelers, although they’ve certainly cropped up when we’ve featured other individual ‘scenes’, such as LDOY and lorries on test. So you might have seen one or two of these photos before, but they bear showing again. For the future, I’m thinking of ‘Tankers at LDOY’, which will include many eight-wheelers.

They were, for many years, the maximum weight vehicles of choice, especially when pulling a draw-bar trailer, until changes in legislation favoured artics. The sight and sound of a fully-laden eight-legger could always stir the heart of a transport enthusiast, especially as they were so often engaged on long-distance haulage.

In the days when most of us travelled less, the eight-wheeler was at the heart of the ‘romance of the road’ – where was it going and what was it carrying? Whether the driver would feel the same, wrestling with heavy steering, while plodding along the indifferent roads of the past, cold in winter, hot in summer, was another matter. But for those of us standing by and watching, he was ‘king of the road’. 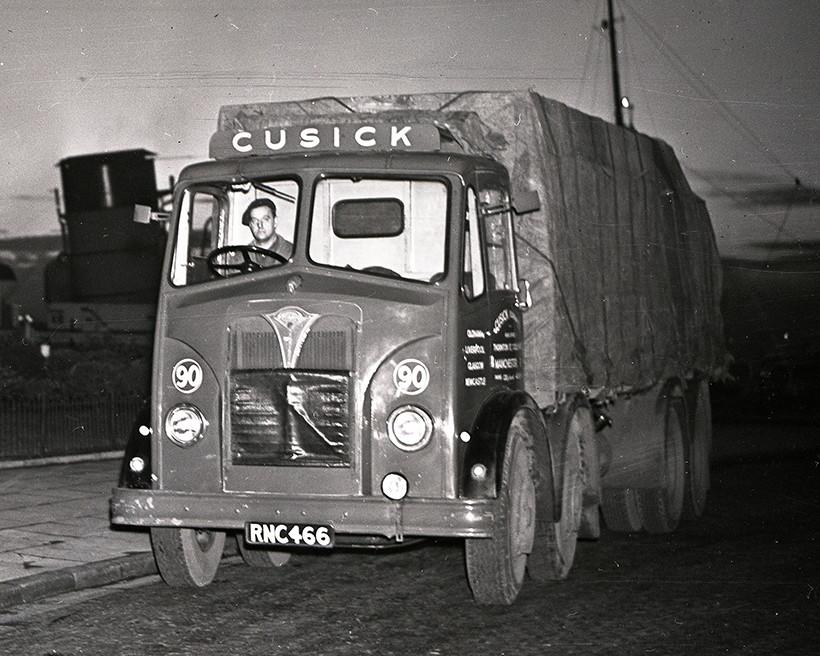 Here it is; the ‘romance of the road’, as the driver, with his flat ’at at a rakish angle, is about to set off on a night trunk for Manchester-based haulier, Samuel Cusick Ltd, in a well-loaded 1955 Guy Invincible. RNC 466, with the Willenhall cab, was quite new when Commercial Motor visited the company. 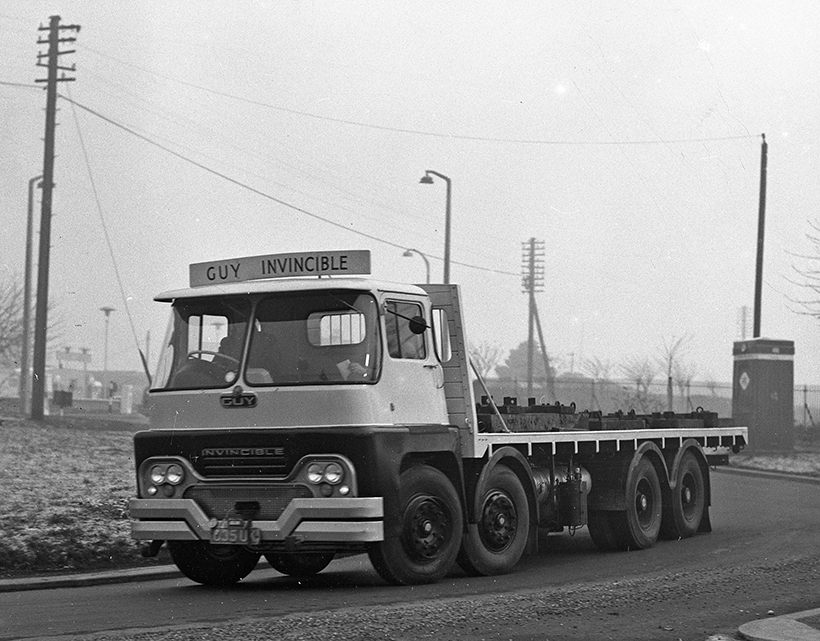 Moving on a couple of years, CM road-tested the Guy Invincible eight-wheeler with its stylish and futuristic new cab. On Wolverhampton trade plates, 035 UK is seen here negotiating a roundabout, with frost on the grass and an RAC box in the background. 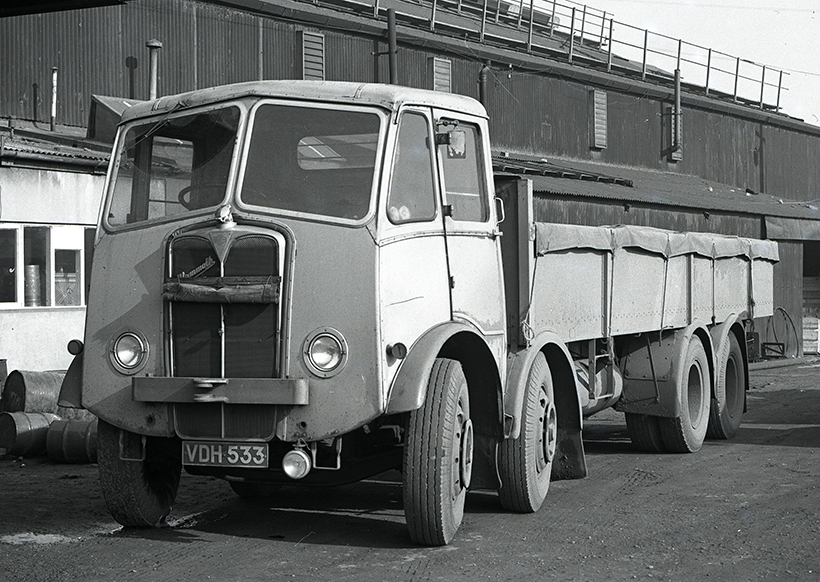 A classic eight-legger from AEC; a Mammoth Major 8 Mk III, VDH 533 (Walsall, 1955). Its fixed-sided body is loaded and sheeted, ready for the off from a Midlands engineering works. 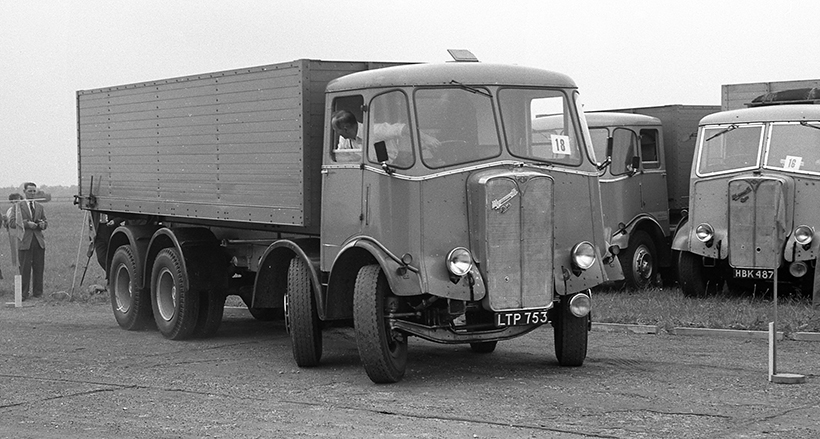 Another AEC Mammoth Major 8 Mk III, LTP 753 (Portsmouth, 1955), this time a shorter wheelbase tipper, with a different cab with ‘wrap-around’ windscreens, being reversed up to the flags at a Lorry Driver of the Year event, believed to have been on an Oxfordshire airfield. Note the ‘trafficator’ on the cab-side, ahead of the driver’s door, and the similar vehicle in the background, next to another, probably from the same fleet, with a different cab, HBK 487 (Portsmouth, 1952). 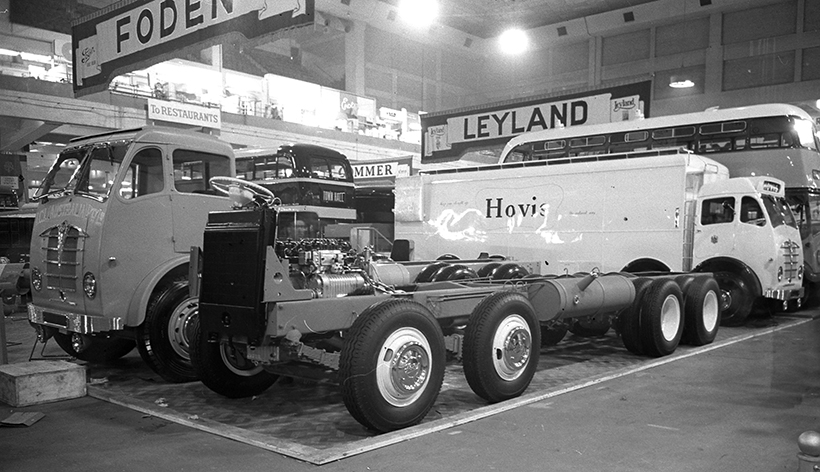 Seen at the first, post-war commercial vehicle show in 1948, is a Foden eight-wheeled chassis, fitted with the company’s new, two-stroke diesel engine. To the rear, we can see a chassis fitted with the early, flat-fronted cab fitted to the Foden FG chassis, and a complete vehicle with a bulk grain body for Hovis. 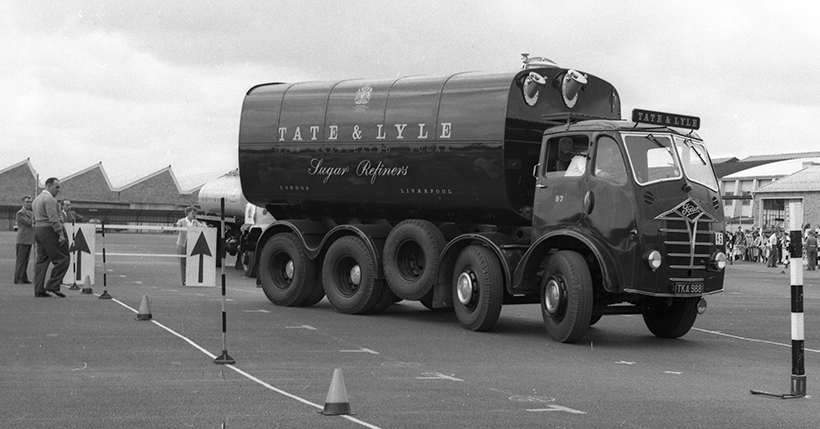 Photos from LDOY heats keep cropping up. Here we have a nice shot of one of those classic, short-wheelbase Foden FG eight-wheeled bulk sugar tankers, operated by Tate & Lyle, TKA 988 (Liverpool, 1955), being manoeuvred around the course.

Another LDOY view, this time in the Midlands, with a Bristol HG6L, MVP 734 (Birmingham, 1952), fitted with the Eastern Coachworks cab, from British Road Services Birmingham Cheapside branch, taking on the tests, around the National Benzole flags, loaded with two Nuffield tractors, no doubt destined for export, without tyres, wooden slats around the bare wheels. 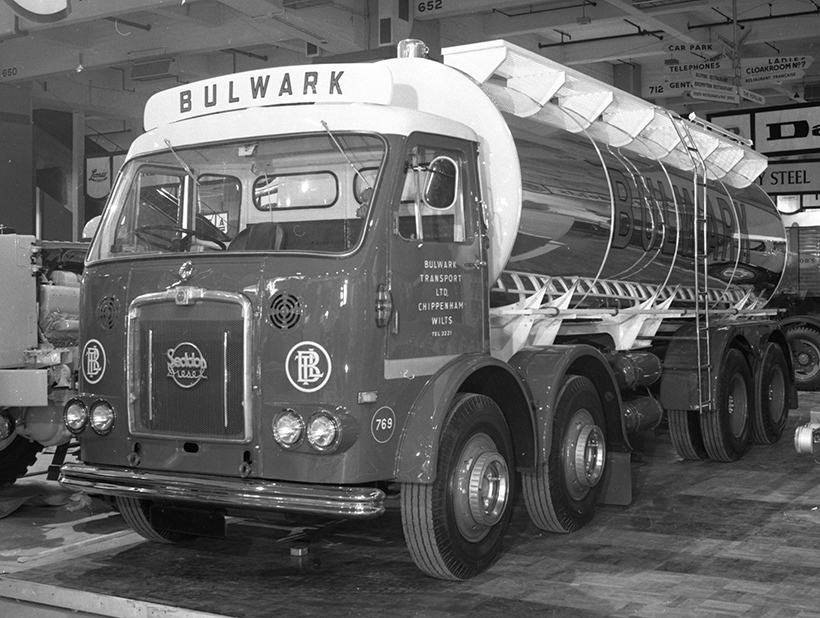 Lorry manufacturers always used to try to get vehicles on their motor show stands in the colours of a well-respected operator, as was the case with this Seddon DD8 (assuming it was the double-driver, rather than the single-drive SD8 version of the company’s eight-wheeler), in the colours of Bulwark of Chippenham, seen at the 1962 show. 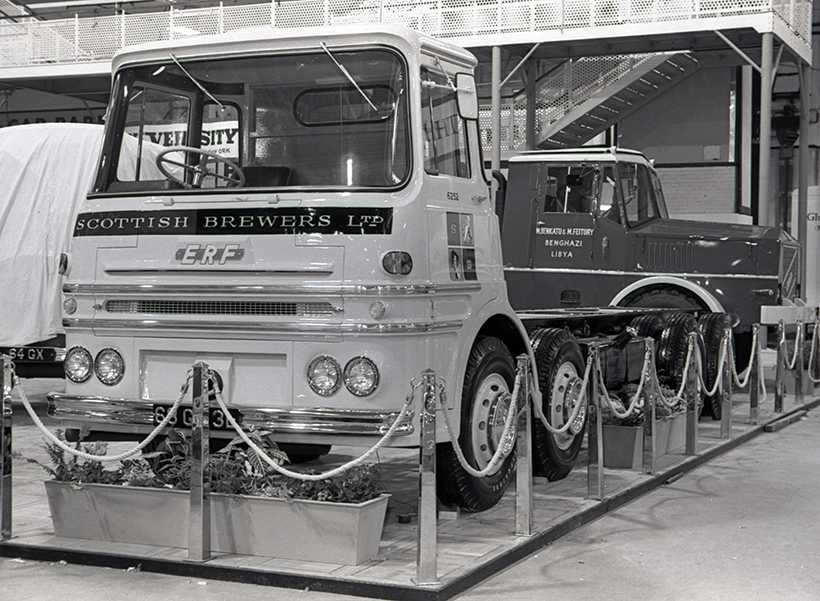 At the same show, we see an ERF 68GX eight-wheeled chassis-cab, with the then new LV cab – this was the Jennings version, with horizontal door handles – this time showing off the livery of Scottish Brewers Ltd. 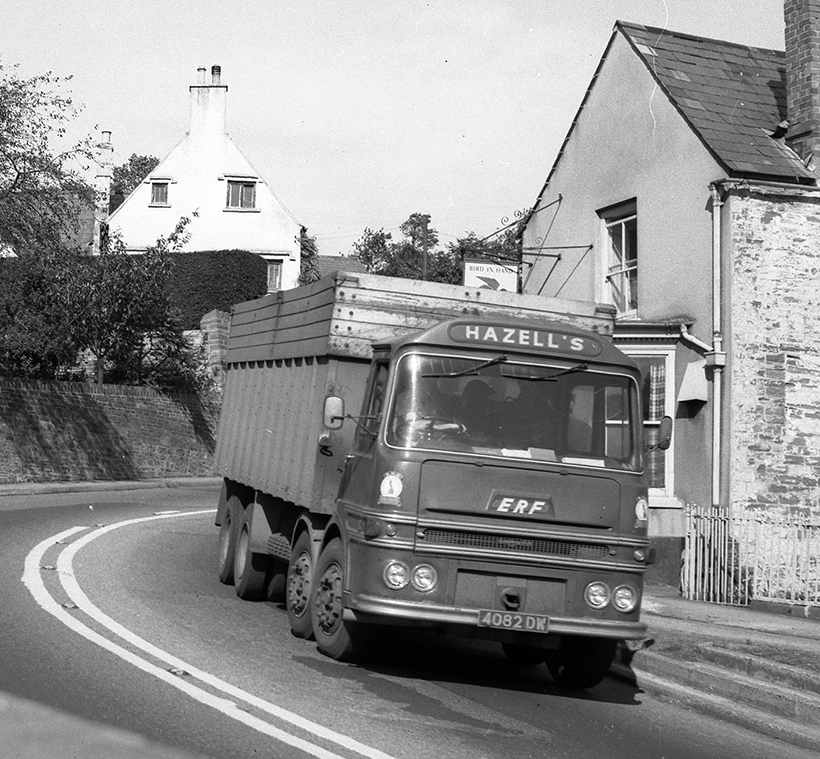 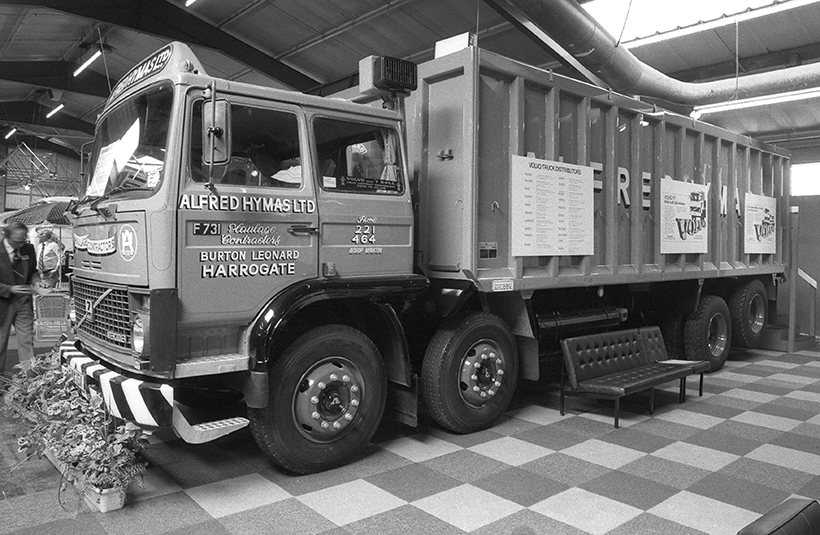 A later, eight-wheeled tipper, with a bit of a difference, from the early 1980s. Photographed at ‘Tipcon’ – the Road Haulage Association’s Tipper Conference and Exhibition, at Harrogate – YWW 115X (West Riding, 1982), was a new Volvo F731, of well-known local operator Alfred Hymas. This was probably built at the Irvine plant in Scotland, a 6×2, complete with lifting rear axle. 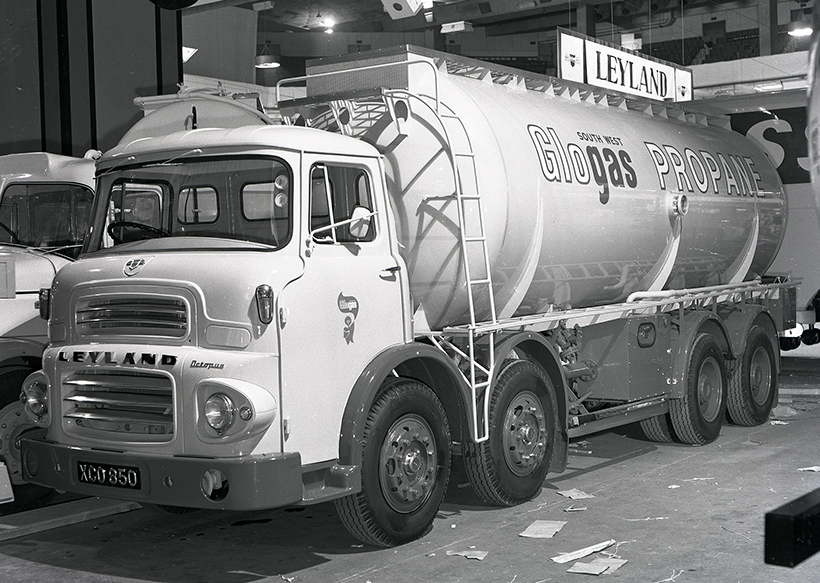 Back to the 1962 Earls Court show, with a smart-looking ‘Power Plus’ Leyland Octopus, with the long-door LAD cab, XCO 850 (Plymouth, 1962), fitted with tank for propane gas in bulk, under the name of ‘Glogas’, judging from the ‘Mr Therm’ on the cab door, part of the South Western Gas Board. 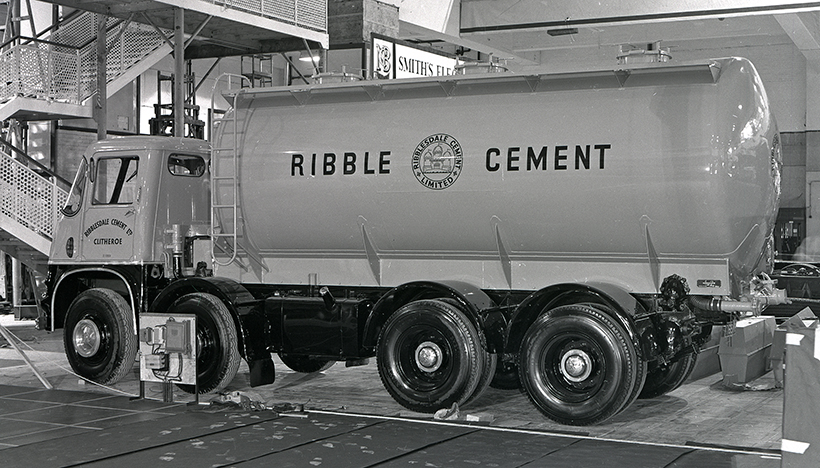 At the same show, another sort of tanker – for bulk powder – seen from the rear for a change, built by Bonallack, fitted to an ERF eight-wheeled chassis, no doubt Gardner-powered, fitted with the KV cab – still available and displayed alongside the new LV – destined to join the fleet of Ribble Cement of Clitheroe, Lancashire. 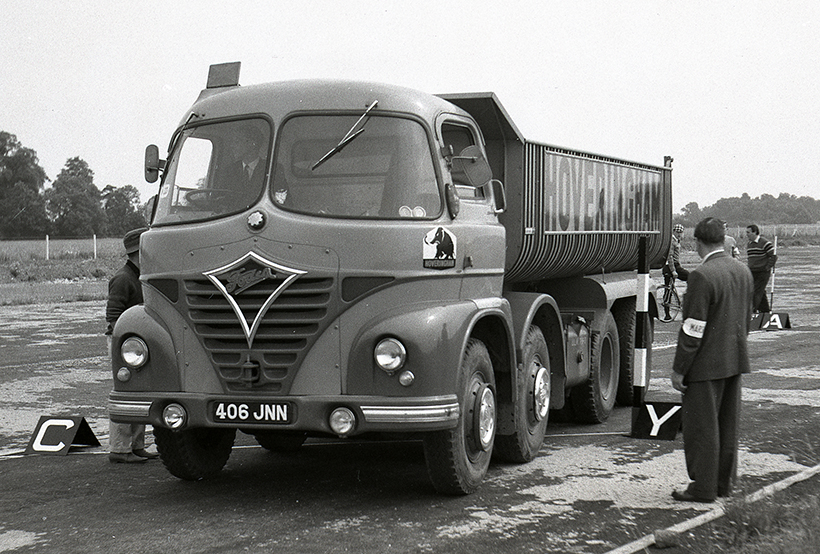 A nice shot of a smart-looking Foden S21 ‘Mickey Mouse’-cabbed eight-wheeled tipper, with a characteristic Neville body, with its rounded, ribbed sides, 406 JNN (Nottinghamshire, 1961), from the fleet of Hoveringham, complete with ‘woolly mammoth’ logo on the orange and red cab, taking part in yet another round of LDOY. 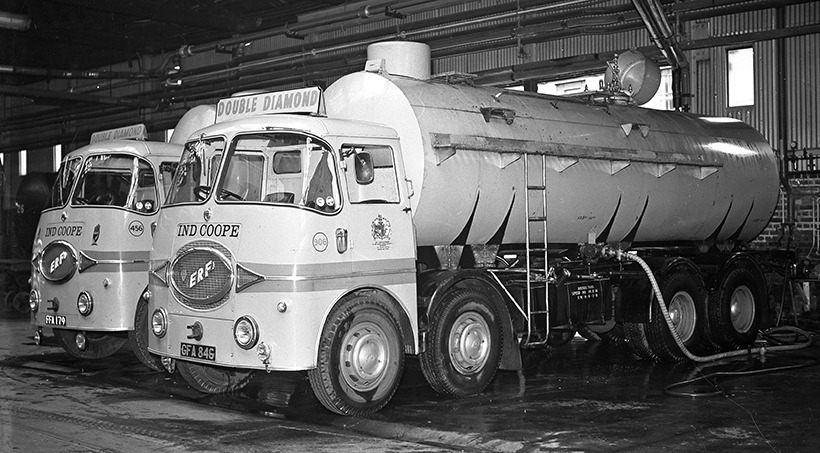 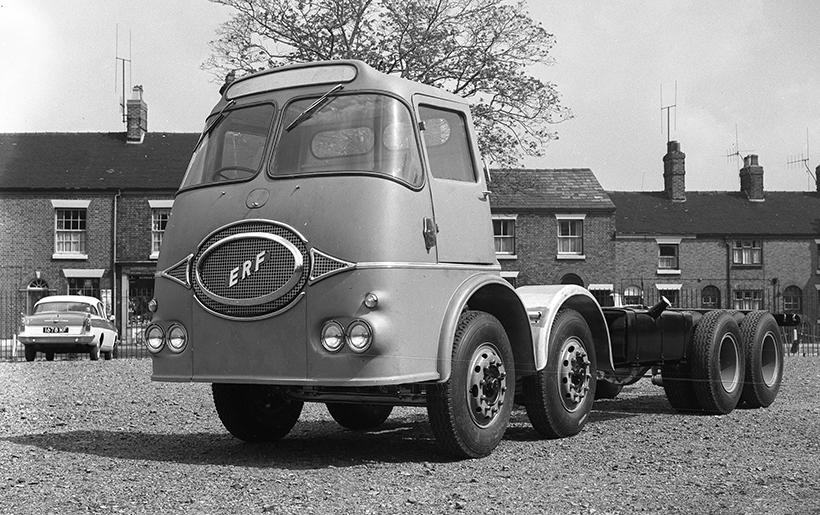 As a comparison, here’s another KV-cabbed ERF eight-wheeler, this time with the set-back front axle, on a chassis-cab ready for delivery to the bodybuilder.

Now for something completely different – apart from the cab, anyway! Along with a tractor unit and a six-wheeler, on the left we see an eight-wheeled chassis-cab from TVW – which stood for Transport Vehicles Warrington. When Sentinel failed in 1957, its main UK dealer – North Cheshire Motors – purchased the stock of vehicles and parts, and continued production under the TVW name. Sentinel engines were replaced by Gardner, Meadows, Perkins, Leyland and Rootes diesels, with cabs from Boalloy, as here, or Williams of Grappenhall, around 100 vehicles being built by the time the company closed in 1961. 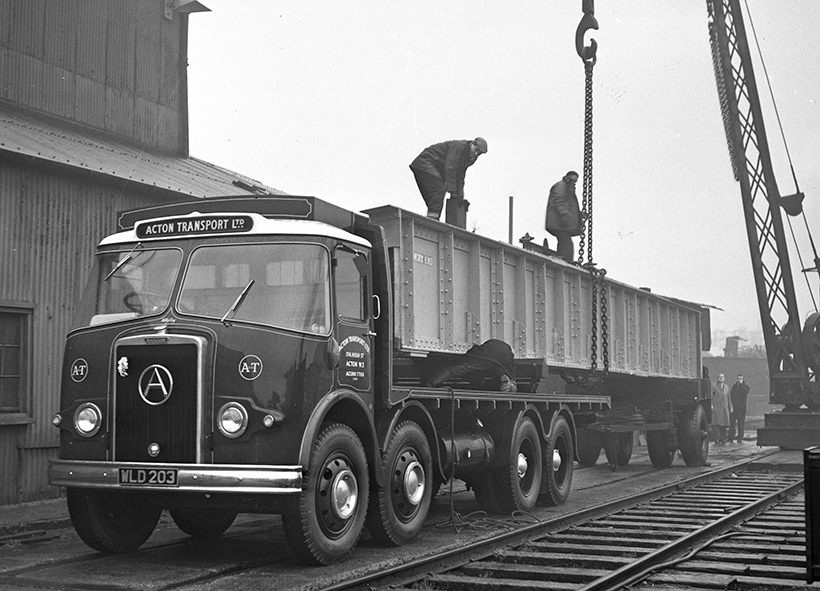 Demonstrating how a long, bridge girder would be loaded for delivery on an eight-wheeler, with a ‘dolly’ at the rear, with this Atkinson ‘Black Knight’, WLD 203 (London, 1959), of Acton Transport of West London. 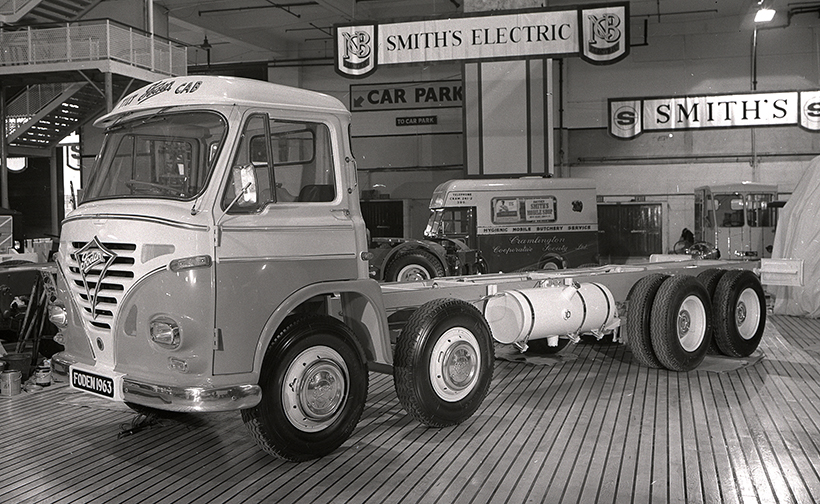 Back at the 1962 show – which might appear to have been something of a final fling for eight-wheelers, before the C&U Regs changed to favour artics – we see a Foden long wheelbase chassis, fitted with the new tilting S24 cab, with its rectangular, ‘Cibie’-style headlights. 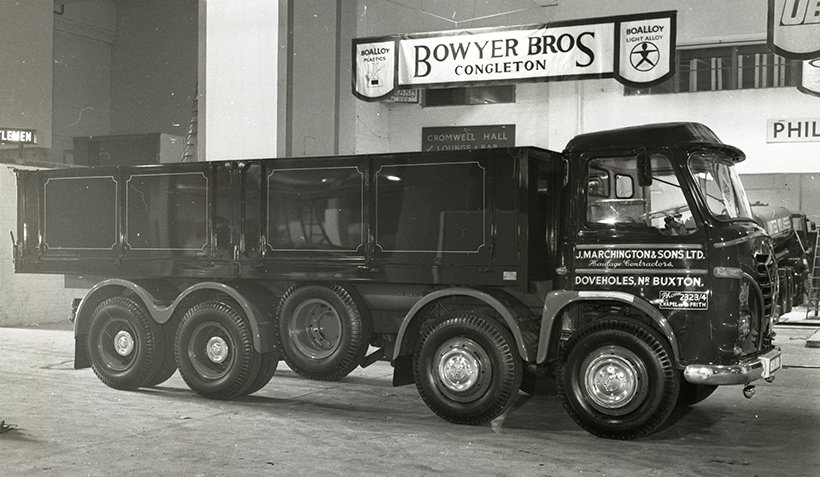 The S24 cab also appeared at the show on this short wheelbase tipper, with a body carrying a Boalloy badge, for hauliers, J Marchington & Sons, of Doveholes, near Buxton. 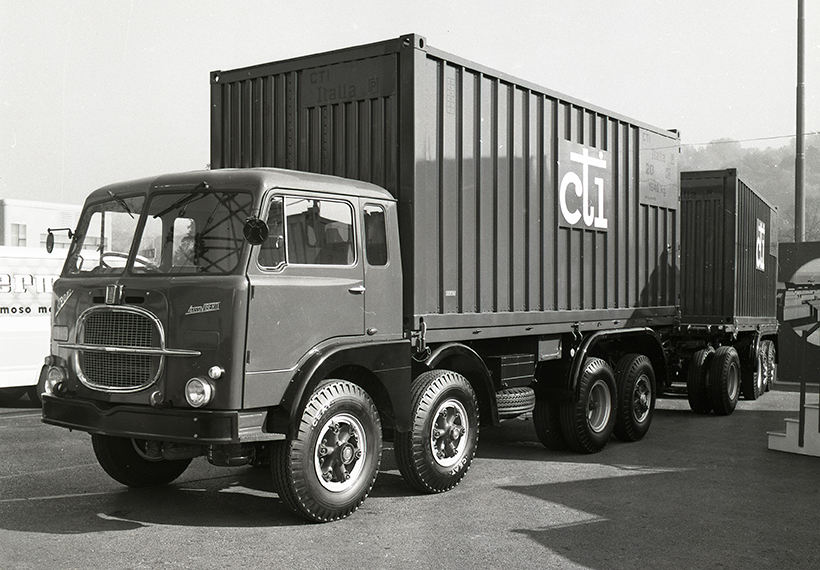 Now to end with something really different, showing that the eight-wheeler wasn’t entirely confined to the UK. At a Continental show, we see a four-axle Fiat 690M2, with a ‘4AssiViberti’ badge, sporting ‘Tri-lex’ wheels and steering, single-wheeled rear axle. It and its four-axle ‘tri-dem’ trailer are both carrying 20ft ISO containers but, with a different method of retention, compared with the twist-locks usually fitted. 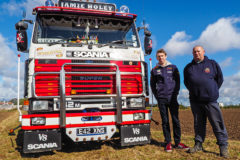 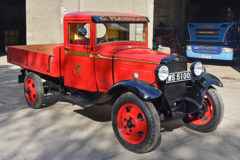