Volvo unleashed the F16 truck in the mid-1980s, and it proved to be a beast of a machine, as Pip Dunn explains. 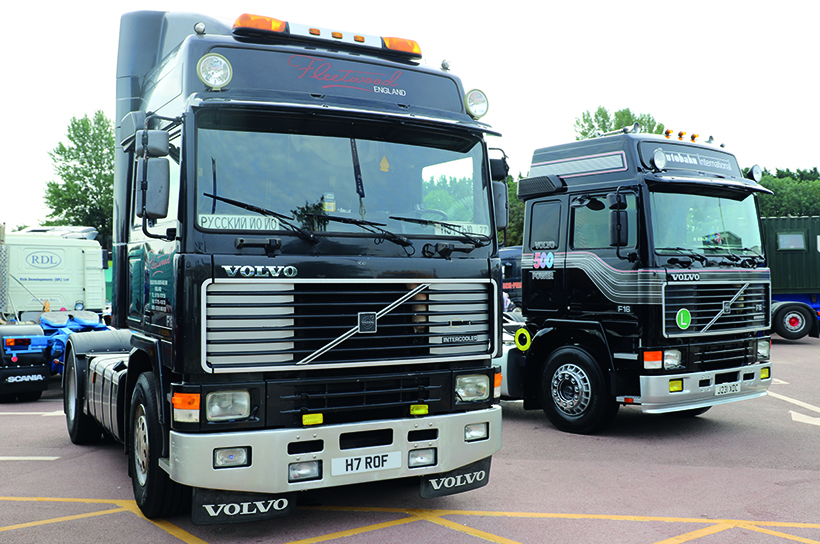 These two F16s are regulars on the show scene, and epitomise the classic look of this model until the late 1980s when it was a popular owner-driver’s truck.

Big power was the preserve of the Swedes in the 1970s, who developed larger engines to produce more horsepower and torque than anything seen in the UK.

Scania had a 14-litre V8 and Volvo had the 12-litre straight six in the F89. These were aimed at operators in its Scandinavian homeland that needed more power as their gross weights were far higher than the 32 tonnes UK operators could max out at. 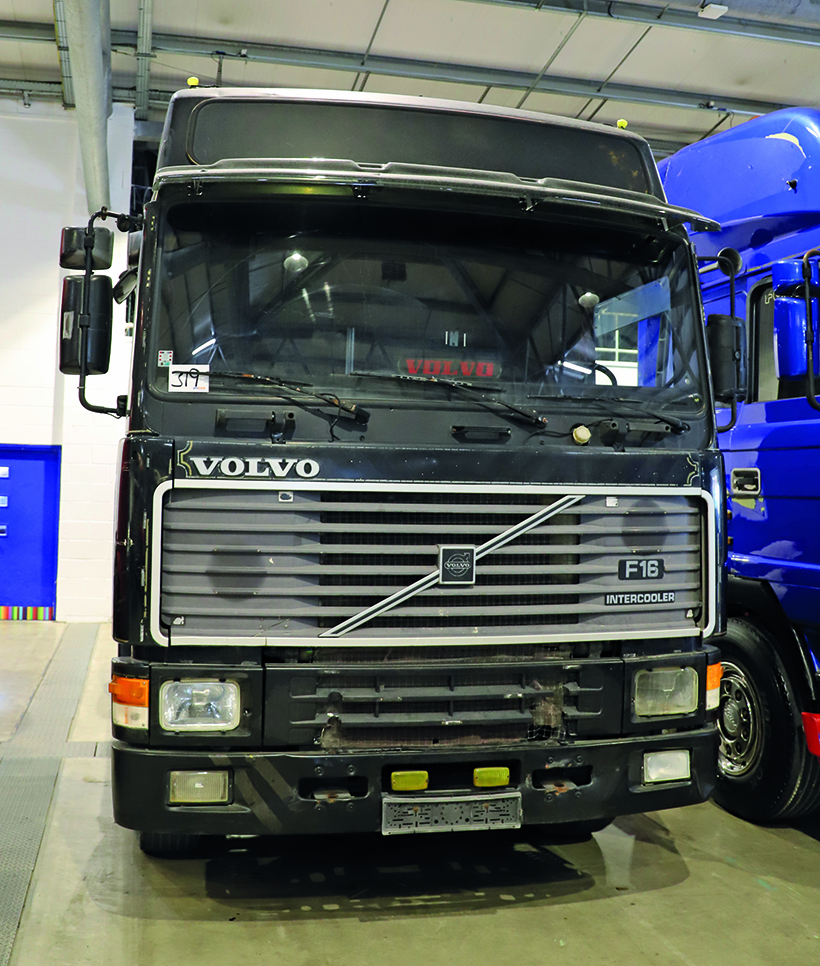 Another F16, this time a 4×2 was up for auction in June 2019 and would have probably been snapped up.

The 350hp Scania 140, and then its replacement, the 375hp 141, were still sold across the globe and became very popular in the UK especially among those hauliers doing long continental and Middle East runs.

Throughout the 1970s, Volvo, however, had only had a 12-litre engine as its biggest and most powerful engine. It first appeared with the inception of the F89 in 1970 and continued through to the development of the F12 in 1977 and beyond. 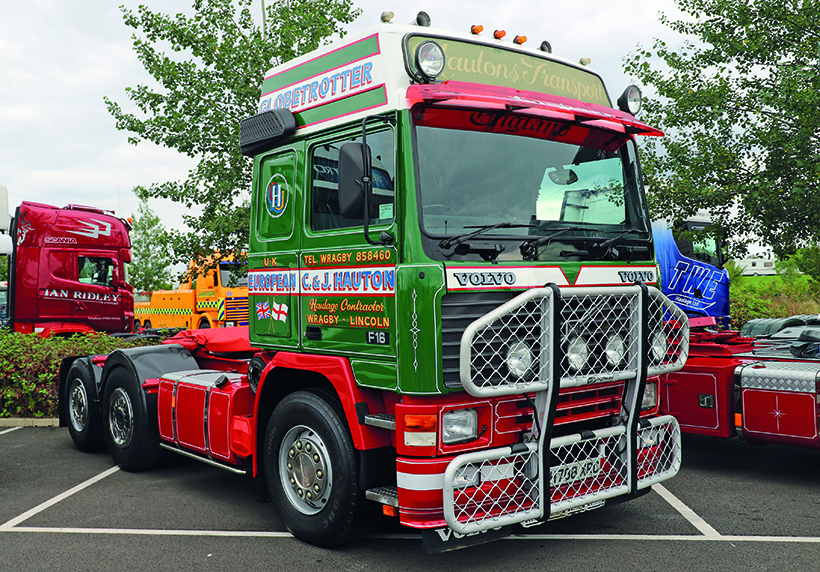 This F16 is a 6×2 with a tag axle, popular with those operators who did time work and went off-road, while also needing plenty of power and torque.

But in 1987, it launched an all-new engine – a massive 16-litre straight six rated at 465hp and 2,015Nm of torque. By the time the F16 appeared, Scania’s biggest engine was still its 14-litre V8, but now intercooled and developing 420hp in the R142. In one launch, Volvo effectively launched a ‘power race’ with its Swedish rival which would continue to have many changes of the baton over the next 35 years. 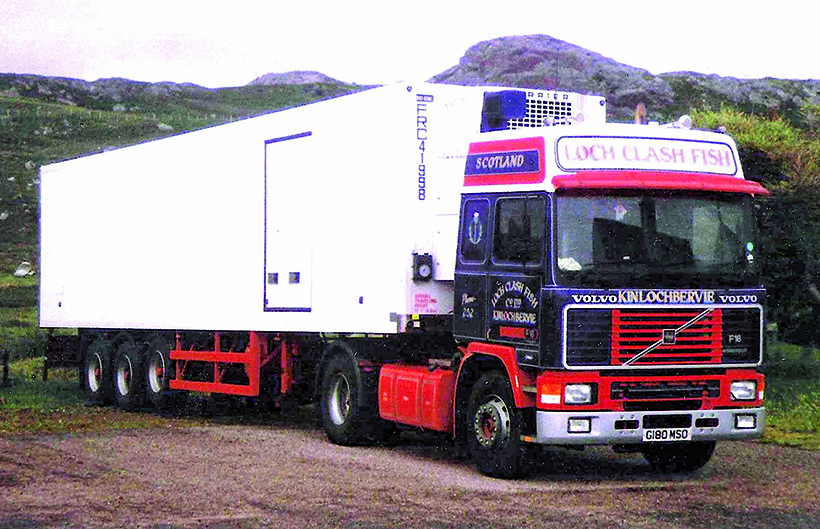 This F16 was operated by Loch Clash Fish Co. of Kinlochbervie in the far north west of Scotland and would have had plenty of hills, and miles, to contend with taking fish across Europe. This was the kind of work for which an F16 was ideally suited. It was in its home town in July 1992. 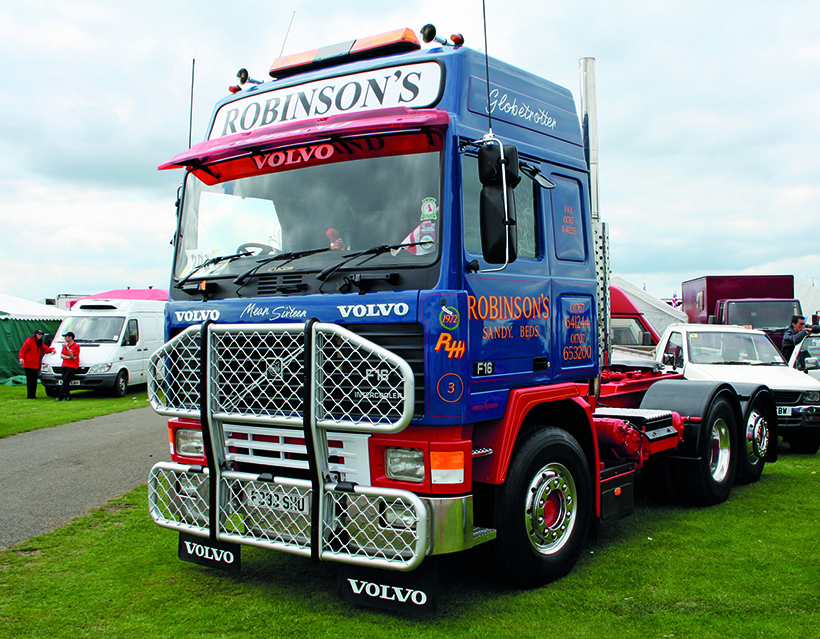 Another restored F16, this one a 6×2 with a tag axle. The bulbar and chrome exhaust stack have been added since it was built by Volvo!

But in 1987, the F16 was the ultimate driver’s truck, the most aspirational vehicle on the road. Admittedly it had more power than you could really ever need for 38 tonnes. You could have it with a standard sleeper, but most operators understandably went for the Globetrotter cab. 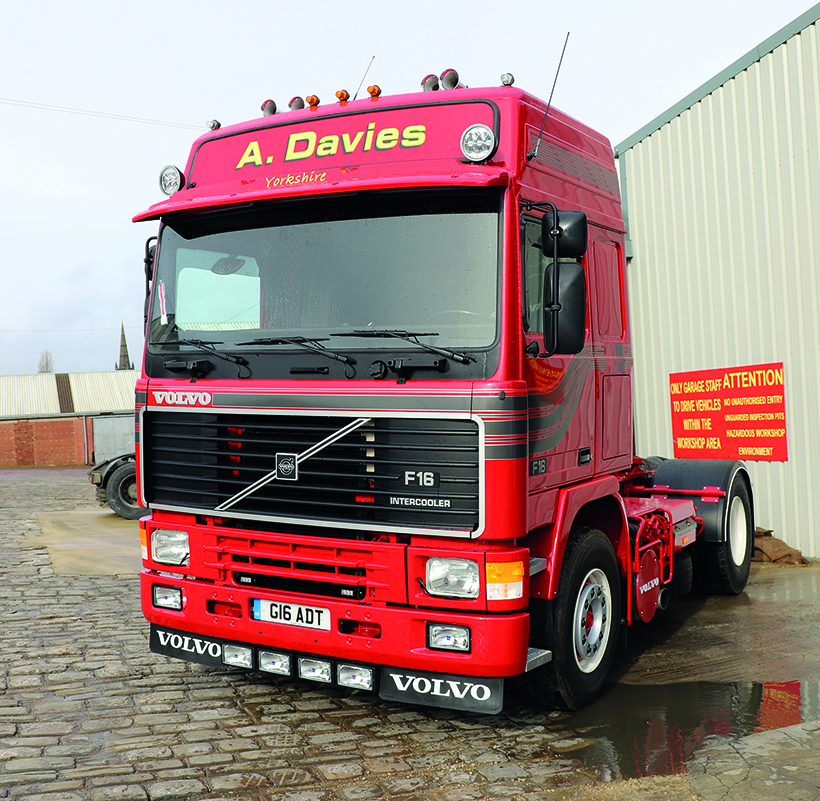 A Davies of Wakefield has a fine collection of restored, top power, trucks from the 1980s, including this superb F16 that was imported from Italy.

The truck was launched at the same time Volvo unveiled a facelifted Version 3 of the F10/12 cab that had appeared ten years earlier. It had new rectangular headlight set up and grey trim inside. The F16 was noticeable by having a silver border on the front grille. 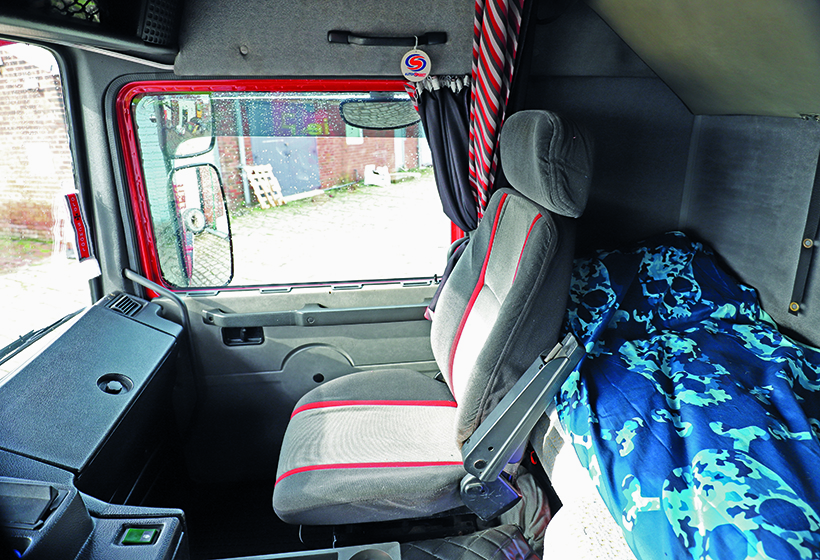 The Globetrotter cab was the best in the business at the time with lots of space for the driver.

To handle the torque, the F16’s TD162F engine had the new SR2000 gearbox and the new RAEV91 single reduction axle. Black was and still is the most popular colour for an F16 and this was reflected in the promotional brochure of the day. 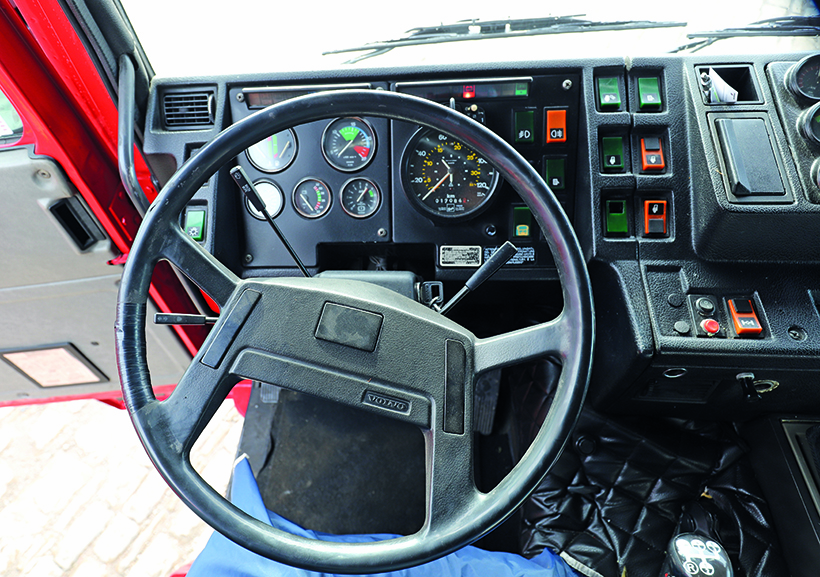 There were two tweaks to the F16’s driveline; in 1990 it was offered with the TD162FL engine at 485hp, and 2,160Nm of torque while in 1993, just before it was replaced by the FH16, it came with the TD163ES engine with EDC and rated at 500hp with the same torque output. The latter were very rare as not many were sold before the model was phased out. 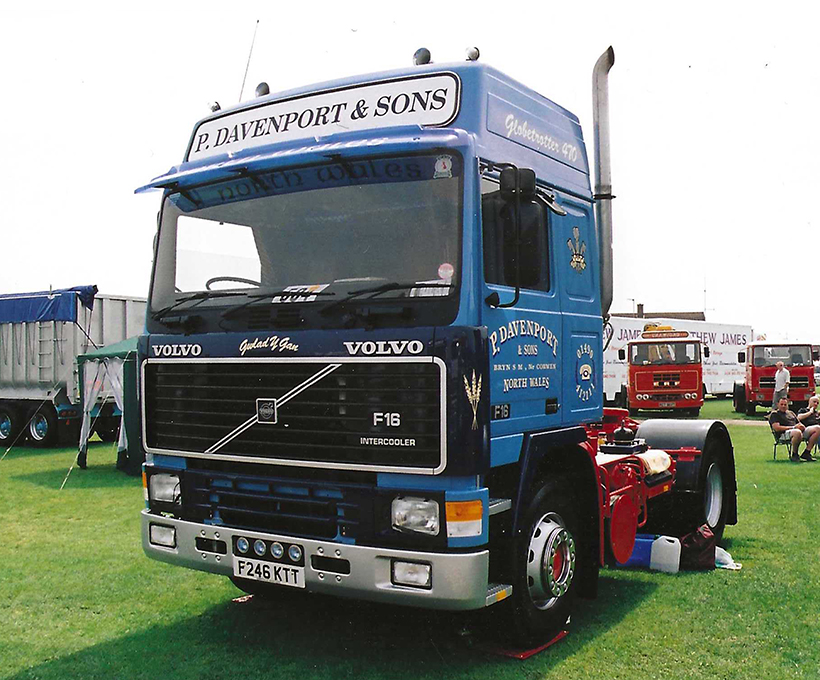 Although standard sleeper was an option, most F16s were sold with the top of the range Globetrotter cab.

In their short six-year life before being replaced by the FH16, not too many F16s were sold, although some Scottish hauliers doing long distances from the hilly Highlands to right across Europe found having that extra power – which gave better acceleration – did amount to noticeable savings in journey times on long hauls.

The F16 was never especially good when it came to fuel consumption, but then, it was often said, if you could afford an F16, you probably were not overly bothered about fuel returns! 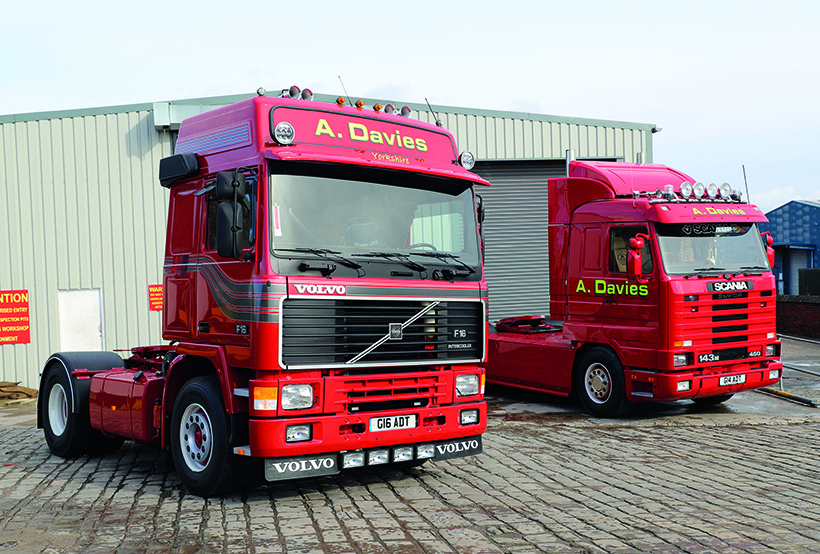 For most operators, the F16 was all about image. It was proof you’d made it if you had one. But they were, nevertheless, still one hell of a truck!

This feature is from the latest issue of Heritage Commercials magazine, and you can take advantage of a great, money-saving subscription simply by clicking HERE 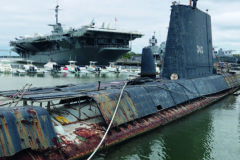 1945 Guppy-type American submarine to be scrapped 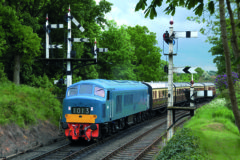