The 1969 Dennis D-Type fire engine/car transporter XKK 54, (chassis No 1.1204/231) has an amazing story. It was supplied new as a fire engine to New South Wales, Australia, and was eventually decommissioned and sold off in 1999. It was then converted into a race car transporter, and has been a regular sight at Goodwood where I saw it at the excellent Members Meeting in, April 2019. It’s also been used for promotional purposes at Goodwood, and was even housed there for the 2019 season.

The Dennis transporter has become the flagship for the Fellowship at Goodwood, and always draws a crowd as it often carries a competition car on the back, which really attracts attention. It’s one of 75 Dennis water tenders that were supplied to NWS fire brigades, and this one served the Sydney suburb of Busby, from November 1971 and, later, the rural townships of Warialda and Inverell. Its original Australian registration was FBY-446.
The vehicle was later purchased by classic car aficionado, Norm Bolito, who had ‘Dennis the Menace’ converted into his team’s new race car transporter, to take the team’s Chrysler competition vehicles to motor sport events across Australia.
In 2003, the Dennis was returned to the UK by its current owner, to transport his ex-Mike Hawthorn 1955 works Jaguar D-type.

This was quite a fitting development, given that this vehicle is powered by a 1964 4.2-litre Jaguar XK engine, and the 1958 Formula 1 World Champion Hawthorn worked at Dennis Bros, in Guildford, for a while. The vehicle is MoT’d to August 2020, and came with a V5C. It went on to sell for £25,300 and we look forward to seeing the vehicle around the scene. 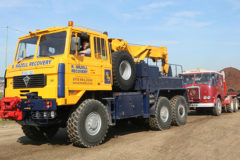