James Hendrie looks back over the career of the 1955 submarine USS Growler; the US Navy’s early attempt to field a cruise missile submarine. 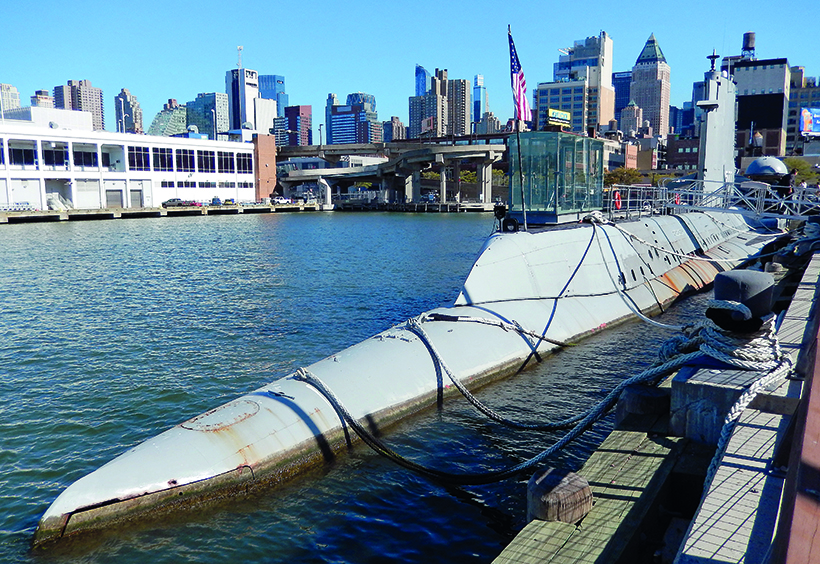 The preserved submarine USS Growler has been at Pier 86 in New York harbour since leaving active service with the US Navy.

USS Growler has, for over two decades, attracted countless visitors who have boarded her at Pier 86 in New York, where she is on permanent display alongside the much larger and perhaps better known aircraft carrier, USS Intrepid. However, USS Growler’s significance as one of the United States’ original trail-blazing nuclear-missile-carrying submarines cannot be underestimated. A Grayback class submarine, she was the fourth US Naval vessel to carry the name Growler.

When USS Growler was laid down in 1955 as the second of the US Navy’s Grayback submarines, the Cold War was at its height. She was one of the US Navy’s first attempts to offer a nuclear threat or deterrent against the Soviet Union from the seas or, more specifically, from under the seas, after she was converted to carry the Regulus 1 guided missile. Prior to this, the US nuclear deterrent had been land-based and, therefore, close to population centres.

Both USS Growler and her sistership USS Grayback were powered by conventional diesel engines, having been originally intended to be attack submarines before the US Navy, in an attempt to harness new technology, converted them to SSGs – guided missile submarines. For this role, they were extended by around 50ft and two cylindrical tube hangars were added in the bow. Each cylinder was 70ft long and 11ft high and could hold two Regulus nuclear missiles. 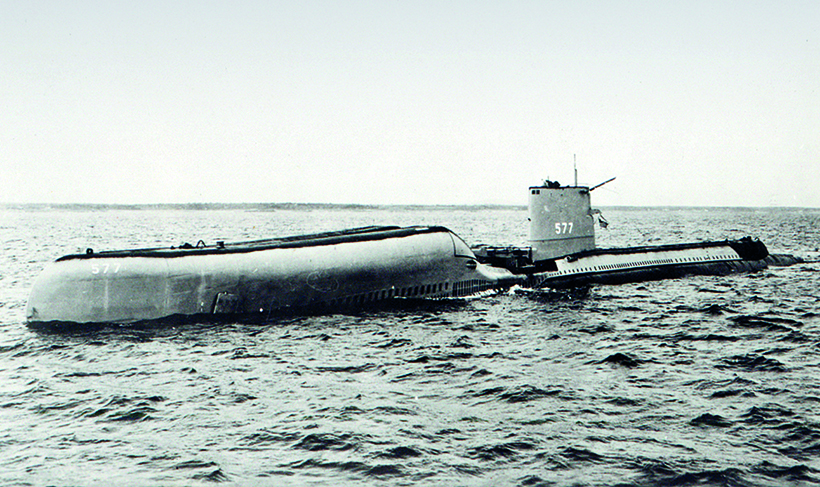 USS Growler was launched from the Portsmouth Naval Shipyard on 15 April 1958 and commissioned on 30 August 1958, with Pearl Harbor as her homeport. Sea trials started in November 1958 and, after successfully coming through these, she sailed for Roosevelt Roads Naval Station in Puerto Rico for a shakedown cruise, arriving there on 19 February 1959. She then returned to Portsmouth Naval Shipyard to take on board her missiles.

The crew trained in the complex launch procedures for the Regulus I and II guided missiles, which could take up 20 minutes. A specific, automated launching sequence had to be followed, with safety controls in place, when dealing with nuclear missiles. Unlike today’s nuclear submarines, which can launch missiles when the boats are under water, USS Growler’s missiles could only be launched when the boat was surfaced. The Regulus missile had a maximum range of around 500 miles, flying at Mach 0.85. It had a Mark 5 nuclear bomb, weighing 3,000lbs, with a 1.5-megaton warhead. 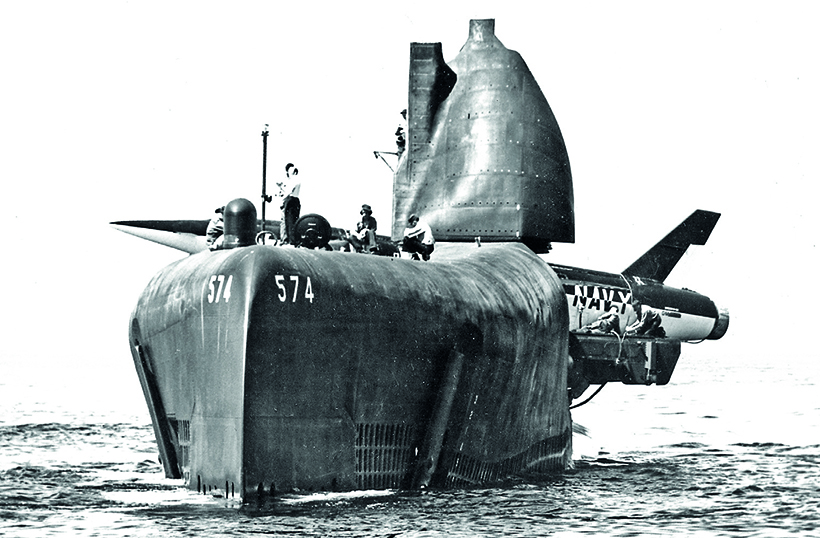 USS Growler with the Regulus 1 missile.

Following exercises using dummy warheads, USS Growler returned to Portsmouth before heading to the Pacific, via the Panama Canal, and Pearl Harbor, where she became flagship of Submarine Division 12. More exercises followed in the Pacific before she began her first Regulus Deterrent Mission. Such was the secrecy surrounding this that her crew were told not to discuss it. This first mission saw USS Growler away from Pearl Harbor from 12 March to 17 May 1960, carrying a full set of Regulus II nuclear warheads. She had to get very close to the Soviet shore to be in a position to launch her missiles and this placed the submarine and her crew in danger.

Serving on a diesel submarine would have been very different from serving on modern nuclear-powered submarines. Growler had 90 crew and they would have lived in cramped conditions, having to maintain almost total silence as the boat sailed submerged for many hours or even days on end.

The importance of the crew’s task was not lost on them. They recognised that they offered a credible threat to the Soviets that would make them think twice before contemplating launching a nuclear attack on the United States or her allies. Indeed, one crewmember made a logbook entry on New Year’s Day 1961, which said: ‘Not our idea of fun and good cheers, but doing our job to ensure many New Years’. 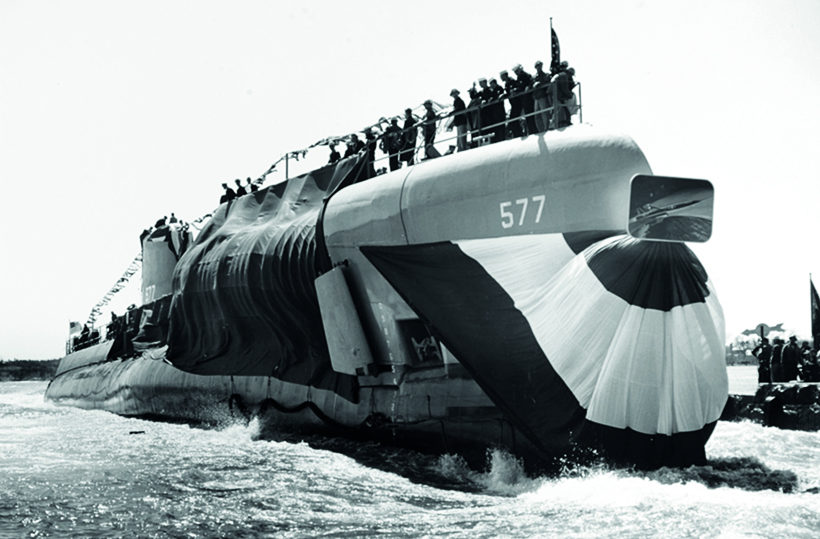 This entry was written on the occasion of USS Growler’s second deterrent mission. In all, Growler carried out a total of nine of these missions between May 1960 and December 1963. It seems that USS Growler’s objective was to destroy one of the major Soviet naval bases if needed.

The first mission at sea had shown that USS Growler had some issues operating in rough sea conditions, and she entered Pearl Harbor Naval Shipyard to receive some modifications and upgrades on her return. The height of her sail was increased to help the submarine’s stability, and extra ballast tanks were added to prevent rolling on the surface. Her navigation systems were changed, which involved USS Growler becoming the first US Navy vessel to have the LORAN C system installed.

USS Growler continued on her missions in a veil of secrecy until 1962 when, on 24 April at the Yokosuka Naval Base in Japan, she was unveiled to the world. The United States wanted to show off its latest weapon in the Cold War and, in particular, wanted the Soviets to be aware of the USA’s new deterrent. 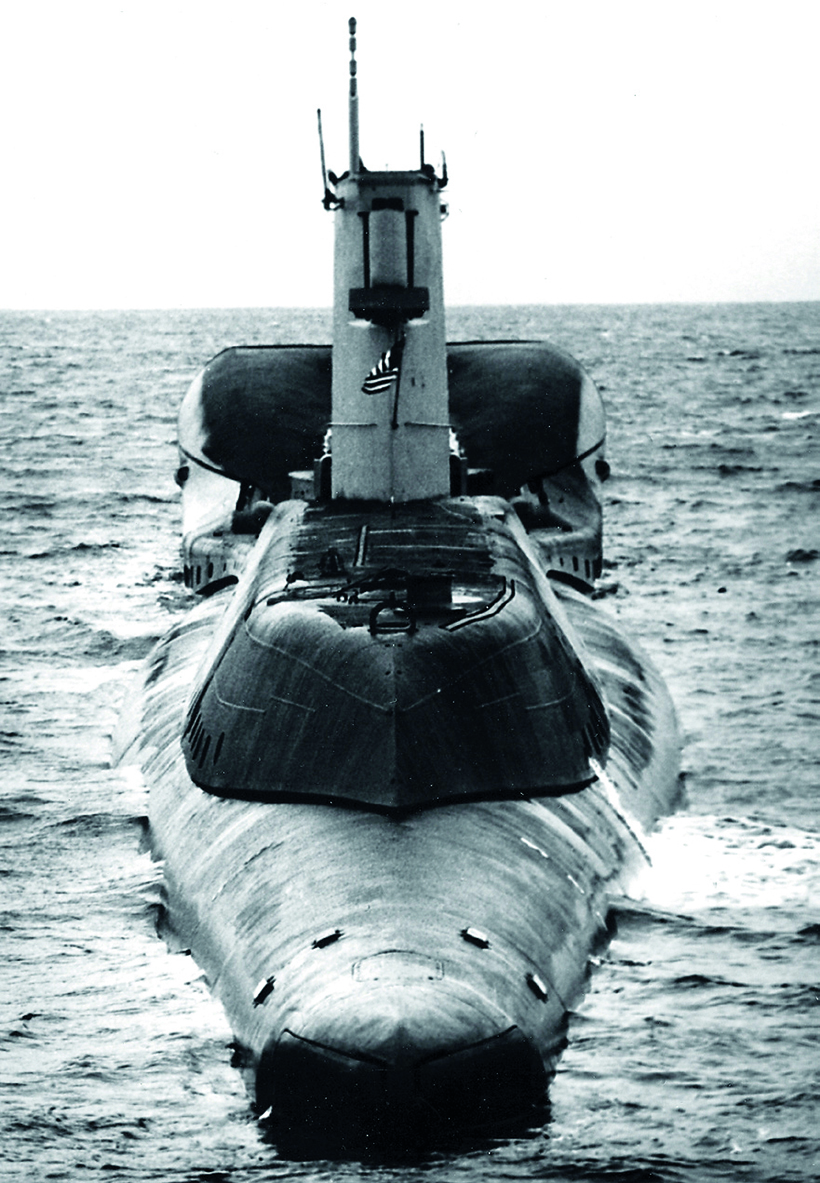 USS Growler was armed with Regulus I and II nuclear missiles and conventional torpedoes.

The value of USS Growler became apparent in 1962 during the Cuban missile crisis, when she was on a heightened state of alert and ready to launch her Regulus missiles if needed. Thankfully, they were not fired and the world breathed a sigh of relief when the two superpowers resolved their differences, and a conflict, one that could have been nuclear, was avoided.

By 1964, the new Polaris submarines were coming on stream, and both USS Growler and USS Grayback were taken out of service, with Growler being decommissioned on 25 May 1964 at Mare Island Naval Base, Vallejo, California. USS Growler was then placed on the Inactive Reserve Fleet and moved to the Puget Sound Naval Shipyard at Washington. For 25 years, she remained in reserve until Zachary Fisher stepped in to save her from being used for torpedo practise. 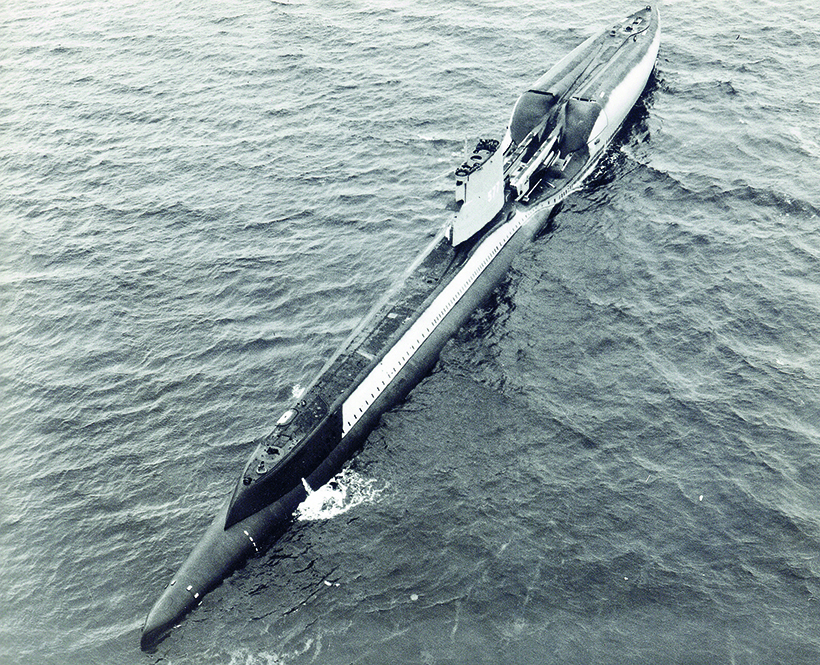 Fisher was the chair of the Intrepid Sea, Air & Space Museum in New York, and he wanted to take ownership of USS Growler to move her there. He was able to take ownership of USS Growler thanks to the passing of an Act of Congress in August 1988. It was a trip of over 6,000 miles for USS Growler to get to a shipyard in Florida, where extensive work was carried out both to make necessary repairs after her long time spent on the Reserve List, but also to convert her to allow visitors to come aboard.

This trip was one of the longest in naval history and began on 6 October 1988 with USS Growler sailing through the Panama Canal, which was reached in November. On reaching the Tampa shipyard, she entered dry dock, where interior renovations were carried out and the interior was painted. The submarine’s ladders were converted to stairways to ease access by visitors. In all, the work took six months. 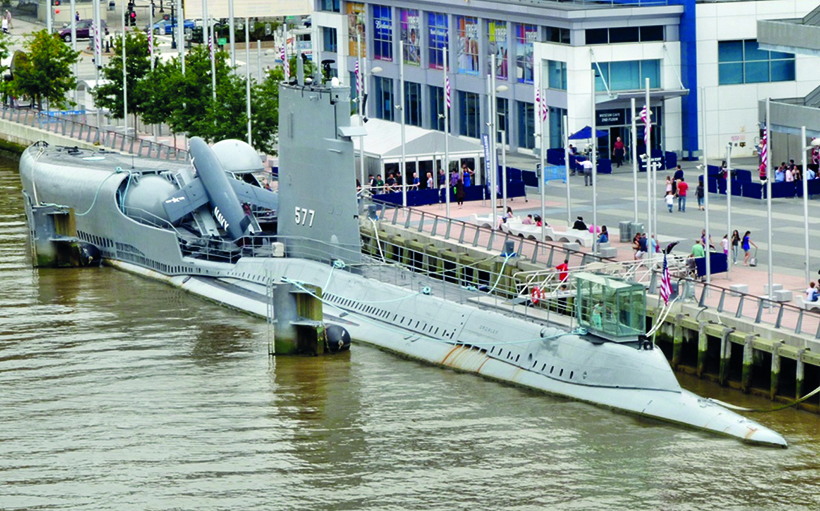 Growler had an extensive set of renovations carried out in Florida to allow her to be opened to the public at Pier 86 in New York.

She reached New York on 18 April 1989, 31 years since her commissioning, and the north side of Pier 86 became her final Home Port. She was opened up to the public that year to become the only US Navy guided missile submarine to allow public access. Visitors have flocked to her ever since to gain an insight into what it was like to be on board an early nuclear deterrent submarine.

In 2007, Growler was towed to Brooklyn so that renovation work and repairs could be carried out to the Intrepid Sea, Air & Space Museum complex. At Brooklyn, it was discovered that Growler had holes in her hull, and what were planned to be straightforward repairs became more costly and complex. In the end, the cost ran to $1.5 million, but she returned to Pier 86 in February 2009 in time to be open to visitors for the ‘Fleet Week 2009’ celebrations. 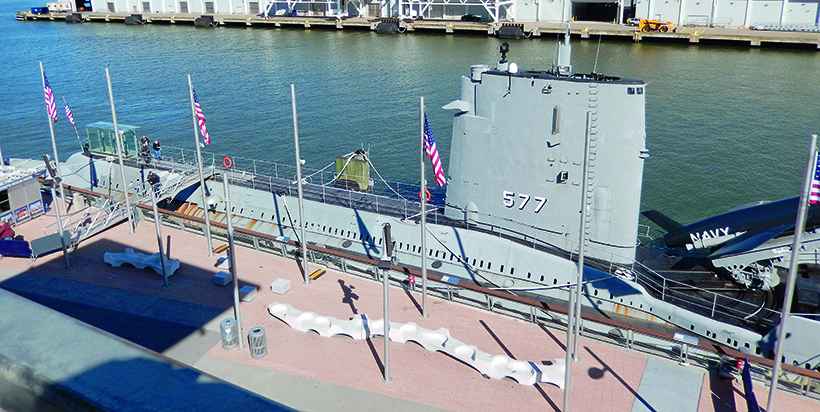 Growler in New York Harbor, as viewed from Intrepid.

Guides are on hand to explain the inner workings of this once highly secretive submarine. Visitors can access many areas of the boat, including the Control Room & Attack Center, where the steering of the submarine was carried out and the two periscopes are located.

The cramped crew mess and the small galley, where all the food was prepared, can also be visited, and visitors can appreciate just how hard it must have been to be cooped up in such small spaces while the boat was submerged, under strict rules of silence. The aft torpedo rooms further emphasise what a sacrifice the crew made, as nine submariners had their bunks here. 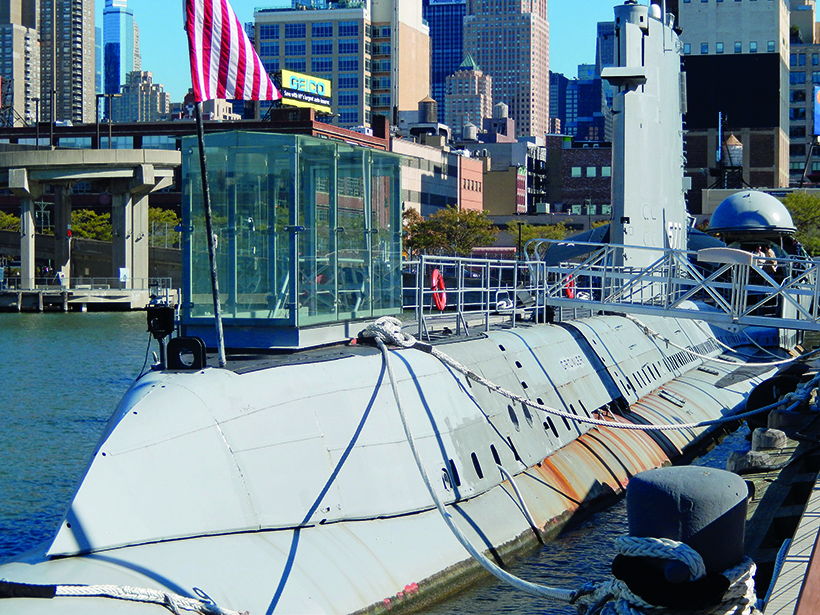 Growler is the only US Navy guided missile submarine open to the public.

USS Growler played an important role during the Cold War, and her importance to the US Navy during this time cannot be understated. The US Navy’s submarine fleet was tasked with providing a vital deterrent against the Soviet Union. There is no doubt that having such a capability made hostile actions by others futile because of the threat of a retaliatory strike from submarines equipped with nuclear missiles.

This article is from the latest issue of Ships Monthly magazine, and you can take advantage of a brilliant, money-saving subscription simply by clicking HERE 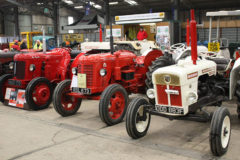 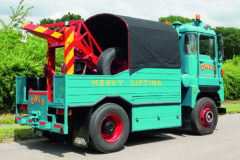