The model 225 was Caterpillar’s first excavator, and was instrumental in the company becoming a world leader, as Keith Haddock explains. 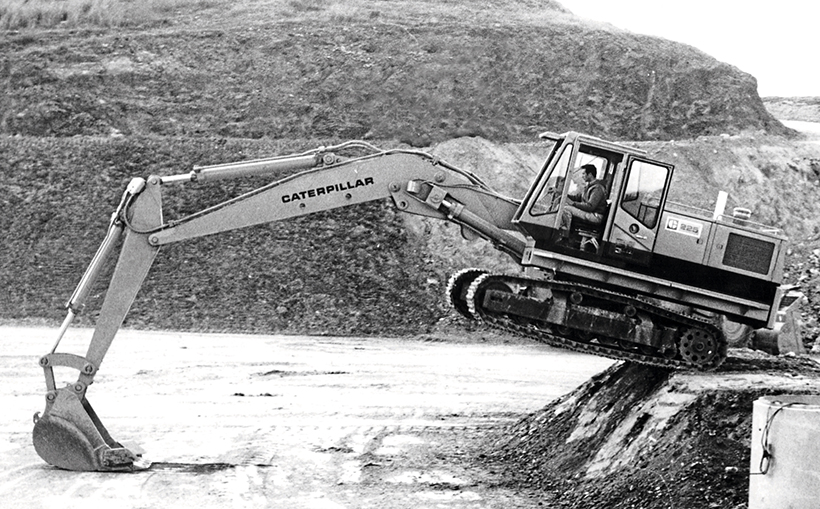 Caterpillar was a late-comer when it entered the hydraulic excavator field in 1972. The company had stayed on the sidelines and observed long-established American and British cable excavator manufacturers launch unsuccessful hydraulic machines – excavators with leaky hydraulic systems featuring low-pressure gear pumps, and undercarriages propelled through clutches and brakes from a hydraulic motor in the upper works. These companies with decades of experience had earned the highest reputation for reliable cable excavators but found difficulty in changing over to hydraulic power. Caterpillar also observed the rapid rise of Japanese and European manufacturers, especially from France (Poclain and Yumbo) and Germany (Demag and Liebherr). Their machines with high-pressure piston pump designs and undercarriages propelled with hydraulic motors in the crawler frames attracted Caterpillar. 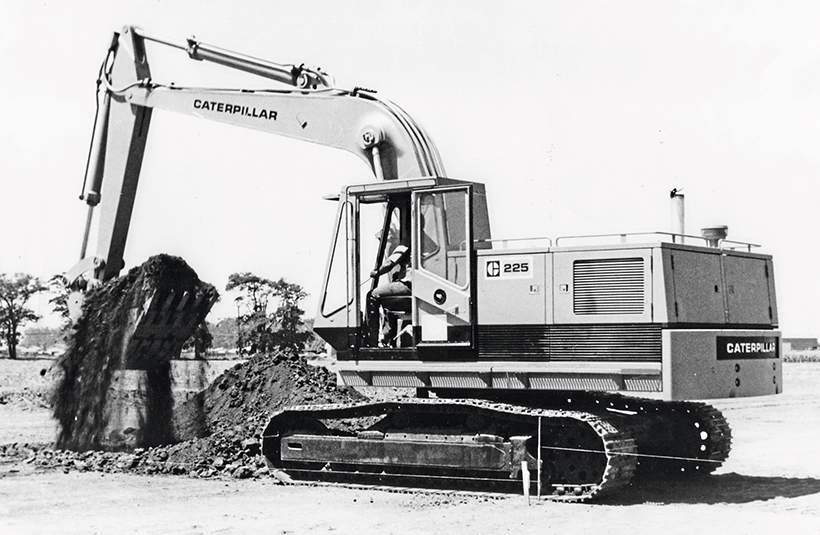 Pre-production Caterpillar 225 excavators were assigned to selected contractors for testing. They were monitored and evaluated by Caterpillar engineers.

So by 1972, the timing was perfect for Caterpillar to enter the excavator market. By then excavator users were well familiar with the advantages of hydraulic excavators, with most having tried at least one brand. They had ventured into a new world of precision engineering involving chrome-coated cylinders, intricate hose connections and pumps requiring very clean hydraulic oil. It was part of the learning curve when cylinders failed, systems leaked and operating costs were high. Contractors were waiting for a reliable machine that didn’t leak and could lower costs by working day-in and day-out with no more attention than regular maintenance schedules. Caterpillar’s model 225 did just that.  Its success allowed Caterpillar to catch up quickly with the leaders, already in their second or third generation machine designs. It set the stage for Caterpillar to become a world-leader in hydraulic excavators and to challenge the onslaught of European and Japanese-built machines sold worldwide. 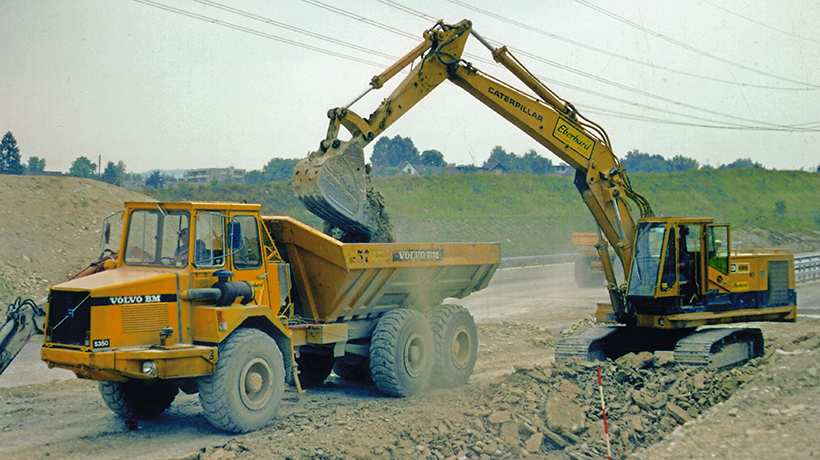 At first it was a tough sell for Caterpillar who had not marketed any kind of excavator before. The leading manufacturers were already well established so Caterpillar’s decision to enter this crowded market did not occur overnight. Interest was sparked back in the mid-1960s by a European market report forecasting a considerable increase in the use of these machines. This information prompted a year-long study in Europe and the United States which concluded that hydraulic excavators should become part of Caterpillar’s product line.

Design engineers immediately began feasibility studies and analysed each aspect of excavator design over a two-year period. Their conclusions shaped the basic configuration of a prototype Caterpillar excavator known as the X1 ready for testing in 1968. It was a significant stage in the project but full-scale production was still four busy years away. 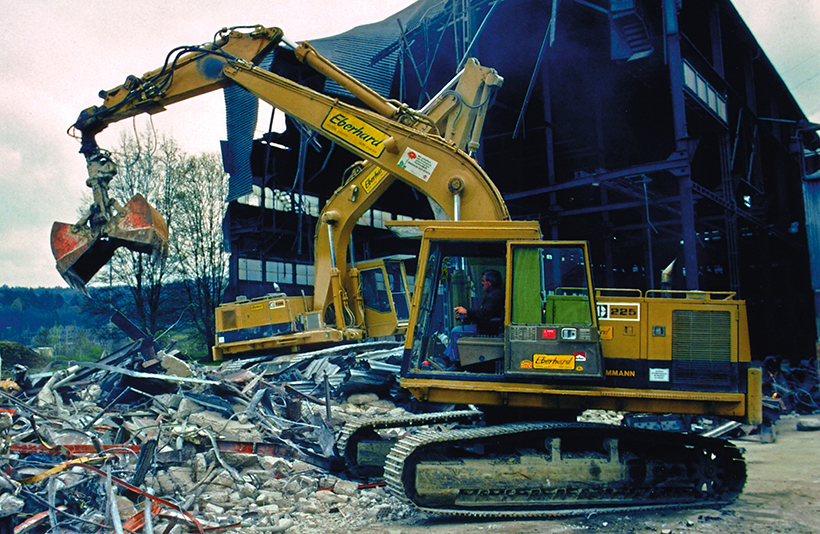 The company was well aware that reputations in the big machine market are hard-won, and notoriously vulnerable. These machines were going to carry the Caterpillar trademark into a new field, and elaborate precautions were taken to ensure the machine’s dependability. In a little under a year the X1 prototype completed 1000 operating hours on test, and from the information gained two more prototypes were developed: prototype X2 was built specifically for structural tests, and X3 was utilised to test the hydraulic designs in field conditions.  All three prototypes were tested over a two-year period and input received from a task-force of specialist engineers recruited throughout the Company.

Following this test period several second-generation prototypes were built, each one scheduled for testing in a different application and all subject to deliberate operational abuse. Each unit featured some design differences to determine the best combination of improvements evolving from the first-series prototypes. Contractors receiving test machines were asked to overwork the excavator and frequently move it from job to job.  Most of these contractors owned other excavators of the same capacity, so Caterpillar’s engineers were able to compare performance against competitive machines. 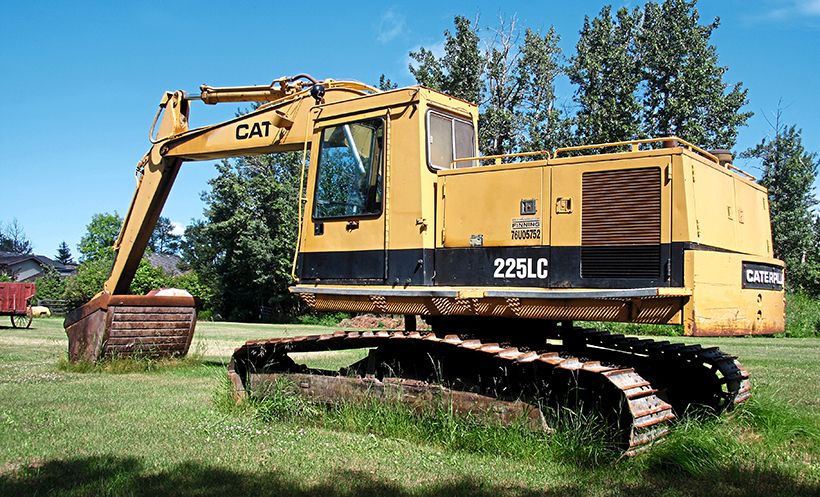 Concurrently with the American test programmes, machines underwent extensive site trials in England, Germany and Belgium, working in ground conditions from silt to rock. Each machine tested was subject to extensive feedback from contractors, and all comments were taken into consideration before the next phase of testing began.

To be absolutely sure the design was perfect, 15 pre-production machines built under production-run conditions were leased to contractors for a six-month period just prior to the official launch of the 225 in 1972. Caterpillar retained ownership of the machines and assigned a service engineer to each unit to make daily checks and report on its performance. The machines came through with flying colours, and when most of the contractors involved in the tests wanted to keep the machines, Caterpillar knew they had a winner. 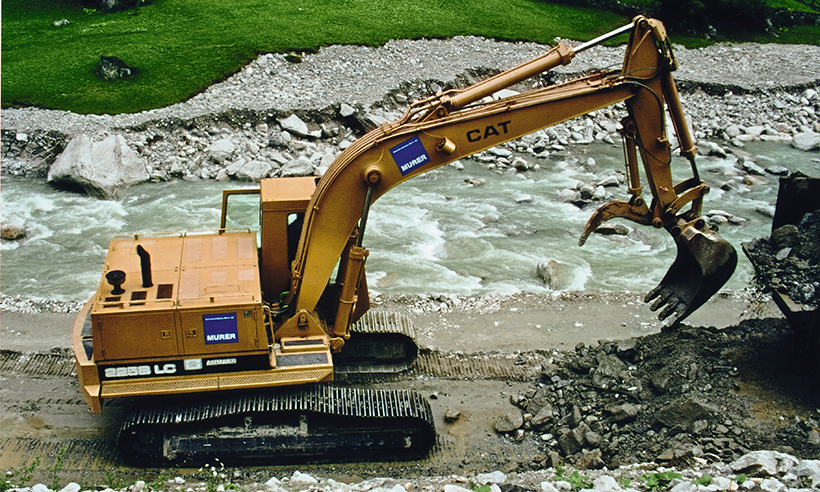 The Cat. 225B was launched in 1986. This 225B LC operates with a modified hoe bucket with grapple attachment. (Pic: Urs Peyer)

From the outset Caterpillar’s excavators were designated to be built on true production-line principles where sub-assemblies are built from individual parts and tested in feeder bays adjacent to the main production line. But putting excavators together by the sub-assembly method posed a problem of uneven weight distribution as units were moved along the production line. Conventional carriers, large enough to counter the heavy imbalance, proved impractical and the problem was finally overcome by using the hovercraft principle whereby an assembly platform floated machines smoothly along the line on a layer of pressurised air which automatically compensated for centre of gravity changes that occur at various assembly stages. 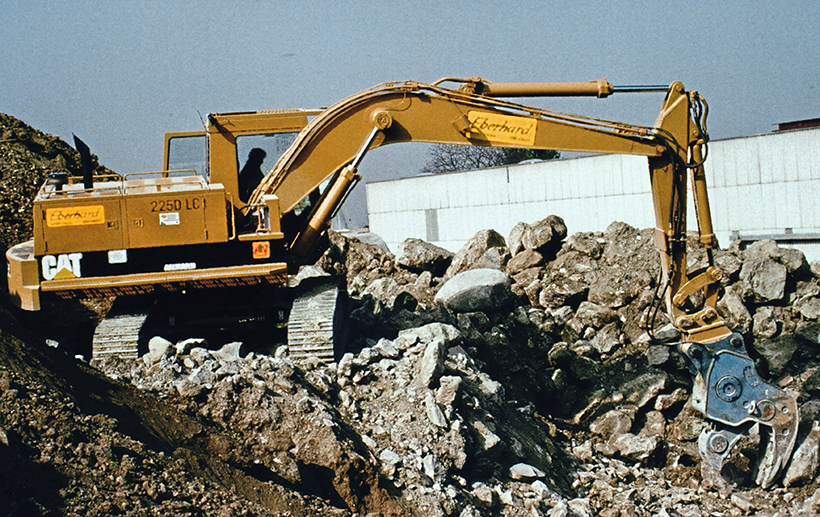 Caterpillar launched the 225 with a blaze of advertising in 1972. It came equipped with a 125hp 3160 diesel, weighed 24 tons and could dig to 21ft with an 8ft stick and 1-yard heaped capacity bucket. Hydraulic system pressure was set at 3,600psi. Just over a year after its launch, the 225 had tallied up some fifty machine sales in Europe alone. These were built in the United States but, in accordance with Caterpillar’s long-term plan, a new factory at Gosselies, Belgium, began manufacturing excavators for the European market by 1974. Caterpillar was able to boast that every part of the machine including hydraulic components, hoses and engine were Caterpillar products.

The success of the 225 and other leading-brand hydraulic excavators boosted the trend to displace cable-operated machines for all excavator duties except for the large machines found in surface mining. With one model under its belt, Caterpillar was quick to expand its excavator line. The following year saw the 43-ton 235, and in 1974 the big 245 weighing 72 tons completed the trio of first-series Caterpillar excavators. Next came the 19-ton model 215 introduced at the 1975 Conexpo equipment show in Chicago. Production of this model commenced in 1976 at Gosselies. 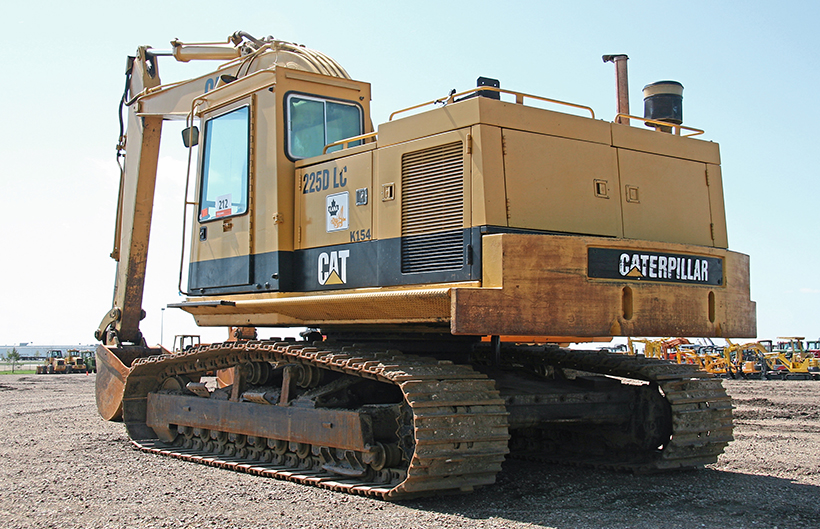 Various forms of Caterpillar’s 225 excavators were on the market for 19 years.

More excavators
Caterpillar must have been handsomely rewarded by its entry into the excavator market as there was a flurry of activity in the excavator department during the 1980s. In addition to developing more models in its own 200-series excavator line, such as the 219 and 229, it arranged to market the German-built Eder excavators beginning in 1984. These filled gaps at the small end of Caterpillar’s line and introduced the first rubber-tyred models to the roster. Also Caterpillar tapped into its Japanese connection for additional excavator models.

Back in 1962 a joint venture had been established with Mitsubishi Heavy Industries Ltd. for the production of crawler tractors. So in 1987, as an extension of this manufacturing arrangement, Caterpillar began importing excavators designed and built in Japan by Shin Caterpillar Mitsubishi Ltd. and sold them under the Caterpillar brand name. Designated the E-series, the line eventually consisted of nine models from the E70 to the E650 ranging in size from 7 to 69 tons in weight. With all this excavator activity going on, Caterpillar was offering no less than 33 different excavator models by 1987. 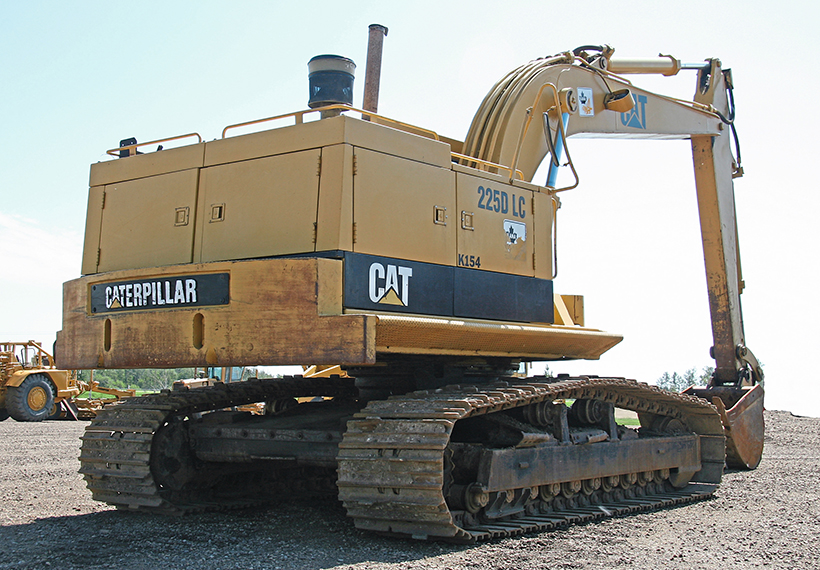 The original 225 was so well designed it remained in Caterpillar’s product line for 14 years. During that time its engine was changed to the model 3208 with power increased to 135 flywheel horsepower. A ‘Special Application’ version was also offered with 180 flywheel horsepower offering extra lift capacity. In 1986 the 225 was replaced by the 225B with Caterpillar 3304 DIT engine raising flywheel horsepower to 145 and, in heavy-lift mode, hydraulic circuit pressure up to 4,500psi. Other improvements such as operator comfort, undercarriage, and heavier fabricated cab brought the machine operating weight up to approximately 29 tons. 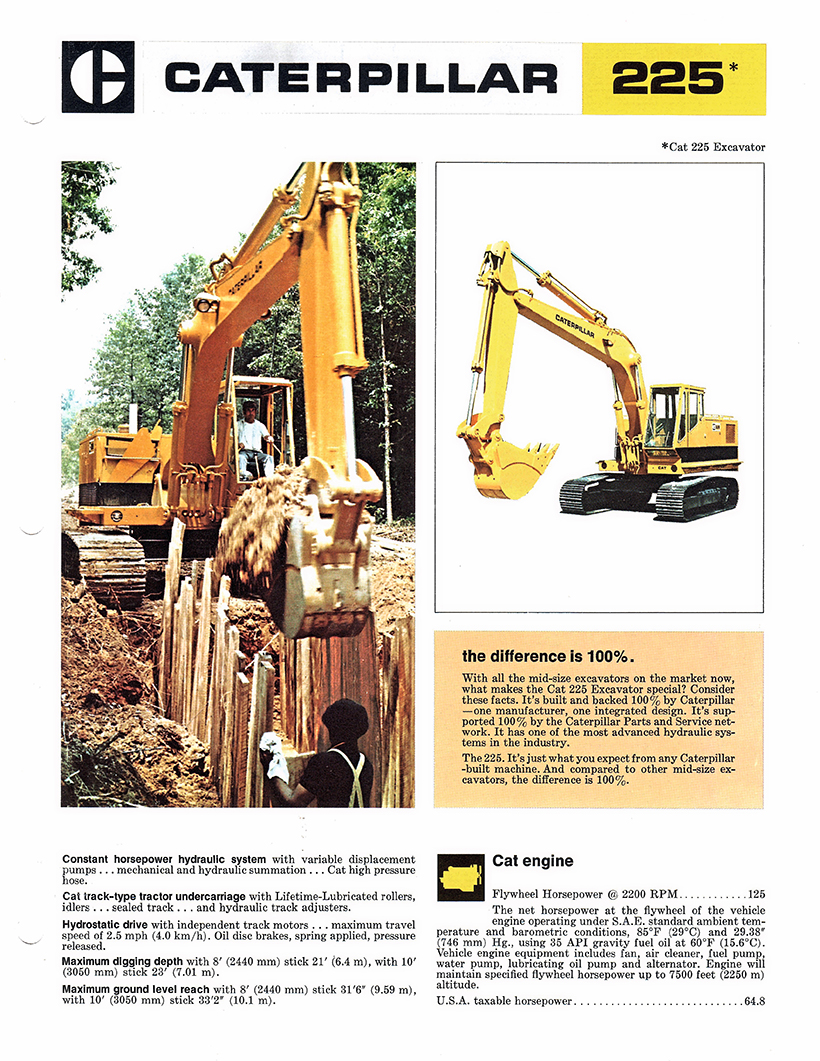 In 1989 Caterpillar saw fit to replace the 225B with the 225D. The engine remained the same but horsepower was billed at 165. Maintenance access improvements and further operator comfort were hallmarks of this model. In 1991 Caterpillar introduced the first of its 300-series excavators which would eventually take over the entire excavator line except for the 5000-series mining excavators. One of the first of this series, the 325, replaced the 225D, ending the 19-year reign of the 225 in its various forms, the machine that conquered the excavator market for Caterpillar. 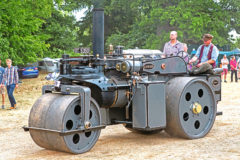 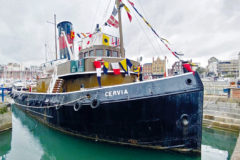