Once again we dip into Nina Smith’s wonderful postcard collection, this time for a selection of glimpses of classic London, all bristling with interesting vehicles. 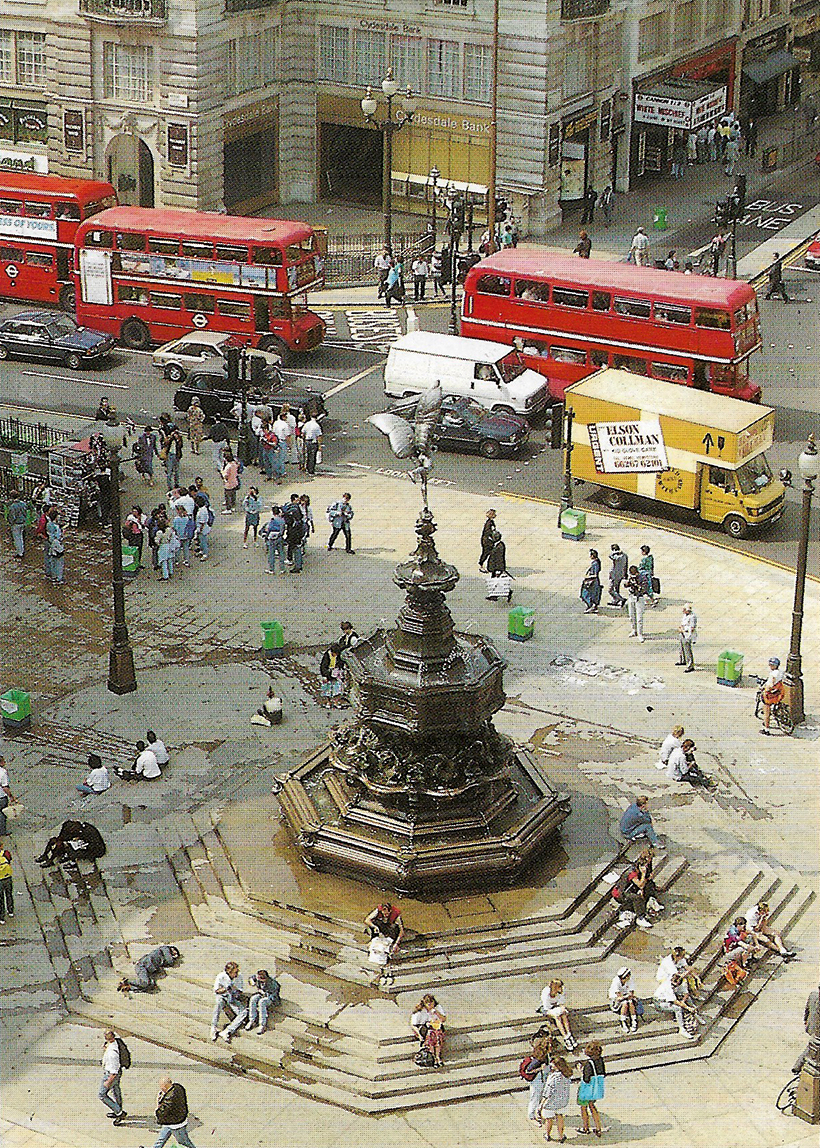 Glimpses of classic London: A relatively recent view, dated 1989 on the back of the card, of Piccadilly Circus. There are Routemasters, an RML ahead of two RMs, beyond a Mercedes 307, with a Luton box body, in the livery of Elson Coleman, and what looks rather like a Bedford CF, but it’s actually a Fiat or Citroen C35 of the time – now probably rarer than the CF in Britain. There’s also a Vauxhall Cavalier, FX4 taxi, Ford Escort Mk 3 and a Renault 16. Piccadilly then had a westbound buses-only lane, past the cinema showing White Mischief and the Clydesdale Bank – all changed only 20 or so years later…

Here’s a rather different take on the usual ‘postcard parade’ theme, which typically showcases images from mainly seaside towns from around the UK. This time we’ve gathered together a selection of postcard images featuring glimpses of classic London, dating from the 1930s to the 1980s.

While presenting the seemingly timeless scenes to be enjoyed by so many visitors – and residents, of course – these postcards illustrate an interesting progression. Not only are the changes in traffic obvious, but there are differences in the treatment of the photographs to spot, too.

There’s one black and white image, a couple that have been hand-coloured and, of course, the full colour photographs used to depict the more modern scenes, although at least one of these looks as if it’s also been ‘enhanced’.

As always with images of this sort, it’s fascinating to try and identify the vehicles on show as we ‘travel through the years’; just one of the many aspects that contribute to the enjoyment of collecting postcards which, of course, is why so many people do it these days. 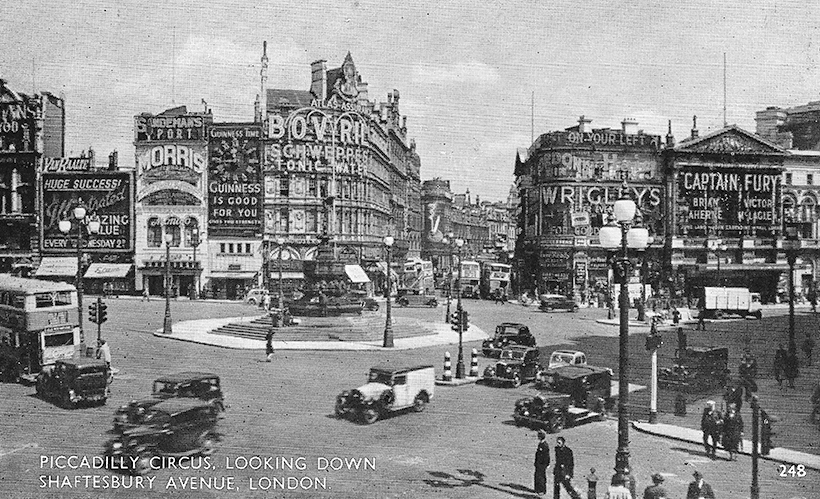 A late 1930s view of Piccadilly Circus, ‘looking down Shaftesbury Avenue’, from where two buses are seen emerging, side-by-side, which look like an STL and an LT. To the left of them is the rear of an open-staircase ST, while an LT six-wheeler disappears off to the left. To the right, under the advert for the film Captain Fury, the covered lorry could have been an early type of dustcart? In the centre of the photo, surrounded by Austin, Morris and a Hudson Terraplane car, plus a couple of Austin ‘Low-loader’ taxis, we can see a small van, perhaps a Commer, Singer or Standard of the era? 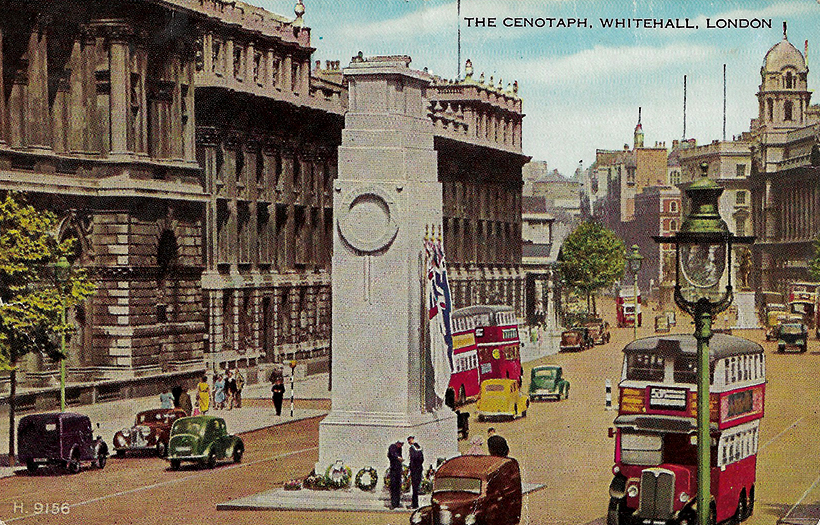 Dating from the immediate post-war years, this photograph has been hand-coloured, which has made some of the vehicles look a little misshapen! To the left of the Cenotaph, standing proudly in the middle of Whitehall, we can see a Ford E83W van, a Jaguar and an Austin 8 saloon. Beyond the Cenotaph, we can see the rear of a couple of cars; one possibly a Ford 10 (in an unlikely yellow colour) passing a couple of buses, including a ‘pre-war’ RT. Coming towards us, there’s an Austin 8 or 10 van and an LT six-wheeled bus, with what looks like a pre-war Dodge lorry and Austin ‘Three-way’ van among more traffic and buses further back. 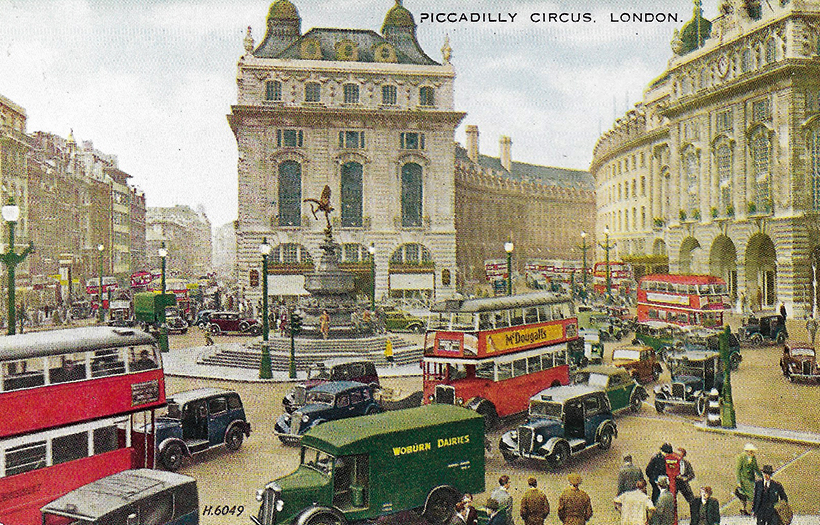 Another, early post-war view, which has been re-touched rather better, from our point of view, with the shapes of the vehicles unchanged. This is a view of Piccadilly Circus from almost opposite where the previous photo was taken. Prominent in the foreground we can see a Morris-Commercial LC van of Woburn Dairies, presumably no longer in business. Either side of this, beside and between the two STL buses, there are three, post-war Morris Oxford taxis, a design much overshadowed by the Austin FX3. There’s another, as well as some earlier Austin low-loader taxis, in front of the RT bus further back, coming out of Regent Street. As well as lots more cars and pedestrians, there’s what looks like an Austin or Bedford tilt-covered lorry plus an ERF coming out of Piccadilly on the left. A great cross-section of London traffic of the time. 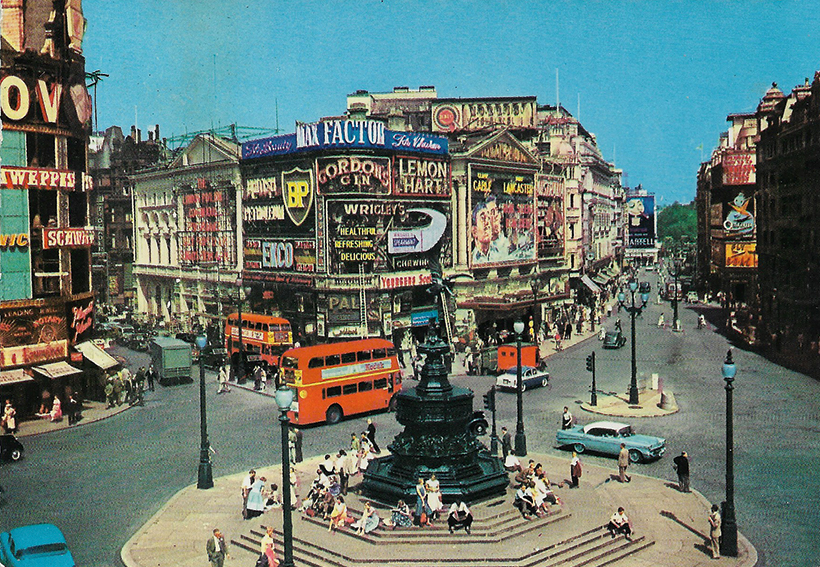 Moving on, we have another view of Piccadilly Circus – ‘the centre of London’s West End’ – with the statue of Eros centre-stage, probably taken in the late 1950s, from an upstairs window on the corner of Piccadilly and St James. Predictably, there are two London Transport RT buses in shot while, rounding Eros, we can see an American car, probably a 1956 Chevrolet. There’s also a Royal Mail Morris-Commercial LC, passing another parked van, a Humber Hawk and an older Standard saloon heading off towards Leicester Square, from where a maroon Bedford SB coach is approaching. What could be a BRS Parcels van is seen pulling into Shaftesbury Avenue, where there’s quite a queue of cars and vans behind the bus. 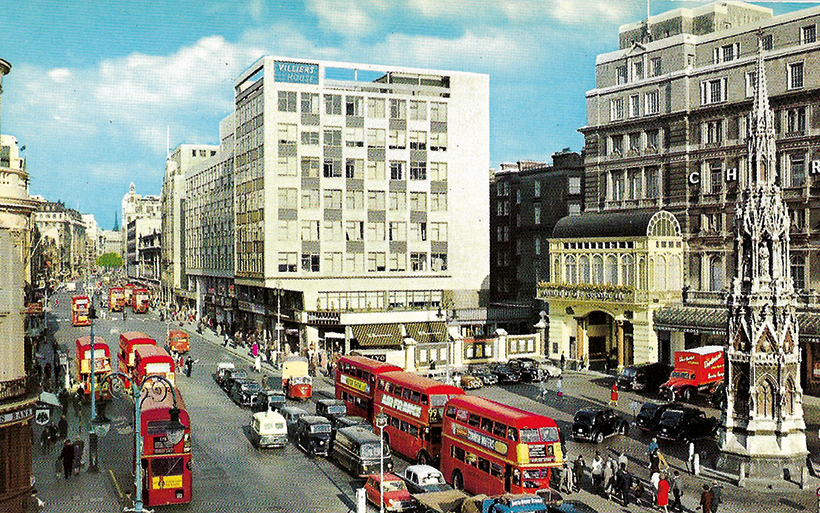 Into the 1960s, with a view of the Strand, with the Charing Cross Hotel above the railway station on the right. As well as the Victorian reproduction of the Eleanor Cross, the 1960s architectural ‘monstrosity’, Villiers House (still there) is prominent. The caption on the back of the card says the Strand was claimed to be the noisiest street in London at the time. There’s certainly plenty of traffic in this view, with a total of 11 RT-family buses, with an RTL at the front on the right. Beside it are a flatbed lorry, a Hillman Minx and a Mini, plus a Morris J2 van, FX3 and FX4 taxis, and a Bedford CA van waiting to turn into the station forecourt. Turning into the traffic queue is a British Railways Scammell Scarab with a van trailer, while a Royal Mail Morris LS approaches. A J Lyons van is glimpsed behind the three buses, while beyond the three FX3 taxis, there’s an Austin 302 box van in what looks like ‘Dewhurst the Butcher’ livery on the forecourt. 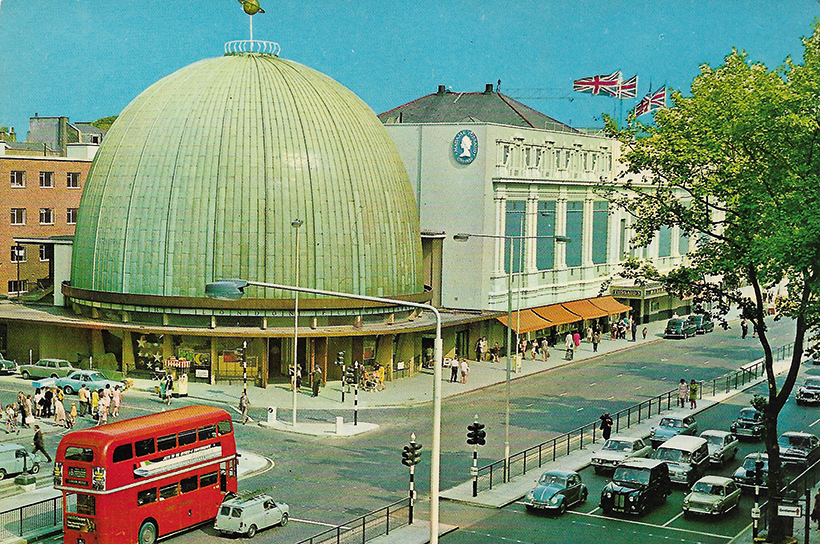 Now for a late 1960s view of Marylebone Road, with the Planetarium and Mademe Tussaud’s providing the tourist interest. The photo was taken from an upstairs window in the Polytechnic of Central London, where the editor studied for his transport degree a few years later. On the left we can see a Routemaster bus, flanked by a grey Minivan. There’s another parked on the service road to Baker Street Station on the far left, with a ford Escort and Vauxhall Viva beyond the pedestrians. Two FX4 taxis wait outside Madame Tussaud’s but, more interesting is the Winchester cab waiting at the lights, bottom right, between a VW Beetle and Austin 1100, in front of a Bedford CA van, surrounded by a Rover 2000, another Viva, an Anglia Estate, Hillman Minx, Morris 1000 and something big and American… 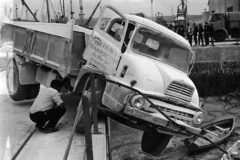 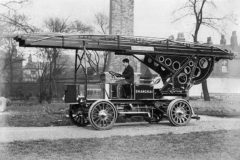