One of the UK’s most famous, volunteer-run preservation railways was opened by enthusiasts 60 years ago. Colin Tyson recounts the story of The Bluebell Railway. 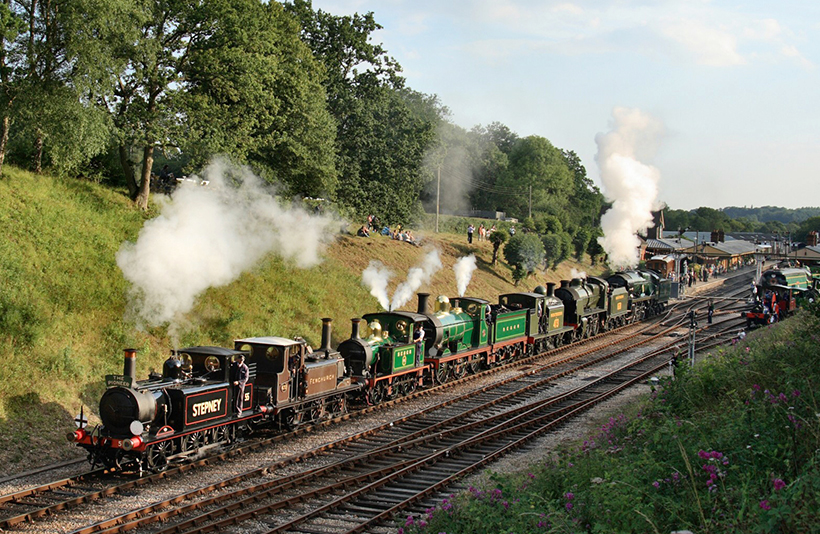 The Bluebell Railway: A sight to look forward to once again. This is a scene from the Bluebell Railway’s 50th anniversary locomotive cavalcade, at Horsted Keynes, which took place in August, 2010. (Pic Phil Barnes)

Friday, August 7th, 2020, marks 60 years since the Bluebell Railway ran its first public train. At 2.30pm on that day in 1960, LBSCR ‘Terrier’ No. 55 Stepney headed a train consisting of two coaches – LSWR Third No. S320 and Maunsell Brake No. S6575 – with SECR P Class No. 323 at the rear, from Sheffield Park to a makeshift halt just outside Horsted Keynes, running in push-pull mode. For the rest of the 1960 season this train formed the railway’s entire rolling stock.

The Bluebell thus became the first society to show to BR’s Southern Region management at Waterloo, that volunteers could take over and operate a section of its former line – something that would be followed by several others around the UK before the end of that decade. So what happened to trigger that momentous event in the history of railway preservation?

Rural backwater
The little-used, former secondary route between Lewes and East Grinstead, remained a rural backwater and, in 1954 BR proposed the closure of the line, with the date set for May 28th, 1955. Closure was originally scheduled for June 13th, but an ASLEF strike brought the line to a premature end.

The local press had caught on to the ‘Bluebell’ name after a resident suggested that the trains were slow enough to get out and pick bluebells, although enginemen and railway staff had also used the nickname ‘Bluebell and Primrose Line’ to describe the route. 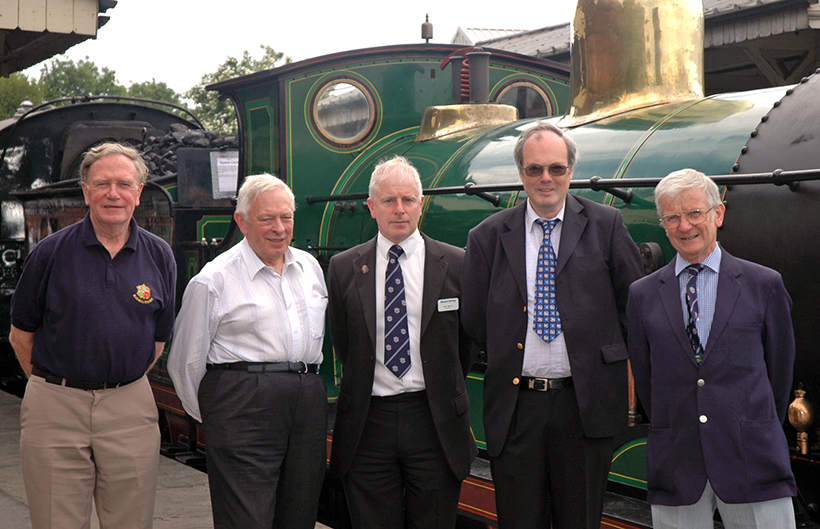 The four founding students that called the first meeting to save the ‘Bluebell Line’ pictured at a reunion in 2004. From the left: David Dallimore, Alan Sturt, Chris Campbell and Martin Eastland with (centre) Society chairman, Roy Watts. Alan and Martin have since died. (Pic: Colin Tyson)

But BR had reckoned without local Chailey resident Miss Rose Ellen Margaret (Madge) Bessemer – granddaughter of Henry Bessemer, famous for introducing his process for making steel from pig iron. She was chair of the fighting committee against closure of the line, and had spotted a flaw in the closure procedures being followed by the British Transport Commission. The Act of Parliament that had authorised the opening of the line hadn’t been repealed through subsequent ownerships to provide four trains a day each way; and was therefore, illegal.

The discovery proved a sensation, and the press lapped it up. Reluctantly, British Rail began running trains again from August 7th, 1956, and Miss Bessemer was besieged as a celebrity by the press on the first train that day. However, BR replied by acting in the spirit of the original Act of Parliament, and provided just four trains a day, at inconvenient times for either work or leisure purposes, What’s more, the trains being run were only required to stop at the stations mentioned in the original Act – Newick & Chailey, Sheffield Park, Horsted Keynes and West Hoathly. All of this resulted in the schedule being dubbed the ‘Sulky Service’. 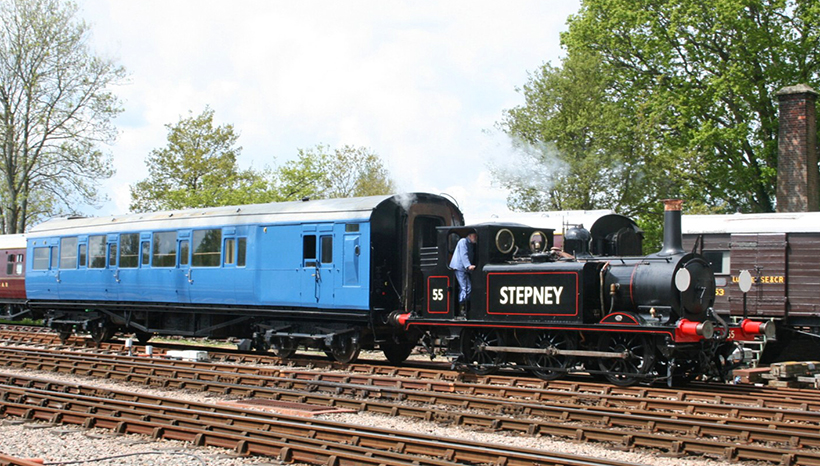 A ‘first train’ recreation on May 17th, 2010, at the 50th anniversary of the Bluebell’s first locomotive LBSCR ‘Terrier’ No. 55 Stepney arriving on the line, together with one of the original carriages SR No. S6575, with both loco and carriage repainted in 1960s condition. (Pic: Andrew Strongitharm)

The final departure
In March 1957, a Bill was presented to Parliament by the BTC to repeal the original 1878 Act. This meant that BR could now close the line legally and, following a three-day public inquiry, it was announced that the last trains would run on March 16th, 1958, for the second and final time. The final trip of the day, the late-running 4.28pm departure from East Grinstead, saw three extra coaches added to the six-coach formation, amid much fanfare.

And that would have been the end of it all, if it hadn’t been for four Brighton students – Chris Campbell, David Dallimore, Martin Eastland and Alan Sturt – who arranged for local enthusiast and professional railwayman, Bernard Holden, to chair an initial meeting that formed The Lewes & East Grinstead Railway Preservation Society. 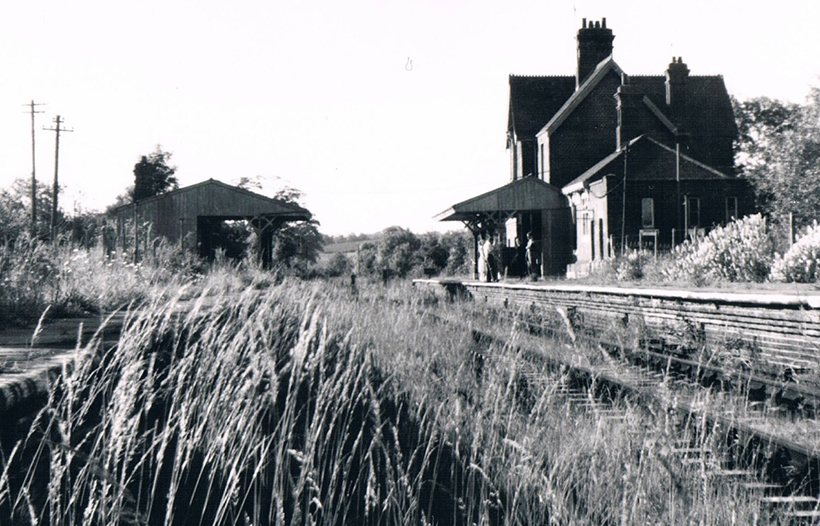 Members of the new committee stand on the down platform, probably wondering what on earth they’d taken on! (Pic: The Bluebell Archive)

Bernard was born in the station house at Barcombe, on the ‘Bluebell’ line, during the period that his father was station master there, and he knew the line well. This meeting was open to all those interested in running the line privately (utilising a GWR diesel railcar!), and was held on March 15th, 1959, at the Church Lads’ Brigade Hall in Haywards Heath. A committee was chosen and subscriptions were subsequently taken.

Member number one was Charles Hudson, who was to head-up the line’s S&T Department, and is now a Vice President of the Society. Charles said: “I arrived at the hall after the meeting had started, so I took a vacant seat in the back row, by the door. Behind me was a card table which, after the meeting, became the new membership secretary’s table, and I was able to turn round in my seat and place my pound note on the table, and thus became member No.1 in the receipt book!” 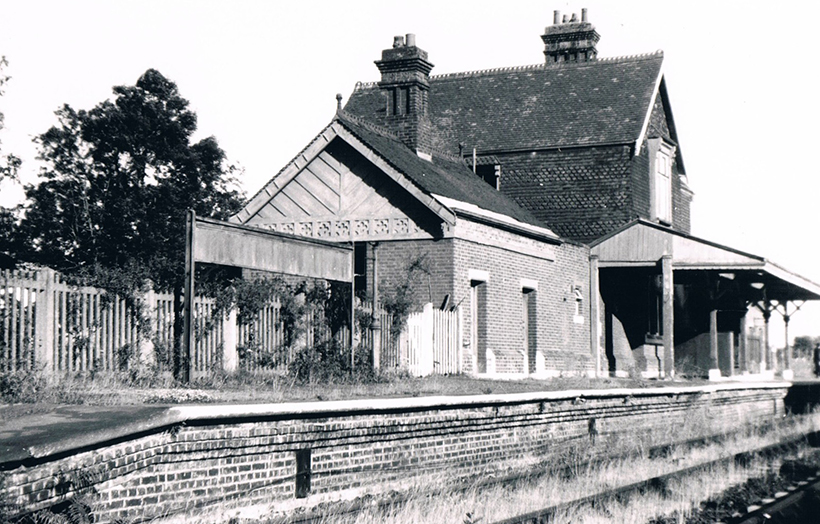 Sheffield Park, bereft of name and overgrown with weeds. (Pic: The Bluebell Archive)

The BRPS is born
A further committee meeting, held at the same location on June 1st, shortened the new organisation’s name to the Bluebell Railway Preservation Society. It was also decided to focus the initial efforts on the section of line running from Sheffield Park (close to a main ‘A’ road, and where there was a good water supply for engines), to Horsted Keynes. The connection to the outside world from Horsted Keynes – the junction for the branch to Haywards Heath, via Ardingly – was to prove invaluable in bringing redundant engines and rolling stock to the line, before its closure in 1963. 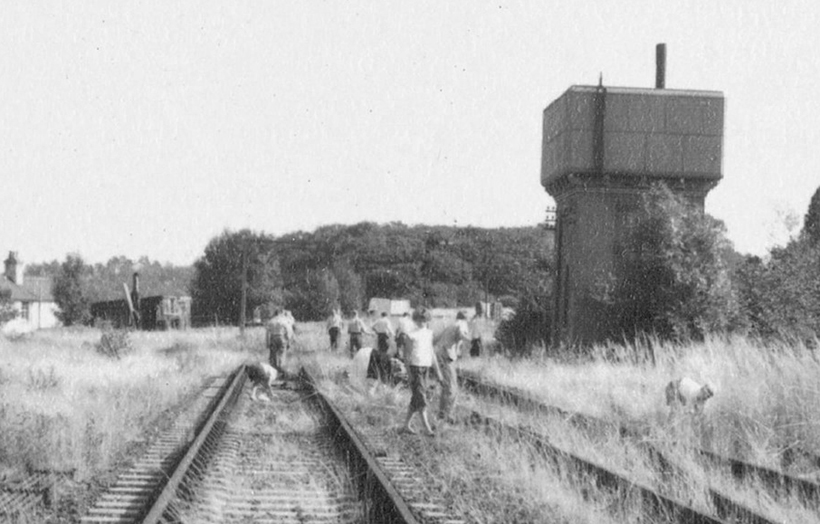 Looking south from Sheffield Park station as volunteers arrive to clear the tracks of weeds – by hand! This is now the site of the railway’s locomotive depot and workshops. (Pic: The Bluebell Archive)

The newly-formed committee paid a visit to a very neglected and forlorn Sheffield Park station in June, 1959. BR was asking for £34,000 for the 4.8-mile section, and the Society had just £89 in the bank! However, a five-year lease on the line was arranged with BR, which gave the Society some breathing space during which to start raising funds.

On July 12th, the Society ran its first fund-raising rail tour, starting at Tonbridge, to East Grinstead then down to Horsted Keynes, where the chairman addressed the audience before the train continued, via Haywards Heath and Lewes, to Tonbridge. The Society had 400 members, but it was hoped that this would soon increase to 1,000. 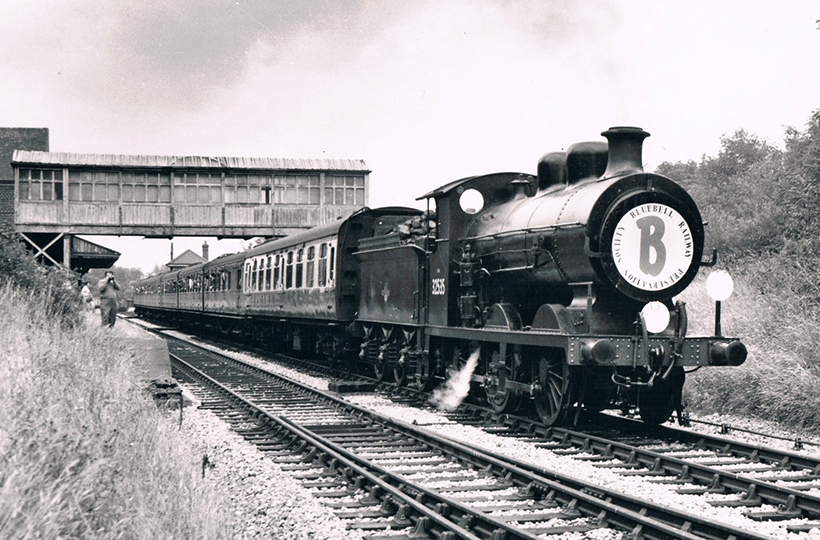 Then, on September 27th, there was a Rally Day held at Sheffield Park station, at which a pump trolley was used to demonstrate the recently-reinstated signalling equipment and pointwork.

Membership had risen to 600 by the end of 1959 and, at a meeting held in the grand surroundings of the Royal Pavilion, in Brighton, on February 19th, 1960, a gathering of 200 members was told that the five-year lease would not become operative until a Light Railway Order had been granted. Rolling stock needed to be acquired, a halt needed to be constructed at New Road, Horsted Keynes (for trains to terminate a few hundred yards south of the BR station), and a loco shed and inspection pit needed to be built at Sheffield Park. 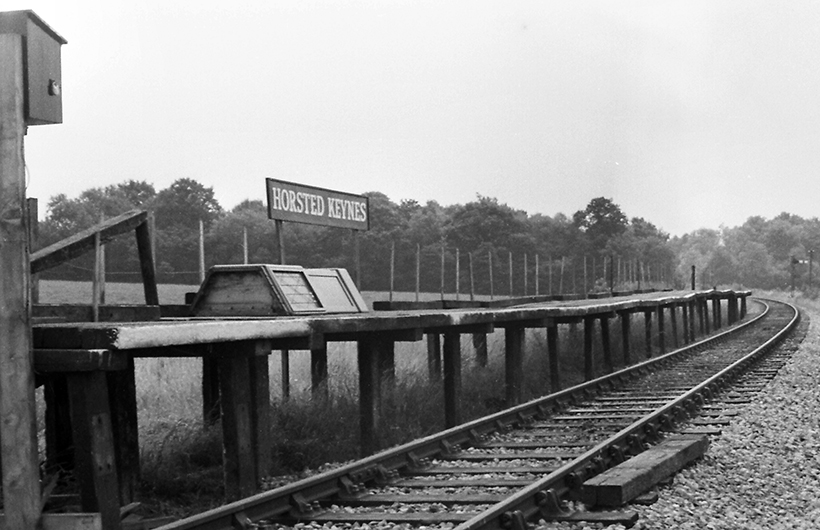 First loco arrives!
On May 7th, the BRPS acquired its first locomotive – LBSCR No. 55 Stepney – which arrived from Brighton under its own steam to Horsted Keynes, together with coaches S320 and S6575. SECR P Class No. 323 arrived on June 27th. The Ministry of Transport Inspection took place on July 9th, and was passed with flying colours to enable a Light Railway Order to be granted.

Thus, the Bluebell Railway was formally opened on August 7th, with more than 2,000 people present at Sheffield Park, along with press and TV cameras. A major landmark in British railway history had been achieved. Just four months later, at the end of 1960, a total of 12,000 people had travelled on the line, gross receipts exceeded £2,000, and the Society’s membership stood at more than 1,500. 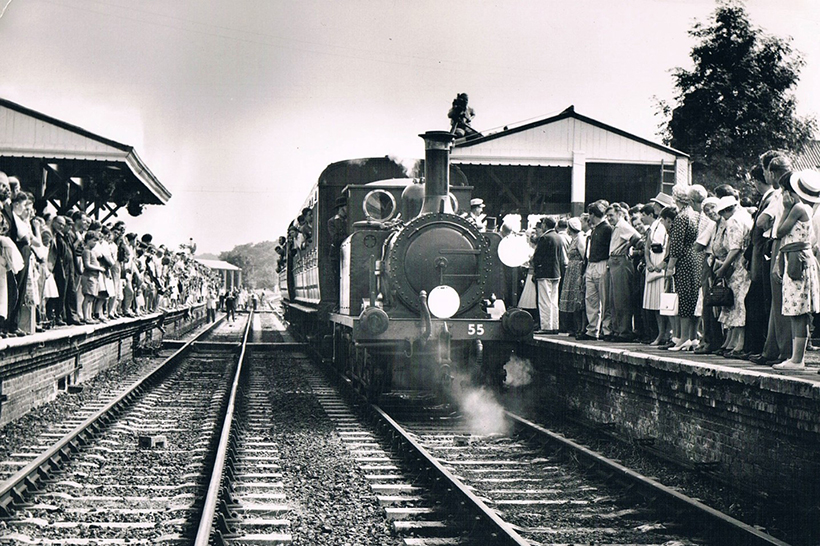 Crowds line the platforms at Sheffield Park station, to witness Stepney depart on Opening Day, August 7th, 1960. No. 323 is at the rear of the two-coach train. Note the TV cameraman on top of the platform canopy. (Pic: The Bluebell Archive)

Bearing in mind that the public and enthusiasts would still be able to find pockets of steam on the Southern Region for another seven years, would the novelty value of riding on a private line quickly dissipate? The 1961 season would prove as important as the previous year. The season was boosted on March 2nd by the arrival of the ‘Chesham’ coaches – four close-coupled former Metropolitan Line’s Chesham branch carriages, which had been purchased from London Transport at a cost of £65 each. These were immediately pressed into service.

The season started on April 1st and, with the recently-arrived SECR No. 27 Primrose, trains ran with Stepney and Primrose at the front and Bluebell at the rear, behind the four new ‘Met’ coaches. An appeal for funding was launched to secure North London Railway No. 55850 and LSWR Adams Radial tank No. 30583. The ‘Adams’ arrived on July 12th, in steam from Brighton, via Ardingly.

From October 29th, the Bluebell was finally given access to Horsted Keynes station by BR, sharing the station with the electric service from Haywards Heath. Many early visitors to the railway recall arriving by train from Haywards Heath in this way, prior to mass car ownership.

Successful from the start
An impressive 92,000 passengers were carried in 1961 and, since then, the railway has never looked back. After much tin-rattling and careful budgeting, the freehold of the line from Sheffield Park to Horsted Keynes was purchased for £43,000 in October 1968, which included the two stations and 10 railway-owned staff cottages – six at Horsted Keynes and four at Sheffield Park.

The early part of the 1960s also saw delivery of locomotives to the railway that had nowhere else to go at the time. While the list included several industrial examples that have since moved on to more appropriate locations, there were also such gems as GWR 4-4-0 ‘Dukedog’ No. 9017 Earl of Berkeley. 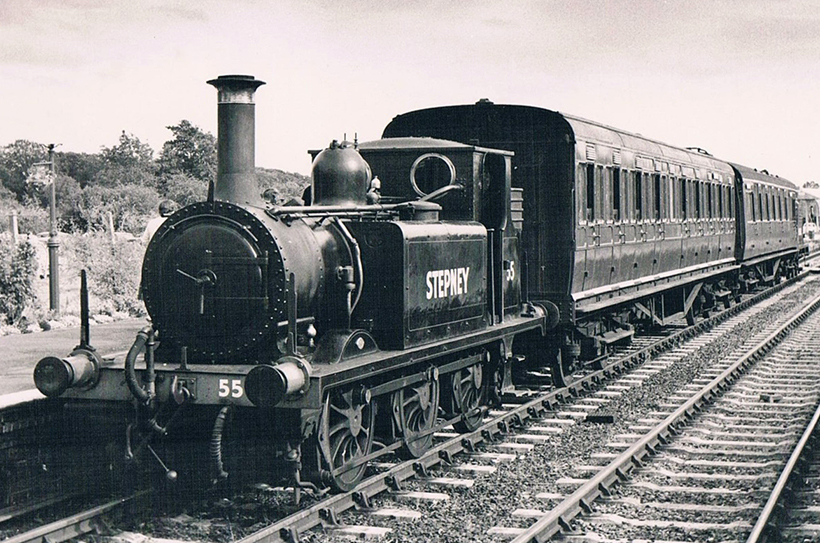 During the 20 years between the 1970s and the 1990s, there was considerable growth in supporting infrastructure, and steps to extend the line to join the national network at East Grinstead, were taken. This was finally achieved in 2013.

The historic collection now runs to some 32 steam locos, 91 carriages and 83 wagons/vans. Recent developments have included the provision of additional undercover accommodation for heritage assets, and secondary railway-themed attractions help boost the appeal to family and enthusiast visitors alike. 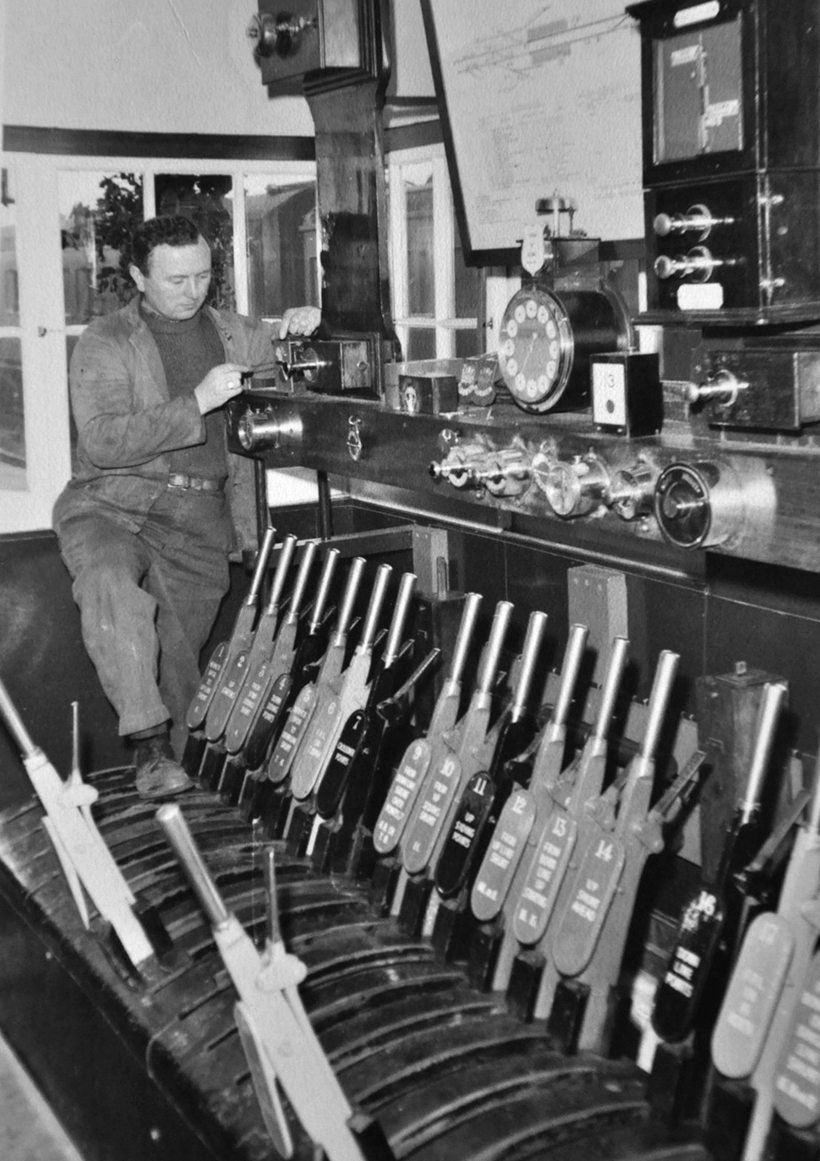 Unfortunately, the long weekend of celebrations that had been planned to mark the 60th anniversary have had to be cancelled, but the milestone will certainly be celebrated next summer, during the Society’s 60th year of running. No dates have been announced so far but, in the meantime, the Society wishes to thank all its supporters who have given so generously to ensure that the railway has met – and exceeded – its Covid-19 Emergency Appeal target of £300,000. 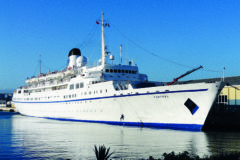