Mike Neale tells the incredible story of how a 1939 Morris Commercial CV11/30 ambulance survived, against all the odds. 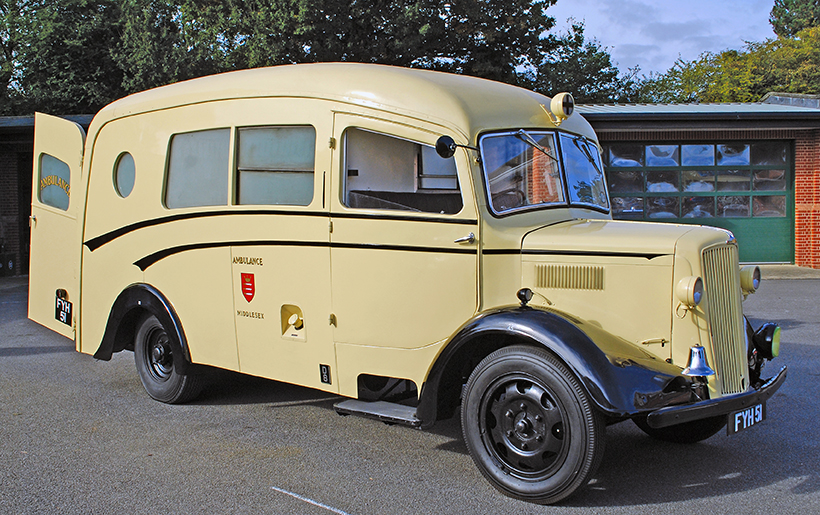 Mark Bailey’s 1939 Morris Commercial CV11/30 ambulance, which has survived against the odds.

The CV model designations indicated the engine type, wheelbase and payload rating. The CV had a four-cylinder 3,519cc sidevalve engine until 1949 when a long-stroke four-cylinder 3,770cc unit was fitted, whilst the CVS (S for Six) had a six-cylinder 3,485cc sidevalve. Wheelbases were 9ft 6ins, 10ft 6ins, 11ft 6ins or 13ft 6ins, rounded down to the nearest foot in the designation. Payloads were 30cwt, 40cwt, 3-4 tons or 4-5 tons.  CV11/30 would thus be a four-cylinder model with an 11ft 6ins wheelbase and a 30cwt rating. Production of the CV range ended in 1949. 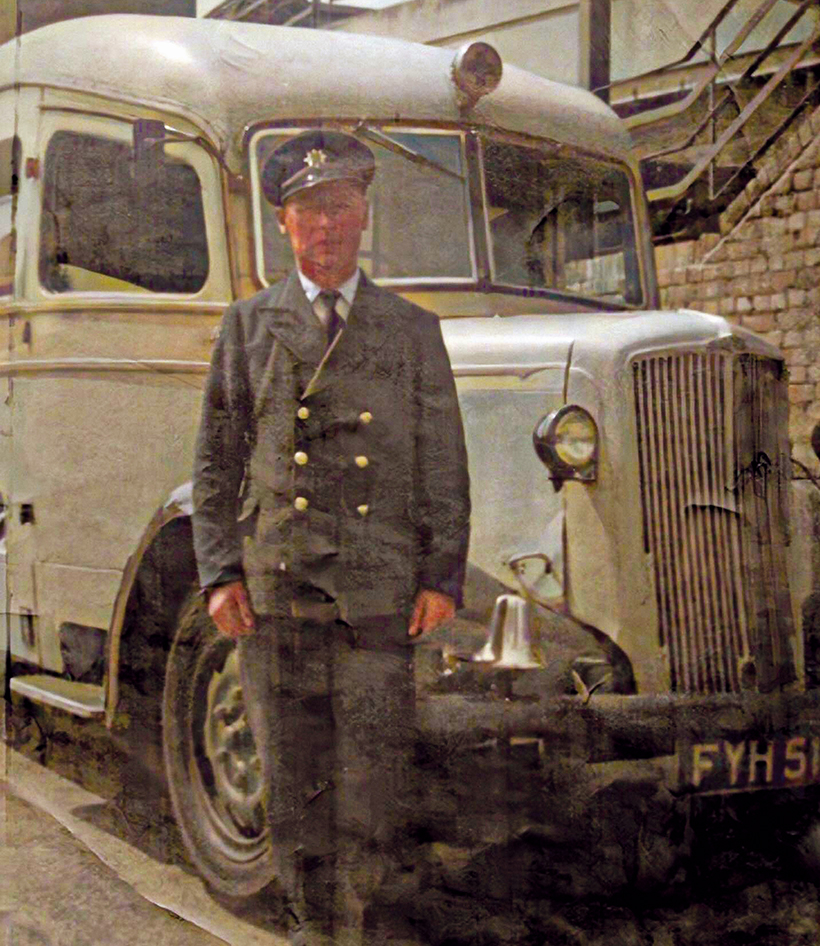 FYH 51 c1950 in original grey livery and with her regular driver, Richard Mason.

The 1939 CV11/30 ambulance featured here actually started life as a utility fire engine, known as a Heavy Unit (or HU), painted Battleship Grey.  A separate engine-driven pump was mounted on the rear, as well as the engine to drive the vehicle itself.  It was one of a batch of a few hundred similar vehicles built at the start of World War 2 and sent to different fire brigades across the country.

FYH 51 was originally allocated to the Auxiliary Fire Service section of the London Fire Brigade.  It was unfortunately blown up and extensively damaged during the Blitz in 1940-41.  The fate of its crew is not known.  It was rebuilt, losing its original wings and 11in headlamps, and now wears wartime 6in headlamps and sidelights salvaged from a Bedford HU. 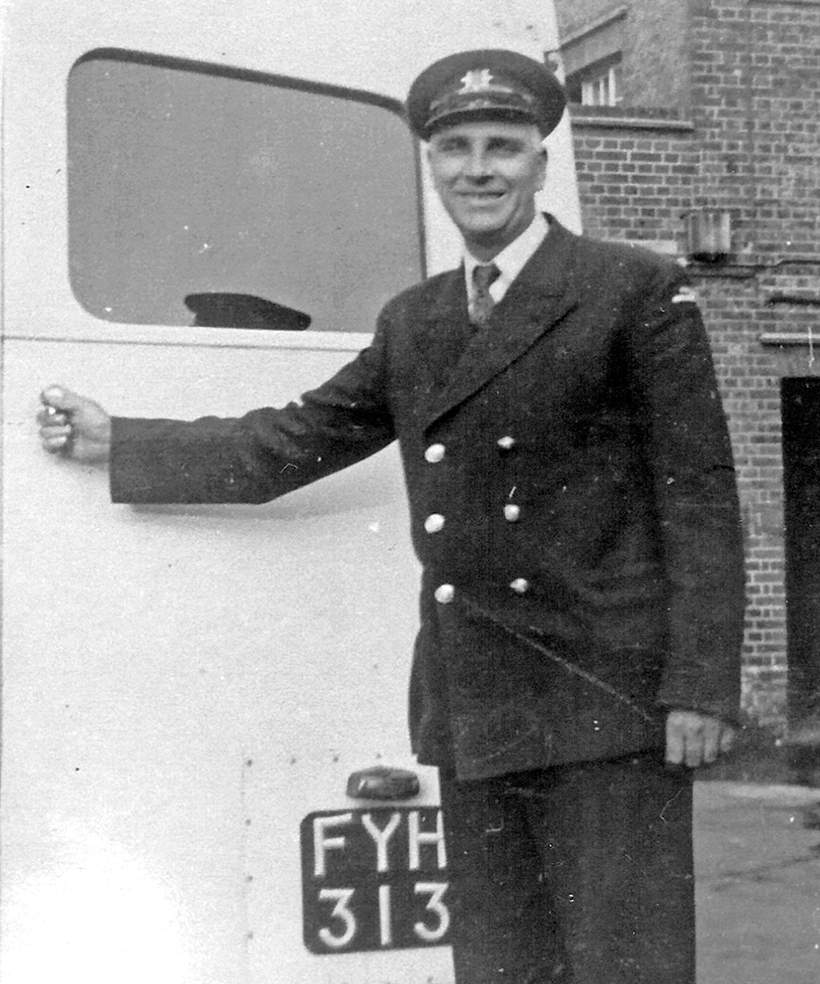 Father Bert, who Mark followed into the ambulance service.

After the NFS took over from the AFS in 1941, with bombing somewhat reduced, a number of AFS vehicles were put into storage, including FYH 51. In October 1947 Middlesex County Council acquired 62 of the Morris Commercial fire engines.  51 were rebodied as ambulances for the new Middlesex Fire & Ambulance Service formed in April 1948.  Another six were rebuilt as ambulance coaches with forward-facing seating, one as a lorry to carry petrol cans, and four were broken for parts.

In 1949 further new CV chassis were purchased and bodied to the same basic design, the fleet going up to about 100.  The conversions were carried out by three firms of coachbuilders, Cunard Commercial Bodybuilding Co. of Wembley, JS Keam of Hackney and Hampshire Car Bodies Ltd. 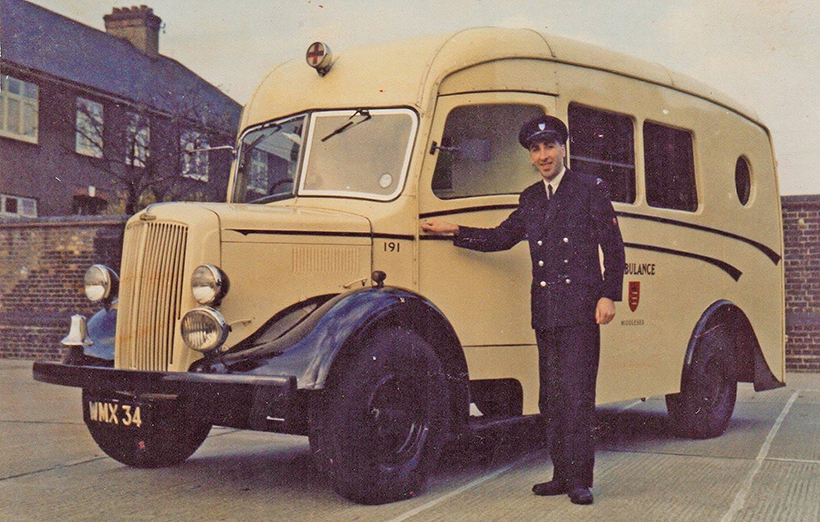 Mark Bailey in 1961 and in the same uniform as he is seen wearing now.

FYH51 was the fleet prototype bodied by Cunard.  It was upgraded with softer suspension and shock absorbers, 16in wheels in place of the original 20in, with low-pressure balloon tyres at the back to make it more suitable for ambulance use.  It entered service in 1948, allocated to West Middlesex Hospital as an Infectious Ambulance, painted in their then-standard grey livery.

However, in around 1949/50, it was involved in a bad road accident taking out much of the nearside.  It was rebuilt again in the Middlesex County Fire & Ambulance Service workshops and upgraded to Sick Removal status, being fitted with holders for blood in case transfusions were needed.  It was repainted cream with black wings, the new Middlesex livery, and based at Hanwell Ambulance Depot. 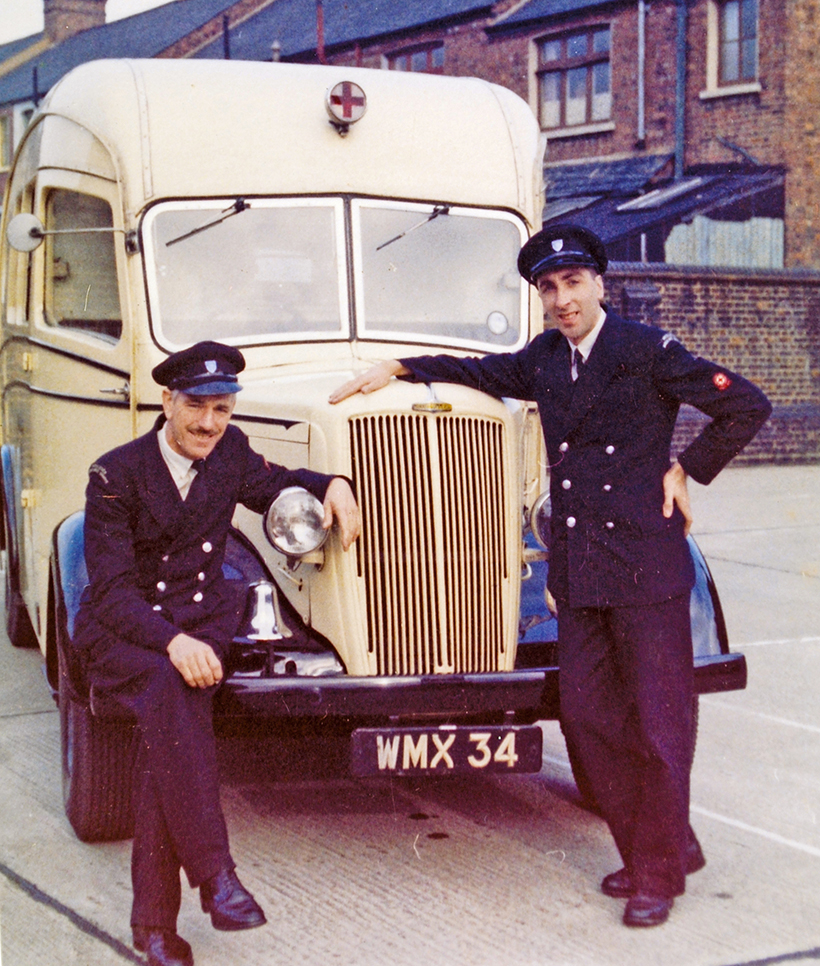 Mark Bailey and colleague Jack Craven (left) in 1961, known as “Bill and Ben the Ambulance Men”.

It continued in service in this form until 1956, when it passed to Middlesex County Civil Defence First Aid & Ambulance section, repainted dull olive-green, and kept at Edmonton Ambulance Depot.

At this moment in the story, I should introduce the ambulance’s current owner, or rather, its saviour, Mark Bailey.  As a young child, Mark suffered from chest problems and several times he was rushed to hospital in wartime utility ambulances. He remembers being struck by how kind the crews were to him. 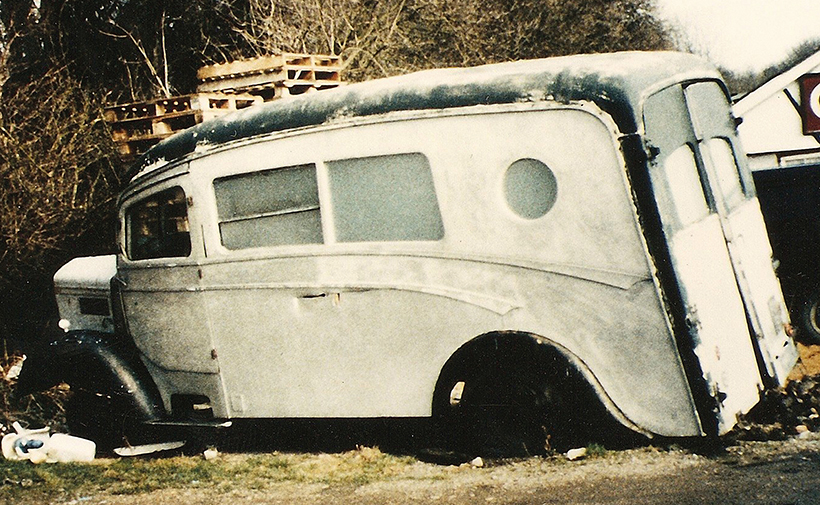 The ambulance in 1980, abandoned where it had broken down outside a transport café in Redbourne, Hertfordshire and subsequently part-pushed into a ditch by a reversing lorry.

Mark’s father Bert (aka Bill) Bailey was in the Ambulance Service based in Tottenham.  Bert died in 1957, but Mark decided to follow in his father’s footsteps and joined the service himself in 1959, being posted to Edmonton Ambulance Depot, where he saw FYH51 for the first time.  “Little did I know then that our paths would cross again many years later,” notes Mark.

By the early 1960s, the pre-war CV ambulances were showing their age.  “Sometimes they broke down.  On one occasion the back door became loose and I had to tie the handle in place with a bandage before proceeding to the hospital with a patient,” Mark recounts. 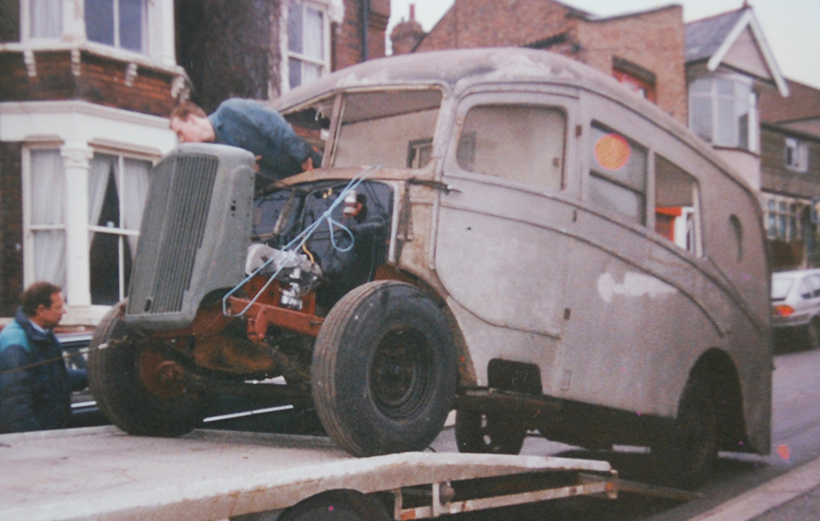 Being moved for restoration.

In 1964, all were withdrawn from service.  FYH51 was sold for £50 to Unilever Research in Welwyn Garden City for use by the local St. John’s Ambulance Brigade, but not repainted.  It saw little use and was sold into preservation in 1970, appearing on the 1971 HCVS London to Brighton run, still in its shabby green Civil Defence livery.

It then passed to a scrap metal dealer who gutted the interior and added a tow hook, using both the ambulance and a trailer to transport scrap metal.  He began repainting it, but never finished.  One day in 1976 he pulled into a transport café in Redbourn in Hertfordshire and the engine died.  He couldn’t get it going again, so abandoned it there, having stripped out anything useful. 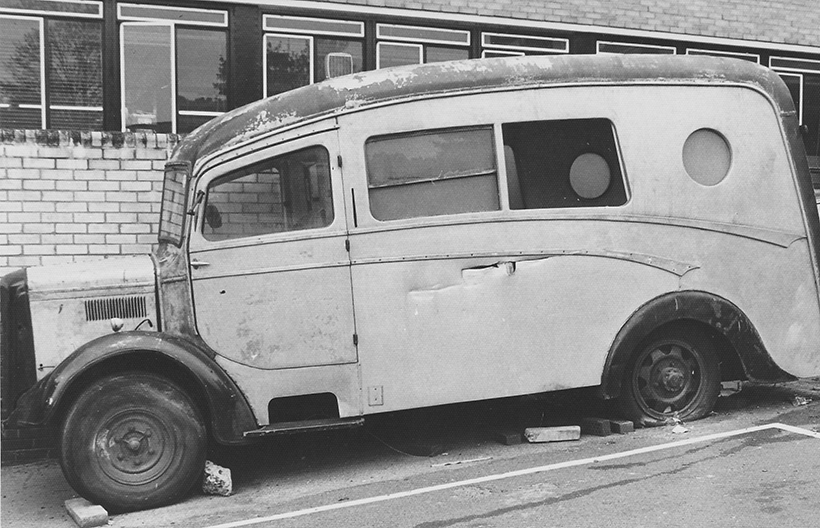 After it was moved to Hertford, with a 30-year restoration coming up.

Eight years later, the publican of the John O’Gaunt pub in Hertford was passing by and saw the poor old ambulance, sitting half in a ditch after a lorry had backed into it.  He rescued it and moved it to his pub car park.

In 1983, Mark and his wife were driving through Hertford and saw the ambulance outside the pub.  “I immediately recognised it and spoke to the publican.  He said he was hoping to restore it.  I even started getting a few bits for it to help with the restoration,” Mark tells me.  “Whilst it had been at the transport café, I understand a few vehicle preservationists had looked at it, but decided it was too far gone to restore.  They didn’t have my personal historical interest, though.” 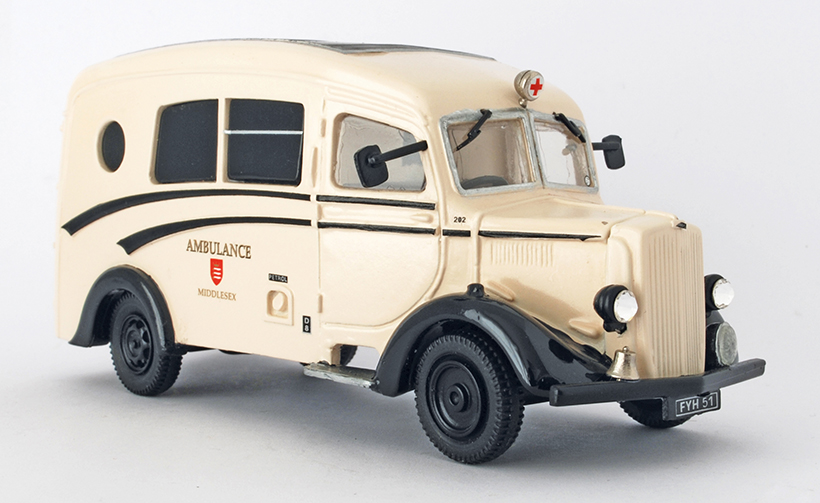 The ambulance was still sitting outside, however, and suffered some vandalism, with a window smashed, mirrors stolen etc.  After a while, the publican decided it was too much for him and so offered it to Mark.

It was towed to the yard of J.W. Blake & Son, an old family coachbuilding firm, who had agreed to store it.  “I told Mr Blake Senior I’d give him the contract to paint it when it was restored.  Blake was heard saying, ‘he’ll never finish it!’” notes Mark.

In the meantime, the original registration was lost as it hadn’t been entered onto the DVLA computer.  Fortunately, after some effort, Mark was finally able to reclaim it. 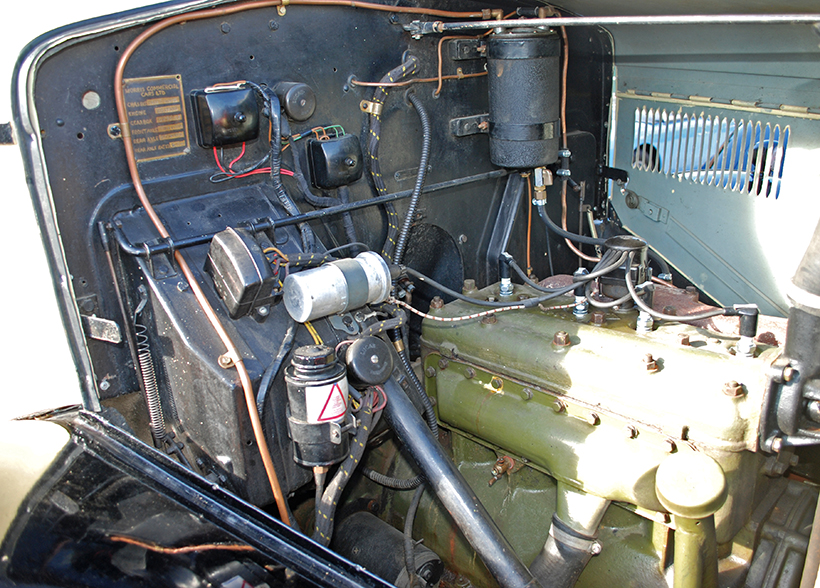 Then a garage owner from Walthamstow came into Blakes and saw the ambulance, becoming very enthusiastic about it.  He offered to let Mark park it in his garage and if his workers had nothing much to do in between jobs, they would carry out bits of restoration.  The first thing they tackled was the engine.  The cylinder head bolts had been replaced with brass ones, which had resulted in the head distorting.

Whilst it was there, in 1990 a professional carpenter came into the garage, who had just finished restoring his Triumph Roadster.  “It’ll only take a month to restore the woodwork,” he said.  So, the ambulance was on the move again, to Willingale near Epping Forest. 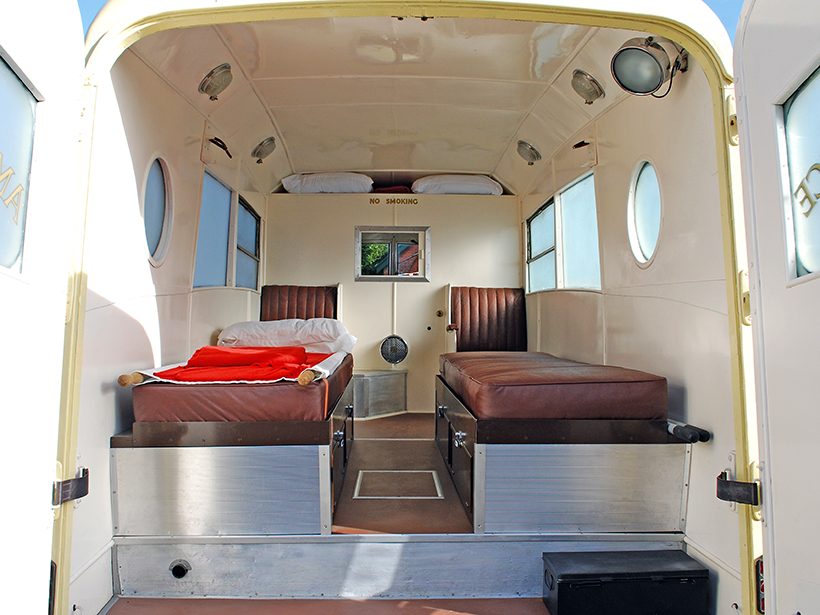 Restored interior is something of a contrast to today’s highly-equipped ambulances; back then the ambulance crew’s job was transport rather than treatment!

However, it was much worse than it looked.  “The interior panelling was virtually holding the body together,” Mark laments.  “The month on the woodwork turned into several years!  The back doors were beyond redemption.  The steps had rotted away.  The 6ft long rear corner posts had rotted down to 4ft and 3ft respectively.”

Most of the woodwork was replaced with new ash.  The metalwork along the bottom of the body was buckled and twisted where it had been driven over rough ground by the scrapyard owner.  Corrosion meant much new steel had to be welded in, but Mark was keen to keep as much of the original material as possible. Fortunately, Mark had learnt bodywork skills whilst working for Epping Forest District Museum, after leaving the ambulance service. 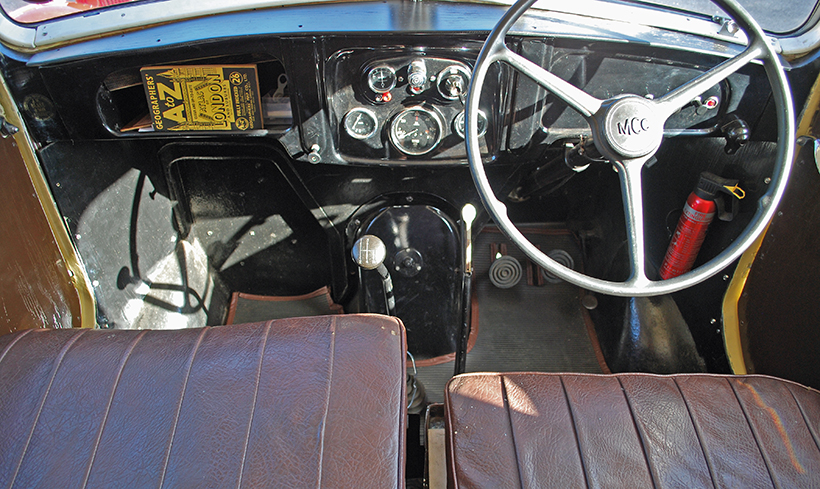 Then the carpenter became too busy to continue, so the ambulance moved again to a farmer’s barn.  After a while, he wanted the barn back, so Mark contacted the London Ambulance Service, who suggested he spoke to Whitewebbs Museum of Transport in Enfield, who were very interested in the ambulance and agreed to house it.

By 2014, some 30 years after it was last there, true to his word, Mark returned the ambulance to J.W. Blakes for that repaint.  “Blake Senior had sadly died, but his son John Blake was fantastic!  He repainted her with coachpaint, and she is now as she was in service in 1955,” Mark enthuses.

The rear facing seats are the originals, but Mark had to recreate most of the interior fittings, using old photographs and his own memory of the ambulance in service.  It took 25 years to track down a proper set of door hinges, and 30 to find the heater.  The lino flooring was a lucky find, some very old stock that matched the original. 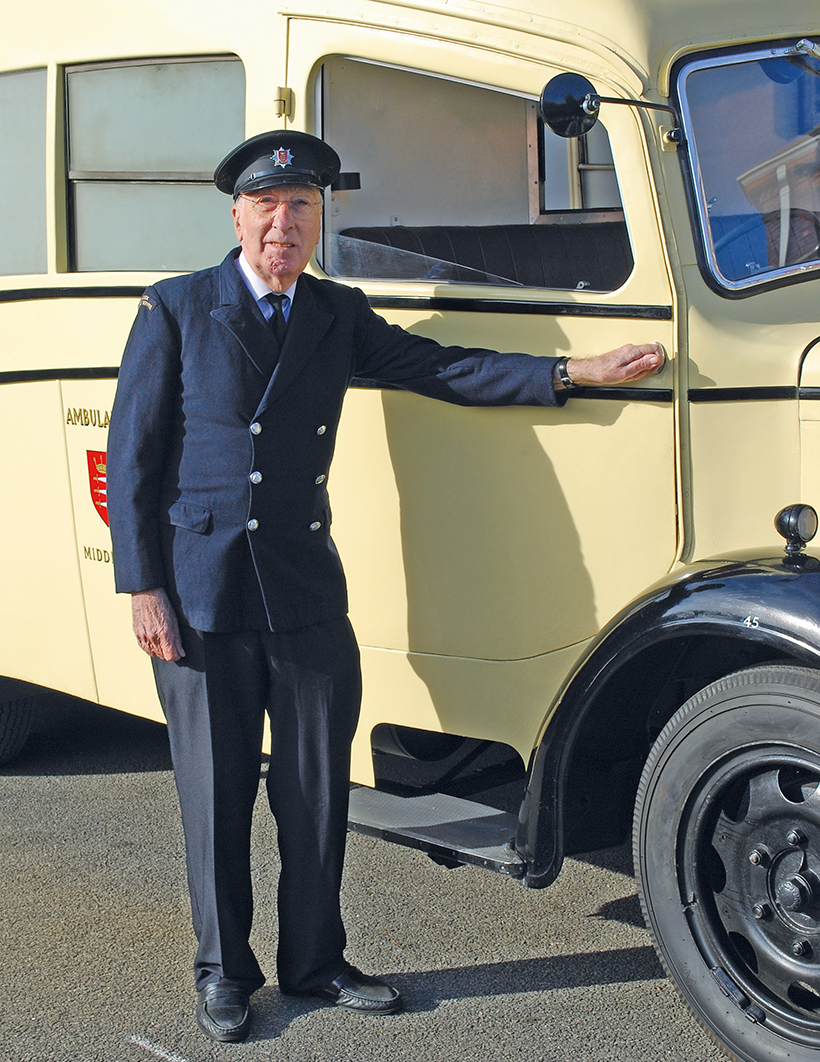 A 1/48 scale resin model of FYH 51 has been made by Paul Slade of Fire Brigade Models, available in each of the three real liveries that it wore in real life.  These are available at £120 + P&P via their website, https://firebrigademodels.webs.com/.

In 2015, with the bulk of the restoration competed, Wendy was finally put on display at Whitewebbs Museum, back in Middlesex.  Mark estimates that the restoration, including storage, has cost around £20,000 since 1983.

Mark did keep one of his old uniforms when he left the ambulance service.  “Fortunately, it still fits, even if it is a bit tighter now!” laughs Mark. 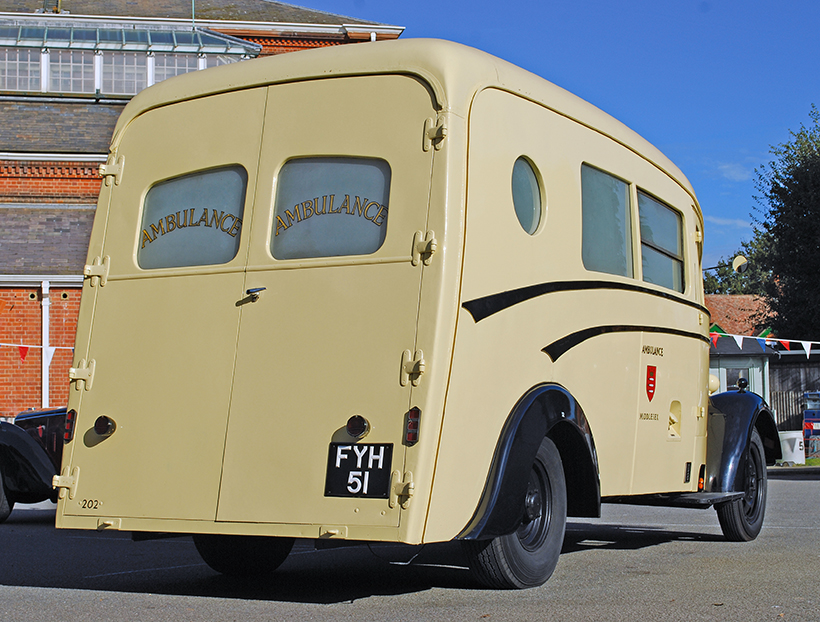 Stylish and sweeping bodywork was by Cunard, and replaced the fire engine bodywork that the Morris was built with.

Mark has named the ambulance Wendy, as Mark’s late wife said that she had married a boy who never wanted to grow up.  “So, if I’m Peter Pan, then the ambulance must be Wendy, with a Tinkerbell on her front bumper!”

This article comes from the latest issue of Classic & Vintage Commercials magazine, and you can get a money-saving subscription simply by clicking HERE 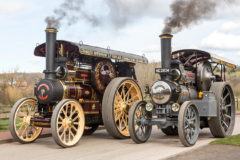 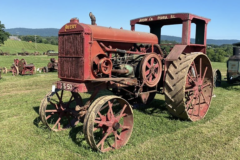