Mike Neale tells the story of a much-travelled, 1955 Austin A30 van with a slightly surprising background. 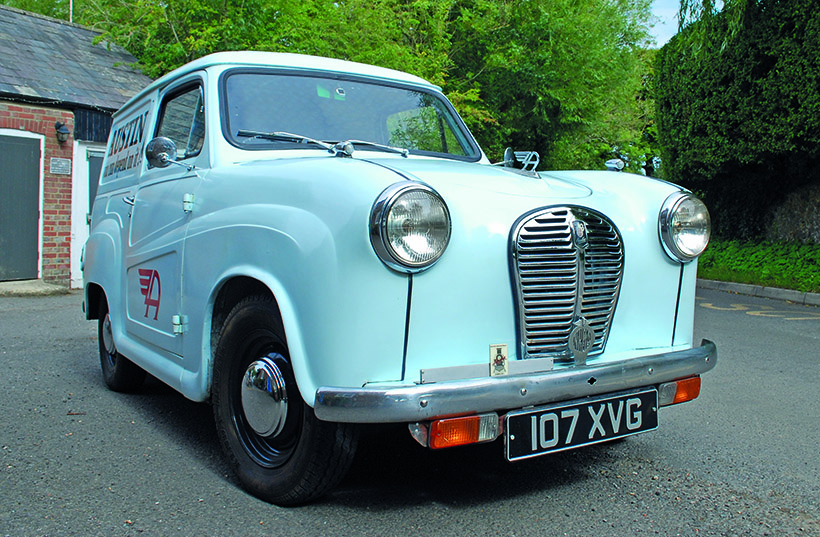 1955 Austin A30 van: A chrome – as opposed to painted – radiator grille distinguishes the A30 from the later and more plentiful A35.

Under development since 1948, Austin launched its new baby, the A30 Seven, as it was initially known, in October 1951 at the Earls Court Motor Show, arguably stealing the show. You couldn’t rush out and buy one, however, as prototypes were still being tested. Production began in May 1952, initially just as a four-door saloon (model code AS3). Even then, as with most new cars, few were available on the home market, with the majority being exported.

In October 1953, a two-door A30 was announced (model A2S4); a little cheaper than the four-door (which became AS4). Both featured a redesigned fascia and other modifications.

Buyers had to wait until August 1954 for the 5cwt van version (AV4), with the van-derived Countryman (Austin-speak for Estate) introduced the following month (AP4). A genuine Countryman can be identified by the lack of a roof-mounted ventilator, fitted to all vans. 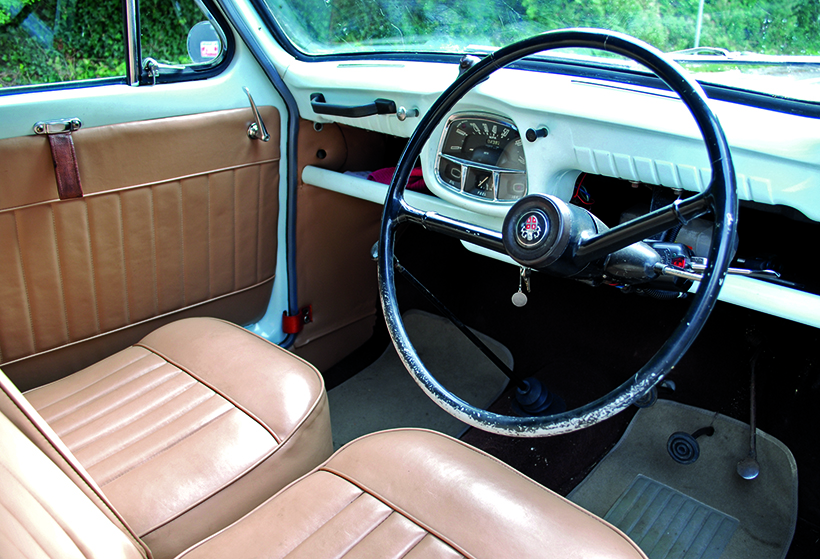 The seats have been re-trimmed. Centre dash was common in low-cost vehicles, as it simplified production of LHD and RHD versions.

From the front, the van and Countryman looked the same as the saloon, although the flare of the front wheelarches was in fact slightly different, as they were fitted with 5.90x13in tyres as opposed to the saloon’s 5.20x13in. The side doors and side panels had recessed pressings, as did the single rear door.

Semaphore trafficators were fitted in the pillar just behind the side doors while, on each flank at the rear, there was a single, circular rear light with a circular reflector above. The Flying-A badge was in fact the bonnet catch, while an ‘Austin of England’ badge was fitted to the rear door. 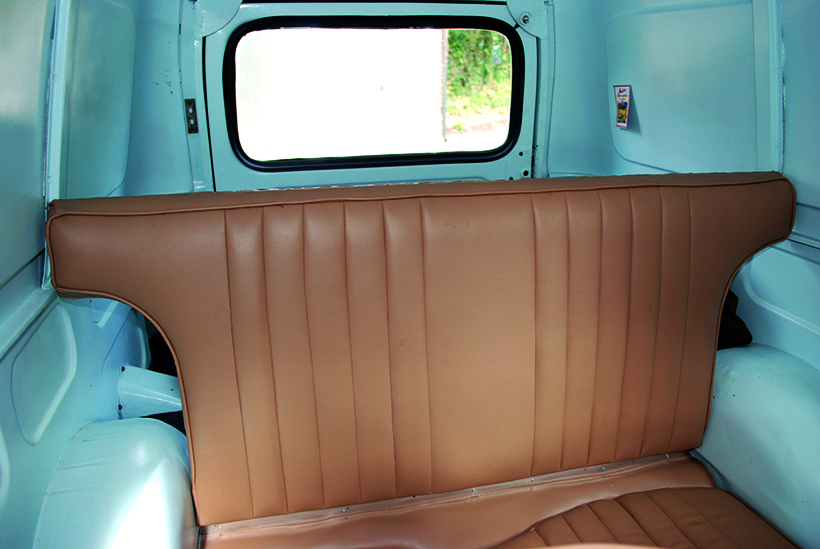 A passenger seat was not fitted as standard, except on export models although, thankfully, a passenger side windscreen wiper was.

Rear springs were heavier duty than on the saloons, with 11 leaves instead of eight, while the final drive ratio was lower at 5.375:1 compared to 5.125:1 on the saloon (5.143:1 on the earliest saloons). A four-speed gearbox was fitted, with synchromesh on the three upper gears. The floor-mounted gear lever was direct-acting, and did attract some criticism. 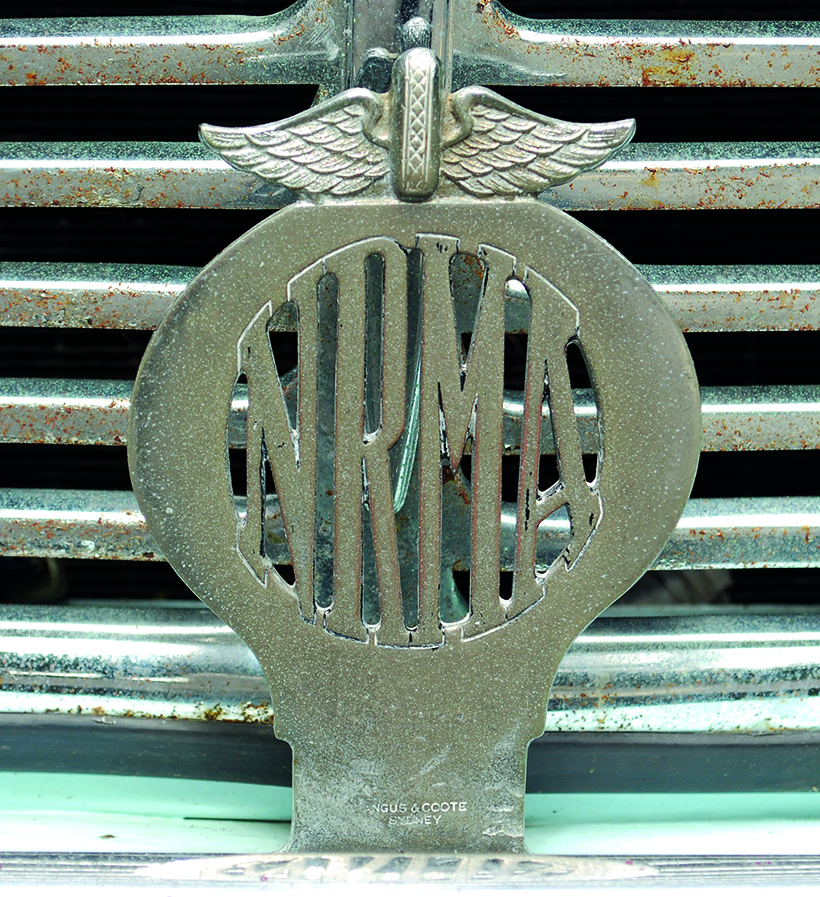 This 1955 Austin A30 van has been owned by Graham Hamblin of West Sussex for around two years. He had been looking for one for some time, as a companion to his Morris 1000 Van. He finally found this one at a local dealer.

This early van is Briggs-bodied, identified by the plaque under the bonnet. Unfortunately, the ownership history of the van had been lost. Graham notes: “I was told it was originally a UK-supplied vehicle, and that a previous owner emigrated to Australia with it, staying for around 25 years, until both returned to the UK.”

A badge on the front bumper for the bi-annual ‘Austins over Australia’ national rally in Ipswich (Queensland, not Suffolk) indicates that the van was repatriated after April 2017.

Vans came with a roof air-vent, but the rarer, Countryman version didn’t.

However, I also noticed a lubrication plaque fitted under the bonnet by Larke Hoskins & Co of Sydney, which had been Austin dealers since before the war. This suggested that that company might have sold it new, which didn’t quite fit with the story Graham had been told.

Time to put my detective hat on. I discovered a photo online showing the van wearing a New South Wales Historic Vehicle registration, 47280H. My investigations led me, via the Australian Austin A30 Club, to the Austin Motor Vehicle Club of NSW (AMVCNSW), where I managed to track down previous owners of the van, Brian and Margaret Heaton.

Brian was able to fill in a lot of the missing detail. “I purchased it from a Mr Maurice Dunne in January 2000, who had acquired it from the nephew of the original owner, who had employed it as a delivery van for a Bakery in Tamworth, country NSW. It had been last registered in 1966, so had been on the road for just 11 years,” he explained. 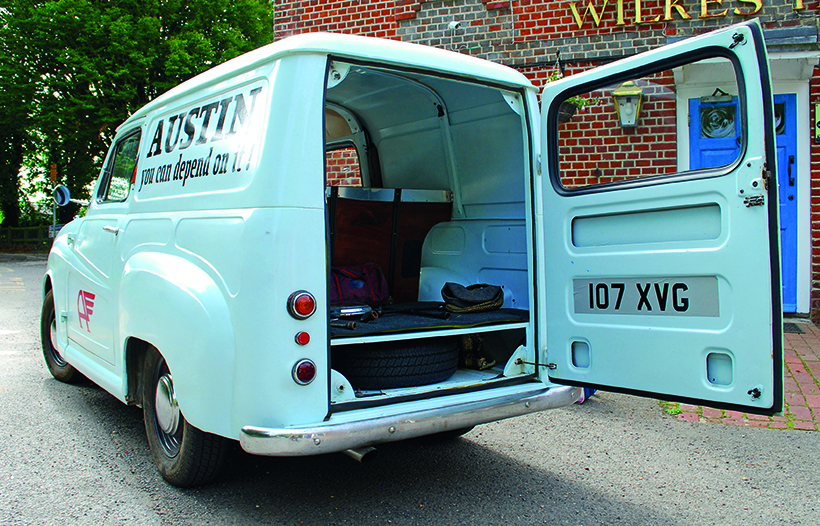 The side-opening rear door was clearly designed for markets that drive on the left.

Brian was kind enough to send me some photos of the van as it was when he bought it, and during its restoration. We tend to think of Australian vehicles as being relatively rust free, due to the climate and lack of salt on the roads, but that isn’t always the case, and this A30 had corroded quite a lot, particularly around the lower edges. In fact, Brian and Margaret named it ‘Rustey’.

“Most A30s which came here were in CKD form and, on assembly, went through the Rotodip process for rustproofing, whereas those coming out from the UK fully built didn’t get the same treatment,” Brian added. “Also, being a country vehicle operating on dirt roads didn’t add to its longevity!” 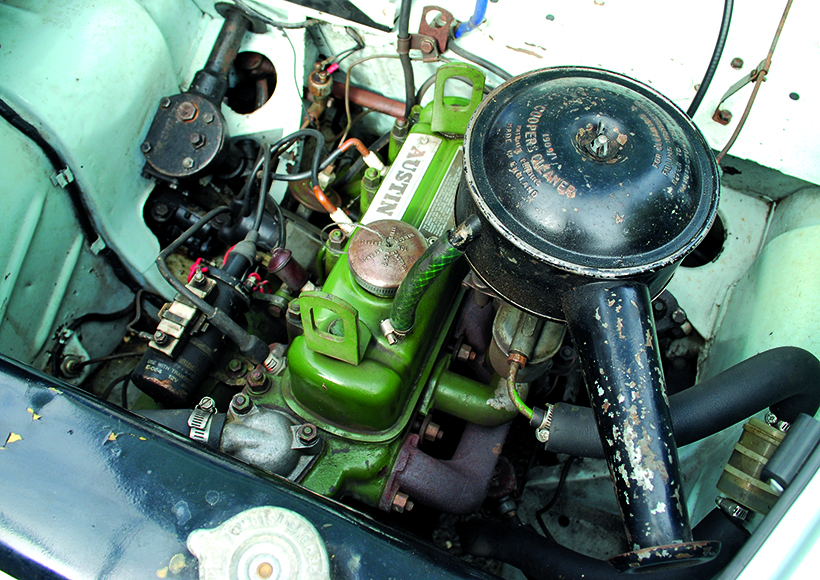 The Austin A30 was the first vehicle to use – in 803cc form – the BMC A Series engine. This engine remained in production, albeit much-modified by the end, for over 30 years! The empty space next to the battery would sometimes be taken up by an (optional) heater on UK vehicles.

Brian fully restored the vehicle himself, with the exception of the door cards and seats, including its Countryman-type rear seat, which were done by Brian Jubb, another member of AMVCNSW. New outer sills were purchased from Old Era Services of Gloucester NSW, with all remaining fabrication of inner sills, floor pans, lower guards and associated welding being completed by Brian, along with painting, rewiring and all mechanical reconditioning. The 803cc engine is the van’s original. The A30 hit the road in 2011, some 45 years after it had last been driven.

“Over the following seven years we covered over 4,000 miles attending many club events and Austins Over Australia in Forbes and Ipswich QLD,” recalls Brian. “Due to now being 74, and Sydney traffic being as it is, I sold the vehicle in April 2018 to a Builder/Developer from near Brighton, in the UK, who used to spend your cold winters in our glorious sunshine out here.” This explains how the van came to be in Sussex. 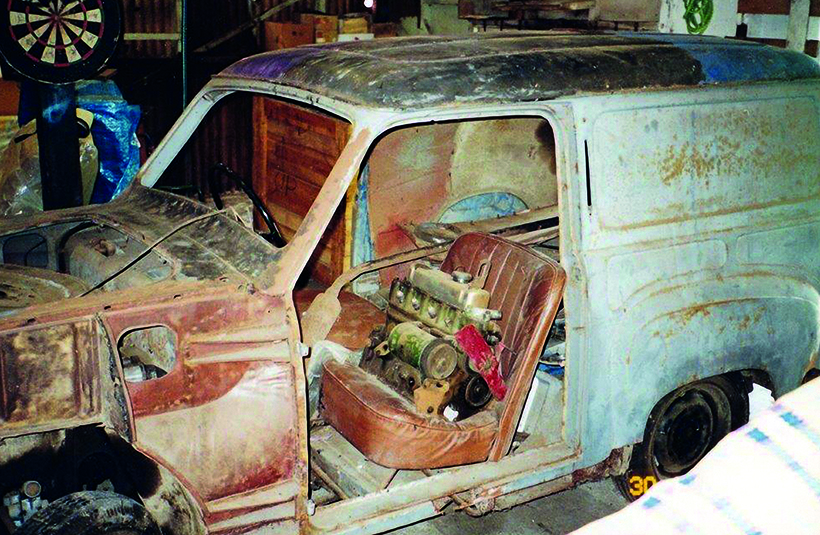 As found; the vehicle had already been part-stripped by someone else, which is rarely helpful to whoever actually completes the rebuild.

When Graham bought the van, it was largely as you see it now, with the red flying-A and ‘Austin – you can depend on it!’ lettering already applied. The utilitarian, rectangular front sidelights and indicators had also been fitted to supplement the trafficators, along with extra, circular flashing indicators at the rear.

There were a few jobs that needed doing, though, and Graham renewed the wheel bearings and brake shoes. “I also broke down in it, and couldn’t work out why for a while,” recalls Graham. “It turned out to be the fuel pipe that wasn’t fitted tightly enough to the carburettor, so it was pulling in too much air and not enough petrol. It was about the last thing I thought of! 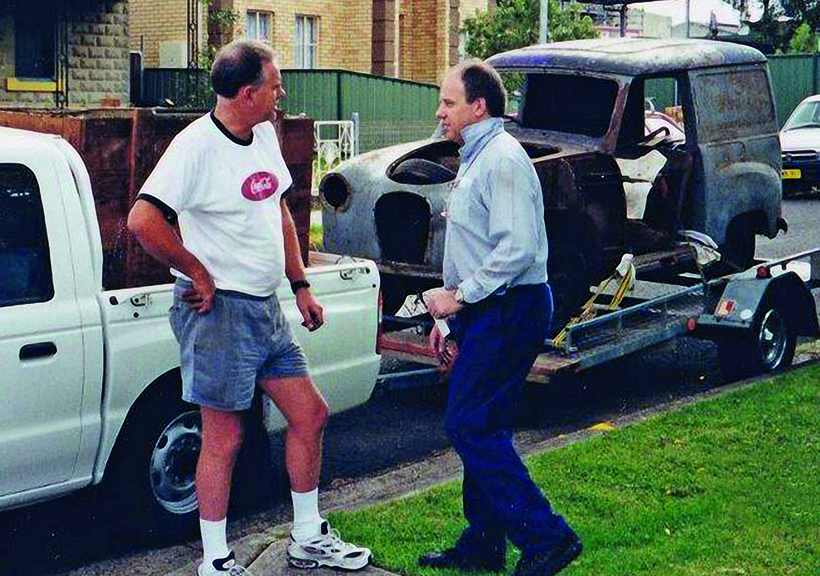 Picking ‘Rustey’ up for restoration. The car had last been on the road in 1966.

“It could do with a new steering box really, as there’s a bit too much play in it now. Apart from that, though, it drives very nicely,” Graham notes. “It doesn’t leak any oil and runs sweetly, unlike my Minor van on which the bottom end rattles and a fair bit of oil leaks out.” The odometer currently reads 04382, which is the mileage since the rebuild.

He also plans to repaint the roof, but leave the rest of the van untouched. Some matching cellulose paint came with the van when he bought it, so it should be a straightforward job. 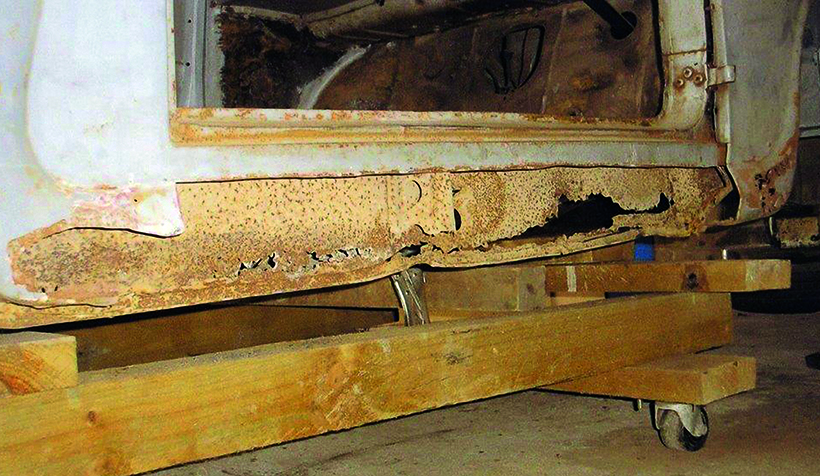 “Parts supply is good for these. Of course, the mechanical bits are readily obtainable, but even body parts are easy enough to get. Not that I’ve needed any yet,” explains Graham. “I’m in the Austin A30 & A35 Owners’ Club, and it’s easy enough to find parts online.

“It’s comfortable at about 45mph. The brakes work well – it still has the original drums. I like it to be a usable van, not over-restored or blinged-up,” Graham told me. “It’s tidy enough under the bonnet, but I don’t see the point in polishing everything under there. I like to use it, rather than show it. In fact, when I go to car shows I usually just park in the public car park so I can come and go when I please.” It’s always worth checking out the general car park at a car show in my experience… 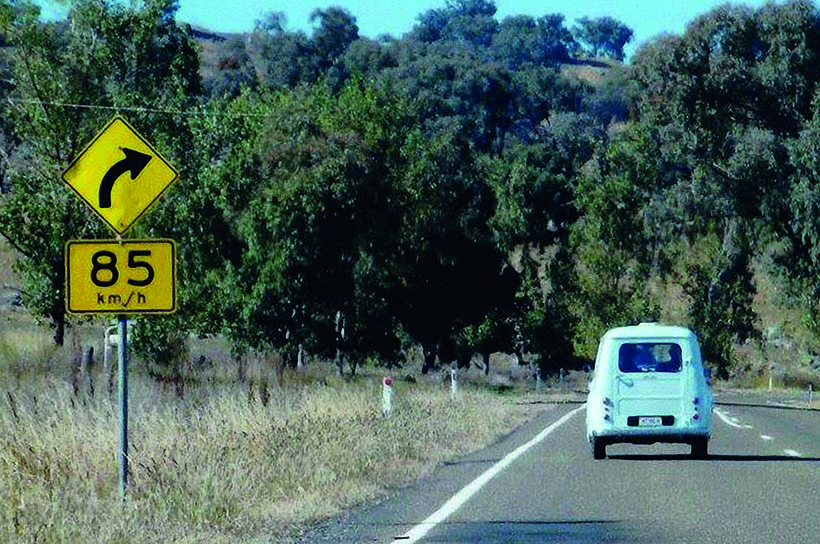 Back on the road – in Australia!

Although there are quite a few A35 Vans surviving, the A30 Van is now pretty rare, especially one with a Briggs body. Graham has always preferred BMC cars. His first car was a just pre-BMC-era 1951 Morris Minor MM. “The A30 Van is the only one I’m never going to sell, though!”

Thanks to Graham Hamblin and Brian Heaton for their assistance with this article. For further reading, I recommend Barney Sharratt’s excellent book, Post-war Baby Austins, published in 1988 by Osprey Publishing. It’s out of print now, but copies do crop up from time to time. 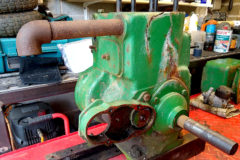 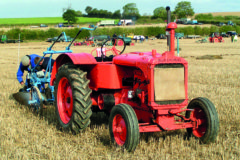