Peter Love visits Chris Wells to admire the results of the sympathetic restoration of his 1973 Ford 4000 classic tractor. 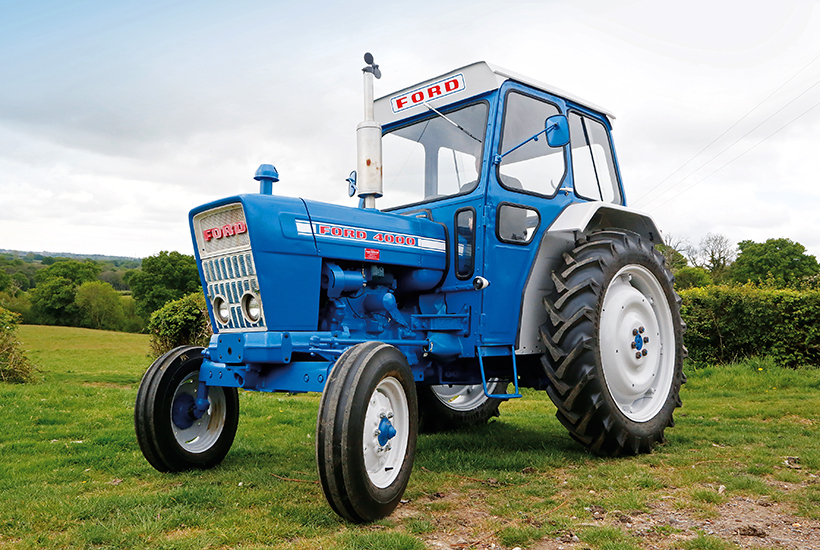 It was a pleasure to receive a call from Chris Wells of Rushlake Green, East Sussex, and to hear that his 1973 Ford 4000 was finished and ready for the road! This is the latest of several restorations that he has undertaken and I was keen to see the results of his efforts.

Chris’ father was the publican at the White Horse Inn, Bodle Street Green, but he purchased Durrants Farm, Cowbeech, and was due to take up residence early in 1963 but, because of the horrendous snow and freezing conditions, the move was delayed by some weeks. 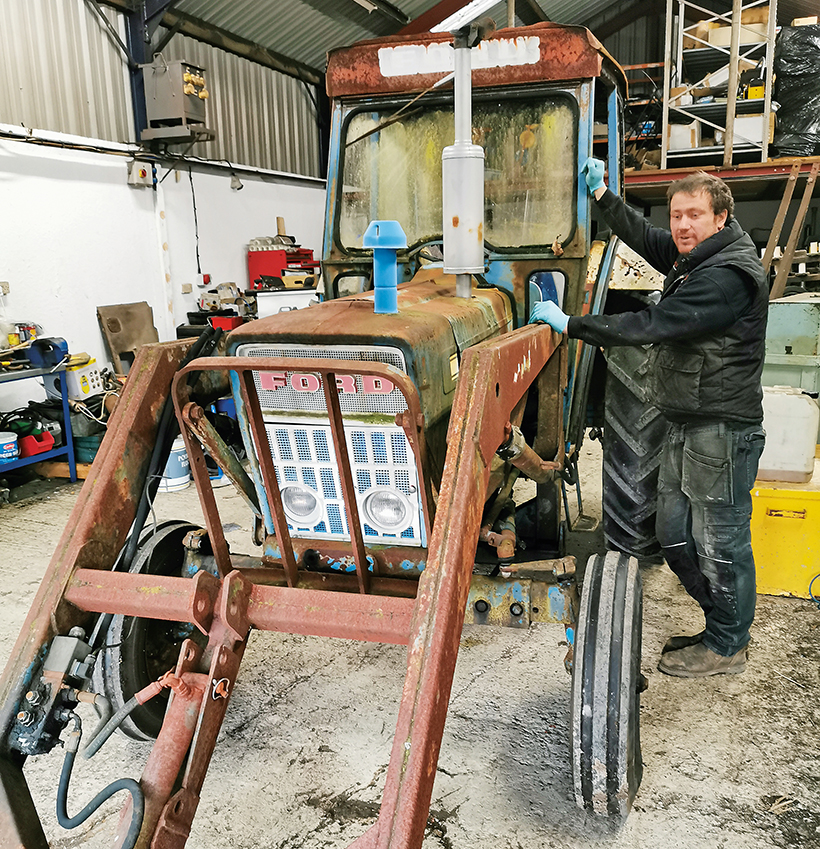 This is the tractor as purchased, with the loader ready for removal.

The farm would eventually become Chris’ concern after his father suffered a heart attack when Chris was just 14 years old. He took control, under the guidance of his parents, and would go on to rent the farm from them until their passing. There was a lot of growing up to do and life was not all plan sailing for Chris, but it all ended happily.

In those early days the farm featured a Guernsey dairy herd, but after the restrictions were placed on full fat Channel Island milk he moved over to a Friesian herd. Chris explained that he needed more land than he had to make them a real success, so he moved onto other types of farming and engineering to make a living. 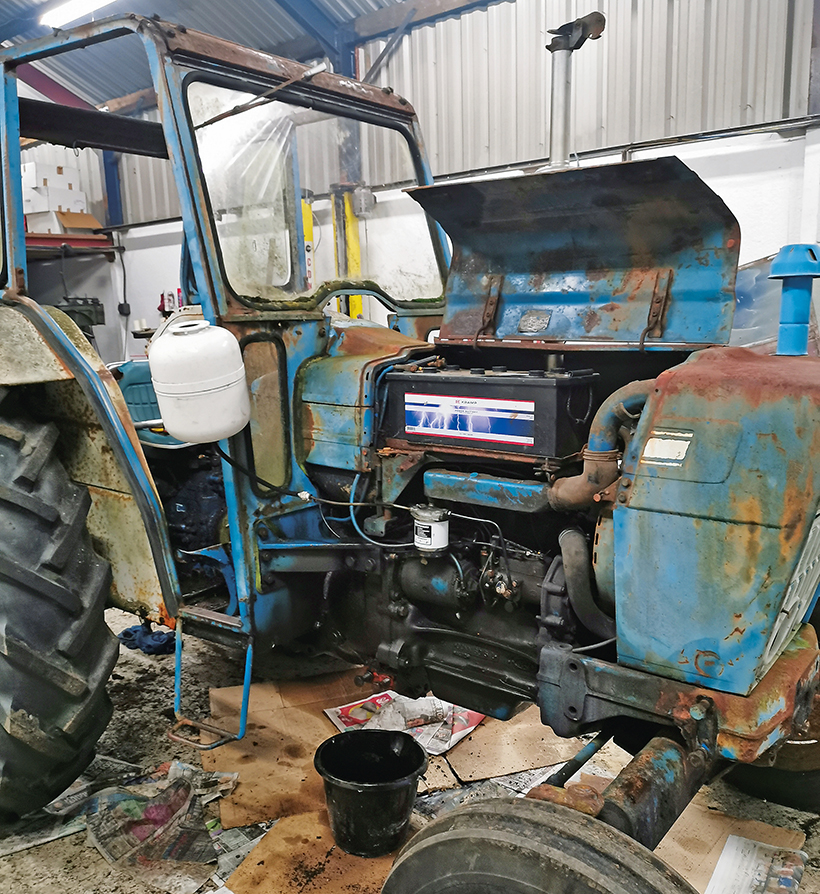 The tractor ran for five minutes and stopped!

He went on to create AGMAC with Rob Leaves, which they operated together for a good number of years before an amicable parting of ways. This led to Chris taking on the tyre side of the former business and creating RLG Tyres, which has been going for around 30 years now.

Chris runs the business alongside his wife, Caroline, with the help of a great team. They are very much the people to go to in the area for tyres to suit vintage, classic and modern tractors, as well as rubber to suit four-wheel drive vehicles. RLG Tyres also offers a mobile fitting service in the area too. 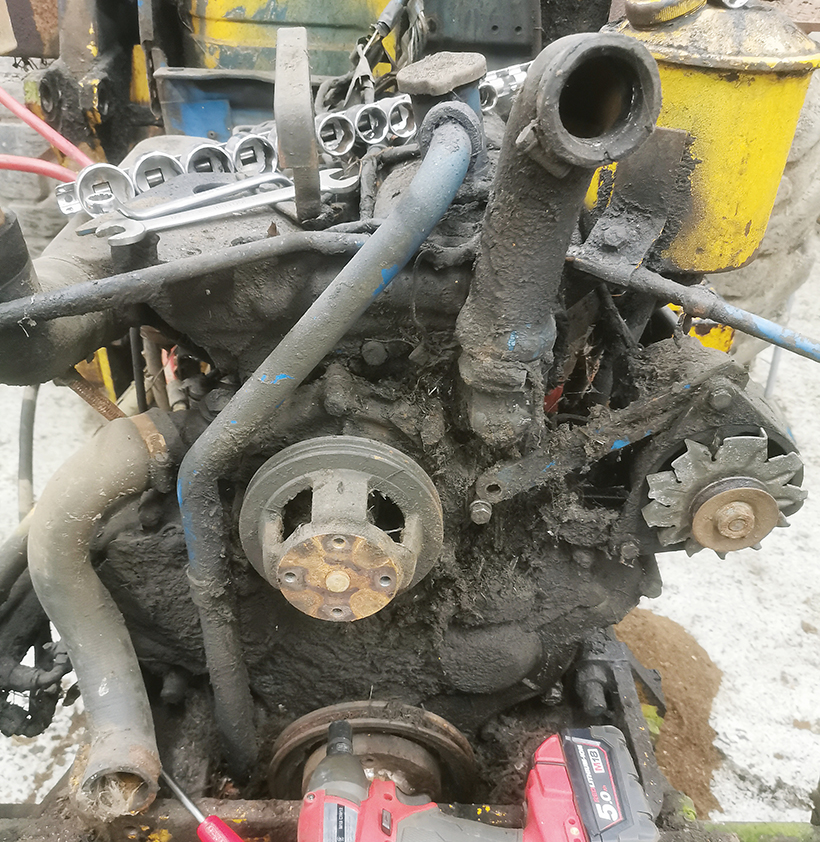 The engine was coated in grease and grime after decades of neglect.

Back to the farm and over years two Massey Ferguson 35s were used, as well as Ford 4000 and 5000 models and the ubiquitous Fordson E1A Major – which was used for timber work. Chris still has this tractor, but predominantly uses a very clean International 955XL. 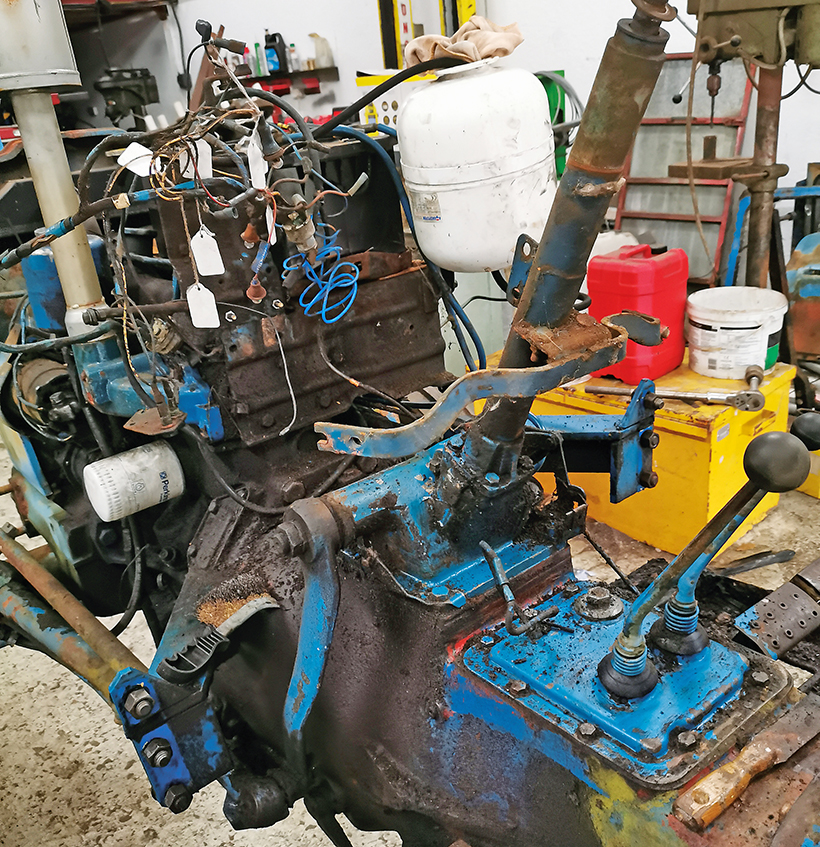 After taking the cab off it was time to pull the tractor out of the workshop and power wash it.

In a field
As for the subject of this feature, Chris was offered it a few years ago now. It was fitted with a loader and power steering by Shaws of Cowbeech and had been sold at Hugh Parks’ disposal sale before ending up at Moieties Farm, Cowbeech.

The tractor had been standing in a field for some time as, unfortunately, it had a fuel problem and would start for five minutes and suddenly stop. Chris did not know this until he was informed by others! A deal was eventually done and it came back to Durrants Farm. 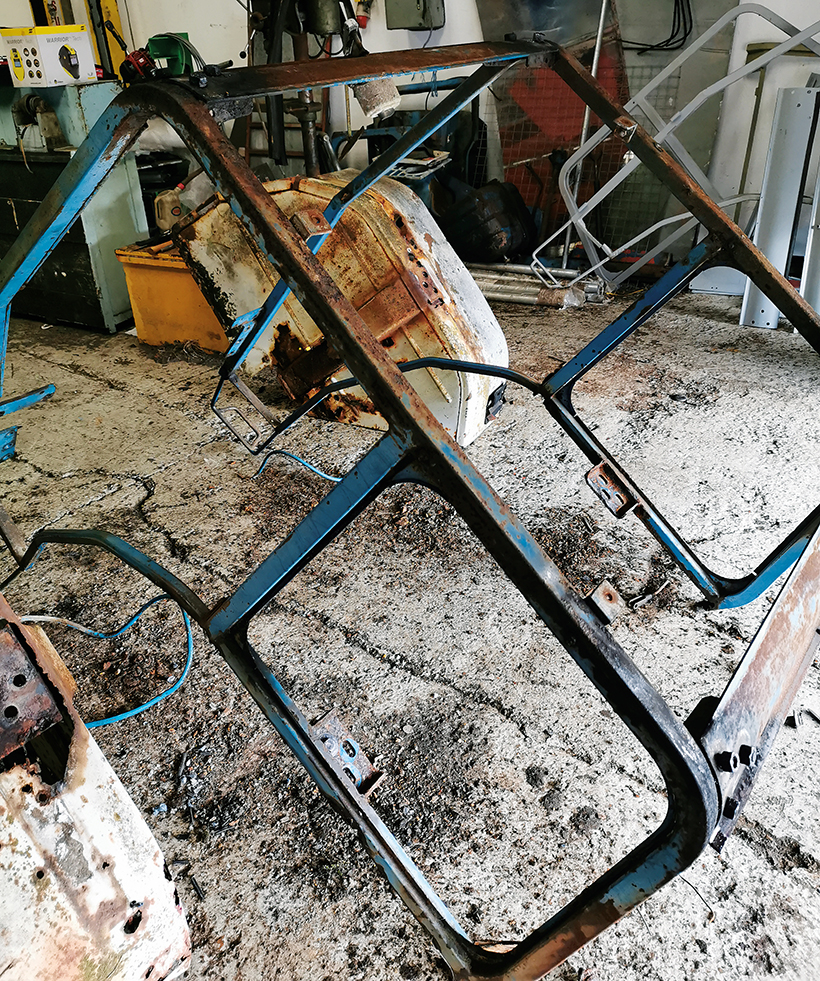 The cab frame was good, but needed sanding down and cleaning up. The mudguards were replaced by better examples.

Thanks to Rob Leaves, the fuel problem was diagnosed as the fuel tank filter, which had been replaced but was becoming blocked by particles in the tank after five minutes of running. With this removed the tractor ran superbly, but in the restoration process the tank was power washed a number of times to cure the problem for good.

Chris decided that this was not going to be a half measures job and the 4000 was fully stripped. He didn’t want the loader and power steering and so these were sold off for further use. 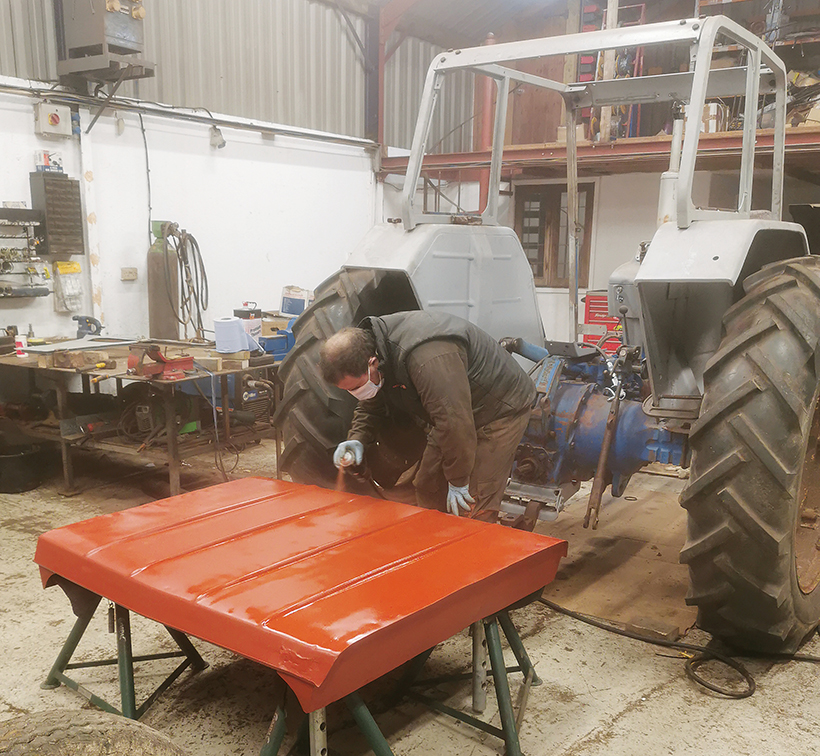 A genuine replacement genuine cab roof was acquired and prepared for top coats of paint.

After power washing a number of times, the tractor was stripped where necessary. Luckily, the engine was basically good, but all the oil seals were replaced and the cooling system was treated to a new water pump and radiator overhaul.

The clutch was replaced, along with the steering joints and all of the oils, and the brakes were overhauled. A new wiring loom was required and this basically left the cosmetic side of the project to sort out – which wasn’t without its complexities. 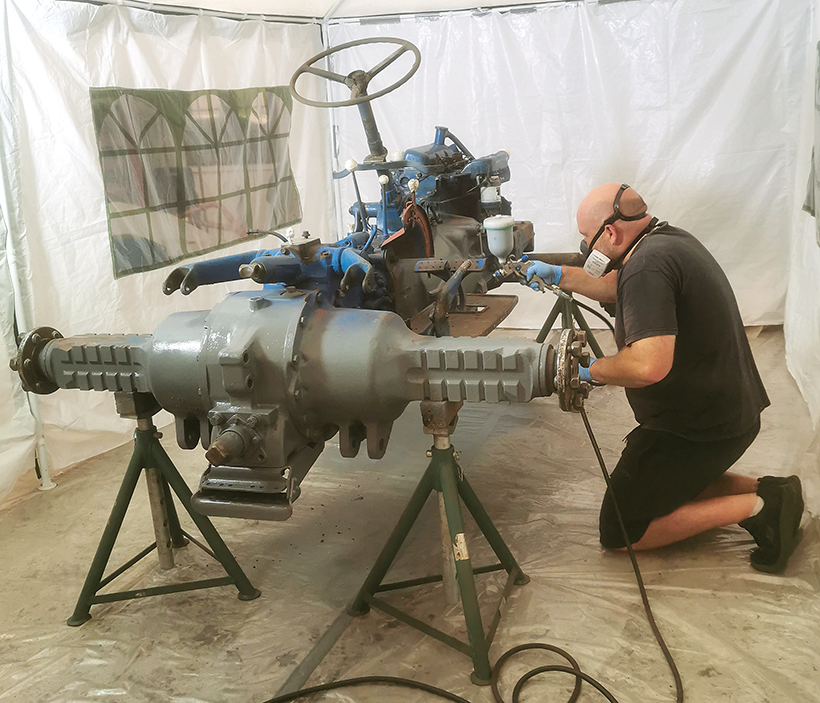 On goes the high-build primer.

The off-side cab door was missing, but Chris was able to obtain a second-hand example, along with glass for the sides and rear of the cab. The original windscreen was retained and the nearside door was straightened and reused.

Sadly, the roof was past its best, but a deal was done with Tottingworth Farms at Broadoak and a genuine 4000 cab roof came Chris’ way. Various other cab parts were obtained from Tractor Cab Specialists in Northern Ireland, which fitted perfectly. Two mudguards were also obtained to complete the list of parts needed to be replaced. 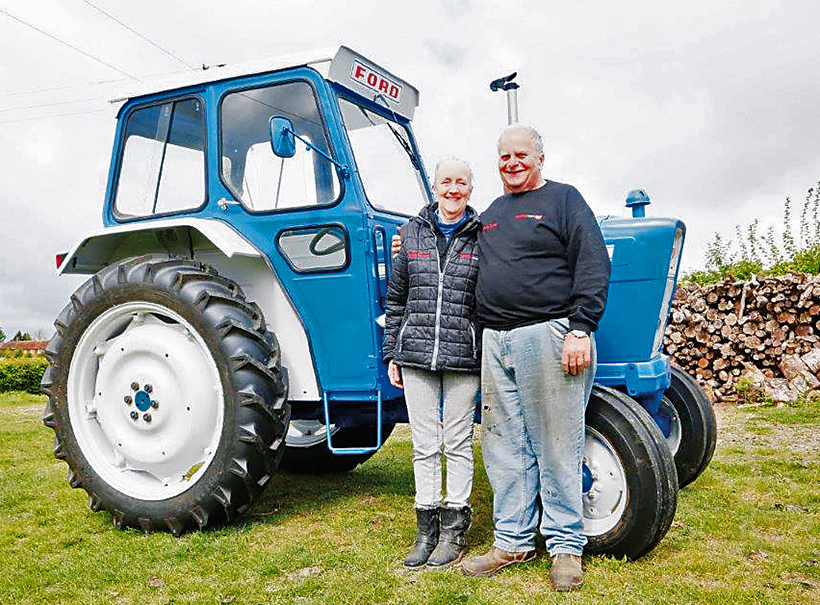 Caroline and Chris Wells with the tractor.

Original machine
Chris is a strong believer in original parts and, where possible, he will use them. Experience has led him to discover that some aftermarket parts do not fit very well. He would like to thank Robin Curd of Haynes, the local New Holland dealer, for all of his help – particularly when it came to sourcing quality, correct parts.

As with all these things, it takes time doing the job, but the result would be worth the wait. Naturally, the wheels got the works before a new set of tyres went on and it was in this area that Chris was originally planning to fit two pairs of CEAT tyres, but he ended up putting on a pair of Alliance 12.4/11-36 on the rear. 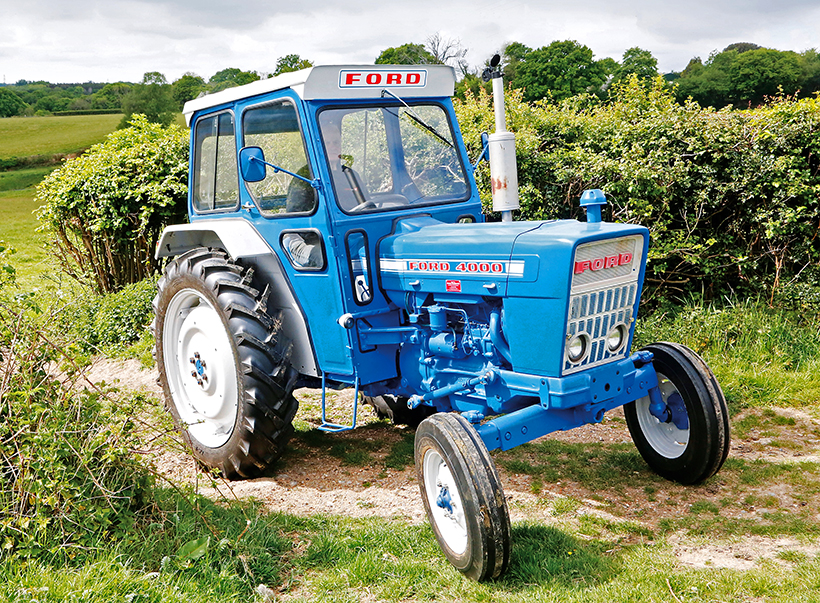 Durrants Farm has seen a number of Ford 1000 Series tractors over the last 60 years, but this is the latest to grace the land.

The tractor would usually have been fitted with Goodyear tyres at Basildon, but Chris considered Indian brand CEAT as it is one that he sells a lot of. CEAT’s European subsidiary is based in the Netherlands and in recent years it is a brand name that has become more popular in agriculture.

When it comes to the age-old debate of whether to shot blast or not, Chris is certainly not an advocate of this process. He appreciates the finish achieved by blasting, but finds that blast material always gets where it shouldn’t and causes problems. As a result. Chris opted to sand the tractor down himself in readiness for applying paint. 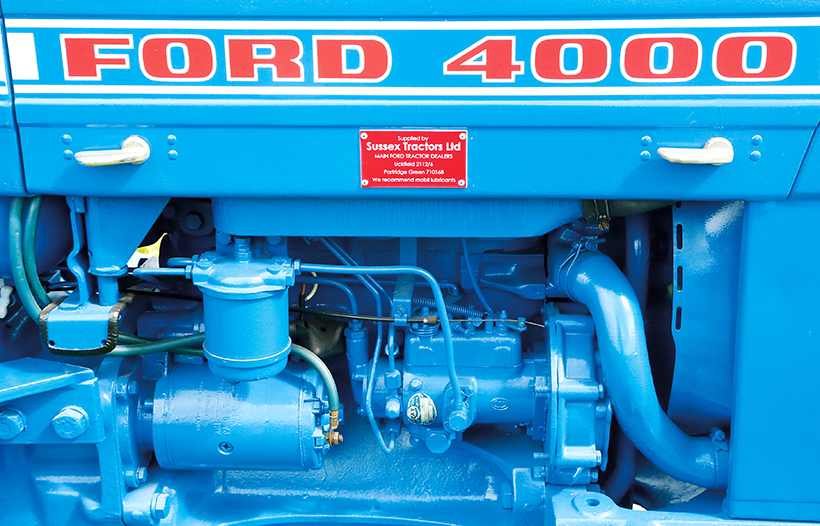 Sussex Tractors was once the go-to company for Ford tractors in this part of the UK, but it was taken over by Haynes Agricultural Ltd. – a New Holland dealer with six branches across, Berkshire, Hampshire, Kent and Sussex.

Other preparation included filling and sanding the bonnet panels, which are mostly original, before employee Lewis Tripp got to work with the spray gun. He used synthetic paint supplied by Trade Paints Ltd. of Hailsham and I have to say that the results are very good. 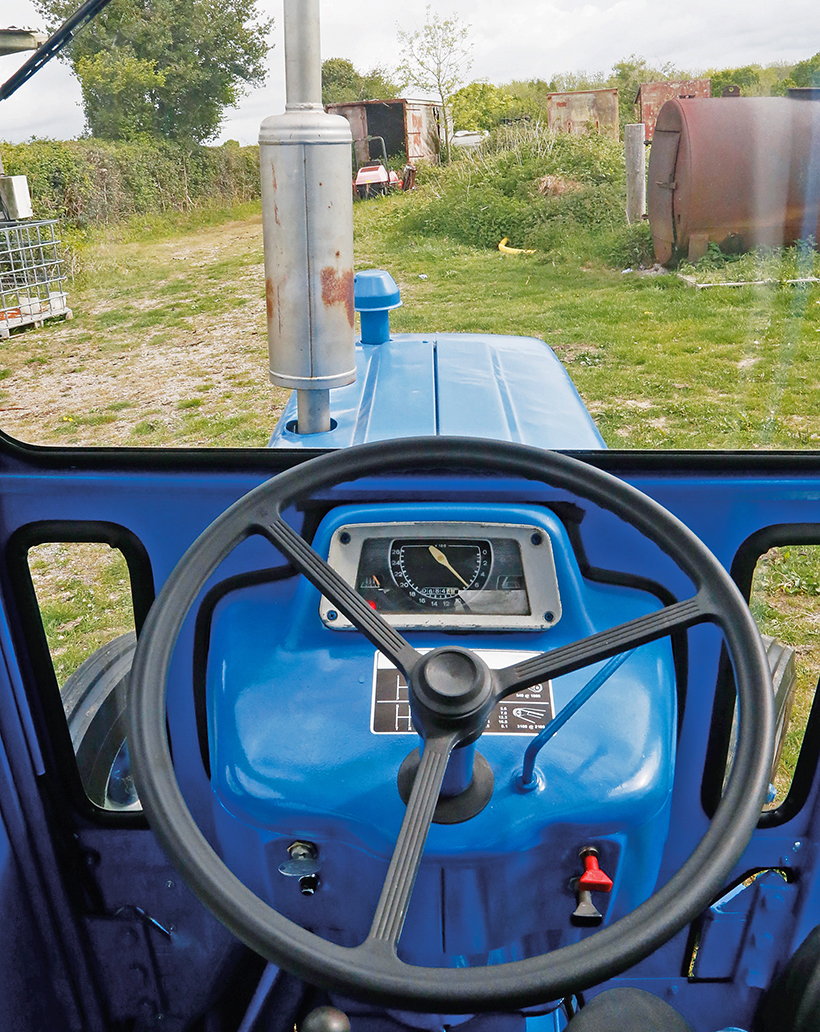 Chris has retained original parts where possible and the tractor feels all the better for it.

On Sunday 15 May the tractor was finally ready to take part in the first Cowbeech charity road run, when 36 tractors and a number of military vehicles came together to take part in a 13-mile road run around the area. The sky darkened, but Chris and the others got round without getting wet, just in time for a burger back at Cowbeech. 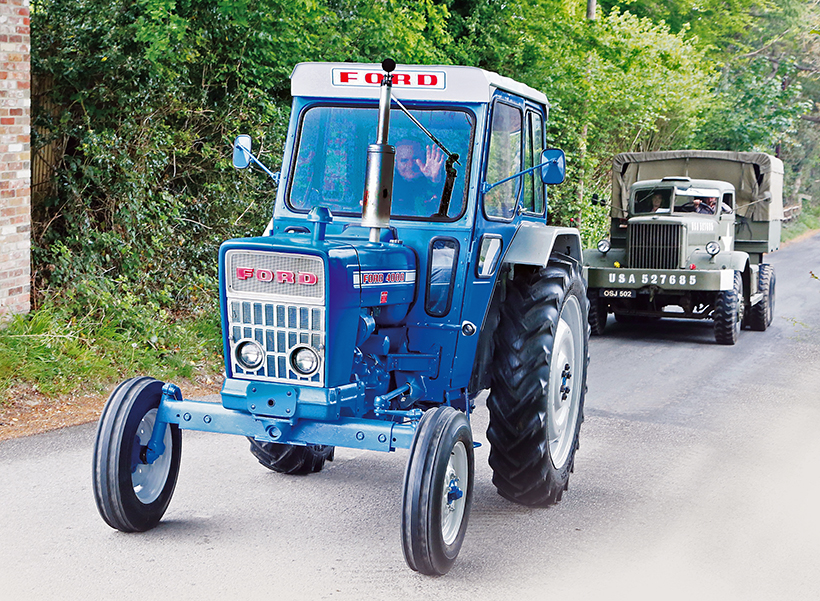 He says that the Ford 4000 went well, but he will adjust the tappets shortly and the tractor will be ready to rally.

This feature comes from the latest issue of Tractor & Machinery, and you can get a money-saving subscription to this magazine simply by clicking HERE 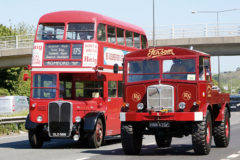 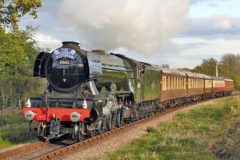