Now and then you come across a genuinely superb, restored tractor, as the late Alan Barnes did with Tom Mew’s fabulous Ford 3000. 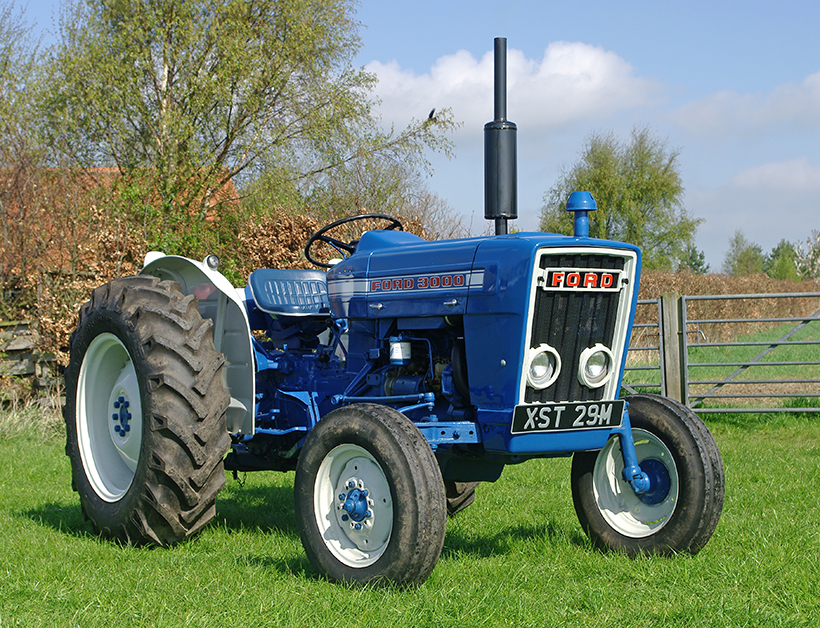 A fabulous Ford 3000!: It’s hard to believe it now, but this Ford 3000 was recovered as a derelict wreck from Glenelg, on the West Coast of Scotland.

One of Tom Mew’s fine tractors that I particularly enjoyed seeing was his fabulous Ford 3000. This tractor is by no means a recent example of Tom’s skilled handywork, as the project was completed in 2008 but, with the benefit of it being kept under cover, the Ford is still in immaculate condition.

This Ford is just one of over 30 tractors which Tom has restored over the years, and which are kept in sheds on his farm near Burnmouth, in the Scottish Borders. Perched high on the hills overlooking the North Sea, it’s just as well that his tractors are kept under cover as the winds during the frequent winter gales can “take your skin off”, and probably strip the paint from a tractor!

Weather gamble
Not wishing to risk either skin or paintwork, I’ve always done my best to ensure that my visits to Tom are arranged when there’s at least the possibility of some fine weather, although forecasts don’t seem to carry much weight around those parts; predicted fine days can sometimes turn rather nasty. 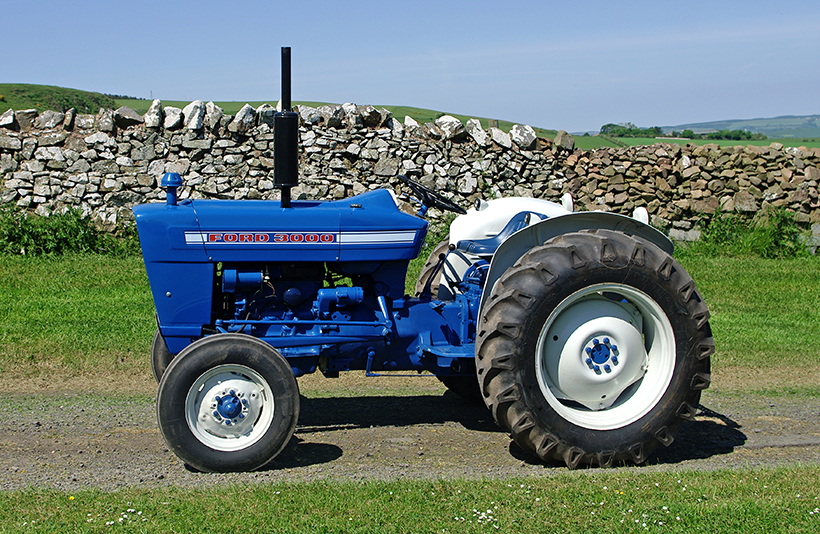 Tom Mew’s Ford 3000 is a stunning example of tractor restoration at its very best.

The farm has several, large sheds which have been purpose-built to provide space for Tom’s tractor collection, a well-equipped workshop and the room to house a fascinating collection of other machinery that Tom’s gathered together over the years. These include some interesting examples of stationary engines made by Lister, Wolseley and Petter, plus a number of boat and marine engines, and a superb Lister winch which was used to erect electricity pylons. In fact, Tom is no stranger to pylons, as he spent 40 years with Balfour Beatty as a civil engineer, constructing power lines all over the world. Even the tractor sheds are built from pylon parts!

Tom’s father was a marine engineer with Thornycroft, in Southampton, and he followed in his father’s footsteps to train as an engineer. He has combined a life of engineering and farming, as his late wife was a farmer’s daughter, and Tom still lives on the family farm at Burnmouth. Tom retired in 1992, but his enthusiasm for engineering remains and, while he may not be putting up pylons and power lines across the world any more, he spends his time returning classic tractors to their original condition. In fact, if the truth be known, some of the tractors are even better than when they were brand new.

Plenty of work
But, as well as restoring his own tractors, he’s also worked on countless others for friends, neighbours and many others who want their machines to benefit from Tom’s undoubted expertise. This work can range from fairly straightforward mechanical repairs, to full-blown, ground-up restorations. Whatever the project, though, his primary aim is always to retain as much of the original tractor as he possibly can. Parts are only ever replaced when the originals are too far gone to be re-used. 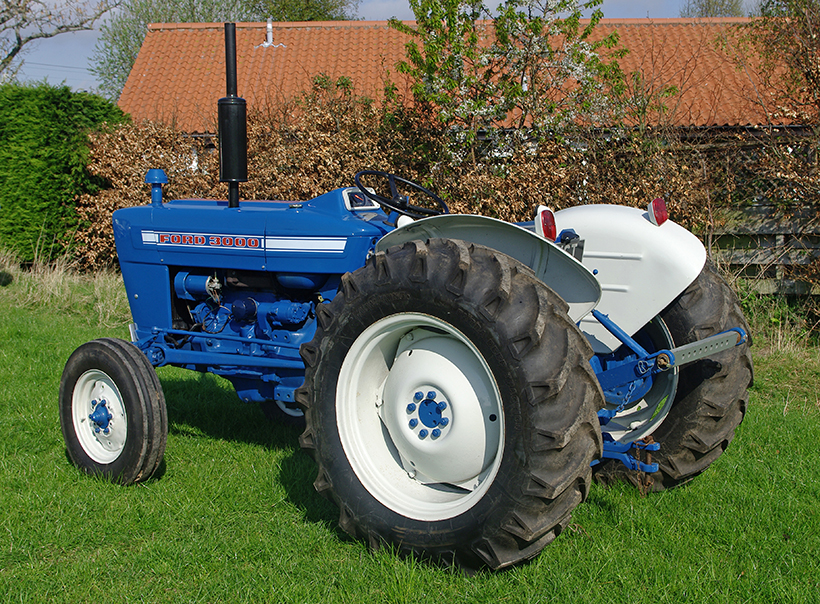 Although a great deal of the original tractor has been saved, some parts – including the wings – had to be replaced. New tyres were fitted, too.

When I visited the farm, his workload included the full restoration of a grey Fergie for a customer, the similarly detailed renovation of a David Brown 25D which had been acquired for his own collection, and helping a friend – Robert Chisholm – complete the work on his Nuffield 342.

Robert runs his own bodyshop business at Eyemouth, which is a few miles up the coast to the north and, as well as having tractors of his own, he also assists Tom with any spray painting which may be needed.  As Tom told me: “When it comes to the paintwork, I’ll do all of the preparation work, the priming and undercoating and brush-paint the chassis and smaller parts. The larger metalwork, such as the bonnet panels, wings and front cowls, are usually painted by Rob, who can certainly produce a top-class finish.”

Tom’s collection is quite an eclectic mix of models, including Nuffield, David Brown, Fordson, Caterpillar, Ford and Ferguson machines all tucked away in the sheds. His particular favourite is a 1942 Fordson Standard N, which is a wartime model with narrow wings and finished in the dark green livery of that particular period. He’s always on the lookout for tractors to add to the collection, but he refuses to pay the ‘silly prices’ which are often asked for some machines. He is still searching for what he terms his ‘Holy Grail’; a Field Marshall, which he hopes to find one day. 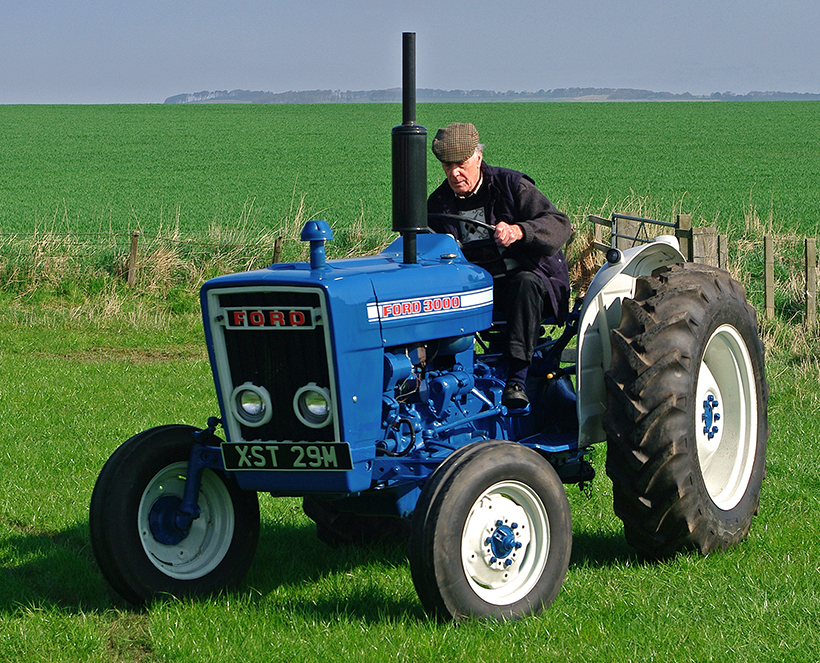 Tom Mew on the Ford 3000 at the Chain Bridge Honey Farm, shortly after the restoration was completed.

Sourcing spare parts
As far as spare parts are concerned, Tom considers that it’s a lot easier to find parts today than it was several years ago, when tracking down a particular part could take some time. “While I leave my grandson to surf the net and find some parts that I need, I rely on the ‘Tractor Grapevine’, and firms such as Southern Counties which have good stocks. Occasionally, friends just leave parts – sometimes even complete engines – in my yard, just in case they prove to be useful and, in most cases, they do and so get added to the parts in my storage racks.”

I asked Tom how he approached a new restoration project? “Usually, it’ll involve a complete strip down of each machine,” he explained, “but, once a tractor has been recovered and brought back to the farm, the first job is carry out an assessment of its condition, and make a list of the replacement parts that are going to be needed. Next the whole tractor gets thoroughly pressure-washed out in the yard, to remove all the muck and dirt. This gives me a decent starting point, then it’s just a case of taking everything apart, assessing the condition and then sorting everything into those parts which can be cleaned, repaired and re-used, and those which are past all hope, and have to be replaced. More often than not, I’ll have suitable spares in stock but, if I don’t, then the search for suitable replacements will begin.”

High standards
The standard of Tom’s restoration work is extremely high, and there are several tractors in the collection which are arguably in better condition than they were when sitting, brand new, in the salesman’s showroom. The Ford 3000 is an M-registered tractor which Tom acquired in August 2007. As he explained: “A friend of mine came across the tractor during a visit to the west coast of Scotland. Its owner had worked a small croft near the small village of Glenelg, and he’d bought the tractor new from the main Ford dealer in Inverness.

“The story goes that the machine was used more on the road, travelling to and from the local shop, than it was working in the small fields of the croft. When the owner later died, the tractor was just left outside in one of the fields, where it remained for about eight years. Unused and unloved, it stood in that exposed spot, facing the worst of the Scottish weather and blasted by the salty sea air.

“Fortunately, the Ford remained largely intact; often parts get removed from ‘abandoned’ tractors, but this one was still in one piece and, although looking rather the worse for wear, we considered that it did have restoration potential. Arrangements were made to recover the tractor, and it was brought back to the farm on a trailer. 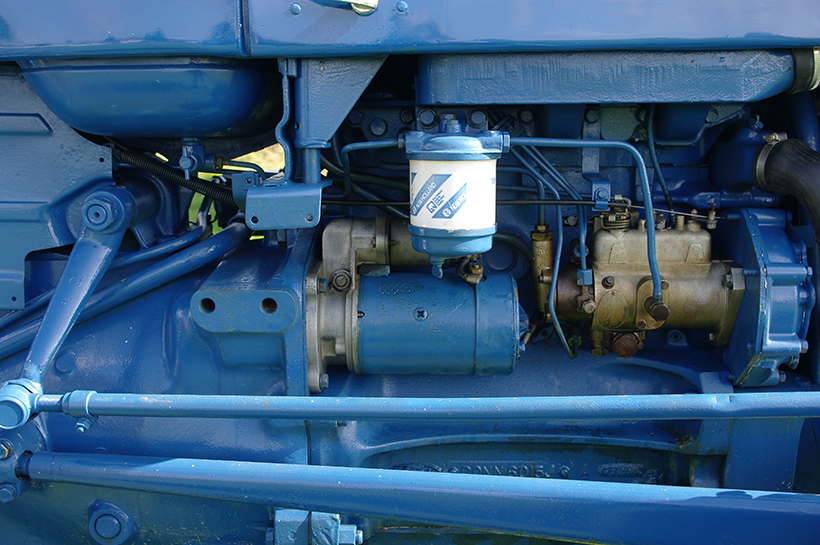 Having been exposed to salt air during its working days, the engine was completely stripped down, cleaned and rebuilt. Most of the parts were re-used, although new pistons and liners were required.

“A power-wash removed the surface dirt but, with tractor having been exposed to salty air for so many years, it was obvious that it would have to be completely stripped down and thoroughly cleaned to remove all traces of salt. The engine was the original and looked to be sound and, despite the years of neglect and once everything had been stripped down and cleaned, I only had to replace the pistons and fit new liners.”

Damaged panels
“The bonnet had obviously received a few blows during its working days and was badly dented, but this damage was repaired without too much difficulty. However, the nose cone and wings had become badly rusted and, as there really was no sound metal to work with, replacement parts had to be found and fitted. I also needed to fit a new seat.”

One of Tom’s sheds houses the sandblasting equipment, which is powered by its own generator; the fine-grain sand quickly takes the parts back to bare metal. Once the old paint is removed, each item can be closely inspected to ensure that there’s no hidden damage. The equipment has to be used with some care, as Tom explained: “Great care must be taken when using sandblasting gear to clean thin sheet metal – particularly aluminium – which is very easily damaged. Over-zealous use of the sandblaster could result in a lacework panel, rather than a clean sheet of metal!”

Some problems were found with the hydraulics, as rainwater had got in but, once everything was cleaned, new O-rings had been fitted and the pump replaced, everything worked very well. Once the work on the engine had been completed, the unit ran very sweetly. Tom also replaced all the electrics, fitting a new wiring loom, replacing the dynamo and fitting new headlights. 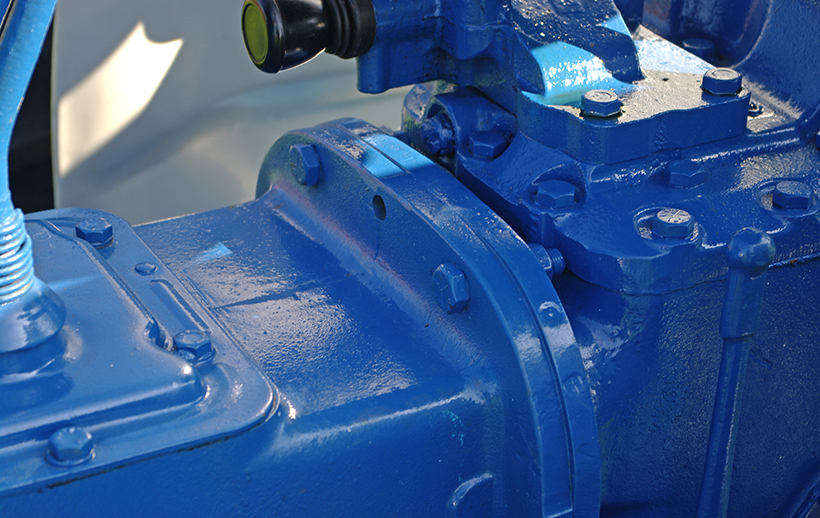 Tom prepared and painted all the chassis and most of the other parts, apart from the panels, which were all sprayed by Robert Chisholm.

He undertook the painting himself, with coats of primer and undercoat being applied to everything apart from the tinwork. Robert spray-painted all the panels and, once again, did an excellent job. With the painting completed, the finishing touch was the addition of the badges, insignia and transfers which, these days, aren’t too hard to find, and can be obtained from several of suppliers.

The Ford 3000 was completed in May 2008, just in time for its rally debut at the vintage show held each year at Springwood Park, in Kelso. This is just one of the events on Tom’s rally calendar, and he always tries to take a different tractor to each of the shows which he regularly attends. “To be honest, I often end up choosing one from the front of the shed, as picking one from the back does involve rather a lot of ‘shunting’! 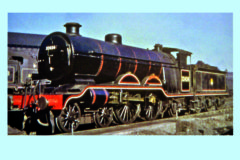 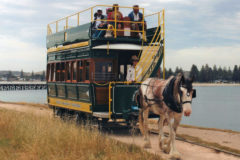