Bob Moorman reports on the long-awaited steaming of a rare and interesting Alley & MacLellan waggon that spent its working life in Argentina. 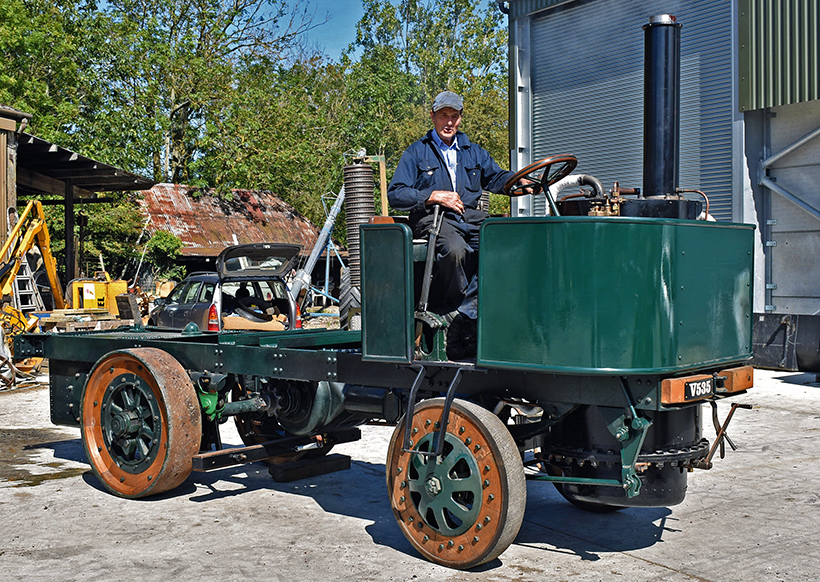 Will Day at the controls in September 2019, when the waggon was steamed for the first time. (Pic: Bob Moorman)

The Marden Motor Car Club has been in existence for 63 years, and has staged an excellent, small gathering, every July for many years near Headcorn, in Kent, thanks to the Day family.

Will Day joins in the fun and displays some of his cars, as well as his steam engines. This year, the plan was to steam his unique, 1907 Alley & MacLellan waggon No. 190 for the first time in public, which he’s owned for about 21 years. 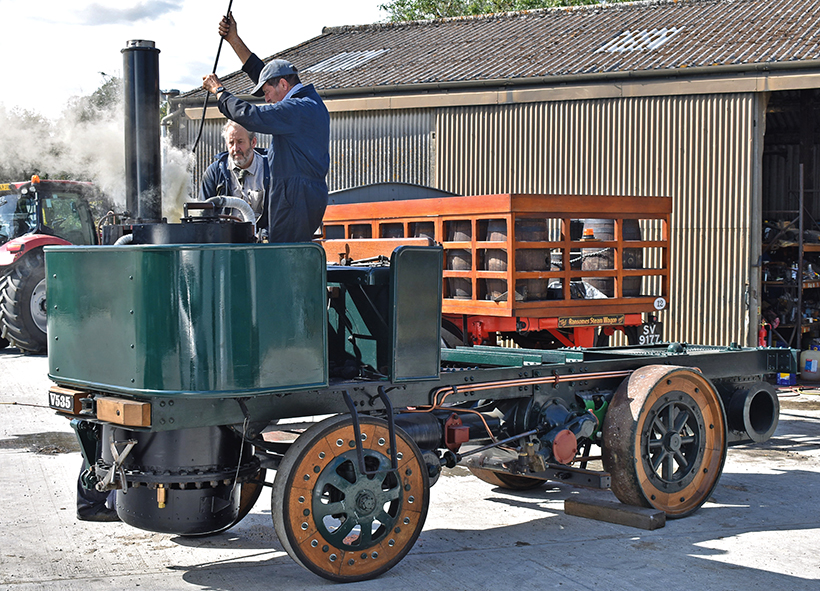 Will Day and Julian Hopper having the usual Sentinel problem; a lump of coal’s stuck in the firing chute. (Pic: Bob Moorman)

Alley & MacLellan waggons were built in Glasgow and marketed as ‘The Sentinel’. Production moved to Shrewsbury in 1915, and the company became established as The Sentinel Waggon Works Ltd from 1918.

Will’s waggon was exported when new to Argentina, and is thought to have been used in a railway goods yard in Buenos Aires. It has a vertical water-tube boiler, made by Abbotts of Newark. This is confirmed on the records of this fascinating company, which still exists today. It’s been established that it was built on June 28th, 1907, by riveter Morris. Using Sentinel expert Tony Thomas’s records, it’s also been confirmed as being waggon No. 190 of October 1907, making it by far the earliest Alley & MacLellan waggon in existence and, possibly, the second oldest steam lorry in the world. 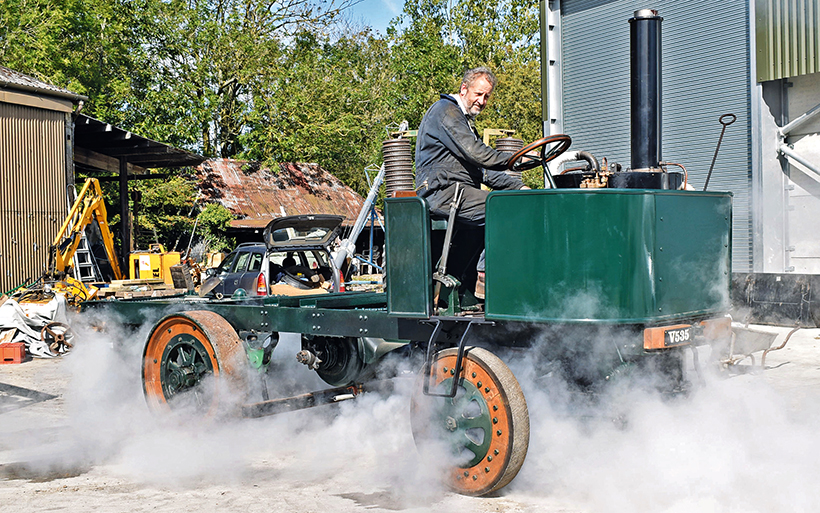 Julian proving that steam had been raised in 2019, before the drive chain was put on. (Pic: Bob Moorman)

Evidently, the waggon was looked after well and run on good quality water, as the boiler is still the original, and shows very little corrosion. When exactly the waggon stopped work isn’t known but, in about 1980, it was acquired by a local zoo keeper, Fabio Campagnucci. Then, in 1995, it was sold to an Italian who started restoring it, but he didn’t get far before it was sold again to, Flanders Surplus Supplies, in Belgium. That company advertised it for some time, before Will took up the challenge and bought it.

Seen at its first public display at the 2017 Weald of Kent Steam Rally at Woodchurch, as part of the special Weald of Kent Traction Engine Society 60th anniversary display.

This venerable beast was fairly complete compared to some, with various brass fittings missing along with some major parts of the water pump, water tank, brakes, top of the boiler and regulator. There was no body or cab, probably as it wasn’t supplied with a cab; the wheels are wooden with steel tyres. The basic design of the waggon was similar to the Standard Sentinel, though not many bits are interchangeable, including the injector. 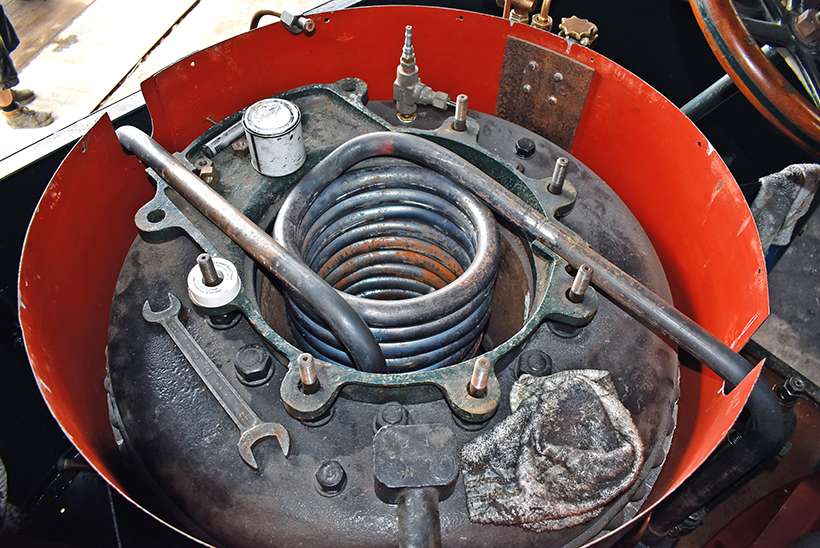 Top of the boiler showing the superheater coil in July 2019. (Pic: Bob Moorman)

A new cast top for the boiler had to be created, along with the firing chute, chimney and super heater coil, which goes around the outside of the firing chute in the middle of the boiler above the cross tubes. A new regulator had to be made, together with new boiler fittings which were completely different to other Sentinel waggons. 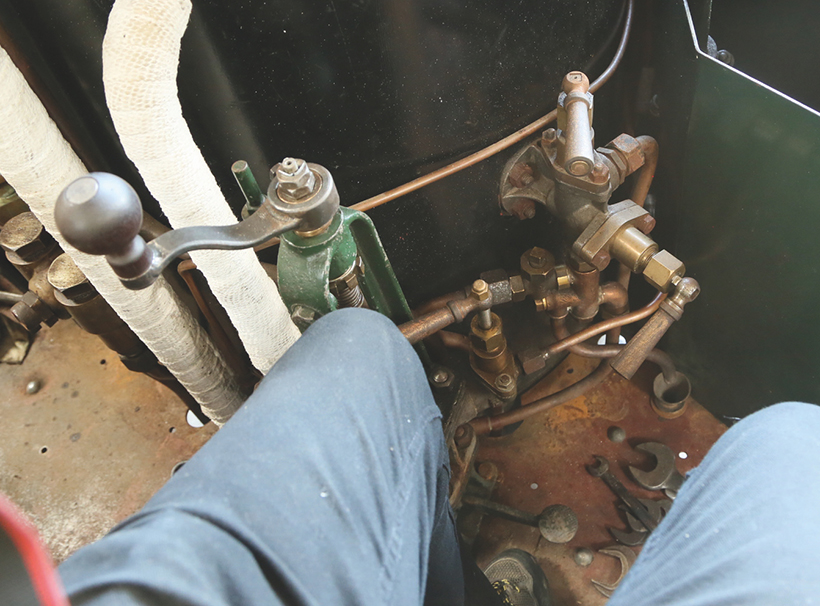 Driver controls, regulator on the left and injector to the right. (Pic: Peter Love)

Making the regulator was a challenge as all that was available to go by was a 1909 parts book. The first one made fell short during testing, and it became apparent that a second attempt would be required. It’s been a case of one step forward, two steps back for most of the time, as the project has progressed.

The horizontal engine was fully overhauled and a new water pump was made. The original wooden wheels were supplied with just a smooth, steel tyre without cleats; road grip would have been very negligible. 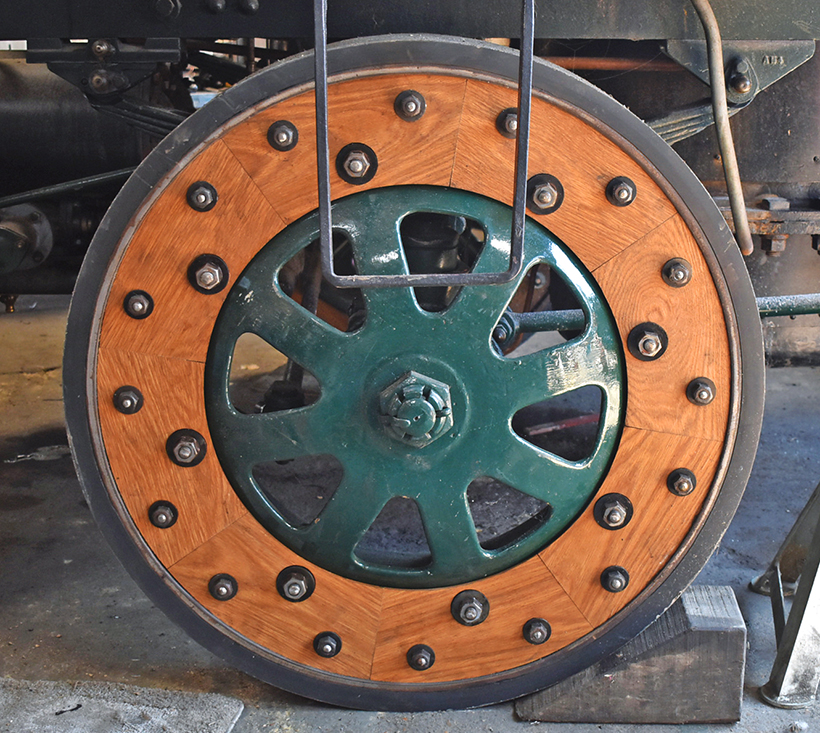 As such, the wooden section of the wheels needed to be remade as the originals, being over 100 years old, weren’t road-worthy. This proved to be problematic. Although the metal parts could be re-used, the wood chosen for the first attempt for the front wheels was too soft, despite being a recognised hard wood. After the waggon had been moved around the yard, it became obvious the new wheels weren’t strong enough, and that new ones would need to be made using English oak. 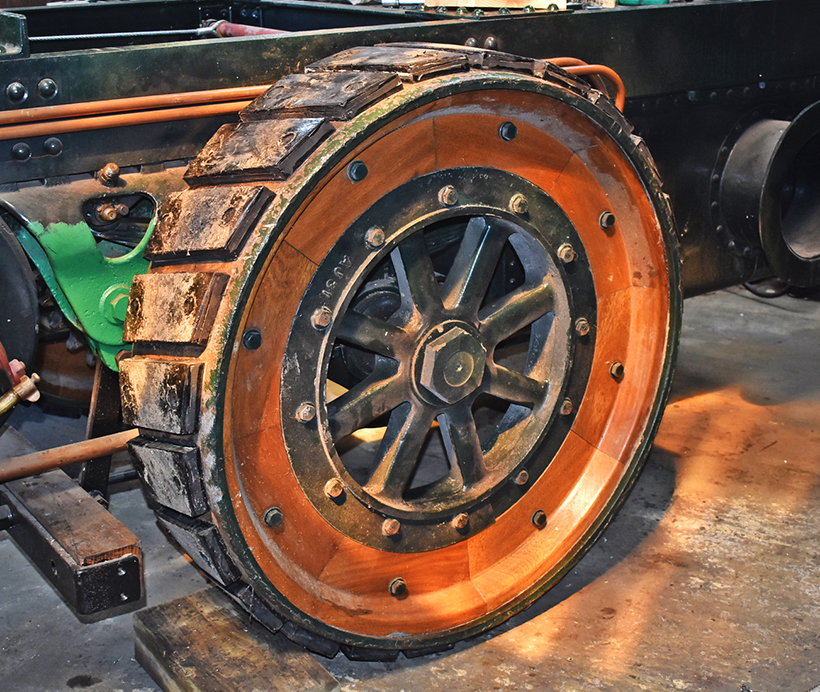 The rear wheels, which carry less load when the waggon is unladen, were fine until it was moved under its own steam for the first time, when it became apparent that they, too, would need to be renewed. It was also clear that the rear, ‘smooth’ worn steel tyres wouldn’t grip on modern surfaces; they even spun on the door track in the floor of the workshop! 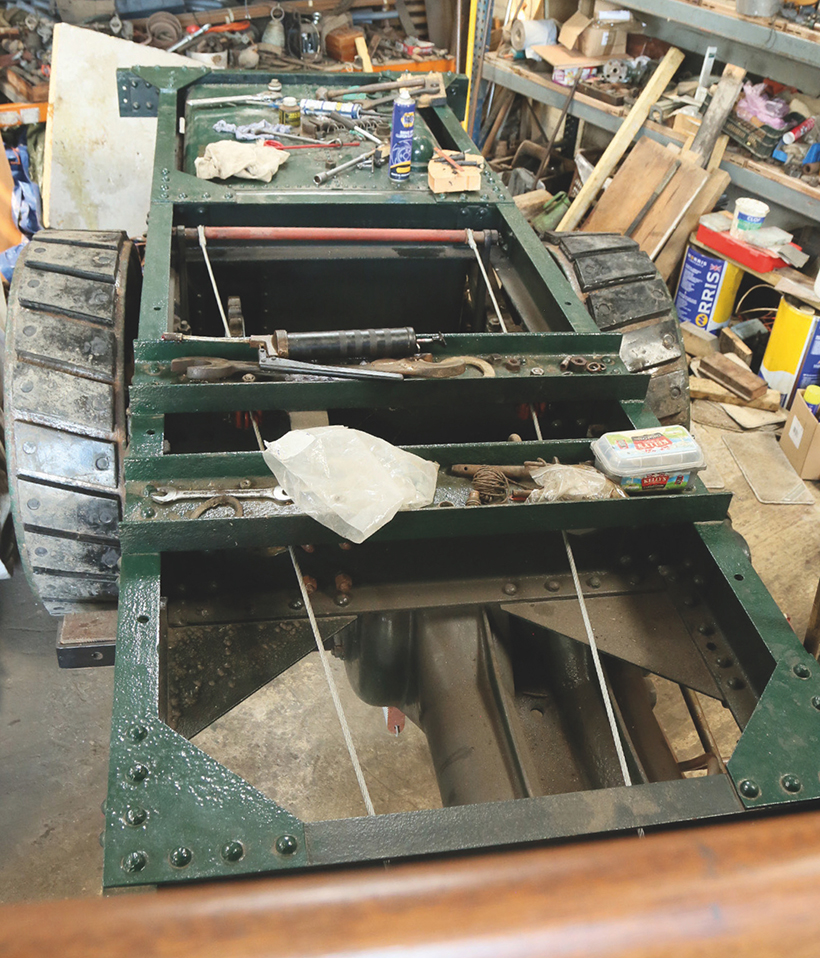 The chassis, looking back at the water tank at the rear. (Pic: Peter Love)

Having noted what a West Country company had developed regarding the use of a steel-backed rubber process, which it used in the plant and construction industry, it was agreed to make some excellent strakes to Will’s specification. They suit the waggon well, with its ‘Mark 2’ wooden wheels. The brake is only a wooden block acting on the outside of the rear wheels, so is only a parking brake; all other braking is done via the engine, as you do on a traction engine. It was planned to have the waggon’s public debut during the Marden Club’s fine event on Sunday 18 July. 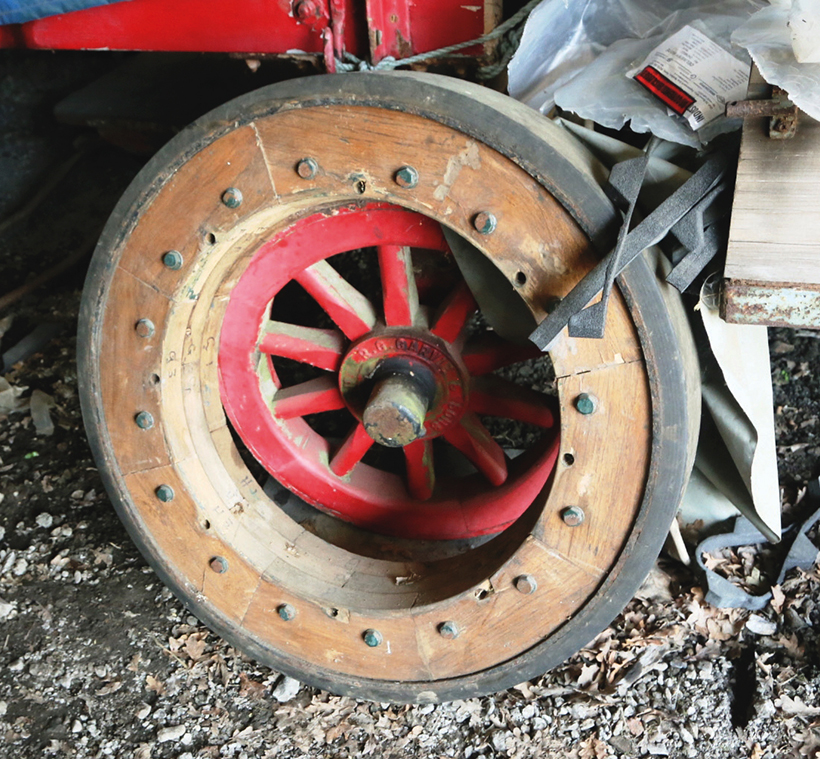 The Alley & MacLellan received its steam boiler inspection on the Thursday before the rally. All went well until the boiler inspector was just finishing off and was ready to write the certificate out, when the bottom boiler joint burst out, putting paid to any idea of steaming it. What a nightmare! 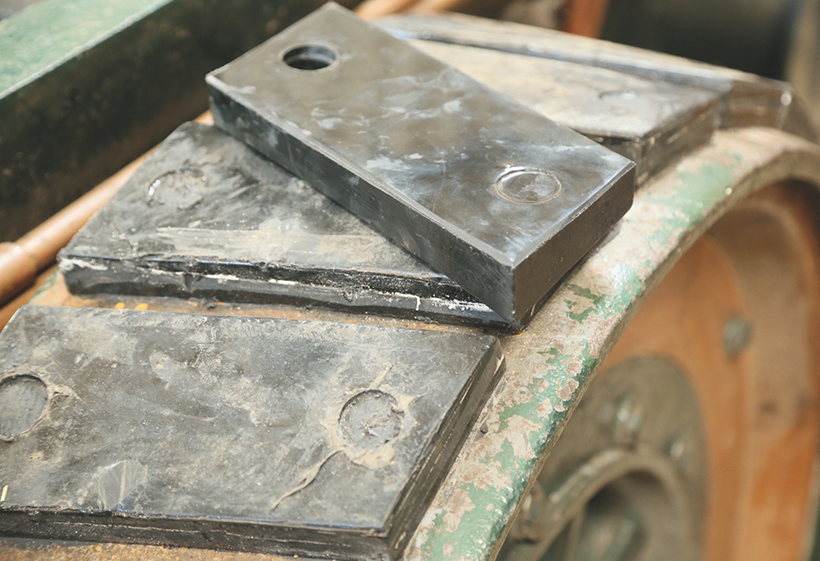 The new strakes are just what was needed. (Pic: Peter Love)

All Sentinel vertical boilers consist of an inner firebox and an outer shell, which are joined top and bottom via flanges and held together with a large number of square head bolts or studs. Unfortunately, to replace the joint the whole boiler has to be taken out of the chassis and split, which entails a large amount of work. All those concerned were naturally very depressed with the situation, as you can imagine, but the problem can be resolved.

Apart from the boiler, a body has still to be made along with other finishing touches. The waggon was not supplied with a cab, so that is one less thing to make, but it’s all in the future. Will Day would like to thank Julian Hopper and Kevin Town for all their help and hard work during the restoration. 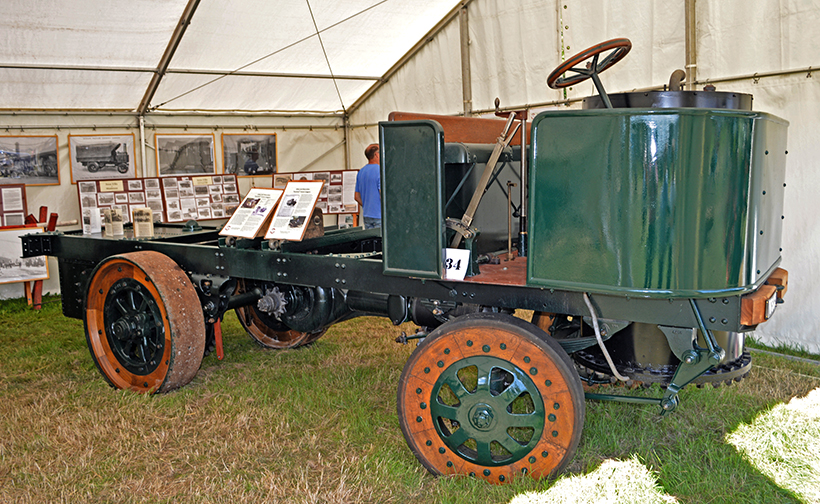 The waggon created quite a stir at the Woodchurch rally, back in 2017. (Pic: Bob Moorman)

As they get ready for the task of stripping the boiler down again, I know readers will really appreciate the high level of workmanship that has gone into the restoration of the waggon and all that effort will be very worthwhile in the end.

When finished, the Alley & MacLellan will provide a fascinating insight, and a unique one into the world of early commercial transport and the start of one of Great Britain’s premier steam waggon manufacturers. 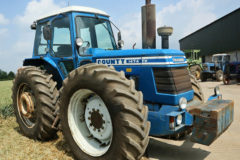 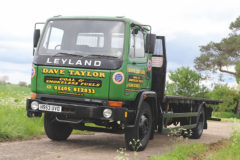