Keith Bullock has owned this 1971 Morris SunTor Camper since 1983 but, despite its superb condition, it’s never been off the road for a long-term restoration, as Mike Neale discovers. 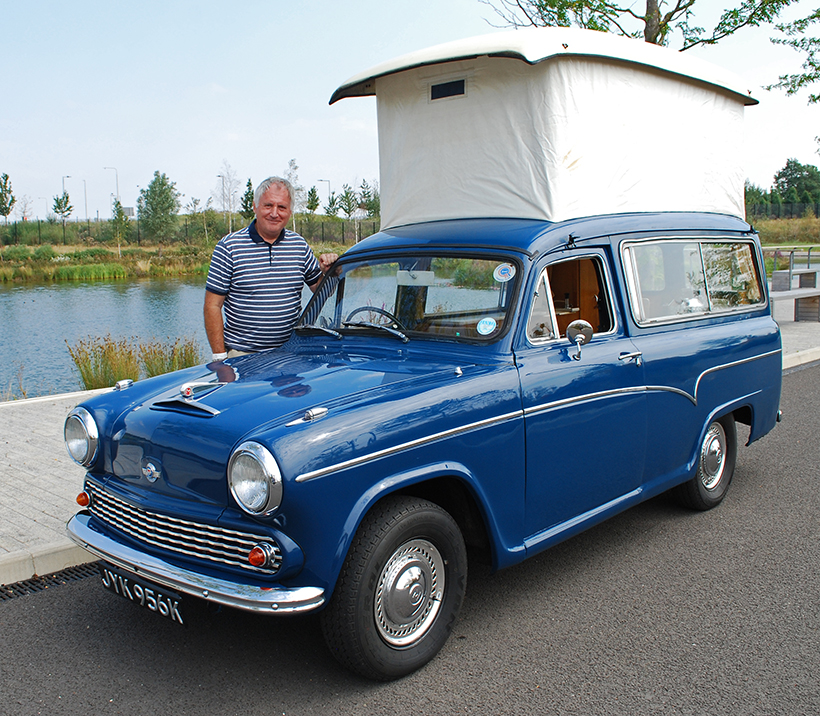 In 1962, the commercials were face-lifted with a wider grille and, at the same time, a Morris-badged version appeared with a straight-bar grille instead of the crinkly, Austin grille, although they were otherwise identical. In 1963, the 1,622cc B-Series engine was fitted and, in this form, they remained in production until 1972, and approximately 26,000 of the Morris version were made. 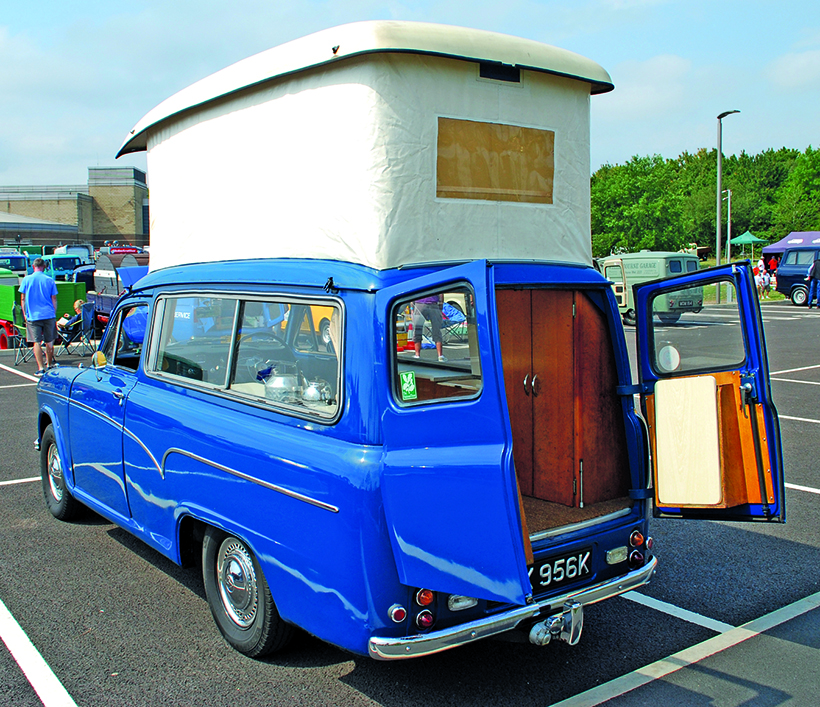 Roof up permits standing up within the van.

Productive partnership
Torcars of Torrington was founded in November 1968. The firm was a partnership between Ron Webster, who’d been building motorhomes to customers’ specifications in Hove, East Sussex, as R Webster & Co. for some years, and one of his satisfied customers and seasoned motor-caravanner, Alan Hutchinson. The latter had just given up his job as a computer salesman, was impressed with the quality of his Mk1 Ford Transit motorhome fitted out by Webster, and approached the company about investing in his operation.

At the time, the government was encouraging industry to locate in rural areas to create employment. Webster and Hutchinson looked at a few locations, before finding a three-acre factory site in Great Torrington, Devon, a location which gave rise to the new company name.

They also acquired some extra land adjacent to the factory site, to allow potential customers to come and camp and try out their new motorhome. Unlike other firms, they sold direct to buyers, rather than through distributors. 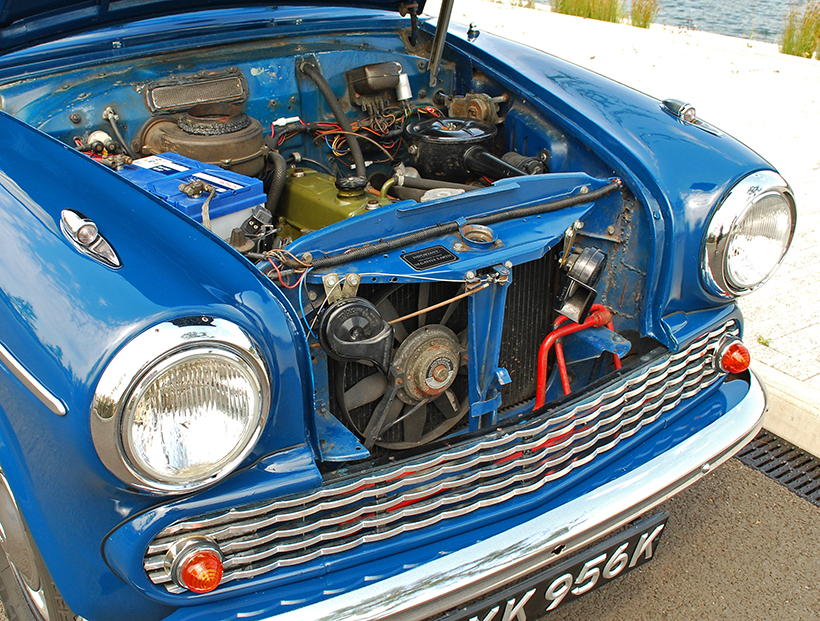 Access the the engine is generally straightforward, though some aspects are slightly trickier on the ‘pre-farina’ Cambridge family than the Farinas, for example oil filter changes and distributor servicing.

While the new factory was being built, they moved into a disused bakery in South Street, Torrington. Prototype campers had already been built in Hove, based on secondhand Austin/Morris A60 vans. The design was further developed, and the production version was ready in early 1969.

The A60 SunTor Estate Caravans proved to be popular as the quality was good and they would fit into a normal, single garage. The tall, rising roof – allowing for standing height – makes it easy to identify a SunTor conversion.

New premises
Sadly, Alan Hutchinson died in 1970, but his brother, Paul, came in as a new partner. By autumn 1971, the new factory was ready, and it and the campsite were officially opened in May, 1972. By now, the ‘A60’ van was out of production, so they went on to produce the Marina SunTor, as well as larger motorhomes based on the Sherpa, Commer and Toyota Hi-Ace vans. 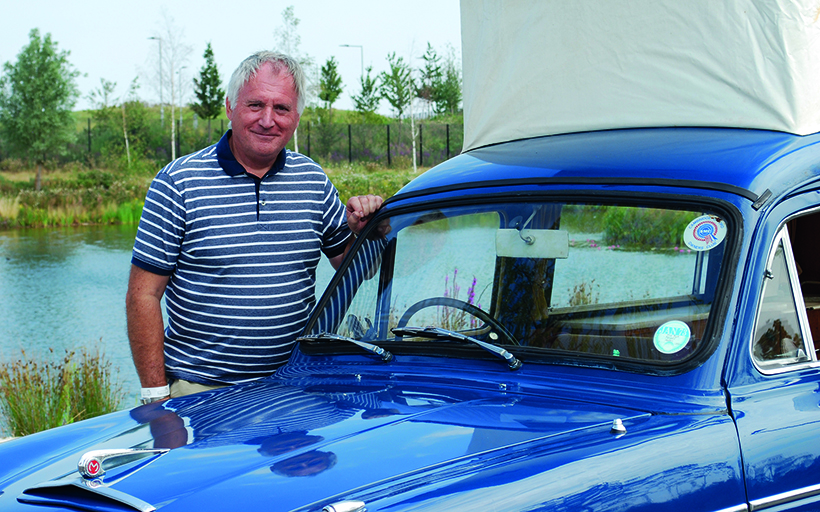 Incidentally, after Torcars left the South Street bakery, two former employees ­– Percy Colwill and Bryn Wathen – moved in, setting up C&W Conversions, and launching the Ford Escort Nimbus as well as the larger, Nimrod motorhomes, that were based on either a Ford Transit or Bedford CF van.

In 1973, Mumford acquired a 50% share in Torcars. Ron and Mary Webster resigned in early 1978, and the firm ceased trading in 1979. But that wasn’t quite the end of the story, however, as Torcars was bought by Brownhills of Newark, Nottinghamshire, in 1980, which continued to use the SunTor brand name. Brownhills had been in existence since 1962, selling a mix of motorhomes and Triumph cars but, by the late 1970s, it sold only motorhomes. Its first SunTor had a different roof design, and was based on the Morris Marina and, later, the Ital. Brownhills is still trading in Newark today, as a motorhome dealer.

The smart, Morris A60 SunTor seen here has been owned by Keith Bullock of Hollywood (the one near Birmingham!), since 1983. At the time he was looking for a Farina Cambridge or Oxford estate, but his dad spotted this SunTor in a garage in Wokingham, Berkshire, where it had been traded-in. It was looking slightly neglected, but was basically sound. Thinking that this would be a practical alternative, he paid £470 and drove it home. 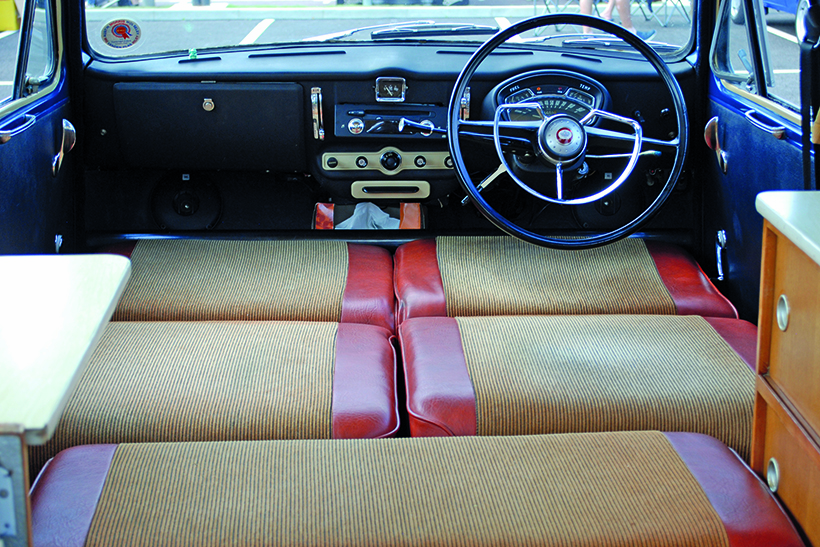 In double-bed form. The seats have been retrimmed using material that is close to the original. The ½ ton vans retained column gearchange to the end of production in 1972.

As and when…
Since then, it’s never been off the road for more than a couple of weeks. “It’s just been a question of keeping on top of it,” notes Keith. “Restoration has been carried out in bite-sized chunks. Too many big restorations get started, but never finished! Most body panels have been renewed over the years, as and when required. As they’d been sprayed at different times, they all looked slightly different, but I was recently able to make use of being on furlough to treat the van to a full respray.”

Keith took all removable panels off and resprayed them in his shed, while the remaining body shell was painted in the garage, using cellulose paint in the van’s original shade of Teal Blue.

The van was built in November 1971 at Longbridge. Unlike many SunTors, it has a London registration, rather than a Devon one. That’s because the first owner bought it to run as a van for a while, possibly to avoid some Purchase Tax, before sending it down to Torcars for conversion. 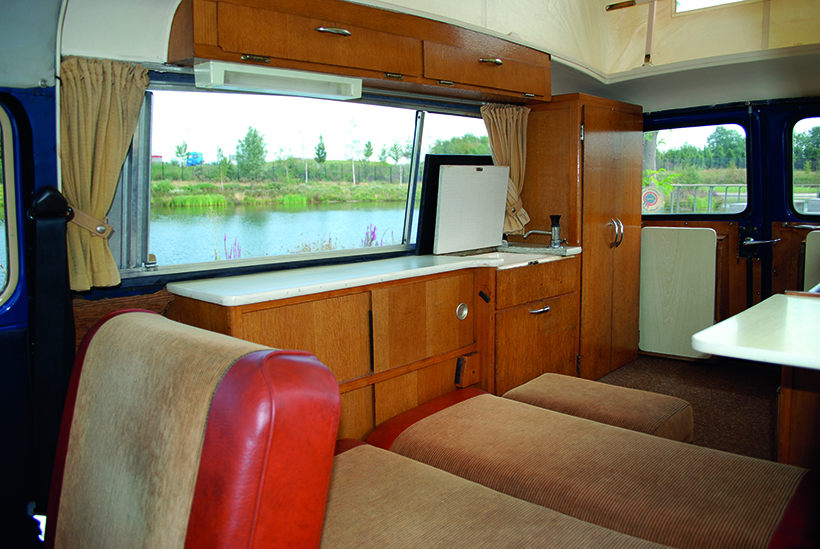 Interior trim and fittings are predominantly original, and have been carefully conserved rather than restored.

“I once ran into the original owner, who started to tell me about the history, but then his bus came and off he went, before I could get his details. I’ve not seen him since,” explains Keith.

A two-ring hob is fitted on the left-hand side, with a small sink under a hinged flap and a full-height wardrobe on the right. There are low cupboards and worktops on both sides, with extra storage in small, high-level lockers and in the back doors of the van. The cabinets are all made of real wood, giving an attractive appearance to the interior. The seat squabs can all be laid flat to form a bed for two people.

Interior details
The upholstery has been re-trimmed. The cloth that Keith found is the same colour, but a slightly different pattern to the original. All the camping fittings are original, as is the plastic of the raising roof and all the exterior chrome trim. Except for the radiator grille which, as many of you have no doubt already spotted, is actually the crinkly Austin version, rather than the straight-bar Morris type. “That’s due to a bump with a Morris Marina on a roundabout in 1985, the rear bumper of which was at exactly the same height as my grille,” explains Keith. “At the time, I couldn’t get a Morris one, and I figured that a nice Austin grille was better than a battered Morris one. In fact, I’m still looking for one.” 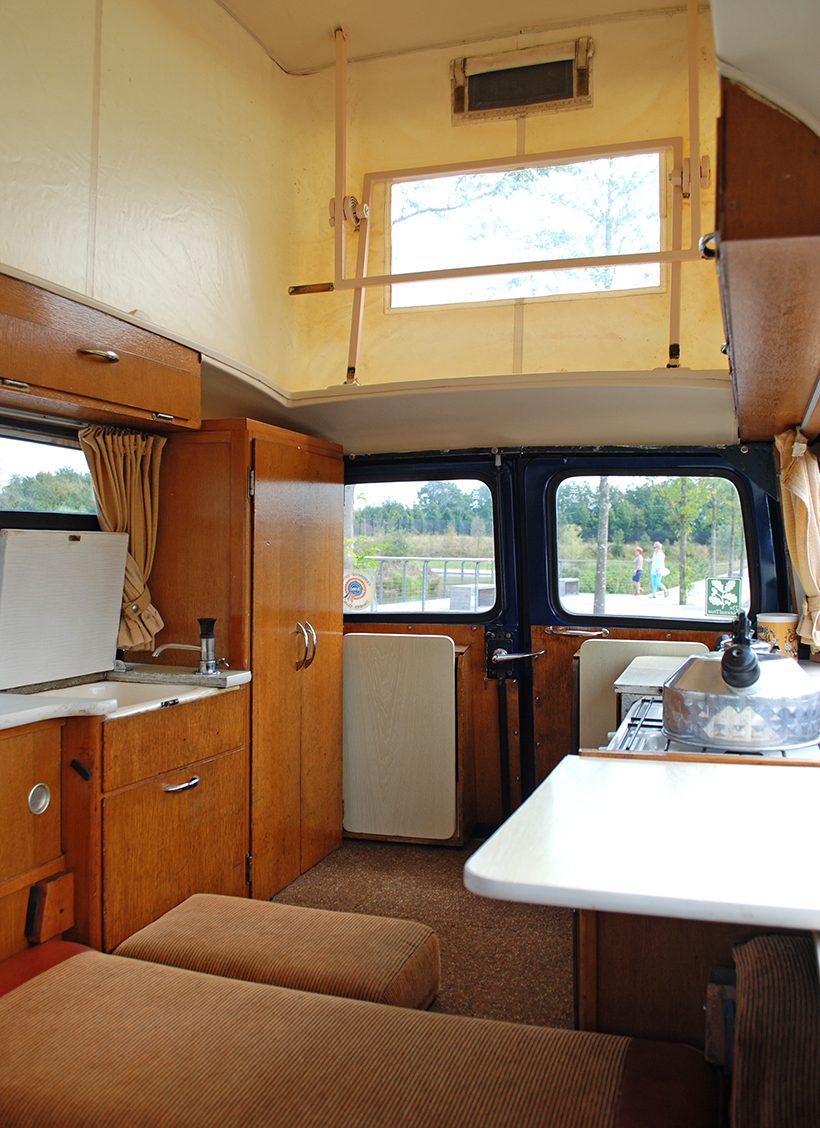 Inside, with the roof up.

The van is fitted with a 1,622cc B-Series engine out of a Wolseley 16/60, so it’s a higher-compression unit than the original. This went in when the van had done about 100,000 miles. It’s now covered around 165,000. It also has a saloon differential fitted.

“Mechanical spares are easy to get, as you’d expect with a B-Series-engined vehicle. It has an MGA clutch fitted, for example. I tend to use Longbridge Motor Spares. Body parts, however, are not easy to find,” laments Keith.

“The Cambridge-Oxford Owner’s Club is always useful. I’m actually the organisation’s second longest-serving member! It seeks out and endorses suitable suppliers. I think it’s crucial to be a member of an owners’ club, to keep old cars going. Members are very useful for advice, as are the forums. There’s nothing like speaking to someone who’s actually done a job themselves, before you attempt it.”

Keith is also a member of the Torcars SunTor Register, which caters for all Torcars, Brownhills SunTor, Nimbus and C&W conversions. As well as issuing a regular newsletter – Let Sleeping Bags Lie – it organises an annual gathering in Torrington. 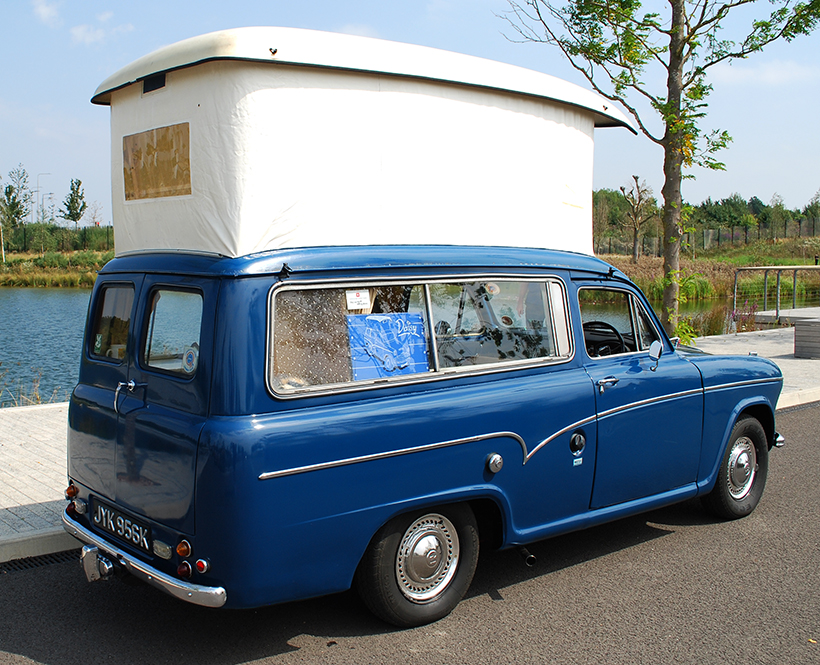 It’s in the blood!
Keith’s first car was a Morris Oxford Series VI, which he bought in 1975, and still owns. He’s also had a Vanden Plas Princess 4-Litre R and a Wolseley 16/60. Clearly Cambridge-Oxfords and their cousins are in his blood.

The van is known as Daisy, and a work colleague of Keith’s made the picture in the rear side window. I asked him how the name came about. “My late wife and I had been to see a West End musical called Daisy Pulls it Off. A short while afterwards, we were crawling up a long, steep hill, but the van pulled it off, and so the name Daisy seemed very apt and has stuck!”

I noticed that a towbar was fitted. “I used to tow a caravan – a 1973 Panther – but I no longer own that. We often used to go camping in Daisy, but less so now. I do still regularly use her though, both for general use and for shows although, obviously, I haven’t been able to go to many this year.”

Hopefully, Daisy will appear at a larger number of events in 2021. She’s certainly in good hands! 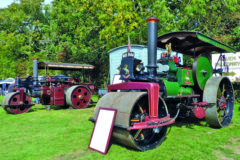 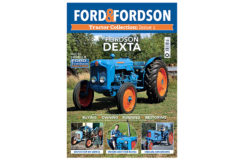