A century ago, the first Cunard ‘Queen’ was in service, when the line briefly operated the former German liner, Kaiserin Auguste Victoria. Peter C Kohler reviews her ensuing career as Canadian Pacific’s Empress of Scotland. 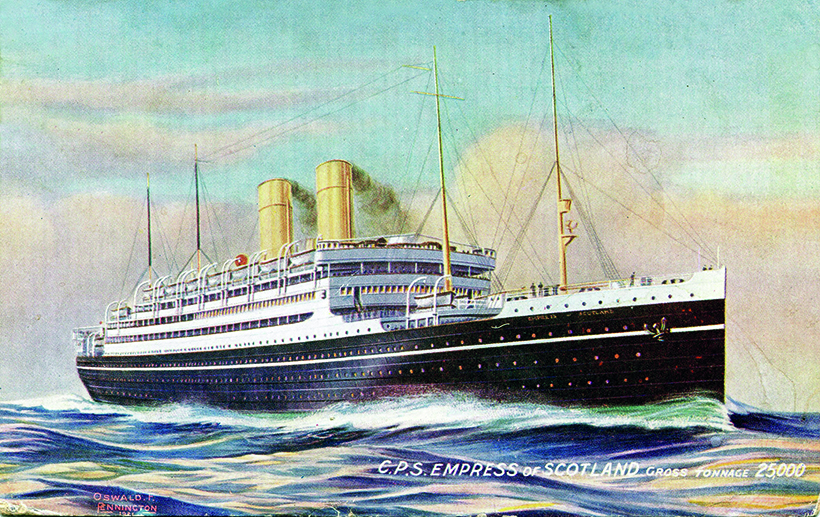 Unlike the Belfast-built Amerika, the new ship (to be named Europa) was ordered from a German shipyard, Vulkan-Werft’s Stettin yards. This symbol of German maritime invention and industry was deserving of a royal christening, and she was launched by Kaiserin Auguste Victoria of Schleswig-Holstein, Empress of Germany (1858-1921), on August 29th, 1905. As a gesture to her godmother, Ballin had the ship instead named in her honour. 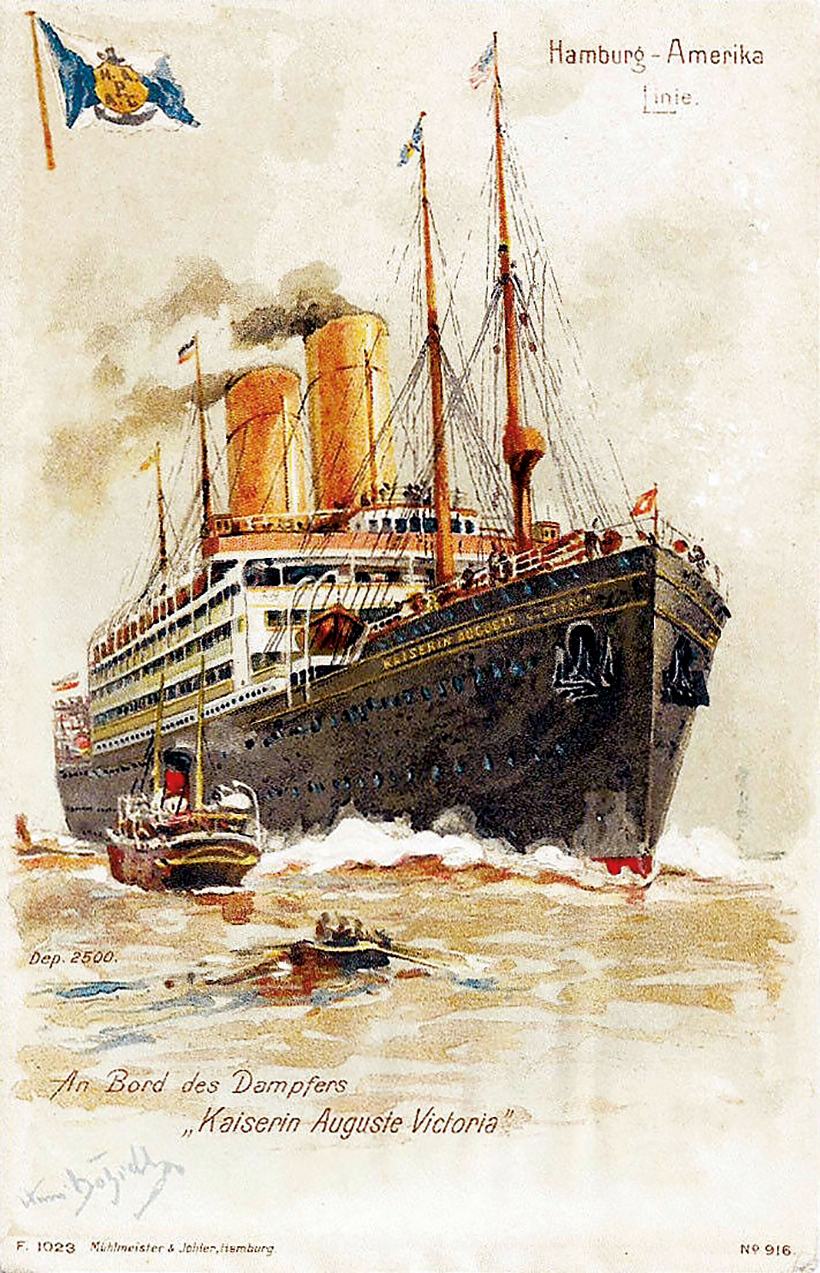 A postcard of HAPAG’s Kaiserin Auguste Victoria, emphasising her imposing size and presence. Artistic licence wasn’t needed; she was the largest liner in the world until Lusitania, in 1907. (Author’s collection)

The 24,581grt Kaiserin Auguste Victoria was the most luxurious ocean liner in the world, and the largest until Lusitania. Her maiden voyage, from Hamburg to New York, began on May 10th, 1906. With war clouds gathering after her final crossing from New York on July 11th, 1914, she was laid-up in Hamburg and sat there throughout World War I.

After the Armistice, like most of the German Merchant Marine, Kaiserin Auguste Victoria was seized by the Allies as reparations, and awarded to Britain’s Shipping Controller, but was initially turned over to the Americans, to help repatriate troops from Europe. 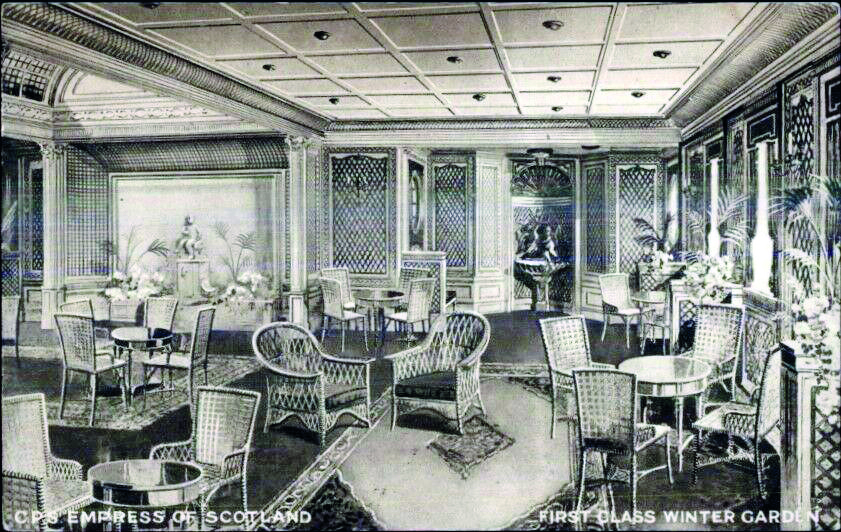 One of Kaiserin Auguste Victoria’s innovations was her First Class winter garden, the first of its kind in an Atlantic liner. It featured fountains, wicker furniture and a casual (for then) elegance. Henceforth, most liners featured such a facility, right up to QM2.

USS Kaiserin Auguste Victoria was commissioned on February 15th, 1919, at Pauillac, France. She departed Brest on April 8th and arrived at Hoboken on April 17th. Quickly given berths for 4,000 men, she had more than 6,000 returning American troops aboard on her next arrival, on May 23rd. Her final voyage under the Stars and Stripes concluded at Hoboken, on August 22nd.

The Americans had no further use for the ship, and on January 3rd, 1920, Kaiserin Auguste Victoria was chartered to Cunard Line by the Shipping Controller, partly to fill in for Aquitania while she was being converted to oil-burning. Sailing from New York on January 17th, she reached Plymouth on January 29th, 24 hours late after encountering a hurricane. She left Liverpool on her first westbound crossing on February 14th. On her tenth and final voyage, Kaiserin Auguste Victoria sailed from New York on January 15th, 1921. 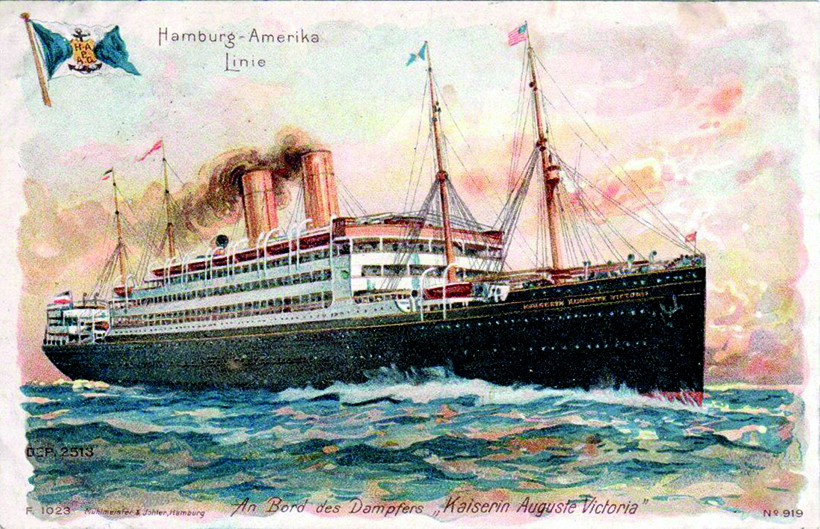 On May 3rd, 1921, Canadian Pacific purchased the vessel for £353,000 from the Shipping Controller. Although CP announced on June 4th that the renamed Empress of Scotland would make her first voyage from Liverpool to Quebec on July 29th, with sailings through to October, she was instead chartered on July 7th to the American travel agency, Frank C Clark, for its 17th Mediterranean cruise from New York in February 1921.

Her refit, which included conversion to oil-burning, was brought forward, and the summer crossings were cancelled. On August 13th, 1921, Empress of Scotland sailed for Vulkan-Werft’s Hamburg yard. Canadian Pacific announced on December 1st that she and Empress of France would start a new express service from Southampton and Cherbourg to Quebec, in April 1922. 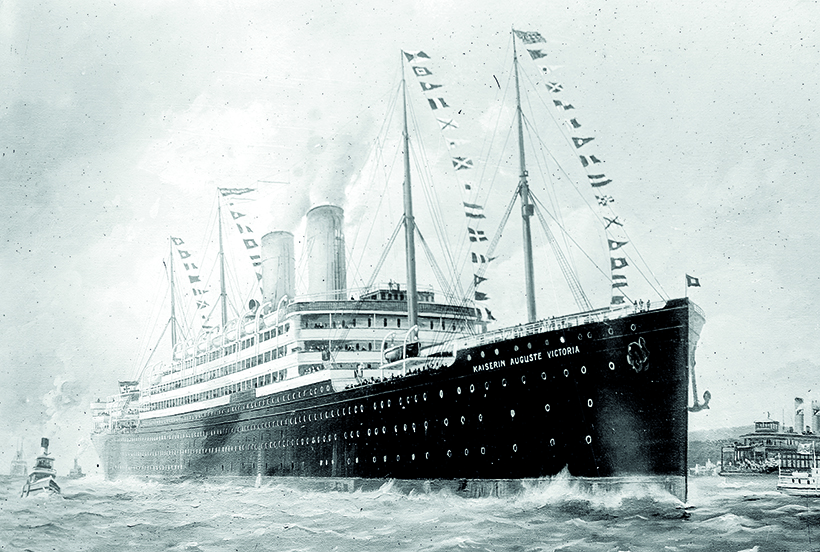 Elegant Empress
Empress of Scotland was the largest vessel in the Canadian Pacific fleet until Empress of Japan arrived in 1930, and introduced luxuries hitherto unknown on the Canadian route. Re-measured at 25,037grt, with dimensions of 705ft overall by 77ft beam, Empress of Scotland was still the ninth largest liner in the world, in 1922. She had nine decks, including three superstructure decks, and was the largest ship ever built with all reciprocating machinery. This consisted of two sets of quadruple expansion engines, developing 17,500shp, driving twin screws, eight double-ended 220psi boilers, with 51 oil-fired furnaces and 2,475 tons of bunker capacity. She had a speed of 17.5 knots, while her prodigious cargo capacity totalled 11,600 tons deadweight in seven holds.

Crossing and cruising
After trials in the North Sea, Empress of Scotland arrived at Southampton on January 13th, 1922. Her maiden voyage commenced at 1400, seven days later. She called at Halifax on January 30th, and reached New York the following day. 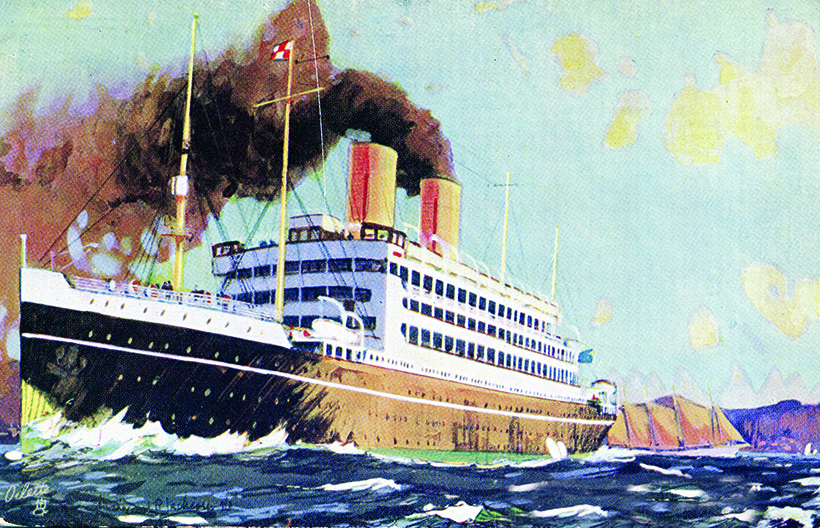 A postcard of Empress of Scotland by the renowned British maritime painter, Norman Wilkinson. JH Isherwood wrote of her CP livery: ‘… her forecastle was now painted white, biit topping green and a broad white ribband added for her entire length. This set off her lines excellently and she looked her best, a truly impressive ship.’ (Author’s collection) 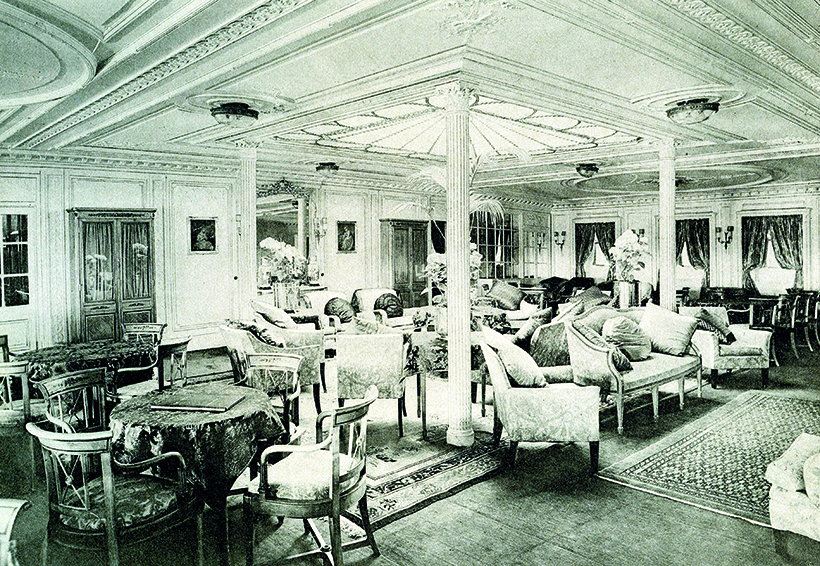 Empress of Scotland inaugurated CP’s new Southampton-Cherbourg-Quebec service on April 22nd, 1922, arriving at Quebec on April 30th. Her first eastbound crossing of May 3rd proceeded to Hamburg, which would feature in most sailings. 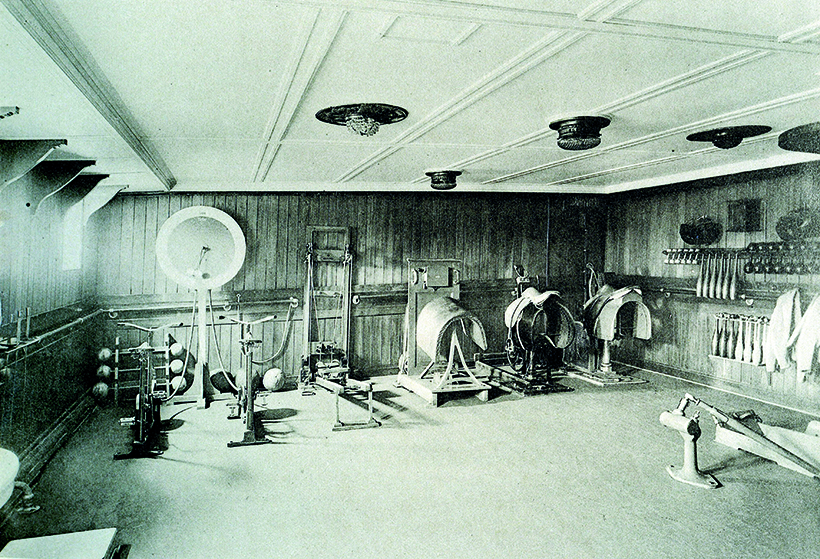 Among those landed at New York on January 28th, 1923, was the crew of the fishing schooner Clintonia, who had been rescued in rough seas 100 miles south of Sable Island. Empress of Scotland sailed on her second, long Mediterranean cruise for Clarks on February 3rd. 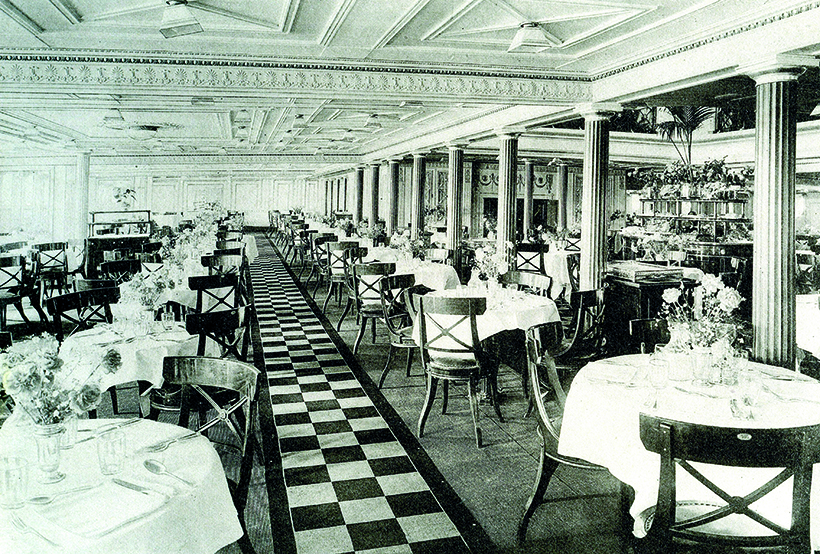 Coming into Southampton from Hamburg on August 22nd, 1923, she struck a submerged wreck three miles west of Nab Lightship, holing her forward and damaging her starboard screw and machinery. Her voyage was cancelled, causing major inconvenience to her passengers, those already aboard and the 1,420 embarking, with few spare berths in other liners. In the end, CP chartered the Ellerman liner City of Paris to take them to Quebec. A strike prevented repairs in Southampton, so Empress had to go to Liverpool. 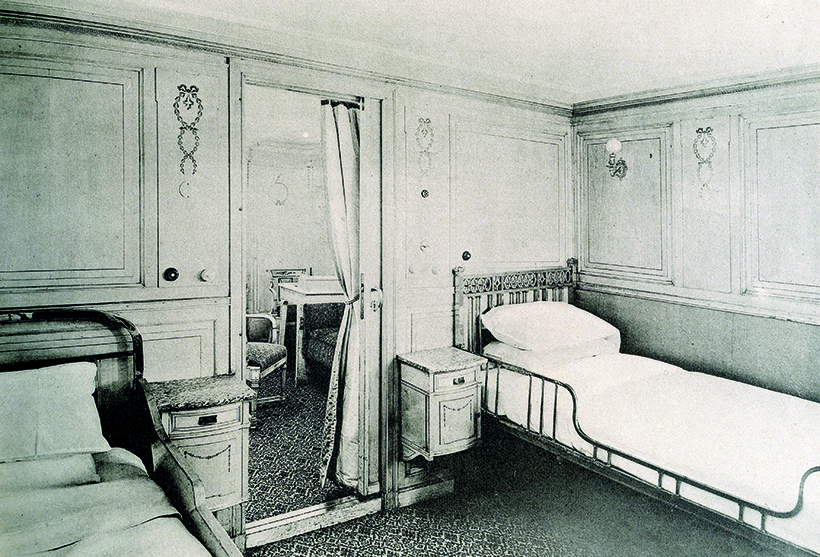 Building on the success of her two previous trips, Empress of Scotland operated the first CP cruise, from New York to the Mediterranean, starting on January 14th, 1924. In December 1925, she began a 129-day world cruise. Departing New York on December 4th, she visited 19 countries and travelled 30,000 miles. A second world cruise – of 132 days – began on December 2nd, 1926. Of the 484 passengers, there were said to be 60 millionaires. 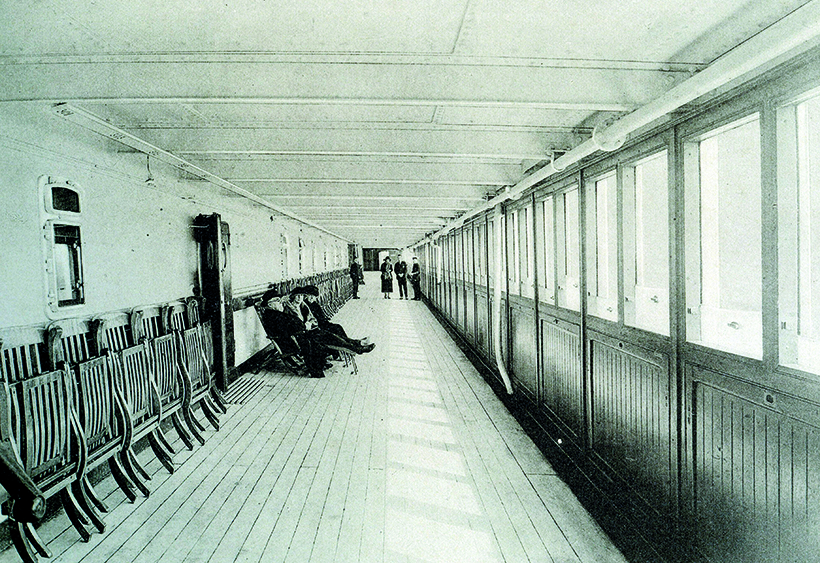 Returning from a Royal Visit to Canada, British Prime Minister Stanley Baldwin sailed in Empress of Scotland on August 17th, 1927, followed by the Prince Wales and Prince George on September 7th. The following October, Canadian Prime Minister Mackenzie King returned in the ship. For the 1928 season, only Empress of Scotland continued calling at Hamburg, and made her last calls at the end of 1929. 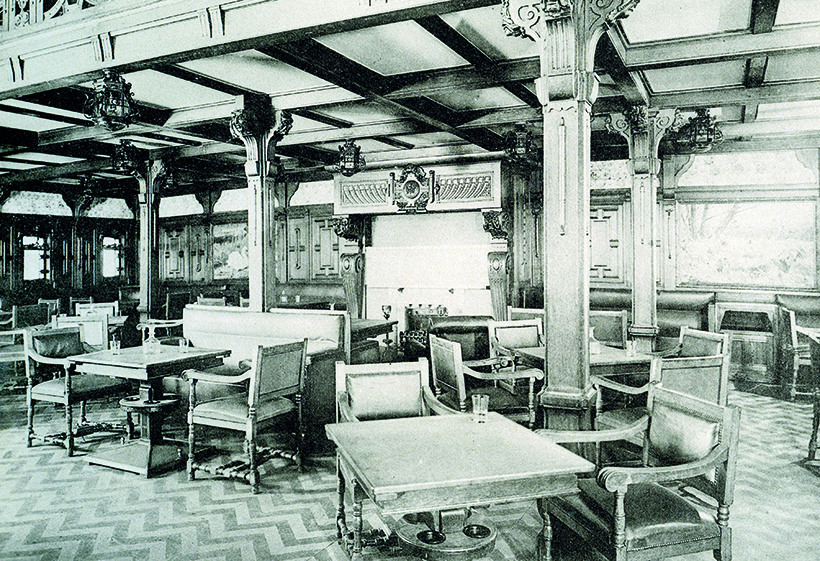 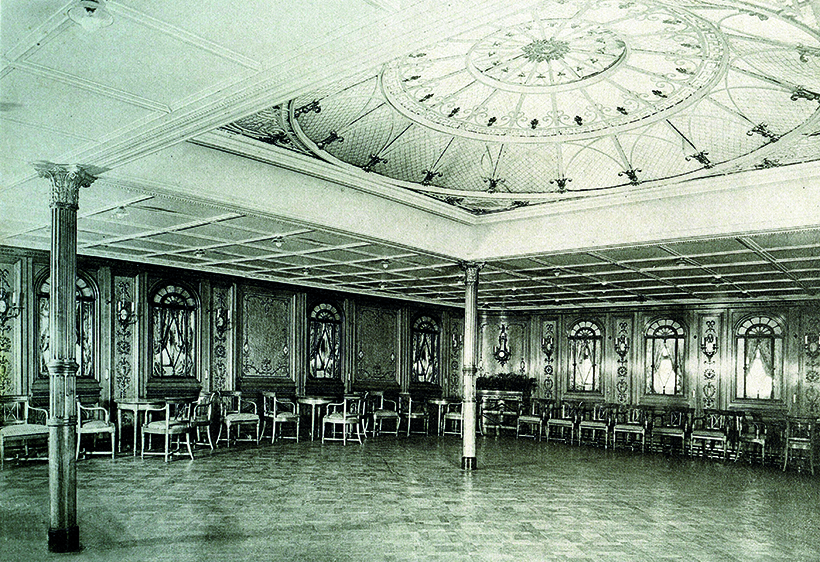 Empress of Scotland left New York on February 3rd, 1930, on her final 73-day Mediterranean cruise, which ended at Southampton on April 9th. Beginning her last Atlantic season, she arrived at Quebec on April 30th. On September 30th she said farewell to Canada, and docked at Southampton on October 7th, at 16:15. 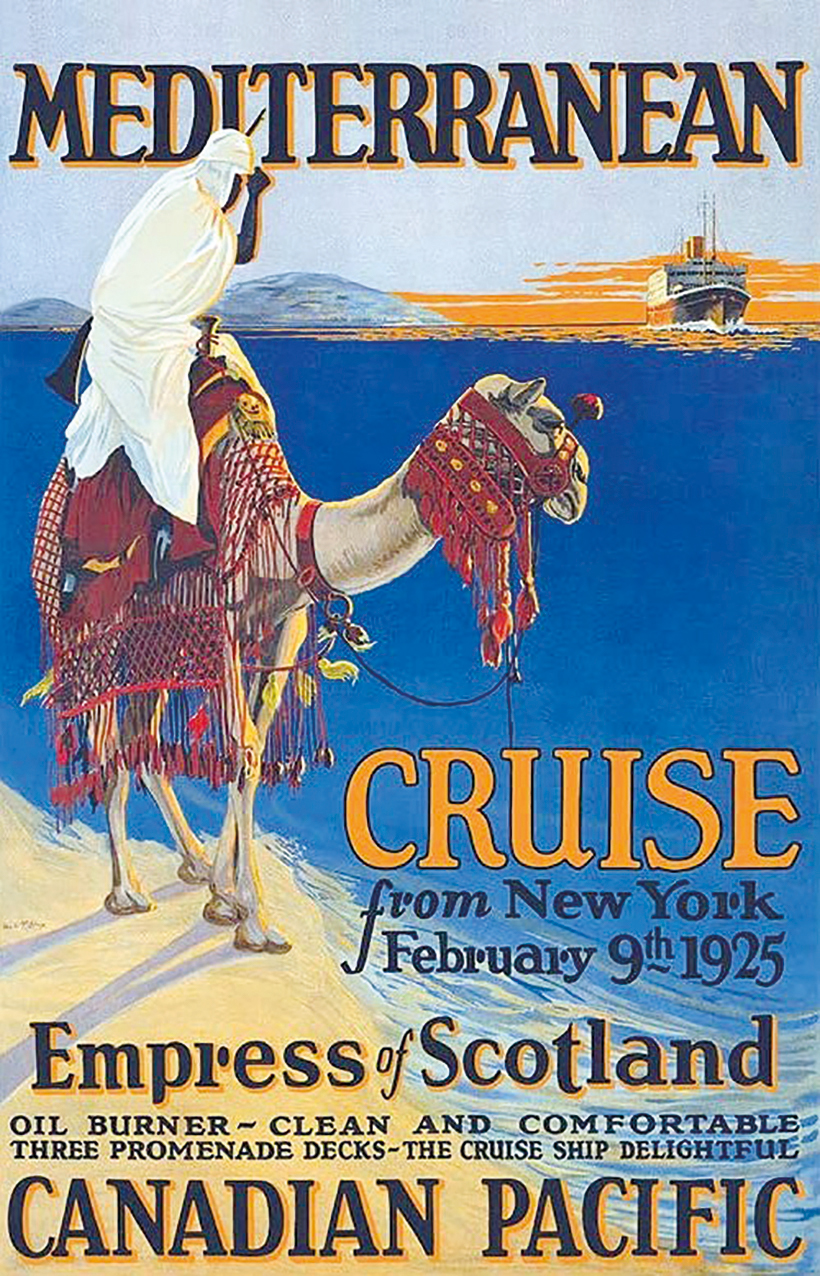 A poster for Empress of Scotland, ‘The Cruise Ship Delightful’, for her February 1925 Mediterranean cruise. That year she completed two cruises, as her first world cruise departed that December.

A fiery end
With her replacement in service, Empress of Scotland was sold on November 15th, 1930, for £60,000 to Hughes Bolckow Shipbreaking, and arrived at Blyth on December 4th, being opened for public inspection before the sale of her fittings. However, fire broke out due to a suspected short-circuit at 04:00 on December 10th and, in a spectacular blaze, the ship was completely gutted. Holes were cut in her hull to let her settle upright at her pier. 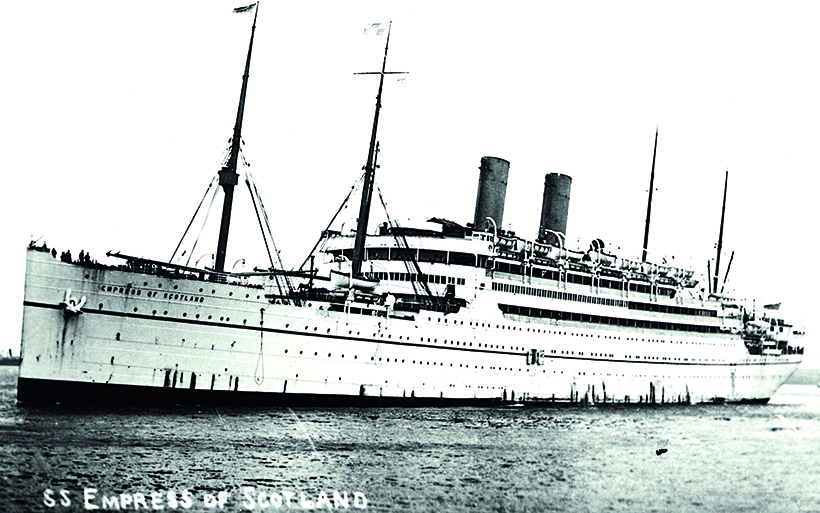 Empress of Scotland as a ‘White Empress’; the Atlantic Empresses donned the white hulls of their trans-Pacific fleetmates in 1930, her final year of service. (The Allen Collection)

She was raised on March 1st, 1931, after her superstructure was cut down, but fire again broke out on May 6th, when torches set oil alight. The hull broke into two on June 1st, as she was being moved, and the wreck was broken up where it lay. A third and final fire occurred on the March 22nd, and the tortured remains of Empress of Scotland finally disappeared by October 17th. 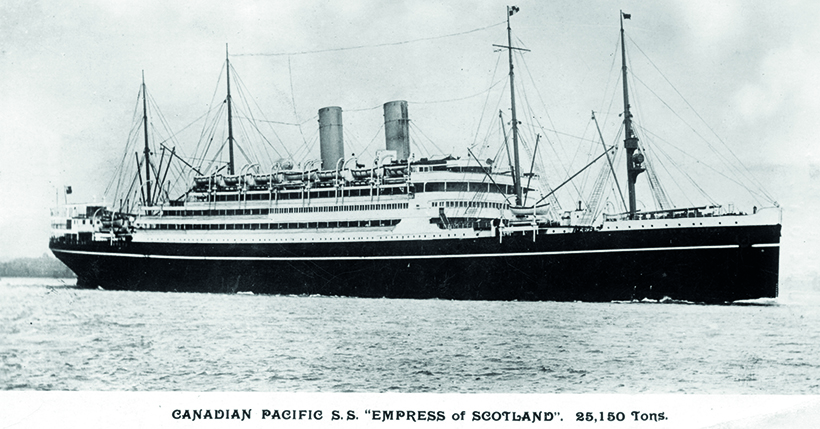 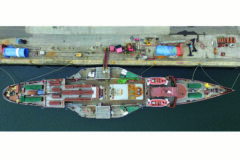 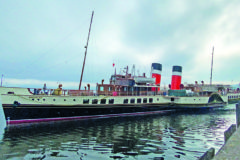