Originally built to allow Germany’s naval vessels quick passage between the North Sea and the Baltic, the Kiel Canal soon became a busy, commercial waterway, as we explain. 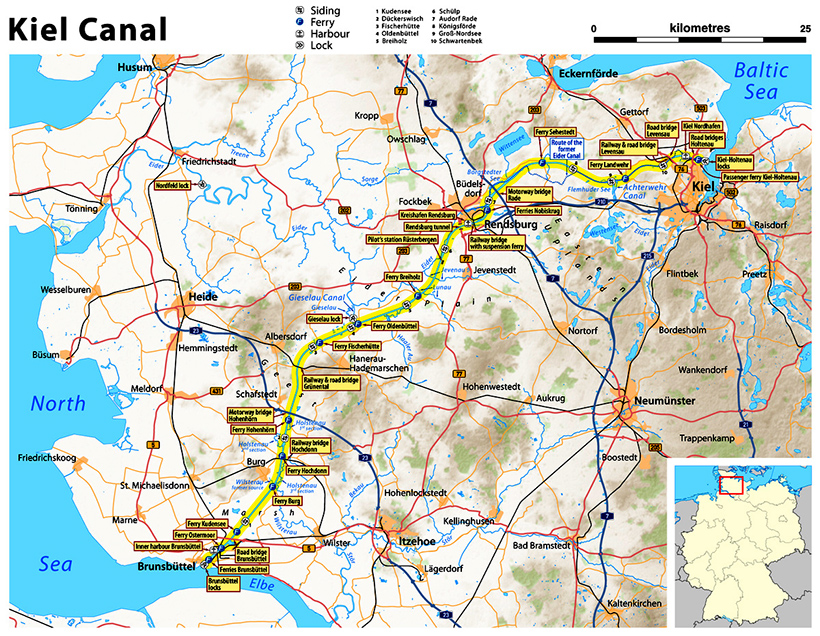 The Kiel Canal has been one of the world’s busiest waterways for more than 120 years. It was completed in 1895, but later widened, and links the North Sea, at Brunsbüttel, and the Baltic at Kiel-Holtena. Its construction obviated the need for ships to sail around the northern tip of Denmark, providing a shortcut.

The canal is the most heavily used artificial seaway in the world and, excluding small boats, an average of 80 ships per day used it in 2016. Known as the Nord-Ostsee-Kanal, and formerly the Kaiser-Wilhelm-Kanal, it’s 98km long, and is situated in the German state of Schleswig-Holstein. Using the Kiel Canal save ships about 250 nautical miles, saving them having to round the Jutland Peninsula and face the storm-prone seas typically found there. 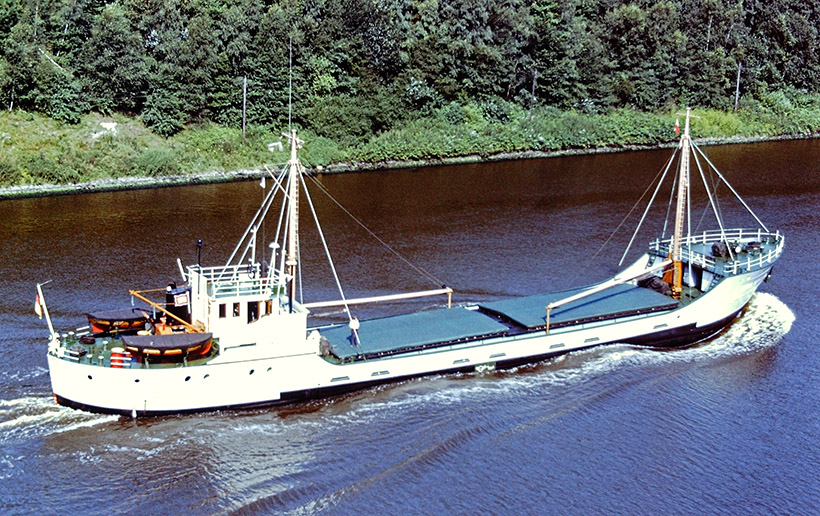 The coaster Gesa Meinken, owned by Ernst Meinken, was completed in 1951 and went to the breaker’s yard in the mid-1980s. She was only 161ft in length and her service speed was eight knots. Grey-hulled and with two hatch covers, she was photographed on August 2nd, 1972, near the high-level railway bridge that crossed the canal.

The first connection between the North and Baltic Seas was constructed while the area was ruled by Denmark-Norway. It was called the Eider Canal, and made use of stretches of the Eider River. Completed during the reign of Christian VII of Denmark, in 1784, the Eiderkanal was a 43km part of a 175km waterway running from Kiel to the Eider River’s mouth, at Tönning, on the west coast. It was only 29m (95ft) wide, with a depth of 3m (10ft), which limited the vessels that could use the waterway to those of 300 tonnes or less. 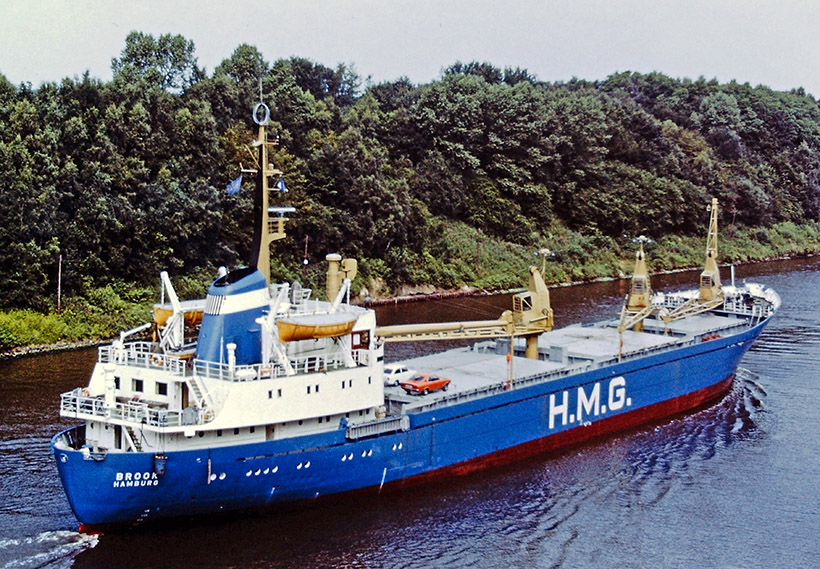 Brook, owned by HM Gehrckens, photographed on July 29th, 1972, when she was only five years old. She was built by Werft Nobiskrug at Rendsburg, a small city located about midway along the canal. In 1981, she was renamed Canaria, but her career came to an end when she arrived at Porto Nagaro, Italy, on November 10th, 1987, for demolition.

In the 1860s, a new canal was considered by ship owners and by the German navy, which wanted to link its bases in the Baltic and the North Sea, saving the journey around Denmark. Construction started at Holtenau, near Kiel, in June 1887, with more than 9,000 workers taking eight years to complete the construction. On June 20th, 1895, the canal was officially opened by Kaiser Wilhelm II, and enabled ships to transit from Brunsbüttel to Holtenau. 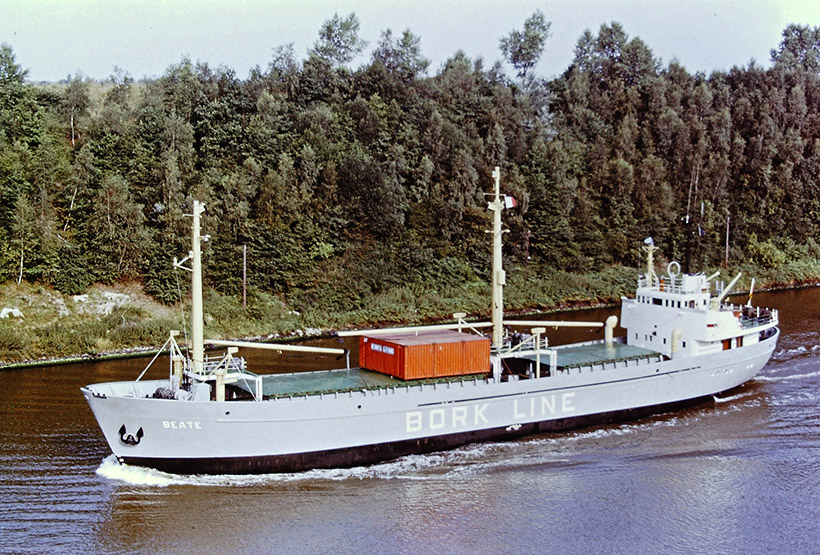 The next day, a ceremony was held in Holtenau, where Wilhelm II named it the Kaiser Wilhelm Kanal, after his grandfather, and laid the final stone. The first transatlantic sailing ship to pass through the canal was the wooden barque, Lilly, commanded by Johan Pitka; a vessel of about 390 tons that had been built in 1866, in Sunderland. She messured 127.5ft by 28.7ft, had a depth of 17.6ft and a 32-foot keel. 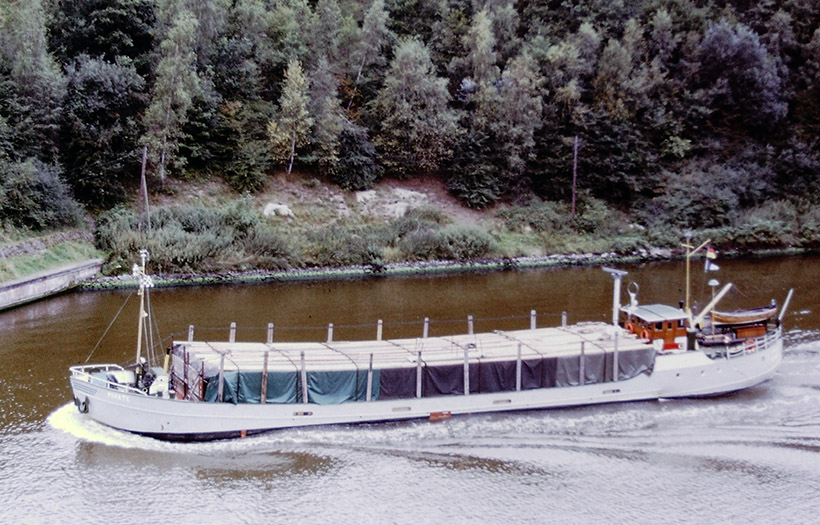 Busy waterway
The canal soon became busy and, to meet increasing traffic and the demands of the Imperial German Navy, the canal was widened between 1907 and 1914, so that a Dreadnought-sized battleship could pass through. The enlargement projects were completed by the installation of two, larger canal locks at Brunsbüttel and Holtenau. 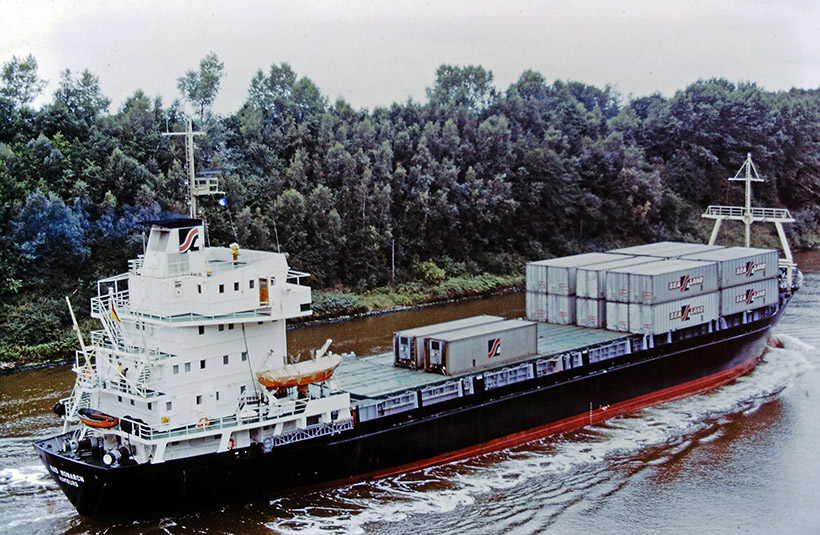 The 999gt feeder vessel, Nad Monarch, with containers as deck cargo, on August 20th, 1973, carries the funnel markings of Sea-Land Corporation; a large, American company that was a pioneer in the container business. She was built in Germany by Schiffswerke Korneuburg.

After World War I, the Treaty of Versailles required the canal to be open to vessels of commerce and of war, from any nation that was at peace with Germany, but left it under German administration. However, the United States rejected this proposal because it would have given other powers – notably Great Britain and France – an excuse to seek similar concessions on the Panama Canal. Then the German government, under Adolf Hitler, repudiated the canal’s international status in 1936. 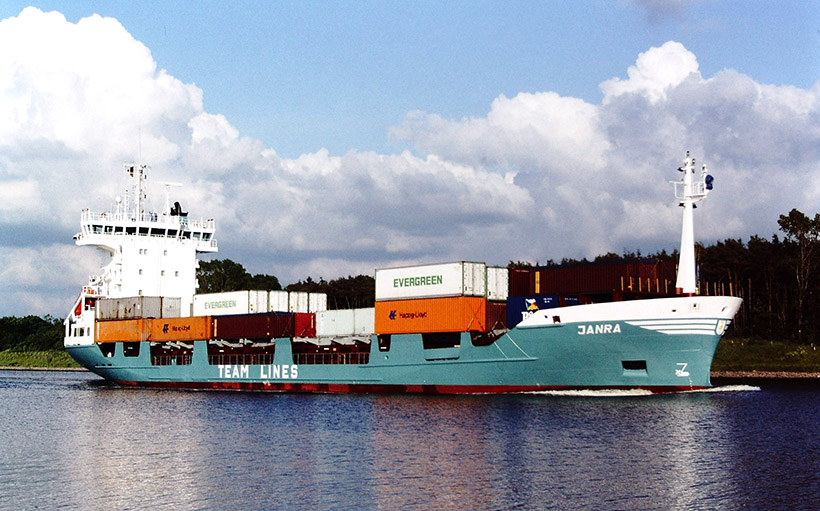 Janra, near the mid-canal city of Rendsburg, on June 11th,1995, in her first year of service, operating a container feeder service. Like many ships in this service, her accommodation block was several decks high, with a wide, fully-enclosed bridge.

After World War II, the canal was reopened to all traffic and, in 1948, the current name was adopted. The canal was partially closed in March 2013, after two lock gates failed at the western end near Brunsbüttel. Ships larger than 125m (410ft) were forced to navigate via Skagerrak, a 450km detour. The failure was blamed on neglect and a lack of funding by the Federal Government, which had been in financial dispute with the state of Schleswig-Holstein regarding the canal. 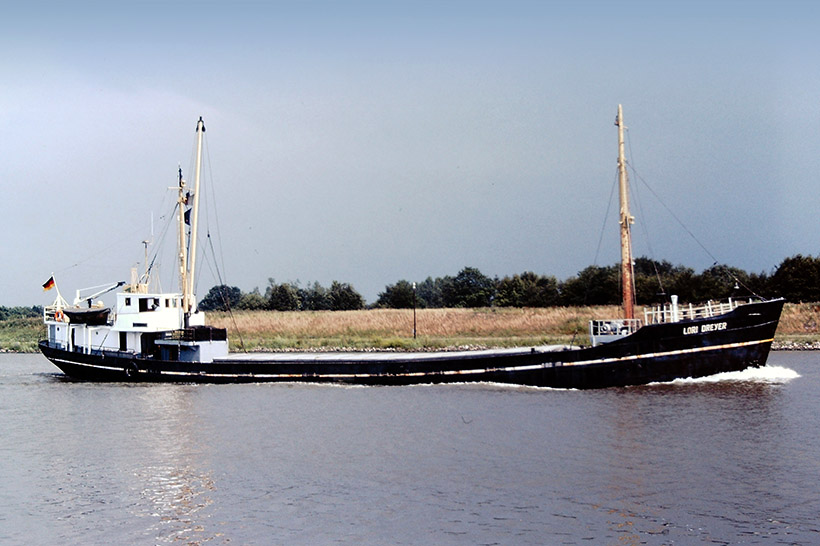 Lori Dreyer was already 64 years old when photographed on July 20th, 1977. Only 163ft long, the 1913-built ship from the yard of C Luhring, Brake, was lengthened in 1962. She is en-route to Brunsbuttel, at the North Sea end of the canal.

Traffic rules
There are traffic rules for vessels using the canal. They are each placed in one of six traffic groups, according to their dimensions. Larger ships are obliged to take pilots and specialised canal helmsmen and, in some cases, a tug. There are further regulations regarding ships passing each other. Larger ships may also be required to moor at the bollards placed at intervals along the canal, so that on-coming vessels can pass. 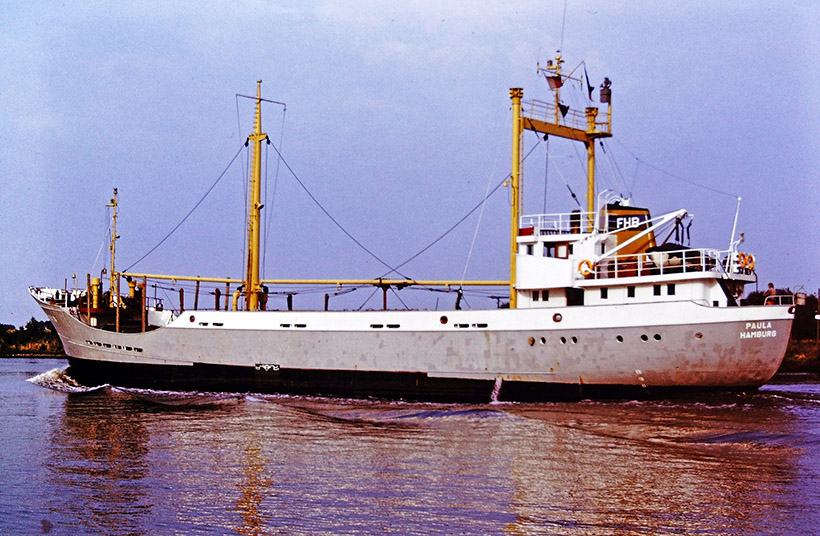 The 424gt coaster, Paula, on August 19th, 1973. She was owned by F&H Breuer, whose initials appeared on the funnel markings. She was completed in 1964 by the JJ Sietas yard near Hamburg, and was 184ft in length.

Many large, modern cruise ships cannot pass through this canal due to clearance limits under bridges. Some vessels are adapted so that they can use the waterway, such as the 1992-built SuperStar Gemini, which has special funnels and masts that can be lowered for passage. 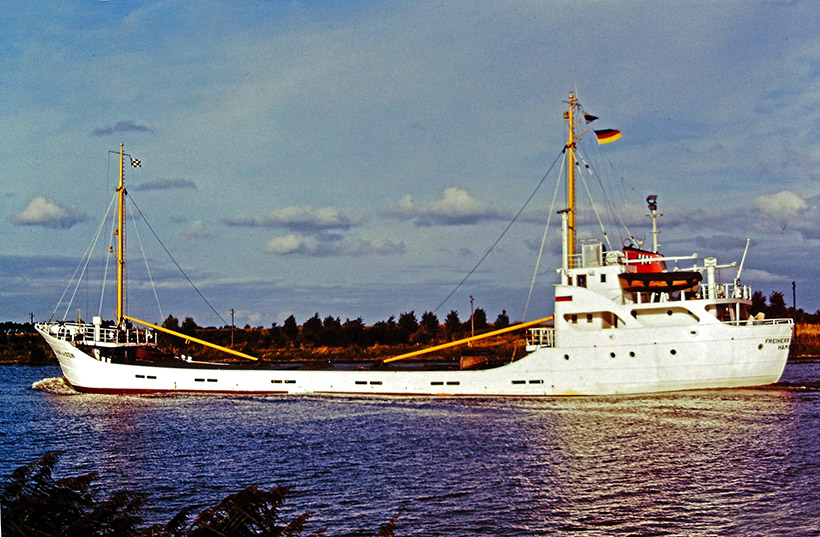 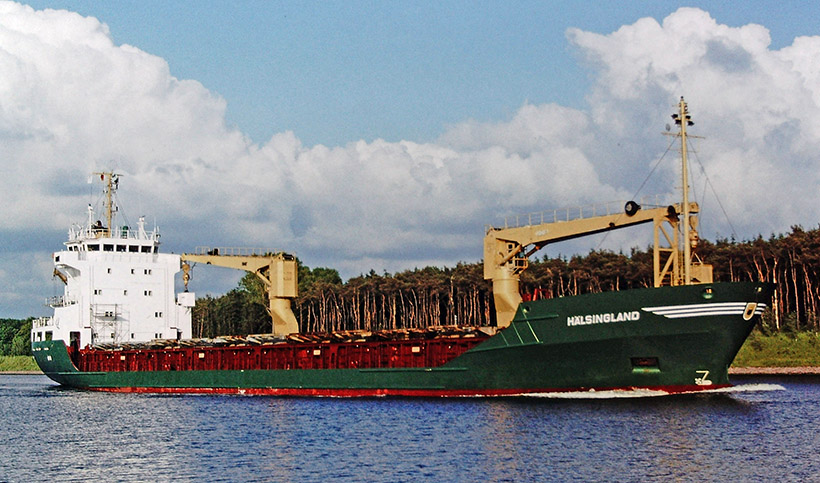 Halsingland, German-owned and registered at Hamburg, was photographed on June 11th, 1995, when she was only five years old. She measured 344ft in length, had a gross tonnage of 3,845 and was a product of the JJ Sietas shipyard. 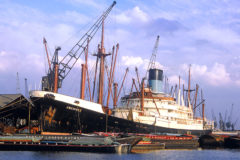 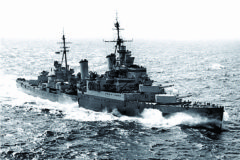 Battle of the Barents Sea