In his search for steam in Romania, Derek Rayner discovers a wealth of narrow-gauge interest in and around the Transylvanian area of Sibiu. 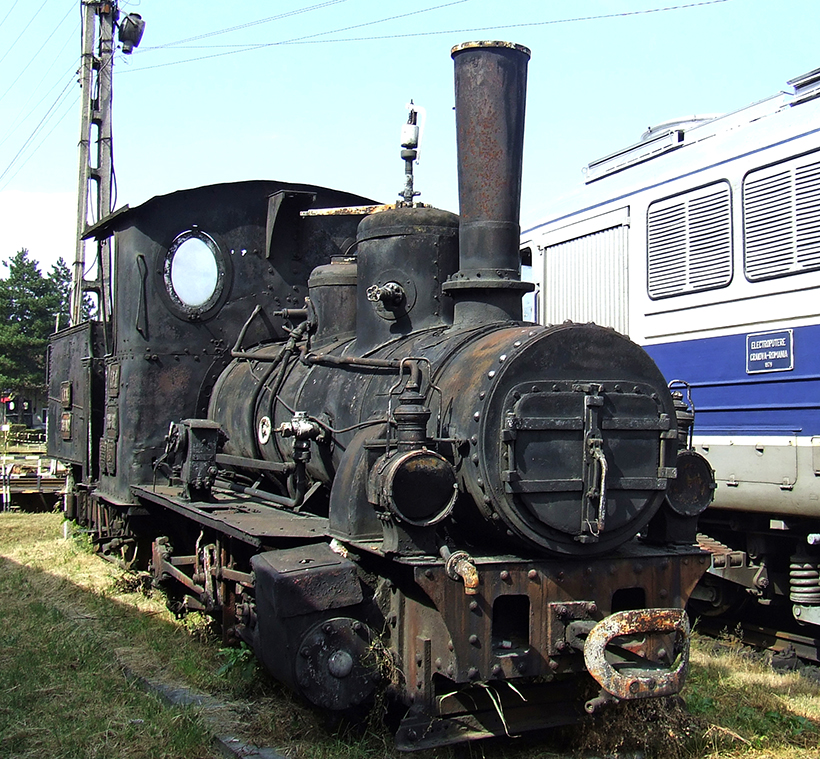 Steam in Romania: A small, narrow-gauge tender loco dating from the very early days of the Sighișoara-to-Sibiu railway. The loco is No 388.002 – constructed in 1896 by Wiener Neustädter Lokomotivfabrik in the town of the same name, now in Austria, works No 3897. Behind the steam loco is a current-day, large, Romanian-built diesel on depot for maintenance.

In the European Traction Engine Register (ETER) published in 2015, copies of which are still available, there’s a photograph of a traction engine taken at a huge, open-air museum called Astra Park, that’s just outside the historic Romanian town of Sibiu – Hermannstadt in German – and the centre of the country’s German minority since medieval times. A narrow-gauge railway tour of the country to spotlight steam in Romania, which included the marvellous and spectacular 760mm gauge Vasser Valley Forestry Railway at Vişeu de Sus detailed in OG 317, provided the opportunity of visiting the Astra Park, and taking a close look at the ‘traction engine’ there – in effect, a chain-driven, portable engine.

A bus from the town centre (No 13) to the zoo, followed by a short walk, enabled easy access to the park, which is located out past the civic cemetery, on the main road to Rășinari. 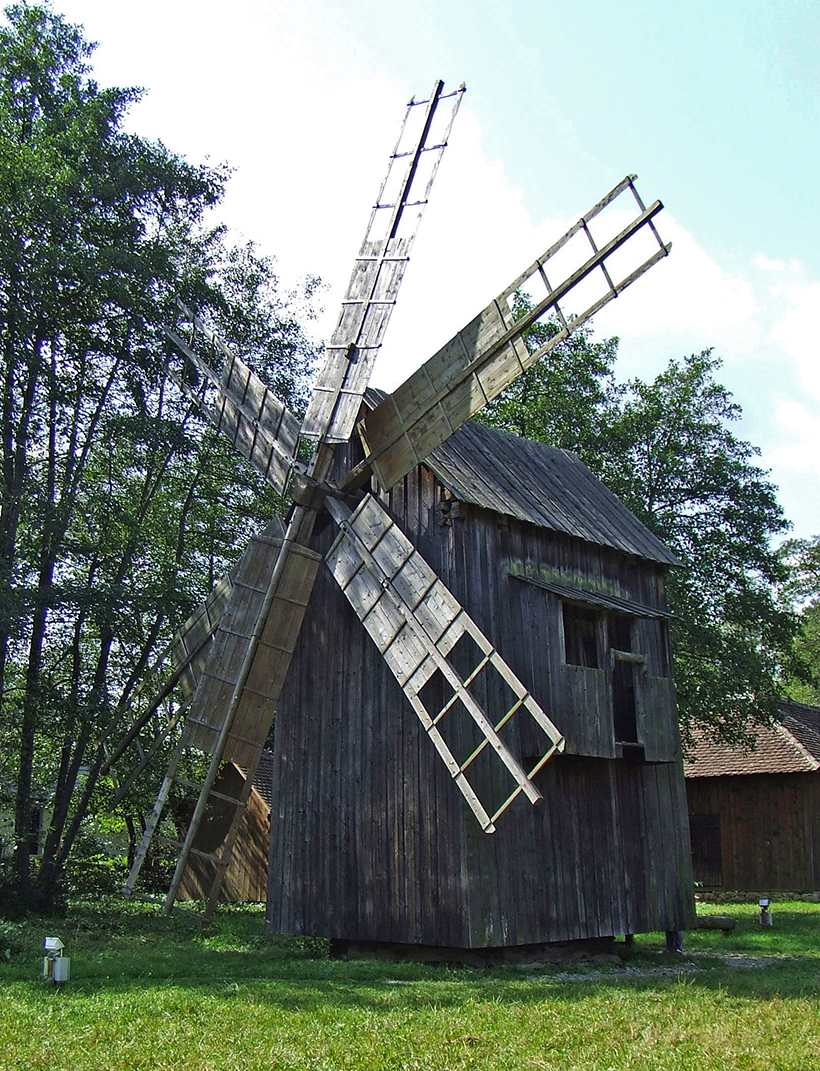 A two-storey windmill re-erected on site at Astra Park, Sibiu, having been transported from Dunavățu in Tulcea county.

Electric tramway
Interestingly, the latter part of the journey paralleled the remaining section of the Sibiu-to-Rășinari roadside electric tramway; a section of which is still operational for pre-booked groups using an electric railcar from Austria. This was originally built in 1951, for the BTB (Baselland Transport) in Switzerland. It later worked on the Attergaubahn, from Vöcklamarkt to Attersee, some 64km (40 miles) north-east of Salzburg. The present, town-end of tramway at Sibiu, was marked by the presence of an ex-Geneva tram, opposite the Hilton Hotel.

As I walked along the path, through the woods from the bus terminus towards the museum, I noticed the road was very busy and, when I crossed it towards the museum entrance, there were many cars parked along the roadside. Having purchased a park entry ticket at the desk, I also bought a map of its layout, then produced my copy of ETER and showed it to the clerk on the desk. 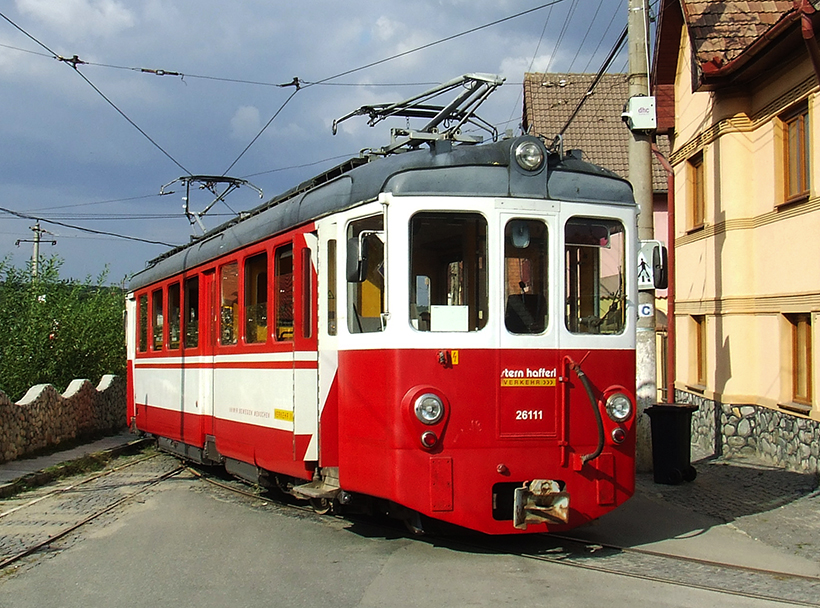 The 1951-built, ex-Austrian electric railcar No 26111 at the end of the line – the Rășinari village turning triangle.

I enquired about where I could find the pictured traction engine, only to be told: ‘Non!’ The rather dismissive nature of wave indicated one of three options; either the engine was no longer there, she didn’t understand my question or she couldn’t be bothered to tell me! I felt a wave of disappointment hit me; coming all this way only to be thwarted at the last hurdle…

However, I took stock and decided that, since I was at the museum entrance anyway, there was no point in wasting my newly-purchased entry ticket, and I might as well take a look around anyway. Studying the map, I noticed the preponderance of windmills and waterwheels marked on it, and even a threshing machine or two to be found on the far side of a lake. 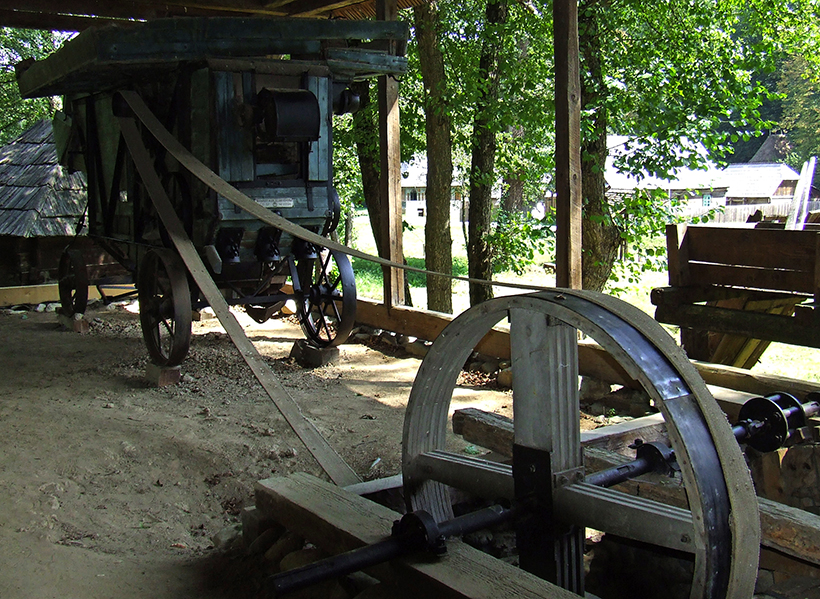 A threshing machine preserved undercover, and powered by two waterwheels, one of which is visible on the right. This was originally in Sârbi, Maramureş county.

A large crowd
Walking down a slope towards the water, I could see a choir on the other side, and that a large crowd was gathered around. I discovered that an ecclesiastical festival was in progress, and that a liturgy was taking place. This accounted for the tremendous number of cars and coaches parked outside, as well as the relatively large number of orthodox priests I’d seen in their distinctive, long, black robes.

I made my way along a pathway beside the lake towards where I thought the threshing machines would be, and the route took me past various wind and water mills. Soon, in the distance, I spotted a threshing machine and, as I got closer, could clearly make out a flywheel beyond it. 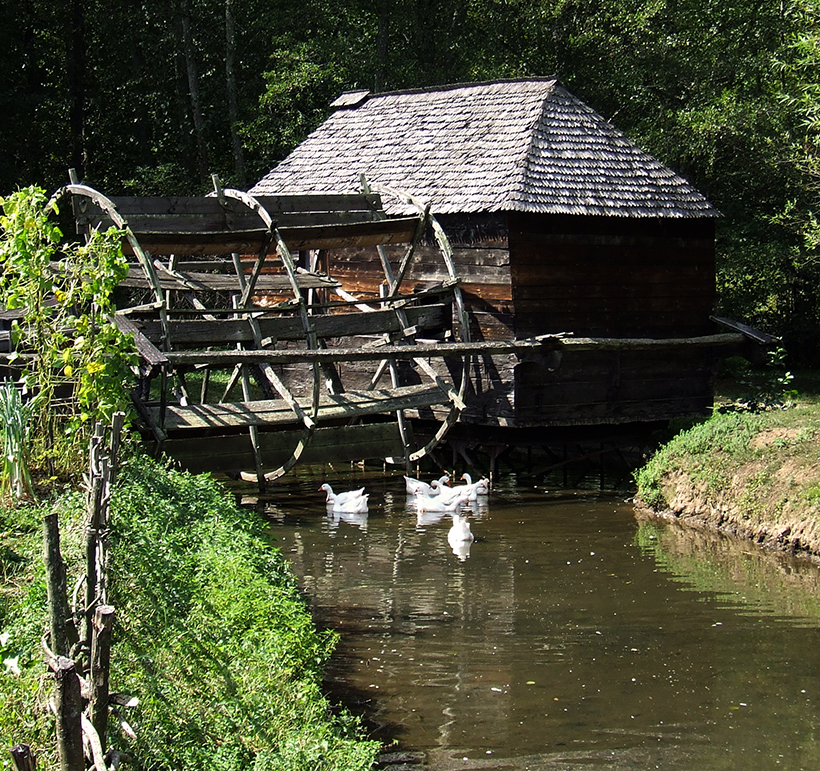 A very unusual, floating water wheel in idyllic surroundings close to the lake in Astra Park. Moored to a river bank, as the river flowed past it, the millstones inside it would be driven.

It seemed that my earlier fears were unfounded, since the engine was still at the museum after all! It was manufactured in Budapest, and the cast firehole door carried the name Budapesti M. [Magyar] Kir Allami Gépgyár (EMAG), later MAVAG. This company also made steam rollers after the Second World War. Unfortunately, no date or works number could be found on the engine, so it remains unidentified. 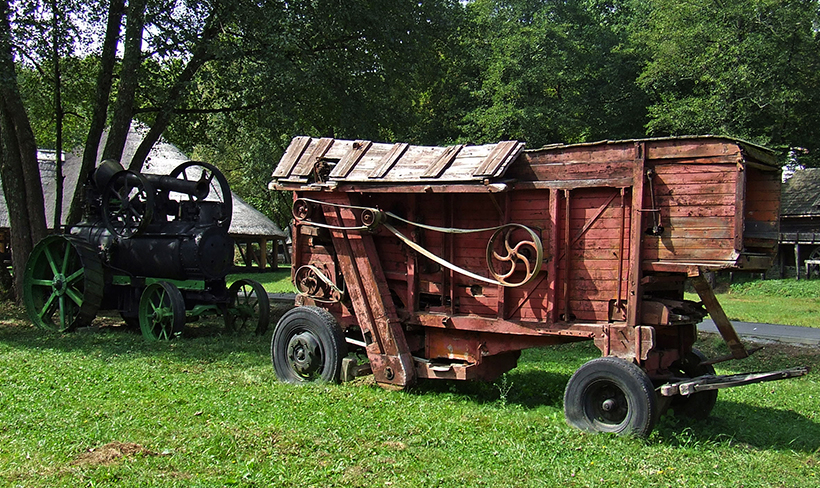 The EMAG traction engine beyond the Hoffher-Schrantz-Clayton-Shuttleworth threshing machine at the museum.

More steam was to be found elsewhere in Sibiu – not far from the Romanian national railway station – Căile Ferate Române (CFR). The small railway ‘museum’ there is part of the operational CFR maintenance depot – about 15 minutes’ walk to the south, from the station. 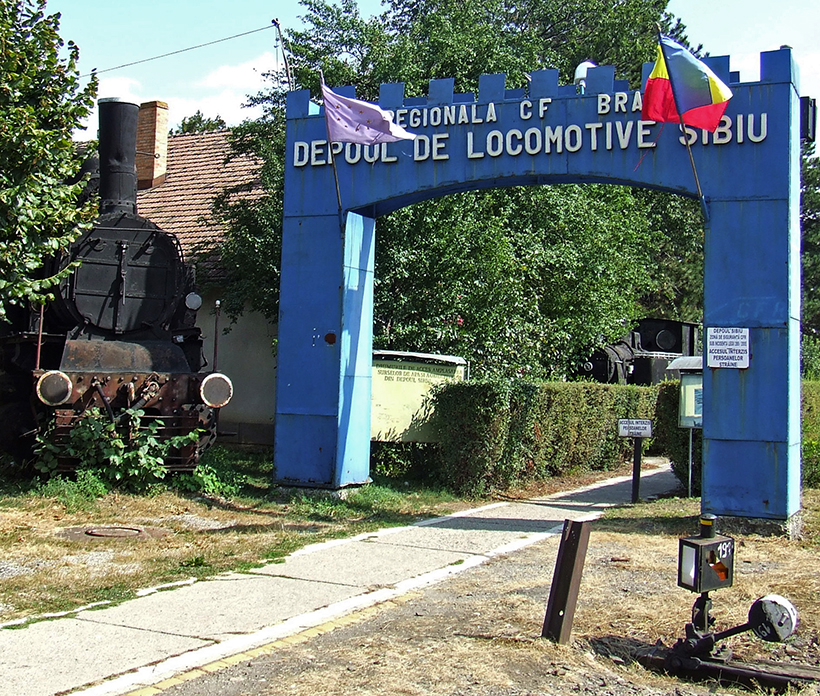 The Sibiu loco depot entrance sign with CFR 0-8-2 tank loco No 40.004 keeping it company. The sign indicates that Sibiu is in the district of Brașov – a major town some 90 miles (140 km) down the line, towards Bucharest. 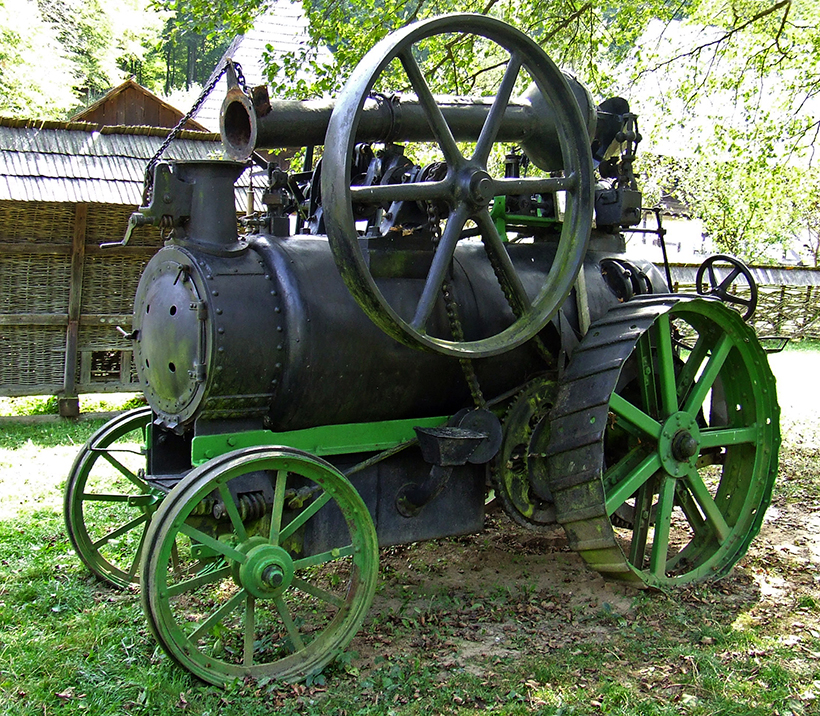 The chain drive from the crankshaft of what is essentially a portable engine to make it into a self-moving machine, can be seen in this view. 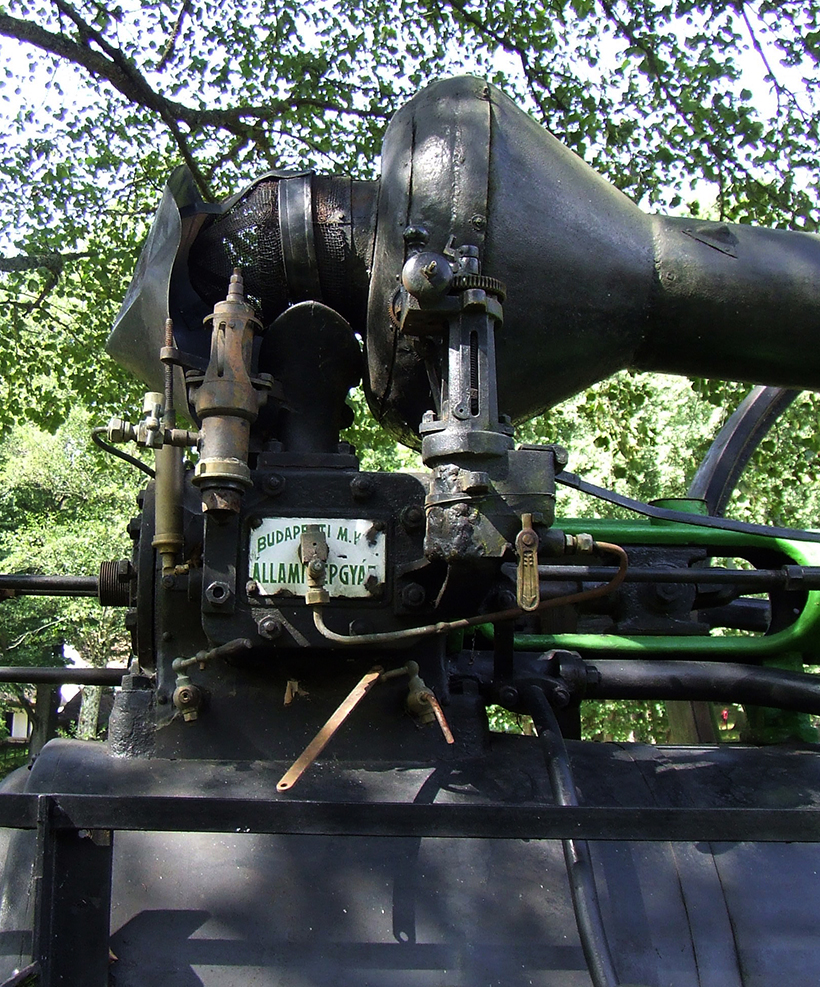 Detail of the engine’s cylinder, safety valve, two lubricators, the spark arrester at the base of the lowered chimney, plus the manufacturer’s name on the cover plate.

This museum houses a gradually deteriorating collection of six, narrow-gauge (760mm) locos, plus several standard-gauge examples around an operational turntable which serves the semi-roundhouse where main line diesel locos are housed and maintained. There’s also a steam-powered rotary snow plough and a fireless loco on show.

Hemmed-on locos
Some of the narrow-gauge locos are close to the depot’s administration block, and hemmed in now by high hedges, making photography difficult. However, while my request to one of the staff there to look around the collection was met with some indifference, there was nothing to suggest that it wasn’t permitted. As a result, I took a gentle wander around the place, to discover what was to be found there and to explore the collection. 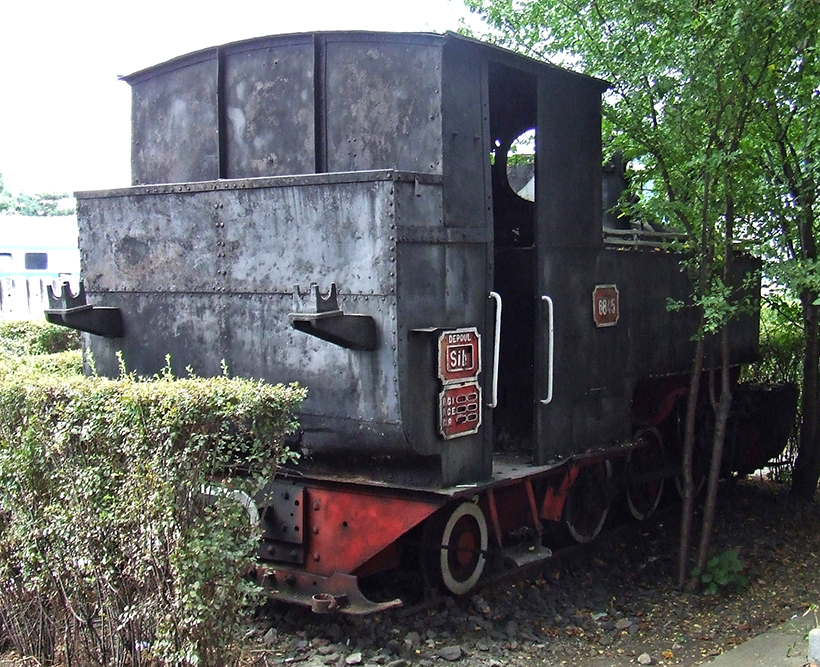 One of several narrow-gauge locos now surrounded by neatly-trimmed hedges at the Sibiu depot. Unfortunately, the hedging has now grown too high for satisfactory photographs to be achieved. This 0-6-2T was built by Borsig (No 6845) in Berlin, in 1908, for the Huszco Lozinsky & Co, of Kiev. It later came to Romania.

I was advised, by an English-speaking employee, not to venture past the semi-roundhouse, as that area was out of bounds. However, others from the group who visited the museum later, didn’t receive such a warning, and found more locos – perhaps over a dozen – round the back. They were all engulfed by trees and other vegetation. How long these locos have been there isn’t known. 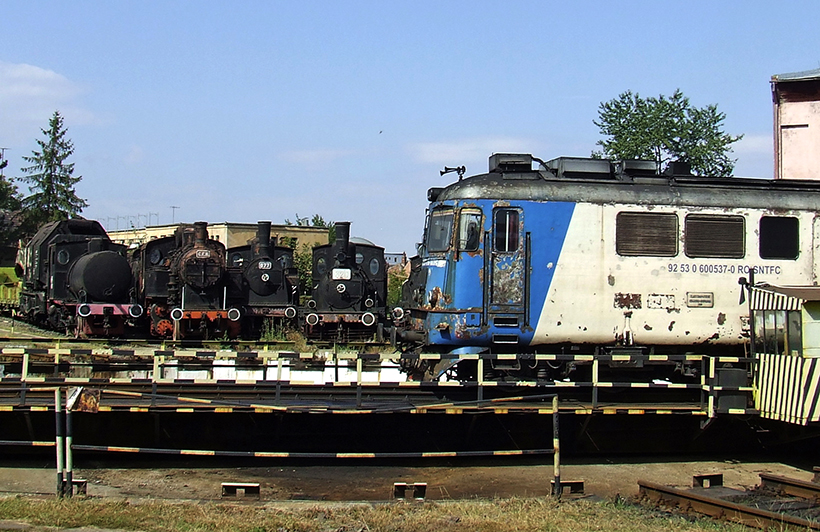 Several standard gauge steam locomotives and the depot turntable in use to release a rather scruffy-looking main line diesel loco from the maintenance depot back into traffic.

Later research indicated that, incredibly, there still over 500 steam locos to be found in various locations in Romania. Indeed, 37 of them are recorded as being in or around Sibiu, with about 18 noted as being in the museum. The rest of these could be accounted for by what’s hidden in the ‘forest’ at the rear of the semi-roundhouse.

The presence of a number of different types of narrow-gauge locos on display here is explained by the fact that, at one time, Sibiu was one of the termini for the Sibiu-to-Agnita line; this latter town being around 37 km (60 miles) away. 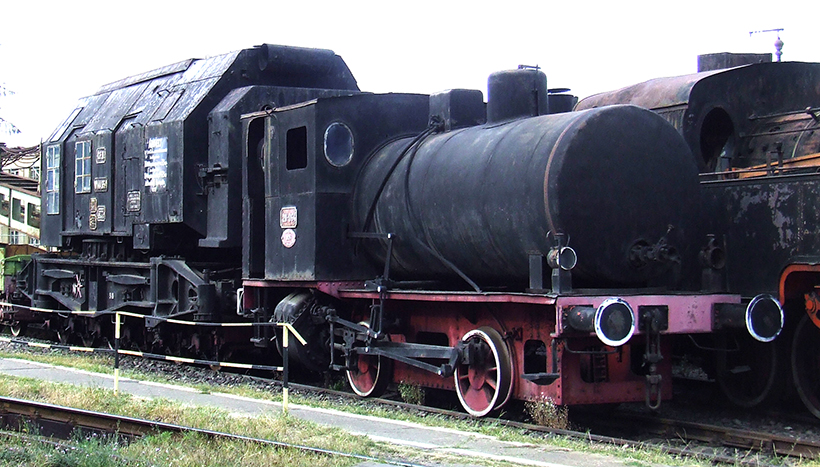 The last section of this line was closed in 2001. The line was originally built by the Sighișoara-Sibiu Local Railways Co, which started work from Sighișoara (on the main line from Teiuș to Brașov) in 1895, reaching Agnita by 1898 and then Sibiu in 1910.

A small preservation group is at work at one of the intermediate stations – Cornățel – where steam galas have been organised from time to time, with help from enthusiasts from Switzerland, the UK and elsewhere.

Narrow-gauge signs
The terminus of this narrow-gauge railway in Sibiu was just across the entrance road now used to access the station, following the construction of a long road bridge some time ago over the railway and adjacent to the station. Co-incidentally, the No.13 bus to Astra Park has its terminus at the station. Existing narrow-gauge rails and turnouts in the grass can be seen alongside this road, and there’s also a small shed – perhaps once a goods shed, which was associated with the railway as well – but, apparently, no station building. 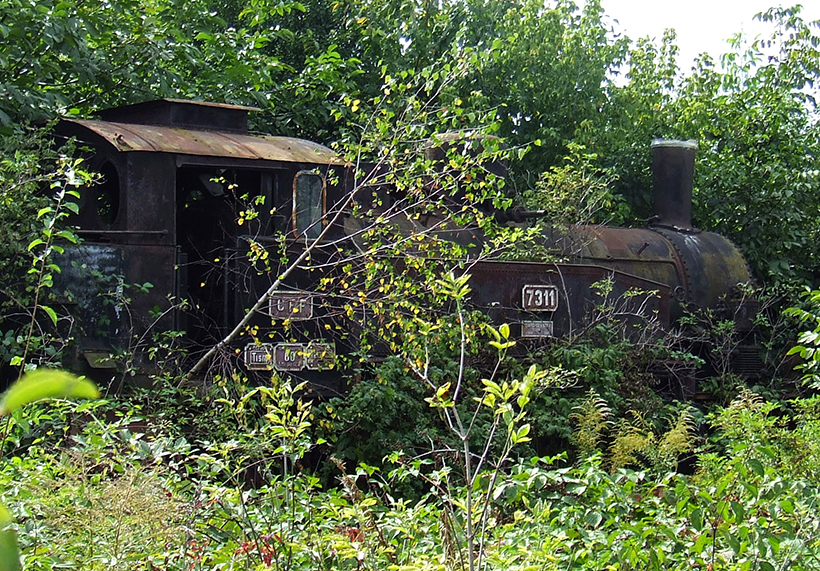 One of the undetermined number of locomotives gradually disappearing in the rapidly-growing ‘forest’ that now engulfs them in an area behind Sibiu’s railway semi-roundhouse. This is standard-gauge CFR No 7311, built by Henschel & Sohn (Kassel), No 7680 of 1906. (Pic: J Stephen Bassett)

Down the line to the south, and somewhere approximately opposite the current mainline railway depot, the abandoned narrow-gauge loco shed still stands – now derelict – but a family of travellers were living in it until relatively recent times. There’s also an appreciable amount of narrow-gauge track work being overtaken by grass, brambles and other foliage in this area.

In addition, further on and somewhat remarkably, there’s a section of narrow-gauge track which the CFR has chosen to not yet bother to remove. It’s inter-laced with one of the current standard-gauge running lines into Sibiu from the south, and is visible from a main road bridge as one heads out of town. This serves as a poignant reminder of what was once the flourishing narrow-gauge railway from Sibiu to Agnita.

Steam, therefore, still exists in the historic town of Sibiu. But, unfortunately, no longer live steam! 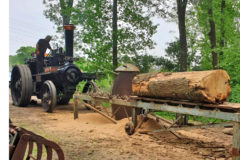 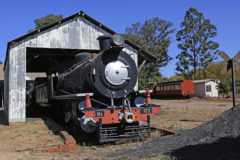