We revel in the chance to re-live Suffolk farmer, William Slater’s silage-making secrets from the 1960s, in glorious technicolour! 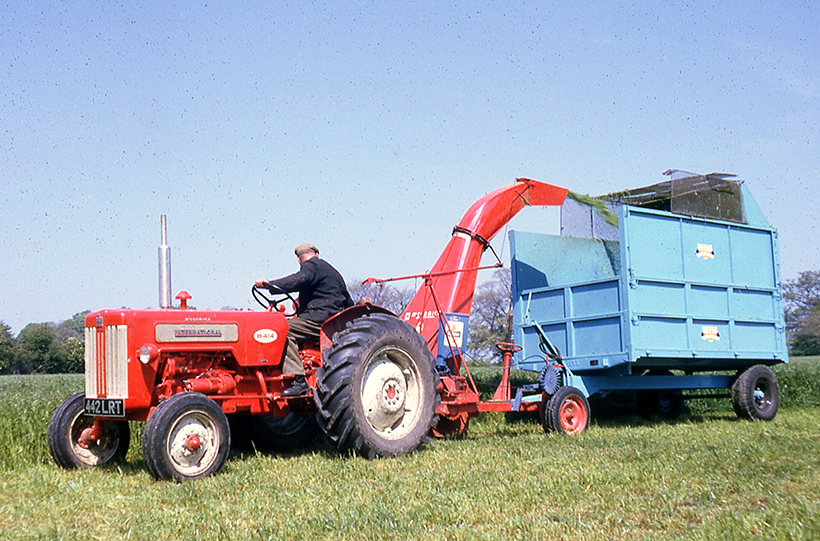 Silage secrets from the ‘60s:  These photographs were taken in the early 1960s, on William Slater’s farm in Suffolk. This one shows and show an IH B-414, IH Gloster B-20-2 MkII forage harvester and a Weeks trailer at work.

Silage has been replacing hay-making on British farms since WW2, becoming the main form of conserving grass to produce feed for the over-wintering of cattle. That’s not to say that hay-making has disappeared, but silage has – without doubt – become the most common method, and the one used on the largest dairy farms, in particular.

The methods and machinery used to produce silage have changed quite a bit over the decades, from originally being collected using buck rakes and green crop loaders, to forage harvester feeder wagons and, most recently, by big bales.

By digging into the archives, the story of silage harvesting past and present reveals not only the machinery and techniques that once were used, but also a fascinating variety of tractors used to carry out the task.

A forgotten marque
It’s the early 1960s and William Slater, a tenant farmer on a large, Suffolk estate, decided to take some photographs of his silage-harvesting operation, that had just been bolstered by the addition of a brand-new forage harvester and tractor. This was lucky for us, as he managed to record a scene that would otherwise have been forgotten. The crop is a rather lush-looking field of Italian ryegrass, that was grown in rotation on some of the arable fields to produce a nutritious green crop for silage-making. 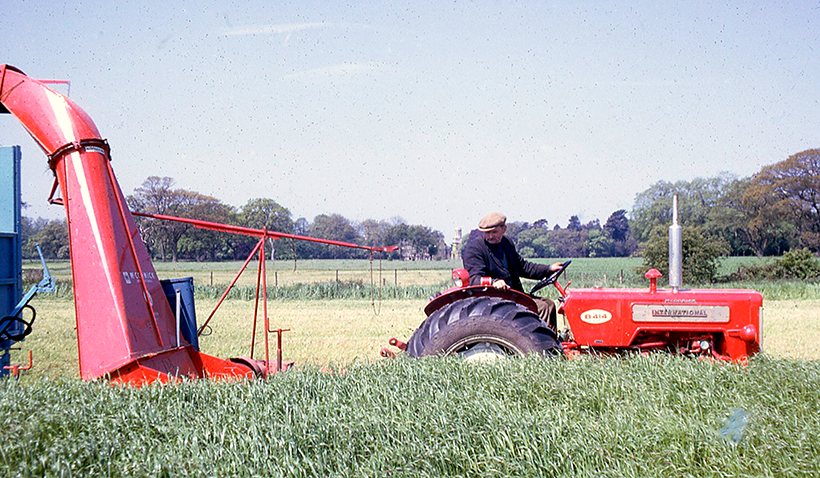 With only 40hp on tap, the B-414 must have been a bit underpowered for this job, especially when the crop was particularly thick or damp. The height of the ryegrass is evident here, but the tractor and forager seem to be coping pretty easily – even if forward speed would have been limited.

This 40hp tractor would seem to be perhaps slightly underpowered for hauling all of that equipment, as well as powering the forage harvester via the power take-off shaft, but tractors of this size were often used for such tasks. In a thick or wet crop, bottom gear may have been the only option to keep moving, but the tractor seems to be coping when these photographs were taken – which is a real testament to the gutsiness of the little B-414.

The grass is being cut directly by the forage harvester and then chopped and blown into the trailer being pulled behind, as was the common way for silage-making in the 1950s and 1960s, before the advent of the precision-chop machines that picked up the grass from a swath left by a mower.

Produced by Gloster
The IH forage harvester was actually produced for the firm by Gloster, and was known as the IH B-20-2 MkII; this being the second version of such machines, and offset to the tractor so that the tractor didn’t have to run on the unharvested crop. The B 20-1 was an inline machine not offering the latter benefit. The MkII version of the harvester was much more streamlined – the earlier version being more angular in design. A swivelling discharge chute was an optional extra.

International Harvester had been involved with silage equipment in the UK from 1949, when it began producing the International BR green crop loader at its factory in Doncaster, followed by a long line of finger-bar mowers and balers. It was in North America, though, that forage harvesters really took off first, and American-built McCormick International forage harvesters were among several American marques that were brought over to Britain during the mid-1940s.

They enjoyed some success, before IH moved on to the direct-cut machines supplied by Gloster. By this time, IH was competing with some very strong suppliers in this sector, including Lundell and Kidd. This meant that the IH Gloster machines were never that common.

In the late 1960s and early ’70s, IH offered the North American-built precision chop 550 model forage harvester but, once again, faced stiff competition from several other manufacturers in the UK marketplace.

The Red fleet
Back to Suffolk in the 1960s, and the Slater’s IH Gloster forage harvester was backed up by a fleet of trailers and two tractors to do the haulage; one a venerable IH Farmall M and the other, an IH B-250. The Weeks trailer that features mostly in the photographs here also appears to be a brand-new item, and is also fitted with its own silage extensions to increase carrying capacity. 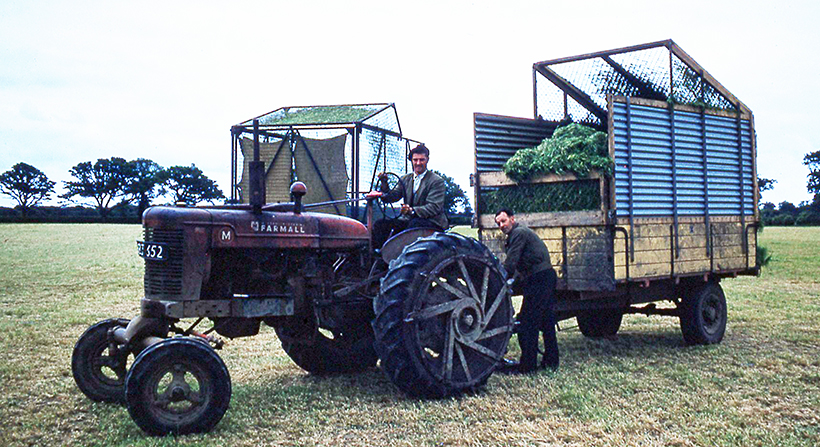 The farm’s venerable Farmall M was called in to assist with hauling the silage crop, and is seen here hooking up to an Edmunds trailer, ready to take the load of grass back to the clamp.

The other trailers in use – also three-tonners – were a motley bunch, often with silage extensions fabricated by the local village blacksmith, and included an Edmunds example built in the Suffolk town of Bury St. Edmunds, and fitted with an ex-military truck axle. Another appears to be an OB Wright example built in Dereham, Norfolk, that were, for many years, very popular in this area of north-east Suffolk. 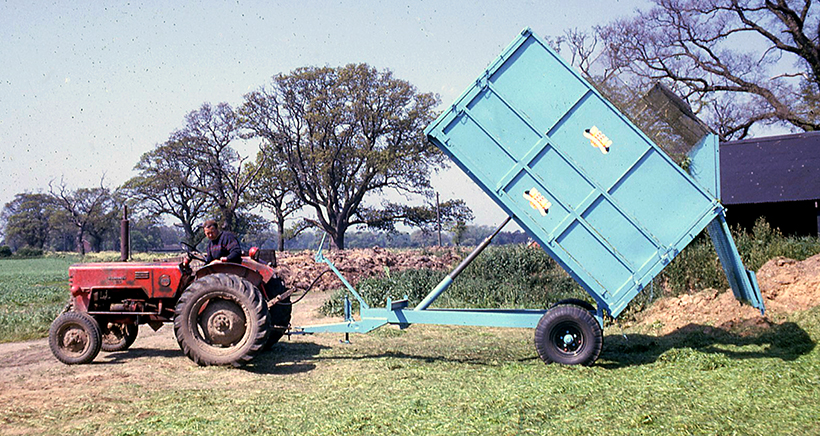 The main tractor used for haulage was the little B-250, seen here tipping the brand-new Weeks trailer at the farm, where the clamp was being made.

While harvesting was in progress, a silage additive was added to the crop via a Kylator applicator that was fitted to the forage harvester, and metered by means of a star wheel above one of the forager’s rear wheels. This additive had a high acid content, and could be very corrosive on all of the machinery used in the operation.

When harvesting, the trailers were drawn behind the forage harvester itself by means of a manually-operated trailer pick-up hitch; a system that worked well, but did mean a lot of getting on and off the tractor for the operator. The tractors would then haul the full trailers back to the farm, where the grass would be made into a clamp, to mature into silage for the winter. 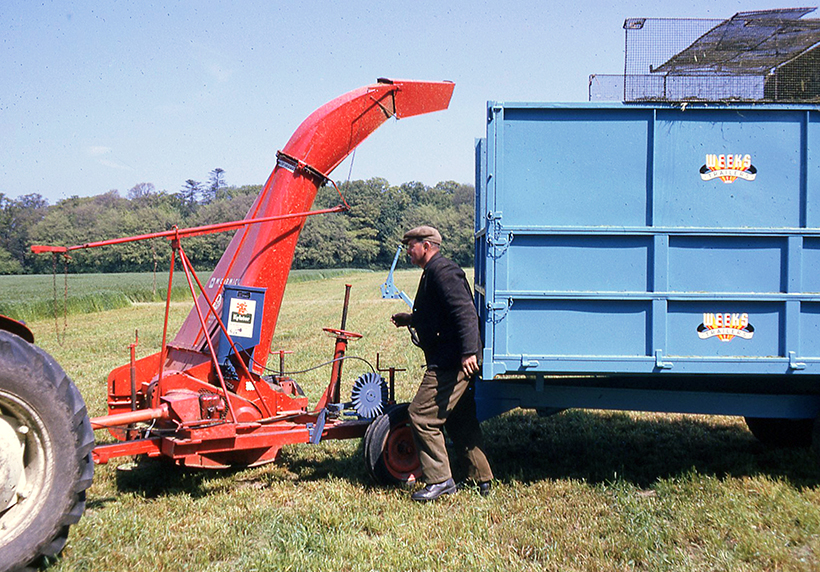 Heavyweight machine
The farm’s heaviest tractor, an IH Super BWD-6, was in charge of clamping the grass, with what appears to be a Patterson buckrake, in an open position in the stackyard making a ‘wedge’, rather than putting it in a barn or pit.

The wedge technique was not as efficient at making good silage as a pit and also had several drawbacks, most notably safety of working at height on an unsupported crop as it got ever larger. There was also a lot more waste with this method and, because the grass wasn’t allowed to wilt before harvest, the end product produced a great deal of effluent run-off as the grass slowly fermented. Despite this, it seems the Slater family was more than happy to produce silage this way, and it must have worked well enough. 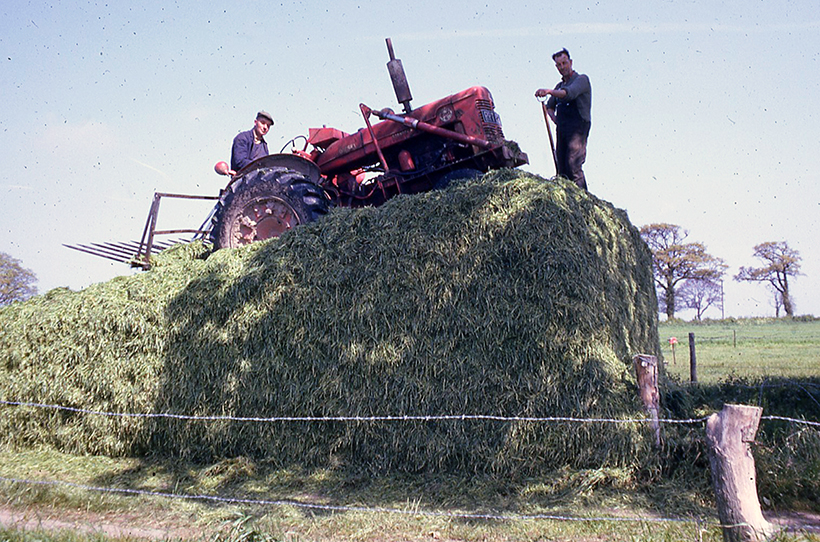 The Super BWD-6 was using what looks like a Patterson buckrake to build the clamp. The ‘wedge-type’ clamp would end up at quite a height above the ground, and certainly wouldn’t meet today’s Health & Safety requirements! Nevertheless, this technique represented a pretty common and cheap method used during the 1950s, in particular.

When all of the grass had been harvested, the clamp would be covered with a polythene sheet to keep the air out, and encourage the silage fermentation process to carry out its task of producing high-quality animal feed in the shape of sweet-smelling silage.

The IH Gloster forage harvester was used for many years in Suffolk, and proved to be very reliable and, thanks to these superb photographs, we’ve been given the chance to relive those days from more than 50 years ago.

Special thanks to the Slater family, and Graham Richmond, for the use of the photographs and the fascinating details of the background behind them. 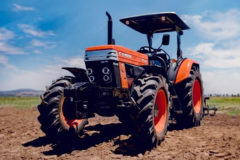 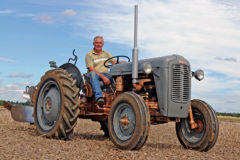