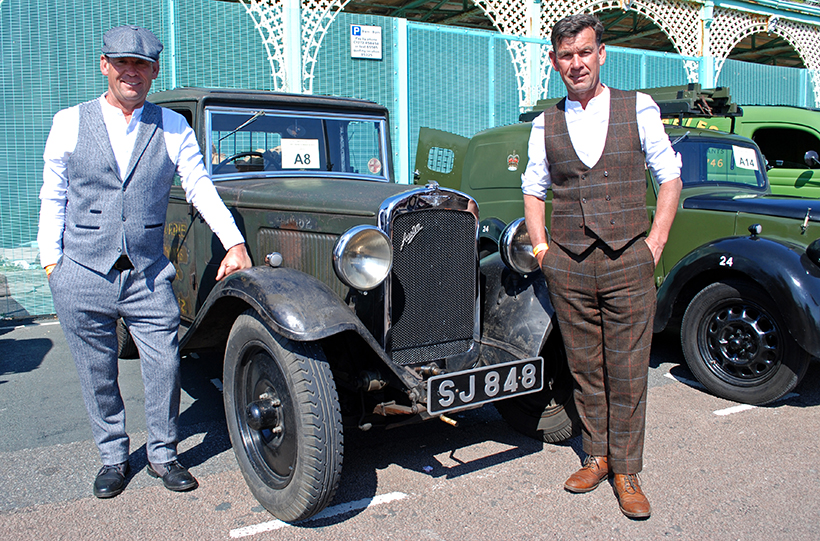 Born in November 1866, Herbert Austin established his car plant in Longbridge in 1905, with vehicle production commencing the following year. During WW1, the factory was turned over to the production of armaments for the war effort, but there were not enough houses to accommodate the workers needed, whose numbers swelled from 2,500 employees in 1914 to 22,000 by 1918.

Herbert Austin thus imported – and had assembled – prefabricated cedar wood bungalows from Michigan, USA, in 1916 to create Austin Village. Initially, these buildings only had a license for 15 years, but this kept being renewed and, indeed, they still survive today, having achieved conservation area status in 1997. 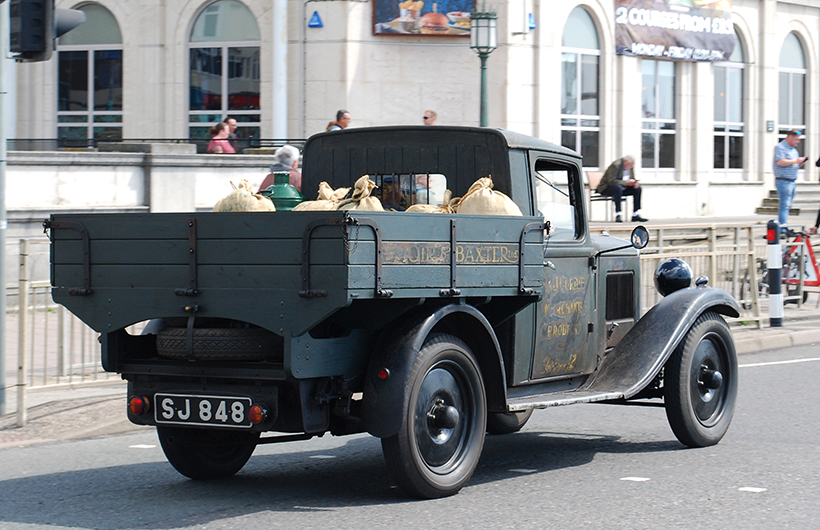 From the rear – some of the wooden load-bed has been renewed, but it all looks very right and original.

One-model approach
In 1919, following Ford’s lead, Austin adopted a one-model policy, in the form of the Austin 20, with a 3.6-litre engine. Unlike the Model T, however, this proved to be too large to be a strong seller, particularly with the government’s punitive Horsepower Tax. This, together with the financial aftermath of the Great War which led to the depression of 1921, pushed Austin into receivership.

Forced to respond, Austin introduced a scaled-down car, the Austin 12, in 1922. Gaining a reputation for being solid and reliable, variants of the 12 remained in production until 1935. This measure, along with the famous ‘Baby Austin’ Seven of 1922, put the company back on to a stable financial footing. Austin’s co-directors opposed the new small car, so Herbert ended up funding the Seven’s development himself. By 1926, it became the firm’s most popular model, outselling the 12, thus vindicating his decision. Herbert Austin was knighted in 1917, and became Lord Austin of Longbridge in 1936. 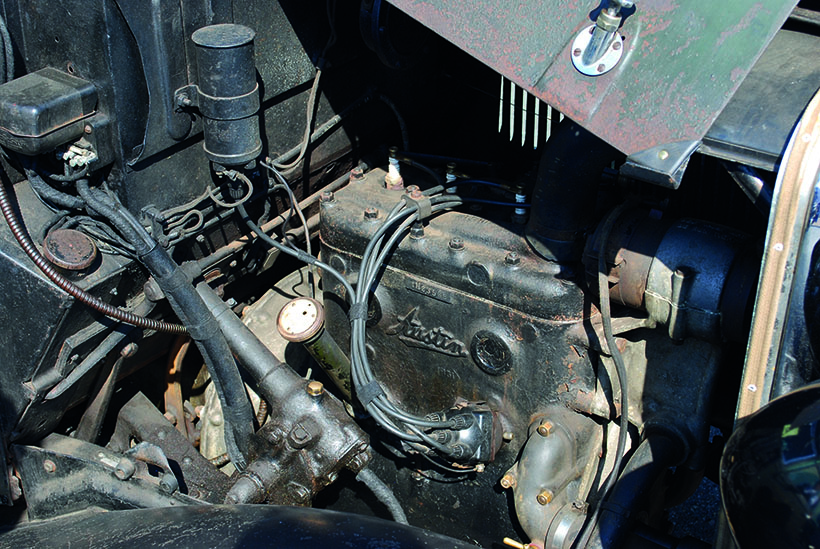 Austins were dependable but conservative, with all cars built before the end of the Second World War having separate chassis, side-valve engines, mechanical brakes, beam axles and leaf springs.

Some mod cons!
An electric wiper was fitted to the driver’s side only but, of course, no windscreen washers. The windscreen could be opened for ventilation, and an eight-gallon petrol tank was provided. Modified versions of the Austin 12/4 chassis formed the basis of the popular Austin ‘High-Lot’ and, later, the ‘Low-Loader’ taxis. 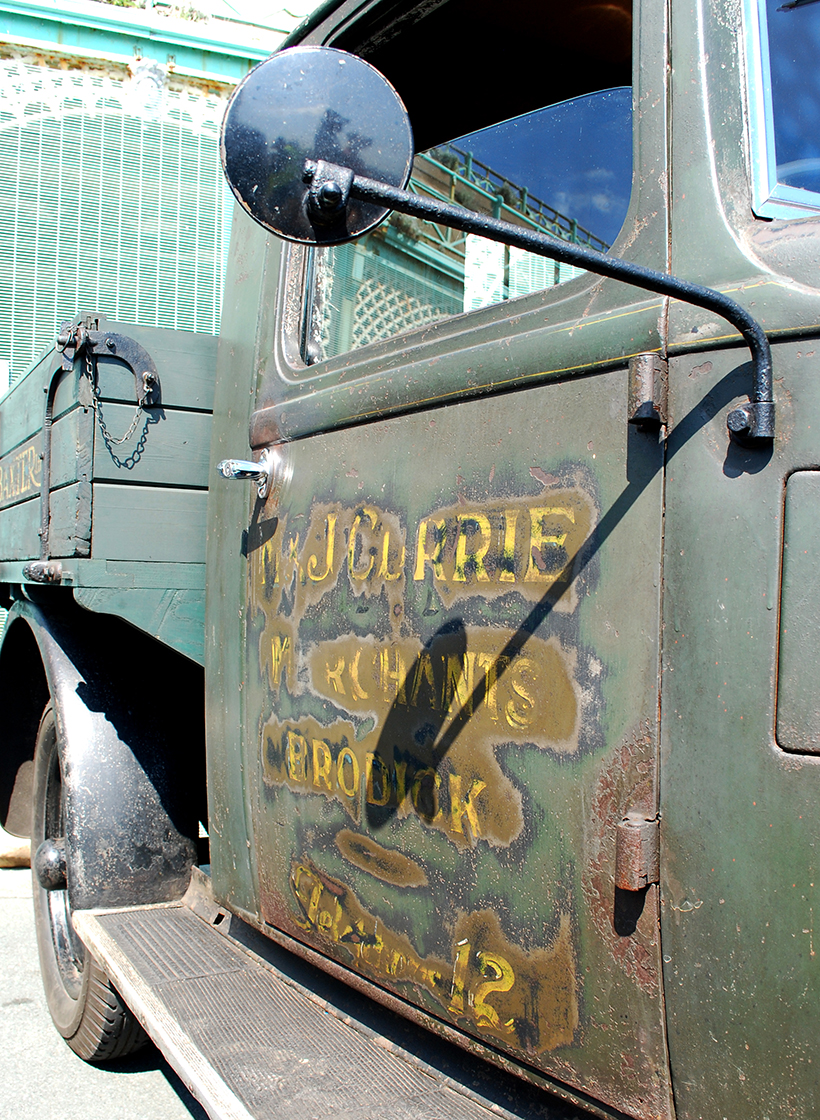 No fake or recreated patina here; this is the real deal! Original owner’s signwriting remains extant on the offside cab door.

Between 1922 and 1938, Austin didn’t build any large commercials, only light vans and pick-ups based on car chassis. One such is this 1935 Austin Light 12/4 Pick-up owned by twins Roy and Ian Sutton, from Woking. Just 48 were produced, this being No. 24. They were converted new in the Austin factory, where the wire wheels that would have been fitted to the Austin 12/4 car were substituted for the solid disc wheels that the pick-up still wears.

The first owners were Mary and Janet Currie, who owned a greengrocer’s shop in Brodick on the Isle of Arran, in Scotland. Signwriting, proclaiming ‘M&J Currie, Merchants, Brodick, Telephone 12’ was applied and remains visible today. They used the Austin to deliver dry goods around the island. In 1939 the truck was commandeered by the War Department for army use. The original census number L4411082 can also still be seen painted on the side of the bonnet.

After the war, the Austin passed through an auction and was bought by Moir & Baxter’s garage, an Austin dealership in Edinburgh. Its name also remains, on the rear bodywork. In 1958, Mr Moir put the vehicle into a barn, and it was abandoned and forgotten about for 30 years, until it was discovered on a smallholding on the East Coast of Scotland in 1988, still with only around 35,000 miles on the clock. 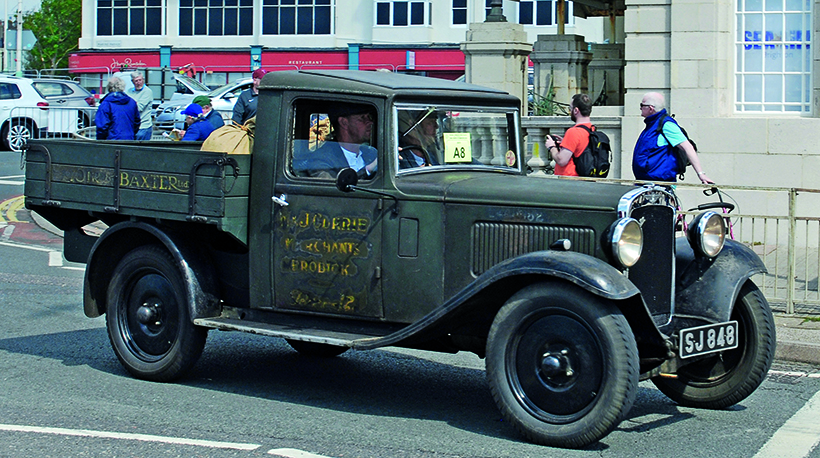 Nearly there – just crossing on to Madeira Drive in Brighton, at the end of the 2019 HCVS run. Hopefully the 2021 event will go ahead…

Back on the road
DVLA records indicate that it went back on the road in December 1992 and, fortunately, it was possible to get its original registration, SJ 848, reallocated, even though this hadn’t been registered on the system when the records were computerised.

The Sutton brothers purchased the truck in October 2018, from an auction in Duxford. By the time of the 2019 HCVS London to Brighton Run, the Austin was showing 36,900 miles, so had only covered 2,000 miles in the previous 30 years! A further 1,700 miles have been added since then.

The WD number stencilled on the bonnet dates from WW2, when this Austin was requisitioned for military service.

The previous owner of the Austin 12/4 Pick-up replaced the ash of the pick-up’s body, but retained some of the original panels, complete with the signwriting. From the cab forward, nothing that you see has been changed since just after WW2. Prior to the auction, the original, 1,535cc engine was reconditioned, a new exhaust, clutch and radiator matrix were fitted, and the Austin was rewired with new lamps fitted, including flashing indicators concealed within the sidelights. The previous owner fitted a new radiator core, but the chrome surround is the original and just needed a polish.

“Initially, when Ian first mentioned it, I was put off by the age of the truck, and the expectation that it would be difficult to get hold of parts for a vehicle like this, as well as the fact that it had spent its whole life in Scotland. I thought it would be all rusted out,” explains Roy. 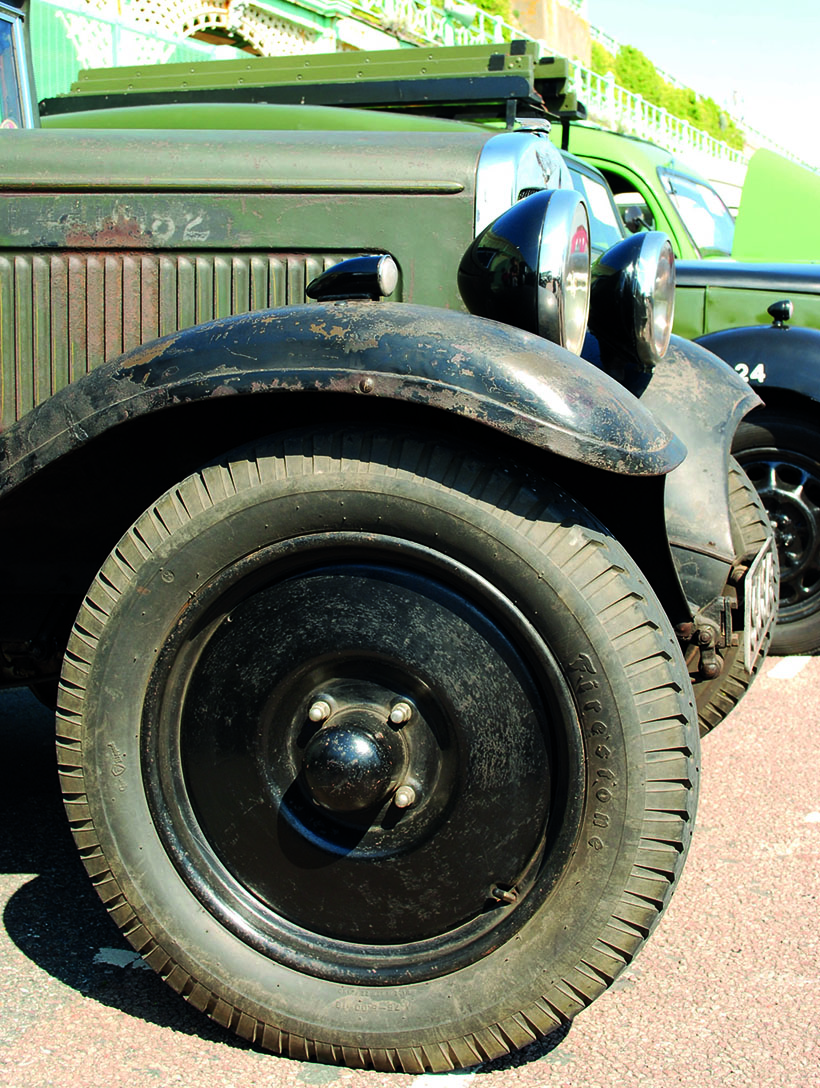 The factory conversion from car to pick-up including the fitting of solid, disc wheels in place of the original wire-spoked type.

Love at first sight!
“However, when we went to the pre-auction viewing and saw it, we knew we had to have it. We couldn’t attend the auction itself, though, so had to get one of our staff members to follow it online. Ian and I were both actually on a golf course at the time, playing in a competition that we were committed to, and ended up buying the truck during a brief pause in the proceedings while on the 15th hole!” As one-time president of North Worcestershire Golf Club, Herbert Austin would surely have approved.

When they went to collect the Austin, after 15 minutes of fettling it was ready to be driven down the road. The brothers haven’t needed to do a great deal of work to it. They replaced the top and bottom radiator hoses, points and condenser, re-lined the brakes and fitted new shoes, replaced the tyres – including new inner tubes on the rear wheels – and carried out an oil change. That was it. 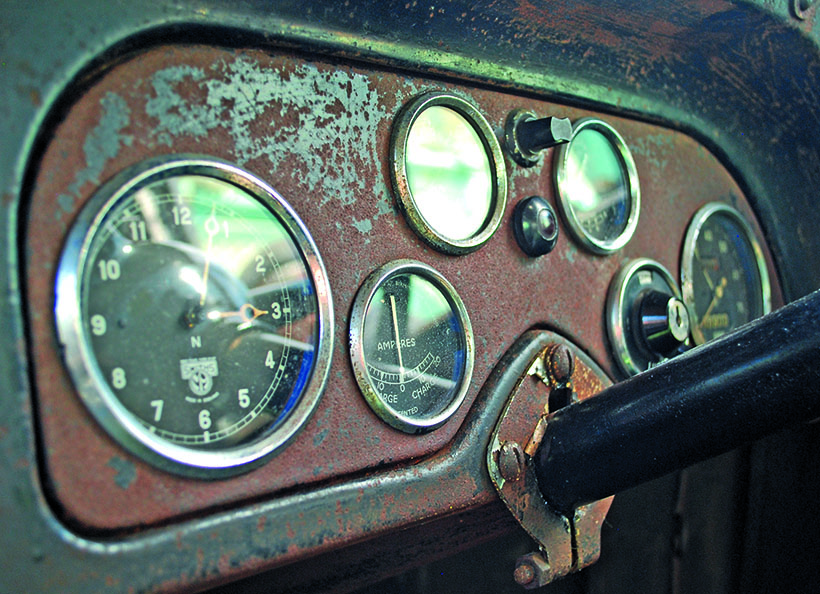 Genuine patina of age extends to the instrument panel inside. The mileometer still shows just 36,000 from new, which is probably genuine.

“Parts like brake shoes, tyres, hoses, points and condenser all turned out to be readily available,” notes Roy. “It drives very nicely, is happy cruising at about 43mph, and the engine is surprisingly quiet. It’s very torquey, although it doesn’t really like hills. The brakes are good – you can lock-up all four wheels. The steering is light and you don’t feel at all unsafe. It’s a solid truck, made of good quality metal with sound engineering. Even the roof doesn’t leak.”

Austin Twelves are catered for by the Vintage Austin Register, which has been going since 1958, when it was called the Vintage Austin 12/4 Register, before it expanded to include other pre-war Austin models. The club has its own spares department that can supply the most-needed parts, as well as offering technical advice. It also maintains an archive of period literature, sales brochures, handbooks and magazines.

The Sutton brothers got into classic cars after giving up racing. “I first bought an old Jag from a customer. It was one of the last Mk2s which had never been welded,” recalls Roy. “Then I bought a Mk1 Escort at auction, followed by a Fiat 500 Abarth. We like showing and driving them.”

So, what next for this tme-warp Austin? “We’re planning to drive it up to Arran, and back to the shop where it started out,” Ian told me. “The shop is still there, but it’s now a Co-Op.” The idea was to do that this September but, needless to say, that didn’t happen. Our plans are all up in the air now, so the trip might have to wait until 2021.

“We’ll never sell it, though,” notes Roy. So, although it was once abandoned for three decades, the future for this rare, 85-year-old survivor, now seems assured. 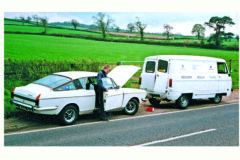 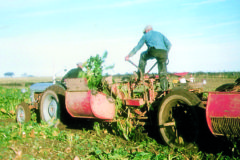 Beet farming of yesteryear in Scotland