Peter Small takes a nostalgic look back at the beet farming of yesteryear in the fields of Fife, Scotland. 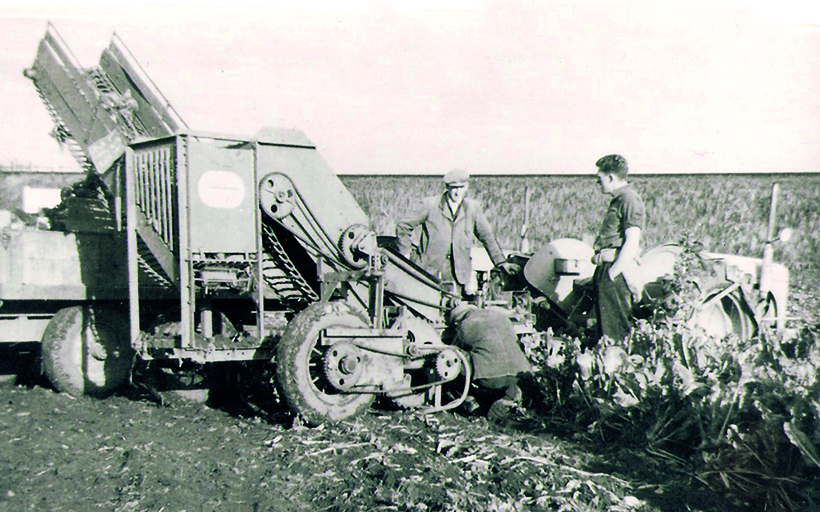 Beet farming of yesteryear: A Ferguson tractor, complete with wheel girdles, operates a John Salmon beet harvester, which is being adjusted at Grange Farm in Kirkcaldy, in 1958.

Sugar beet crops have returned to the fields of Fife for the first time since the early 1970s, when Scotland’s only beet factory at Cupar closed in early 1972. However, this crop isn’t destined for human consumption, but will be used as an energy crop to feed anaerobic digesters that help to produce electricity. There’s also been a substantial acreage of fodder beet grown successfully for livestock feed since the 1980s.

Investigations are to be carried out into building a new refining plant to process the crop. This is proposed to be on a much smaller scale than before, with the Fife and Tayside area again being in the frame as a location for both plant and crop.

Beet factory
If all goes to plan, then there might just be enough older farmers around who could offer advice on the husbandry of the crop. Scottish sugar beet growing began in earnest in 1926, when the new factory at Cupar was opened by the Anglo Scottish Beet Company. Many farmers in Scotland were very experienced in growing root crops such as turnips, swedes and mangolds as livestock feeds and, initially, those trying beet for the first time used these tried and tested methods to grow it. 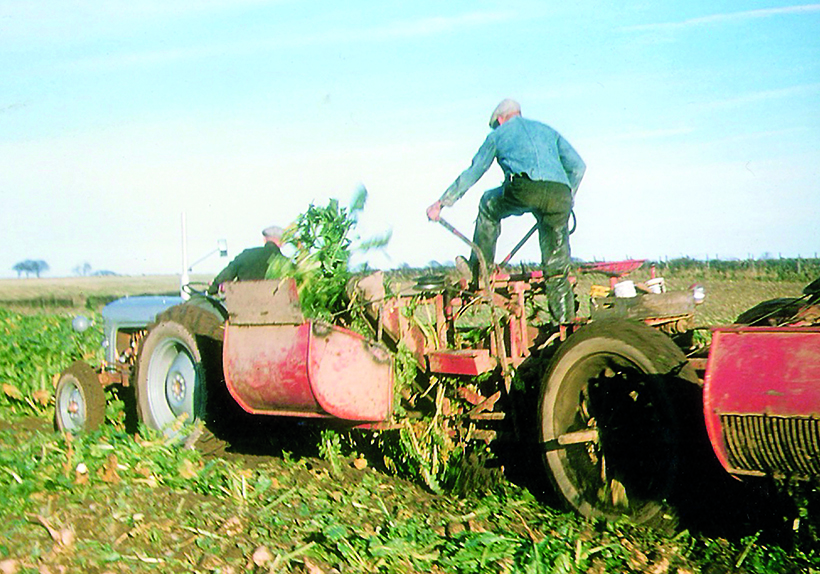 A Ferguson FE 35 tractor and Catchpole beet harvester working in Angus, sometime during the late 1950s.

They used existing machinery for these root crops, too, such as drill ploughs, drill rollers and turnip drills to sow the crop, then hoes, shims and cultivators to clean them during the summer months. However, the crop was harvested by hand, just as turnips were in the autumn and winter months.

Viability struggles
Throughout its history, the Cupar factory struggled to get enough tonnage to make it viable, and only with the strict orders during the Second World War did beet growing increase enough to satisfy factory capacity. Many farmers didn’t take to the crop as it interfered with their set rotations, or put pressure on the labour resources at busy times. Also, many didn’t like how the late harvesting operations damaged the soil in wet seasons.

Those farmers who took to beet seriously, integrated it into rotations and labour availability and to reduce the damage to the soil. Ironically, just as the factory closed, monogerm seed – which negated the need for hand-singling, chemical weed control and better machinery – arrived, which would have made growing sugar beet much easier. Whether it would have seen a big enough increase in the acreage of beet grown to save the Cupar factory, is open to debate. 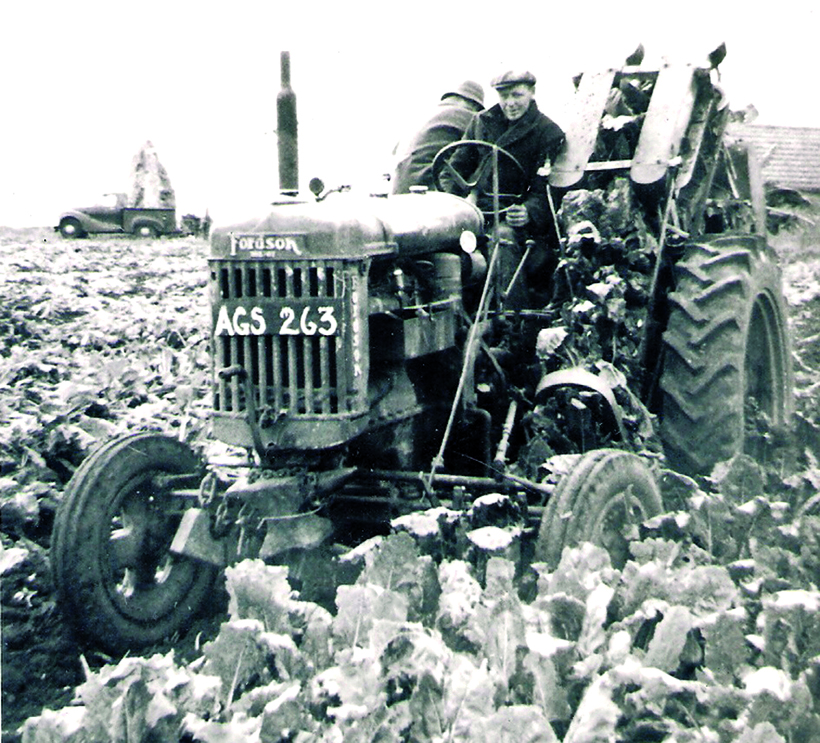 A Fordson E27N and Armer beet harvester being demonstrated at Grange Farm, Kirkcaldy, in 1958.

Timely revival
When fodder beet was grown in Fife during the 1980s, some old sugar beet machinery that had been lying around on farms since the 1960s, was pressed back into service for harvesting. Two Standen Rapides were used in Fife, while secondhand Armer Salmon Cheetah machines from beet growing areas down south were bought by enterprising growers who not only lifted their own beet, but did contract work, too. The Webb and Stanhay precision seeders used to sow the turnip crop, had the pre-spaced wheels and belts changed to sow the beet. Even the Ferguson, Bean and Nicolson steerage hoes could be used for this new crop.

Harvesting it was a different matter, though, as the crop grew to a slightly different depth. Also, the harvested beet needed to be chopped or sliced to feed livestock. This meant any small stones lifted with the beet needed to be separated, together with any earth and muck. Stones would break the blades of the chopping machines, such as the MIL, Ritchie, Boswell, and Keenan machines, which fed directly into the troughs.

Beet clean
This meant many an old beet-cleaner was also pressed back into service, including Boswell root cleaners. Those produced  by Ovenstone Engineering of Pittenweem were also restored and put back to work in Fife. One grower even got out his old Fergie TE-F20 and fitted the belt pulley unit with chains which spun around and slashed the beet leaves in front of a modern Massey Ferguson 1075 which, in turn, operated the Standen Rapide harvester. Using a Ferguson belt pulley in this way was also popular at one time, for pulverising potato foliage. 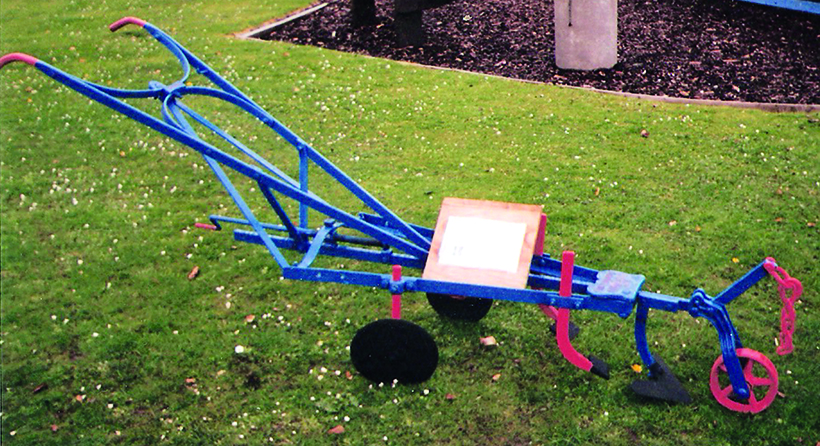 A Hunter Hoe was one of the best, horse-drawn implements for cleaning the beet crop.

But, if the current proposal goes ahead, we’ll see none of the old sugar beet machinery return a third time. Much of it disappeared during the period of high scrap prices before 2008. Modern, multi-row, self-propelled harvesters already operate for the energy beet crop, and it’ll be this type of machinery which will no doubt harvest the beet for biofuel production.

Traditional fieldcraft
However, the sight of the rich green leaves of many fields of beet will stir the memories of many an elder statesman of east-central Scottish agriculture. When first grown, it was the knowhow of growing turnips that prevailed. The appointment of factory fieldsmen by the factory owners – firstly Anglo Scottish Sugar Co, then BSC – changed methods slightly, as beet became a crop in its own right.

One of the first measures the factory wanted to introduce was to have the crop grown on the flat, not on ridges. The usual conservatism of farmers was encountered, but was gradually overcome. It’s said that sugar beet was another reason which helped reversible ploughing get a foothold. These fieldsmen would offer advice on the soil fertility, lime, fertiliser and weed-control methods. They would also discuss seed types with farmers before each season. 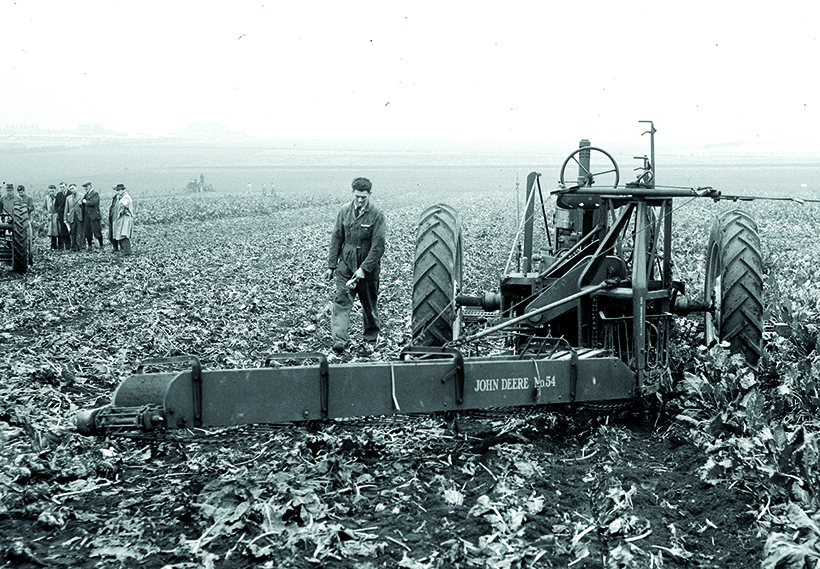 A John Deere No. 54 beet harvester on demonstration at Seton Longriddry, in East Lothian, shortly after the Second World War.

Seed drill
This seed would be sown by the aforementioned precision drills, which came after the war, before many of the older turnip drills from the likes of Wallace, Ballach, Sellars and Elder of Berwick. When Harry Ferguson’s hydraulic system arrived in the 1940s, some new, mounted drills arrived to sow root crops in rows. These included the Humberside Agricultural Products Company’s bean drill; others came from Robot and MB Wild.

One other produced especially for beet growers in this part of Scotland, was the St Andrews improved drill, designed and built by Ed Harvey at Greenside Works, in the home of golf. These machines could come in a variety of widths but, sadly, none appear to have made it into preservation. These machines didn’t have accurate spacing, and the arrival soon after of the Webb and Stanhay types, consigned them to the scrapheap. Massey Ferguson also offered its own precision drill in the early 1960s. 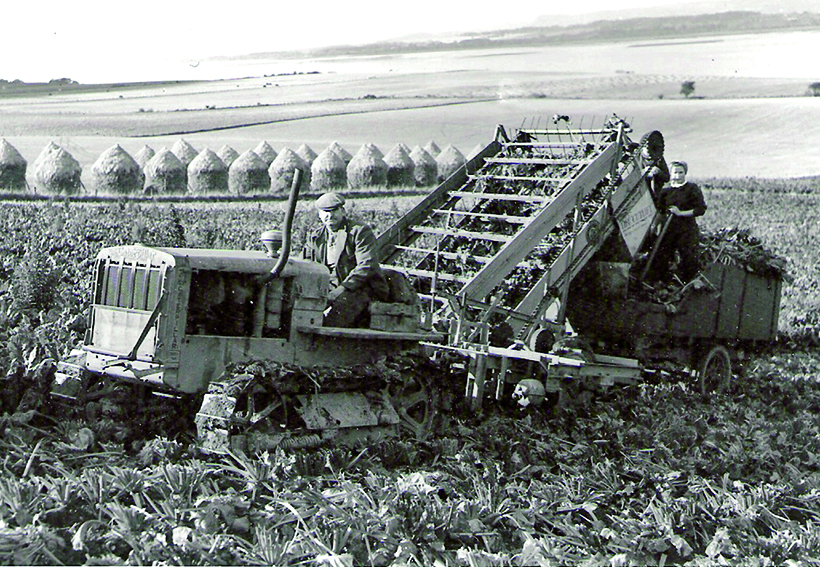 A Caterpillar 22 hauling a Wilder Cutlift to harvest beet tops for animal feed in 1950.

Steerage hoes and front- and mid-mounted hoes, could be used for all root crops, with perhaps some adjustments made to widths for different crops, with Standen and Webb offering these specialised beet versions. Many differing inter-row cultivators were put to work to clean the crop, be it the famous Hunter horse hoe or those from Ransomes, where L-shaped blades could be fitted to their variable width toolbars. Likewise, adjustable width Ferguson or David Brown cultivators could also be used. One novel machine used to keep the rows between the beet free was an inter-row steerage rotary cultivator from Standen, of which one existed in Fife.

Standen produced a whole range of specialised machinery for all seasons for beet growers. In Fife, the agents were MF dealers Farm Mechanisation in Cupar, in competition with JBW Smith which offered Catchpole. International agents AJ Bowen of Markinch, sold John Salmon equipment, while Nuffield dealer Burnett of Pittenweem, handled Dyson beet machinery as well as its own Ovenstone Cleaners. 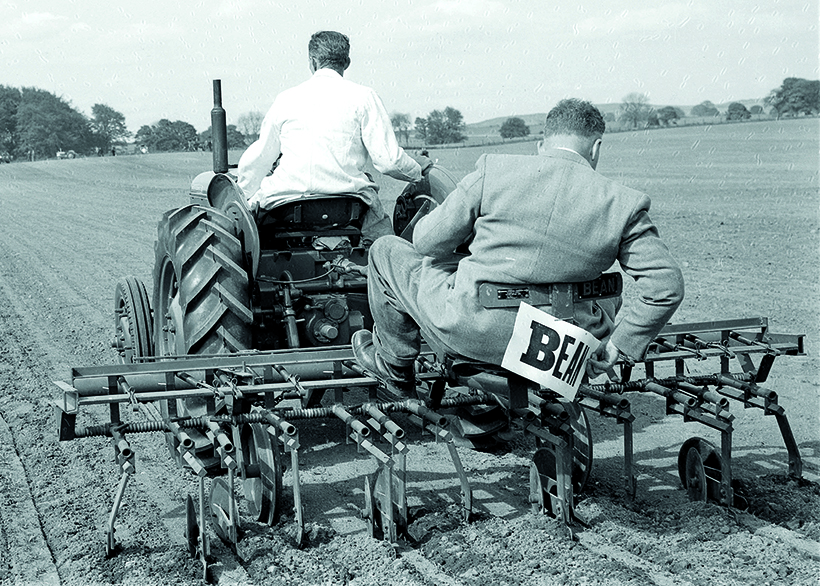 A David Brown 25 or 30 tractor operates a Bean steerage hoe during a sugar beet demonstration at Carriston Farm, Markinch, Fife, in 1953.

Singling and gapping
There was a tremendous skill base among Scottish farmers and their workers. One of these skills was the art of turnip ‘singling’, which required the small hedge-like rows of plants to be reduced down to one plant, about 8in apart, to allow room and enough nutrients for the bulb to swell during the growing season. This skill was also required for growing beet for the same reasons, although the beet was much harder to ‘single’, as the stalks of several plants were tangled around each other, making it a tricky job to separate them. It was noted how Scottish singling squads had the skills to do this upright with a hoe, instead of getting down on their hands and knees to do it. 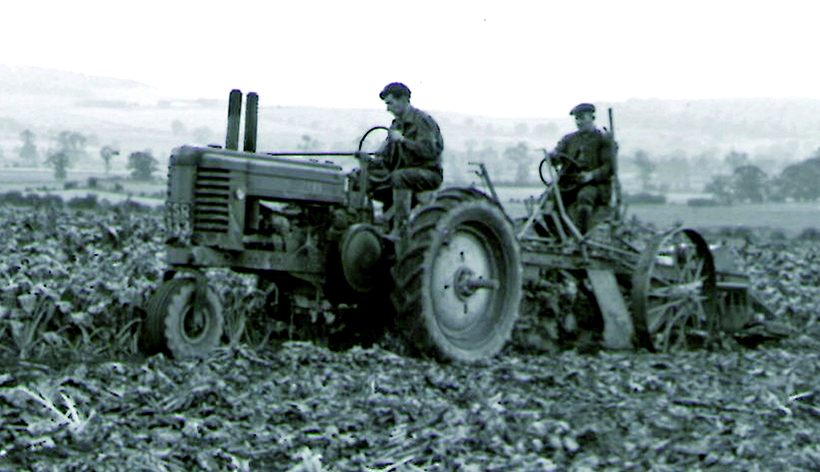 A John Deere A and Catchpole harvester at work somewhere in Fife, around 1950.

In September, the factory would open to accept beet for processing. Beet intake was very controlled, with permits for when and what quantity you could deliver. But, for the first few days, they offered free unloading to build up enough beet to keep the factory going full time. Being September, many farmers were busy with other harvesting work, and couldn’t devote enough time to the beet, which might still have a bit of growing to do to allow the yield to increase.

Hand labour
Early harvests were all hand-lifting affairs, with farmworkers or casual labourers (paid on piece-work rates) coming in to pull beet by hand and then chop off the tops. The beet was loaded with beet graips into carts, then taken to the side of the field for loading into lorries, or even to a nearby railway siding for loading into railway wagons for shipment to the factory. Casual rates also applied to thinning squads, and many Irish workers came over for the season. 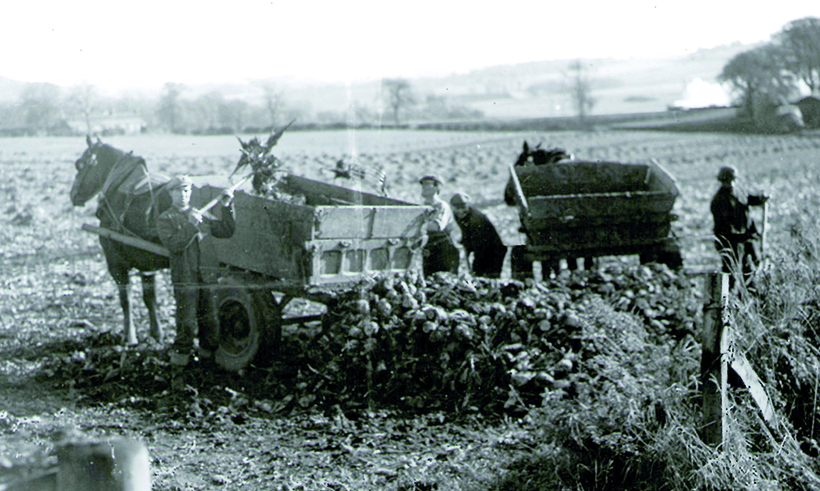 Making pulling easier was the job of the beet plough, which was a deep-bladed implement that went down the side of the roots and eased them loose. In the days of horse ploughs, beet ploughs were offered by the likes of Ransomes, although many a blacksmith would be asked to make ploughs for local farmers. This comprised a metal plate about 12-15in deep, with a little point fitted at the bottom to slide under the plant. The plate was bolted to the beam on the frame of the horse implement being converted.

Pre-war situation
Often horse-drawn beet ploughs would be drawn by a tractor. Pre-war mechanisation of the beet harvest in Scotland was pretty basic, although much more dedicated equipment became available and was no doubt utilised by some progressive English growers. The 1939 Highland Show at Edinburgh saw only two beet machines exhibited; both were lifters from Ransomes and Bentall. Some American manufacturers who imported in the 1930s and during the Lend-Lease years of the war, saw their tractors – many of which had some sort of power lift attachment – used for cultivating and hoeing the crop during the growing season. 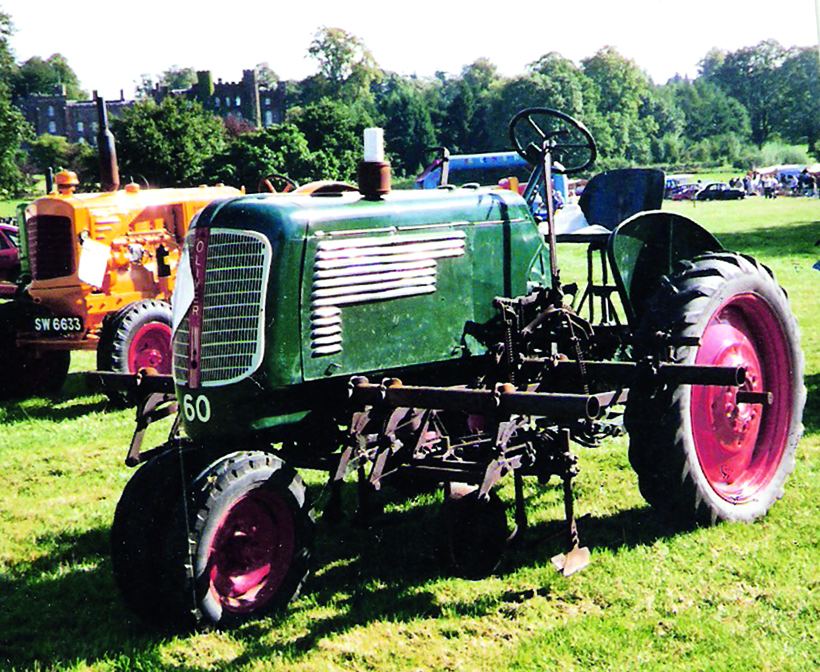 An Oliver 60 tractor and mid-mounted toolbar; typical of the machinery used in the 1940s.

Both International and John Deere had beet-lifting equipment. IH had the bow-shaped lifter (two shares working on either side of the plants). John Deere had the No. 54 beet-lifter, which was a complex machine mounted on an A or B tractor. It lifted the beets, cleaned them on a revolving, spoked wheel which then fed a long elevator that swung behind the tractor and allowed six rows to be put into one for a following lifting machine to load into trailers. Although great use was made in Scotland of power-lift cultivators, how many of the lifters made it here is unknown. 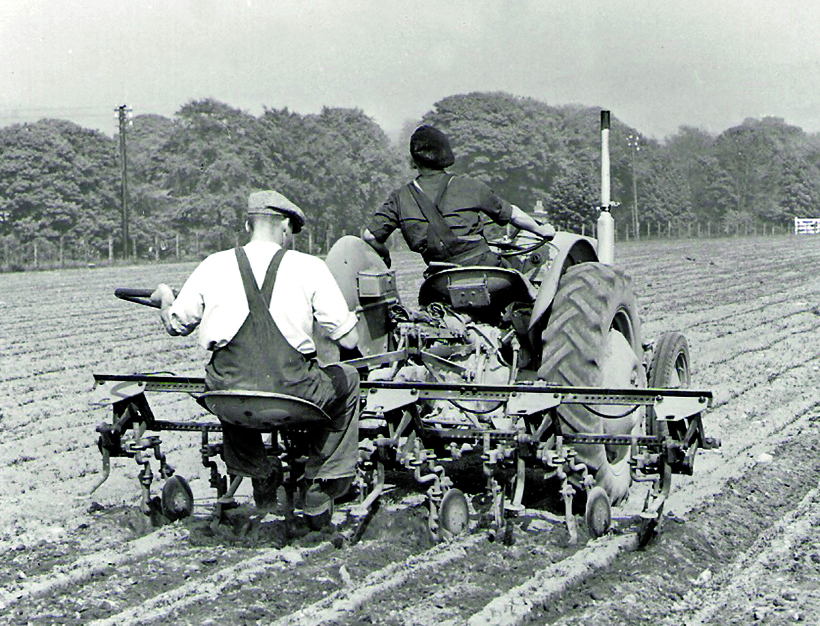 Steerage hoeing beet at Kirkton of Balmirmer, Angus, in 1956, with a Bean steerage hoe fitted with Reekie weeder tines. 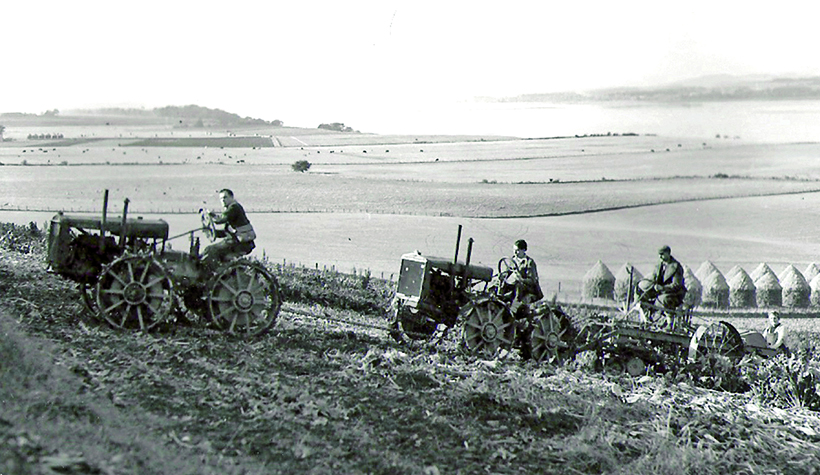 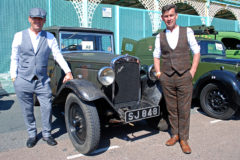 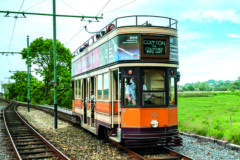