Mike Forbes presents a wonderful selection of photographs of 1950s lorries hard at work in quarries, from the Chris Hodge ‘Stilltime’ Collection. 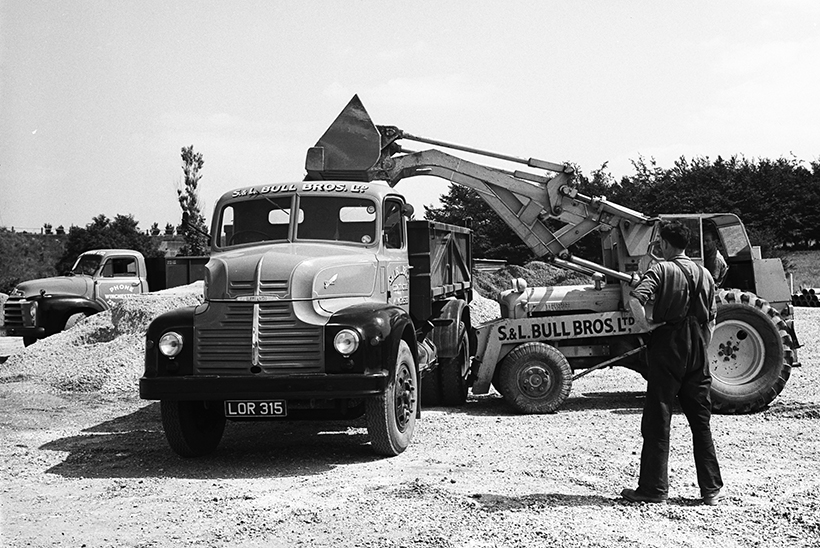 1950s lorries hard at work: Let’s start with some short wheelbase tippers of the 1950s, from the mixed fleet of S&L Bull Bros, of Winchester, being loaded with aggregates at the company’s quarry. Here a Leyland Comet, LOR 315 (Hampshire, 1953), is seen being loaded by a Weatherill hydraulic loader, based on a Fordson Major tractor – quite a popular machine at the time – while a Bedford ‘TD’ Series waits its turn beyond the ‘pile’.

The photographs included here show lorries working in some of the hostile sorts of environments, where raw materials were being extracted, sometimes from quite impressive ‘holes in the ground’.

I’ve personally always found tippers rather fascinating; watching the hydraulic ram pushing the body up, the tailboard opening and the load cascading out of the back. Equally compelling is seeing some sort of excavator or loader – which tend to come under the catch-all description of ‘digger’ for most of us – as it drops its bucket-load into the back of a tipper on site or, in this case, in a quarry.

Many minerals of one sort or another – from sand to coal – are dug out of the ground and need to be moved, first to the nearest road – or in some cases, railway – then on to where they will be put to use. Sometimes what we might term the ‘primary haul’, from the quarry face, will go directly to the production process at the ‘works’. Cement would be an example of this. Aggregates – sand, gravel and stone – usually need ‘sorting’ into different grades or sizes, so they are taken to stockpiles, from where the road tippers will transport them to the site where they will be used.

Some of the photographs here show various types of dumper from the past, derived from the manufacturers’ heaviest road-going models, with heavy-duty bodies. Compared with the giant, specialist vehicles often used today, they might be small, but they were certainly impressive in their day.

Others were little more than standard or ex-military lorries – in some cases on quite lightweight chassis – often beefed-up for their gruelling duties, as off-road work is hard on everything, from wheels and tyres to engines and bodywork. A few of the photographs show demonstrators being put to the test in extreme conditions. Got your wellies on? Let’s go off-road… 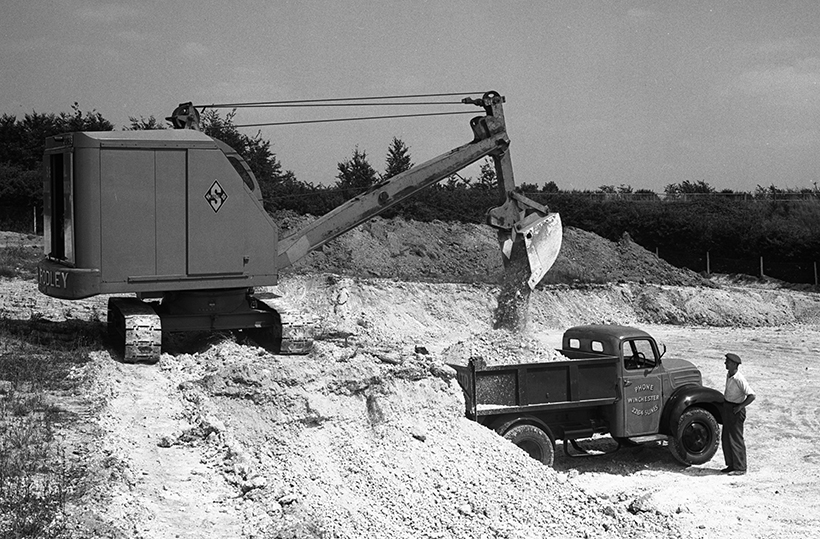 Another tipper in the S&L Bull Bros fleet, this time a Ford ET6 – with the same cab as the Leyland – being loaded by a tracked, Smith Rodley back-hoe excavator, direct from the quarry face. It looks as if all the vehicles have been ‘bulled-up’ ready for the photo-shoot. 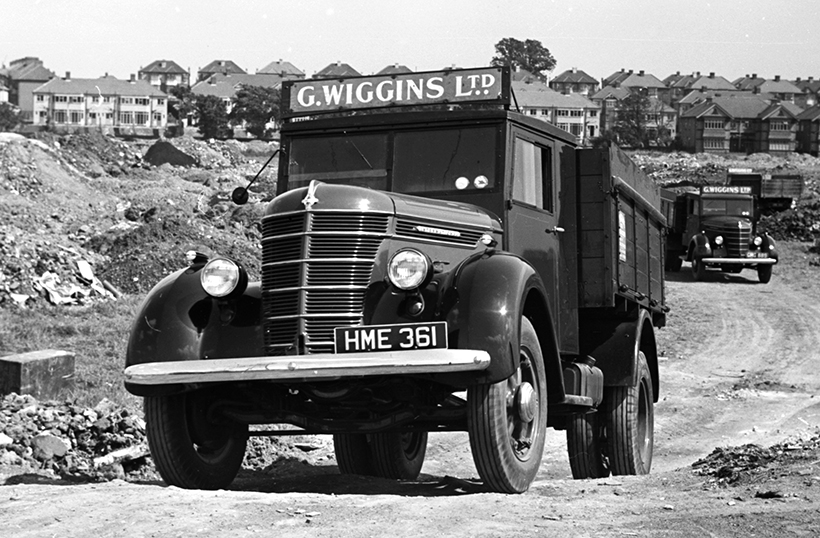 Perhaps not strictly a ‘quarry scene’, but there was certainly excavation going on. G Wiggins of Dalston, in East London, was operating several International D30 short-wheelbase tippers, like HME 361 and GMG 889 (both Middlesex, 1937). The angular, coachbuilt cabs rather contrast with the streamlined bonnet style. Another mixed fleet was that of Pointer of Norwich. These two, short-wheelbase tippers were a Morris WE, KCL 68 (Norwich, 1956) and a Bedford ‘TA’, RAH 399 (Norfolk, 1954), both diesel-powered, under the hopper at a sand pit, showing variations in the company’s livery, as well. 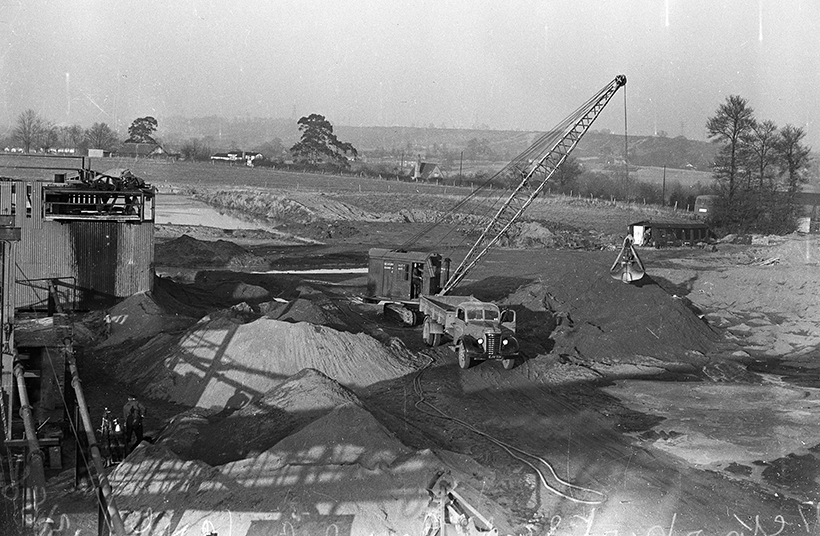 Probably photographed from the top of the hopper, at the Severn Valley Sand & Gravel Company pit, being loaded by a Ruston Bucyrus 15RB with a clam-shell bucket, this International, EJW 321 (Wolverhampton, 1946), was most likely one of the many of this type brought over from America during the war. 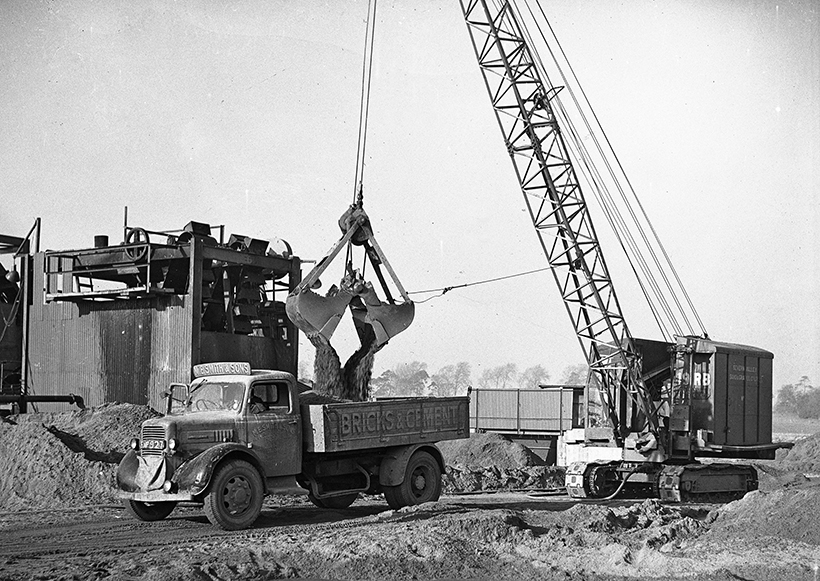 Seen at the same location, being loaded by the same 15RB, is this Commer N Type, ENP 927 (Worcestershire, 1943). Note the small, wartime headlamps on this vehicle from ME Smith & Sons, hauliers and builders merchants. 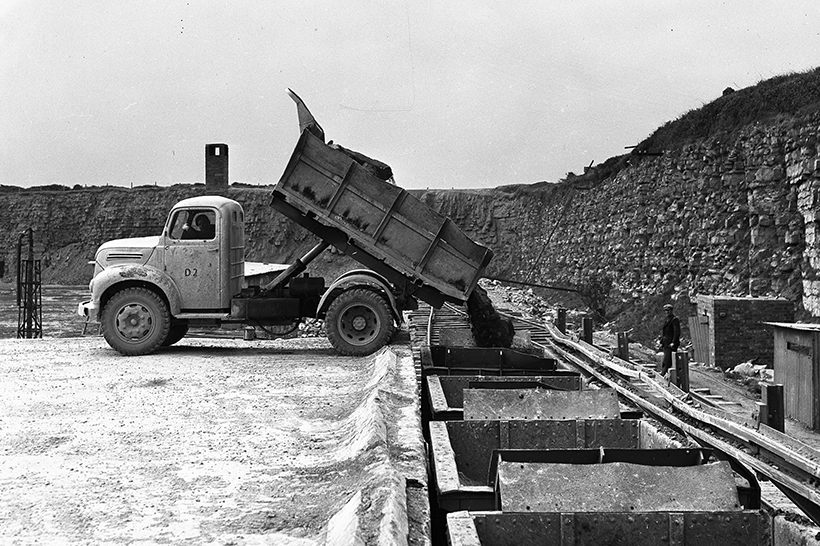 What we think of as comparatively lightweight chassis were surprisingly often used on arduous, off-road work, as here where this Dodge 100 Series short-wheelbase five-tonner. It’s working between the quarry face and railway sidings, at Aberthaw cement works. Similar vehicles were also used on the road, like VNY 988 (Glamorgan, 1957), fitted with a bull powder tank. 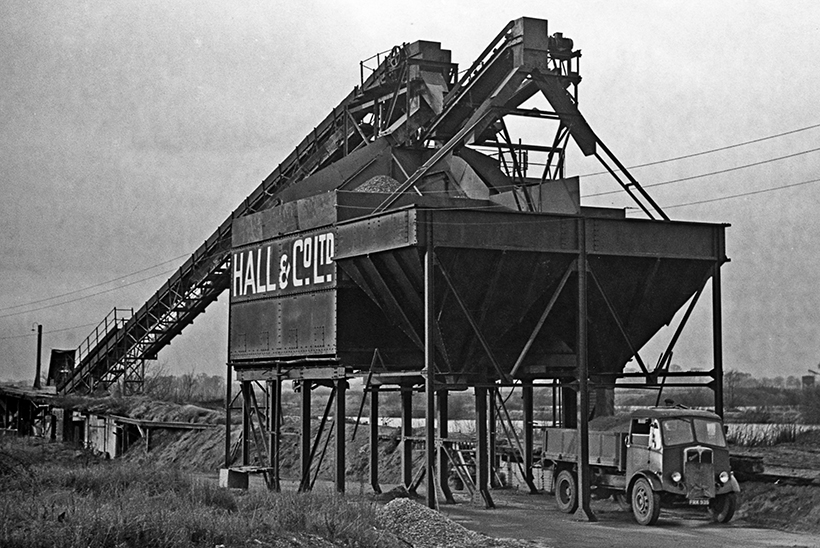 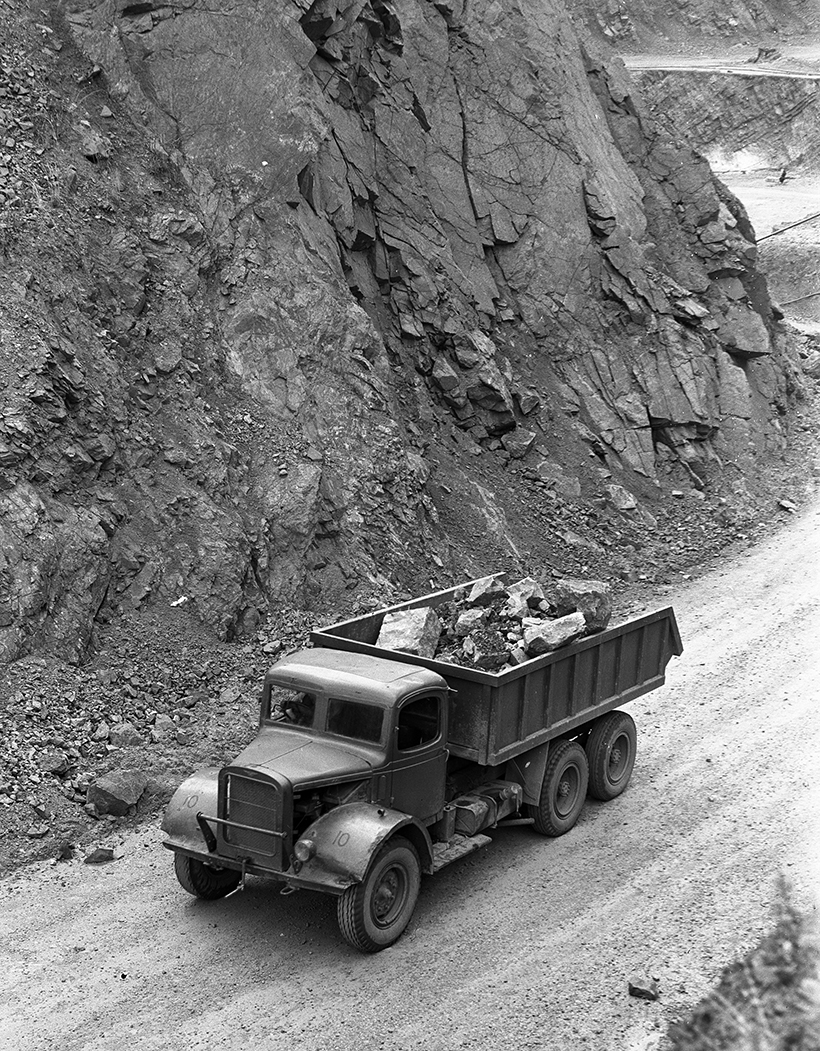 Seen on a haul road out of a quarry, believed to be that of Judkins of Nuneaton, which used a number of these ex-WD Austin K6 six-wheelers, fitted with Perkins diesel engines, both road-registered and, as here, with a heavy-duty body off-road. Here we see a truly off-road dumper truck, a Foden four-wheeler, with the classic type of body, with a large, protective headboard over its half-cab. The cab is lettered ‘APCM Ltd, Plymstock Works’, part of the Blue Circle Cement organisation. 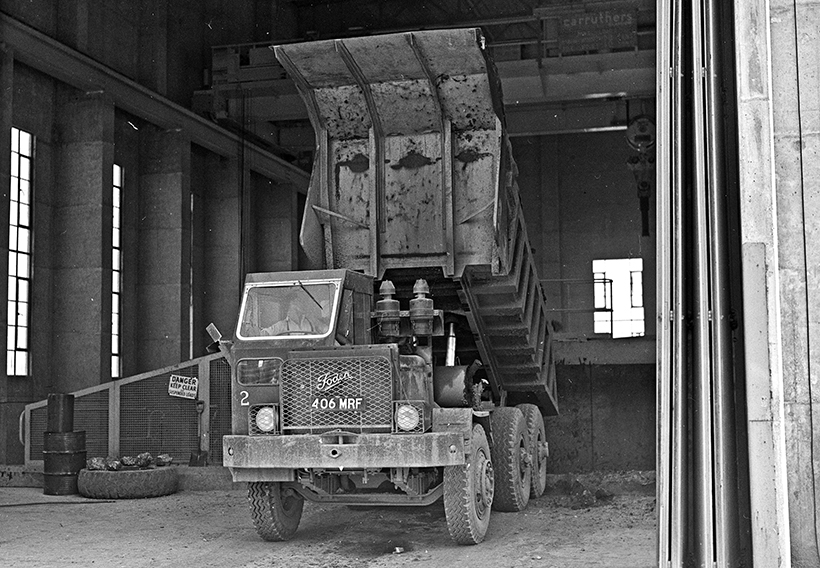 A Foden half-cab six-wheeled dump truck this time, 406 MRF (Staffordshire, 1956), tipping its load under cover into the bunker for onward movement and processing. 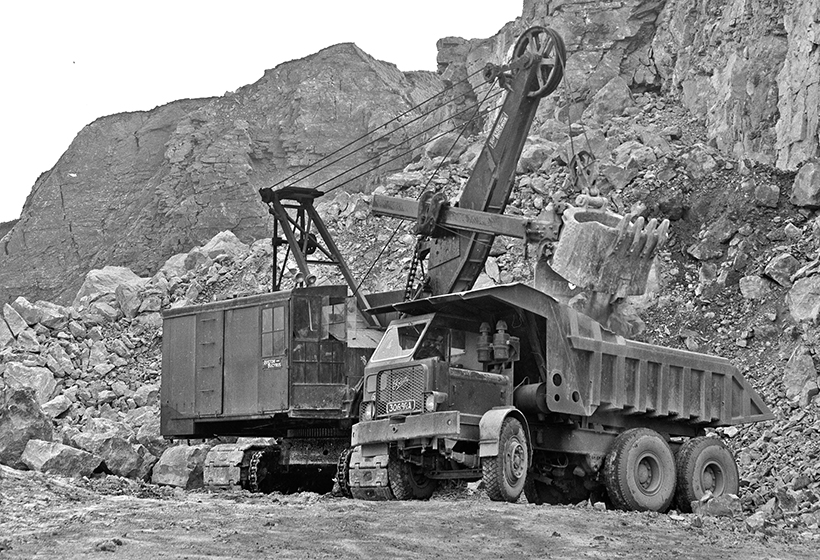 A similar Foden half-cab six-wheeler, 306 BRA (Derbyshire, 1956), being loaded in the quarry by a Ruston Bucyrus with a face shovel or ‘skimmer’ bucket. Vehicles like this were designed to carry heavy loads off-road, standing up to plenty of punishment as they did so. 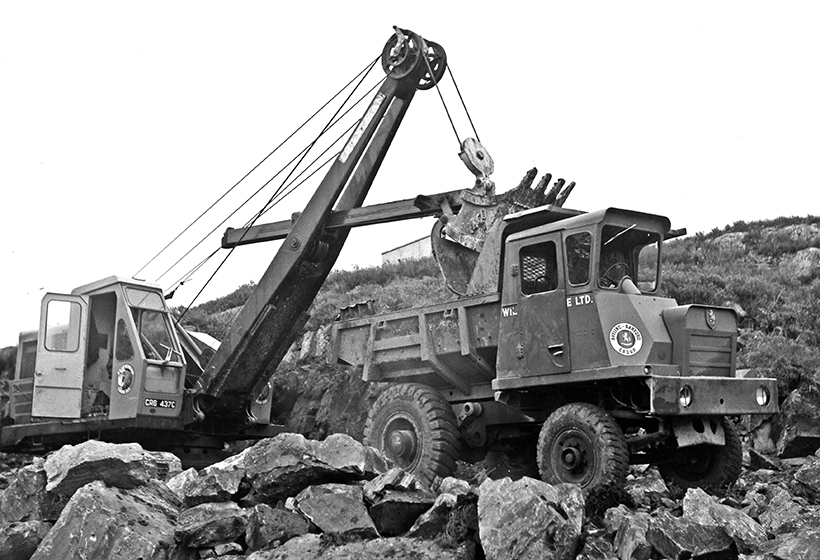 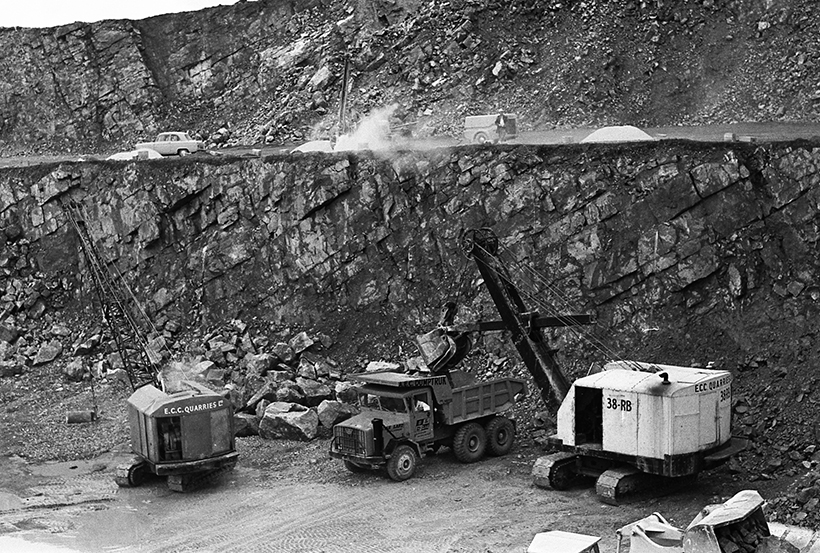 An AEC ‘Dumptruk’, believed to have been on demonstration from the distributor for this model, Scottish Land Development, being loaded by a 38RB Ruston Bucyrus face shovel in an English China Clays quarry, while a smaller ECC machine swings a weight to break up rocks. 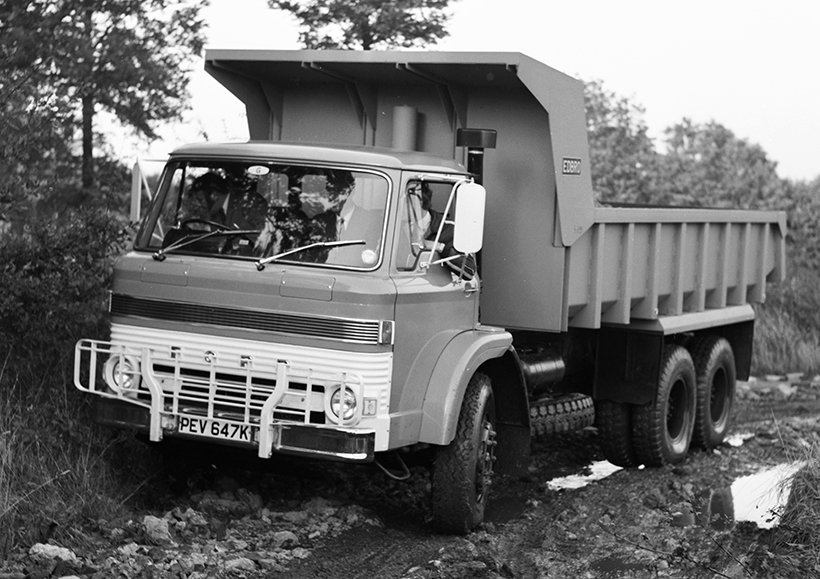 A Ford D2417 or D2418 (depending on whether a Perkins or Cummins V8 engine was fitted) six-wheeler, PEV 647K (Essex, 1971), presumably a Ford Motor Company demonstrator, fitted with a substantial Edbro dumper-style body, being tested off-road in quarry-like conditions. 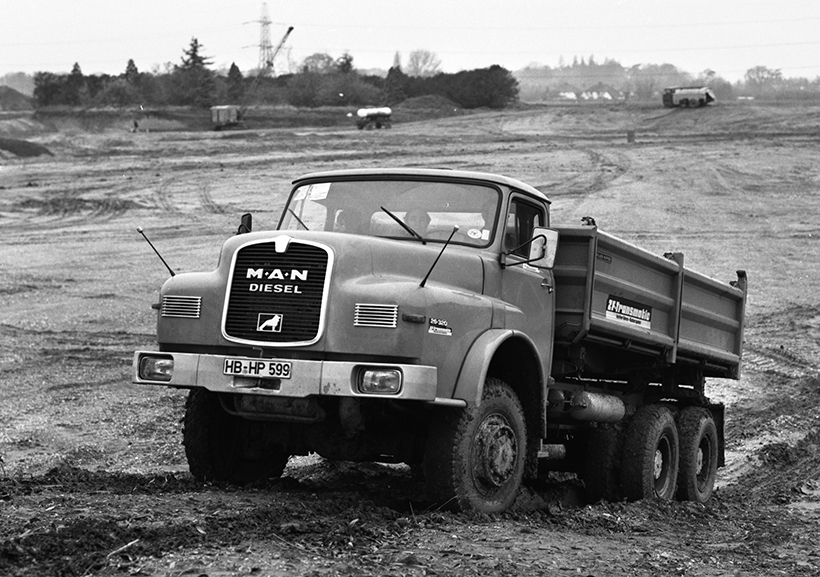 Another demonstrator, this time a MAN 26-320 bonneted six-wheeler, probably with all-wheel-drive, showing off its ZF ‘Transmobic’ transmission in a quarry, presumably somewhere near the factory in Germany. 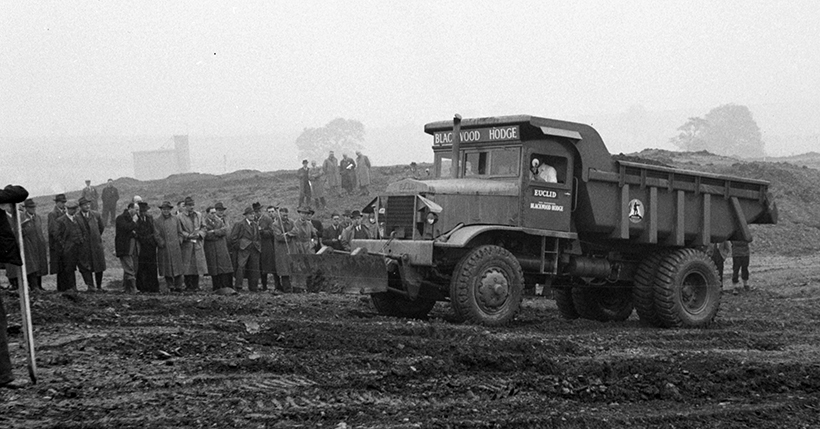 A classic, Euclid four-wheeled dump truck, unusually fitted with a blade on the front, being demonstrated by the distributor, Blackwood Hodge, to the transport press and potential customers. 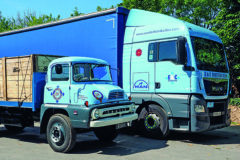 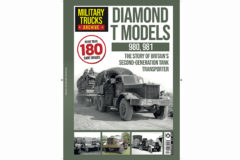