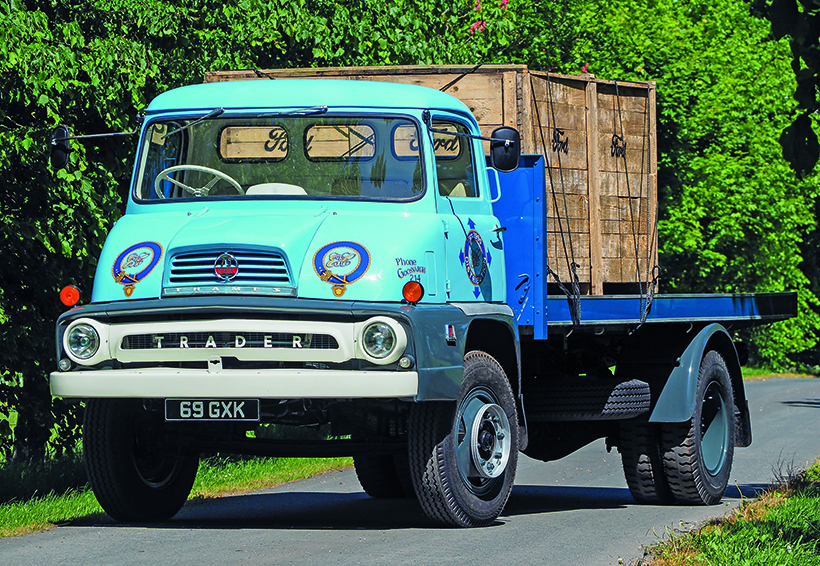 Back in July 2017, we met Ian Chadwick, a Lancashire based tractor fan with a particular interest in Roadless four-wheel-drive adaptions of Ford tractors, and a large collection of these rare vehicles. Back then, he’d just completed his first lorry restoration and it was an entirely appropriate one – an all-wheel-drive 4×4 conversion of a Ford Thames Trader. H mentioned at the time: “If Roadless had ever built a wagon, this would be it.” We concluded the feature by mentioning that another 4×4 lorry, a Bedford MJ which had spent its working life pushing a snowplough around Aberdeen airport, which was awaiting restoration.

Now, three years on, it seems that the lorry bug has bitten. Work on the MJ is now underway, while another Thames Trader – a 4D – is also part-way through a rebuild, with the hardest part of all – the cab – done. However, a third Thames Trader – a 1963 Mk2 – has now been completed and, although more conventional than the 4×4, the restoration of this one was by no means straightforward…

It’s a mystery
The new Trader came Ian’s way via a slightly unusual source for a vehicle of this kind; it was actually advertised on a local Morecambe ‘buy it, sell it, swap it’ Facebook site. He saw it in May 2018, made arrangements to view and, although it was in quite a state (to put it mildly!), he agreed to buy. 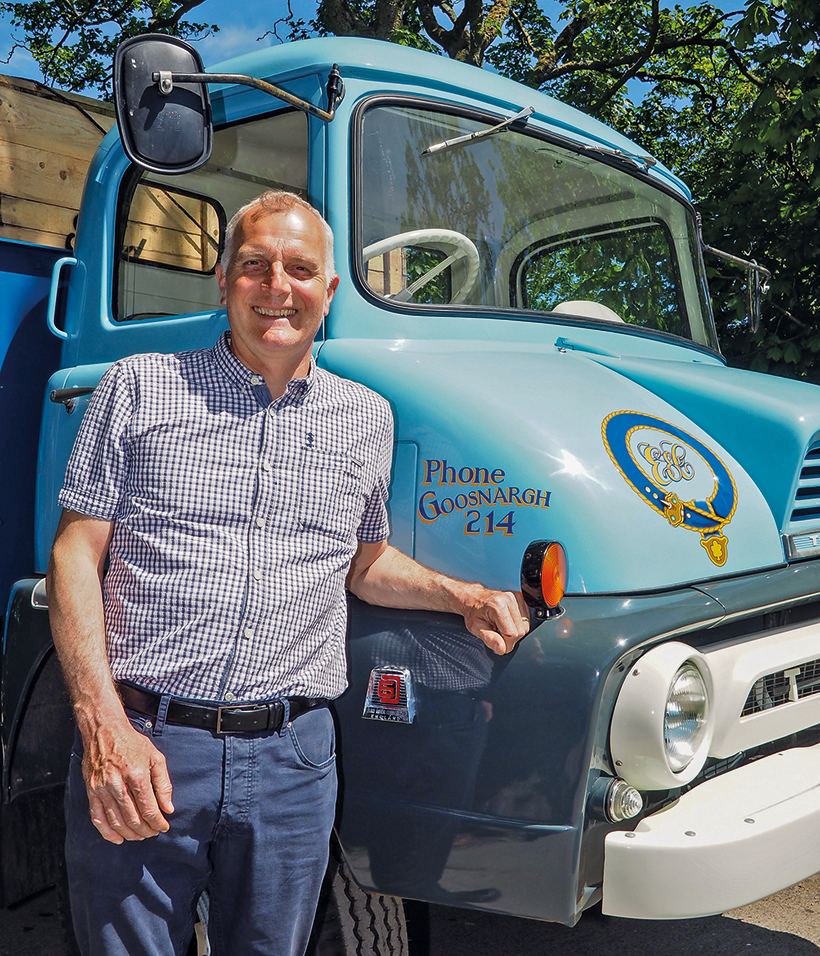 Ian Chadwick with his latest restoration; two completed, two still to do!

The lorry’s history is a bit of a mystery, and clearly any help readers can provide here would be appreciated. It’s thought to have spent at least part of its working life in the Morecambe area; Ian has heard that it may have been working as late as 2011, though this is unconfirmed and would surely have been ‘noticed’. A plaque in the cab displays ‘FMC Ltd’, and Ian initially thought that this may refer to a Lancashire-based poultry processing company that his Mother once worked for. Equally, though, ‘FMC’ might stand for Ford Motor Company.

‘XK’ is a London area registration which could possibly fit in with ownership by Ford, though factory-owned Fords were generally registered in Essex. Was it, perhaps, an official/government vehicle of some kind? Two clues suggest this as a possibility. Firstly, the cab is a three-seater, with a bench-type passenger seat rather than the more usual single. Secondly, when bought, the Trader came with a six-cylinder petrol engine, rather than the more usual diesel. 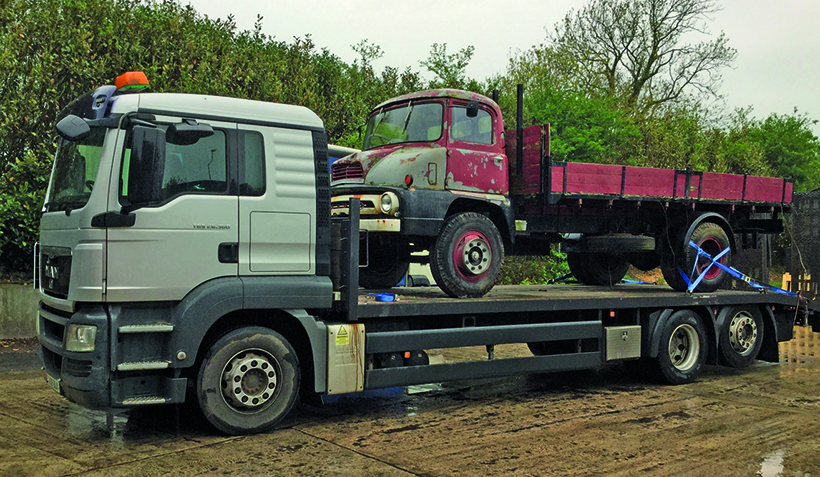 The Thames Trader arrives at Ian’s premises in 2018, for the restoration to begin.

This had clearly been fitted from new and suggested, maybe, that speed was more important to the original owner than running costs. Ian has changed this as part of the restoration. “Purists may be unhappy,” he told me, “but they don’t pay for the fuel.” It was a straightforward bolt-in conversion, and the original petrol engine has been retained so that if a subsequent owner wants to return the lorry to original spec, they can…

Three days after agreeing the purchase, Ian collected the Trader. On arrival back at his base, he was able to inspect his latest project in greater detail and, as often happens, this did make him wonder if he’d done the wrong thing. The cab, in particular, was in very poor condition, with rot around the gutters so severe that the roof could be lifted right off from inside, by pushing up. “We were lucky not to have lost it on the way back” Ian said. There was also significant rot to the floor and lower cab sections. The wooden flatbed – which looked to be original – was also in extremely poor condition.

On the positive side, however, the lorry was at least substantially complete, and what remained of the cab panelwork did at least look fairly straight and undamaged.

Tricky cab repairs
Work on the restoration started pretty-much straightaway, with a complete stripdown. Clearly the cab was going to be a tricky repair from start to finish but, having already restored two Trader cabs – one for the AWD, another for the 4D Trader – Ian and his team did at least have experience on their side. Accordingly, a lifting structure was designed and constructed to support the cab underneath while it was being lifted, to prevent twisting. 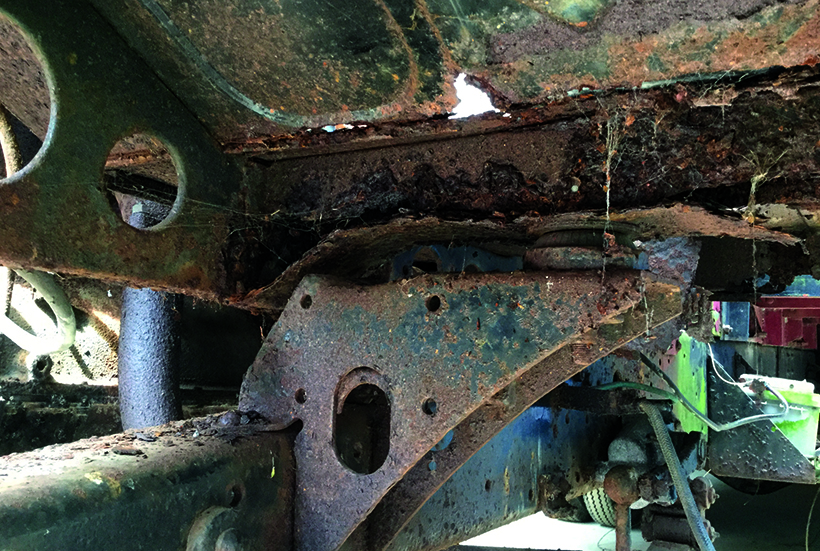 As expected, the floor needed extensive repair. Stanley Brothers of Great Harwood had supplied complete replacement floors for the previous Trader cabs, which had been cut to suit what actually needed replacement, and the remains of these, along with some making up and shaping, was sufficient to repair this cab’s floor. As Ian put it, “we used two complete floors to repair three cabs.” The roof and lower sections were also repaired extensively by letting in new metal, as required. Unusually, however, the cab wings – front and rear sections – were in ‘quite good’ condition, and needed little more than cosmetic repairs. 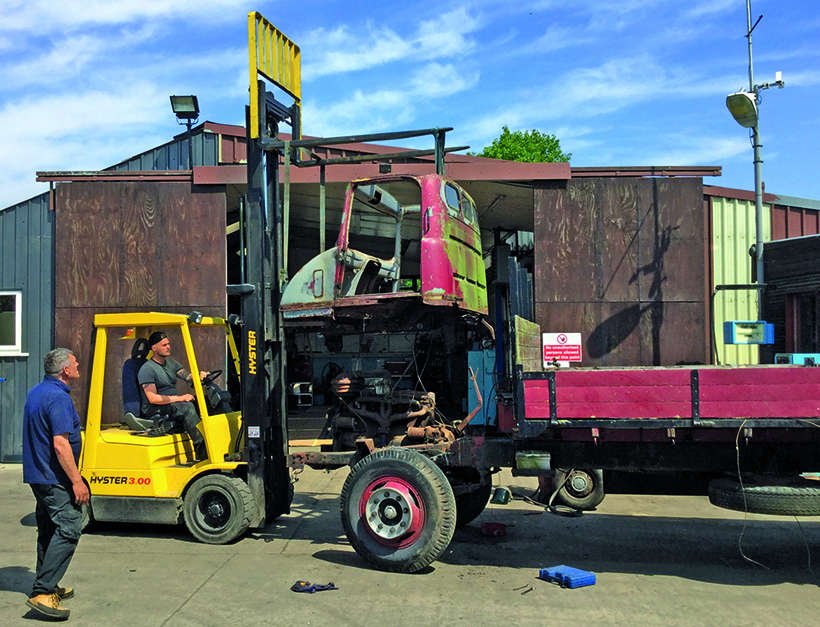 Removing the cab required extra care, and a purpose-built lifting cradle, to stop it from distorting due to all the corrosion present.

When it came to the body, Ian decided that, as the original needed extensive repair anyway, he’d replace it with an alloy body, bought via eBay from a previous owner based on the south coast. It was about 3ft too long, so the front section was cut off and the headboard retrieved and refitted. The 6in chassis runners didn’t look quite right when the shortened body was trial-fitted, so were replaced with new, 3in ones. The large wooden crate that forms a ‘load’ was sourced via DCL Transport of Garstang, and the Ford stencils cut out by Ian and spray-painted on using matt black aerosol. 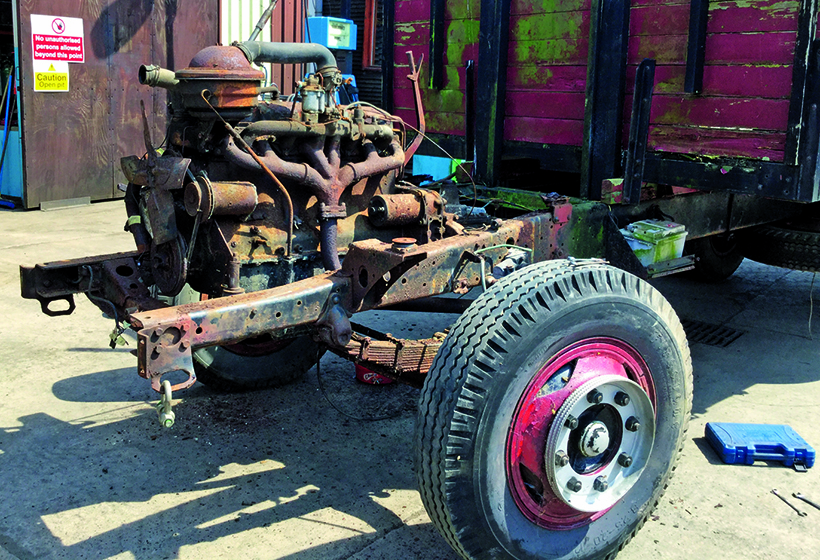 The original petrol engine needed a rebuild, but was due to be replaced by a diesel unit, anyway.

The main chassis was stripped, shot-blasted, cleaned and refinished in chassis black. Most of the running gear ­– including the steering – was in pretty good order, so needed little more than the usual strip and service, along with a new set of 8.25×20 crossplies made by Mitas, and supplied by the British Rubber Company of Shipley, West Yorkshire. Ian’s pleased with these as the tread ‘looks just right’. 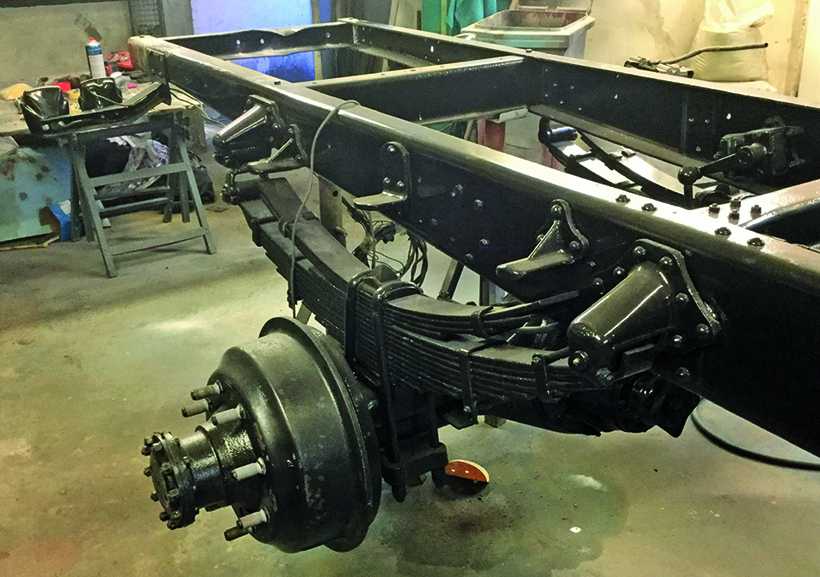 The chassis was cleaned up and repainted using chassis black.

As already noted, Ian decided on a conversion to diesel power; a decision made mainly for economy, but also because the petrol engine wasn’t in good health and would have required a complete rebuild. The 6D diesel used in these lorries was also used in contemporary Ford tractors so, unsurprisingly, Ian had a choice of several spare engines ready and waiting to slot in! The one used was, he thinks, obtained many years ago from the agricultural machinery sales in York.

Straightforward swap
It was complete with injector pump and vacuum exhauster and, as the petrol and diesel blocks are identical, changing is a straightforward, drop-in swap, with the chassis mountings and gearbox connection all matching. The diesel engine did, however, need a full rebuild, which was carried out in-house. The gearbox and back axle were in good condition, and needed nothing beyond an oil change. 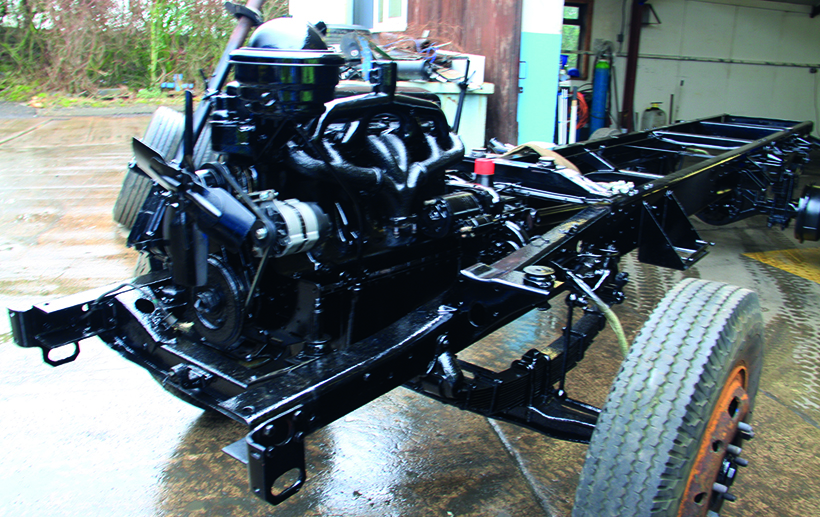 The replacement diesel engine was refurbished and refinished. To improve charging efficiency, the original dynamo was also replaced with an alternator.

One seemingly minor aspect of the engine swap did, however, provide a few headaches. On the petrol engine, the accelerator pedal and carburettor are connected by a cable, but the diesel has a fairly complex rod and linkage connection to the injector pump which, basically, had to be made up from scratch. To provide a pattern, the linkage from the awaiting-restoration 4D Trader was removed and copied, a process which involved ‘blacksmithing two heat rods and then flattening the ends, drilling, and fitting clevis and split pins.’ It all came good though, and the resulting, hand-made linkage is indistinguishable from an original factory set-up. For help with this part of the restoration and ‘much else besides’, Ian in keen to acknowledge the work of Graham Wilkinson, who helps out a lot with Ian’s various restored vehicles.

There was also a problem with the vacuum exhauster (which creates the vacuum needed to operate the hydravac braking system and vacuum-operated windscreen wipers, which is taken from the inlet manifold on a petrol engine). It wasn’t working and is, according to Ian, ‘a complex little thing.’ Needless to say, a few spares were to hand, but it took parts taken from three old ones to build up one that worked properly. Here, too, Graham Wilkinson was a great help. 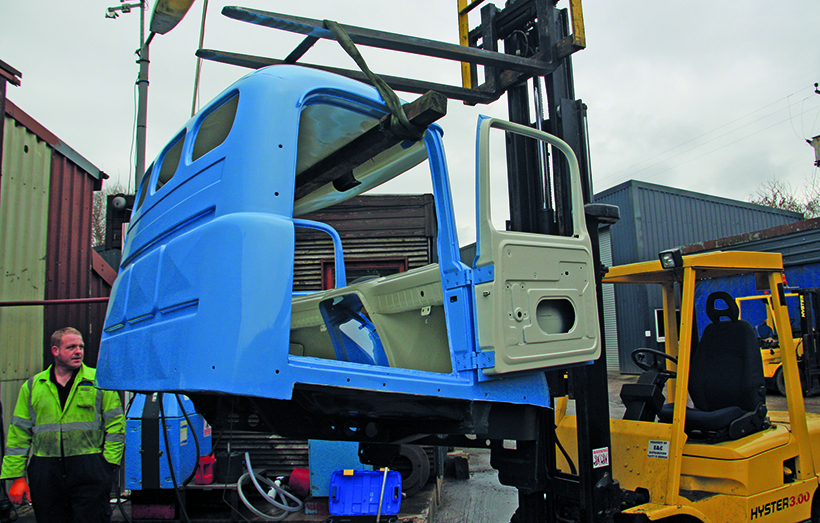 As with it removal, refitting the refurbished cab was a delicate operation, this time to avoid damaging the new paintwork.

The vacuum wiper system also proved to be ‘a bit of a challenge’. It’s a very common Ford problem, of course, and this is one that’s still not fully resolved as, even in full vacuum conditions, the wipers are still not as fast as they really should be. So far, two complete vacuum units have been stripped, lubricated and rebuilt, but work to resolve this particular issue is still very much on-going…

In the interests of safety, the wiring loom was stripped to its component wires, checked thoroughly and re-taped, with no problems found. At first, the original fusebox was reused, complete with original-pattern, glass fuses but, when the lorry went back into use, these kept becoming dislodged. So a more modern box, incorporating spade-type connectors, was fitted instead. 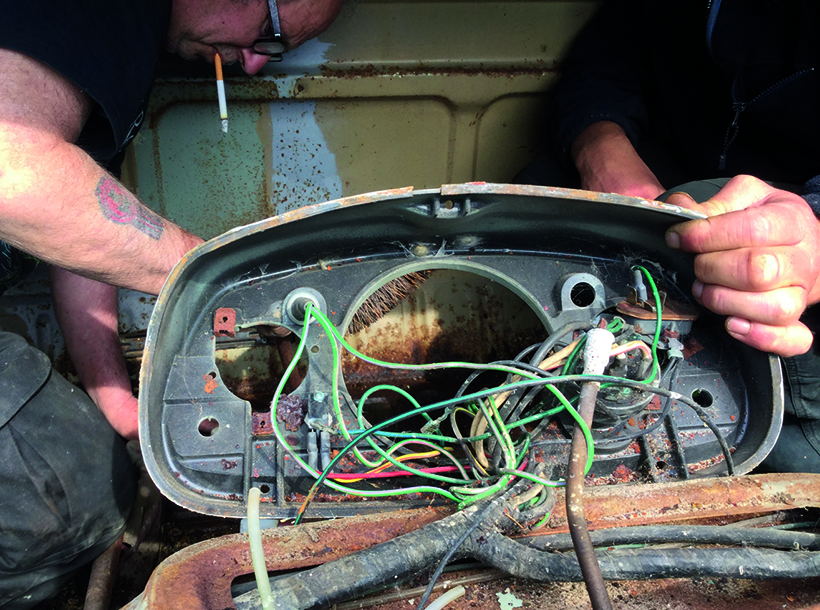 For safety, the original wiring loom was pulled apart and checked, but actually turned out to be in surprisingly good condition.

Cab trimming
Inside the cab, the seats were retrimmed by a professional trimmer in Preston, with the ‘does what it says on the tin’ name of Preston Car Trimmers, and they did a first-class job.

Ian chose to livery the Thames Trader in the colours of his company – E&C Distribution – with two-pack gloss being used, as on his fleet of modern lorries. Signwriting was carried out, using traditional techniques, by Eddie Ralph of Skipton, who was given ‘free rein’ to design a logo that E&C might have used had the firm existed in the middle-1960s. 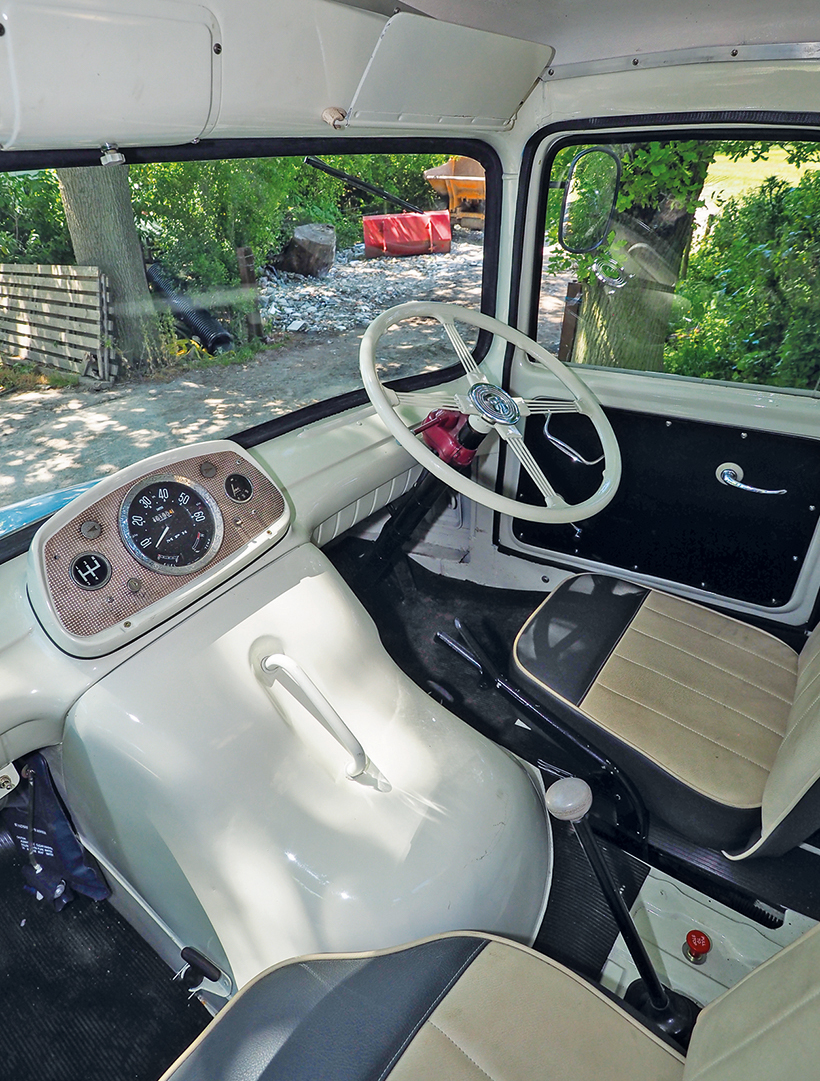 The seat were re-trimmed by Preston Car Trimmers.

The lorry was completed in the summer of 2019, a little over a year after work started; so clearly they weren’t wasting time! Its first – and, to date, only – show appearance was at the 2019 Newark Tractor Show, where it was on the Blue Force Tractor Club stand, Ian being one of the Blue Force trustees. It was ‘well received’ there, and Ian’s looking to do more lorry events in 2021. He’s a particular fan of lorry road runs and the three-seater cab is an obvious plus point in that regard. However, he concedes that it’s ‘a bit snug compared to a modern wagon,’ when driven three-up. 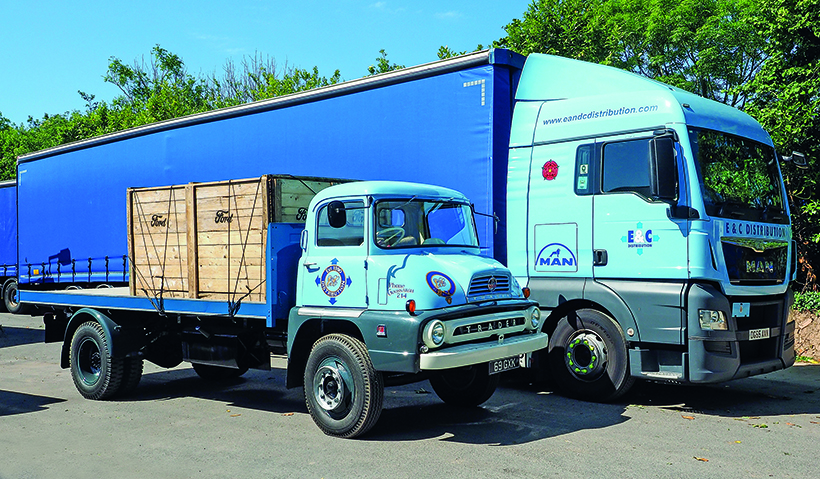 Old and new; the Thames Trader alongside one of Ian’s current fleet.

As might be expected, there’s been one ‘teething trouble’ since the lorry was completed; a broken valve spring resulted in a dropped valve. Fortunately, this happened when the engine was running at low speed, so no real collateral damage was done. The affected valve was renewed and a set of new springs fitted, and a slight tweak was made to the pump timing. Itt now starts instantly and runs superbly. Something which we look forward to seeing for ourselves when shows and events finally restart. 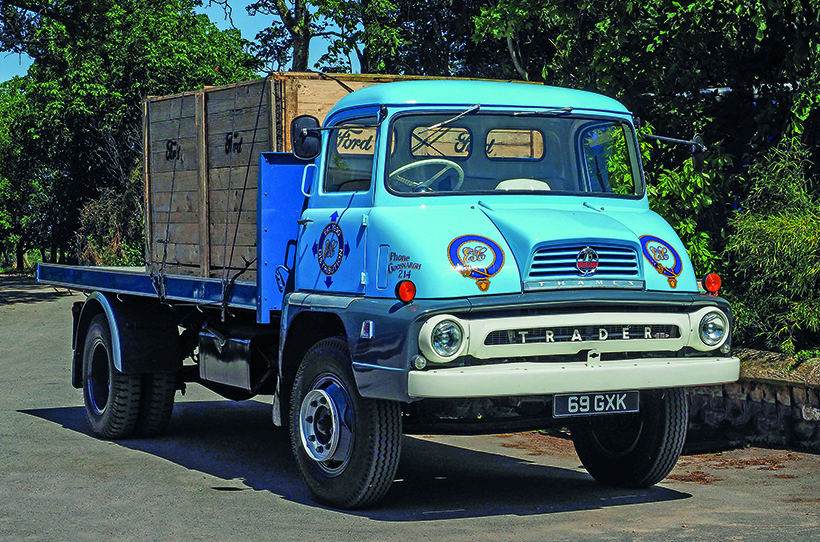 The finished Thames Trader is diesel-powered, but the original petrol engine has been retained and can go back should a future owner feel so inclined. 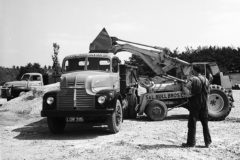