Pip Dunn discovers a superbly-restored, 1958 Foden S20 lorry that, at long last, is now back with its original owner. 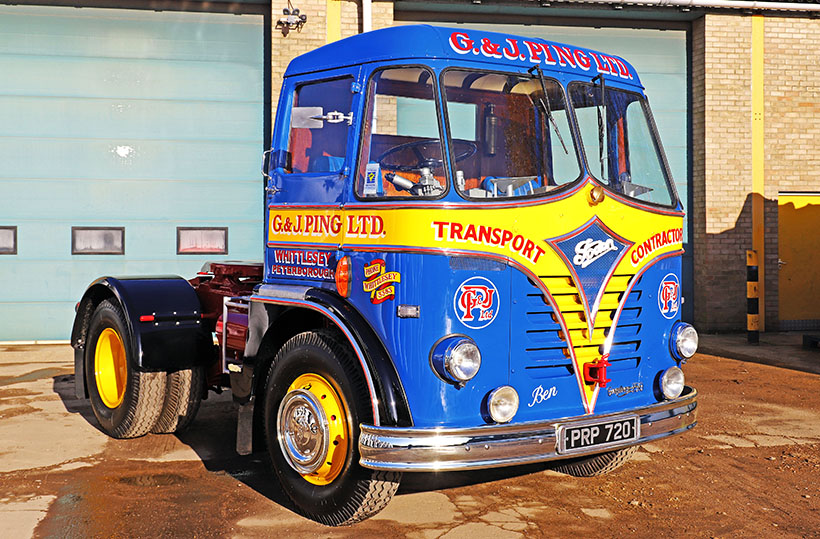 While I admit my preference for old lorries is for vehicles dating from the 1970s through to the early 2000s, when I saw David Ping’s immaculately-restored 1958 Foden S20 lorry, I was so incredibly impressed that I just had to find out more. Having seen the truck on Facebook, I spoke to David, and agreed to head down to Whittlesey to see the S20 for myself. And that’s when I found out that this old-timer has a fascinating history, not least of which is that it’s now back with its original owner!

The Foden S20 model first appeared in 1954, so it’s fair to say most were off the road when my interest in lorries began during the late 1970s. Consequently, I really didn’t know a lot about the model; it was time to go back to school, dig out a few books and find out more about this classic Sandbach product. 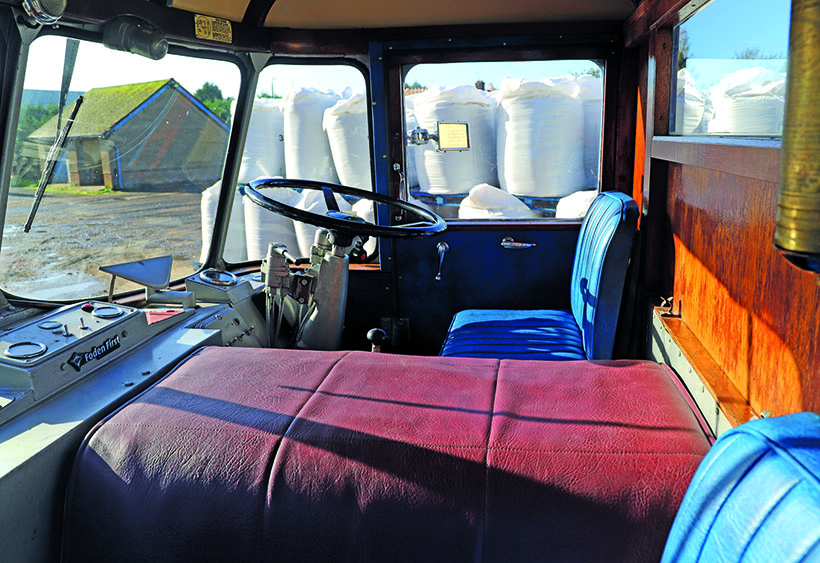 The cab, while basic, has been superbly restored.

A major change
PRP 720 is the registration plate that the 1958 Foden S20 lorry carries today, but this isn’t its original number plate. And the fact it’s a 4×2 tractor hides the fact it was actually built as an 8×4 tipper! It was new as JFL 751, and was bought by G&J Ping in 1958, a Whittlesey-based haulage company that started way back in 1930. Its claim to fame was that it was, allegedly, the first lorry in East Anglia to have a Gardner 150 engine.

As an 8×4, it had a triple-sided tipper body, and was used on agricultural and general bulk haulage, with trips from its base near Peterborough to Liverpool, Felixstowe Docks and as far afield as Scotland.

Sadly, the S20 was involved in a nasty collision near Lincoln in 1967. That saw it written-off, but David’s father bought the heavily-damaged truck from the insurance company, and decided to have it rebuilt as a 4×2 tractor. It was returned to Foden at Sandbach for the work, which was completed in 1968. The main reason for having it rebuilt, apparently, was that it was quicker and cheaper than waiting to get a new lorry off the Foden production line. 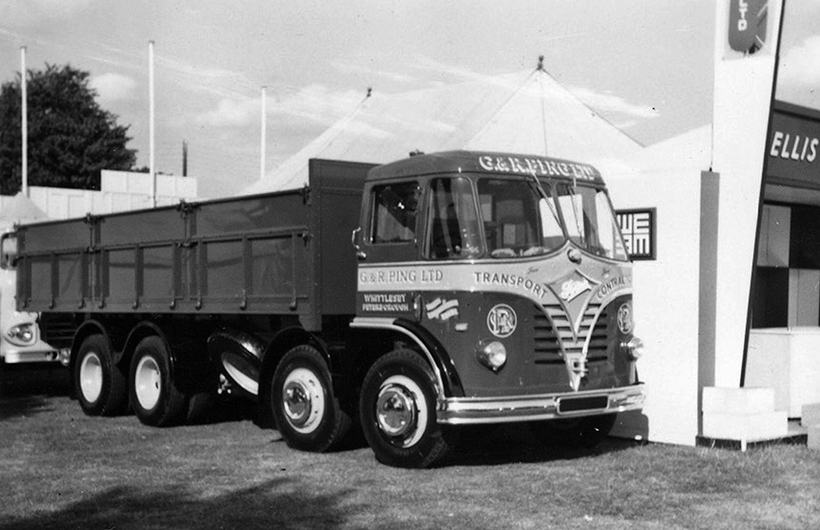 The original, five-speed gearbox was replaced by a new 12-speed Foden, non-synchromesh transmission, with overdrive. In addition, the 4:8 diff was replaced by a 5:2 example. The original 10.45-litre 6LX six-cylinder engine was retained so, while the vehicle’s gross weight capability went up from a 24-tonne eight-wheeler to a 32-tonne artic, it still only had 150hp and 485lb/ft of torque to play with.

Heavy metal!
The truck, understandably, has no power steering and, with just 150hp on tap, at 32 tons it was lucky to get above 40mph! David says: “When it gets going, though, it’s quite good, but you certainly need some muscles to get it to start moving as you go through the gears!”

It also only had a day cab so, if the driver ever needed to bed-down for the night – which was often the case on those longer trips to Scotland, then it was the old, tried and tested, primitive ‘board across the engine hump’ scenario!

Because the Peterborough registration authorities (1968 was pre-DVLC/DVLA, when vehicle registration was handled by local authorities, on behalf of the Ministry of Transport. Ed) regarded the S20 as a ‘new’ vehicle after it was written-off, and rebuilt at the factory, it insisted the original log book be destroyed and duly issued a new one which saw it registered as PEG 420G. Given the S20 model had long been usurped in the Foden catalogue, it’s probably fair to say it was the only one of its type to run on a G-plate. 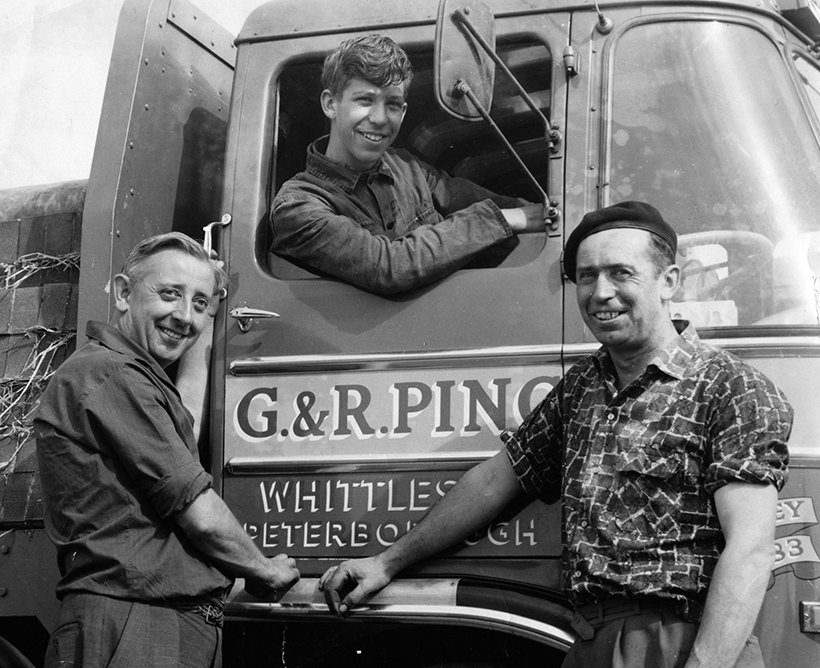 David (in the cab) was keen to get an S20 back in his ownership.

The truck was out-shopped in the same, original livery of Ping’s – blue and yellow. This colour scheme was quite bright for the 1930s, ‘40s and ‘50s, when most haulage contractors had single colours – typically featuroing darker greens and blues. The Ping livery certainly stood out then, as it still does now!

The S20 was worked hard until 1974, by which time it was not only showing its age, but also its limitations as engines became bigger and more powerful and traffic speeded up. As Ping’s grew and updated its fleet, still relying heavily, but not exclusively on Foden trucks, PEG 450G was retired from frontline use, although that wasn’t the end of its working life. It was packed off to the nearby brickworks, to act as a yard shunter where it took a true hammering! 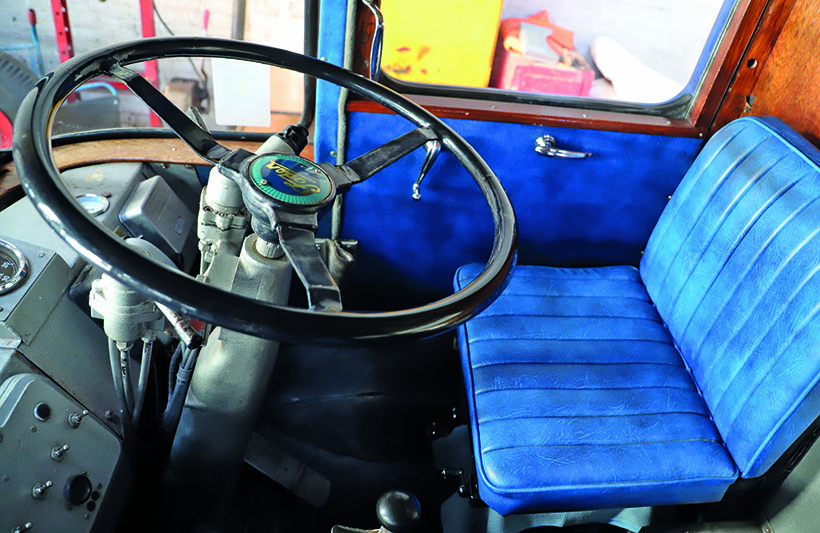 There is no power steering in a 1950s Foden!

The road to restoration
It returned to the yard and parked in 1980, where it deteriorated until it was sold to Viv Harper of Wisbech, for £500. He undertook a thorough restoration, and even returned the lorry to a period registration – PRP 720 – which it still carries today.

Viv sold the truck in 1998, when it was acquired by John Maitland, from Trabboch in Ayrshire. He had it repainted in an attractive maroon and red livery and then, in May 2006, it was on the move again. This time it was sold to Charlie Bowyer, from Congleton, near Stoke. He retained the truck’s existing livery, and took it to many shows and on road runs across the country; driving it to all these events! Charlie sold it to Foden aficionado David Jones, from High Peak, in Derbyshire, but he sadly died in 2019, which presented David with the opportunity to buy the lorry and bring it ‘home’ to Whittlesey. 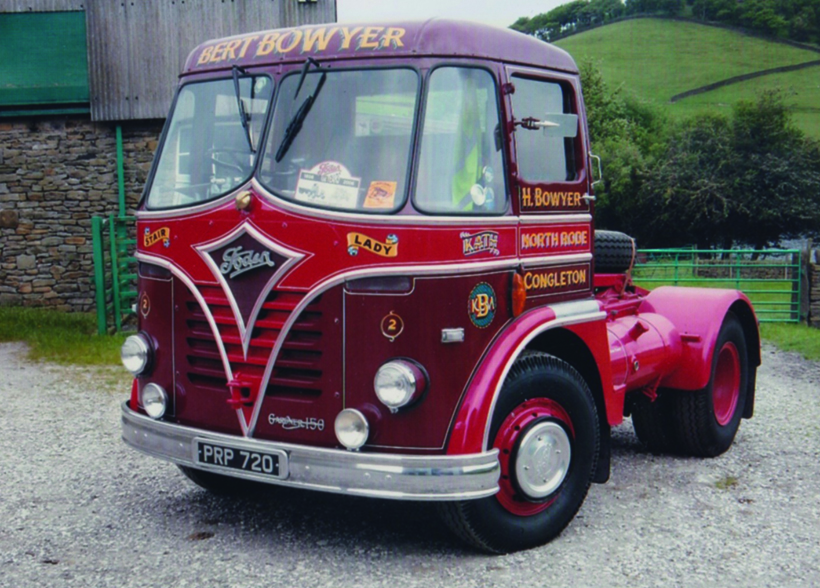 The S20 had a spell in Scotland, for shows and rallies.

By that time, it was in a sorry state, having not run since 2011. So, just before Christmas 2019, David borrowed a low-loader and brought the truck back. Despite having stood, unused for so long, it only took three cranks of the engine to get the old Gardner to fire into life – and even all the instrument lights lit up! Sadly, the heater didn’t work!

It was restored and repainted in its original livery, and the results speak for themselves! The cab has been restored to a true 1950s wagon. The timbers of the original coach-built cab had suffered a bit of rot, but a local carpenter and David got to work to rectify it. The chassis was remarkably rust-free, and was sprayed red which really goes well with the blue and yellow of the cab.

Family effort
David and his grandson, Ben, did the mudguards and chassis work, while John Thomas at Guyhirn, stripped the cab and resprayed it. The intricate – and traditional – sign writing was undertaken by a gentleman in Brampton, and that alone took four days, but was worth the wait! 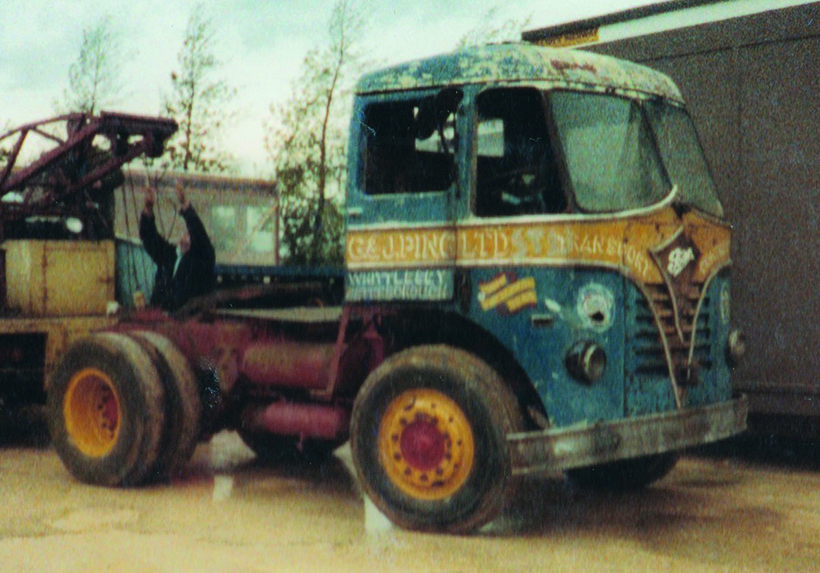 The truck fell into disrepair, making its restoration all the more impressive.

The lorry was finally finished in November 2020, and is now fully road legal. It’s been out and about on a few local runs, and it’s fair to say that David is very keen to get it shown-off to a wider audience. He plans to start attending shows and road runs just as soon as that becomes possible again, following the pandemicr post-pandemic.

The Foden delivers an impressive 9-10mpg in its present form. “It will cruise at 50mph, but I prefer to hold back at about 45mph,” laughs David. “I avoid motorways – you don’t want to be on one in this, slowing everybody else down!”

He says the brakes are ‘very good’ as the truck was one of the earliest models to have air brakes, the S18 predecessor having fluid brakes. “It’s very noisy in the cab, but it’s bearable although you can’t hold a conversation! It’s a few more decibels than our Scania! It’s only got a thin tin cover over the engine, with no insulation!” 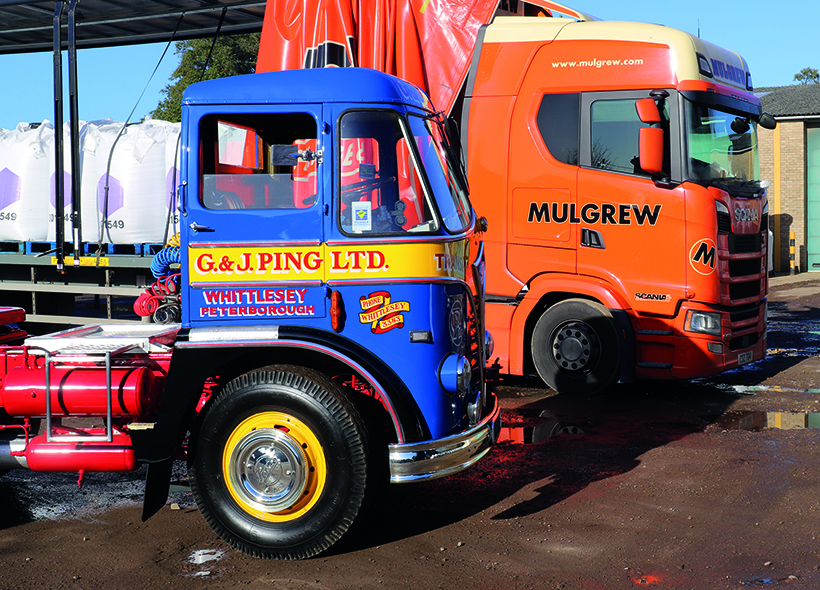 When compared next to a modern Scania S Series, the Foden appears tiny!

And still to come…
If there’s one thing better than a fully-resurrected, 1958 tractor unit, it’s a restored tractor unit with a restored trailer, and that’s on the way! David managed to find one of his old firm’s original trailers in a local field, and was able to negotiate its acquisition!

It’s a two-axle York flatbed trailer that’s now in the workshop being prepared, and it’ll give him a fully-restored period artic truck. “That should be ready in 2021. It has the old chassis style with diamonds cut into it. It makes a very strong but also a very light trailer. They are quite rare these days.”

The trailer dates from 1967, and was with Ping’s until it was sold to a local farmer and used for the storage of straw. “I had been aware of it for several now, and bought it last September.” 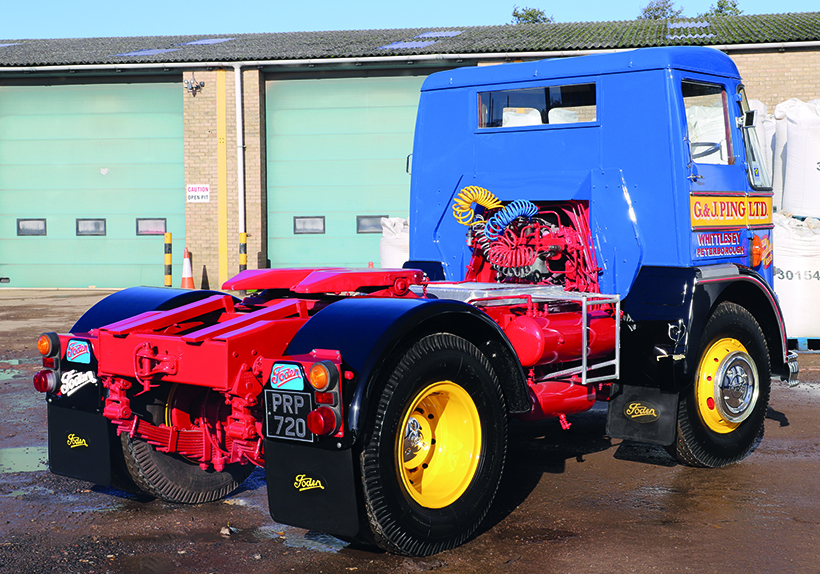 When the trailer is finished, the complete outfit will really look the part. In fact, any film companies out there looking for a period, 1960s truck, well, this could be just the thing for them! However, David adds: “My grandson, Ben, says he’ll never sell the lorry! I’d been after an S20 for ages. I was offered one in Cornwall, but I really wanted one of our old ones!” And that’s exactly what David got. He’s now 72 and, while running the yard and warehouse still keeps him busy, you can tell that his passion for this old lorry – that’s only 10 years younger than he is – remains as strong as ever. 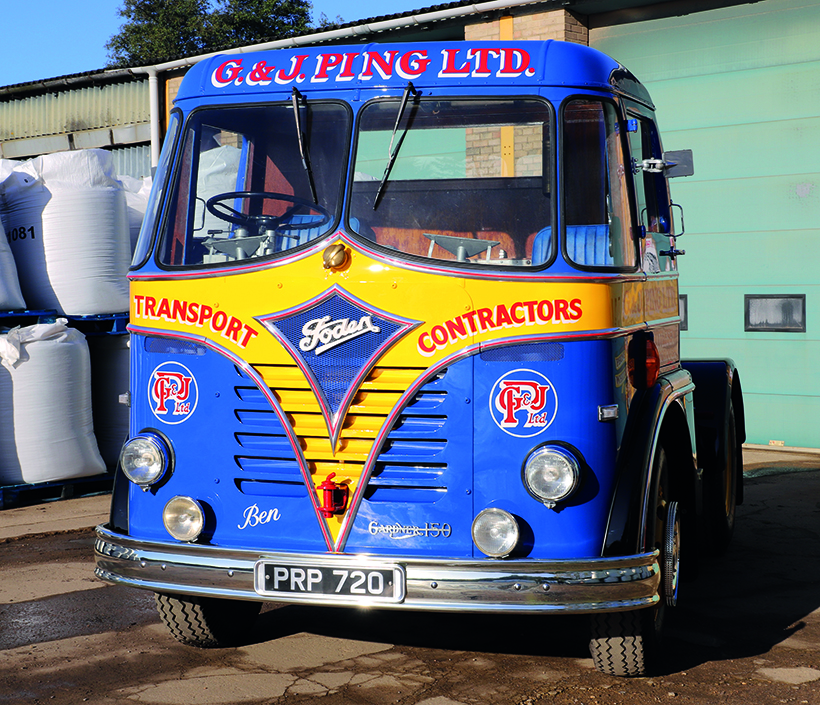 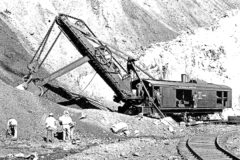 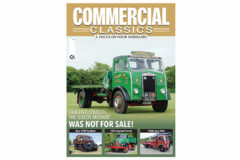