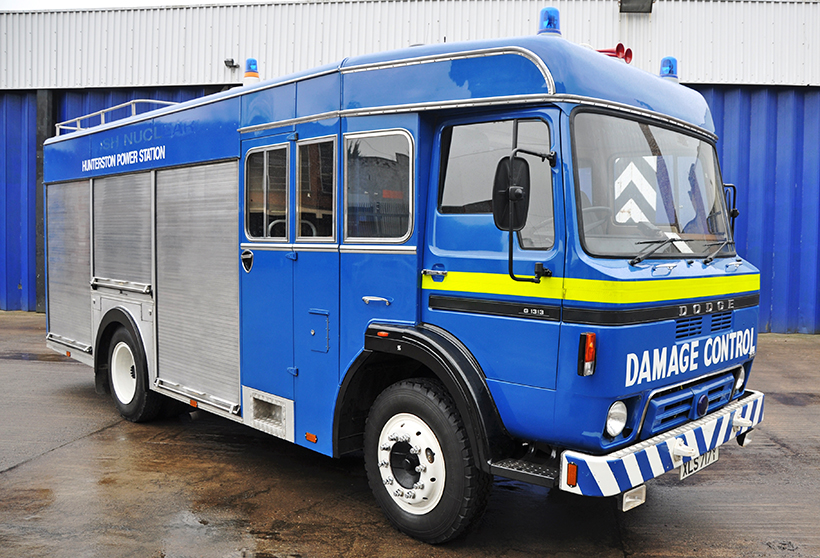 “Although their safety record in the UK has so far been exemplary, an incident at a nuclear power station could have far-reaching implications,” said Oscar Blue’s owner, Jim Smith. Accidents like the 1986 explosion at Chernobyl, in the old Soviet Union, are a sober reminder of the serious consequences when things go wrong.

Jim is a founding partner of Kerr & Smith, one of the largest Vauxhall franchises in the west of Scotland. He was also a volunteer fireman for 35 years, and was awarded the Queen’s Fire Service Medal upon his retirement. He likes steam engines and old commercial vehicles, and owns one of the finest private collections of fire appliances in Scotland. He recently opened a private museum to display his collection, and enthusiasts are welcome to visit by prior arrangement. 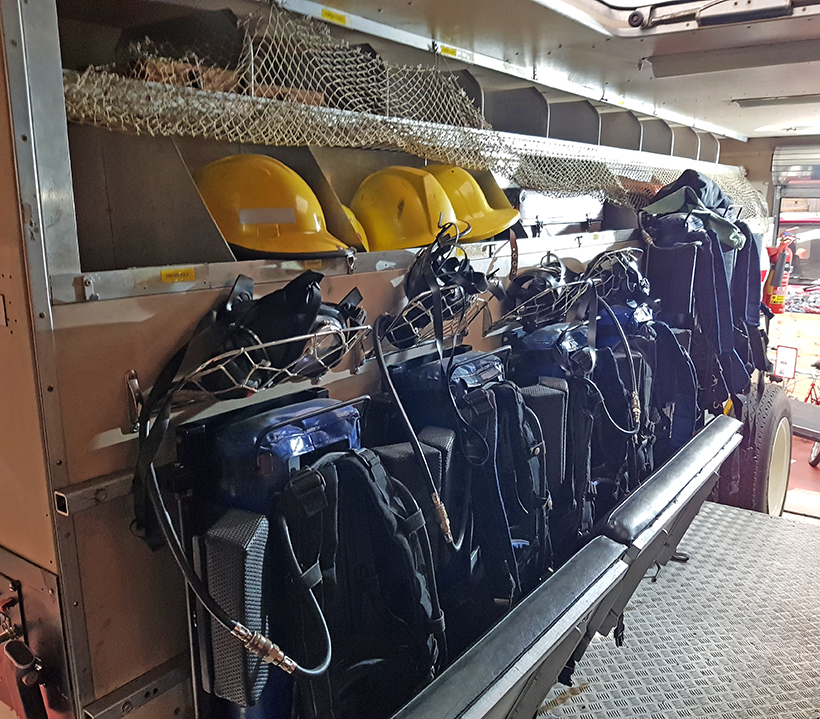 Nuclear experience
His friend, Tom Park, knows all about the nuclear industry, as he worked at Hunterston Power Station for many years. Tom was also part of the design team, who were responsible for Oscar Blue.

“The Hunterston Power Station project began in the early 1960s, and was Scotland’s first civil nuclear generating station,” he explained. “Hunterston A was a twin reactor Magnox power station, and each of the six turbines was capable of generating 60MW of power. When the facility opened, it was the largest of its type in the world.” 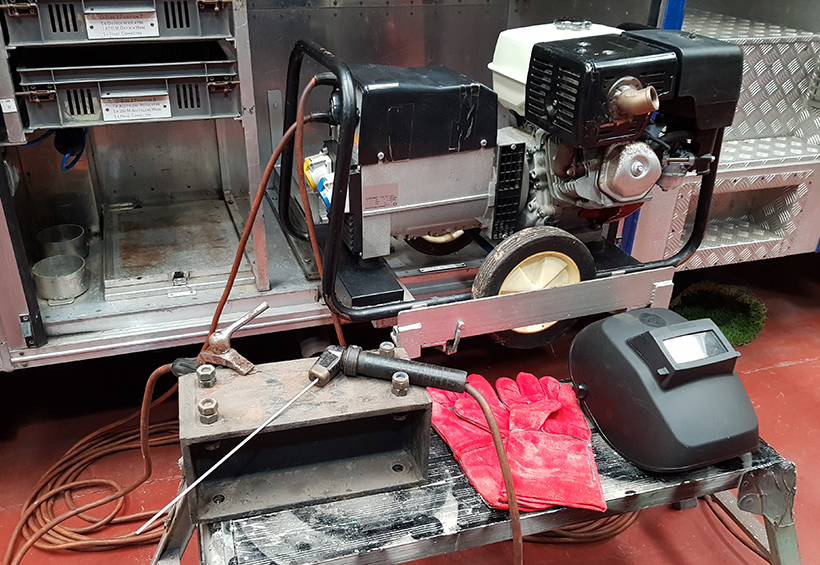 The power station started producing electricity in 1964, and was closed down in 1989. The site was run by several operators during its lifetime, including the South of Scotland Electricity Board (SSEB) and Scottish Power. Magnox Ltd (Magnox North) is in charge of the plant’s decommissioning.

Construction work began on Hunterston B in 1967, and the facility started generating electricity in February 1976. The power station currently has around 500 staff and 250 contractors working on site. Defueling is planned to commence in 2022, as the first step in the decommissioning process. 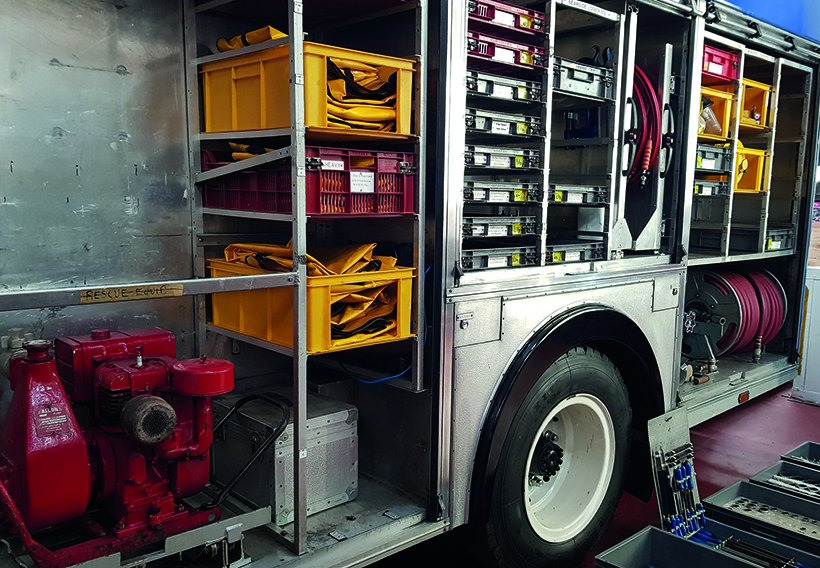 Historically, Hunterston A and B have been home to various emergency response vehicles. Back in the 1970s, Hunterston A used a selection of site vehicles and four-wheeled trailers. Unfortunately, a lot of the equipment was becoming dated, and didn’t include a specialist towing vehicle. 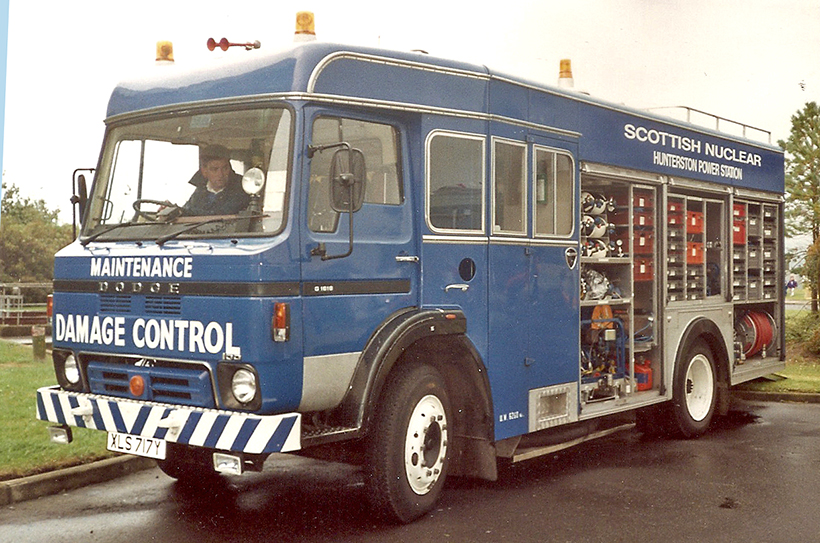 The Dodge on a training exercise at Hunterston Power Station.

In the late 1970s it was decided to acquire a purpose-built ‘Damage Control Vehicle’. The Dodge G1313 (XLS 717Y) was ordered in 1980 by the power station’s then owners, the SSEB, and the appliance was finally delivered in 1982.

ffectionately known as the ‘Blue bus’, the vehicle was designed by Brian Stockdale and Willie Burns at specialists, Fulton and Wylie, based just down the road in Irvine.

“During the 1970s, Fulton & Wylie were major suppliers of Scottish fire appliances, until the company closed in the early 1990s,” Jim explained. “It produced a lot of fire engines for various Scottish fire brigades. The conversion of G1313 was considered ahead of its time and, subsequently, other emergency services used the Dodge as a model for their own command and control vehicles.” 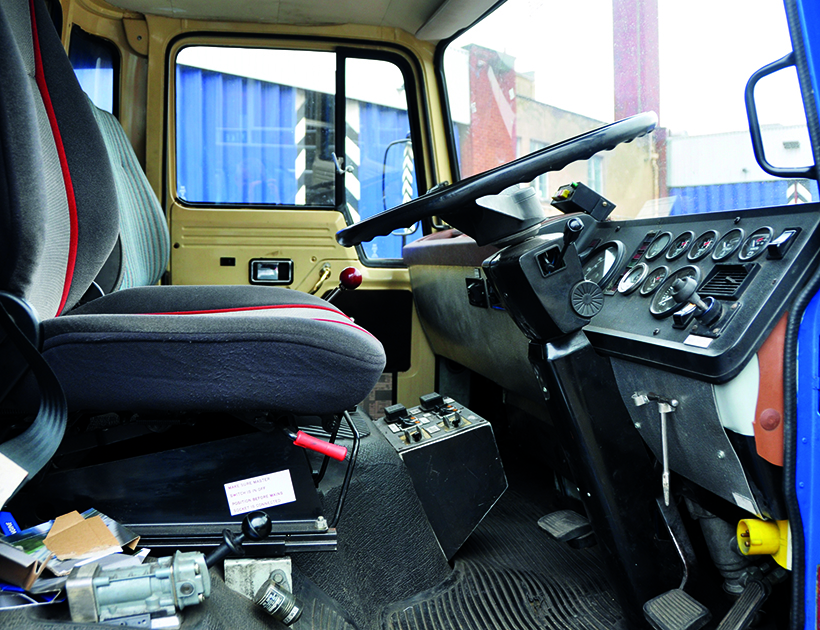 A well laid-out cab, with everything to hand.

The Dodge was powered by a Perkins 540 V8 diesel engine, and given the call sign ‘Oscar Blue’. The vehicle’s unusual colour scheme was a deliberate policy, to differentiate it from the power station’s standard fire appliance.

Calling Oscar blue!
“The radio call sign ‘Oscar’ was the official station call sign for the emergency teams, as issued by the government Office of Communications,” Tom Park explained. “Oscar Red was used by the Fire Team, and Oscar Blue the Damage Control Team. Acceptance testing of Oscar Blue involved a non-stop 48-hour test run, with all equipment being checked and recorded. Once it was operational, the appliance was housed in the fire station, and manned by the power station shift engineering team, which was were ‘turned out’ via personal pagers and the station tannoy system.”

An essential requirement for Oscar Blue was that the vehicle should be capable of carrying a crew of 11, including the driver. It was assumed that the crew would be wearing breathing apparatus, and the Dodge was equipped with its own tools, equipment and power supply. 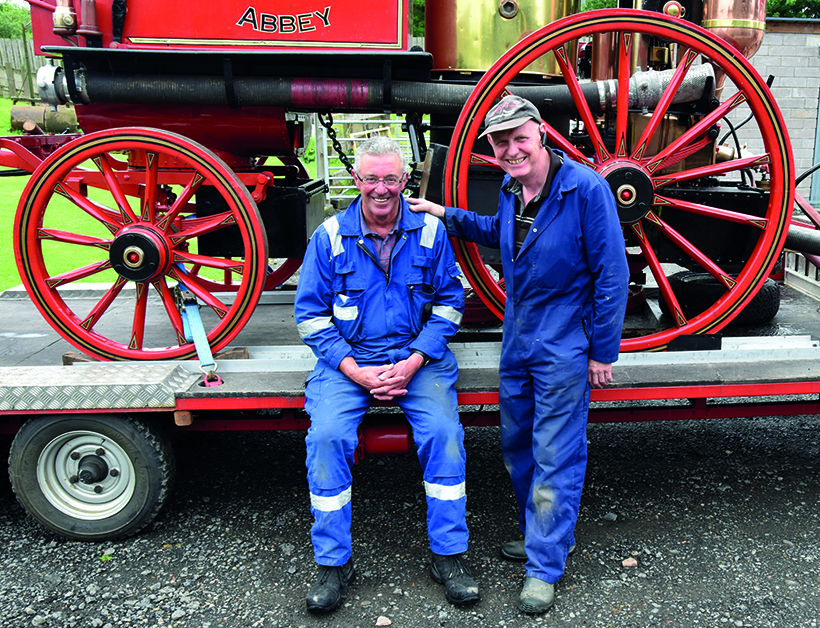 Tom Park (left) and Jim Smith. Tom worked at Hunterston Power Station, and helped with the specification of the Dodge, while Jim has one of the finest, privately-owned collection of fire appliances in Scotland.

“These specifications were unusual for a vehicle of this type, and Fulton & Wylie had to use all its skill and experience to complete the job,” said Tom. “In the end, it increased the length of the chassis by one metre, to provide the extra crew and locker space. A lot of thought also went into the seating arrangements. It was decided to sit three of the crew in front, with four members facing the rear and an additional four in an internal tunnel. The rest of the tunnel was used to store equipment.”

A rear, ‘drop down’ ramp was added to provide a safe exit from the vehicle for both crew and equipment. Three external lockers were fitted to each side – designed to carry a particular item – and were of a modular design so they could be changed as required. Folding ladders and clean-up equipment were secured on the roof, with access via an external, fixed ladder at the rear of the vehicle. 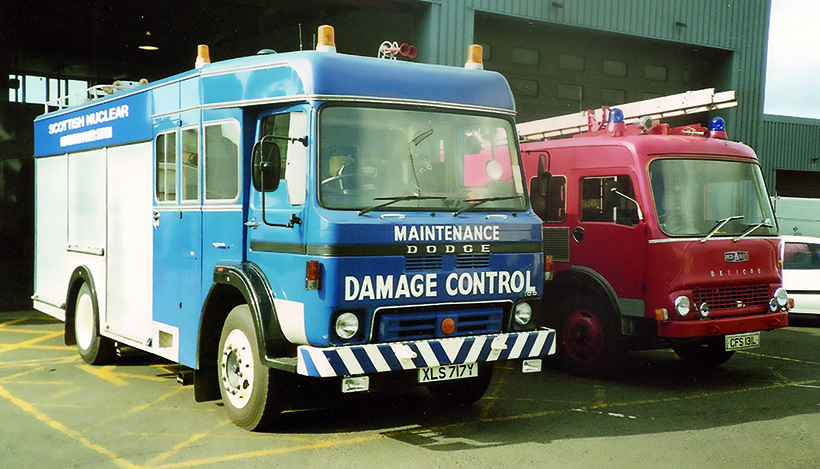 The Dodge and Bedford on duty together.

Progress checks
“While the Dodge was being prepared, the power station engineers made weekly visits to the workshops in Irvine,” Tom recalls. “They altered the specification on several occasions, but the staff at Fulton & Wylie took it all in their stride.”

The vehicle is equipped with two PTOs (power take-offs); one to drive a hydrovane compressor, and the other a 110V power-mite alternator. The area around the vehicle was illuminated by a stem light on the roof, equipped with 4x500W lamps. There were also 110v power socket outlets on both sides of the appliance. Combined with its own air supply, this gave the Damage Control Vehicle the capability to operate all its tools and equipment on a ‘stand-alone’ basis. 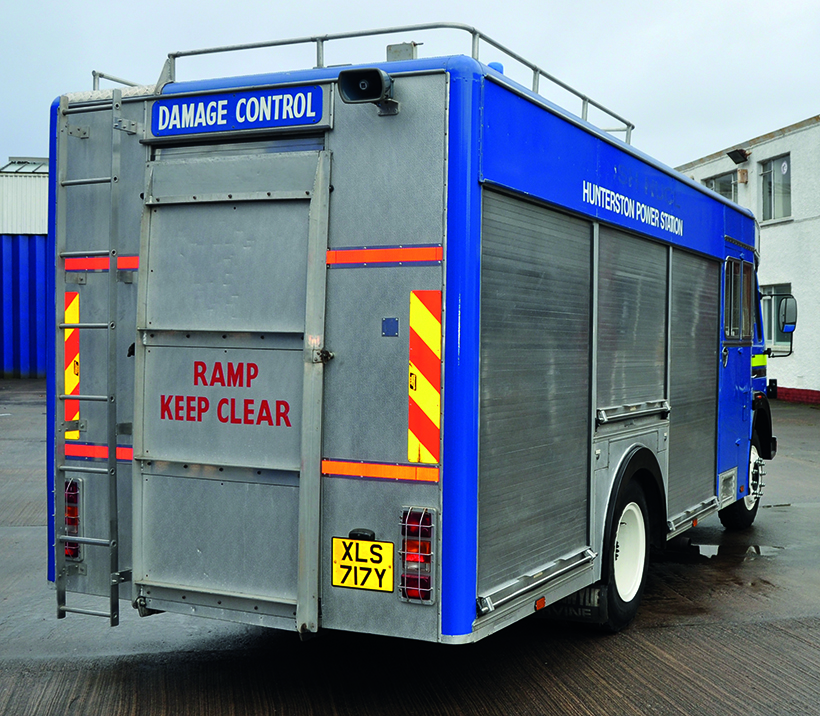 The appliance had its own, purpose-built ramp to ensure a safe exist for the crew and equipment.

“Every effort was made to make sure that the ‘Blue Bus’ was fit for purpose,” Tom Park explained. “The equipment included oxy-acetylene burning gear, which was installed in the rear tunnel section. This was also home to all the hoses, PPE (Personal Protection Equipment) and ancillary equipment.

“A portable, electric welding generator was fitted to the off-side front locker, and all welding cables, rods and associated equipment were stored adjacent to the welding machine. A portable electric generator, with adaptors and extension cables, was stored in the nearside front locker. The warning lights were coloured yellow, instead of the traditional blue.”

A later photograph of the Dodge with the Bedford’s replacement, the Scania 93M.

Dedicated comms
Good communications were considered a priority, and both a radio system and tannoy were installed, and were fed by the vehicle’s own power supply. The radio operator was seated on the offside, rear-facing seat, and had control of the radio and landline communications. To help him with this task, he was provided with a drop-down desk, plus command-and-control mark-up board.

Once XLS 717Y had passed all its tests, the vehicle was officially commissioned as the site Damage Control vehicle. The site emergency response team completed their extensive training, and the vehicle was put ‘on the run’.

“Unfortunately for SSEB, the vehicle couldn’t be registered as an emergency vehicle,” Tom recalls. “The reason given by the Department of Transport was that the appliance didn’t carry water on board, or have a pump capable of delivering water under pressure. This was also part of the reason for the yellow warning lights.” 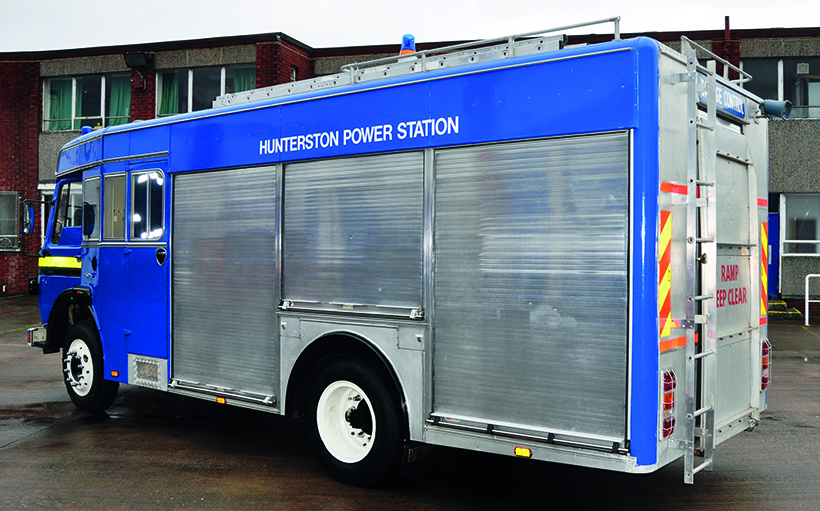 Damage control vehicles had a different purpose and specification from traditional fire appliances.

The ‘Blue Bus’ completed 30 years’ service, clocking-up a miserly 7,830 miles in that time. For a brief period, it was the only blue appliance of its type working in the UK. “Fortunately, it was never faced with a nuclear emergency, but the vehicle’s equipment and stand-alone capability was used on a number of occasions. The west of Scotland gets a lot of rain, and the vehicle’s ‘tunnel’ was the ideal place to shelter the crews.”

Finally, XLS 717Y was withdrawn from service in 2011, and replaced the following year by Renault and MAN fire appliances provided by the Ayrshire firm, Emergency One UK.

Preserving the Dodge was, however, considered a priority. It was initially given a home by the Scottish Fire Heritage Group (SFHG), and stored at the Glasgow Vintage Vehicle Trust’s HQ at Bridgeton, in Glasgow. Unfortunately, lack of space eventually became an issue, and Jim was happy to step in and give the Dodge a new home. He’s currently finishing the task of configuring the vehicle back to its former specification. 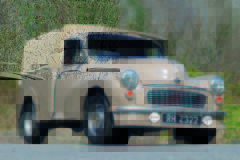 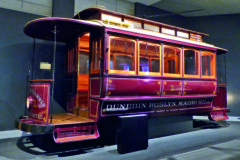