Russ Harvey enjoys the treat of seeing a pair of very rare, uniquely-styled Citroën GS-based vans from the 1970s.

All images included here are the copyright of Russ Harvey, and must not be copied or reproduced elsewhere without written permission from Russ Harvey and Kelsey Publishing. It was during 1972, a year after the launch of the GS saloon, that Citroën introduced the GS Break (Estate) and the Break-based Service vans. These latter models were available in three versions, a three-door van, a three-door glazed van plus a five-door Break Commercial. The service vans came available as two options; either as ‘Service Tolée’ or as a ‘Service Vitrée’, which translates respectively as ‘cladded’ (a van with closed steel sides), and ‘glass’ (a van with glazed side windows). However, the latter wasn’t classified as a van under UK tax rules of the time. These commercials were supplied without rear seats thus creating a cavernous load space. In fact, 59cf was available and could carry 440kg (8½ cwt); all-in-all creating a nice-sized light commercial. Some simple engineering saw the single-piece rear hatchback door that opened upwards, lifting away the middle section of rear bumper, thus enabling a flat floor level loading access, making loading and unloading so much easier. It was rumoured that a Citroen GS pick-up was to be added to the commercial range or at least being proposed; a few do exist and I’ve seen several in photographs. The conversion was linked to a construction/coachbuilder firm based in the south of France, called Boyer & Fils. However, it appears that it was not progressed. I did see one a few years back at the Classic Car Show at the NEC in Birmingham. It was said to be the only survivor in the UK but, as to who carried out the conversion on a GS Super model, that was unknown. But it looked ‘just right’ in my eyes! The five-door GS Break version was effectively the same as the five-door Estate, but came without the rear seat. It was all to do with taxation, as is usually the case. The GS service vans were used as the basis of specialist conversions such as police vehicles and ambulances. The GS Service van was sold in very small numbers in the UK and originally came supplied with a choice of engines. All were flat-four air-cooled, ranging from 1,015cc and 1,129cc to 1,222cc, and came equipped with three trim levels to match. Luxurious cab for a commercial and very futuristic controls in the GSA.

The Hydropneumatic suspension system was invented by Citroën, and designed by Paul Magès. Citroën used this hydraulic suspension with great success, it was adapted for the GS & GSA models. The system it was said at the time was so efficient at damping out road bumps that it enabled passengers to write legibly and to read fine print while the car charged at high speed over unmade, potholed roads!

GSA Service Van
The GS saloon was facelifted in 1979, given a hatchback and renamed the GSA. That naming also applied to the service vans. The main changes in appearance included revised grille, bumpers, taillights, hubcaps and exterior handles, all the chrome from the GS disappearing to black as can be seen in the photographs here. Internally a revised dashboard included the auxiliary controls on column-shaped pods so they could be reached without moving the hands from the single-spoked steering wheel! I think you will agree that it looks very futuristic indeed, and extremely plush for a commercial of that era. The GSA Service had only two engine options, the 1,129 or the 1,299cc. The van’s superb ride height and smoothness was controlled by the hydropneumatics suspension, designed to absorb bumps and it was, of course, front-wheel-drive with disc brakes all round. During 1981, the GSA Enterprise replaced the GSA Service vans, and production ended in 1987 with the launch of its successor, the BX. Another handy feature of the GS was that the system did away with the need to jack up the car to change a rear wheel. You merely operated a control inside that raised the body on the shocks; then you placed a specially supplied support under the appropriate jacking point and reversed the control. Since the car was unable to lower itself on the supported side, the wheel would rise instead. Simple but very efficient. Citroën logo meaning
We’re all familiar with the Citroën ‘Double-Chevrons’ logo, but are you aware of exactly what they symbolise? The design first appeared during 1919, and is one of the most well-known, iconic emblems worldwide, associated with engineering innovations. Introduced by the company’s founder and outstanding engineer Andre Citroen, the famous double chevron represented the paired helical gears that he developed and patented. It’s constant reminder to every other car maker that their products rely on a Citroen invention. Before the helical gear, gearboxes were noisy and constantly whining, with gears that were difficult to engage. Citroen, invented, licensed and produced the first helical gears, and their distinctive herringbone teeth provided the company with its first and enduring badge, that’s still worn with pride today! Citroën GS converted to a pick-up.

It was some time ago that I dropped in on Andrew Weston at Citroën independent specialist located in Cambridge, Gloucestershire, to see his GSA van, registered as FNP 409W. It is resplendent in the correct Citroën livery of yellow with blue lettering, with some superb signage that reads ‘Citroën A Votre Service’ which equates to ‘Citroën at your Service’. On the day I visited, an ultra-rare GS van was present, in for service, so I was able to put a GS and GSA side-by-side for comparison as well as photographs. This GS registered as HEU 282N used to be owned by Citroën Chevronic Motors, an independent specialist in Bedfordshire. It was imported from France and is left-hand-drive. GSA and a GS for comparisons.

Sincere thanks to Andrew for allowing me access to these superb Citroën GS and GSA vans. They are extremely rare commercials today as very few were sold on the UK market, so just admire the graceful lines of these futuristic-looking vans and ponder; when did you last see a GS van, let alone a pair of them then side-by-side? This feature comes from the latest issue of Heritage Commercials, and you can get a money-saving subscription to this magazine simply by clicking HERE 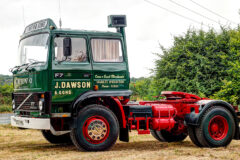 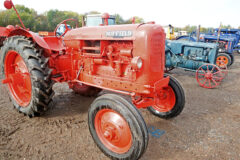