Mike Forbes has selected a number of photographs of classic Bedfords at work, from the Chris Hodge Stilltime Collection. 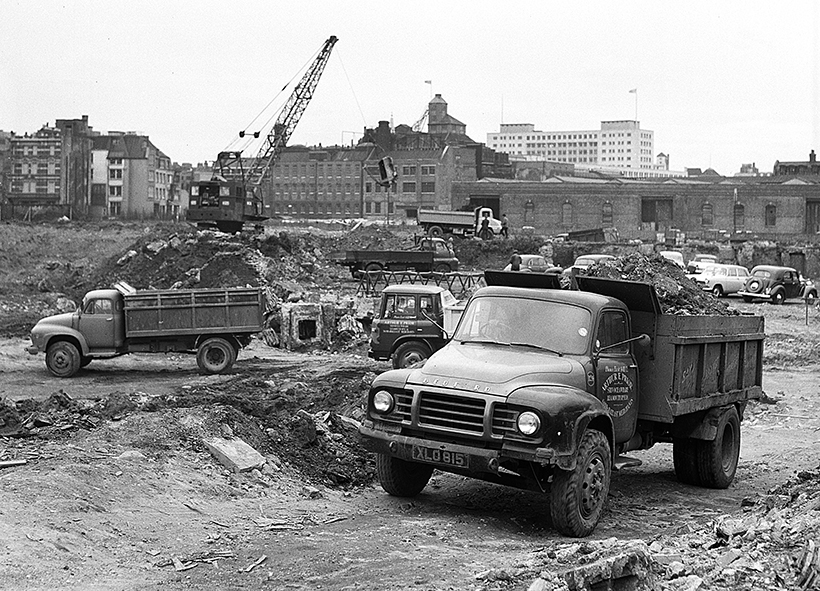 Classic Bedfords at work: One of a number of photos taken in late 1962, showing the clearance work on the former bomb site in the City of London being done for the famous Barbican Estate in EC2. Bedfords seemed to out-number other makes on this job. Here we see a TJ Series J5S tipper, XLO 814 (London, 1959), fleet no 124 of sand and ballast merchant, Arthur E Prior of Silvocea Wharf, Leamouth Road, E14. Its eight-cubic-yard steel body had ‘greedy boards’ added, to contain the good load it was carrying. Behind is a similar vehicle and a Bedford TK tipper, a Bedford S Type dropside and a Thames Trader tipper. The vehicles were working hard – note the damaged bumper – moving spoil removed by McAlpine’s NCK5 dragline.

‘You see them everywhere’ was a slogan adopted by Bedford in the 1930s, and it seems particularly appropriate here, as there are many images of Bedfords to choose from in the archive. As well as the inevitable views of new vehicles at shows and on test, plus the Lorry Driver of the Year events, there are many shots of Bedfords working, from which I’ve selected the cross-section seen here.

It seems Bedfords were popular with all sorts of commercial vehicle operators. This was hardly surprising, since they combined low unladen weight with the ability to carry much the same loads as lorries from the ‘quality’ makers of more bespoke vehicles, and at a lower price. With its Bedford brand of commercials, Vauxhall Motors was arguably in the lead among the ‘mass producers’, making vehicles which stood up to plenty of punishment. Before such practices were seen as unacceptable, Bedfords were reckoned to be good for a significant measure of overloading. No wonder that they became popular.

I’ve included a spread of photos dating from the 1930s to the 1970s and should add that I, like many others, was among those who were both surprised and disappointed when General Motors announced that no more Bedfords would be built from 1986. The attempts to revive the range after that seem to have been doomed, thanks to the influx of Continental vehicles and a significant change in the marketplace. Perhaps that’s why so many of us look back with fondness to the simpler-seeming times, when Bedfords could be found in so many fleets, large and small… 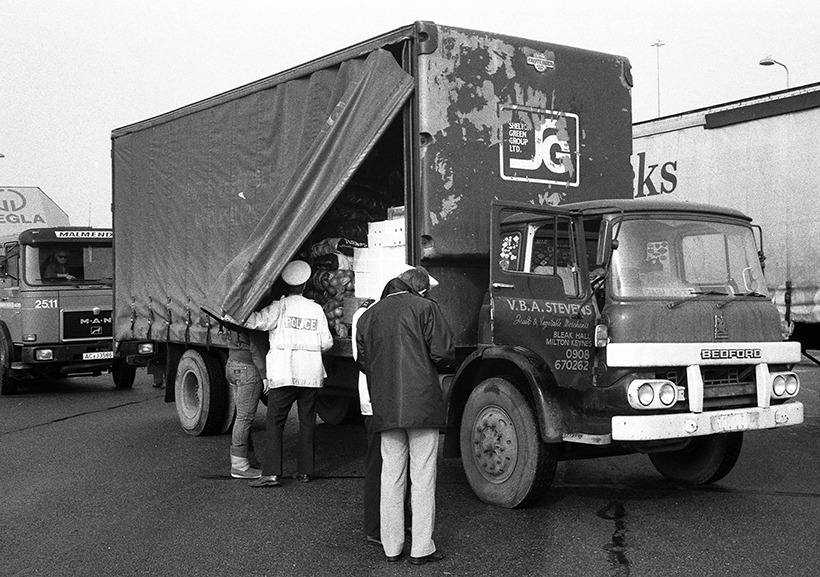 It’s no surprise that this lorry was stopped in a police check, with the front number plate stuck behind the screen, and a generally unkempt appearance. What looks like BNM 143T (Luton, 1978) was a Bedford KM 16-tonner, of VBA Stevens, fruit and vegetable merchant, of Bleak Hall, Milton Keynes, with a Boalloy ‘Tautliner’ body, marked Shelton Green Group Ltd, still putting in a day’s work hauling produce home from Covent Garden market no doubt, when stopped on the M1. 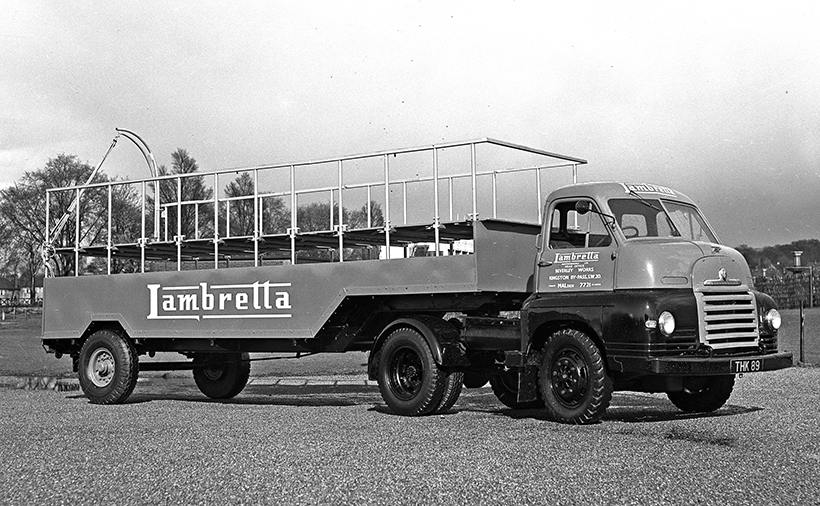 This early ‘Big Bedford’ S Type artic, probably still petrol-powered, THK 89 (Essex, 1951), is seen with an interesting, two-tier, step-frame trailer, in the livery of Lambetta Concessionaires, based at Beverley Works, New Maldon, on the Kingston by-pass. It must have just been reconditioned when photographed, as another shot shows a new Lambretta Li150 model scooter, from around 1959, being loaded using the derrick at the rear of the trailer. 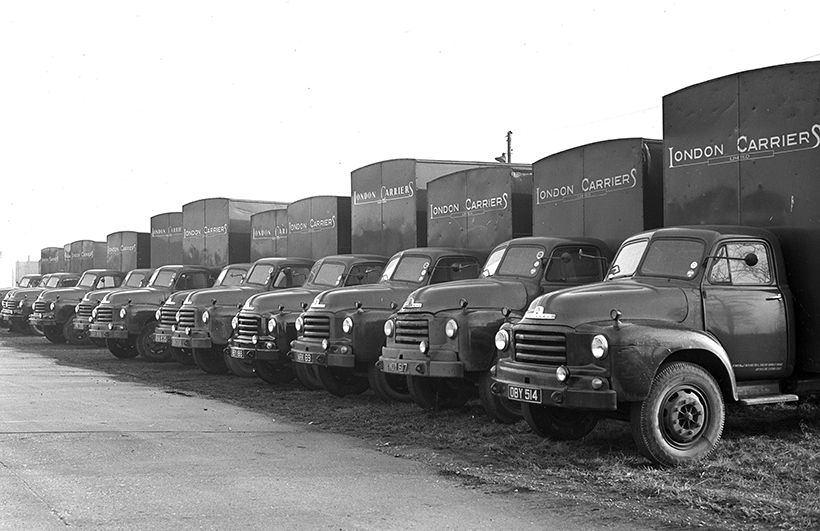 Not actually working, but parked up at London Carriers’ base at Beddignton Lane, Mitcham Common, because of a strike. The company was the transport arm of radio and electronics maker, Pye Ltd, which meant its green (then grey and blue) vans were seen at the Pye television factory in Lowestoft. London Carriers ran a lot of Guys, as well as Bedfords, like the line of TA box vans seen here, with OBY 514, MOY 617, NRK 69, RBY 188 (Croydon, 1954-56) and many more. 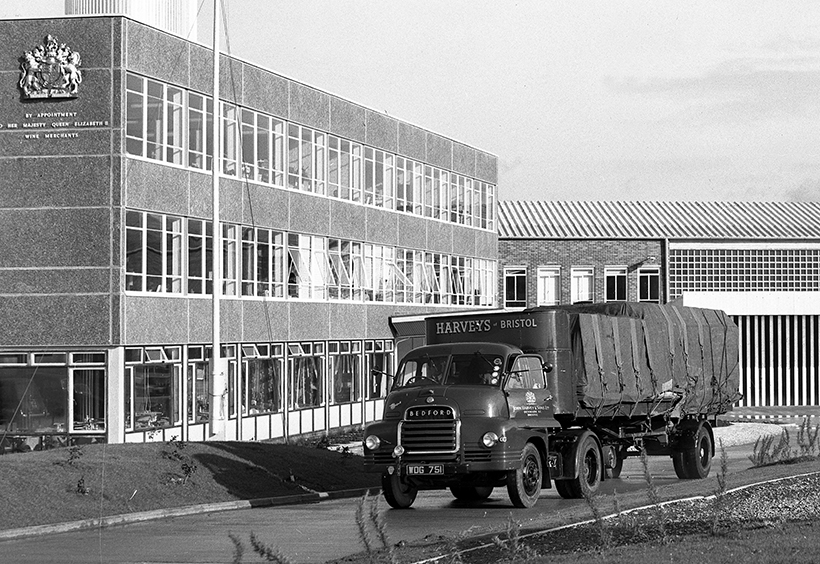 Many, well-known companies had Bedfords in their fleets. Here we see a later S Type of Harveys of Bristol, noted for its sherry. WDG 751 (Gloucestershire, 1959) was photographed leaving the company’s works, with what looks like a Carrimore trailer, with a rounded headboard – was it built as a van? For some reason, the well-roped, strapped and sheeted load was overhanging the side raves. 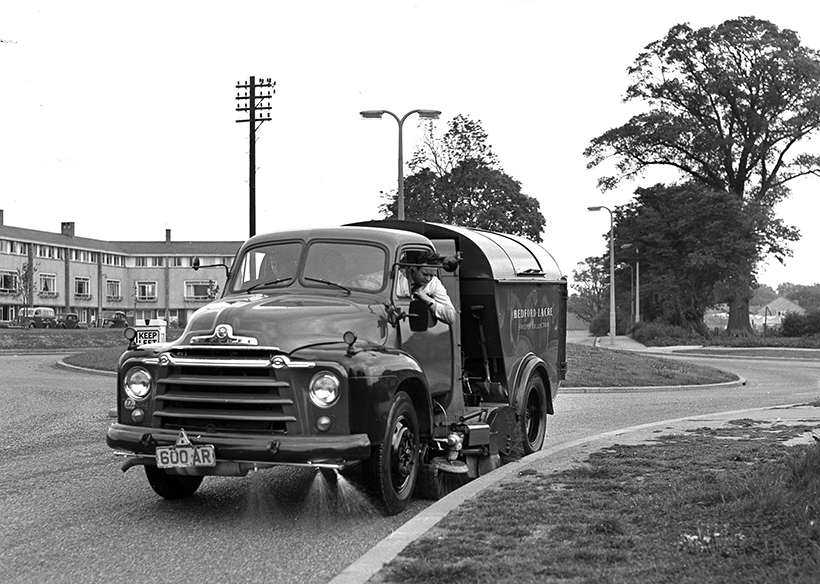 Another vehicle not strictly in the spirit of the title, but it’s seen working. Bedfords were always popular with local authorities. Rather than the more usual tipper, this D Type was a Bedford-Lacre ‘Sweeper-Collector’ demonstrator, running on Hertfordshire trade plates, 600 AR, when photographed, possibly in Letchworth, where the body and equipment was built, the driver hanging out of the window to watch the action. 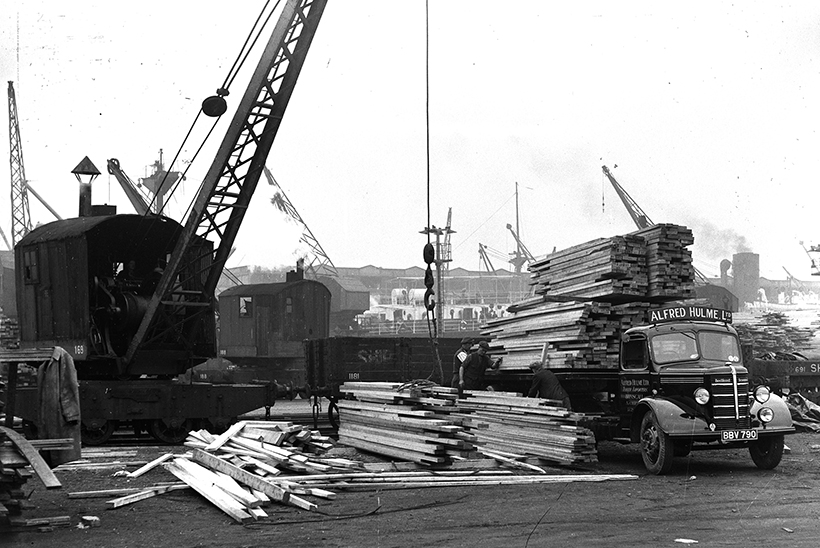 What was I saying about overloading? Seen at Manchester Docks (note the Ship Canal railway wagons in the background), this smart-looking Bedford-Scammell ‘OSS’ artic unit, BBV 790 (Blackburn, 1946), of Alfred Hulme, timber importers, of Brinscall, near Chorley, was taking on quite a load of sawn timber on its platform trailer. 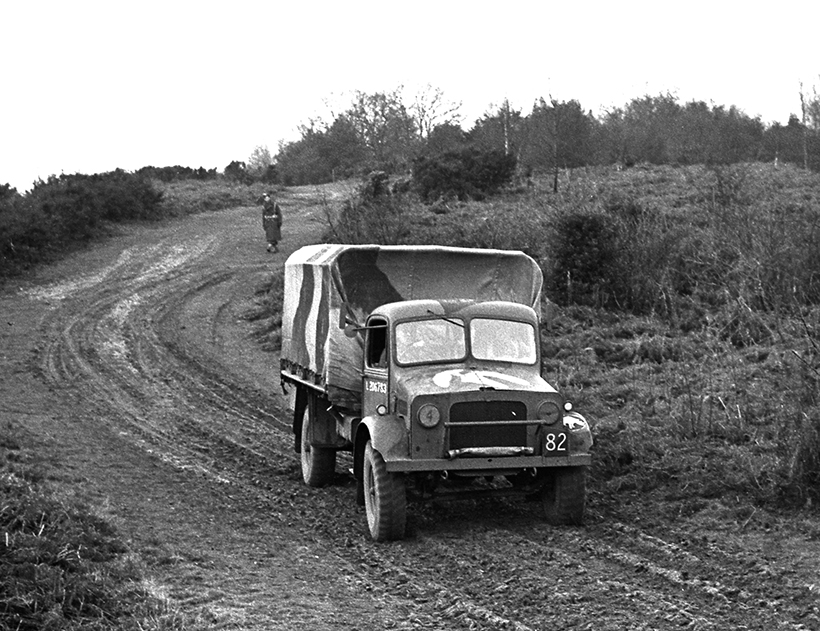 As a reminder of Bedford’s contribution to the war effort, here we see an OYD three-tonner taking part in a demonstration in which various types of ‘soft-skin’ vehicles from several different makers, were being put through their paces. 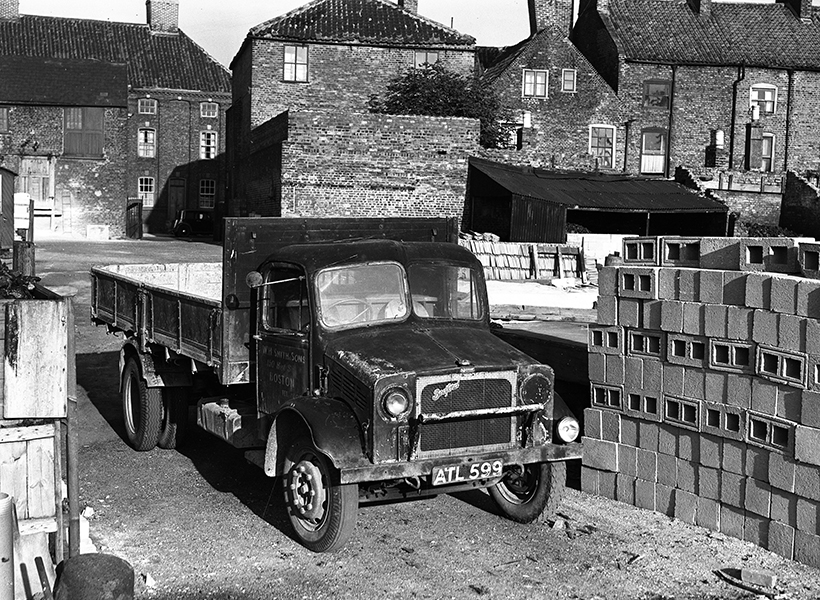 Some Bedfords were also delivered to civilian operators during the war, like this OWL dropside, with just a single headlight, ATL 599 (Kesteven, Lincolnshire, 1944), looking rather unloved by WH Smith of Boston. The breeze blocks and tiles suggest this was a builder, but the company also seems to have run a Scammell Mechanical Horse, so was more likely a local haulier. 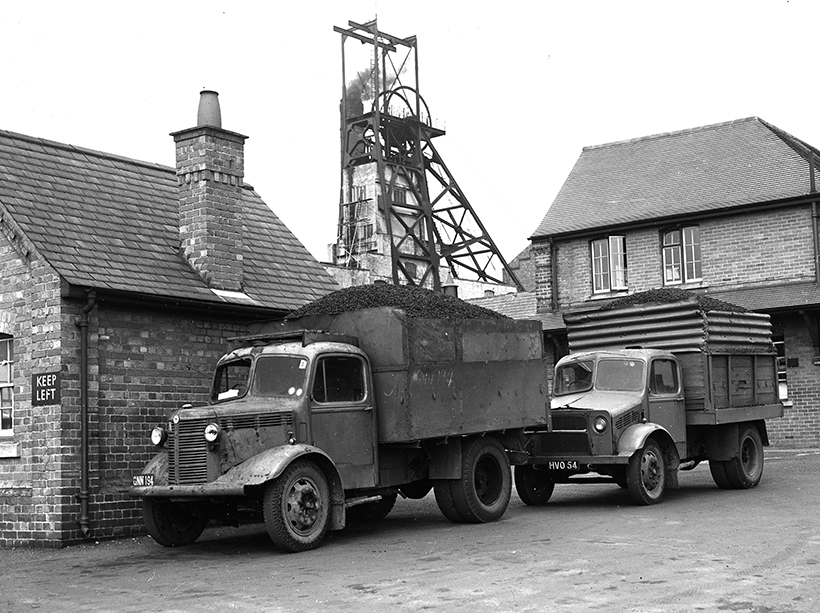 A comparison between the wartime OWST and post-war OST Bedford tippers, except the Nottingham registrations, GNN 184 and HVO 54 date from 1944 and 1947 respectively – the wrong way around. Do we suspect a ‘ring-a-ding-ding’, to quote an old motor trade term I once heard? Back in the early, post-war years, when these well-worn vehicles were helping Britain get back on its feet, maybe it was a case of ‘anything goes’. They both had oversize tyres on their rear axles, but must have worked hard with the load in those rather primitive, high-sided bodies, even if it was coke not heavier coal… 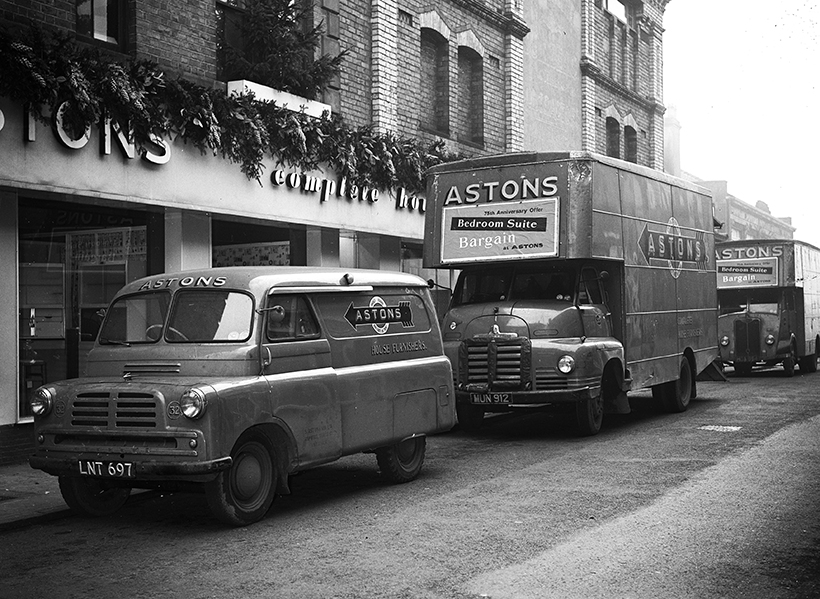 Astons, with headquarters in Wrexham, is still in business as a ‘complete house furnisher’, offering its products ‘direct from factory to you’. In the 1950s, the company’s mixed fleet included vans based on Guy, Thames and Bedford chassis, including this CA van, LNT 697 (Shropshire, 1954), and diesel-powered S Type Luton van, MUN 912 (Denbighshire, 1955), seen outside one of its shops. 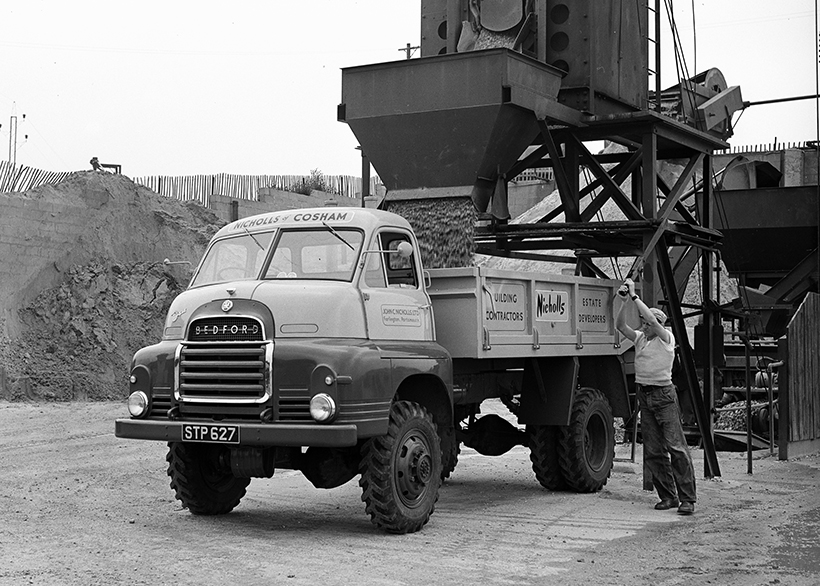 The Bedford RL was well-known as a military three-tonner, its four-wheel-drive offering good cross-country performance. The model was also sold in the civilian market. Building contractors and estate developers, Nicholls of Cosham, Portsmouth, had diesel-powered STP 627 (Portsmouth, 1959), featuring the lowered headlights and later-style grille, as well as twin rear wheels. It was photographed being loaded with sand for an off-road test, for which those track-grip tyres no doubt proved ideal. 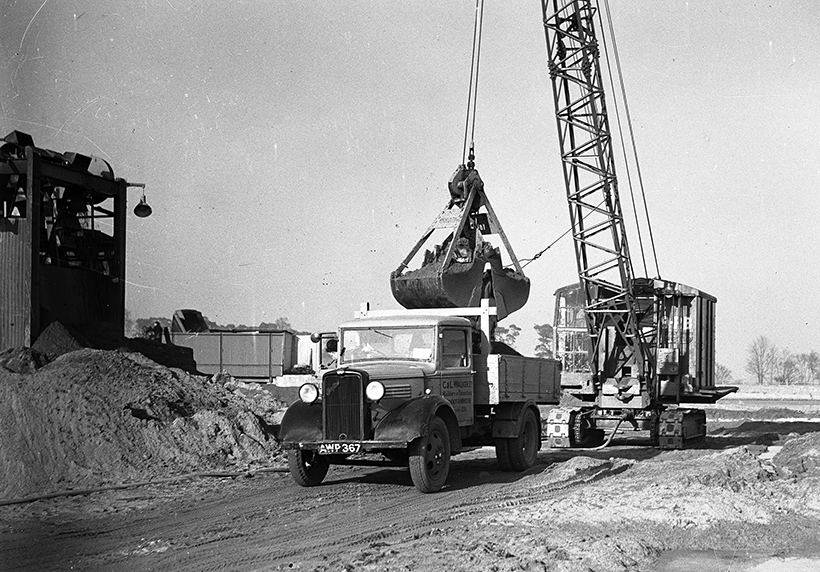 An earlier, Bedford tipper being loaded at a quarry; AWP 367 (Worcestershire, 1936) of C&L Walker, builders and decorators, of Kidderminster, was a WHT model, designed for three-ton loads, but looks as if it was taking on more than that here… 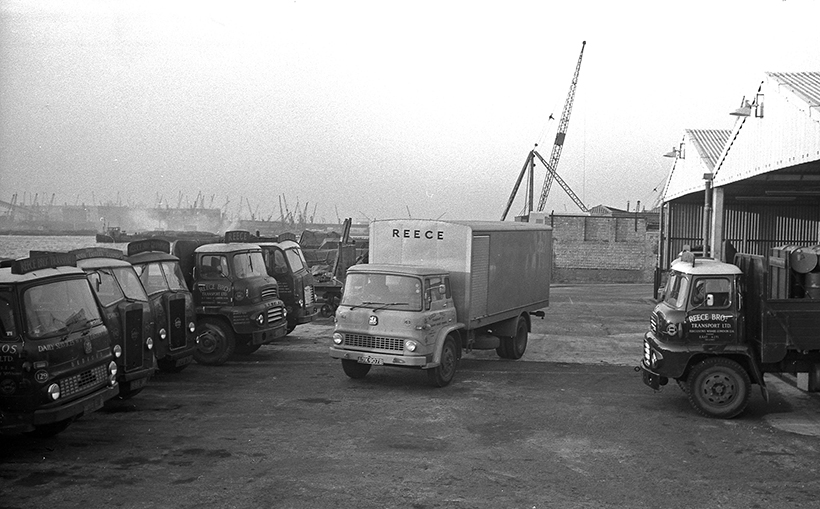 The 1964 Ipswich registration of Bedford TK box van, ADX 907B, upholds my memory of Reece Bros as an Ipswich company, but here the new-looking vehicle appears to be meeting others in the company’s mixed fleet of Bedford, Seddon, Leyland and Thames lorries, based at Ferguson’s Wharf on the Isle of Dogs (now a block of flats), from where the company ran daily services to the eastern counties, notably from Covent Garden market. 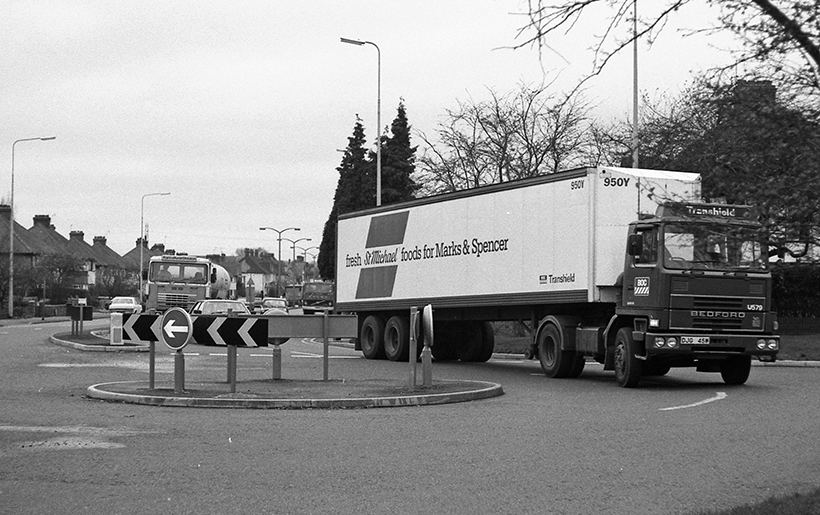 This photograph was taken in the early 1980s, in a series of views showing heavy traffic on suburban roads. It was actually on the A240 through Ewell, looking towards the Kingston by-pass, part of an important route around the south of outer London, before the M25 changed everything. A Bedford TM 32-tonner, fitted with the narrow version of the cab, with a tandem-axle van trailer, DJG 45W (Canterbury, 1980), of BOC Transhield, is seen negotiating a roundabout, followed by a Seddon-Atkinson 400 in ICI colours and a Marley Tiles Volvo F7. Known as Gist since 2001, BOC Transhield, then Distribution Services, resulted from the company’s interest in 1970 in GL Baker’s use of liquid nitrogen in chilled containers. This company had been delivering fresh produce to Marks & Spencer since the 1930s. 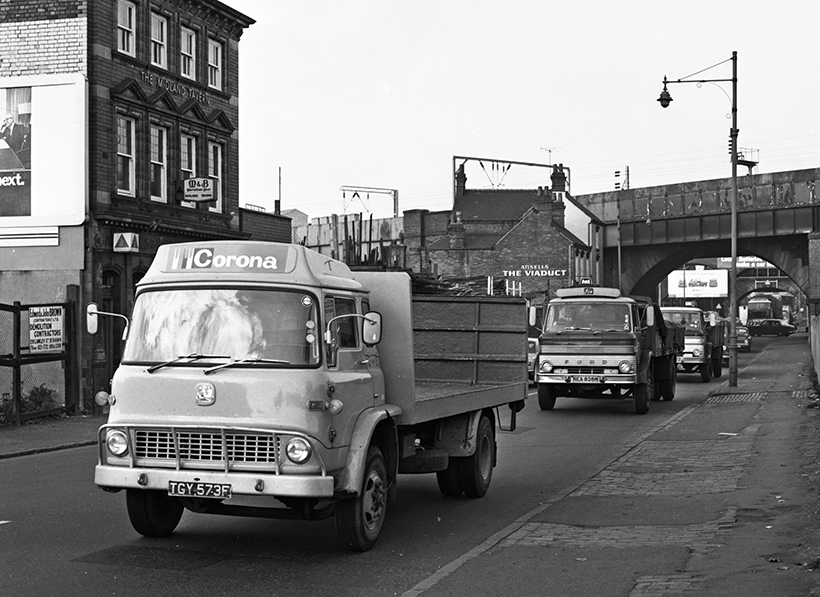 Another image illustrating heavy, commercial traffic in an urban setting, this time in Birmingham, shows a Bedford TK dray, TGY 573F (London, 1968), from the fleet of Corona soft drinks – another name now just a memory. This was being followed by two D Series lorries, with which Ford stole a march on Bedford with their tilt cabs. However, the straightforward TK managed to retain many fans among operators for many years, perhaps well past its ‘sell-by’ date, allowing a way in for the Continentals? 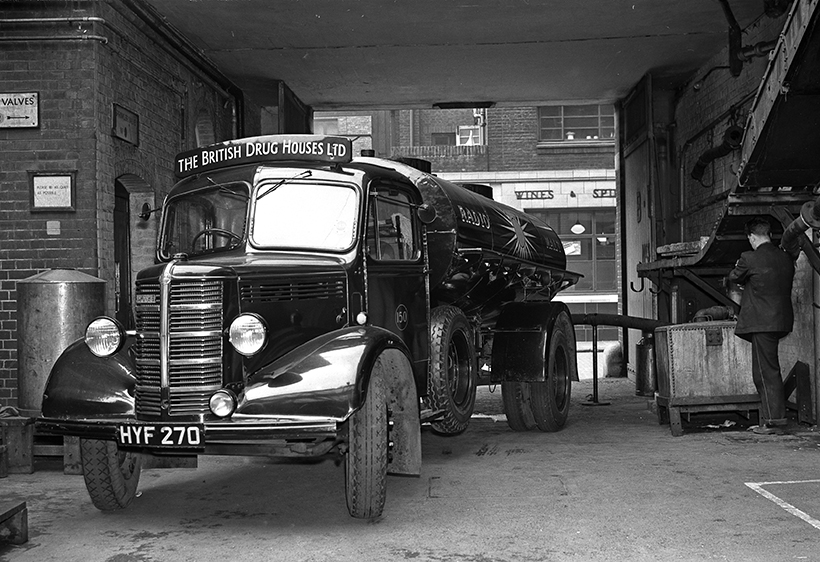 The (not so) humble Bedford OL was to appear in many guises in all sorts of fleets, for many years. This immaculate-looking early example, HYF 270 (London, 1946), was used by The British Drug Houses Ltd, a North London-based wholesale chemists, for the bulk transport of its ‘Radio Malt’, a Vitamin A, B and D mixture it launched in 1927. The BDH name is still used by Merck of Germany, taken over from Glaxo. 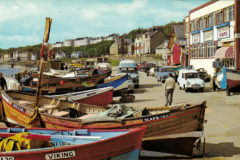 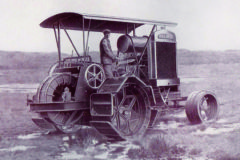