Here’s another evocative selection of memory-packed postcards from Nina Smith’s wonderful collection, to remind us of holidays past, and places we might visit again. 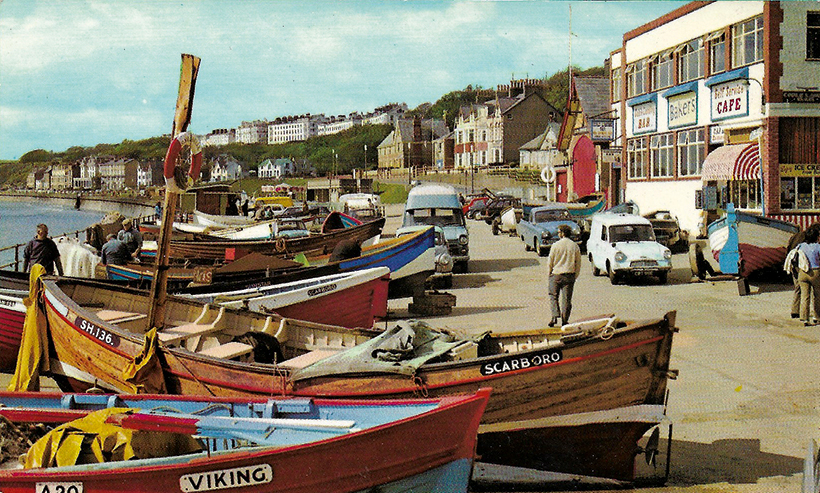 Memory-packed postcards: Fishing boats at Coble Landing, Filey, on the North Yorkshire coast, around 1970 or so. In front of the café there’s a Ford 305E (Anglia) van and an Austin A60 pick-up, plus a Morris 1000 pick-up and early Ford Transit ‘high-top’ van. There’s a yellow Bedford CA van among the cars parked further back, as well.

All the scenes in the postcards shown here include vehicles, which is why Nina has chosen them from her collection for us. As well as presenting views of picturesque places, these memory-packed postcards offer more than a hint of nostalgia.

The locations will be readily recognisable to those of you who know those areas featured while, for others, the pleasant scenes will hopefully act as visual prompts for places you might like to visit in the future. Thankfully, many of the locations featured here, still look much about the same today.

Postcards of this sort were mainly produced to be sold at the seaside and beauty spots. Even today, those currently on sale often seem a little out of date, especially if you take a few moments to look closely at cars and commercials featured in the scenic views. For some people, these vehicles might seem an intrusion on the scenes, but for us they only add to the interest, and act as reminders of the past.

Collecting postcards is a hobby in itself, with plenty of people interested in different aspects. For us, it’s a quick wallow in nostalgia, seeing vehicles of the past going about their daily business. What we might miss in the detail, is made up for by the overall atmosphere created in these vintage holiday scenes. 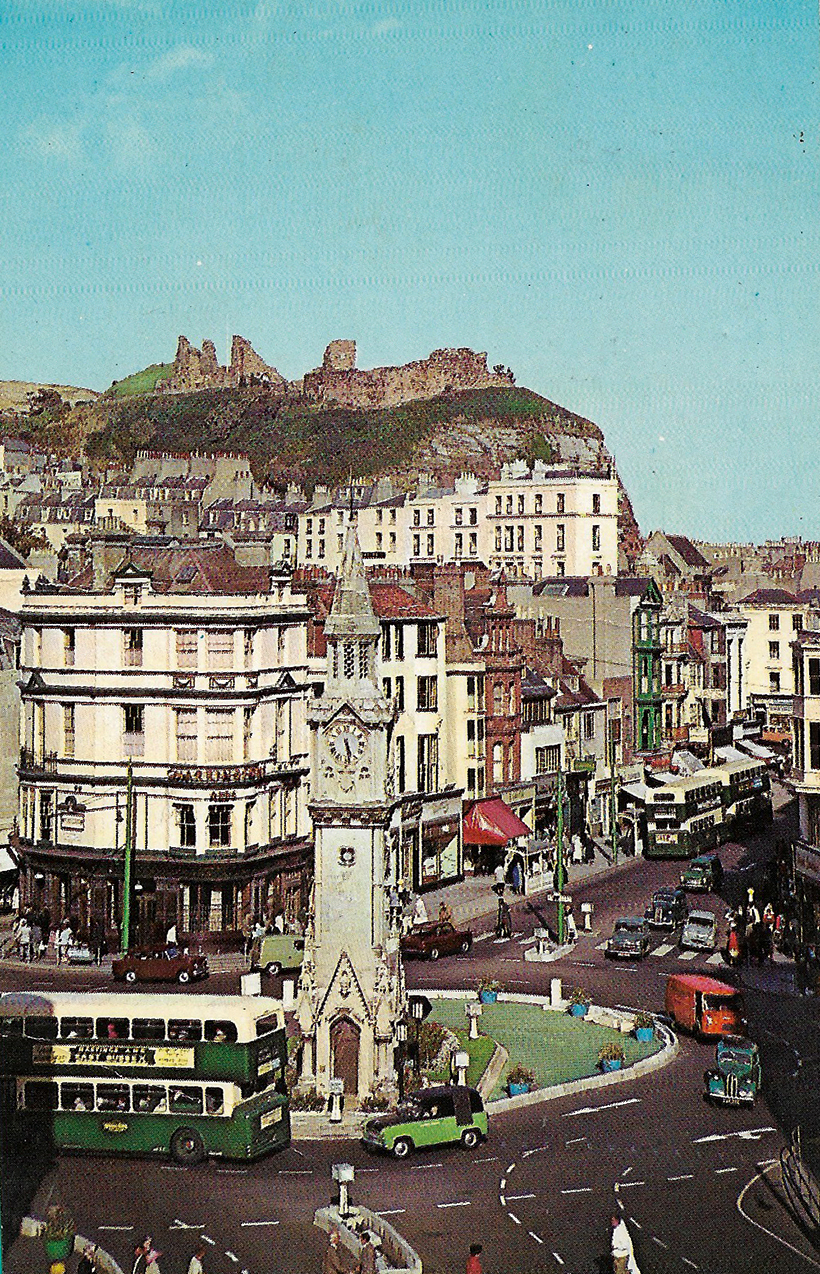 In this 1960s view of Prince Albert Clock Tower in the centre of Hastings, we can see three, rear-engined, Leyland Atlanteans of Maidstone & District, and the Norman castle on the skyline. The other traffic includes three Ford 300E vans and, with its driver’s sliding door open, an Austin or Morris J4, similar to the many used by the GPO from the 1960s onwards, among a number of cars of the period. 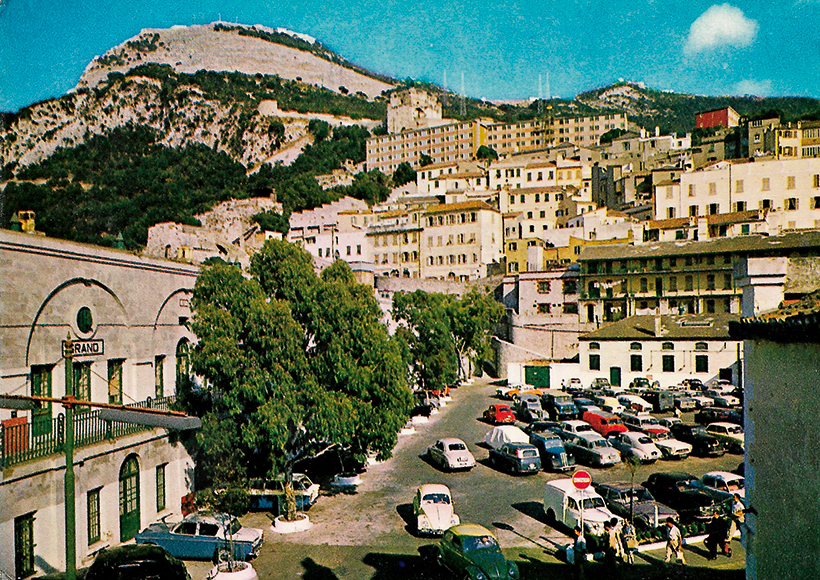 This postcard was based on an early 1960s view of Gibraltar, showing the northern end of the Upper Rock, with the Moorish Castle above the then modern buildings around Casemates Square, now pedestrianised. Then it was a car park, with a Hillman Minx, two Beetles, a Morris Minor van, Hillman Husky, Ford E494C 5-cwt van and, further back, a de-mobbed Austin ‘Tilly’ and Bedford MW 15-cwt – part of a lovely period selection of British cars. There’s a Peugeot 203, Simca Aronde and Ford Taunus to be seen, as well. 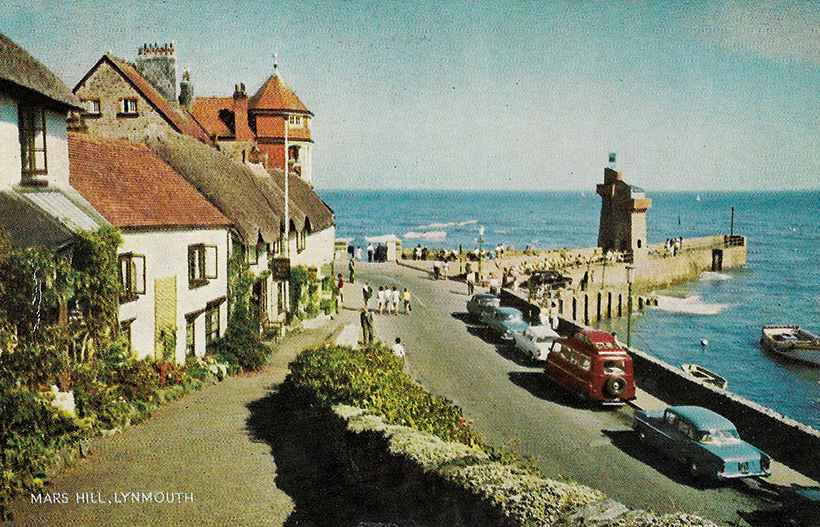 Here we see Mars Hill and the Rhenish Tower at Lynmouth, in North Devon. Of note for us in this early 1960s view, between the F Model Vauxhall Victor and Ford Anglia, is an Austin or Marris J2 with a Calthorpe lifting roof motor caravan conversion. 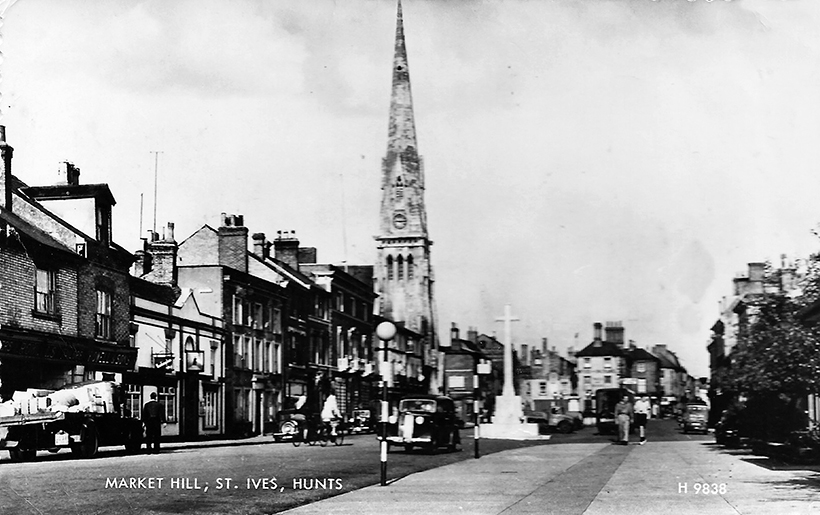 An earlier view of Market Hill, St Ives, Huntingdonshire (now swallowed by Cambridgeshire, of course). We can see several, pre-war cars, including a Vauxhall and Morris, a platform lorry on the left delivering parcels, perhaps for the railway, and a wartime Bedford OW beyond the cross. 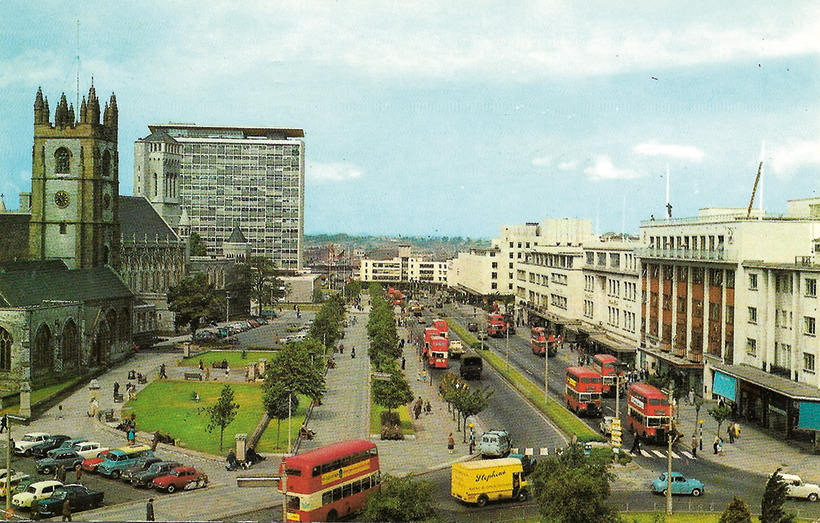 A bit of civic pride now, with an early 1960s view of Royal Parade, Plymouth. The post-war re-building after the wartime bombing, had created a spacious scene, which still remains outside the Minster Church of St Andrew on the left. There are around 11 of the many MCW Orion-bodied Leyland PD2 buses in the Plymouth fleet on view, along with a BMC LD van of Stephens, a local purveyor of bread and confectionery. An army lorry was passing some of the buses, while the car park on the left hosted a Bedford Dormobile among lots of contemporary types of car. 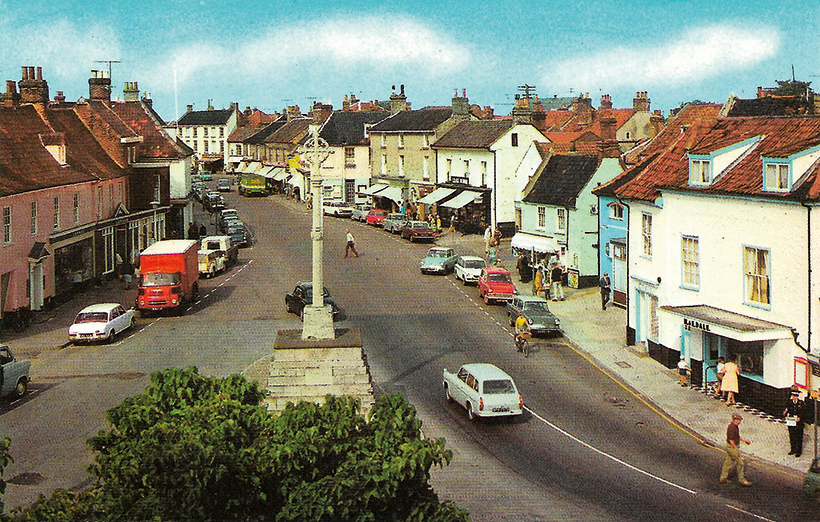 A late 1960s view of the Market Place in Holt, North Norfolk, now known for its connection with the North Norfolk steam railway. As well as a number of cars, including Ford 105E Anglias – a now rare estate version to the fore – a couple of BMC 1800s, another Hillman Husky, Morris Traveller and Land Rover, there was an Austin or Morris FG box van, on which you can just make out the name ‘Mackintosh’s’, as in toffees, and another box van delivering further up the street. 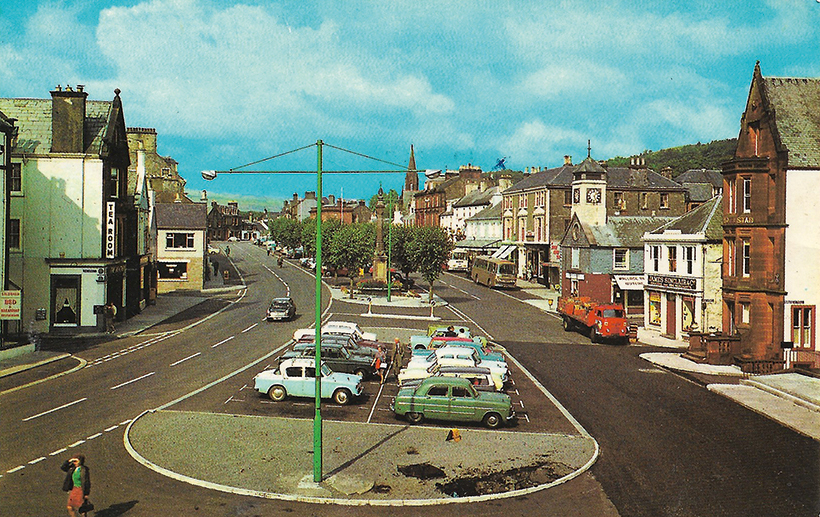 Here’s a scene in the centre of Moffat, Dumfriesshire. The parked cars include a Hillman Minx and Ford Zephyr Mk I. There’s a strange road layout, with a Morris 1100 on a two-way road to the left while, to the right, a late ‘facelift’ Commer QX was delivering beer or soft drinks and two coaches, which look like one of those AEC Reliances with centre-entrance Plaxton bodies of Glenton Tours and a Harrinton-bodied Leopard of Ribble, make a refreshment stop on the parallel carriageway. The A74(M) now by-passes the town completely, but I expect the tea rooms still get some passing business. 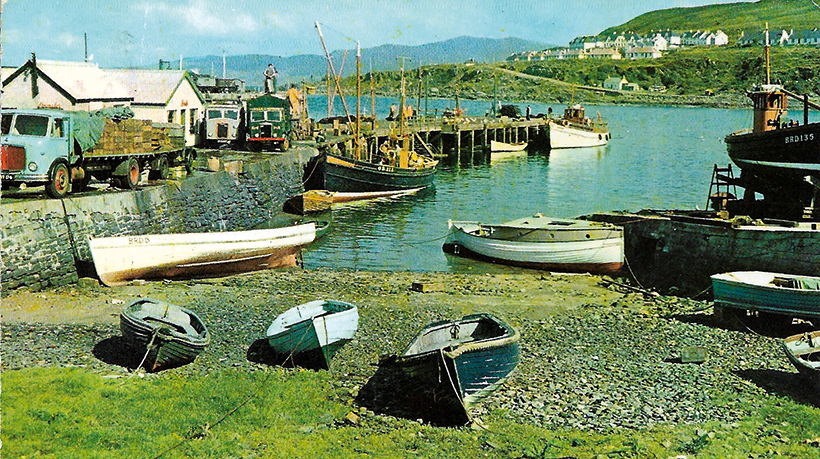 Staying in Scotland, with a late 1950s view of the harbour at Mallaig, Inverness-shire. Unfortunately, the photographer was a bit more interested in the fishing boats than the lorries taking away the catch. There’s an AEC Mercury, almost obscuring an Austin K Type behind it, a Dennis and an Albion, fitted with a substantial front bumper. It was felt significant enough to state that this was ‘a real colour photograph’ on the back, rather than the hand-coloured efforts so common in those days. 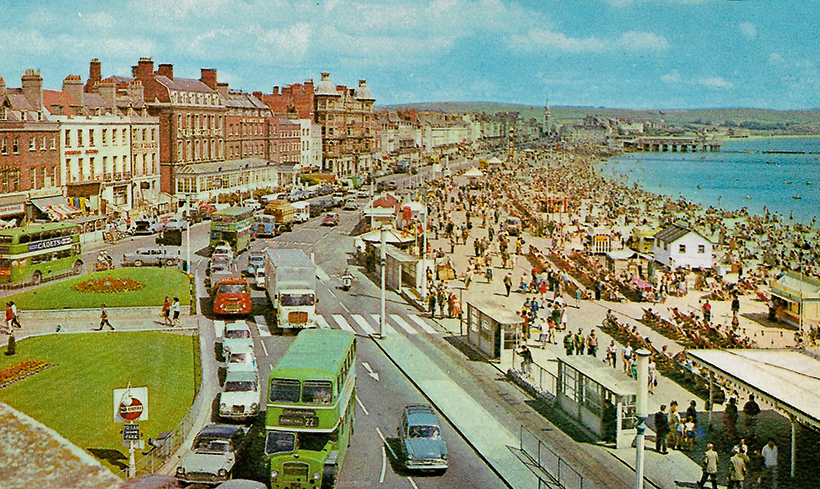 Weymouth has always been a popular seaside town. This mid-1960s view of the Esplanade shows the beach crowded with holidaymakers, and an equally busy road with most of the traffic heading from the coast road through the town. Prominent is a Western National Bristol Lodekka, with two older Bristol K Types further back. Flanking the Lodekka, we can see a Hillman Husky, a Vauxhall Cresta PA and a Riley 4/72 Farina. The bus is being followed by an AEC Mercury artic box van, maybe a supermarket’s, next to a red Austin or Morris FFK. Further back is an artic loaded with timber, at first glance an Atki, but actually a Seddon, with a Bedford CA ice cream van behind that. 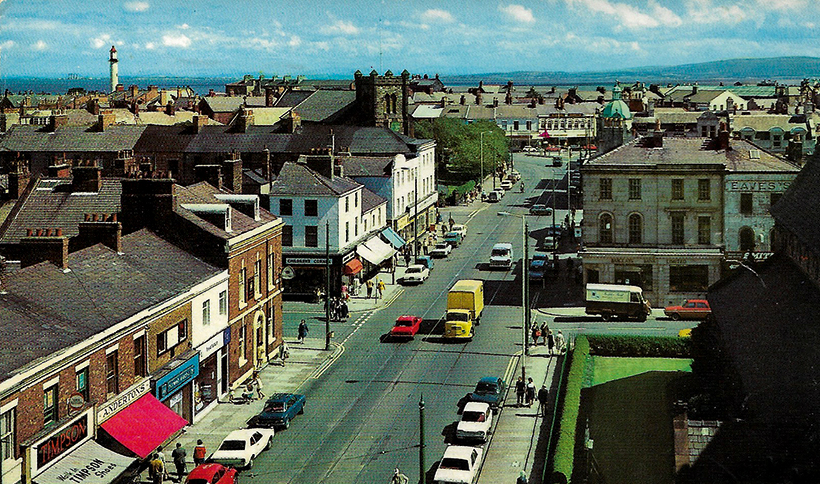 This is Lord Street in Fleetwood, one of the main streets in the town, where the vehicle rally was held for many years. This view dates from the early 1970s. Points of interest include the Pharos Lighthouse and the tram tracks at the northern end of the Blackpool system. The vehicles in view include a Karrier Bantam artic van in National Carriers yellow, followed by an early Transit and a BMC ‘EA’ van in the side street, plus plenty of cars of the time, including a Ford Cortina, Hillman Imp and VW Beetle. 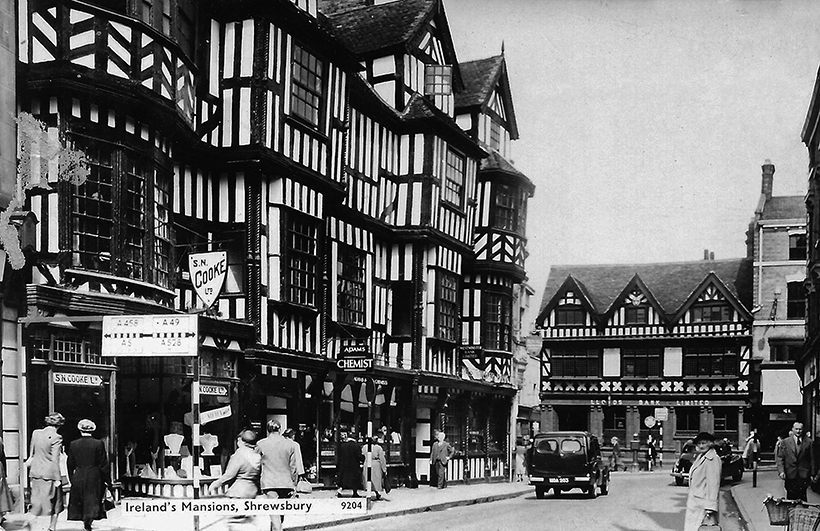 A black and white view of Ireland’s Mansions, a 16th century wooden building, now Grade II-listed, in High Street, Shrewsbury, dating back to the 1950s, with a rear view of a now rare, Morris ½-ton van and an Austin A40 Devon turning the corner, behind the lady on the right. 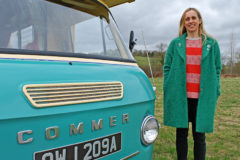